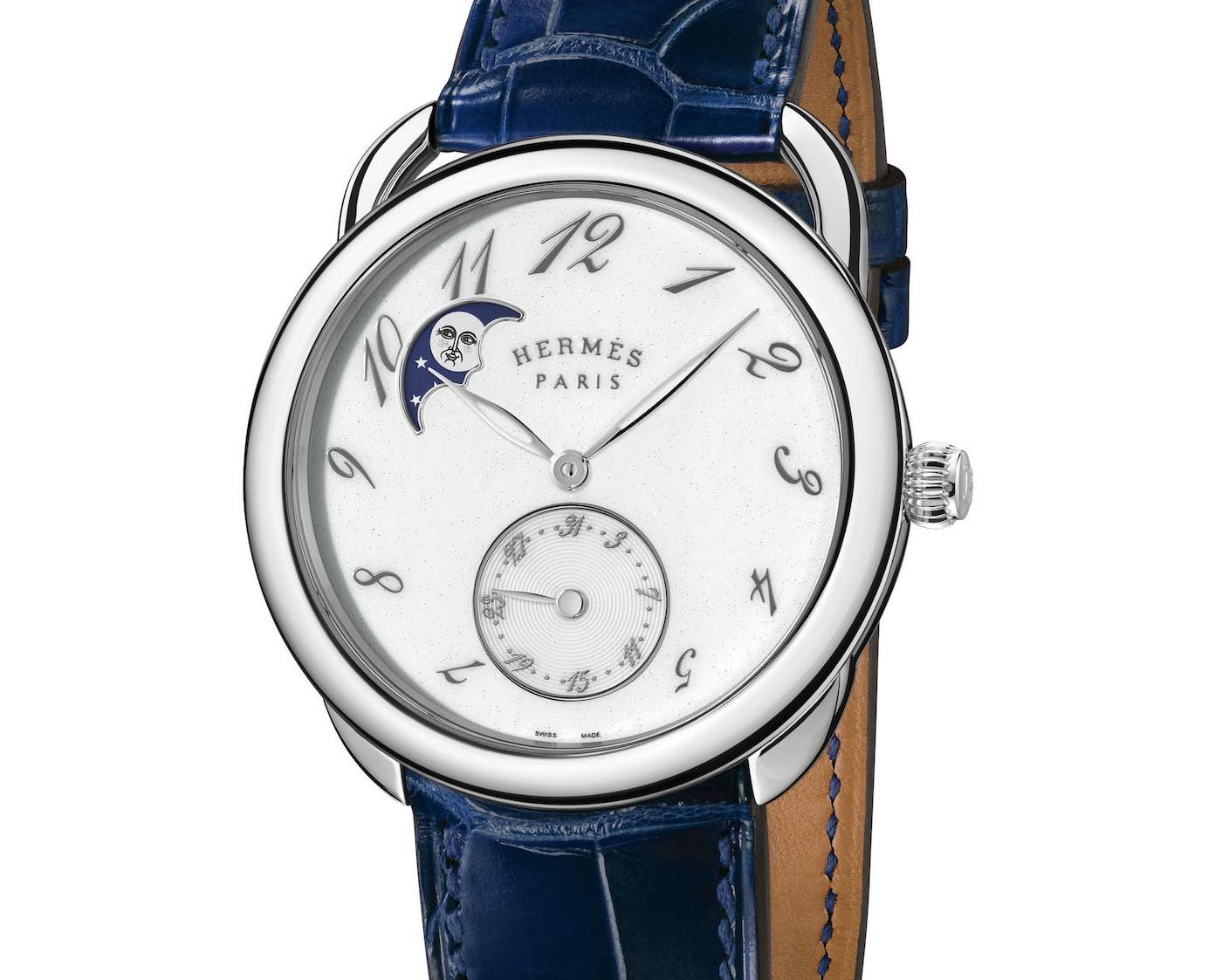 Doing anything different that doesn’t smack of trying too hard is really tough in the world of watch design. In 1978, Henri D’Origny did just that. And the Hermès Arceau Petite Lune is the perfect expression of that genius. 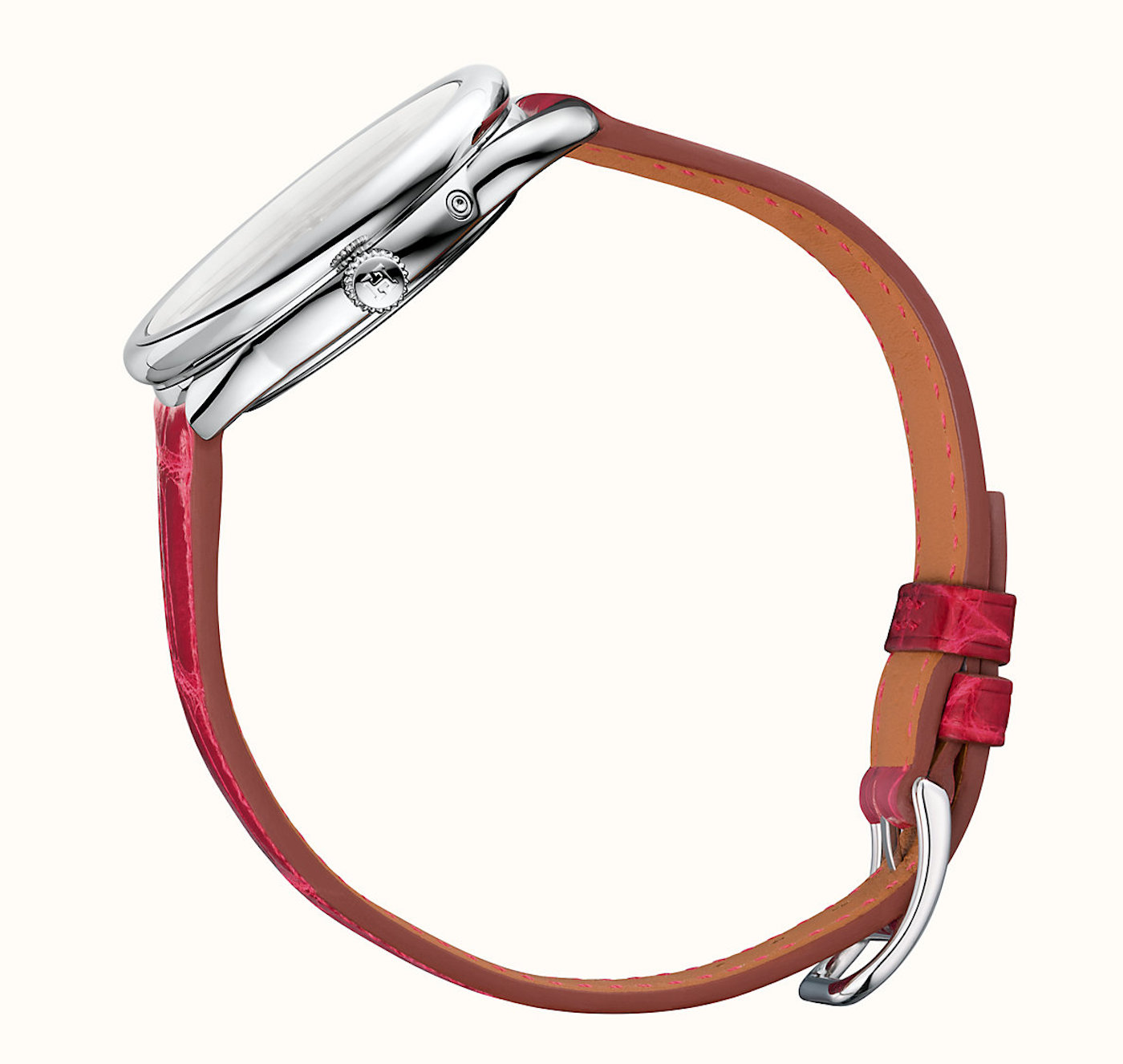 The Hermès Arceau family of watches is known for three things: its asymmetrical lugs, its sloping dial, and its slanted Arabic numerals, which are supposed to communicate the speed of a galloping horse. The latter reason is the whimsical justification of an elegant typeface (nicely applied here through powered transfer); the second improves legibility but does little to alter the head-on character of the watch; the former, however, is an absolute masterstroke of design. 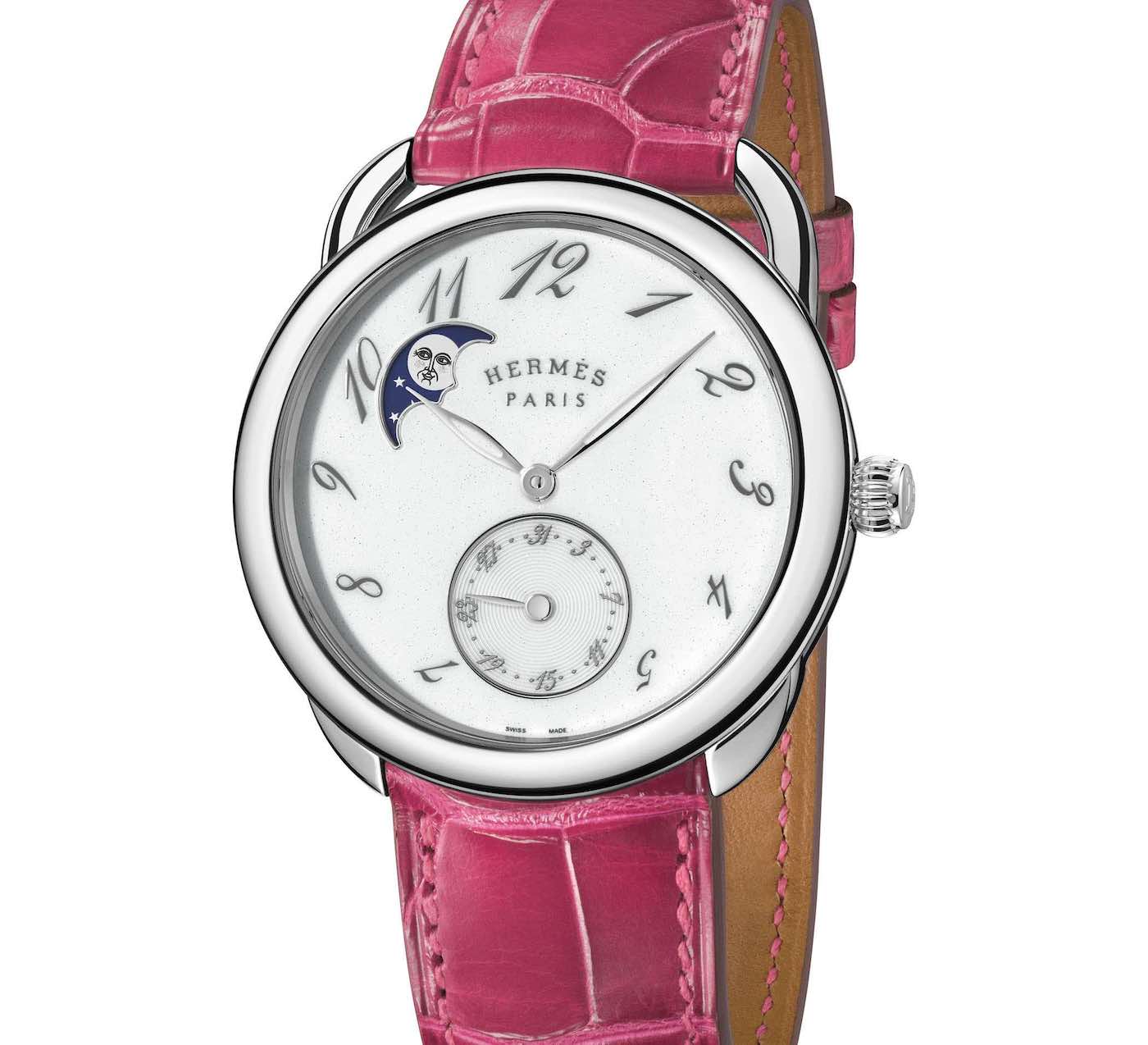 Not only does it give the Hermès Arceau watches a unique silhouette, but it also ensures a snug fit to the wrist. This lug form is particularly useful for Hermès’ larger, more complicated watches as it keeps them wearable. The Hermès Arceau Petite Lune may not be the largest watch from the French brand, but at 38mm for a ladies timepiece, it is not the most diminutive either. 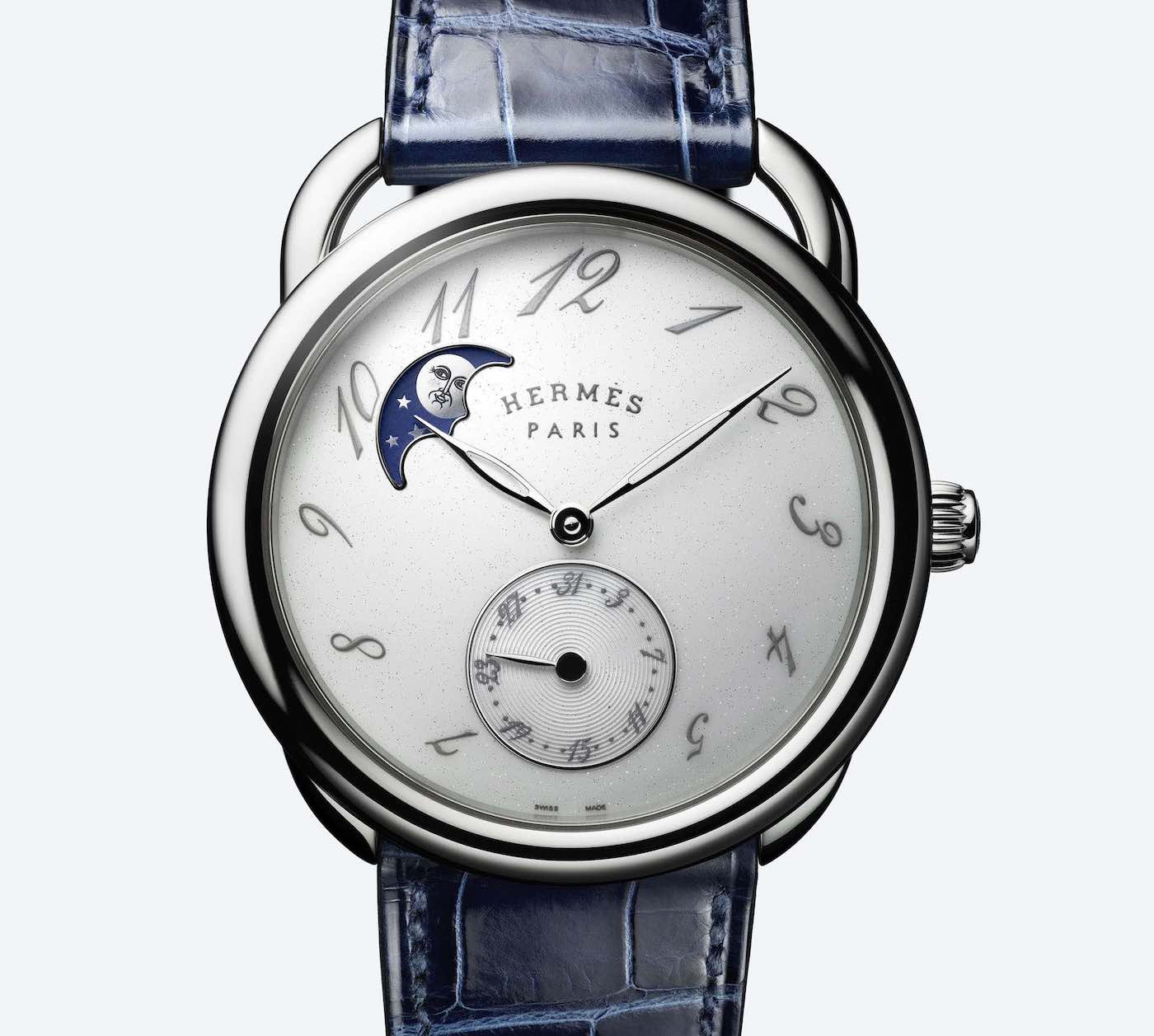 With the release of the Hermès Arceau Petite Lune, the Arceau collection gets a brand new watch that widens the target demographic by reducing the diameter but not the level of horological interest. It is nice to see a brand that is too often dismissed as a fashion brand dig in its heels and release such a tasteful and mechanically interesting watch. 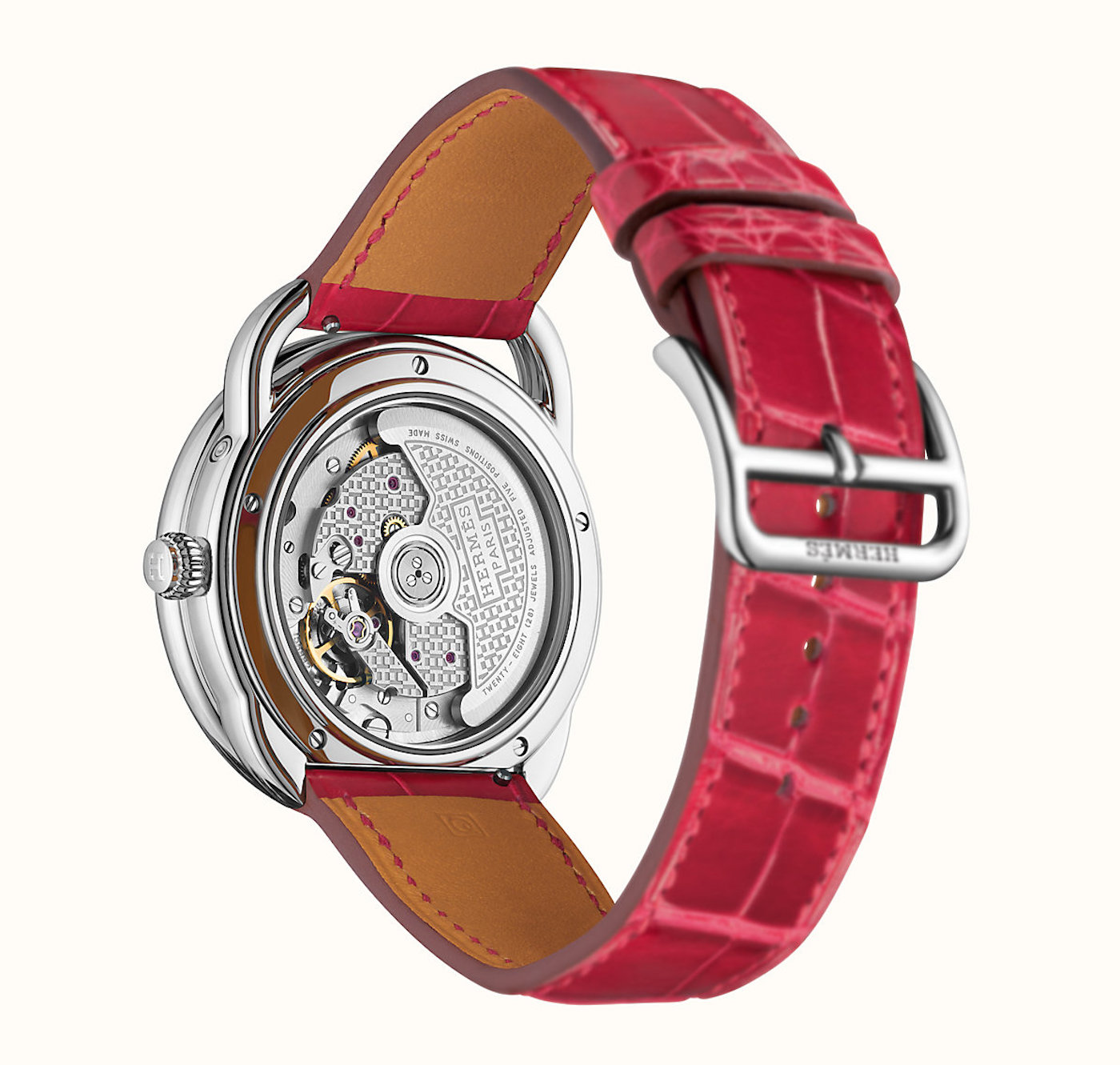 This new release sees a totally new dial released alongside two case options and a wealth of opportunities to accessorize your new timepiece. The silvery, opaline dial is in stark, muted contrast to the far more overtly feminine mother of pearl we’ve seen before. If you look at this dial really, really closely, you’ll be able to see that it is decorated with little tiny flecks of silver that catch the light. I’ve not had this watch on my wrist, but I’d wager it would give out some serious sparkle. 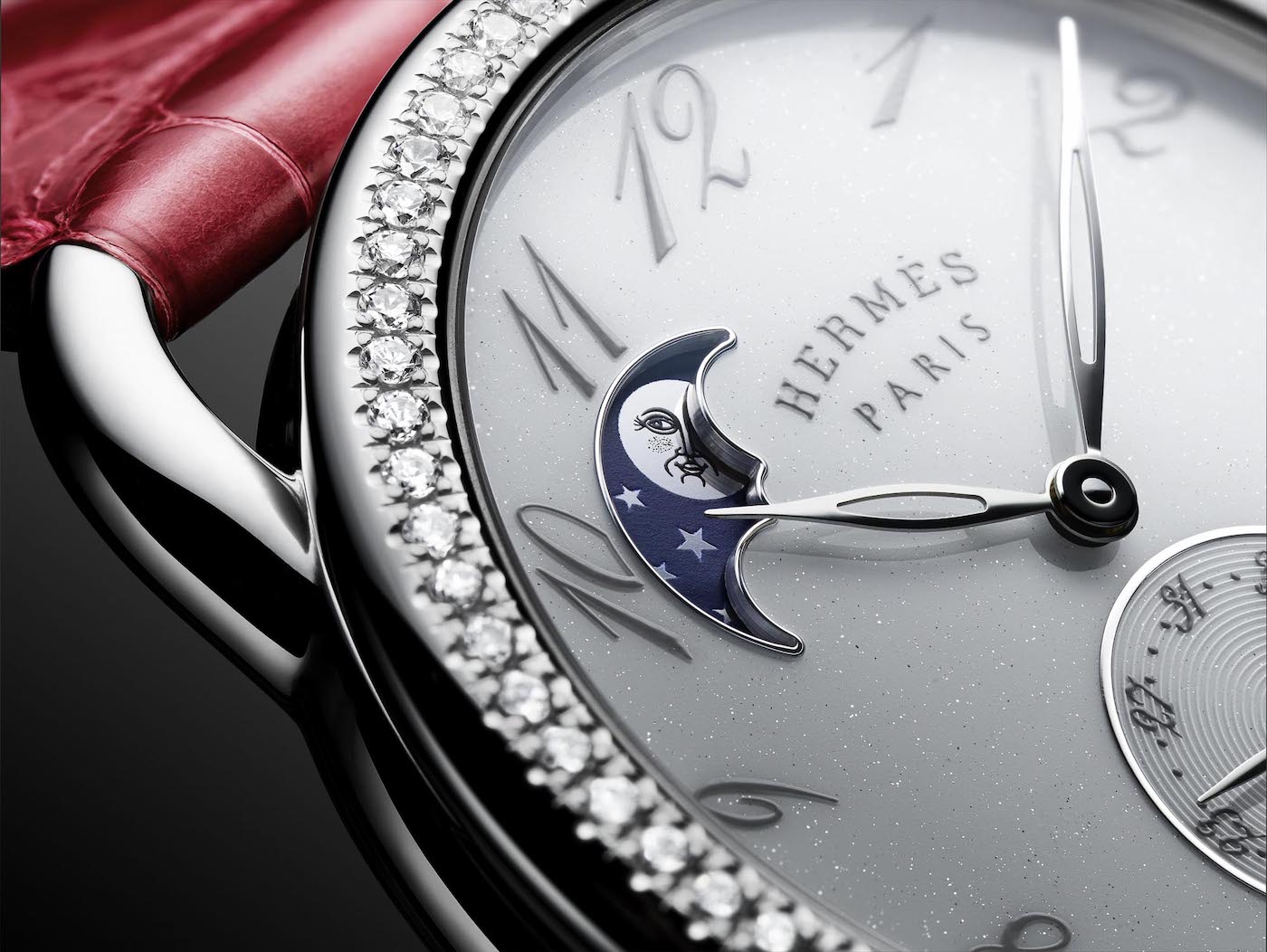 The stainless steel case is available in two styles — either polished or set with 70 diamonds, amounting to a total carat weight of 0.81. Once that decision has been made, you’ll be presented with a cavalcade of leather bands to choose from. I’m not kidding — there are ten options: matte alligator in either etoupe or Chantilly, or polished alligator in ultraviolet, sapphire blue, black, elephant gray, raspberry, orange, ember alligator, and polished black currant alligator. It pays to be thorough, I suppose. 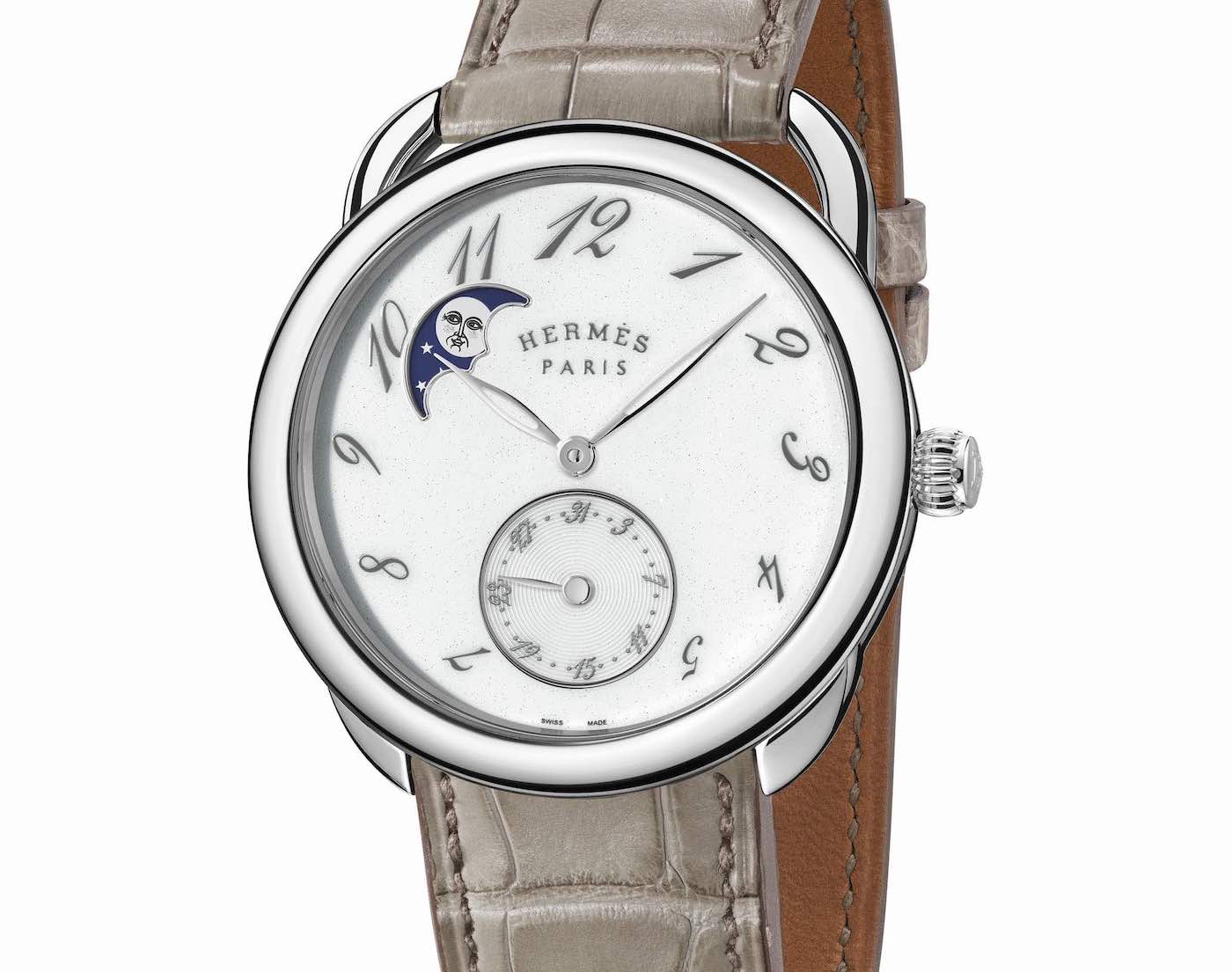 The Hermès Arceau Petite Lune is powered by the manufacture caliber H1837. Features include a modular moon phase complication and a date, indicated via the 6 o’clock sub-dial. The pointer date is a nice touch. It allows the dial to remain balanced and for all the typography to remain on the same page, as it were. A date window might have broken up the tranquil, feminine dial, and made proceedings unnecessarily masculine. 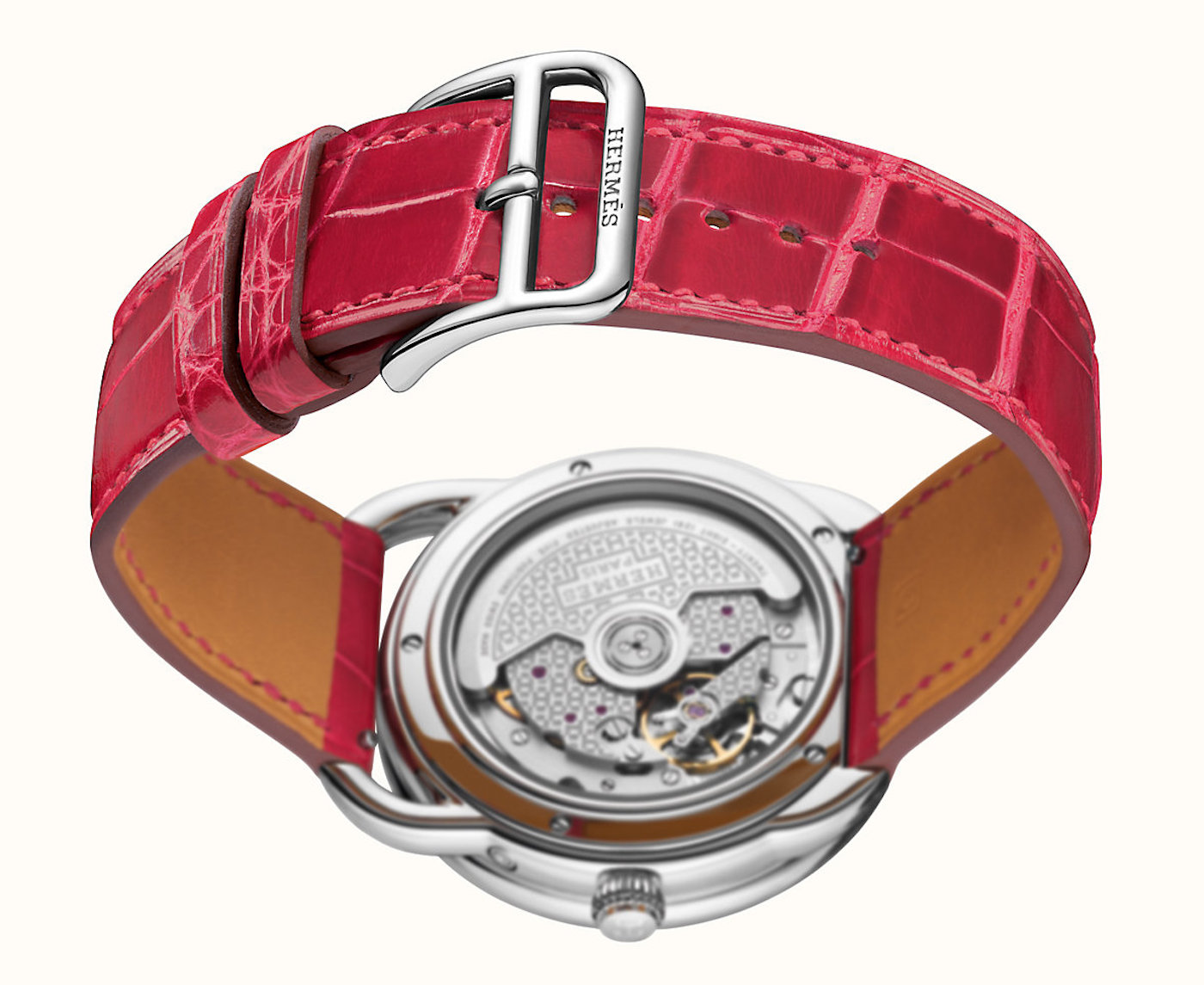 The Man in the Moon

Without a doubt, the star of this show is the cheeky little moon face that can be seen pouting at the world from the press shots included in this article. This is a direct call back to an Hermès scarf named “Acte III, Scène I, la Clairière…” This particular style of moon face was designed by Franco-German artist Édouard Baribeaud, who was openly inspired by Shakespeare’s A Midsummer Night’s Dream. 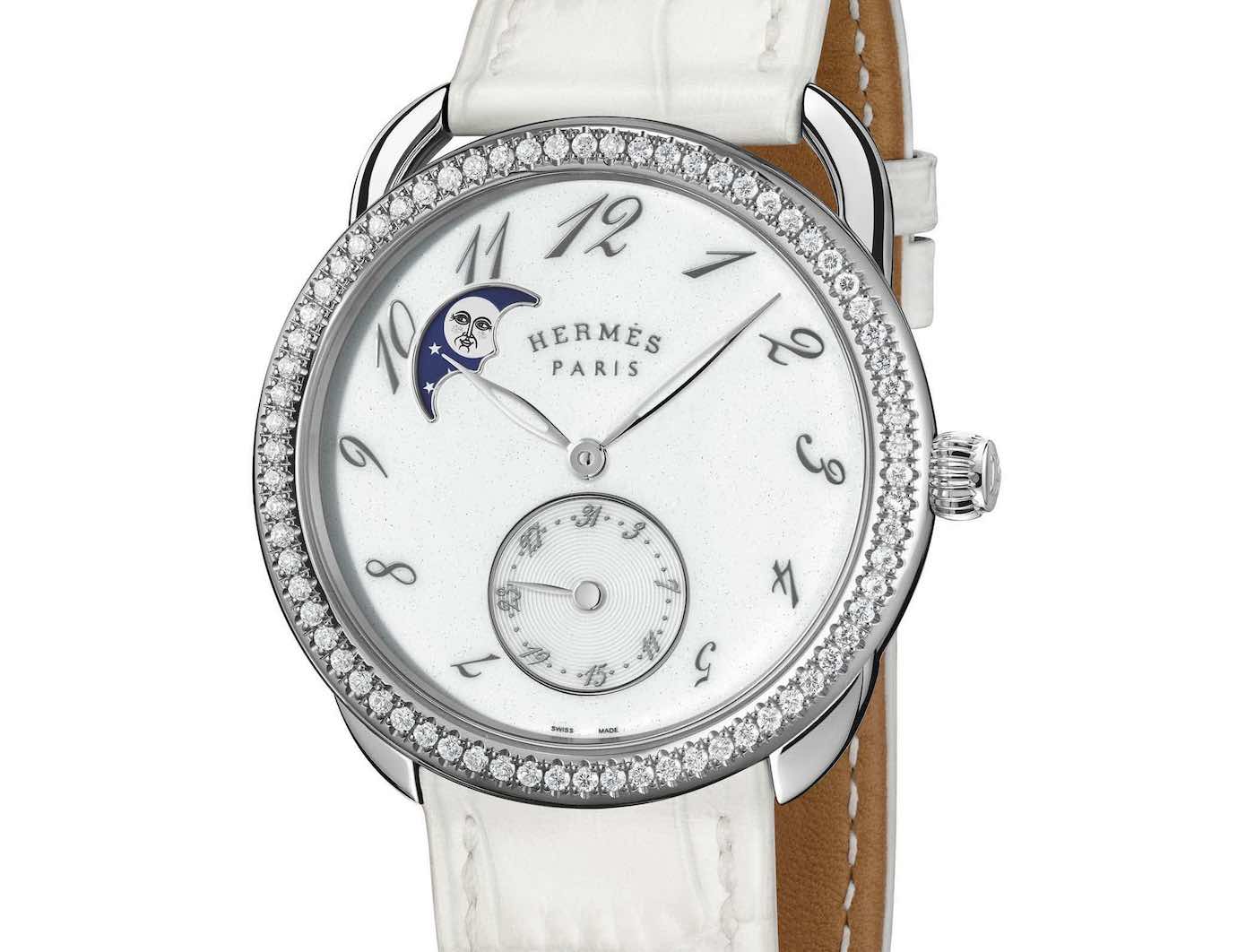 The new Hermès Arceau Petite Lune is a positive addition to an already wide collection. Releases of this nature really underpin the brand’s desire to be taken seriously as a watchmaker. And it is about time. Hermès has been producing quality watches, often with high-level complications, for years.

One of the nicest things about this new release for me is the fact it is in stainless steel. It makes sense from the brand’s perspective, but it does have the look of a watch that could very well have been conceived in white gold (especially with the addition of the diamond bezel). Although prices for these new models are not yet, we can speculate that they will be in the same ballpark as the existing mother of pearl dial model (which features 60 larger diamonds on the bezel, amounting to 1 carat). The current Hermès Arceau Petite Lune with a mother of pearl dial retails for $8,600 without diamonds and $18,350 with. The new models, and associated pricing, will become available available in September. Learn more at hermes.com.