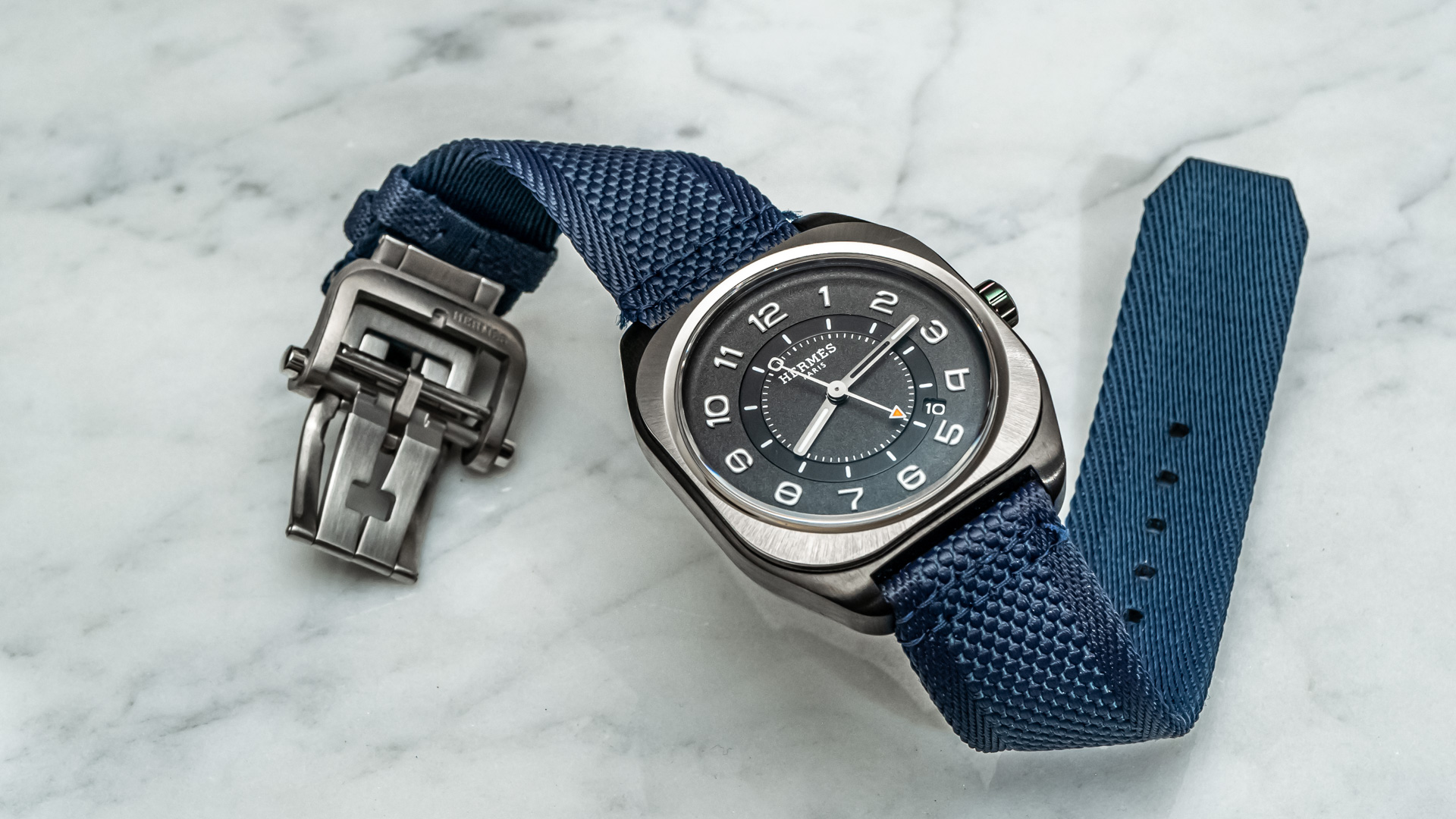 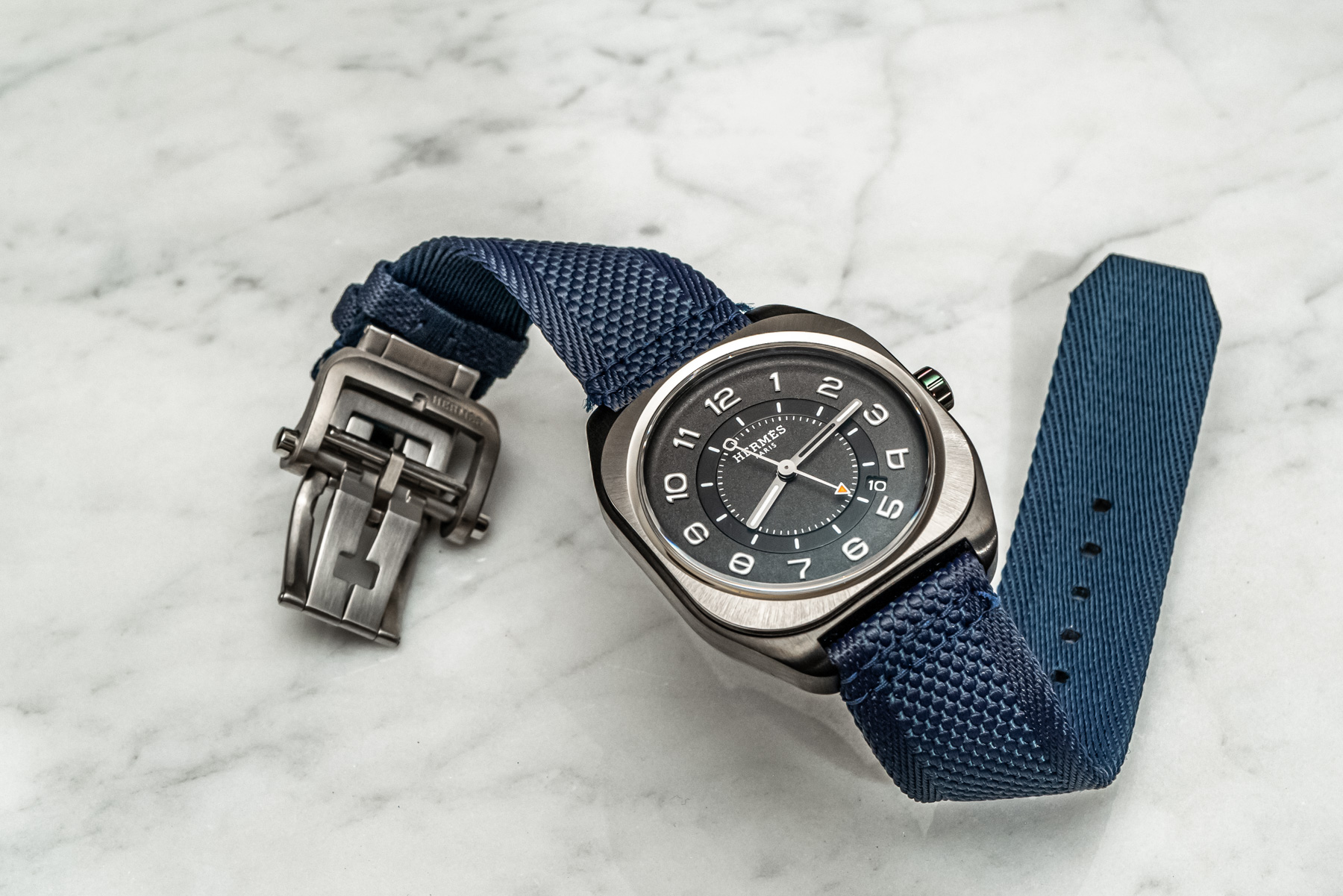 Hermès has invested considerable resources in developing its watchmaking division in recent years, and they have just released an all-new men’s watch collection for Watches & Wonders 2021. The Hermès H08 fills in one of the most glaring gaps in the brand’s catalog by offering a casual everyday watch that’s versatile and tough but still has that uniquely Hermès quirkiness and style. 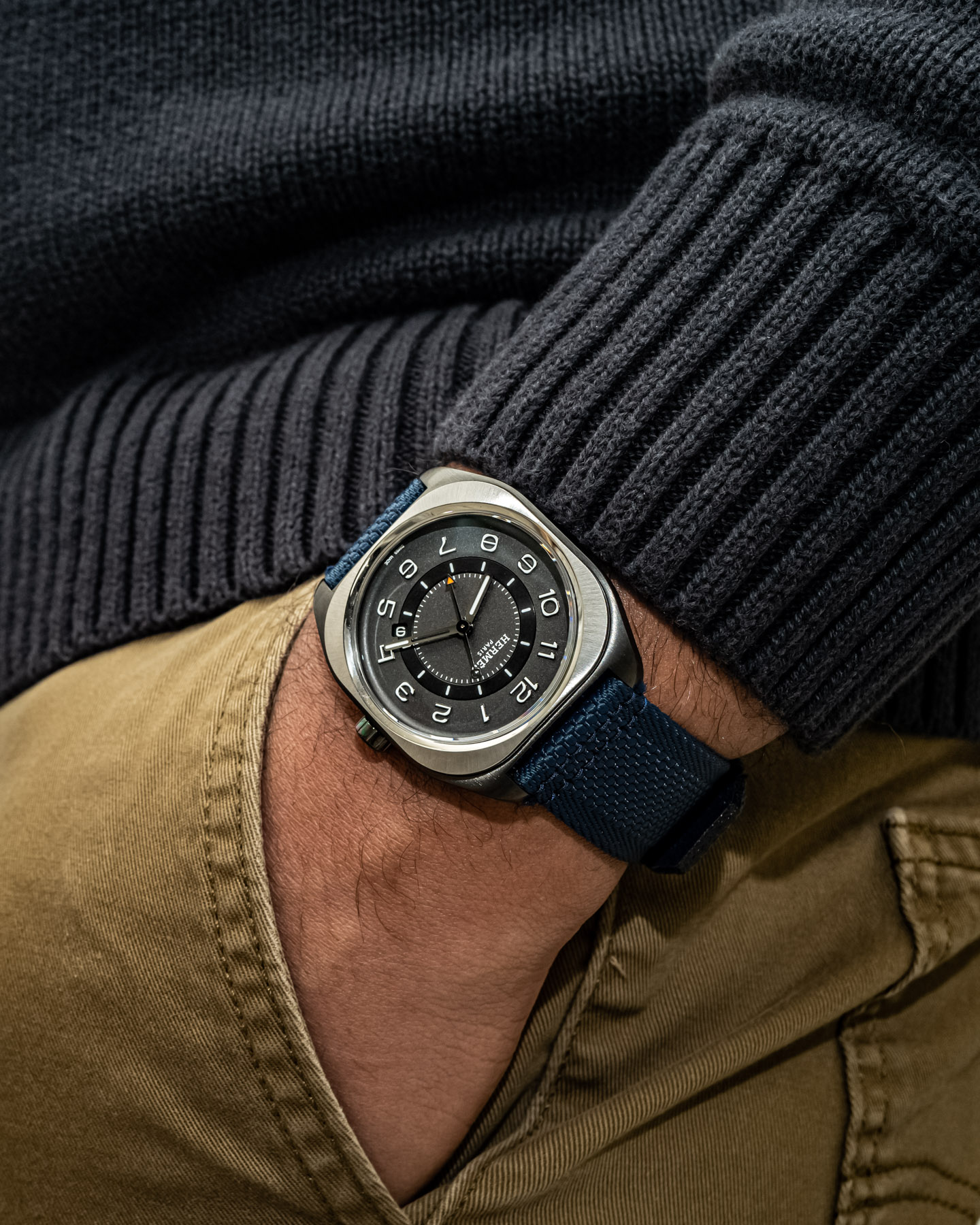 The totally new case of the Hermès H08 feels like a younger sibling of the Carré H that sheds some of the eccentricity in exchange for more mainstream design choices. Rather than having wire lugs (which I personally love) and a perfectly square case, the H08 goes with a more everyday and versatile design with more traditional lugs and rounded edges. Hermès isn’t billing the H08 as a sports watch (which it really isn’t) but rather as a balanced “all-terrain” piece that won’t feel out of place with a t-shirt and shorts or with a suit. The lightweight titanium case, comfortable and well-constructed strap, lumed hands, AR-coating, and yes, 100M of water resistance, back this up pretty well. 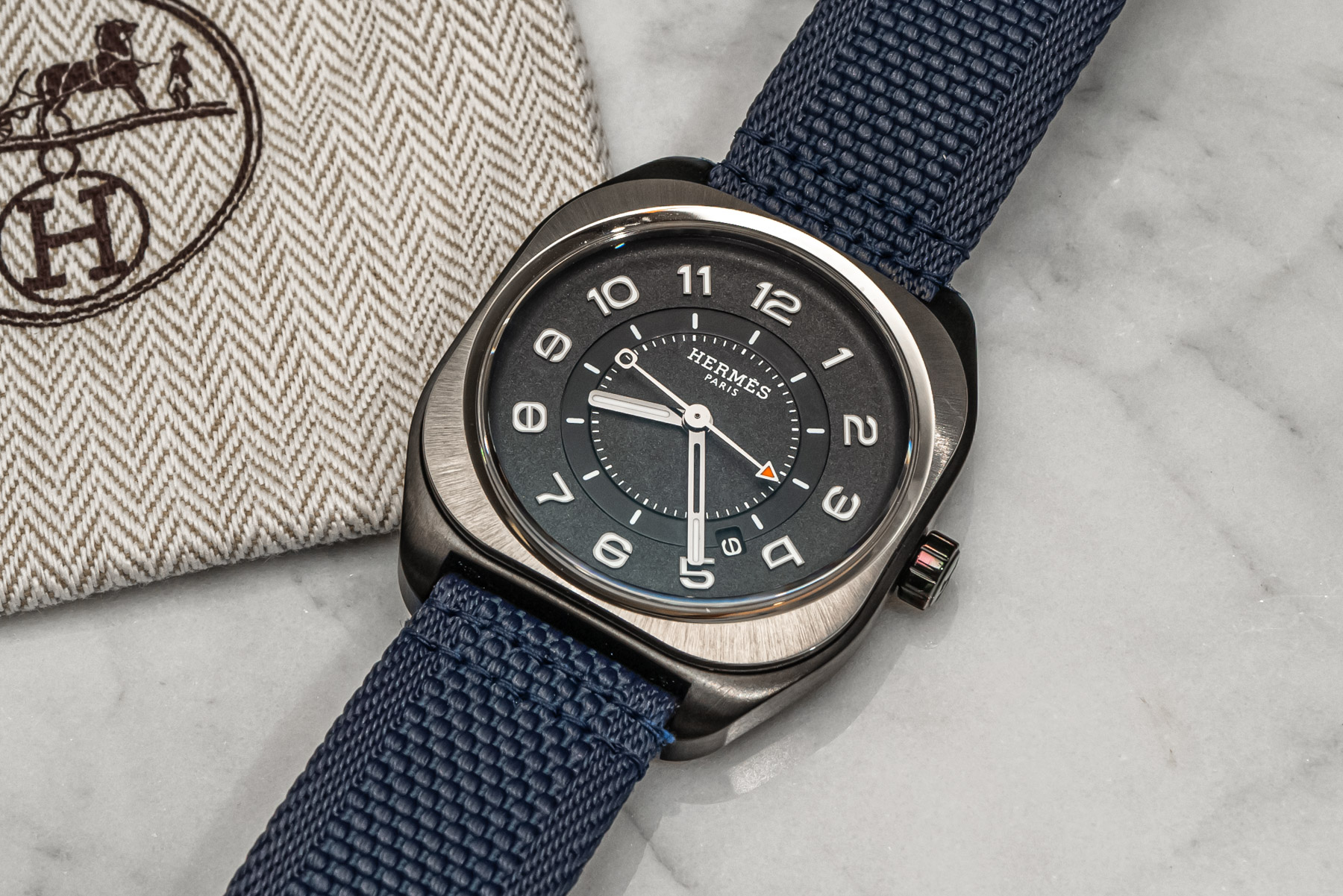 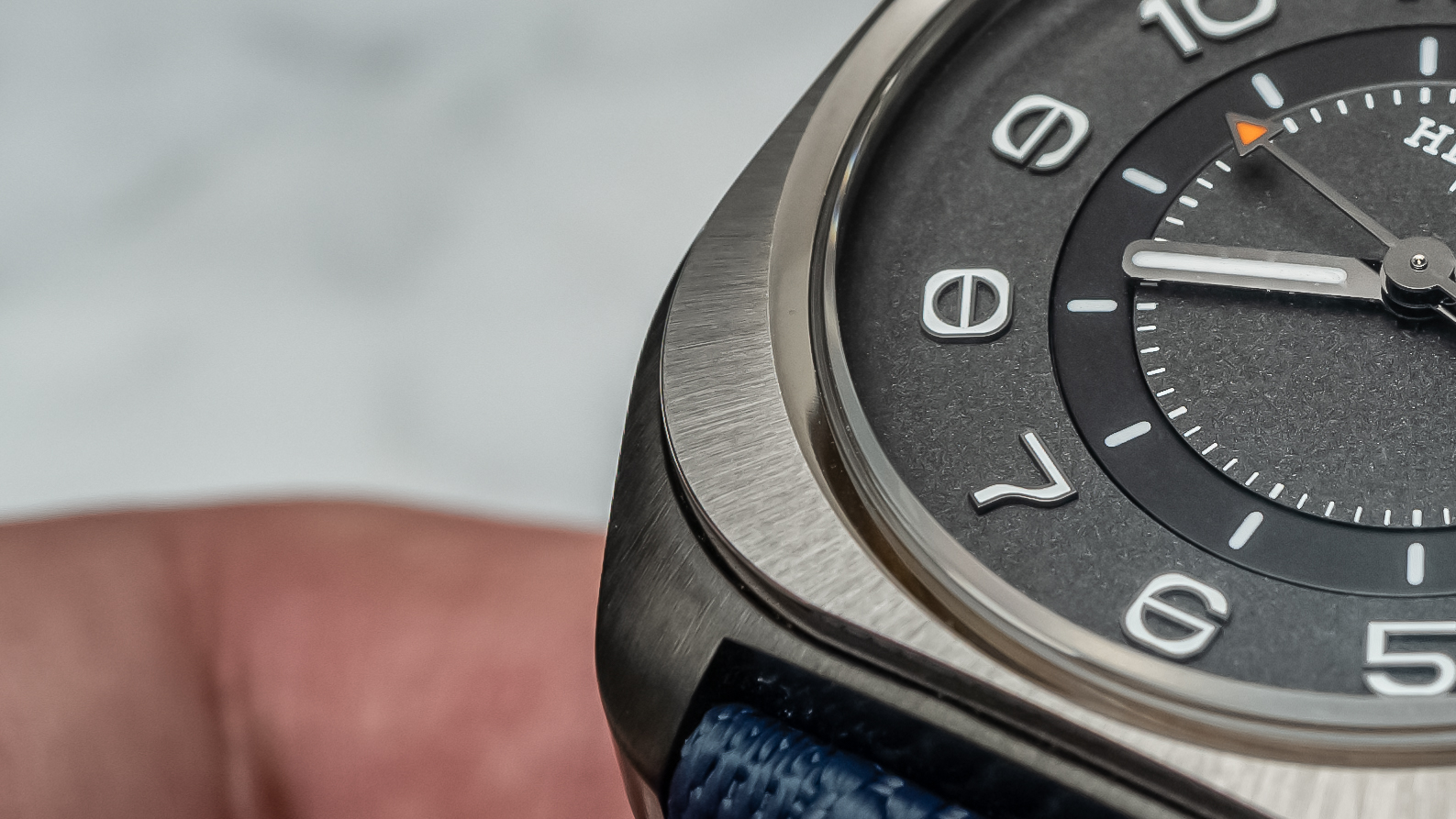 The Hermès H08 comes in three varieties: classic titanium; a black DLC-coated titanium (which is the one I went hands-on with here); and a Graphene case. While I didn’t handle the Graphene model, I’m intrigued by its use, as it’s a material I’ve only seen used once or twice in the past by Richard Mille (and that was on a$1,000,000 watch). An allotrope of carbon, Graphene is a sixth the weight of steel and 200 (!) times stronger. I’d love to get my hands on this model soon. 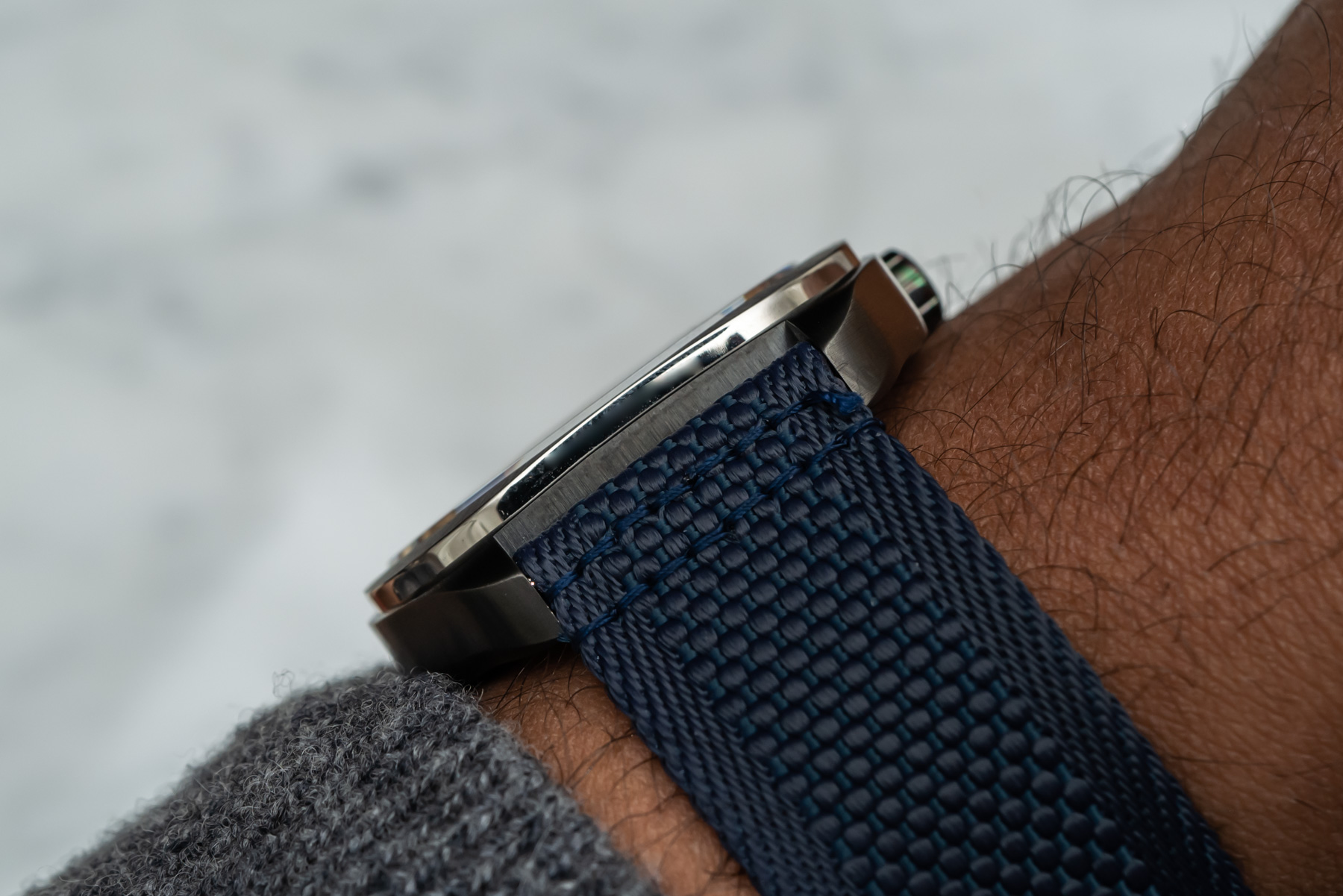 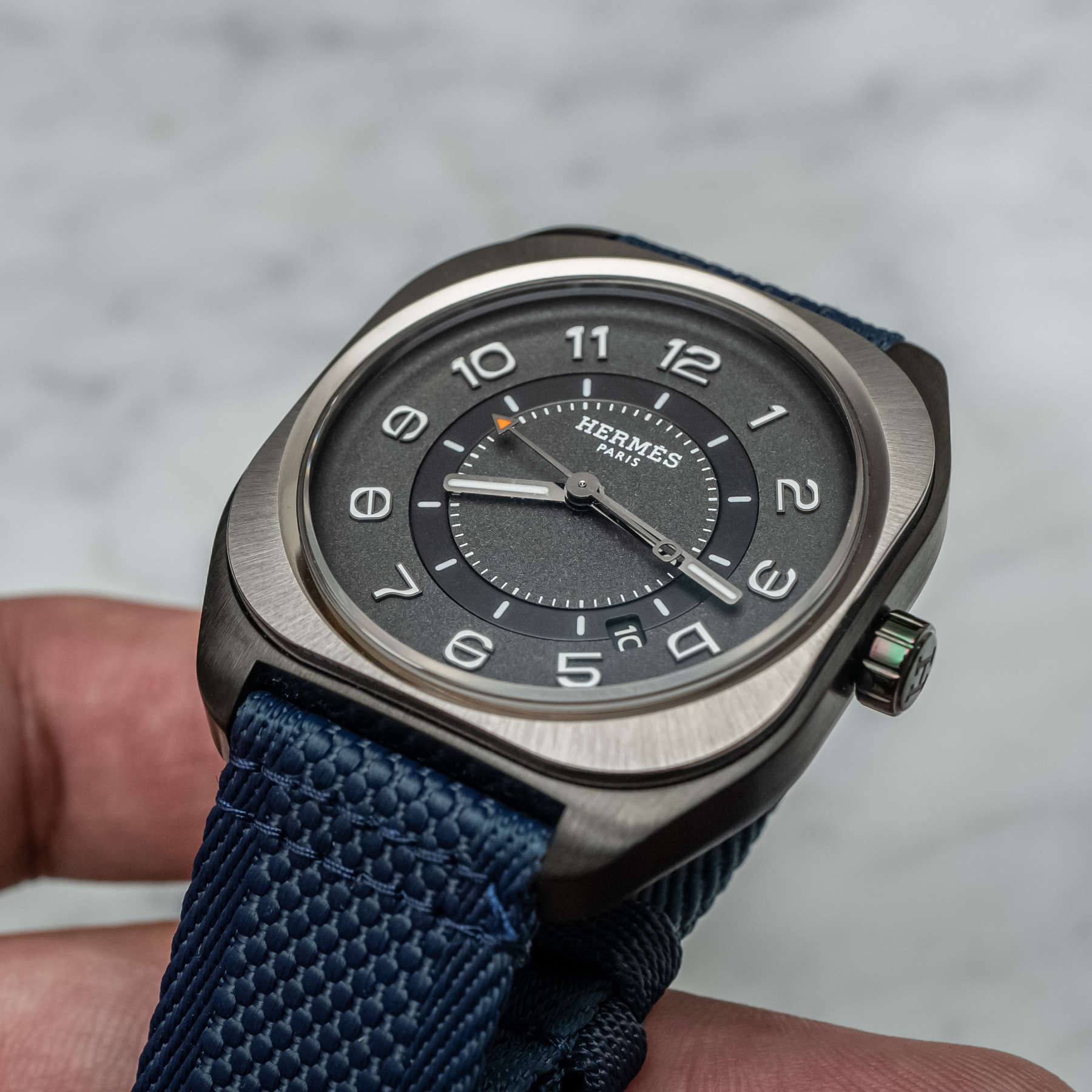 It’s interesting that Hermès is marketing the H08 specifically as a men’s piece rather than the increasingly adopted unisex category, but I do understand why a brand that’s so ubiquitously a fashion house before a watch brand feels the need to categorize. Also, the case is on the larger side measuring 39 x 39mm, which is typically pretty large for a square watch, but the cushion shape, rounded edges, and short lugs keep it from feeling too extra. I wore the watch for maybe an hour before really getting into the specs, and if you’d asked me to guess the size, I probably would have landed on 37.5 or 38mm. 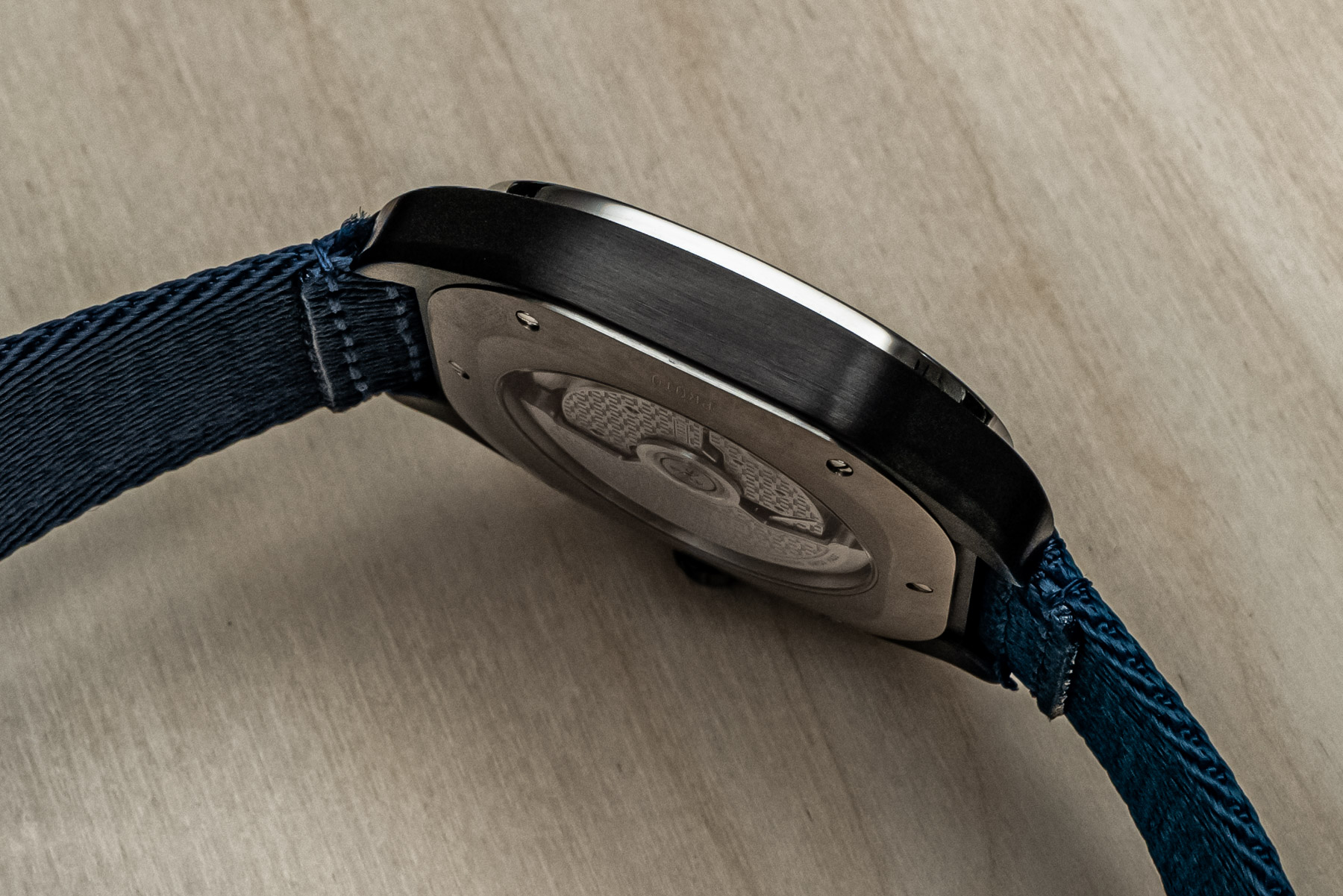 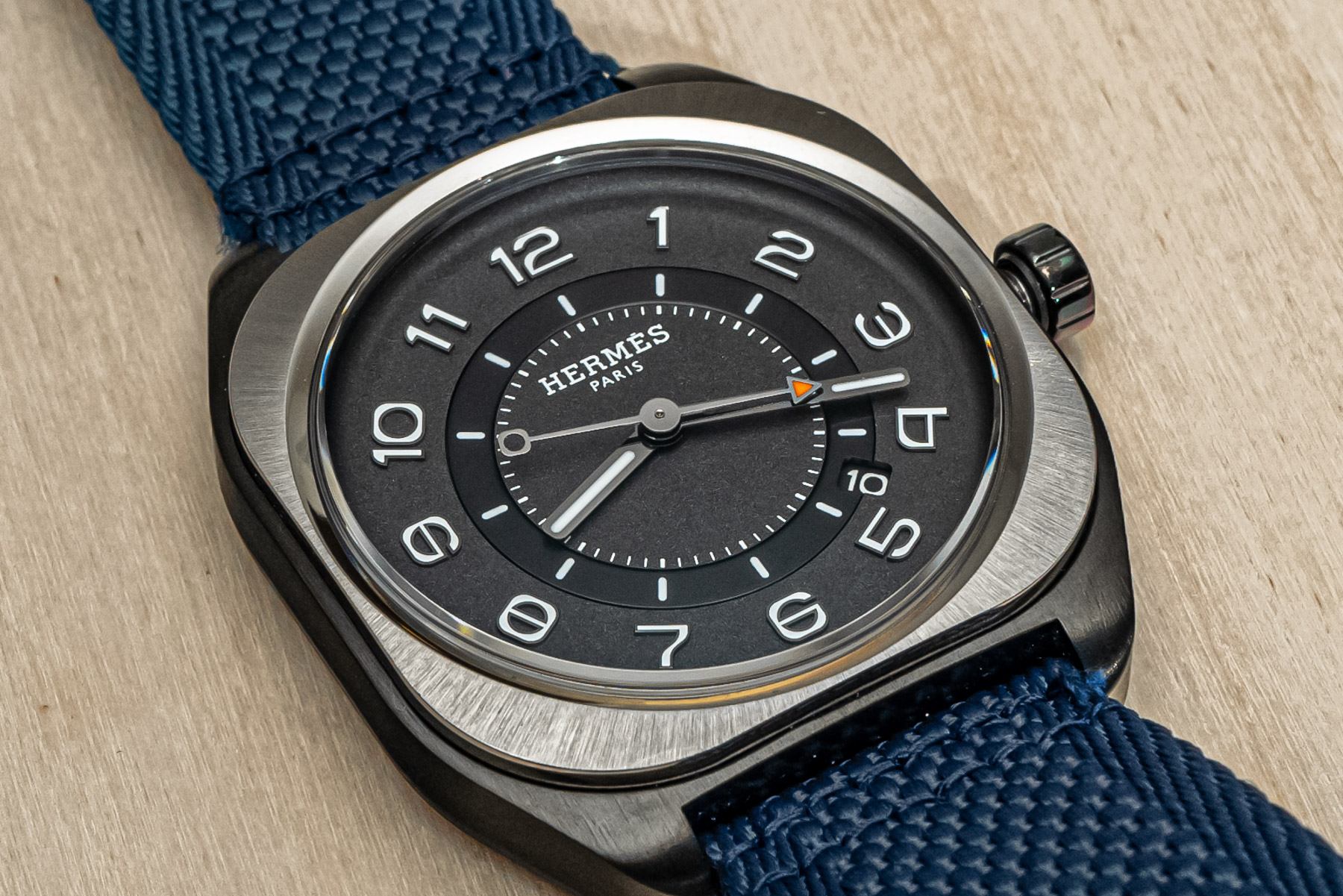 The bezel has nice satin brushing on the titanium and you’ll notice mirror-polished chamfering done along the edges. On this model there is DLC coating along the sides of the case though if you’re not a fan, there is the all-titanium option as well.

The dial is done in a black nickel coating with a nicely grained central disc and a black gold-coated satin-brushed minutes ring. The distinctly styled Arabic numerals are pure Hermès, and the date window at 4:30 matches the dial and is pretty unobtrusively sized. Very legible with lumed hands and indices, the H08 lets the relatively subtle touches like font and the orange-tipped seconds hand convey the Hermès design language without drawing too much attention to itself. 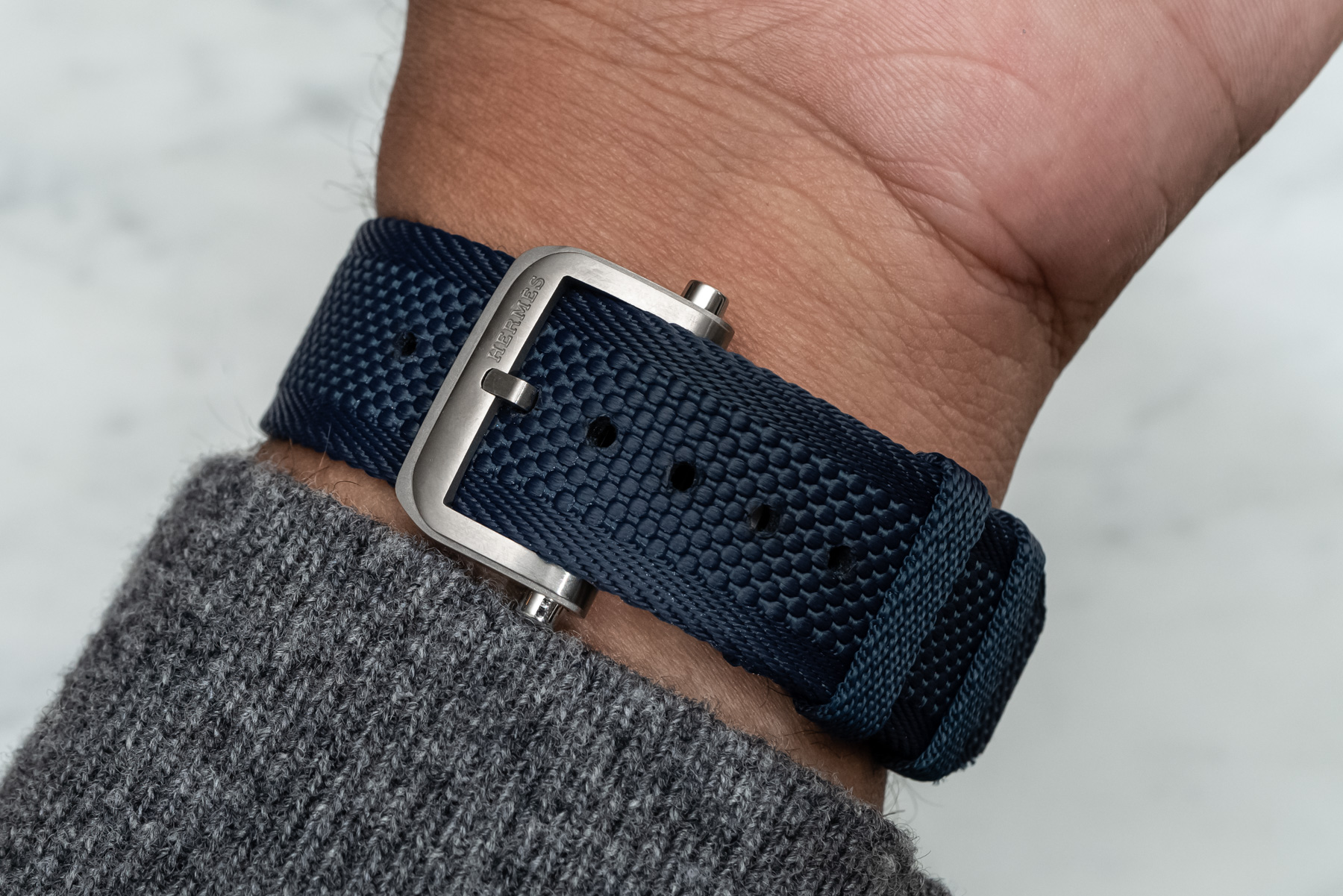 The H08 I wore came on a blue strap with a titanium clasp and was quite comfortable on the wrist, though there is also a fabric and rubber strap option in orange that I would like to try out. 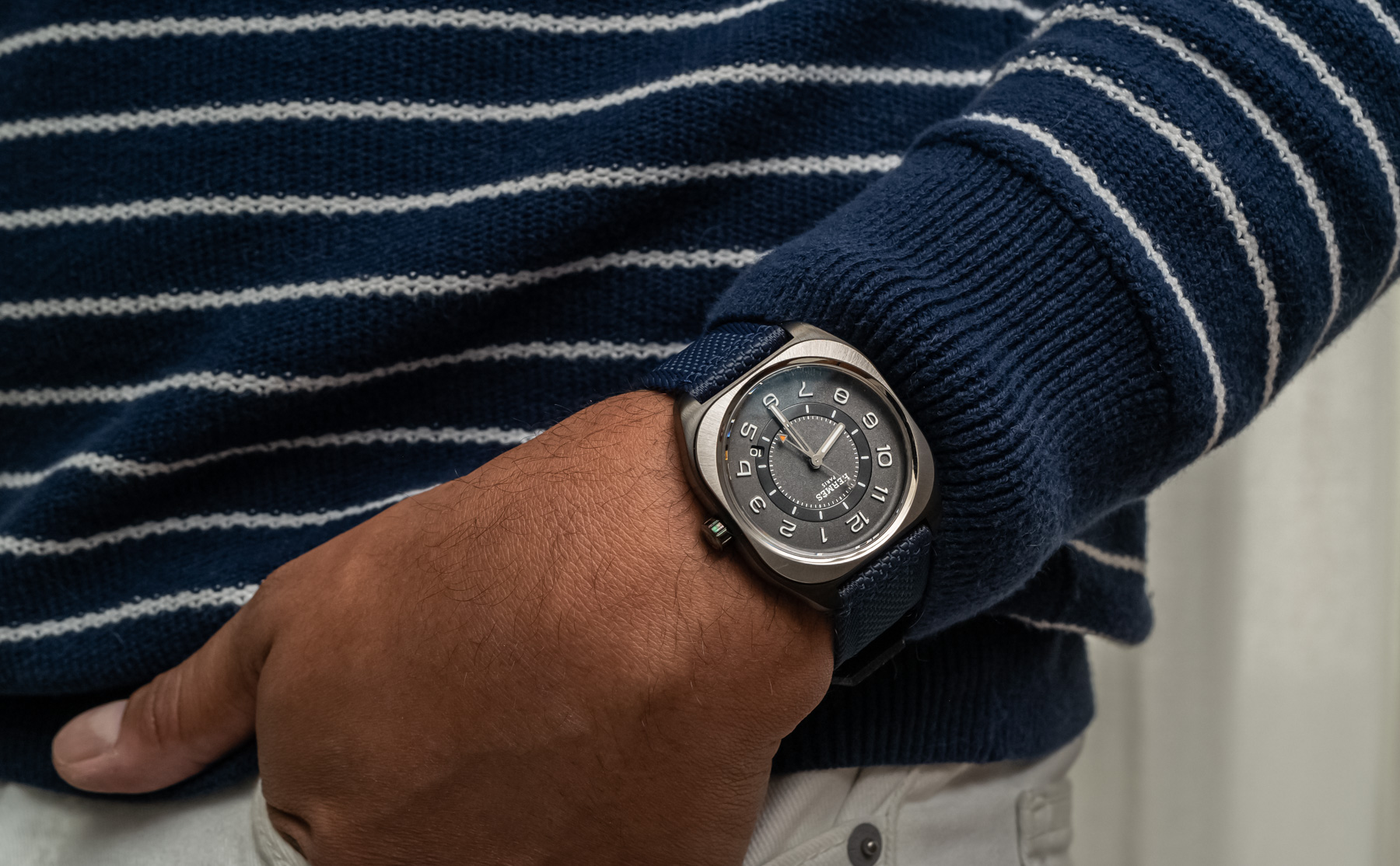 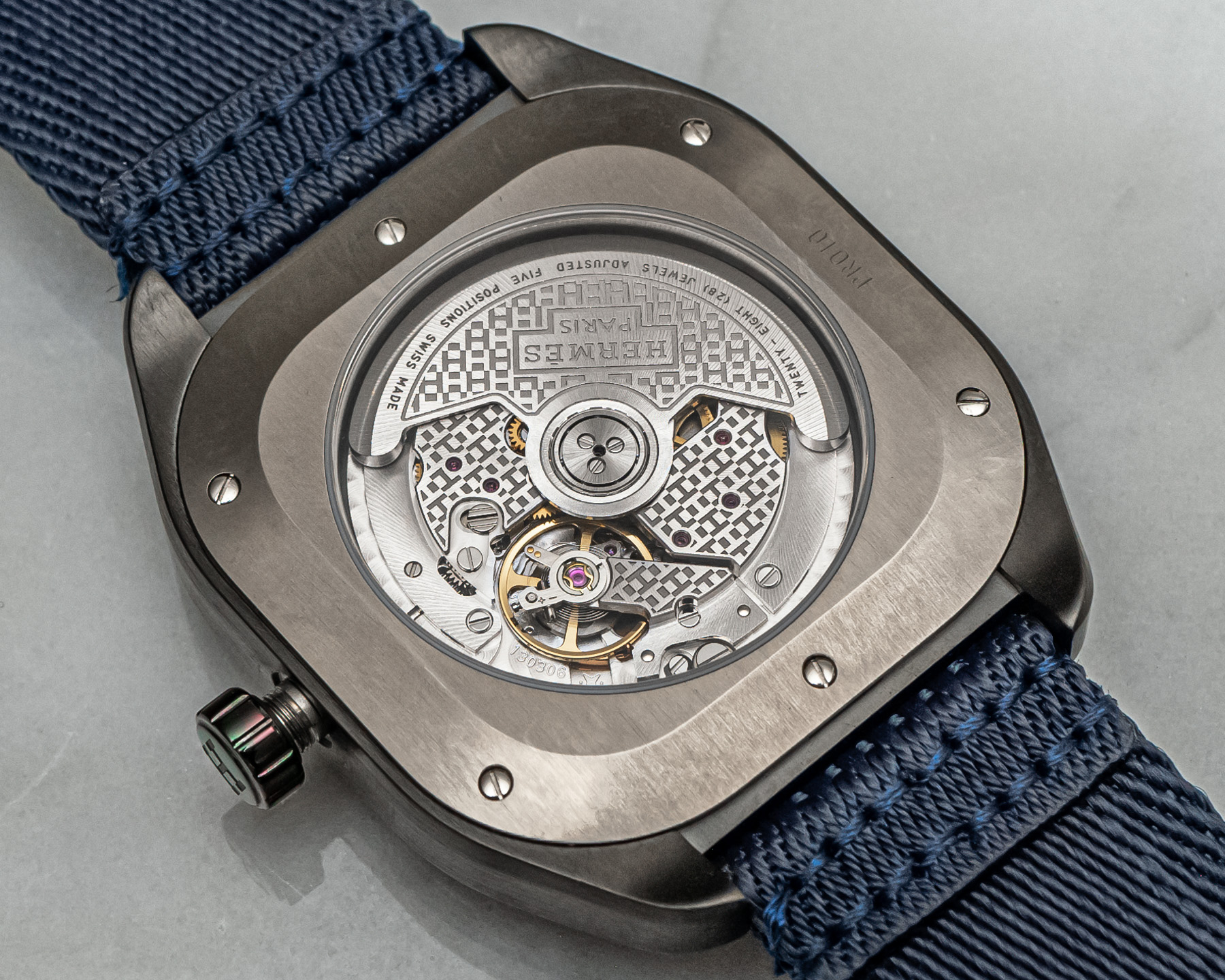 Turning the case over shows the automatic manufacture H1837 movement, which was first introduced back in 2012 in the Dressage collection. The H1837 was the first in-house movement done for Hermès after they acquired a 25% stake in Vaucher back in 2006 (with the Sandoz Family Foundation/Parmigiani owning the majority stake). Not to be mistaken for their micro-rotor movements, the H1837 has a full rotor along with a double barrel. With a balance frequency of 28,800 vph and 50-hour power reserve, the H1837 is decorated with the repeating H-pattern that has become standard for the brand. 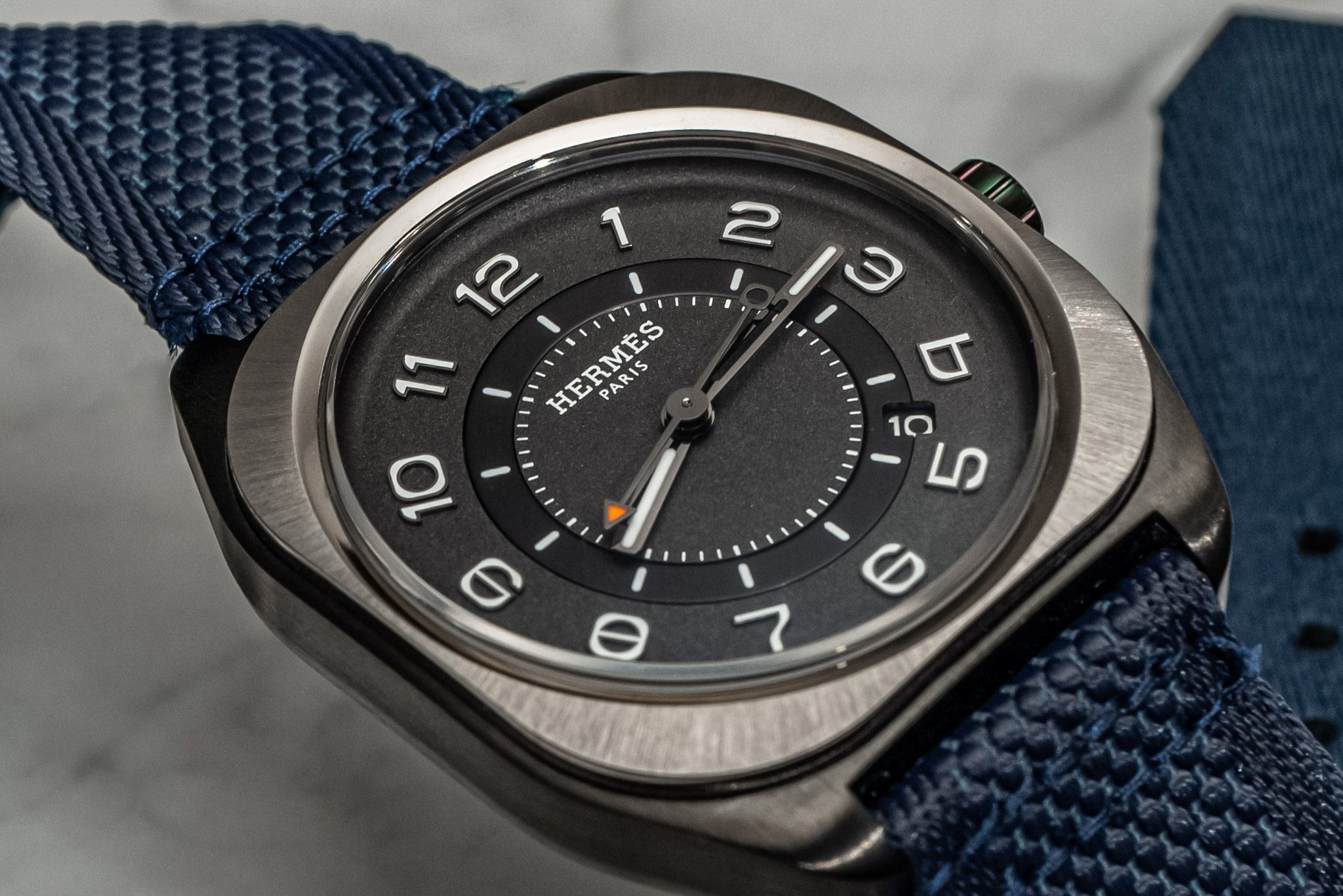 The Hermès H08 is a promising new collection from the brand and I think it’s their most versatile piece yet. I was also pretty pleased when I got the prices because I think they are very fair. The Hermès H08 in titanium on strap is priced at $5,500, the titanium model on titanium bracelet is priced at $6,050, the titanium with black DLC on strap (as seen here) is $5,700, and the graphene model is priced at $8,900. Though it’s the priciest, I am most intrigued by the graphene and am very curious to see what Hermès does with the material moving forward. You can learn more at hermes.com.