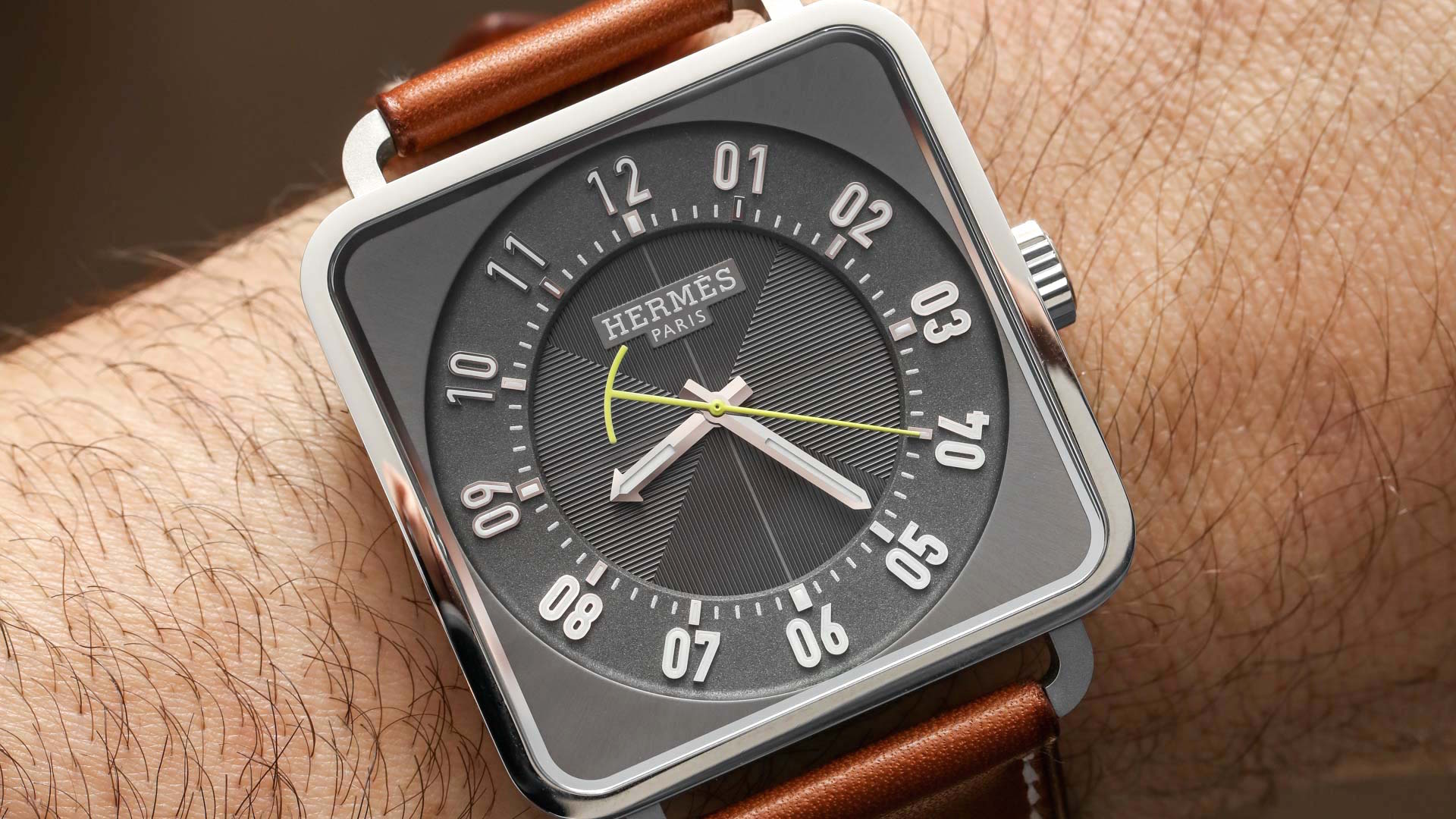 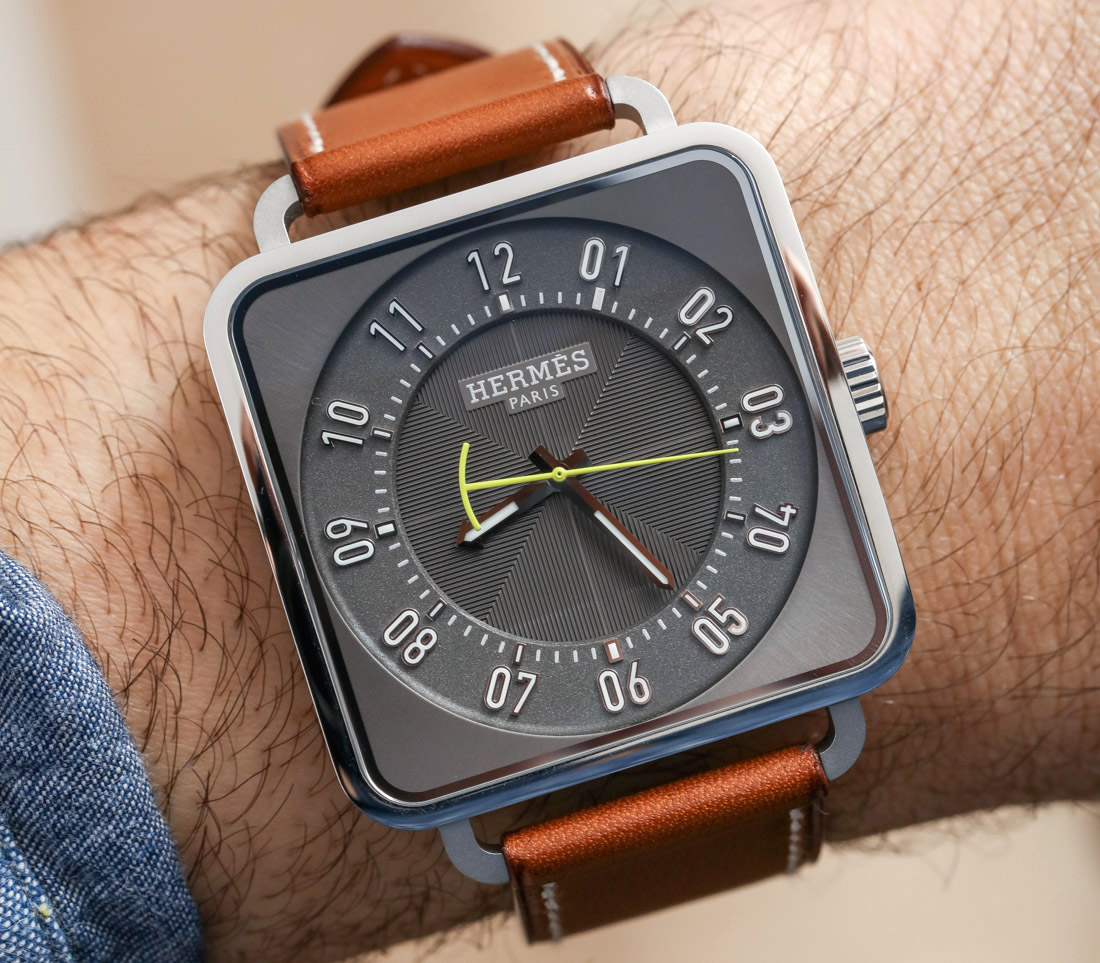 For 2018, Hermès joined the expanding roster of SIHH brands for the first time and reintroduced their Carré H watch with a new dial design, size, and updated movement for the occasion. With a square but rounded case, the Hermès Carré H for 2018 aims for a distinctive presence that will appeal to fans of Hermès fashion, but also some horological cred for picky watch snobs. This has been Hermès’ general approach to watches for years now. You will have to be the final judge of their success, but here are our hands-on impressions of the Hermès Carré H. 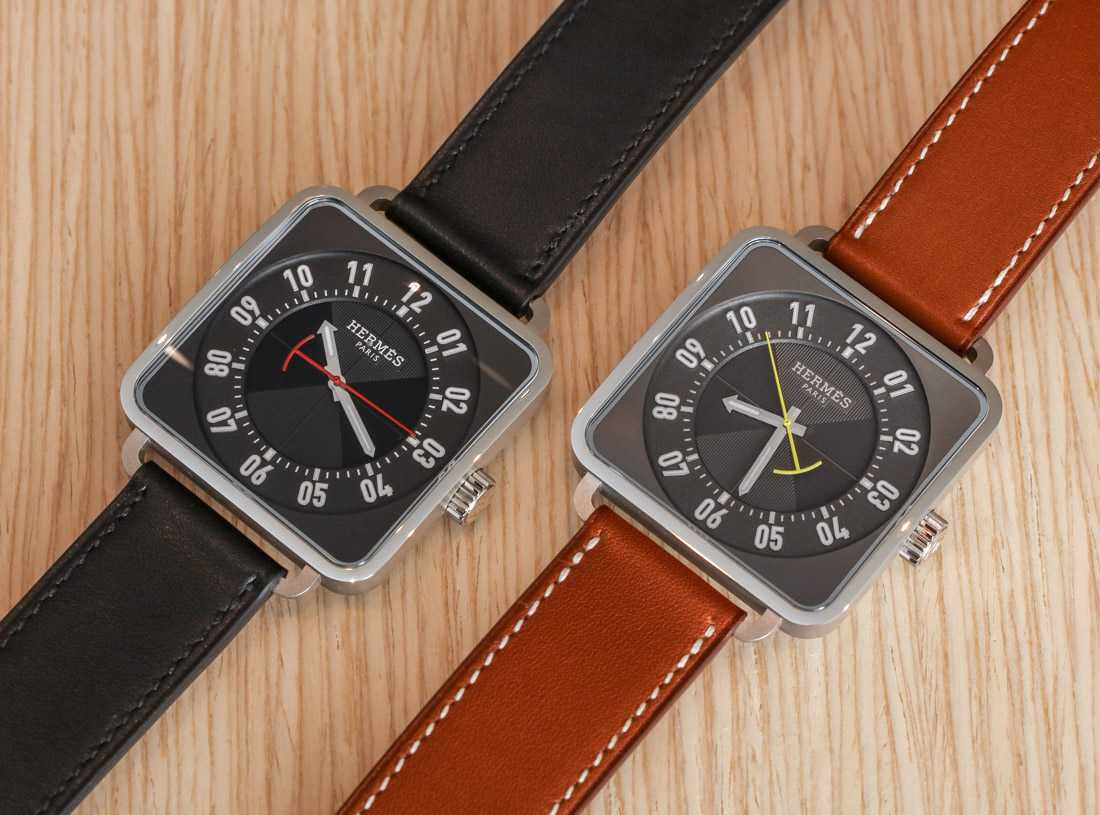 One might not realize sometimes just how ambitious a non-round-cased watch can be and how difficult it is to get right. You see the very few “iconic” successes a lot, but naturally, you don’t see much of the many, many others. Carré means “square” in French, and it is also the name of other product lines from Hermès such as women’s scarves. The Hermès Carré H watch for 2018 is 38mm wide in steel and square-shaped with kind of wire-style lugs and a round dial design. The original Hermès Carré H from 2010 designed by designer/architect Marc Berthier was 36.5mm wide in titanium with a squarer dial, and it cost almost double this version. See the 2010 version and more background along with our initial coverage of the 2018 Hermès Carré H watch here. 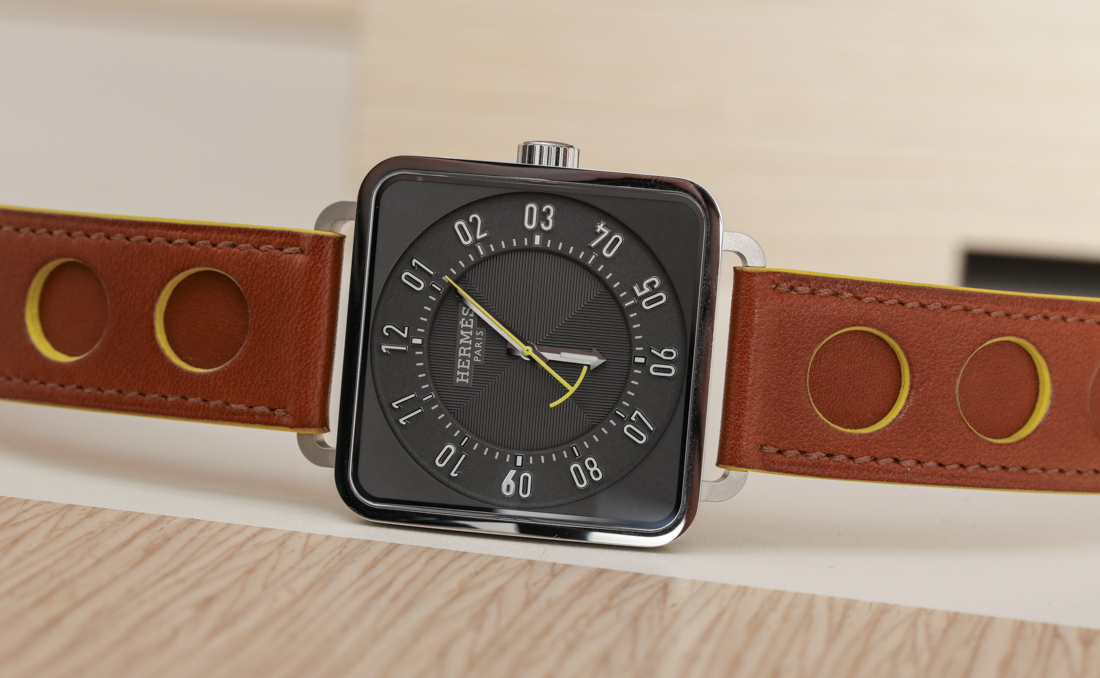 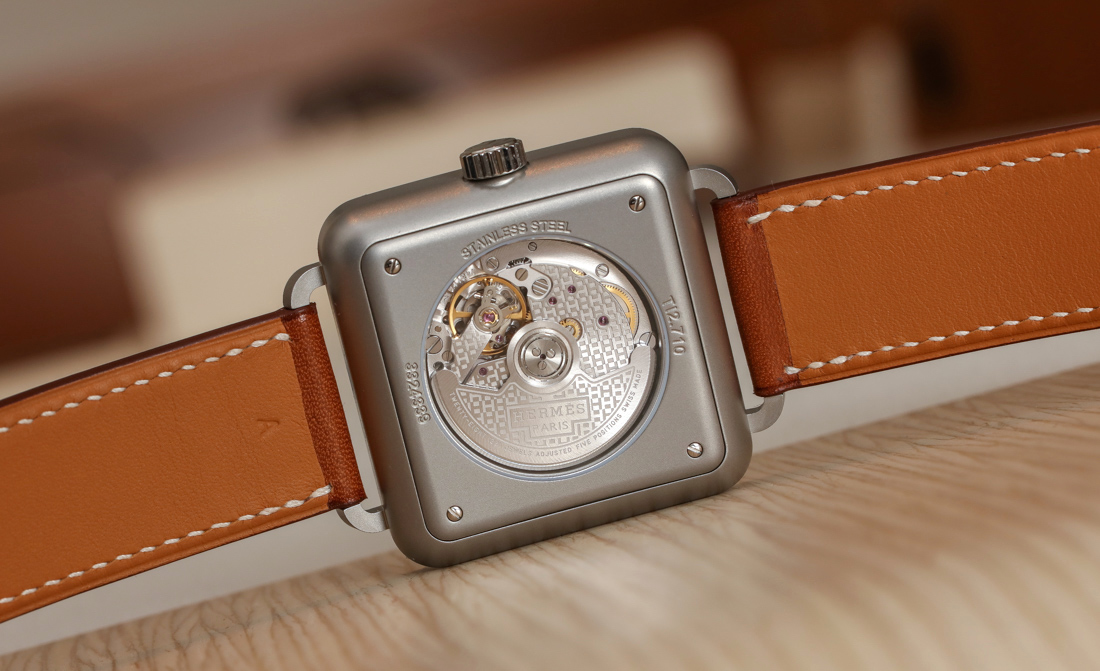 The new 2018 Hermès Carré H is also designed by Berthier, I believe, and it is not the brand’s only attempt at a square/rectangular/non-round watch design that will stick – our hands-on with the Hermès Cape Cod watches here, for example. Personally, first impressions of the 2018 Hermès Carré H watch immediately conjured a number of other watches for me. From dead-on, it was inevitably the well-known shape of Bell & Ross’ square cases, and I couldn’t quite put my finger on what the dial reminded me of – and then I remembered these also design-driven Gorilla watches with the combination of squarish case, round dial, and large double-digit numerals all around. 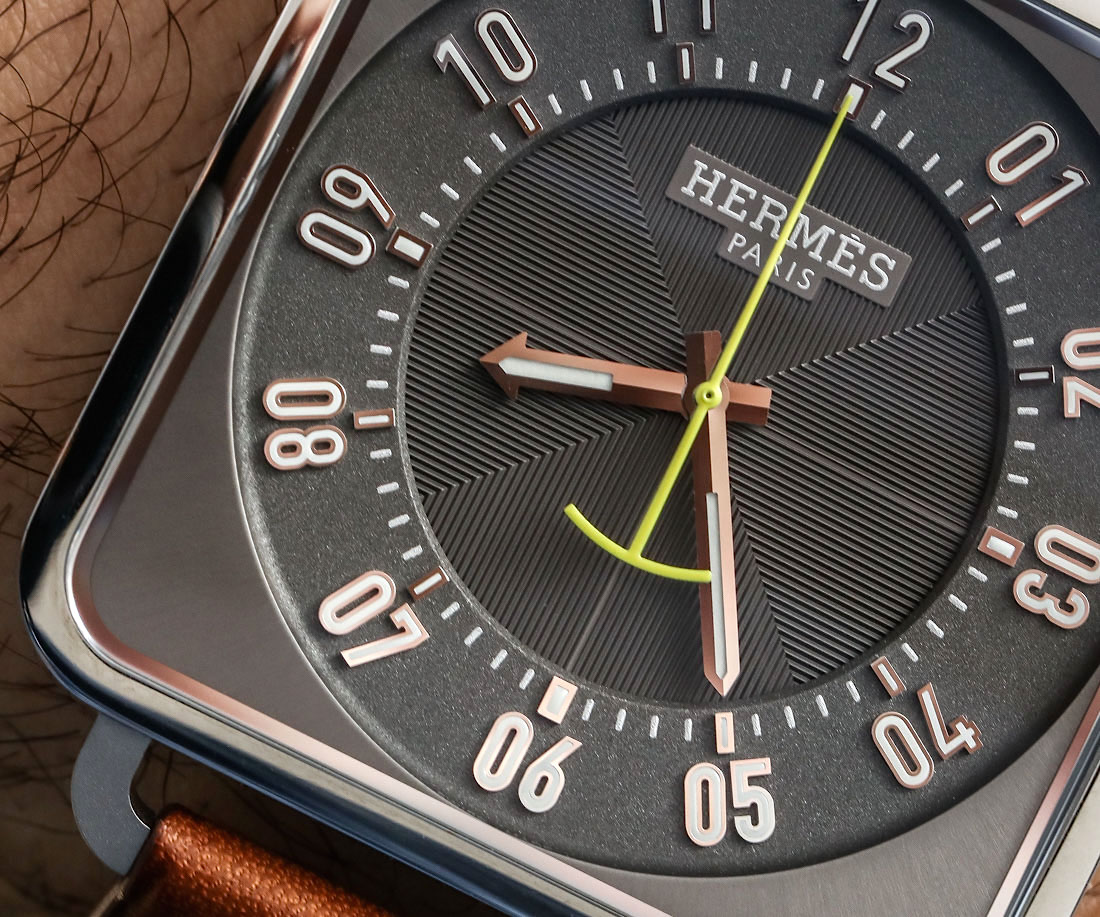 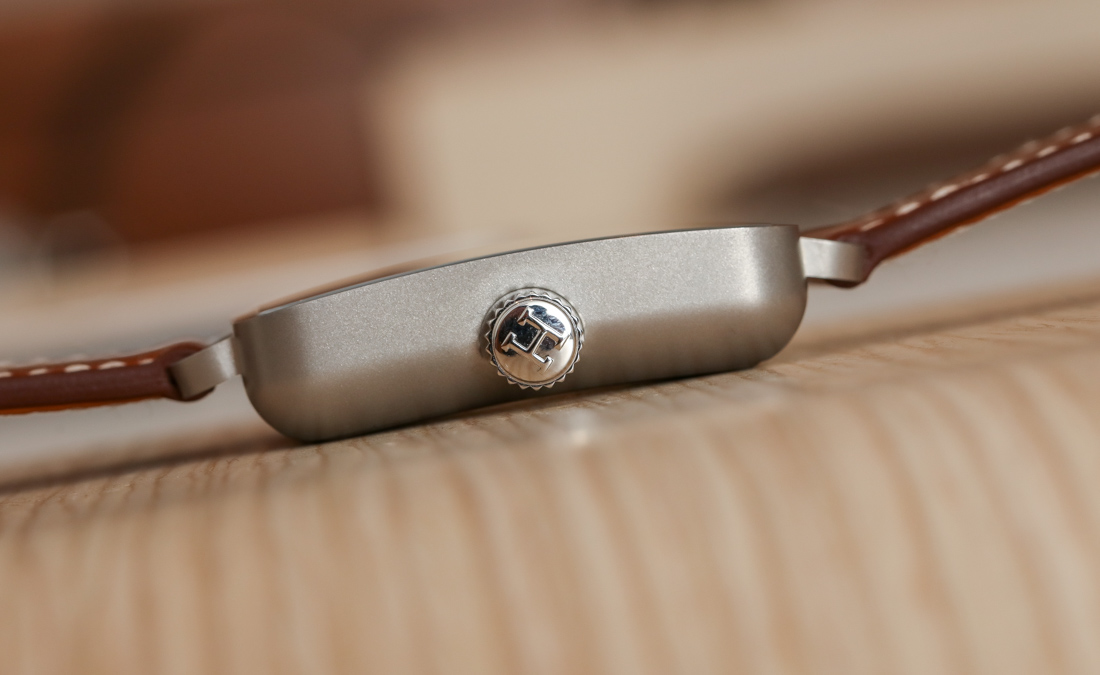 The rounded caseback plus the lug shape said (oh no!) “Apple Watch” – and, of course, there is the further connection that Hermès makes straps and exclusive faces for the Apple Watch. Note, however, when making that comparison, that these traits were present in the Hermès Carré H in 2010, well before the Apple Watch existed. The Hermès Carré H straps measure 21mm where they meet the lugs, but Hermès’ straps that have the more common measurements of 22mm (for the 42mm Apple Watch) or 20mm (for the 38mm Apple Watch) might even fit since the lugs’ bended corners seem give some leeway. What is distinctive and elegant about the case profile, however, is that it curves subtly, and the lugs are angled downwards to follow the arc. Above, these were called “wire” lugs, but they are in fact angular and appear well integrated and executed – they have also been compared to towel racks. 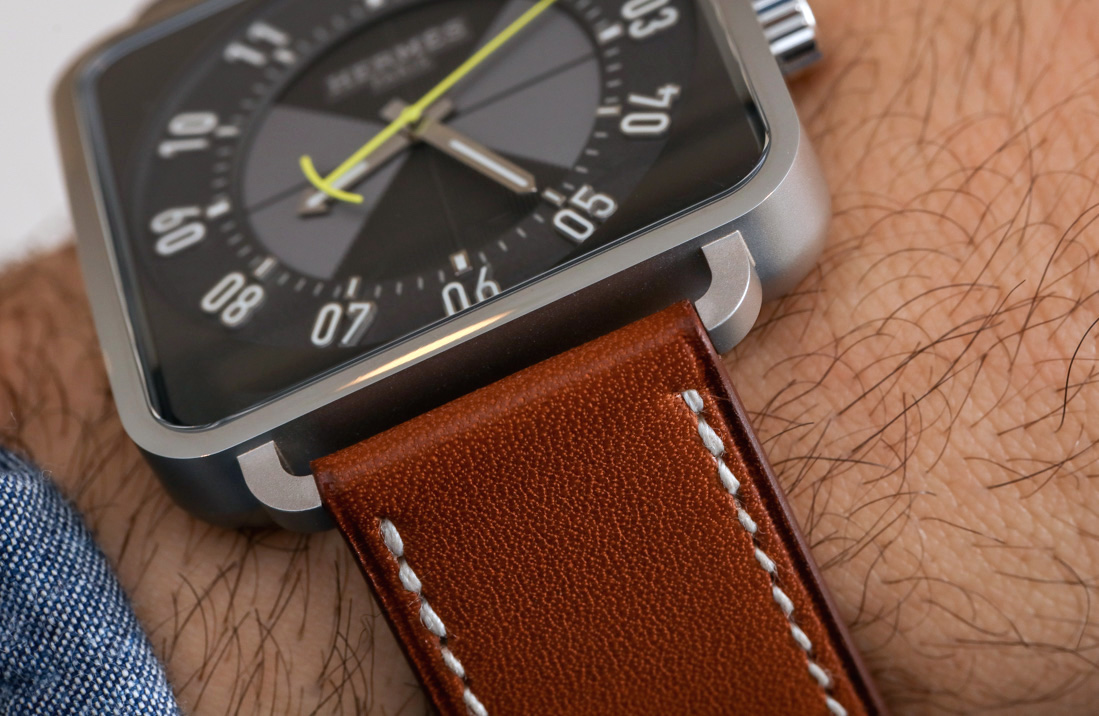 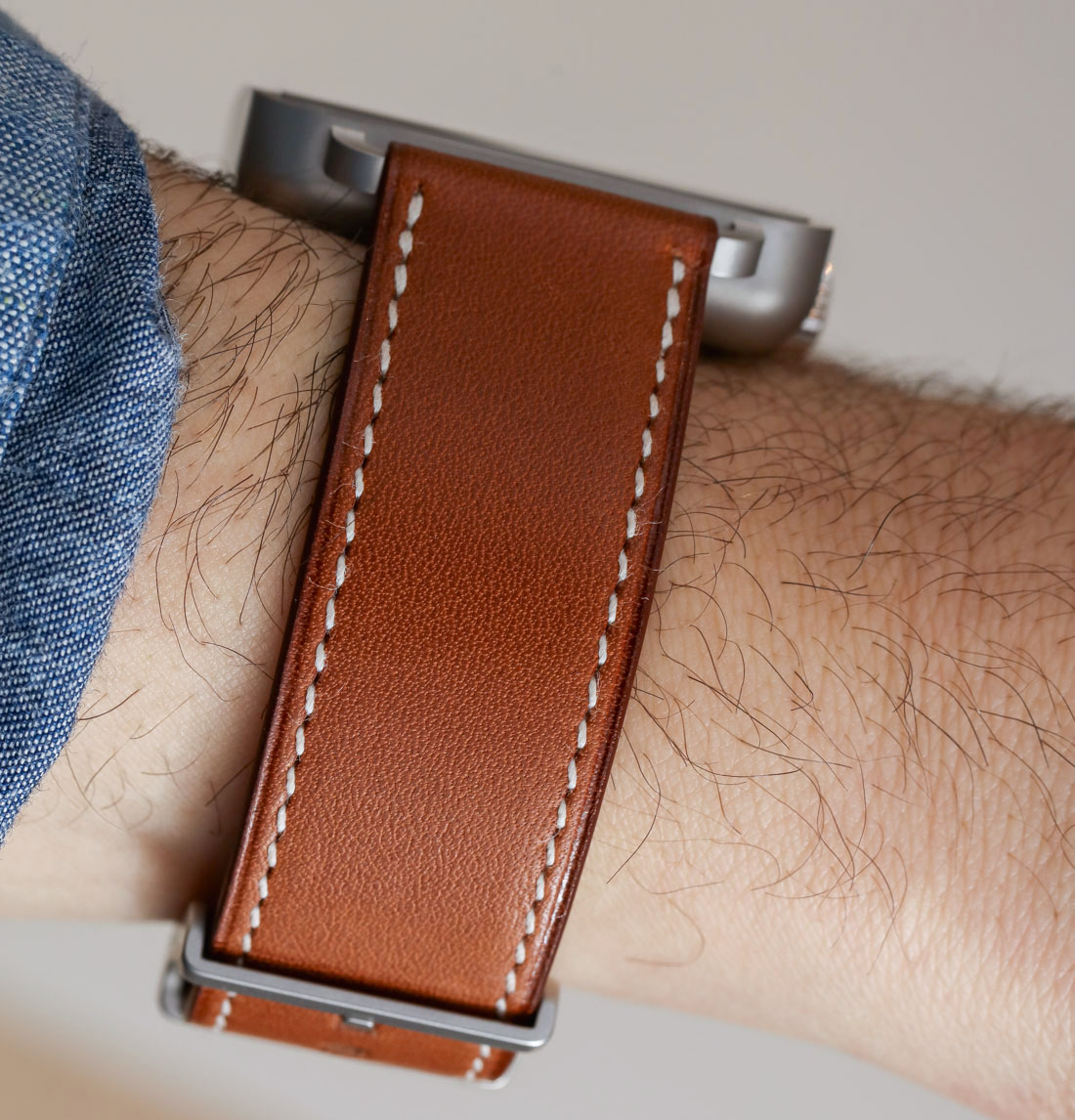 Thanks to the aforementioned curves and rounded edges, the Hermès Carré H wears very comfortably even though it is not among the brand’s thinner watches. At 38mm wide, we will again remind you that square watches wear larger than the same measurements would suggest for a round watch, so the Hermès Carré H has a definite presence on the wrist. Leather is the brand’s forte, of course, so the straps are also going to be some of the best in the business, and there will be a range of choices too. These straps come with a buckle designed to match the case’s angles and bead-blasted finish, and they reflect Hermès’ expertise in belts. 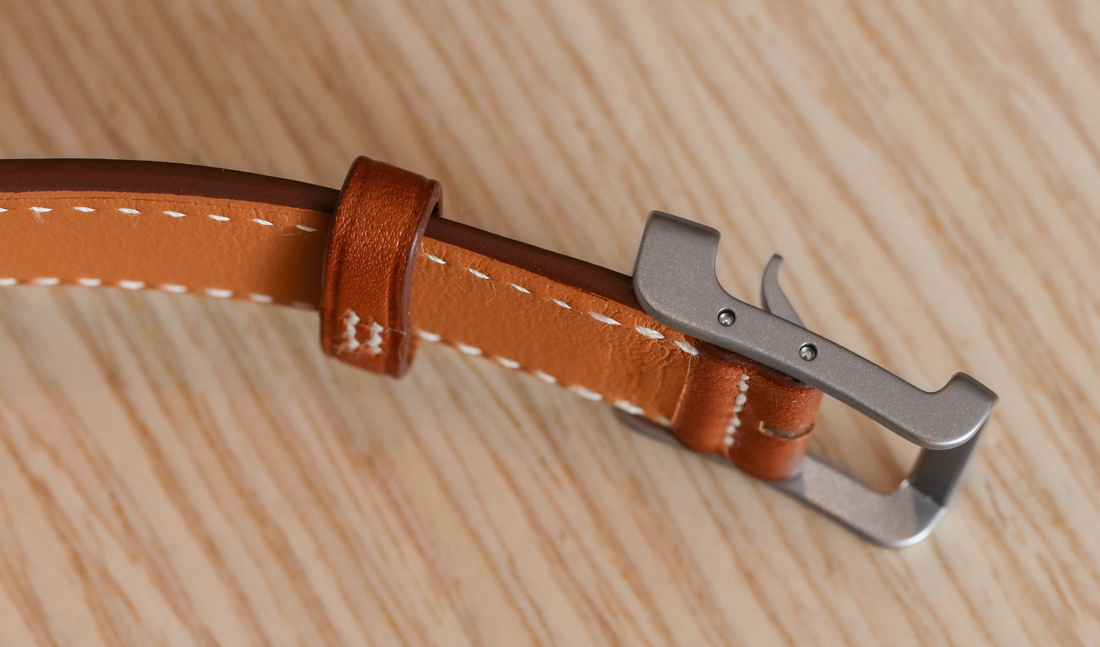 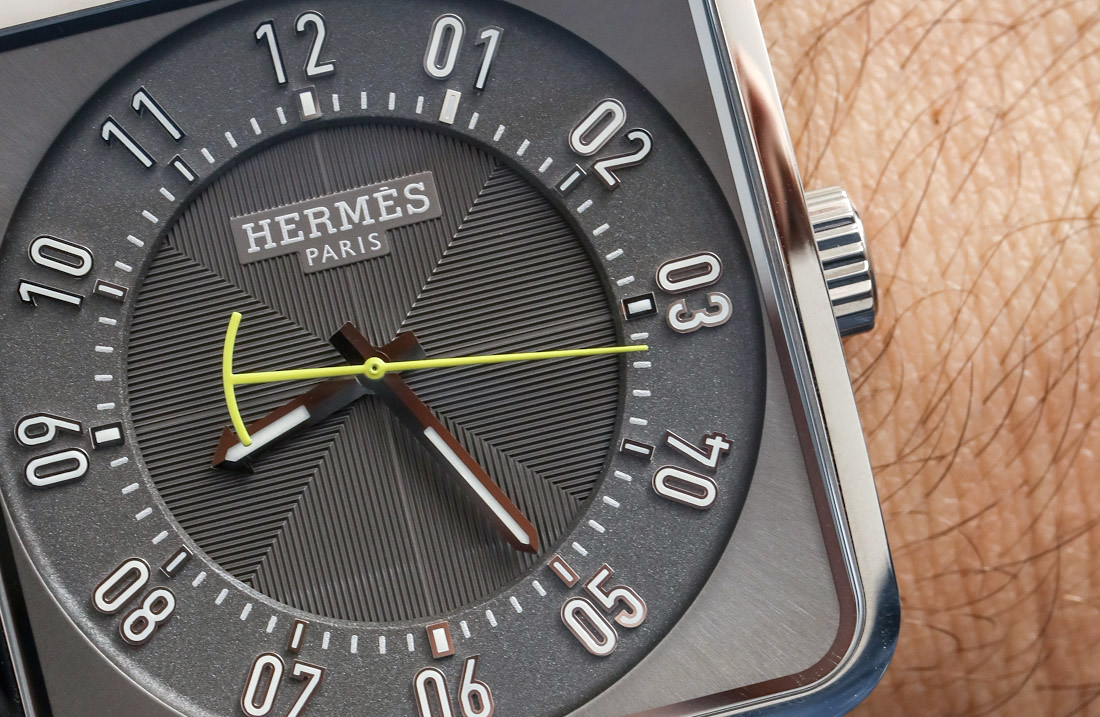 The next thing that catches the eye are the hands – which I rather like, especially the hour hand’s arrow. The red (on the black dial version) or yellow (on the gray dial) seconds hand with its prominent counterweight also stands out, and works to tie the other elements of the dial together, in my mind. The dial texture is pleasing and functional, as the lumed hour and minute hands are pretty legible against it. Also lumed are the prominent, applied numerals that are in a font designed especially for this watch – they are all in double digits for dial balance and a slightly sporty vibe. 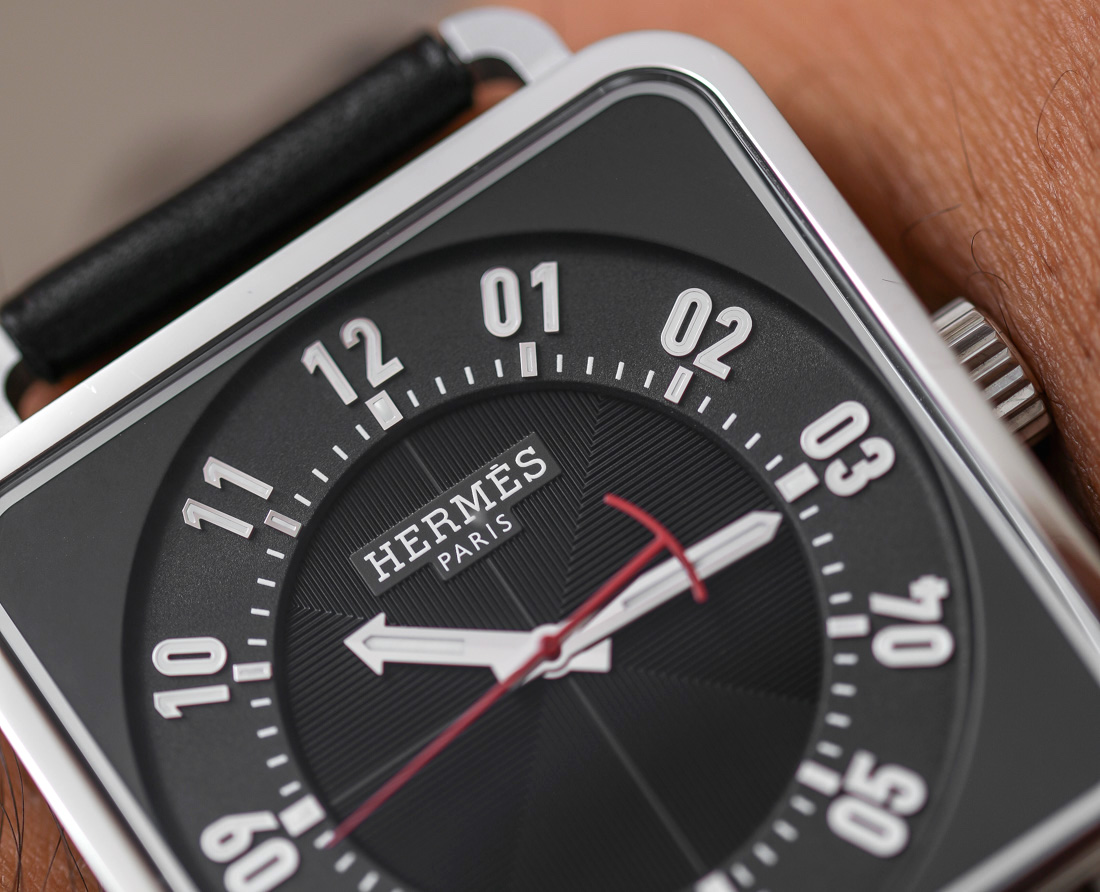 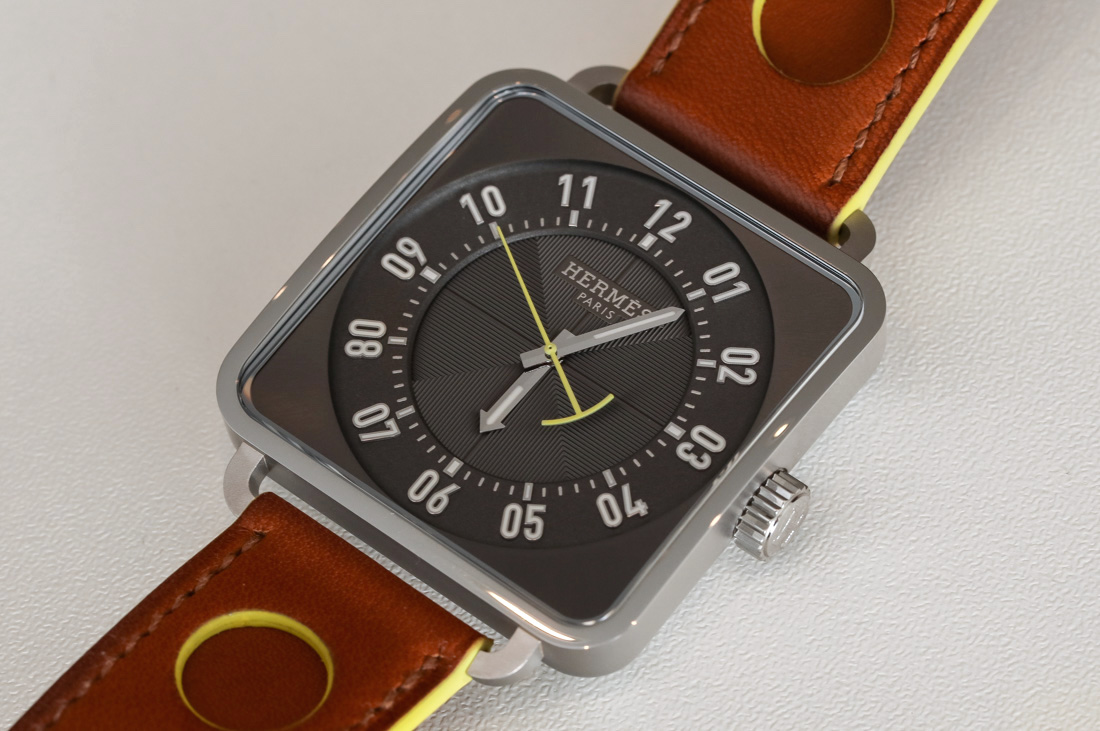 Brands such as Hermès that come from a fashion and couture background should be expected to approach watches from a fresh perspective that’s a bit different from the traditional watch industry. If they didn’t add that personality and identity, how would their watches stand out or compete? Hermès always has a touch of the fun and whimsical in their design, but before being distracted by the aesthetic alone, let us remind you that they have their own manufacturers of dials, cases, and movements – the movements, through Vaucher in Fleurier, Switzerland, who Hermès acquired a 25% stake in and who continue to make high-end movements for a variety of third parties. 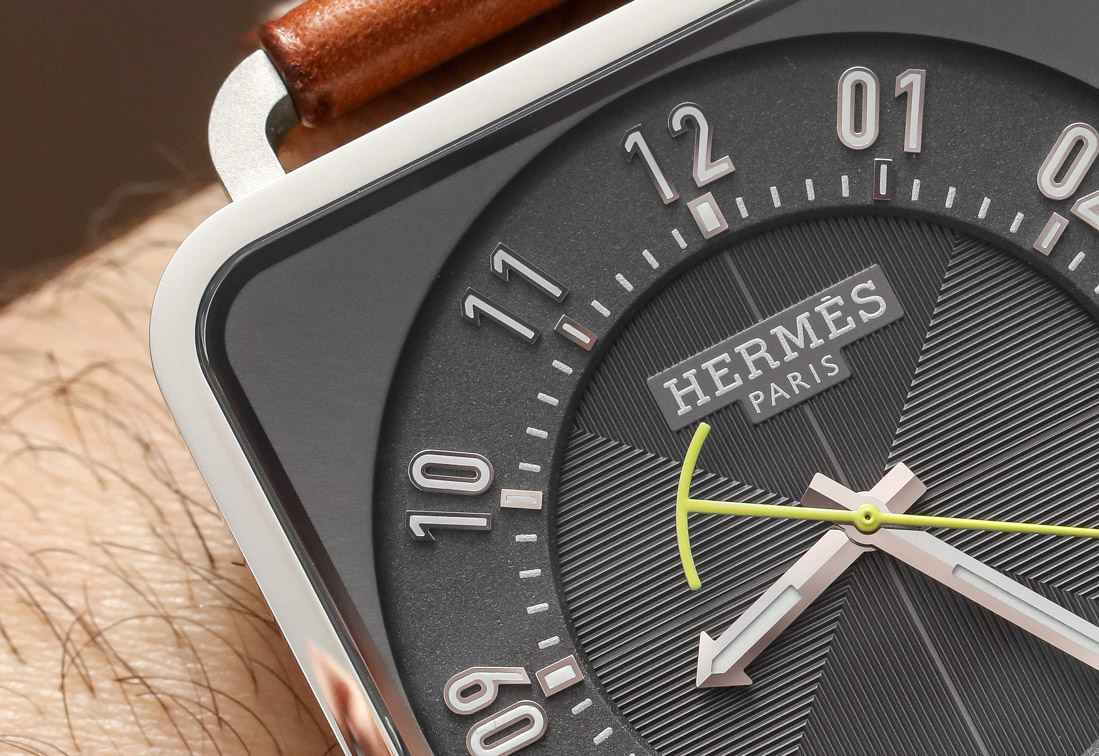 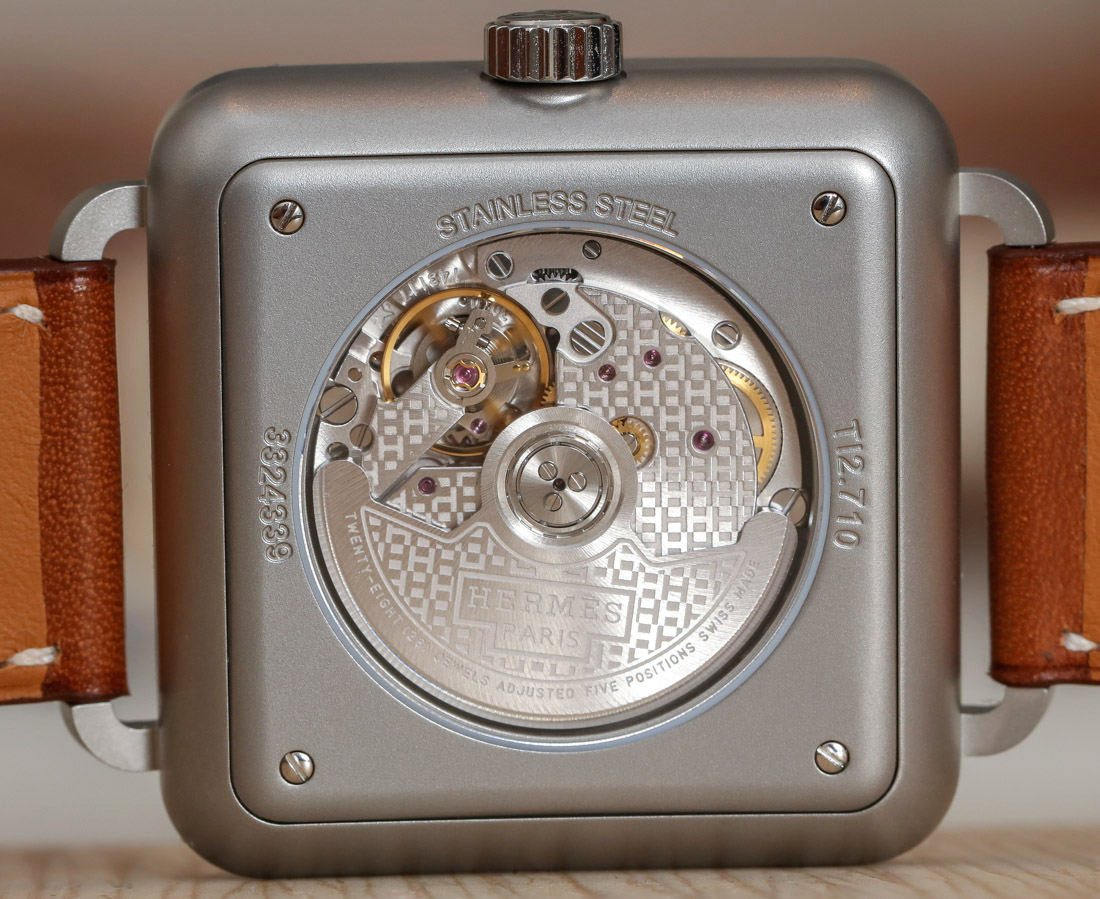 The H1912 movement, on display at the caseback, is made exclusively for Hermès by Vaucher and was introduced in 2012 as the first the brand could claim as an “in-house” movement (alongside the H1837 at the same time). The automatic H1912 has fairly standard specs, operating at 4Hz with a power reserve of 50 hours, and offering three-hand time telling – but it is more interesting than a common stock movement, for sure, and it is decorated with Hermès’ characteristic “H” pattern on its bridges and rotor. The movement does offer a date also, as in the Cape Cod watches (linked to above), but as per the apparent taste of many collectors, it has been omitted here. The 2010 Hermès Carré H used a Girard Perregaux/Sowind GP3200 movement. 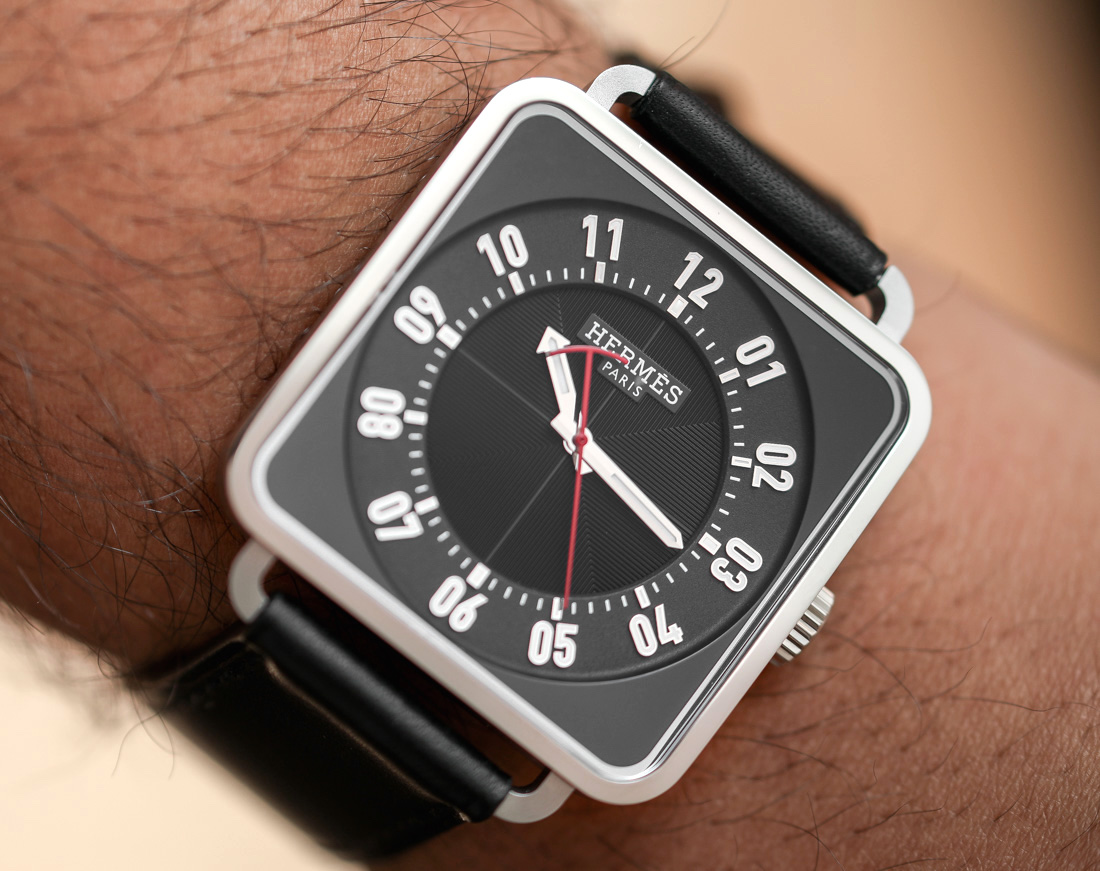 For a three-hand automatic watch, even with an “in-house” movement, the Hermès Carré H is in a very competitive place. The Hermès Carré H will probably need to appeal to both fans of Hermès as well as those who appreciate mechanical watches and can afford to watch shop in this price range. Fans of designer Marc Berthier may be another audience. Personally, I’ve long had a fascination with square and rectangular watches – and loved reviewing this Bell & Ross BR 03-92 Diver, for example – but I think I still prefer the dial design and probably the size of the 2010 version – though not the price tag which, again, is about double that of the 2018 Carré H. Price for the 2018 Hermès Carré H watch is $7,725 USD. hermes.com