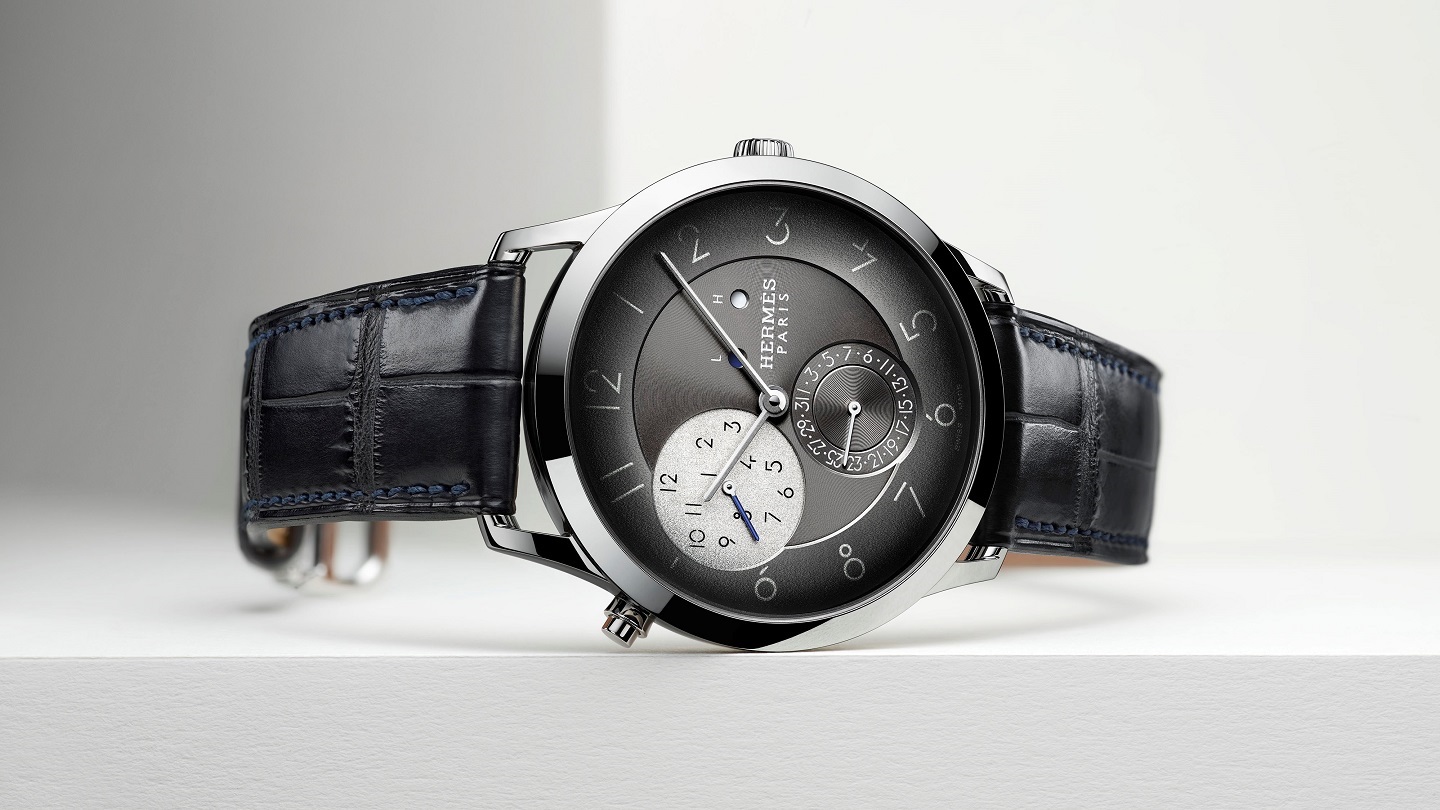 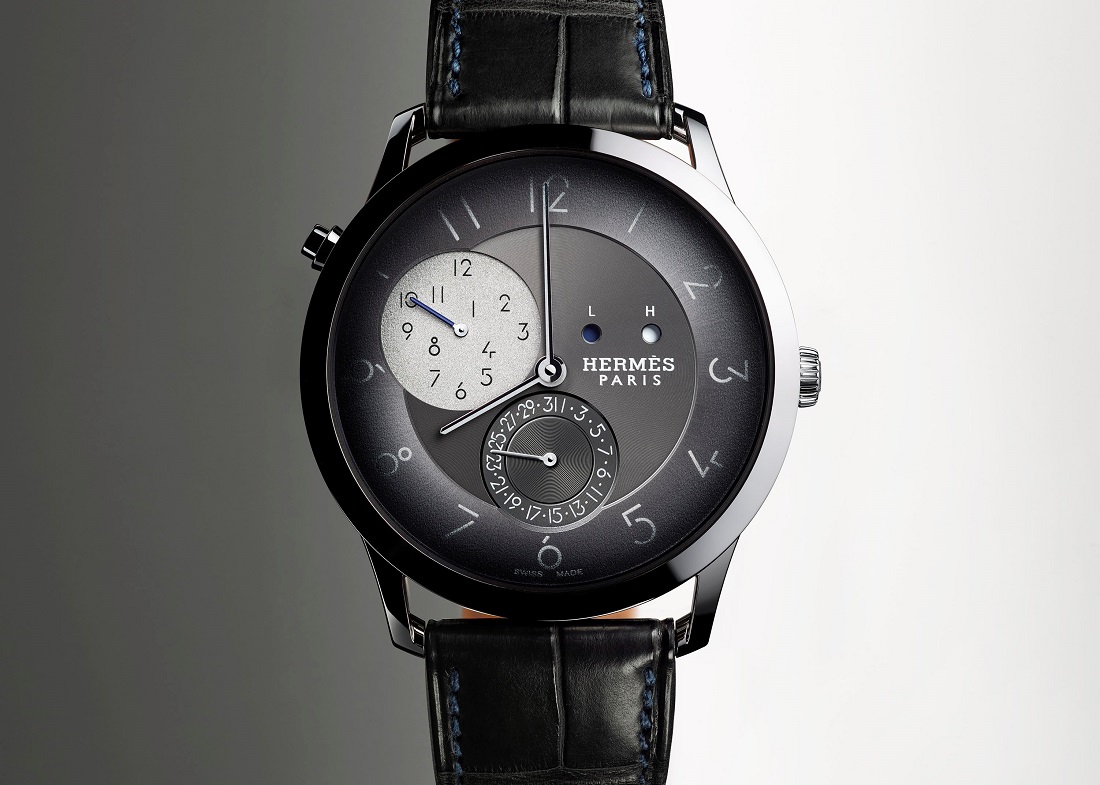 Hermès started producing its own watches as early as the ’70s, but they got really serious in 2006 when they bought a 25% stake in Vaucher Manufacture Fleurier. And in 2015, Hermès made their biggest splash yet with the seductive Slim d’Hermès watch. Since then, Hermès has been steadily building up its Slim d’Hermès collection, and the latest watch will surely delight frequent travelers. This is the new Hermès Slim d’Hermès GMT. 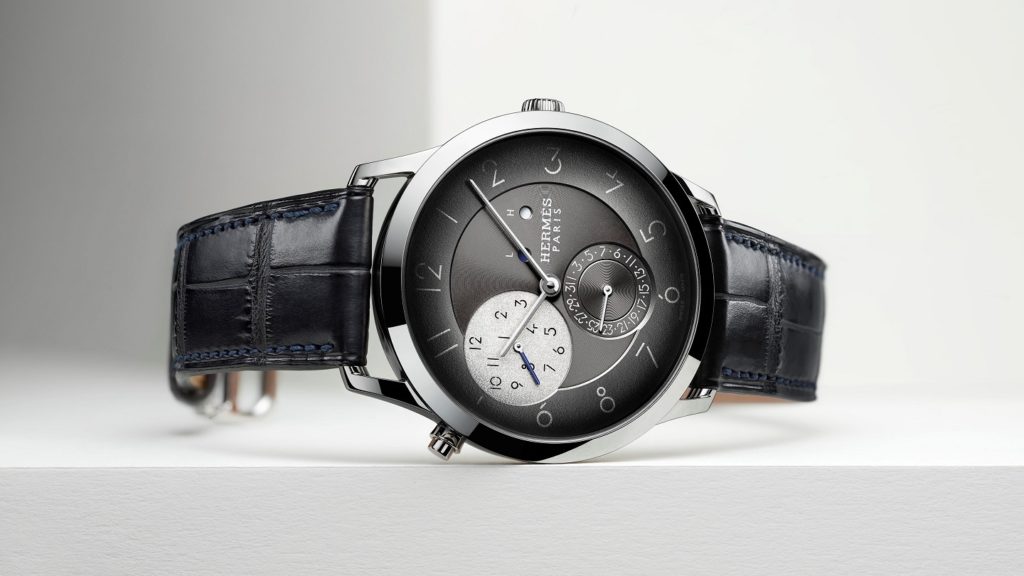 The new Slim d’Hermès GMT features the distinctive Slim d’Hermès case with its short angled lugs. Case diameter is a modest 39.5mm and measures just 9.48mm thick. The case is made out of palladium, a rare metal that resembles platinum but is lighter and rarer. The crown is at 3 o’clock and there’s a pusher at 10 o’clock for adjusting the GMT hand. The case is water-resistant to 30m and the watch comes with a handmade matte graphite alligator strap with blue stitching on the sides.

The dial has a unique slate color with a sunburst chapter ring. At 10 o’clock, you have the GMT counter in silver; and at 6 o’clock you have a date counter with a guilloche center. You also have day/night indicators for local and home time at 2 o’clock. The dial uses the quirky font that was designed especially for the Slim d’Hermès collection by noted French graphic designer Philippe Apeloig. 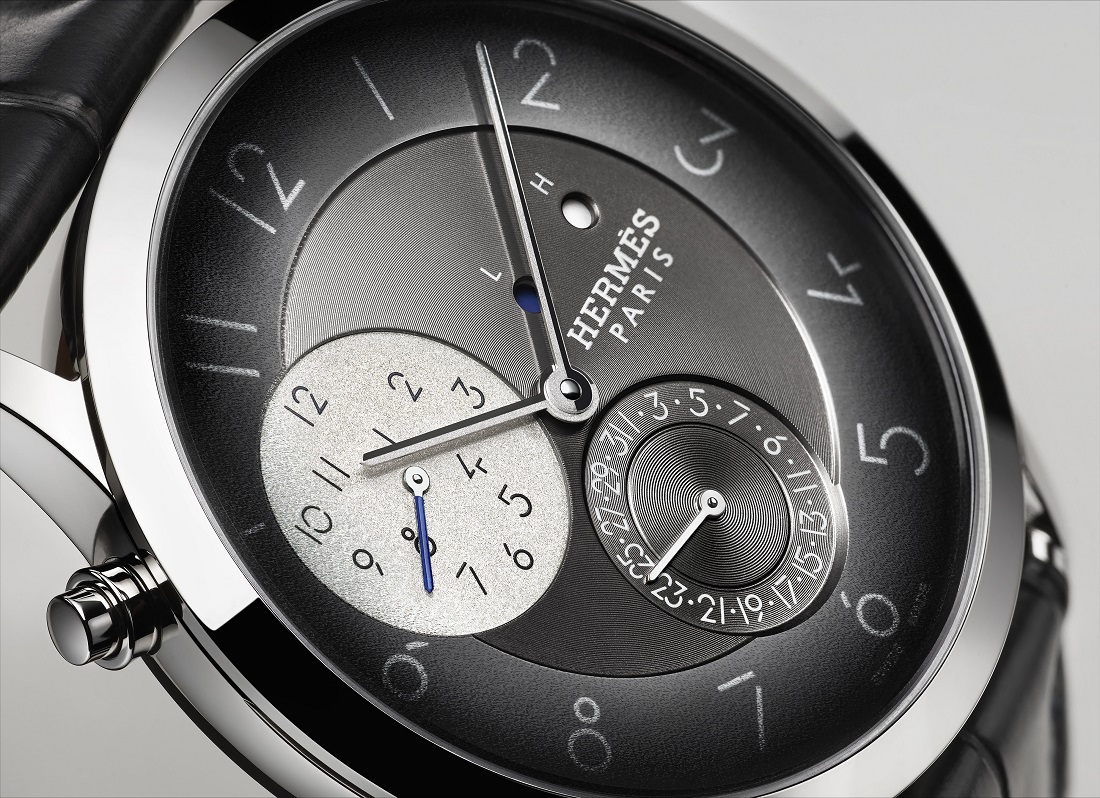 The day/night indicators are intuitive and are represented by two small apertures labeled ‘L’ for local time and ‘H’ for home time. White is day and blue is night. Easy peasy. The silver GMT counter is unusual because the numbers seem to be scattered, but upon closer inspection, you will find that they are actually in the right order. Legibility shouldn’t be an issue since the GMT hand is in bright blue and extends all the way to the edge of the counter. As I mentioned earlier, the GMT counter can be easily adjusted by pressing the pusher at 10 o’clock.

The movement within is the Hermès H1950, which is just 2.6mm thick. The movement relies on a micro-rotor to achieve its thinness. It beats at 3Hz and has a decent power reserve of 42 hours. The GMT complication is possible because of an ultra-thin GMT module designed exclusively for Hermès by Agenhor. It is remarkably thin at just 1.4mm in height. The movement is visible through a sapphire display caseback and is handsomely decorated with perlage on the base plate, polished screw heads, and hand-chamfered bridges that are decorated by the signature ‘H’ motif of Hermès. 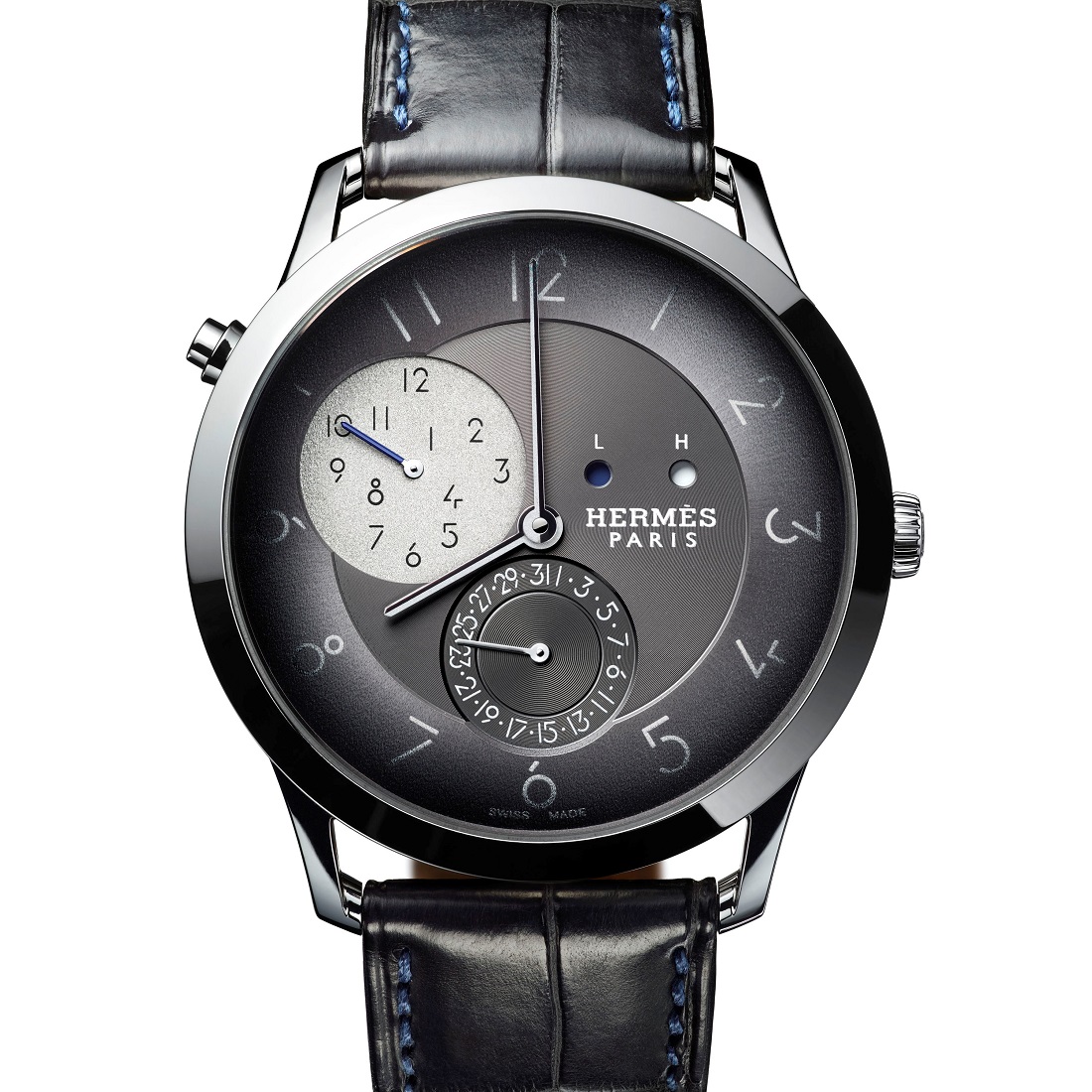 The new Hermès Slim d’Hermès GMT is a welcome addition to the collection. I like how Hermès successfully combines style with function, and the Slim d’Hermès is easily one of the most smart-looking GMT watches one can find. Yet despite all of its flair and pizzazz, it remains to be completely functional. All in all, I consider it to be a very thoughtful piece of watchmaking from Hermès. The Hermès Slim d’Hermès GMT will be limited to just 90 pieces and it is priced at €12,000. hermès.com