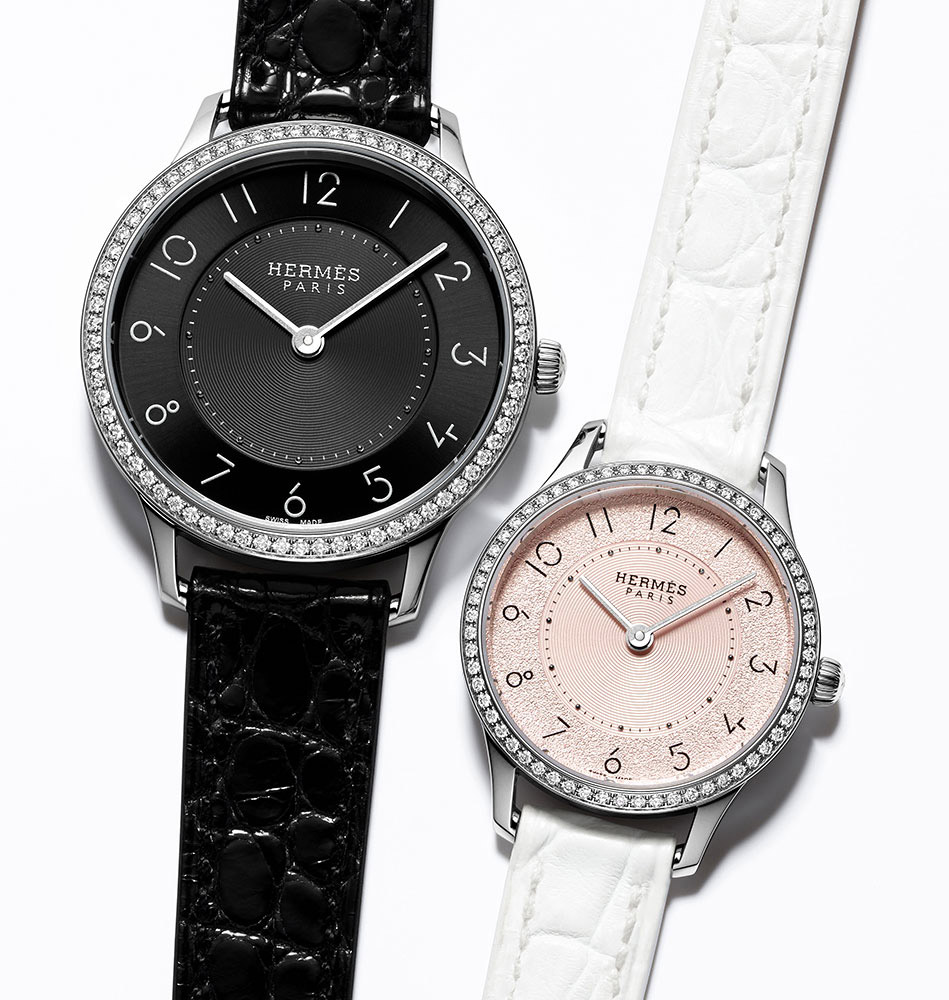 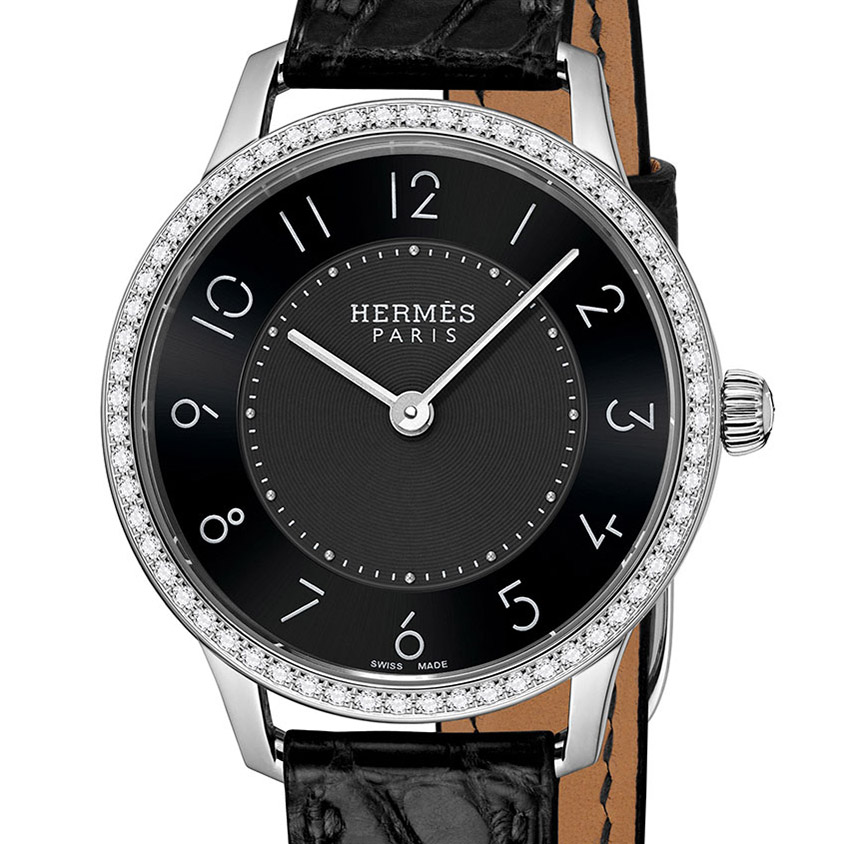 Hermès has created a great modern classic with the Hermés Slim d’Hermés collection which was introduced in 2015 with the ultra-slim in-house Caliber H1950. It’s a classic design that can do anything: men’s, ladies’, diamonds, special-editions, enamel dials, and complications. The Slim works particularly well with the automatic H1950, (a trim 9mm thick in the case) but it lives up to its name best as a quartz watch, which really brings out the “slim” in Slim d’Hermés. The new Slim d’Hermés quartz versions (nicknamed Magnolia because of the color of one of the dial options) in 25mm and 32mm sizes show just how wearable and accessible this collection can get, and the new black and magnolia-white dials really enhance the minimalist aesthetic. It is perfect for everyday wear – which was always the main goal of the Slim d’Hermés collection – and, considering all the diamonds, priced affordably beginning at just over $7,000. 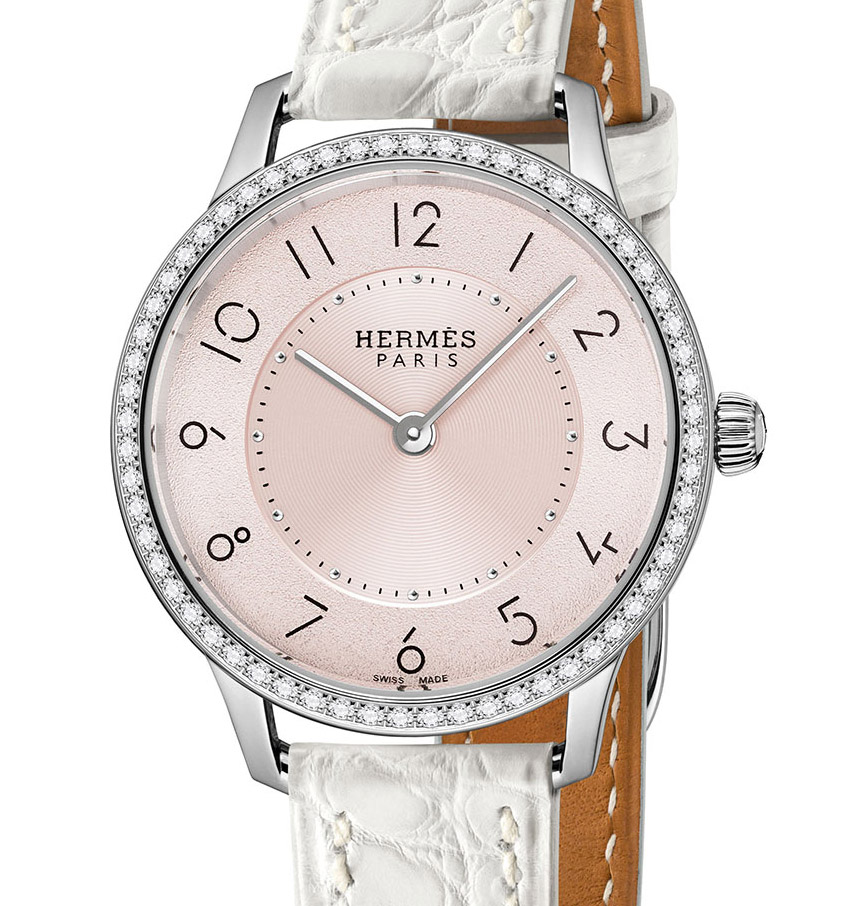 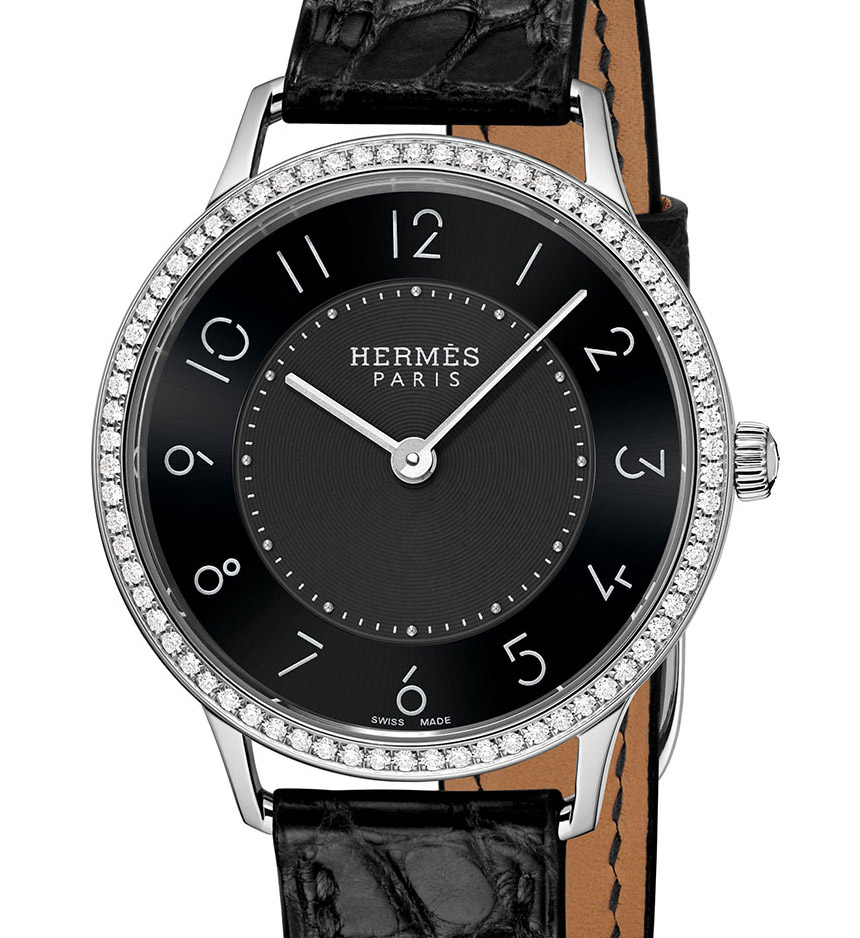 The Hermés Slim d’Hermés is a uniquely modern watch, distinctive mainly for its custom-designed stencil-style font, created just for Hermés. It’s an unimposing font with thin letters and “silent” spaces that leave lots of room for other functions – or just some nice open space – on the dial. Another signature is the tapered, angled lugs that are fairly short to allow the watch to hug the wrist. The straps are crafted in the brand’s Brügg, Switzerland, factory to the standards of all Hermès leather goods. The Magnolia dials are black lacquer or “magnolia” white lacquered, which actually has a rosy color.

Such care in design and finish is often not applied to a quartz collection, but the Slim d’Hermés is so much more than a singular quartz watch. It’s a foundational design that can be built upon to work with any concept. So while the Magnolia is great on its own, it is also great by association with other impressive pieces in the same collection. Take the Slim d’Hermés Perpetual Calendar (hands-on here), which won the 2015 Grand Prix d’Horlogerie de Genève. The Caliber H1950 (with a module by Aghenor) includes dual time and day/night functions as well. Yet with all these functions, including fairly large numerals, the dial remains incredibly sleek and readable, partly because the font is so thin and unimposing with its “silent spaces.” 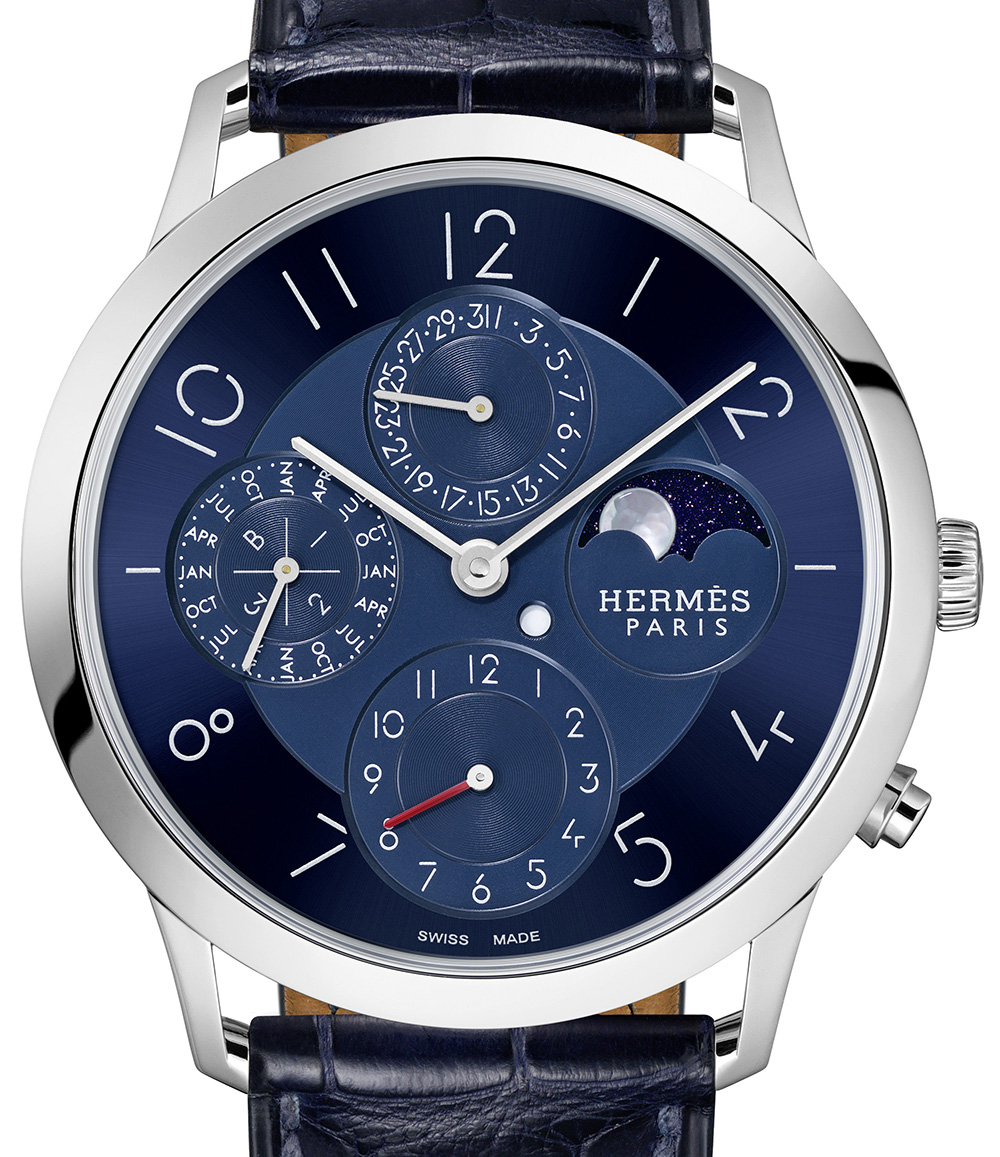 In fact, I like this as a ladies’ watch, with its mother-of-pearl moon phase, aventurine sky, and slim profile (the perpetual calendar module only adds 1.4mm of thickness to the watch). The basic Slim d’Hermès Manufacture, with the ultra-thin automatic Caliber H1950 with micro-rotor is 39.5mm wide and only 9mm thick, and that is also a nice size for women. 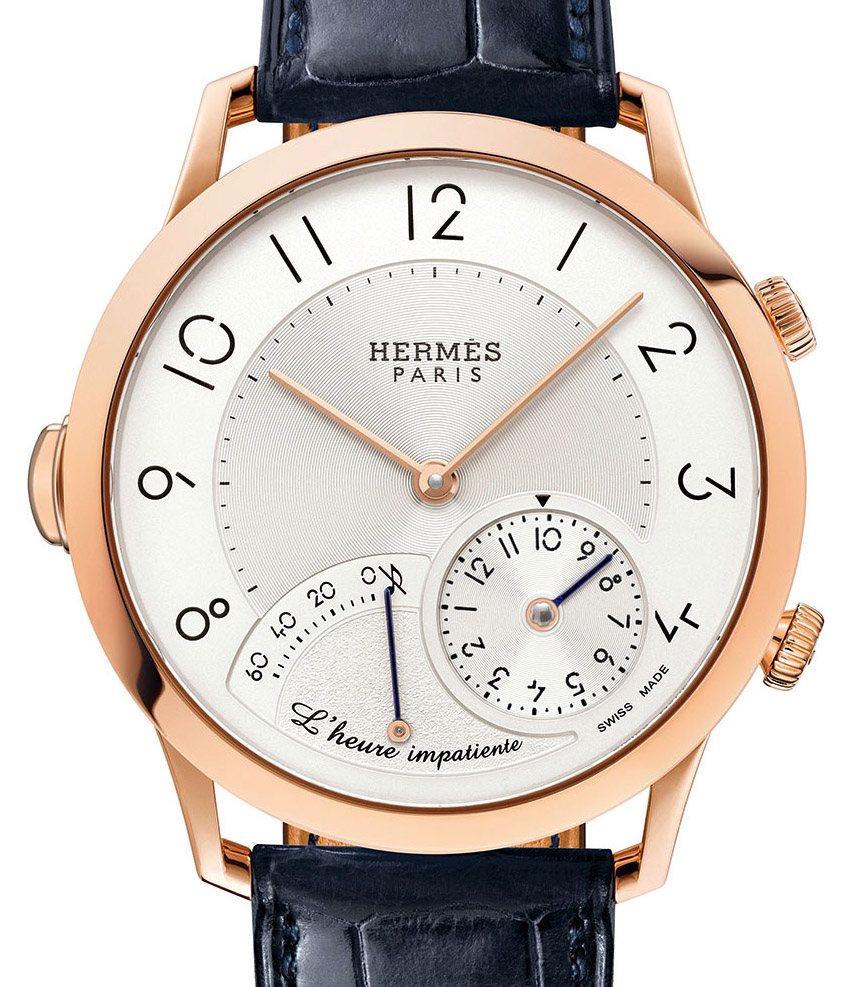 There is also the quirky Hermés Slim d’Hermès L’heure Impatiente, which can be set to count down from an “eagerly awaited event” to take place sometime in the next 12 hours. A countdown begins one hour before the event in question, and that is displayed on the retrograde timer at 7 o’clock. When time is up, the watch chimes a single note. And I’m not sure what gender is intended to wear the Slim d’Hermès Grrrrr! (officially with five r’s and exclamation point), one of Hermès’ special editions that reproduce in miniature the most popular patterns of the firm’s iconic silk scarves, but it certainly adds interest to the collection. 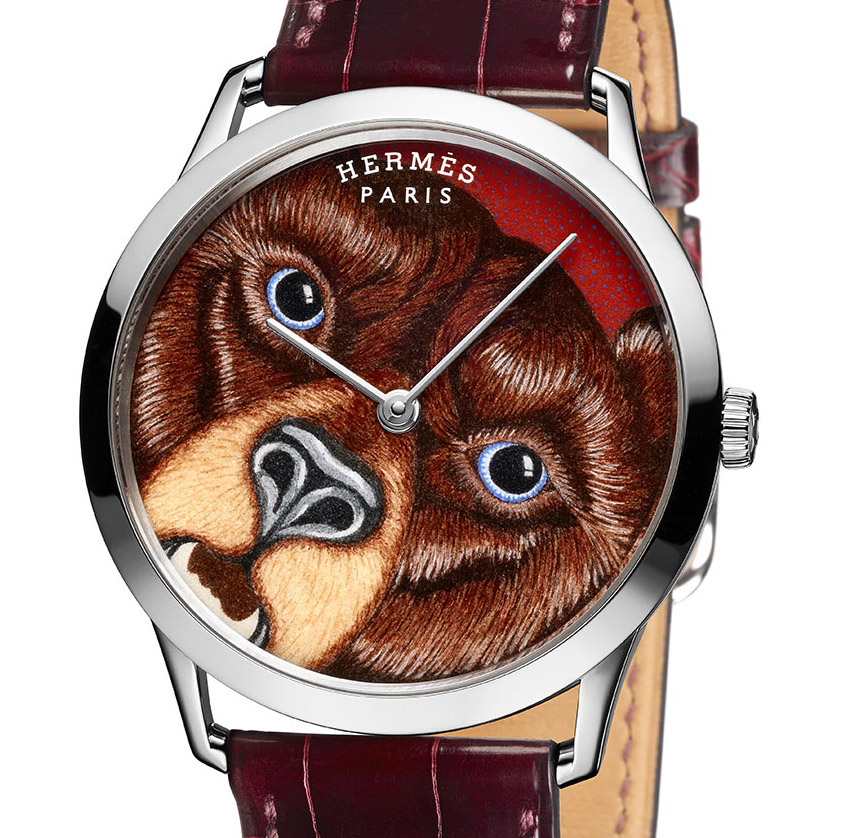 The Hermés Slim d’Hermès Magnolia is available in two sizes: 25mm, priced at $7,225, and the 32mm, priced at $8,700. To keep it interesting from a fashion point of view, there are also colored straps, including blue, purple, and red. If you want to go up to 39mm for the automatic Slim d’Hermès, it is priced at $7,650 without diamonds and $14,700 with diamonds. hermes.com