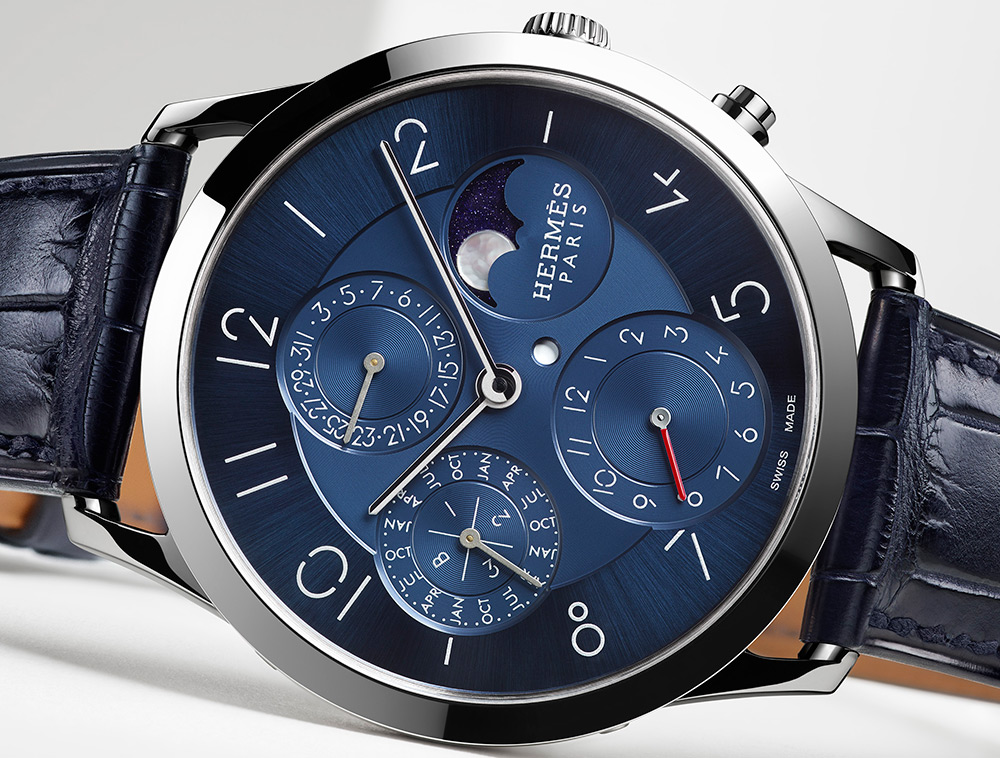 For 2017, French high fashion and luxury goods manufacturer Hermès introduces a platinum version of its perpetual calendar watch, the Hermès Slim D’Hermès Quantième Perpétuel Platine. The brand released an earlier rose gold model, so while we are not talking about an outright novelty, it is a chance to discuss a watch we have not covered before. It also, once again, inevitably raises the always lively debate regarding fashion brands’ legitimacy as watchmakers. But we’ll mostly stick to discussing the watch itself. To their credit, Hermès is too proud to be content relying on its name recognition to sell only quartz fashion watches, but insists instead on making some distinctive and interesting pieces with specs to satisfy horological snobs. More known for making watch straps than watches, the last product from Hermès we covered was actually the high-end leather bands they made for the Apple Watch. Hermès, in fact, produces high-end watches that are often distinctive for their signature whimsical touch in terms of style and design, and even in terms of mechanics, such as the Le Temps Suspendu watch, as you might recall. The Hermès Slim D’Hermès Quantième Perpétuel Platine, on the other hand, has a lighthearted and minimalistic look with those playful numerals, but a traditional set of complications and serious horology going on behind the dial. The H1950 movement inside was developed by Vaucher for Hermès as an ultra-thin movement for use in the Slim d’Hermès line of watches. It features a micro-rotor for automatic winding, operates at 3Hz (21,600) with a 42-hour power reserve, and has a “sprinkling of Hs” on its hand-beveled plates and bridges. Other more basic watches in the Slim d’Hermès collection also feature the H1950 movement, so the perpetual calendar on the Hermès Slim D’Hermès Quantième Perpétuel Platine watch comes courtesy of an Agenhor module.

La Montre Hermès S.A. is the company’s watchmaking subsidiary based in Bienne, Switzerland, with a financial stake in movement-maker Vaucher. La Montre Hermès also acquired its own case and dial makers to claim fully integrated watch manufacturing capability – right down to the straps, of course. The way the different elements of the Hermès Slim D’Hermès Quantième Perpétuel Platine watch come together make this is a good picture of how the Swiss watch industry so often works. With a movement only 4mm thick (that’s actually 2.6mm plus the 1.4mm module), not to mention residing in the Slim d’Hermès collection, the Hermès Slim d’Hermès Quantième Perpétuel Platine watch is obviously going to be thin. Unfortunately, Hermès doesn’t provide the measurement on just how thin, but knowing that the 30m-water-resistant case is a discreet 39.5mm wide (same width as the three-hand Slim d’Hermès models), we can get some sense of its overall dimensions. The brand’s images do not include one of the caseback, but we are told that it provides a view of the attractively decorated H1950 movement. Aside from the time and perpetual calendar, the Hermès Slim D’Hermès Quantième Perpétuel Platine watch includes a moon phase indicator (as so many perpetual calendars do) with mother-of-pearl moon against aventurine sky, as well as a second time zone subdial in 12-hour format at 6 o’clock with accompanying day-night indicator window. It’s that small, round aperture at the subdial’s 12:30. Though I usually prefer to see a running seconds hand, and would also find a day-of-the-week indicator useful on a watch like this, we wouldn’t want to clutter things up too much, now would we? If you don’t know, a perpetual calendar keeps track of all the quirks of the Gregorian calendar, including varying number of days in a month and even leap years. So as long as you keep the watch running and in good condition, at least theoretically, it will stay accurate for a long time. It is too easy for watch enthusiasts to dismiss watches from brands like Hermès as fashion brands and miss out on some otherwise interesting products. These brands should have expertise in design, at the very least, and that is something some established watch makers sometimes could use a little more of. The Hermès Slim D’Hermès Quantième Perpétuel Platine comes on an Abyss blue alligator strap to match the blue dial for a price of €33,500 or US $39,900 (euros obviously being the way to go). hermes.com