Hermes Le Temps Suspendu Watch: Why Do You Suspend Time? 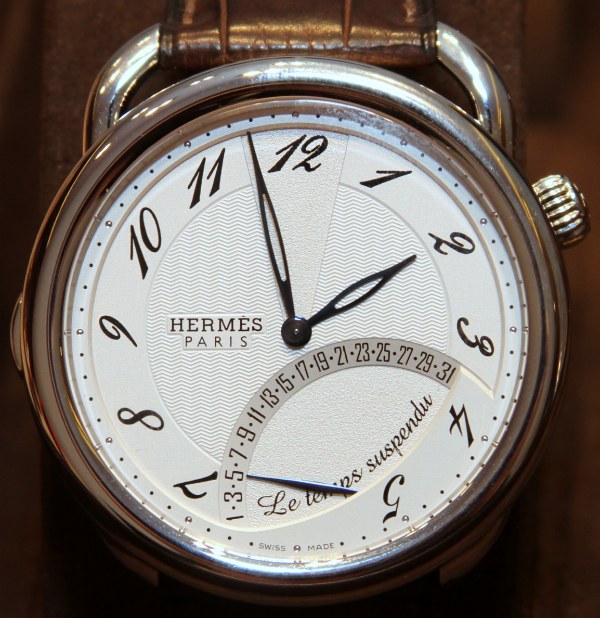 As Hermes fends off attacks from LVMH to retain its independence they also continue to push forward with their prowess as watch makers. For 2011 their horological focal point is the Arceau Le Temps Suspend” watch. That literally means “time suspended,” and that is exactly what it does.

The watch has been in development for a few years now. Mainly because they couldn’t get it to work until they enlisted Mr. Fix-It Jean-Marc Wiederrecht. For me Jean-Marc will always primarily be one of the MB&F “Friends.” The time suspended complication isn’t that complicated to understand. The watch normally has the time with a retrograde date display. Press the pusher on the left side of the case and the hands jump to a rigid rabbit eared position…. and just stop moving. Inside the watch, the movement still keeps track of the time, but you can’t see it on the dial. Press the pusher again and the time returns to normal. Child’s play. 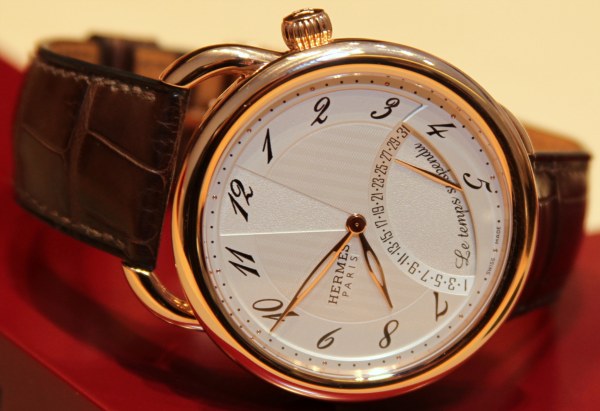 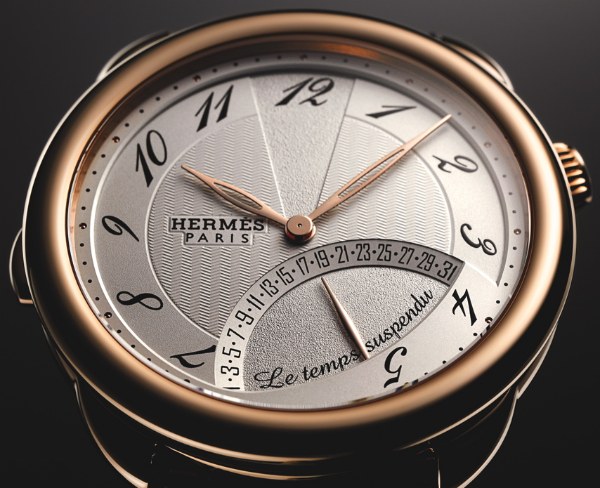 Wiederrecht assured me that the system was reliable and durable. Meaning you can using it again and again without it breaking. Such an assurance from him has a lot of weight in my book. But still, why? After seeing the watch I complimented Hermes on a job well-done and said it was “cute.” Cute is great, but who will use it? I just wasn’t convinced of the marketability of this novelty, but I wanted to give Hermes the benefit of the doubt. So I needed to discuss the watch and its time suspending complication a bit with other people who could rationalize it to me. Hermes seemed pretty convinced that this watch was the next big thing, so why did I assume it was just a toy?

Hermes didn’t like my dismissal of their new toy at all. Especially since it was the watch they needed people to focus on this year. The watch itself comes in a 43mm wide case in steel and as a limited edition of 174 pieces in 18k rose gold. The Arceau style case has a more pronounced lug structure on the top and suavely curved numerals that seem to run around the dial. You can get it with a silvered or black dial – each decorated with pleasant textures. The asymmetrical dial  is interesting and still feels balanced. The retrograde date dial is surprisingly easy to read and I like how the hands seems to come out of nowhere. Inside the watch is an automatic mechanical movement with the special time suspended module that was specially developed for the watch. It is actually a good looking timepiece, even without the complication. 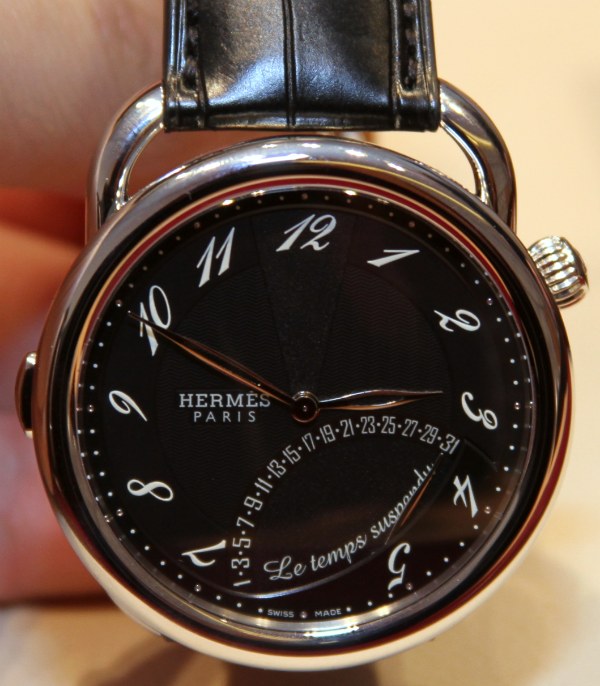 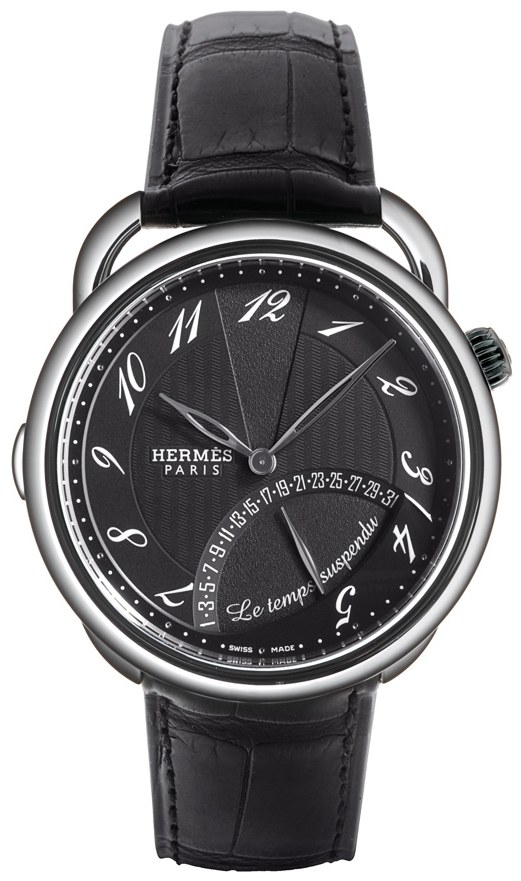 I ran into Jean-Marc and he was wearing the Le Temps Suspendu watch. He was just strolling around looking at watches. I wonder how much publicity the relationship with Hermes will give him. Or rather, I wonder what effect it will have on his career. Guys like this are the backbone of the modern high-horology watch industry. The brains behind the watches that we all love to love.

It didn’t take long before I started talking about Hermes, and the watch. His take on it was very simple – it is a toy. Just as I suspected. Oh, but not just any toy, a fun one. He claims to be addicted to mechanically pushing the time suspending button and playing with the watch. A little novelty seems to go a long way. When people all wore manually-wound mechanical watches you could satisfy nervous fidgeting just by winding your watch. I am waiting for a complication to come that allows you to artificially drain a mainspring barrel just so that you can wind it again. As we mostly wear automatic or quartz watches these days, we need other things to fidget with. Checking your text messages is fine, but few things can replace the simple pleasure of a shiny little button that clicks. Le Temps Suspendu has one of those and if you wear one you’ll find your finger on it a lot. So for Jean-Marc, the watch offers a satisfying way of getting to press a button and have something meaningful happen – again and again. 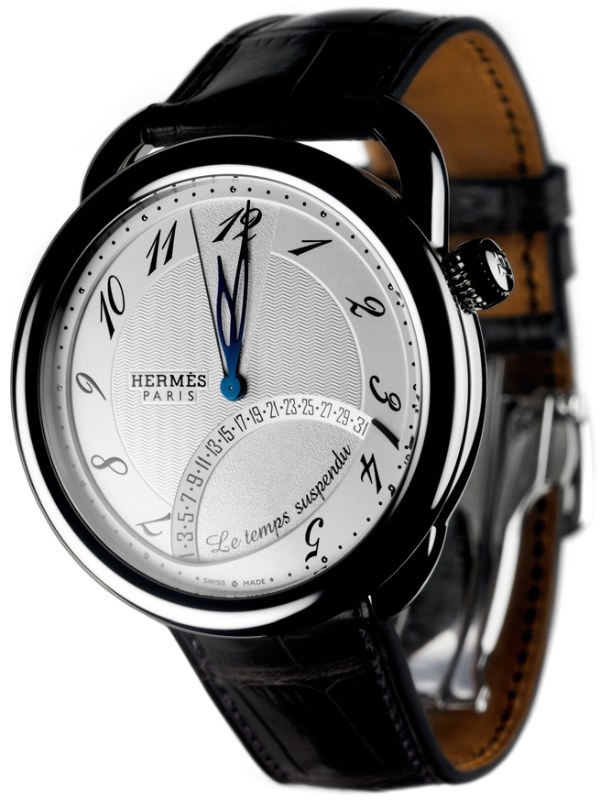 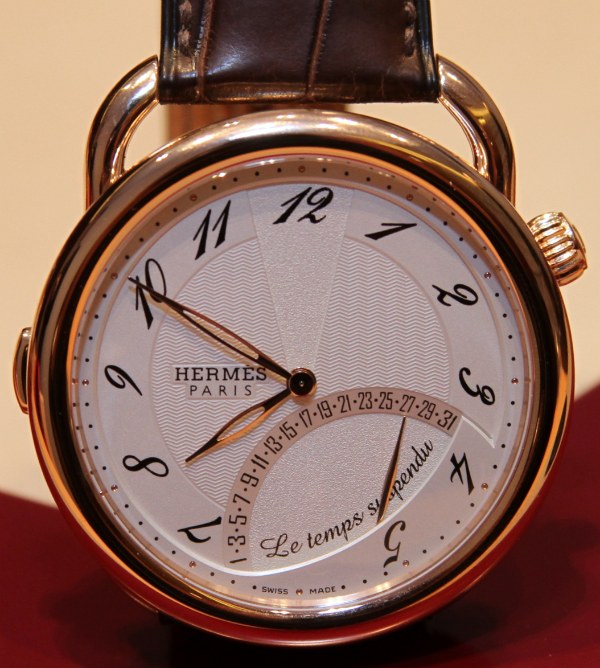 Another wise man offered a perhaps more romantic explanation for the “poetic complication.” I’ll honor him by maintaining his anonymity, but he knows who he is. In his typical confident lectatorial tone, he promptly responded to the question of “who will use the watch” with a simple “it will get you laid.” Will it now? He seemed sure enough of this fact that I wondered how recently the watch in fact did get him laid. I had to consider this opinion of the watch’s utility. Was the Hermes Le Temps Suspendu watch the ultimate pick-up tool?

The idea is that a woman will respond positively to the emotion in the concept of the watch. It is also a good conversation starter. “My dear, please allow me to adjust my watch. In this moment I desire for time to stand still. There can be no schedule distracting me from our time together.” At this point you lift up your sleeve to reveal your Hermes watch that ideally matches an orange cream tie with walruses on it, and large “H” belt buckle. You get extra points if she activates the watch for you. Maybe this wise man is right – in an hour you can have her in bed, and you’ll be thankful all along you wore the right watch that evening.