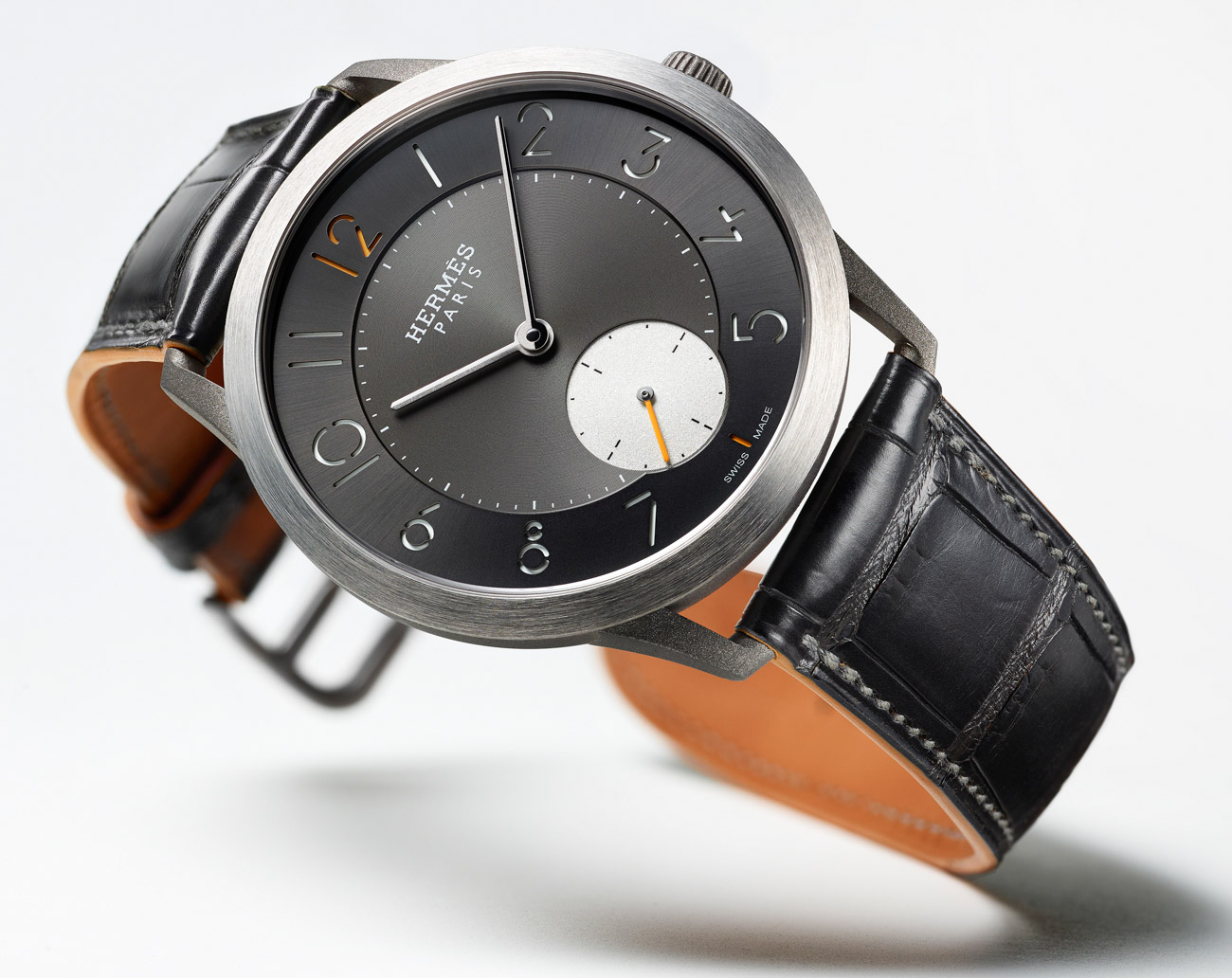 At SIHH 2019, Hermès gave me a sneak peak at this “Slim d’Hermès Titane” watch, which is a titanium version of the Hermès Slim in steel that has a full aBlogtoWatch review here. Hands-on images should follow in a forthcoming aBlogtoWatch article. More or less priced within earshot of the steel model, the titanium version of the Slim d’Hermès has a slightly sportier look that is still slick and elegant in the way a modern dress watch should be. Certainly, this is a fashion watch, but one of a high pedigree in both construction and design.

Part of highlighting the Slim d’Hermès overall, with the release of the Titane we see Hermès making a case for the two-piece “sandwich-style” dial that has a bottom layer with lume and a top layer with stencils for the numerals. This stencil-style design was also likely the inspiration for the stencil-style font, which is what really helps make the Slim d’Hermès such an iconic-looking modern timepiece. It is very rare to see sandwich-style dials on non-sport watches and, in person, these also allow the Slim d’Hermès watches to look their best. 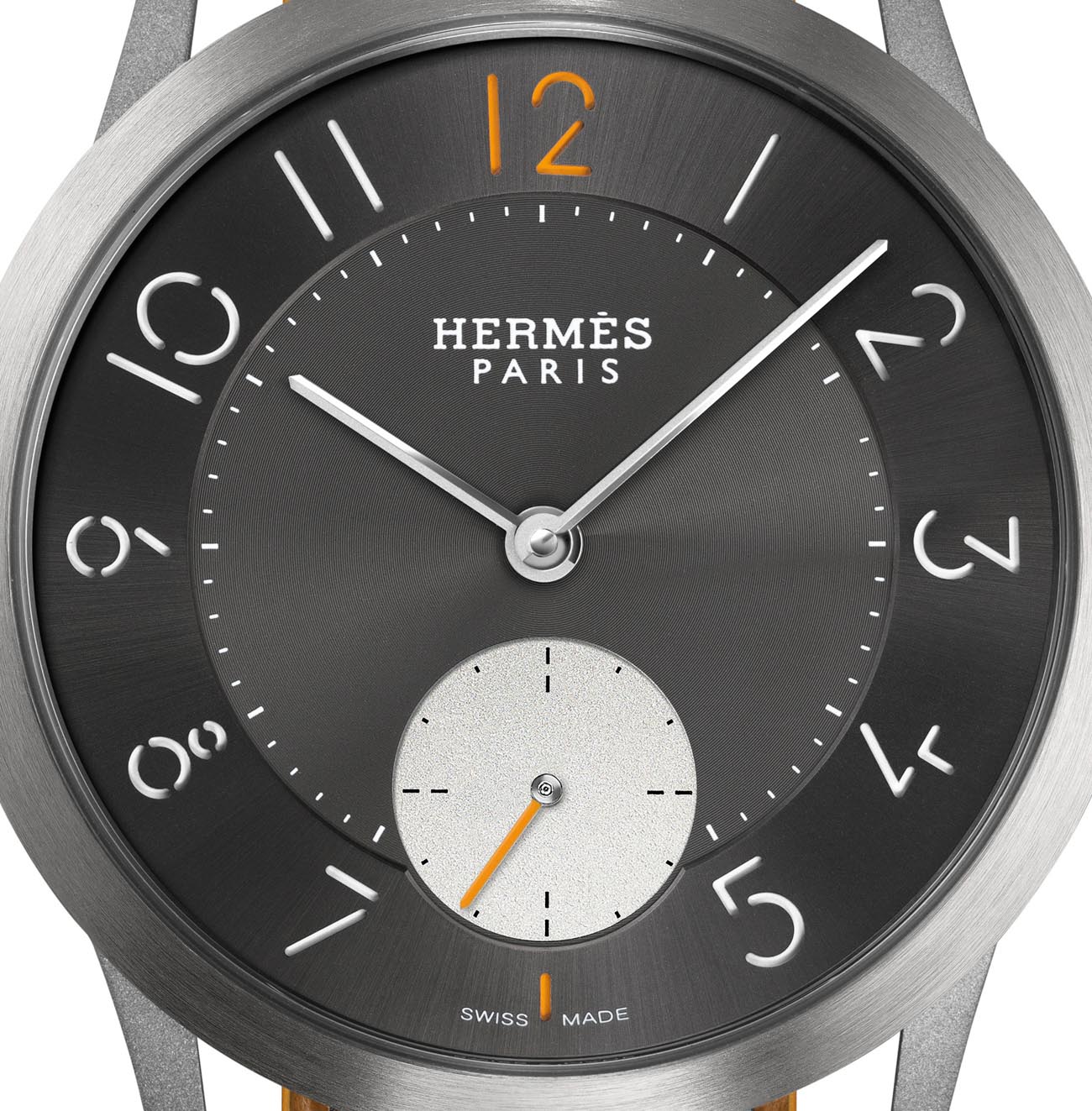 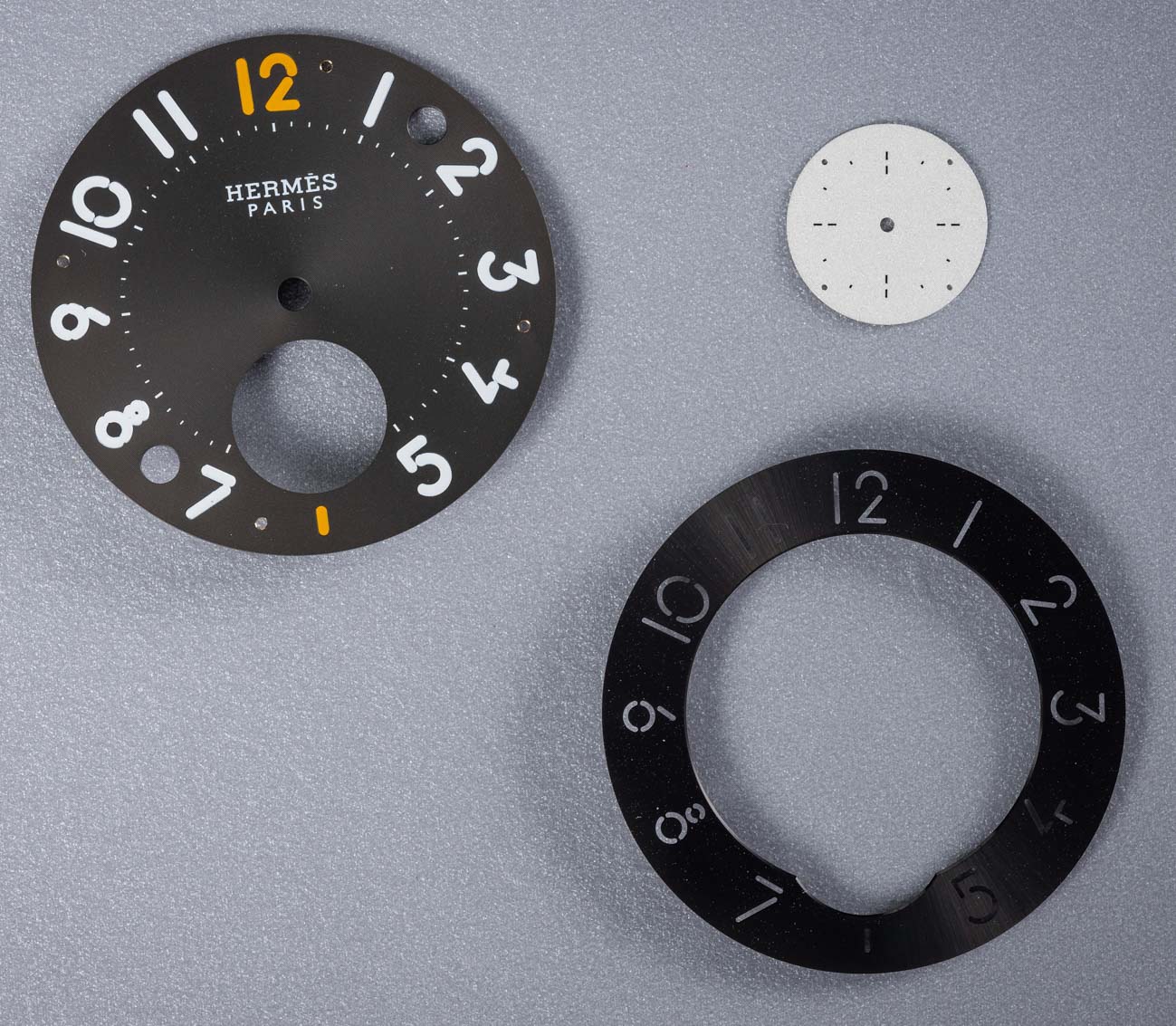 It might be easier to associate the design of the Slim d’Hermès Titane with modern manufacturing or architecture, as opposed to strictly sports themes. This is a designer’s watch, after all, and not an adventure timepiece. It is meant to be worn in urban environments where similar shades of gray and steel abound. Hermès’ signature orange branding colors are represented on the inside lining of the Hermès alligator leather strap, as well as selectively on the dial of the Slim d’Hermès Titane watch, itself.

The Slim d’Hermès watch was originally designed by Hermès in 2015 by creative director Philippe Delhotal. I believe the still-novel nature of the collection means that it will take a few more years to gain traction — because the collection is more immediately adopted by collectors — but, in my opinion, this type of timepiece has a lot to offer. Assuming you have room in your collection for a 39.5mm-wide dress-style watch, the combination of elegance, branding, wearing comfort, and authentic luxury construction make the Slim d’Hermès  a winner. The titanium version will be a bit harder to sell for Hermès, given that such a watch doesn’t immediately fit a popular timepiece theme. As I said above, the Slim d’Hermès  Titane isn’t a sport watch nor is it a traditional dress watch. It is an urban high-design watch, and it’s for aesthetic lovers who enjoy a bit of luxury branding in their attire (and who can afford it). 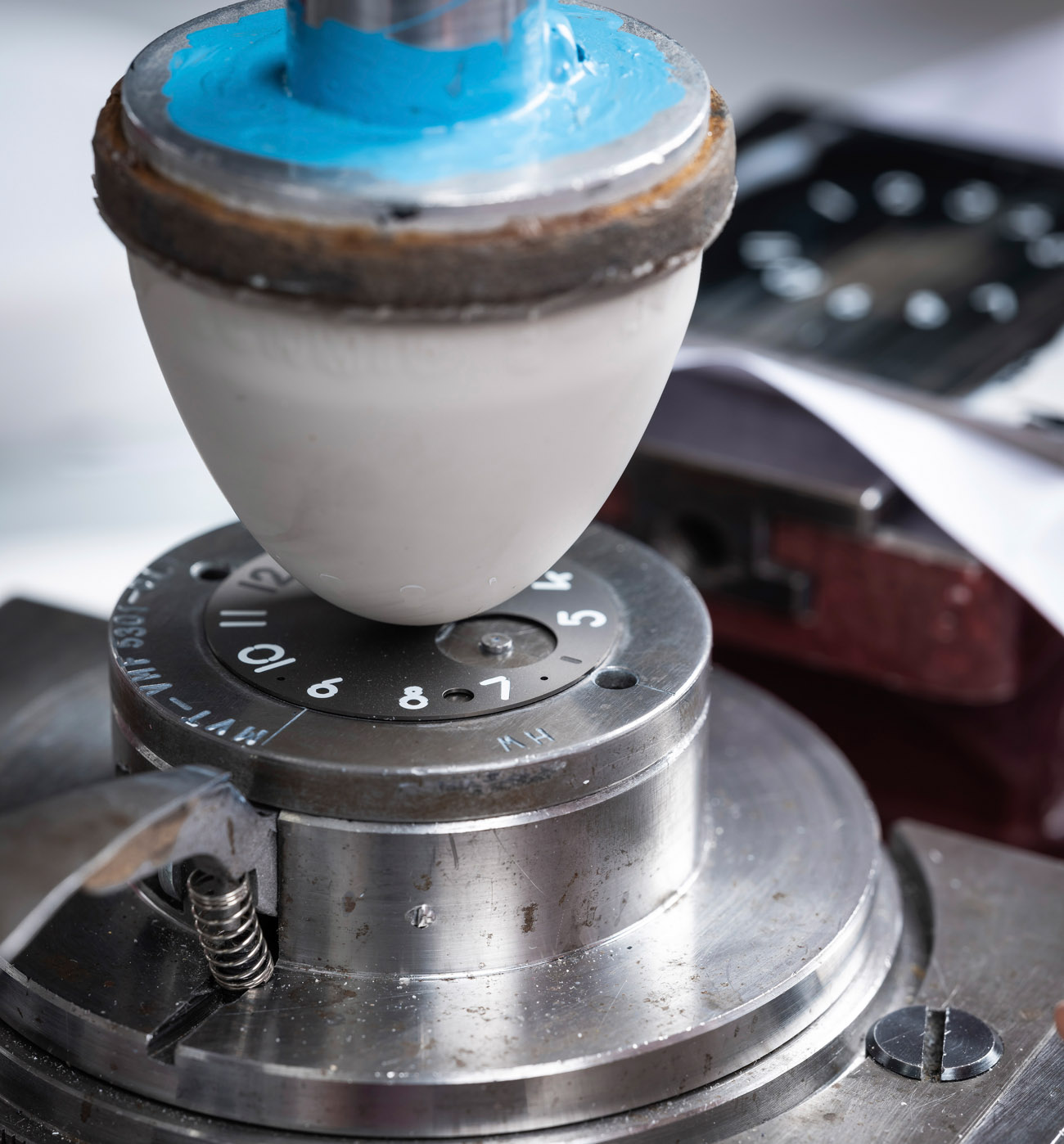 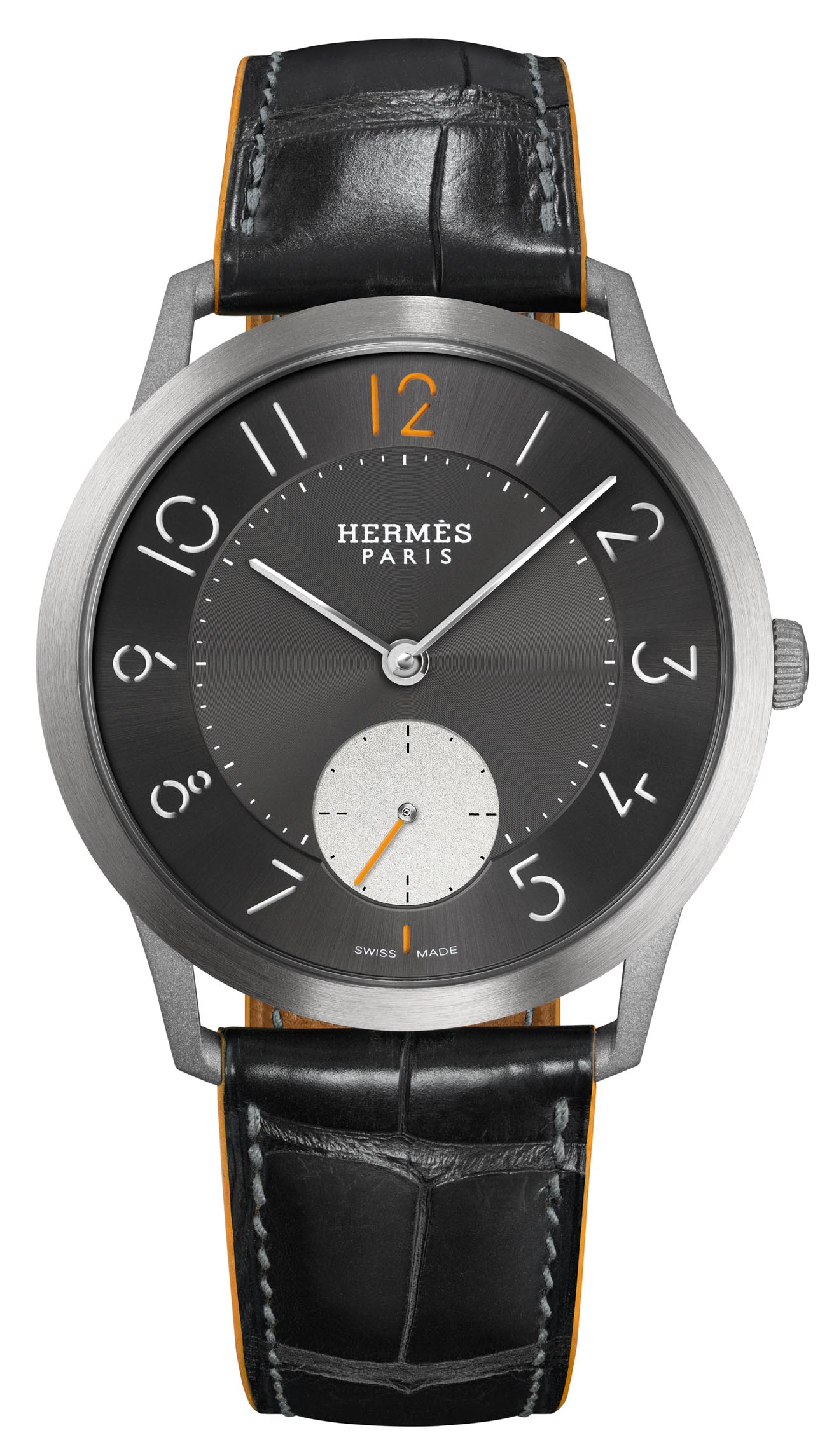 Sized at 39.5mm-wide and 8.2mm-thick in grade 2 titanium, the case is mostly brushed and water resistant to 30 meters. Inside the watch is a Vaucher automatic movement that Hermès re-brands the caliber H1950 and includes its signature repeating “H” pattern on the movement bridge surfaces, which can be observed through the sapphire crystal caseback. The movement sports a micro-rotor as part of the automatic winding system and operates at 3Hz with a power reserve of 42 hours. Emotive and practical, the Slim d’Hermès  Titane has a retail price of $8,050 USD. Learn more at the Hermes website here.