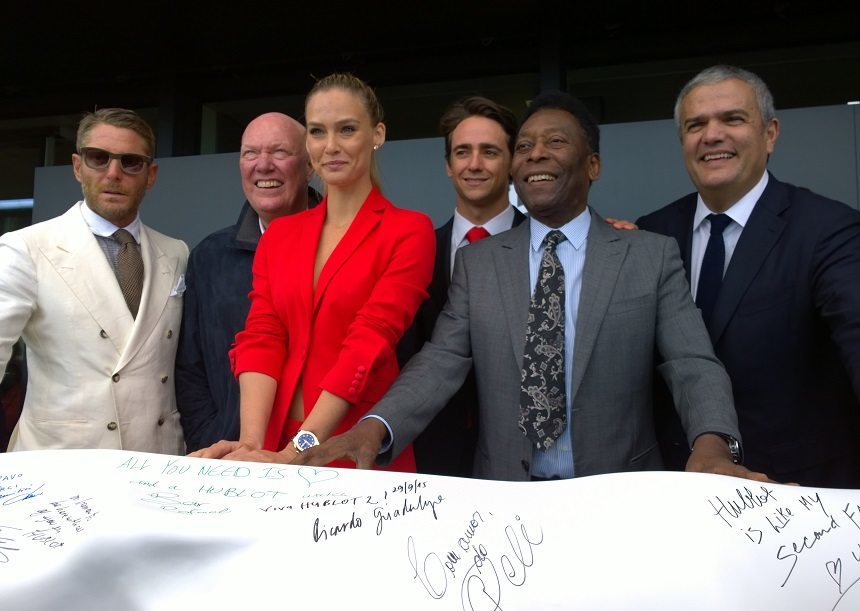 Grand Opening Of The Hublot 2 Manufacture In Nyon, Switzerland

Tuesday, September 29th 2015, saw the official opening of Hublot 2, Hublot’s new workspace that adds a massive 8,000 m² to their operational space. Located in Nyon, a literal stone’s throw from Hublot 1 (built in 2009), Hublot 2 will enable the brand to delve deeper into the manufacturing process, conduct more essential research and development, and increase their assembly and after-sales production – a pressing necessity given the explosion of popularity the brand has enjoyed over the past decade. 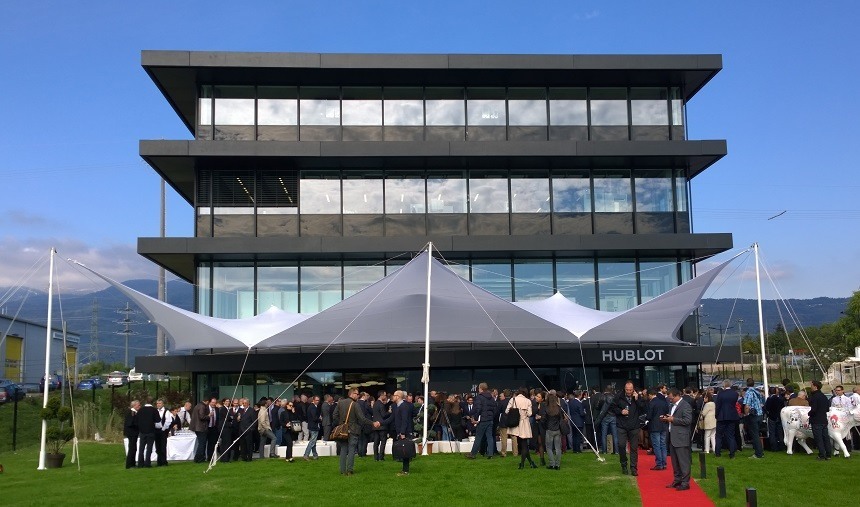 Standing next to, but most certainly not in the shadow of, Hublot 1, Hublot 2 is larger than its predecessor and perhaps even more ambitious. It would be too clean cut to suggest Hublot 2 will be “superior” to Hublot 1, rather this new build is a site expansion that will enable Hublot to split the responsibilities of their buildings as they see fit. 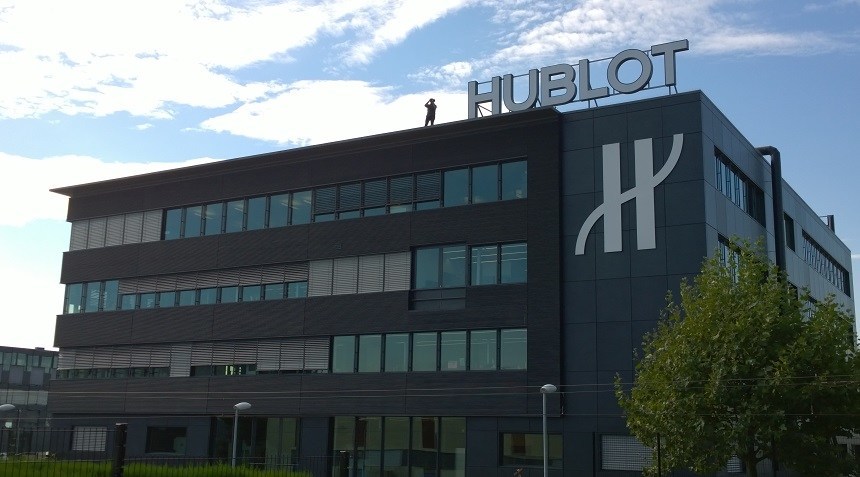 …and the “original”, Hublot 1 manufacture.

A good deal of Hublot 1 has been migrated to Hublot 2, which currently houses the bulk of in-house manufacturing equipment. The eardrum-numbing hum of several CNC machines dominates the first floor of Hublot 2. Skilled machinists work tirelessly to ensure each component is precisely engineered to Hublot’s exacting standards. Despite not being that old in watchmaking terms, Hublot’s name is synonymous with quality. Throughout its 35-year history, Hublot has perhaps been more widely associated with bold design, but this new facility shows that the brand is serious about growing its reputation as a serious innovator in the horological market. 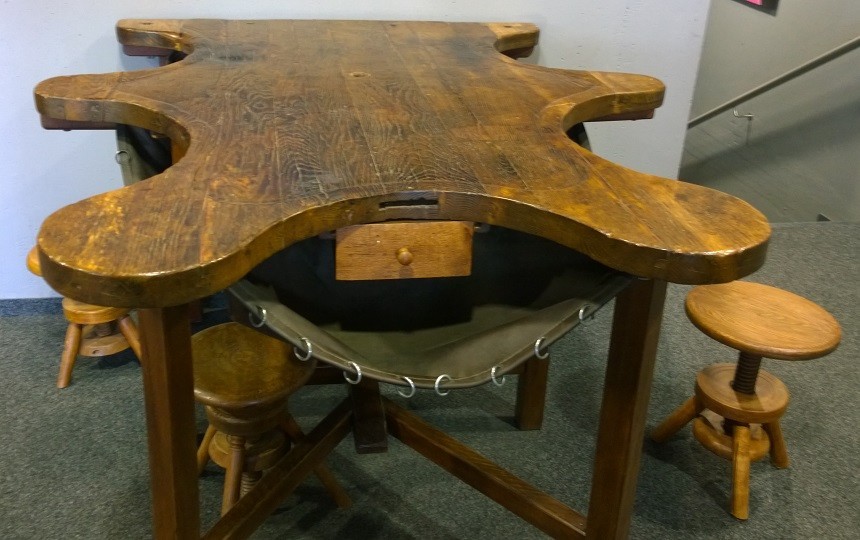 An ancient watchmaking bench on display in Hublot 1

Just one year after ground was broken on the site, Hublot 2 is a structural testament to the brand’s own personal Big Bang. Hublot 1 was only opened in 2009, but was quickly outgrown by the brand, which only opened its first named boutique in 2007, yet now boasts 73 such outlets worldwide. Designed by Nyon architectural firm Coreta, the new site will allow Hublot to install 100 new work stations over the next five years, and grow its local workforce to 400 people. 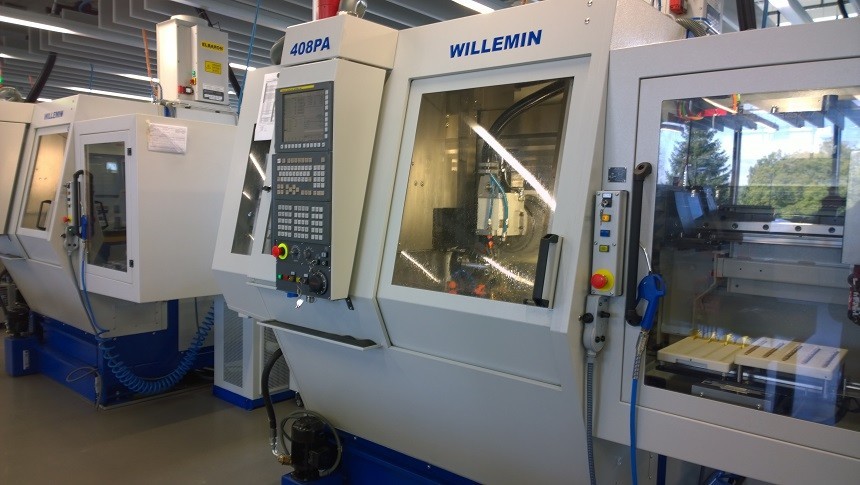 The event to celebrate the opening of Hublot 2 was a great success. With over 300 friends of the brand, VIP guests, horological dignitaries, and journalists in attendance, the day was a light-hearted, but extremely ardent affair. Jean-Claude Biver, CEO of Hublot, took to the stage to gee-up the crowd. Joking that people follow Hublot as they would a religion and still support the brand despite them producing a watch that cannot tell the time (in reference to the all black Big Bang, which Biver reputedly finds impossible to read), the crowd responded with whooping cheers.

“If you want soul on your wrist, only Hublot can give it to you. That is the magic of our watchmakers: They are the artisans of the soul; they give birth to the soul… And that is why people are addicted to Hublot… Don’t buy one! Be careful! You will get addicted and you will buy a second one, and a third one, and then we will have to open another manufacture!” Jean-Claude Biver. 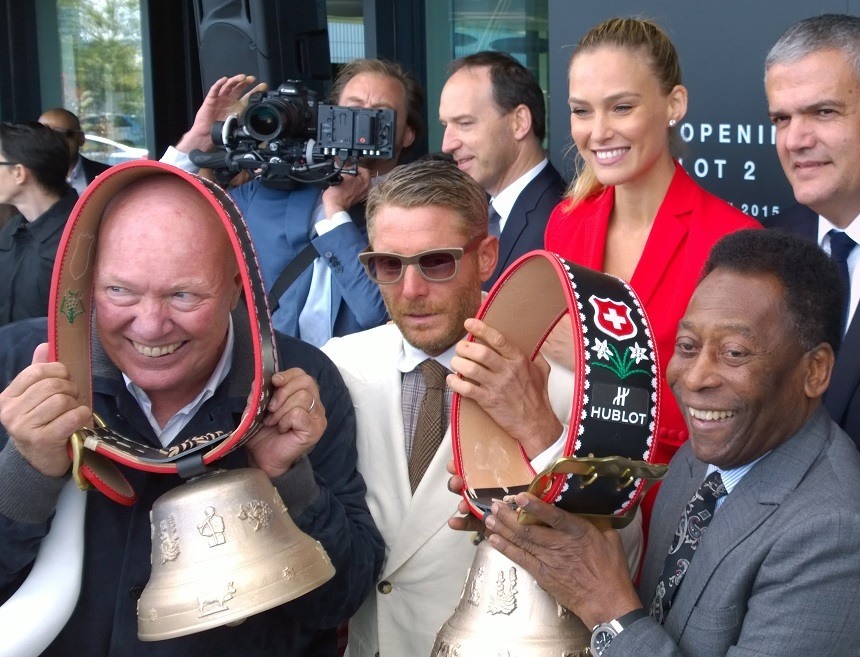 Also in attendance, were three of the brands best-known ambassadors. Soccer legend Pelé was present and the focal point of many photographers’ lenses. Even the striking beauty of supermodel Bar Refaeli struggled to tear attention away from the septuagenarian superstar (although don’t be surprised to see her gracing most of the press photos – she somehow managed to look elegant while munching on the ceremonial cheese that was cut in honor of the new building). Alongside this unusual, albeit superb pairing, was Lapo Elkann – a man whose life and style set him apart from the crowd. Dressed in a pale cream suit, the Italian heir to Fiat injected a huge amount of vitality into proceedings. With the energy and ear-to-ear grin of a child confronting Santa Claus on Christmas morning, Elkann joked with and hugged Pele, clearly taken by the man. Of the three, it is Elkann whose relationship with Hublot has been most hands-on: He was involved in the design of the Hublot Big Bang Unico Italia Independent, which bears the name of his fashion label. Not only is the Hublot Big Bang Unico Italia Independent cool (as one might expect given its designer), it utilises a new material called Texalium. The material is created by building up layers of carbon fibre (which is a textile), before a final layer of woven aluminium, which is then anodized (in this case, a regal Italian blue). 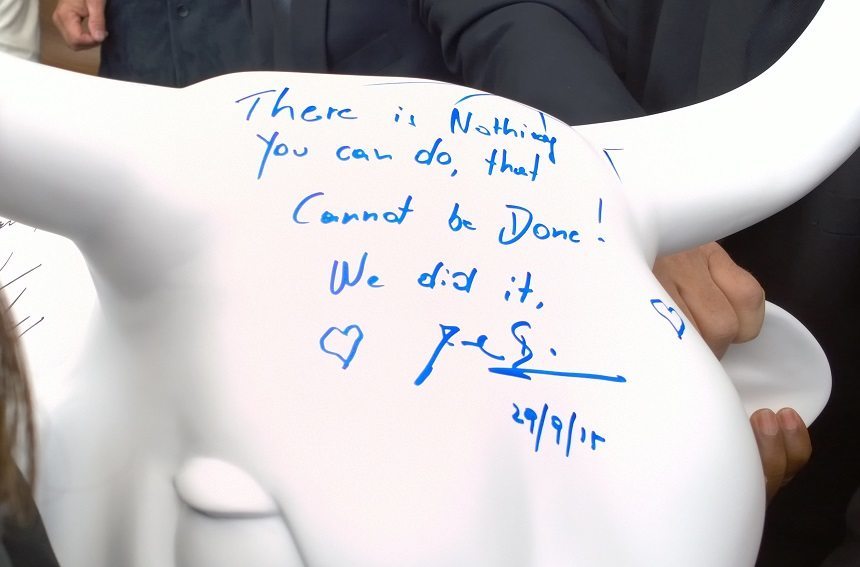 If I learned one thing about Hublot it is that the brand wants the world to see it for what it is – a serious contributor in the field of resistant aesthetics and material diversity. Oftentimes, Hublot’s are dismissed as the flashy wrist-fodder of footballers and rap stars, but having been there, visited the factory, spoken with the workers, there is not a shred of desperation to drag their image away from that. I don’t think anyone at the company is worried, because there is a quiet confidence in the quality of their output. And so there should be!

With materials like Texalium, Magic Gold, pigmented ceramics, crystallized gold, and osmium to name but a few, there is definitely something different going on in Nyon. Something worth paying attention to. With so much more space and control over the production of new components, the opening of Hublot 2 could mark a momentous shift in gears for this young and vibrant brand. hublot.com