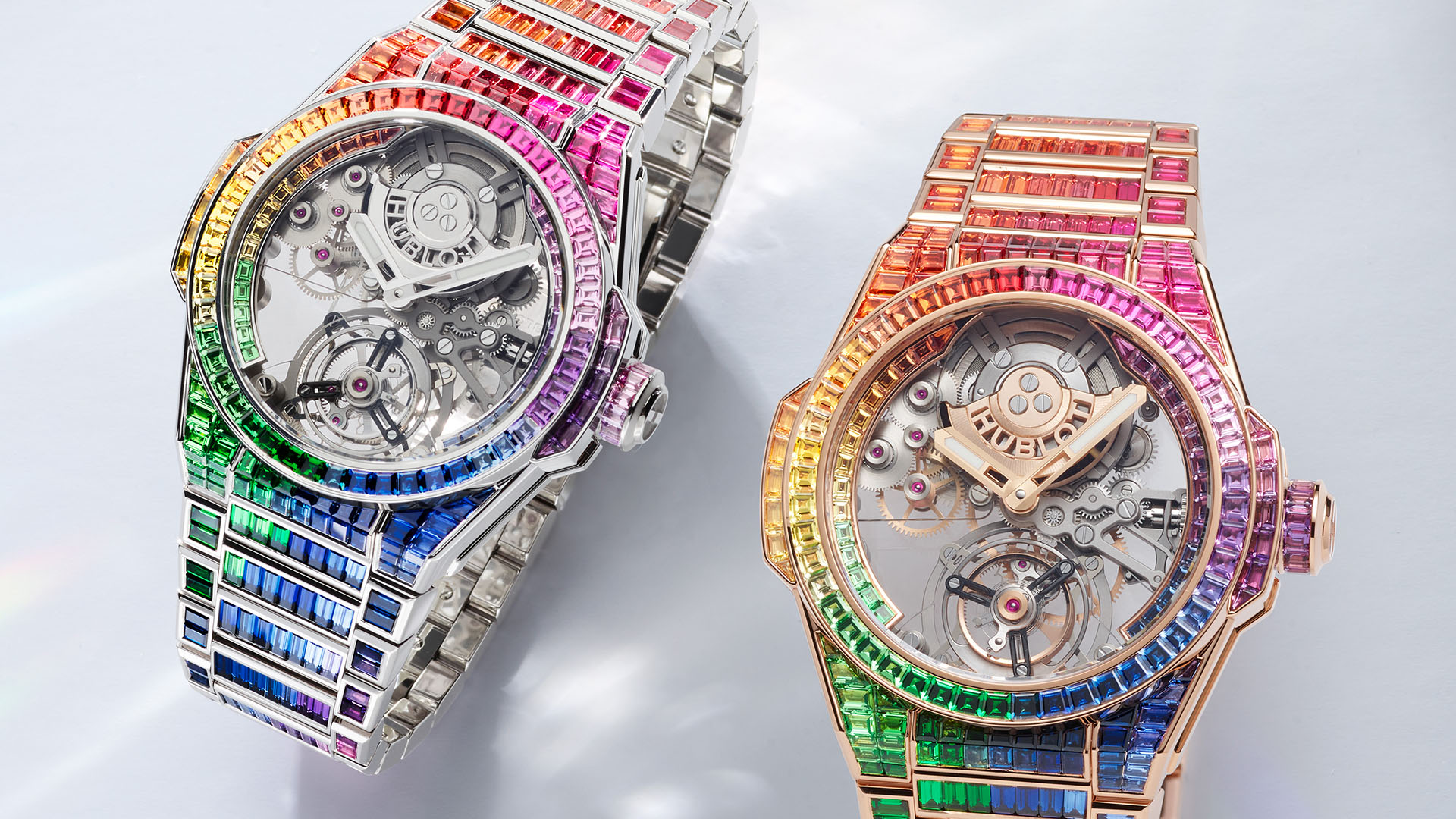 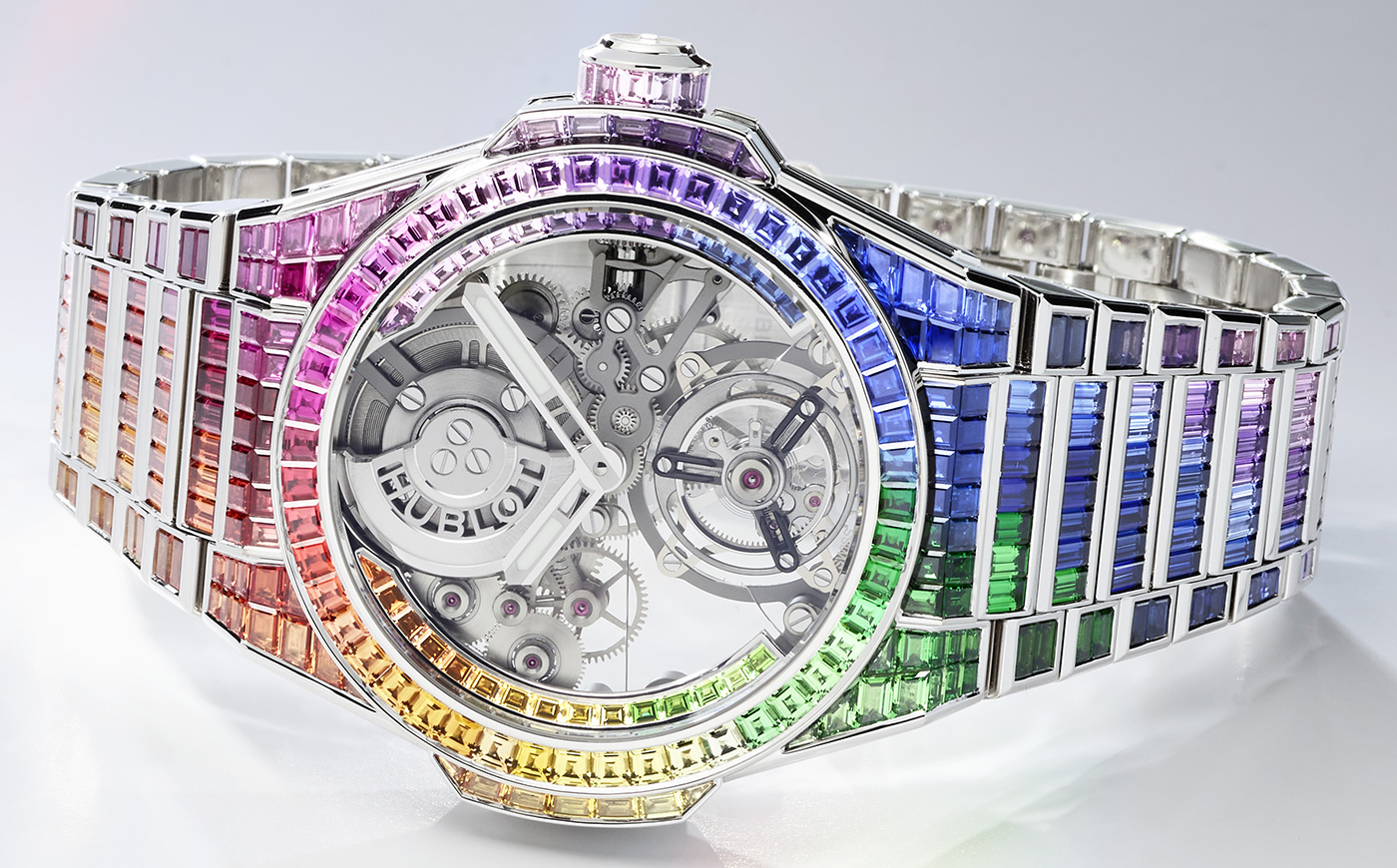 Much of modern luxury watch design exists in the realm of safe decision-making. By and large, many timepieces are designed to offer as broad an appeal as possible, avoiding any possibility of offending enthusiast sensibilities. Hublot has never subscribed to this approach, instead has sttod by a loudly defiant visual spirit that prizes spectacle above all else. For its latest release, the brand takes this spirit of spectacular defiance to new heights, combining some of its most in-your-face gem-setting work with a show-stopping skeleton dial design and a tourbillon movement crafted for maximum visual drama. The new Hublot Big Bang Integral Tourbillon Rainbow is deliberately not for everyone but offers one of the brand’s most extravagant visual and mechanical creations to date. 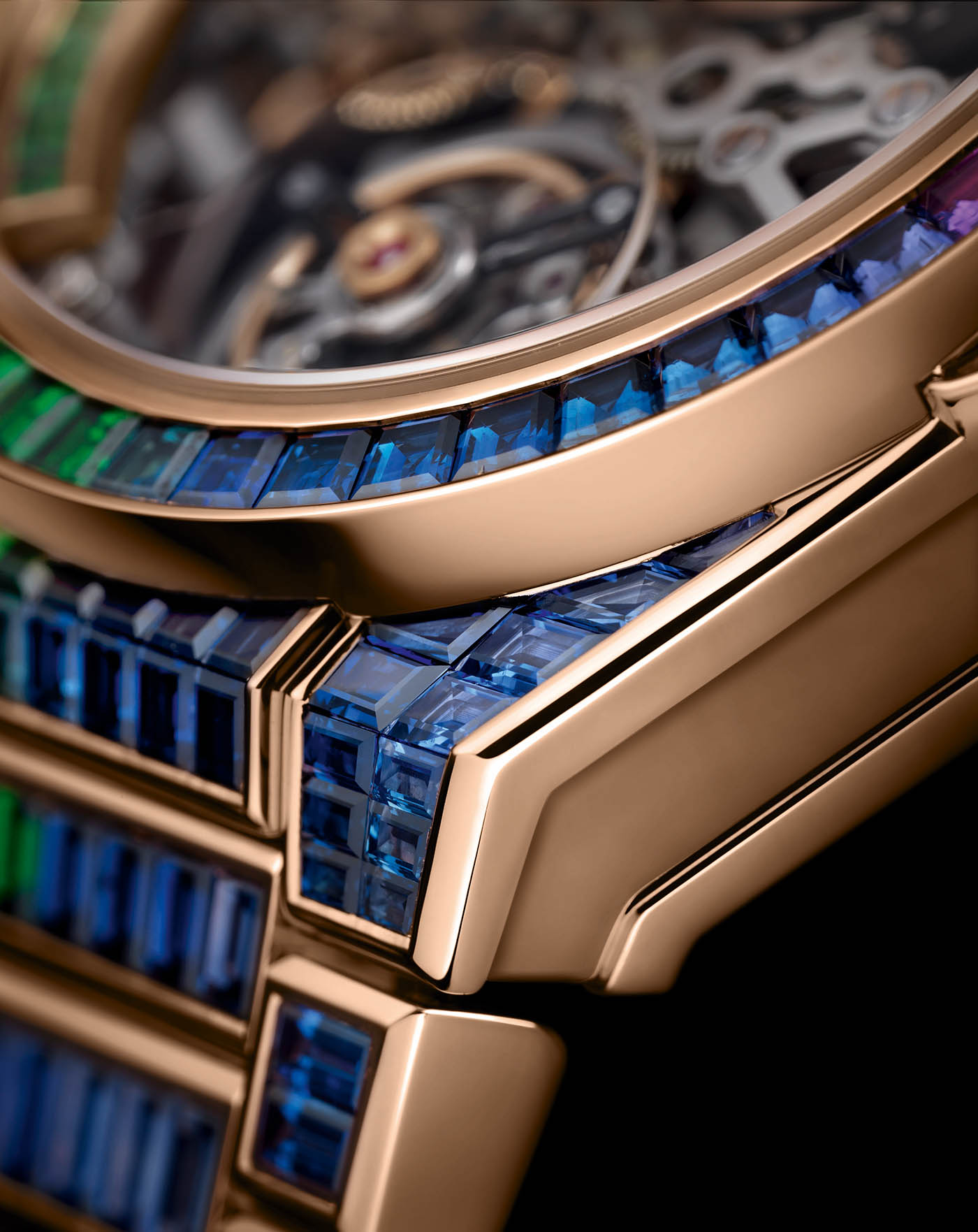 The multifaceted integrated Big Bang case is a cornerstone of Hublot’s modern lineup, appearing in a wide array of sizes, finishes, and materials. For the Hublot Big Bang Integral Tourbillon Rainbow, however, the brand delivers what may be its wildest iteration yet. Measuring in at 43mm and rendered in 18K white gold or the brand’s proprietary 18K King Gold alloy, the top side of the case, lugs, bezel, and the crown are all fully encrusted with 150 baguette-cut precious stones including red rubies, pink sapphires, amethysts, blue topaz, green tsavorites, yellow sapphires, and orange sapphires. Simply gem-setting a watch case of this size and complexity is no mean feat in and of itself, but each stone is carefully hand-selected for color to create an unbroken rainbow spectrum across the case in a process that totals over 1200 man-hours. To preserve the integrated bracelet design, the rainbow gradient pattern extends fully through the gem-set bracelet, creating a continuous spectrum running all the way around the wearer’s wrist. While this gem work provides an undeniably theatrical look in images, the Big Bang Integral Tourbillon Rainbow’s cutout case sides remain gem-free for a contrasting mirror-polished finish. For both the white gold and King Gold models, Hublot completes the case with a sapphire display caseback to preserve the dramatic floating look of the skeleton movement. Although the water-resistance of the Hublot Big Bang Integral Tourbillon Rainbow is rated at a feeble 30 meters, it’s unlikely that any of these hyper-valuable models will ever see open water. 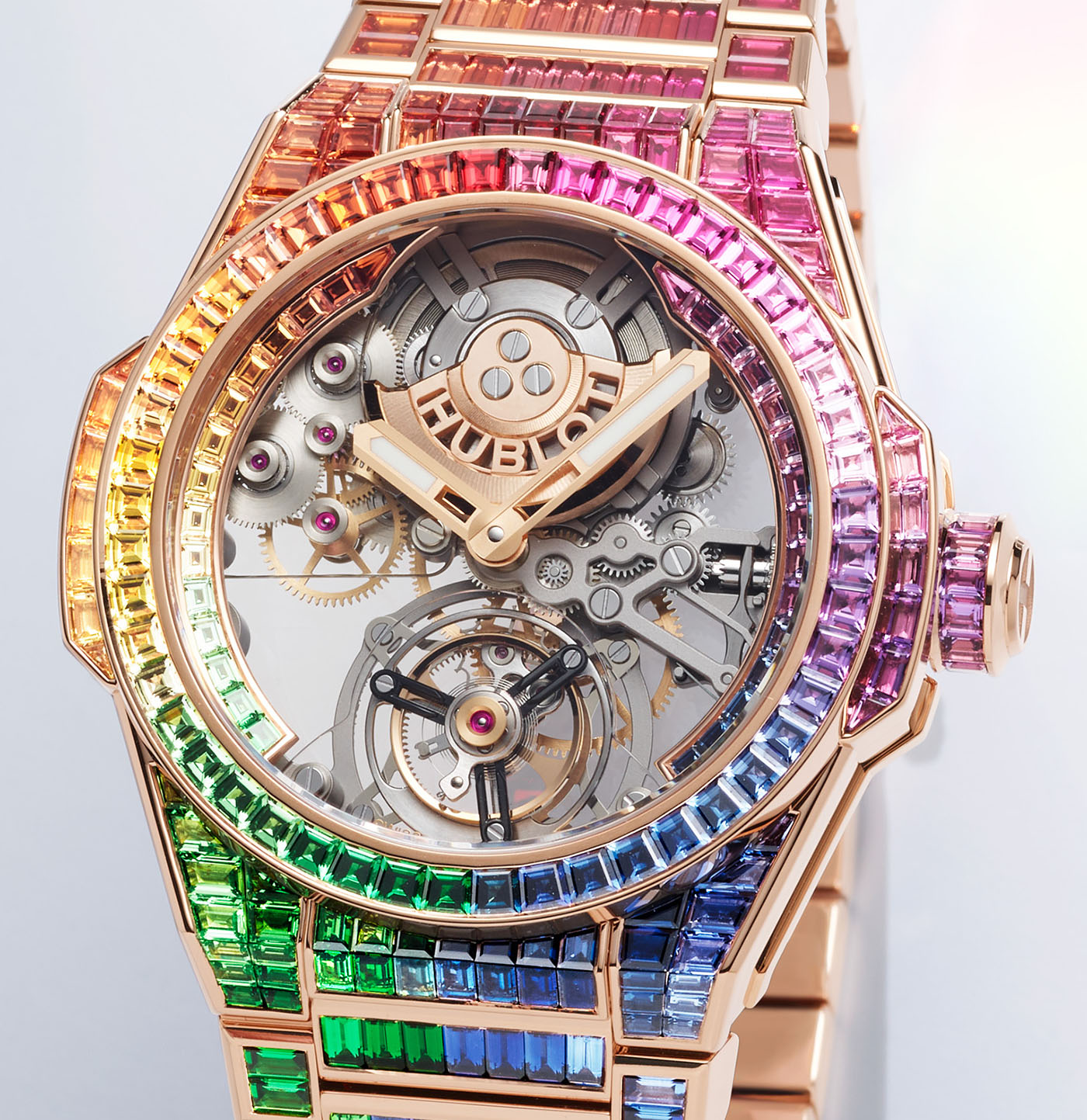 Strictly speaking, the Hublot Big Bang Integral Tourbillon Rainbow does not have a dial; it gives the view under the sapphire crystal over almost entirely to the skeletonized tourbillon movement within. Outside of two partial rehauts on the 3 o’clock and 9 o’clock side of the case with a further 30 baguette-cut gems to continue the rainbow gradient pattern, the only concession to a dial or functionality, in general, is the Big Bang line’s signature broad semi-skeleton handset. Everything else is given over to the movement, which thanks to a series of three stealthy clear sapphire bridges gives the impression of a fully floating gear train in images. The floating gear train effect is only the beginning of the movement’s visual spectacle, however, as the visual weight distribution is mostly balanced between elements at 12 o’clock and 6 o’clock. The 12 o’clock mainspring barrel is topped by a bumper-style engraved rotor in either 18K white gold or 18K King Gold, offering the Big Bang Integral Tourbillon Rainbow’s only overt branding. This is counterweighted by the 6 o’clock tourbillon, with a clean circular bridge and relatively simple three-spoke cage. Every other movement element is designed to be as light and airy as possible in initial images, from the slender ruthenium skeleton bridges to the thin and open gear train. 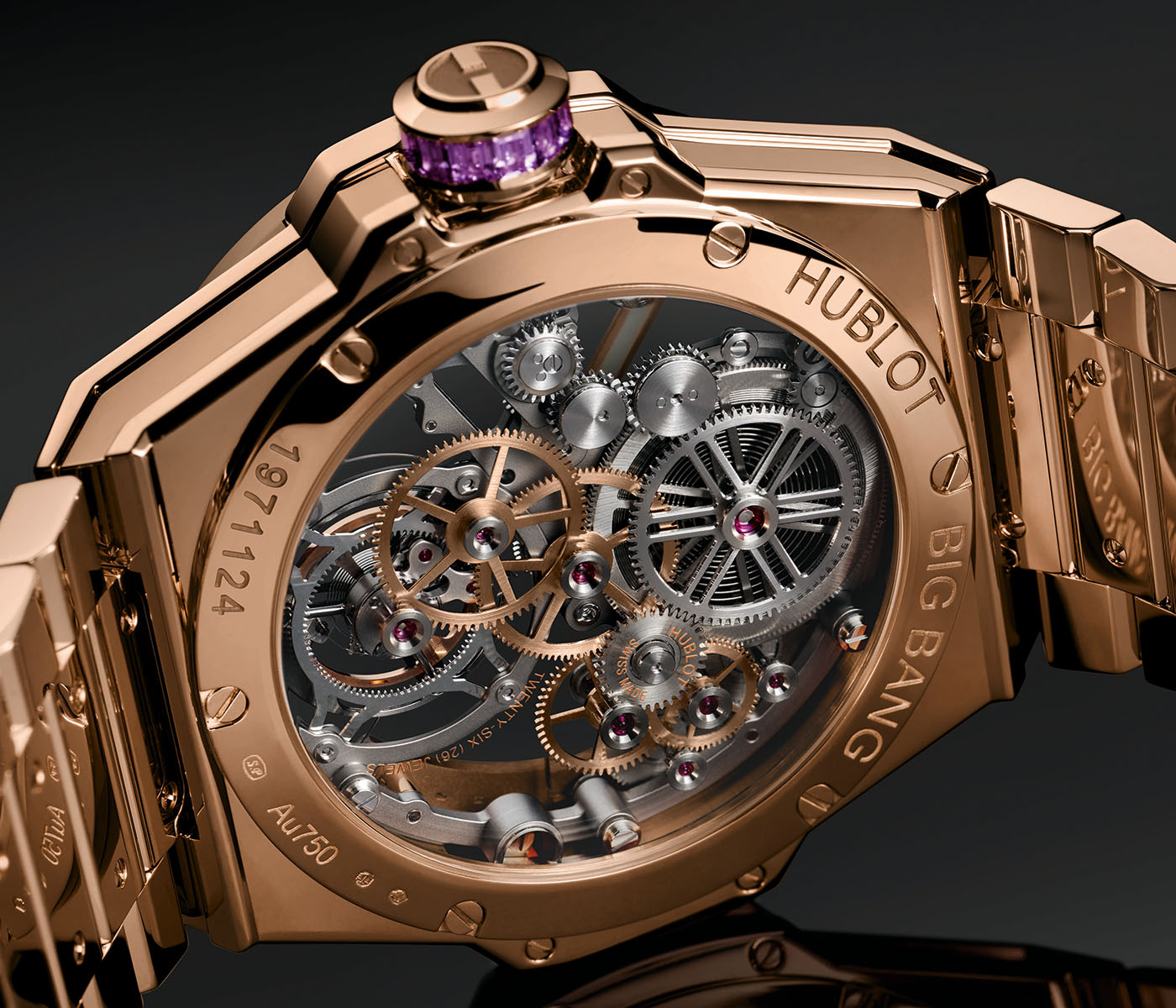 Viewed from the caseback, the manufacture HUB6035 automatic tourbillon movement inside the Hublot Big Bang Integral Tourbillon Rainbow follows a similar visual philosophy as the front with dramatically different results. Here, the focus is on the gear train, and these elements offer a greater sense of complexity in images compared to the front side. Here, the brand also puts a spotlight on its finishing techniques, as the jewel sinks all feature brilliant polished chamfers. In terms of performance, the HUB6035 offers 72 hours of power reserve at a 21,600 bph beat rate. 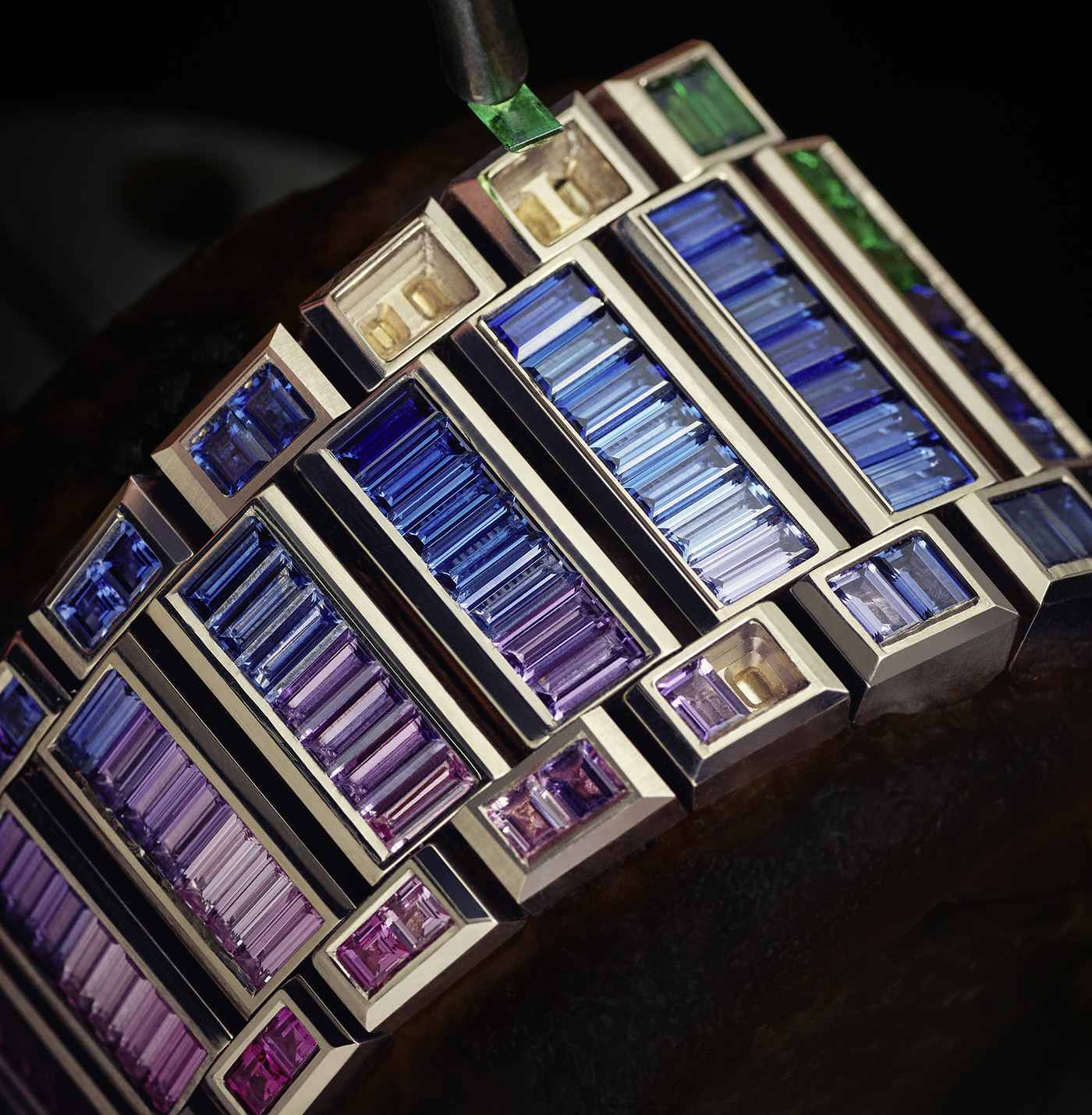 Even more so than the case, the integrated bracelet of the Hublot Big Bang Integral Tourbillon Rainbow is a showcase for pure unadulterated gem-setting spectacle. With 304 invisibly set baguette-cut gemstones totaling 23.6 carats in weight, the sheer volume of jewels on display is impressive in its own right, but the continuous rainbow spectrum winding its way diagonally around the bracelet gives the design an opulent new layer. Both the bracelet design and the rainbow pattern flow seamlessly into the case in images, and even the butterfly-style deployant clasp is fully hidden by the continuous pattern. 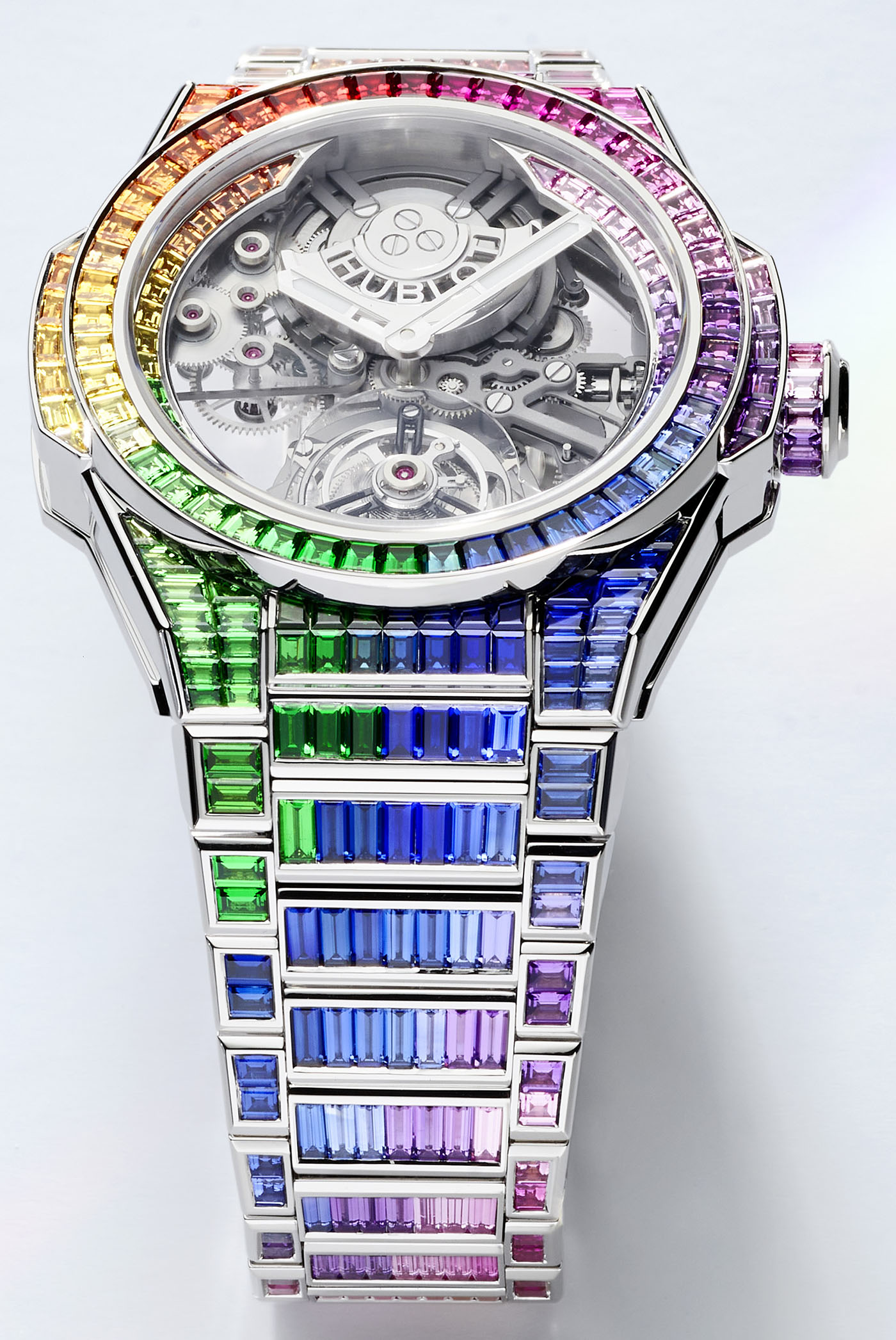