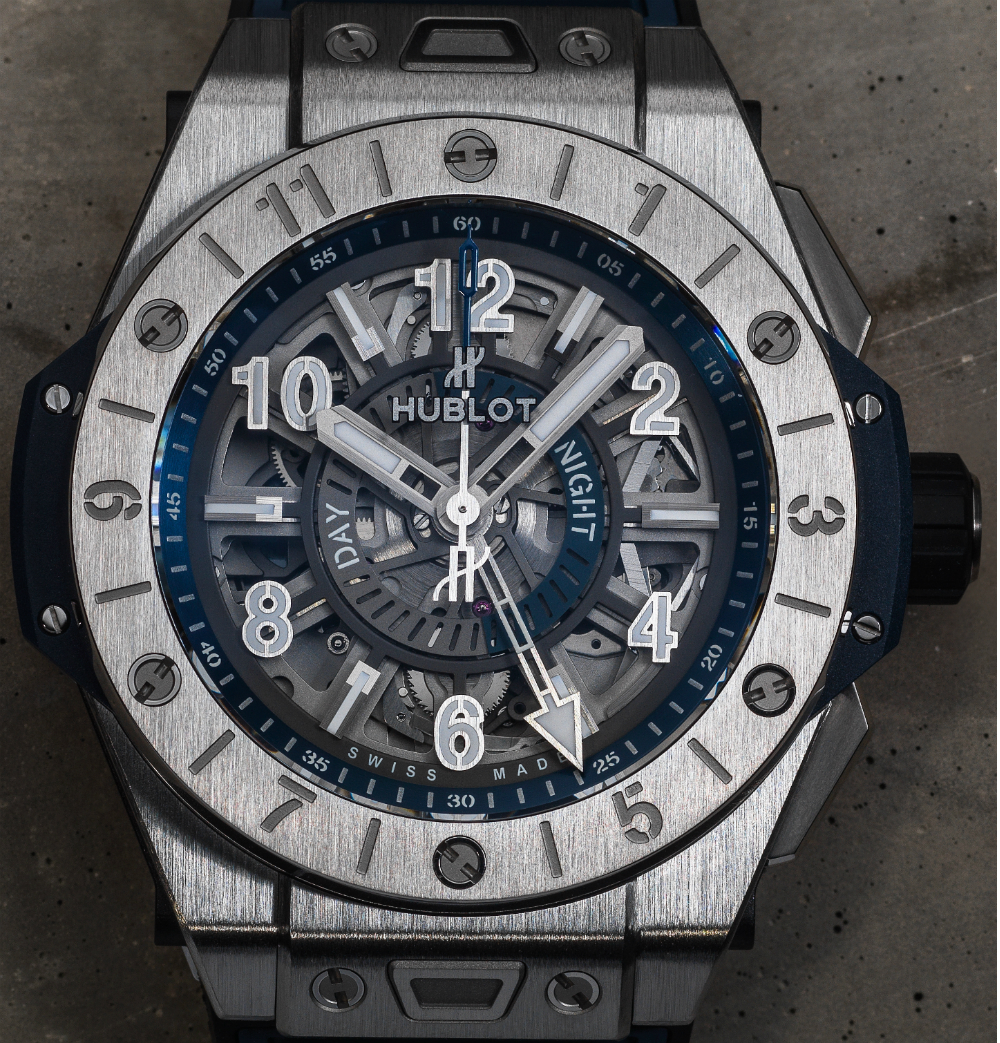 For the first time, Hublot releases a GMT watch in the Big Bang collection with an in-house movement, and I have to say, it is pretty slick. The 2017 Hublot Big Bang UNICO GMT was developed with utility and practicality in mind, and as a logical extension of where Hublot Big Bang watches with in-house movements are going. I’ll get into the technical details in a moment, as Hublot didn’t just include existing GMT functionality into their in-house-made UNICO movement, but refined the concept a bit in order to make switching time zones while traveling more easy and convenient.

I should also note, in order to clear up some understandable confusion, that each time zone in the watch is indicated in 12-hour format – which, in a sense, makes this less of a “true GMT,” and more of a “dual time zone” watch. But let’s not get hung up on definitions. There really isn’t a standard for what is and isn’t a “GMT” (Greenwich Mean Time) watch these days, so you need to look into the details of how each works to fully understand it. 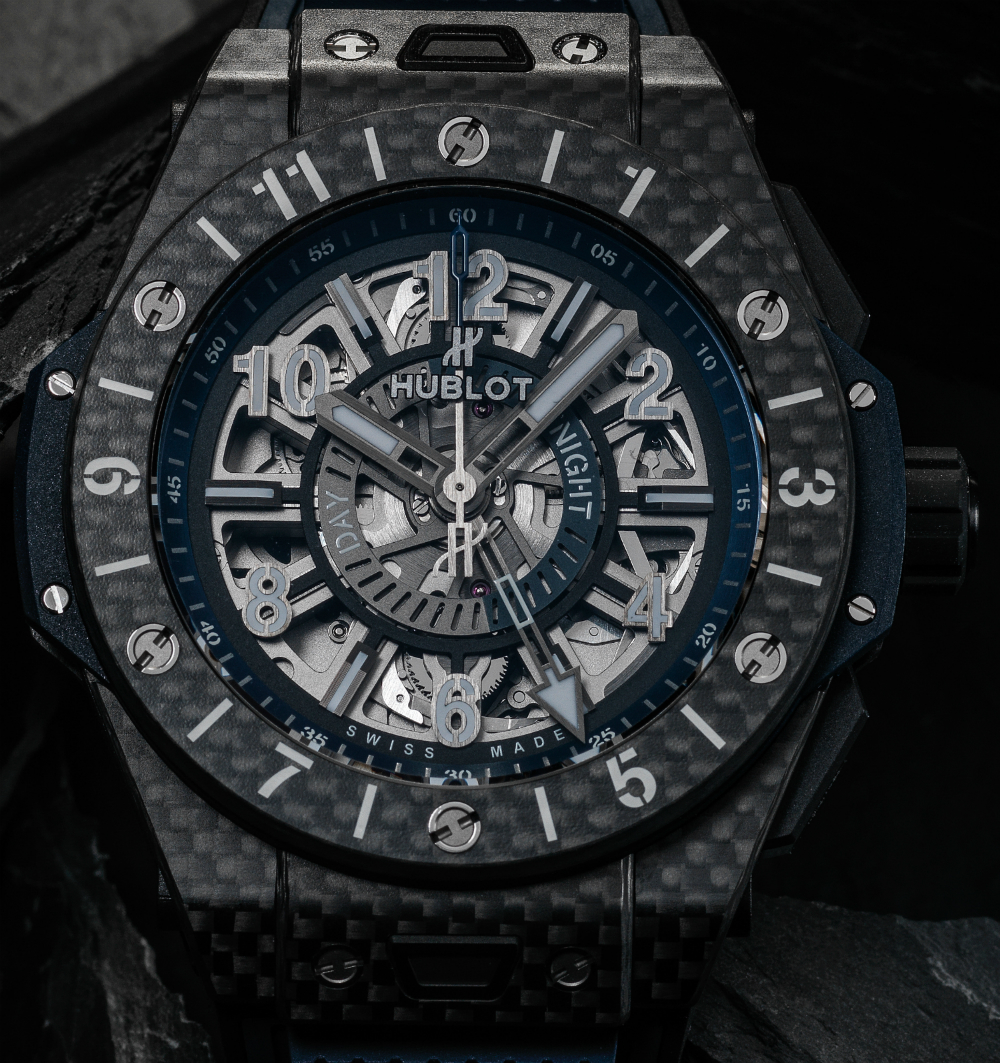 Do you remember the first UNICO GMT watch? It was a much more avant-garde creation from 2011 that was released at a time when weird was still wonderful. The Hublot King Power UNICO GMT used a series of four spinning conical discs on the dial instead of a traditional GMT hand. It was spirited, for sure, but more about an artistic expression of a popular complication as opposed to a truly convenient timepiece for regular travelers. Now, in 2017, we have a new member of the UNICO GMT family with the Hublot UNICO caliber HUB1251 that has a fully integrated dual time zone complication. 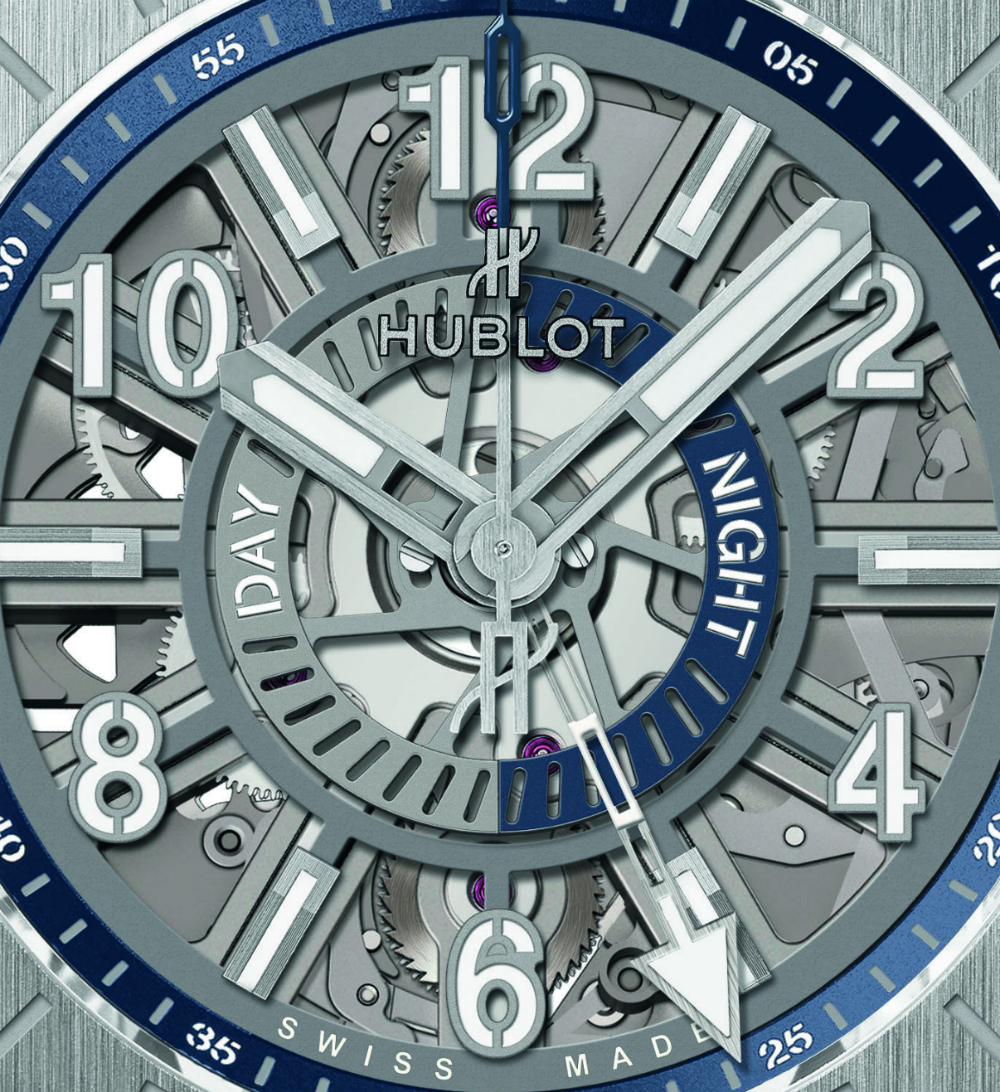 The HUB1251 automatic movement is produced from 339 parts operating at 4Hz (28,800bph) with a three-day power reserve (72 hours). In addition to having two hour hands to indicate local and home time, there is a special day/night disc used to indicate whether it is AM or PM in the second time zone. For me, this is a very important feature because in GMT watches that don’t use a 24-hour time format it can be tricky to know if it is day or night in the “home time zone.” With this disc, the wearer of the Hublot Big Bang UNICO GMT has a very clear ability to know the time in two time zones with a high degree of convenience and legibility. 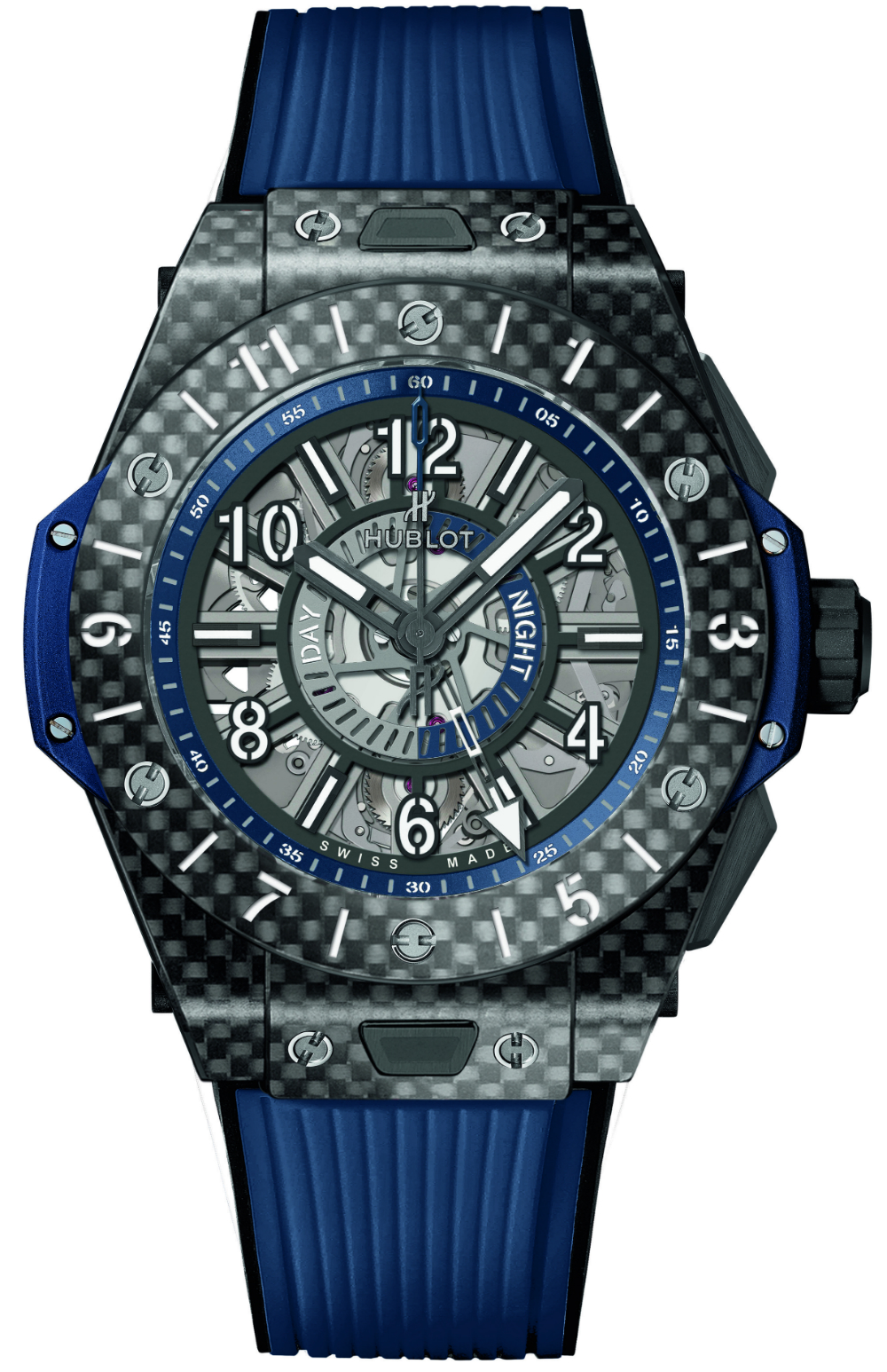 Also part of the HUB1251 movement are distinct pushers on the side of the case in order to advance the local time forward or backward in one-hour increments. According to Hublot, this was an important feature to help make operation of the second time zone complication as user-friendly as possible. It is true that some GMT-style watches require a bit of a learning curve to understand, and the combination of being able to easily to move the time zone “east or west” with the push of a button (a safety mechanism prevents both from being pushed at the same time) is going to be something I feel that a lot of people will appreciate. Even though chronograph-equipped watches are technically more popular, I believe that GMT and second time zone complications are actually used more. 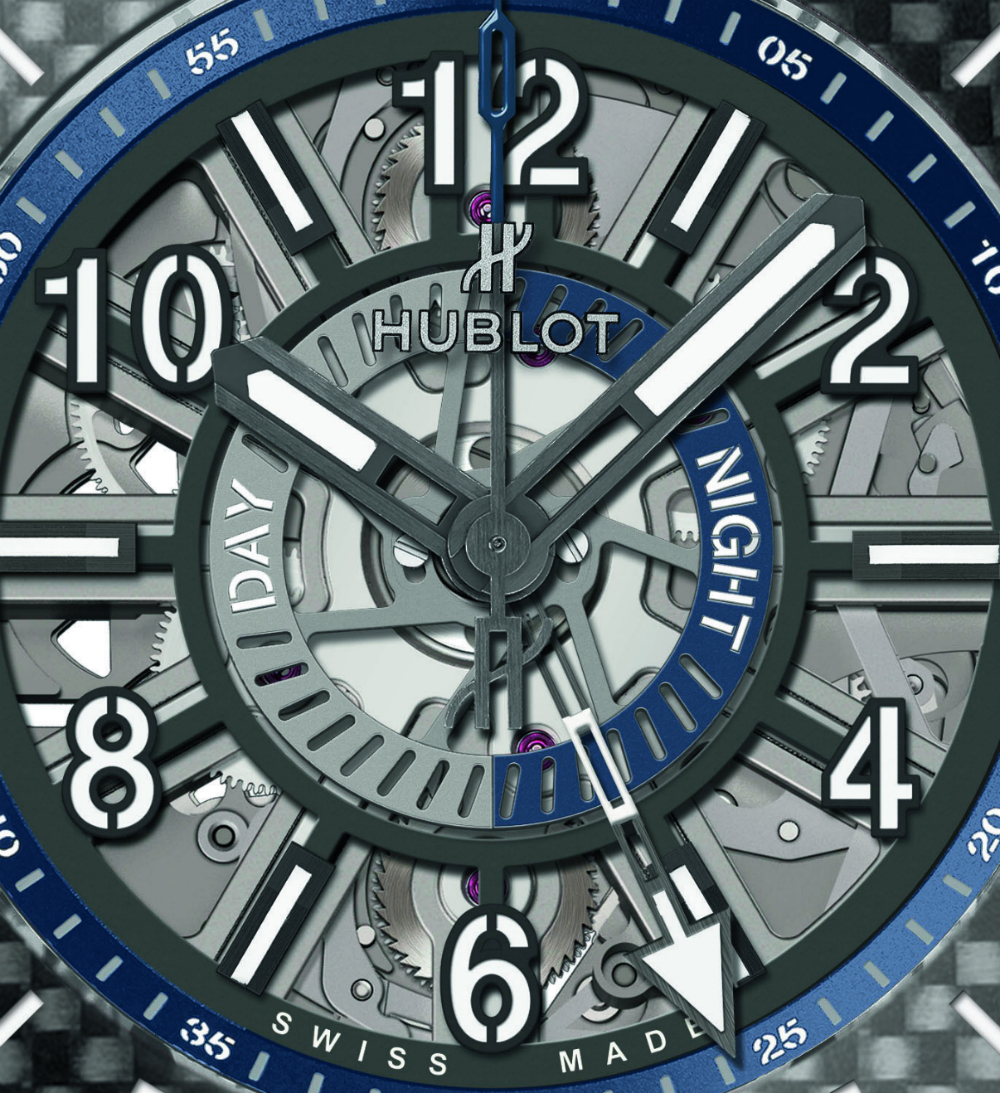 The HUB1251 doesn’t have a date indicator window, and I don’t think anyone will miss it. Not including it in the Hublot Big Bang UNICO GMT makes practical sense, as well, because things get tricky regarding the date as you move forward and backward across time zones. So it is probably a good idea to have left the date complication out versus asking users to adjust an additional feature – doing so would be contrary to Hublot’s vision of making the Hublot Big Bang UNICO GMT as practical and useful as possible. 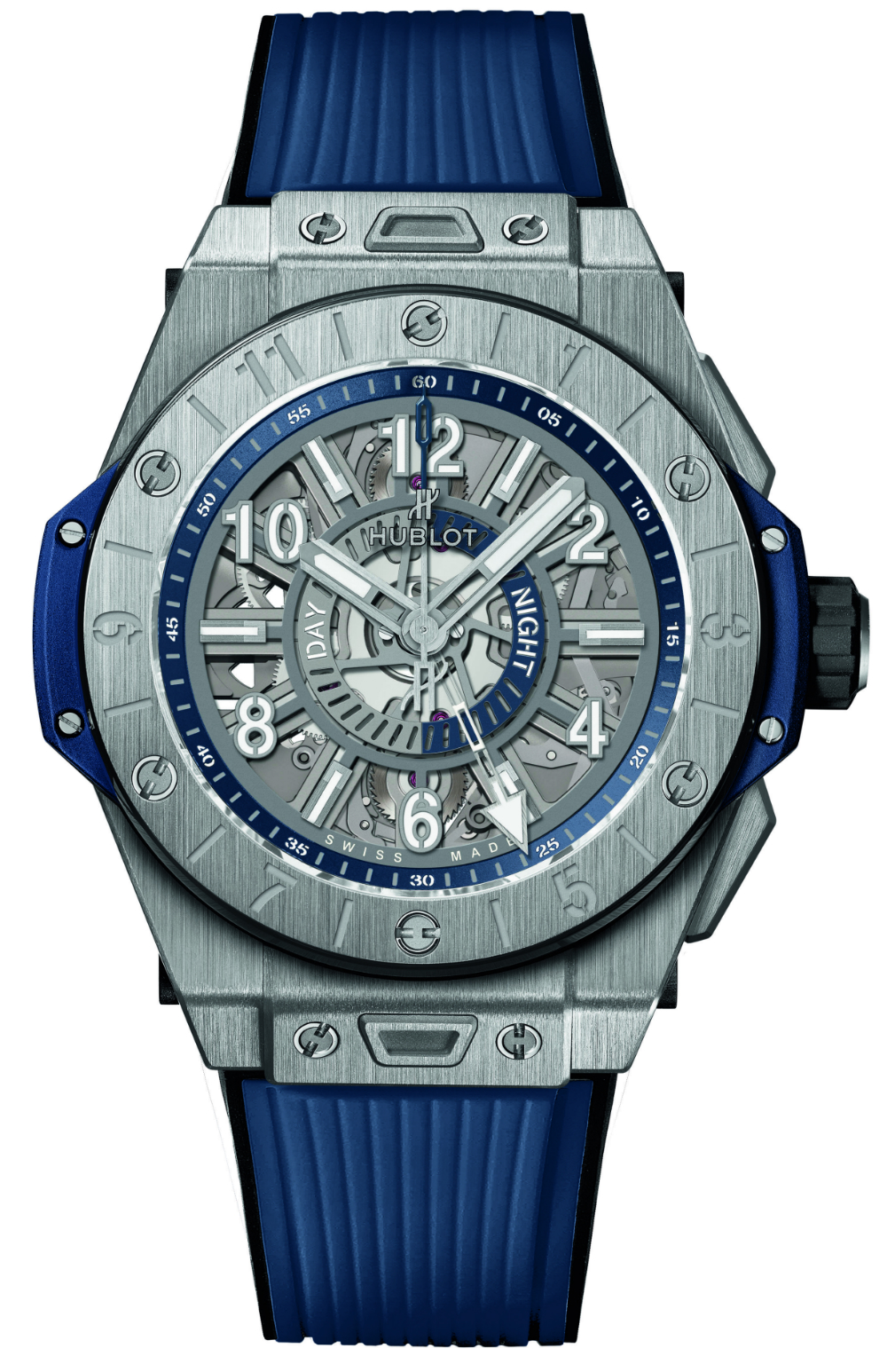 Style-wise, the Hublot Big Bang UNICO GMT is something a bit fresh from Hubot, and the collection debuts with titanium or carbon fiber case options. The markers on the bezel are reminiscent of many traditional 24-hour-style GMT watches, but as you can see, the Hublot designers played around with the concept, simply offering the hour markers in two parts, so Arabic numeral hour markers not represented on the main dial are placed on the bezel, which is an interesting look. Of course, the dial is not typical Hublot Big Bang, but shares most of the Hublot Big Bang 45’s distinctive elements in terms of the hands and hour indicators. The arrow-style second time zone hand is new, but is similar to the seconds hand on the Hublot King Power Oceanographic dive watch – for those really interested in deep Hublot trivia. 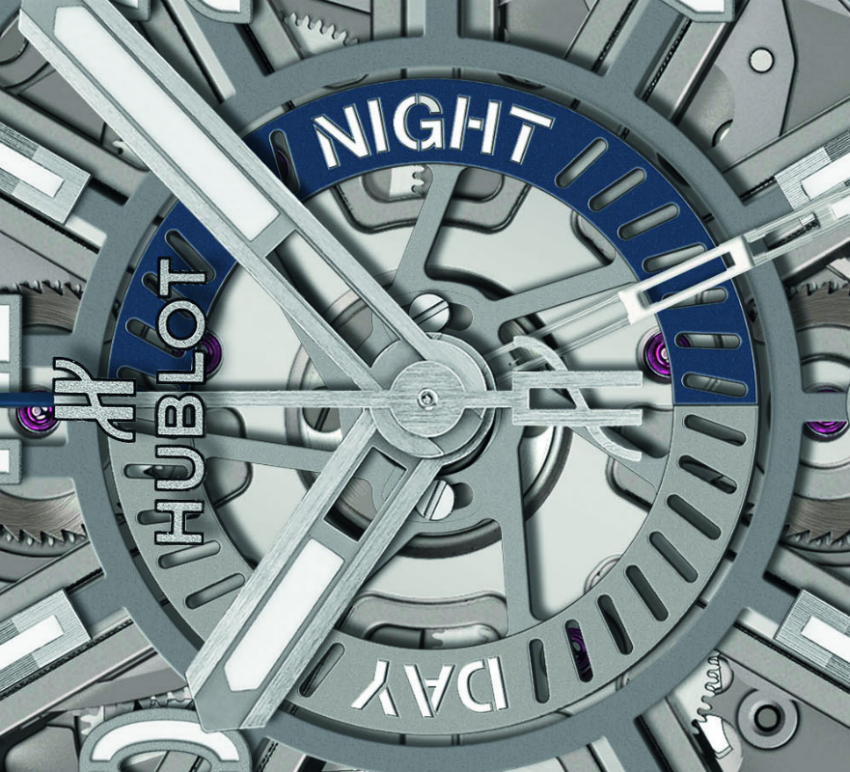 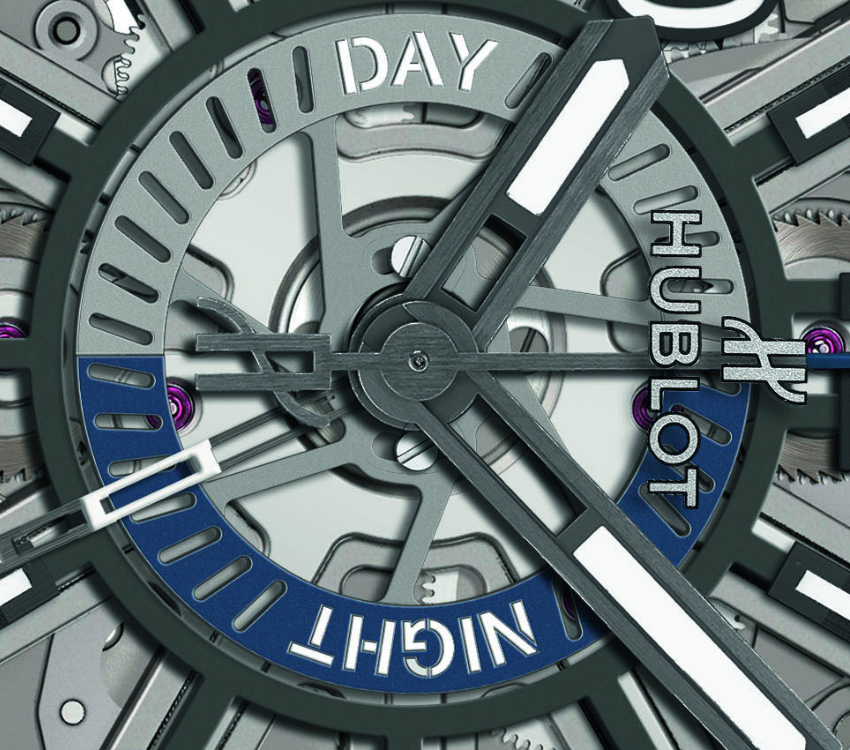 This is an Hublot Big Bang 45 UNICO, aferall, so dial skeletonization with a view into the movement is practically guaranteed. Its accent colors are anthracite gray and deep blue. Once again, we see blue being a strong trend in new watches for the last couple of years. Case size is 45mm wide and 15.85mm thick, with 100 meters of water resistance. As it is a Hublot Big Bang UNCO case, it has the well-regarded “One Click” system for removing and replacing the straps (which are rubber in this series). The Hublot Big Bang UNICO GMT will be initially offered as the reference 471.NX.7112.RX in titanium priced at $19,900 as well as the reference 471.QX.7127.RX in carbon fiber with a price of $23,100. Overall, it is a strong timepiece collection which adds new looks to the Big Bang family, as well as a truly useful take on the GMT/second time zone watch from Hublot. hublot.com