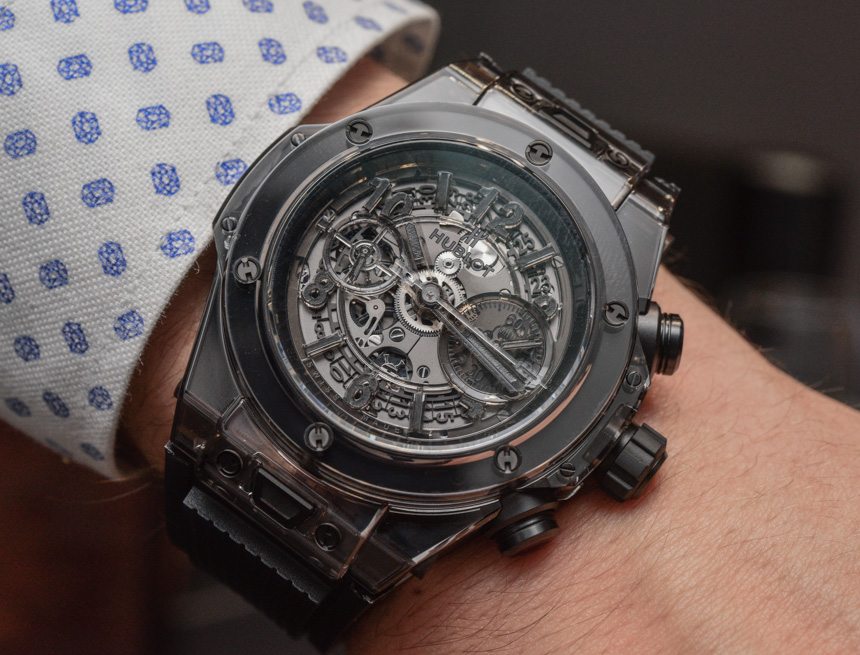 Watches can at times be difficult to explain, but that is a challenge we enjoy taking on daily. Still, we were quite gobsmacked when, at BaselWorld 2016, we first tried to wrap our minds around the idea of Hublot engineers painstakingly making a watch and its case perfectly transparent… and then making said watch all… black again? To celebrate the tenth anniversary of the all-black watch, we saw the release of the competitively priced Hublot Big Bang Unico Sapphire All Black, a darkly transparent watch equipped with the latest technological breakthroughs of the brand. 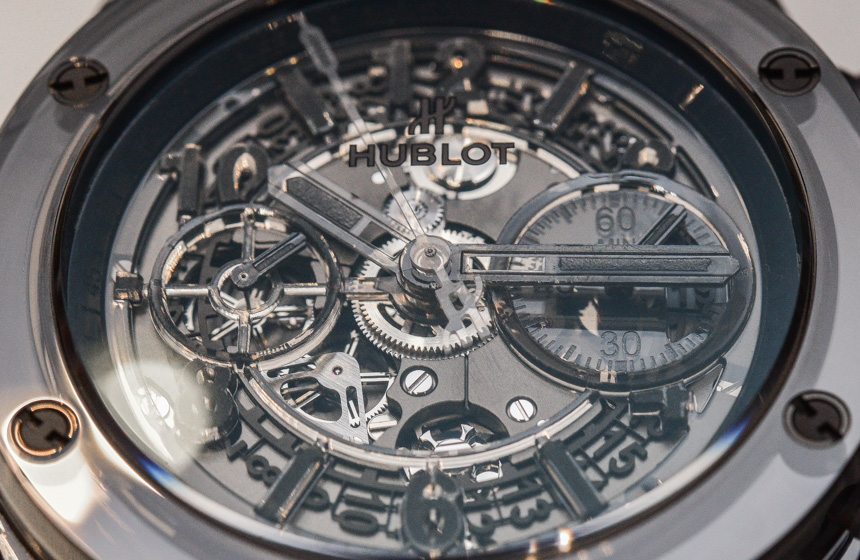 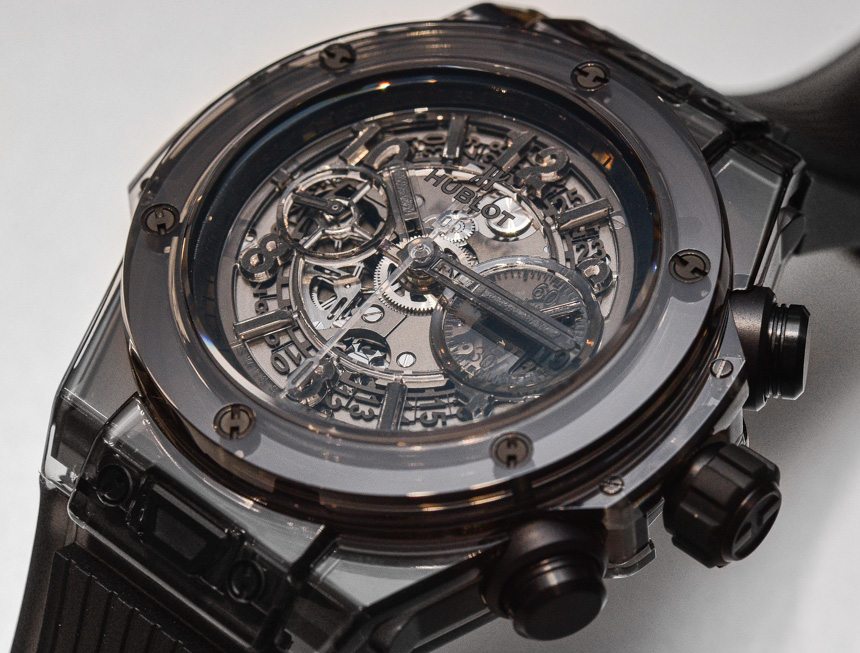 To be clear, it all started back in 2006, when Hublot launched the Big Bang “All Black,” the official progenitor of all-black watches in which the case, dial, hands, and indices were very black and legibility was, ahem, very much tossed out the window. Ten years later, and much to our amazement and amusement, Hublot is still finding ways to push the limits of what could be expected from the otherwise famously tame and relaxed Swiss watch industry. 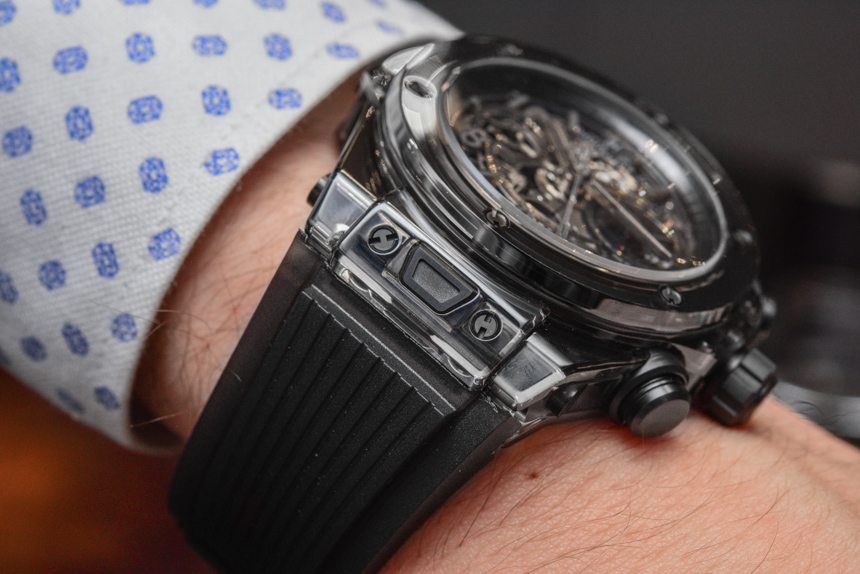 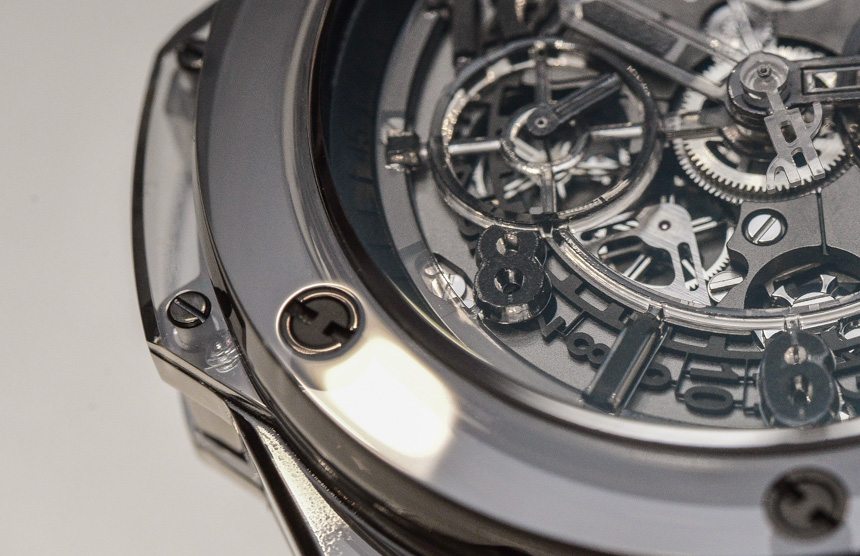 During the presentation of the watch at the thronging Hublot booth at Baselworld 2016, Jean-Claude Biver told us about his idea of invisible visibility and how it revolutionized the concept of time-telling. “People don’t buy a watch to read the time,” pronounced Biver. “When I told my head watchmaker at Hublot that I wanted a black watch that won’t let you read the time” he added with a loud stagey laugh, “the 70-year-old watchmaker almost fainted, arguing that he had been ‘fighting all his life for accuracy and legibility.’” 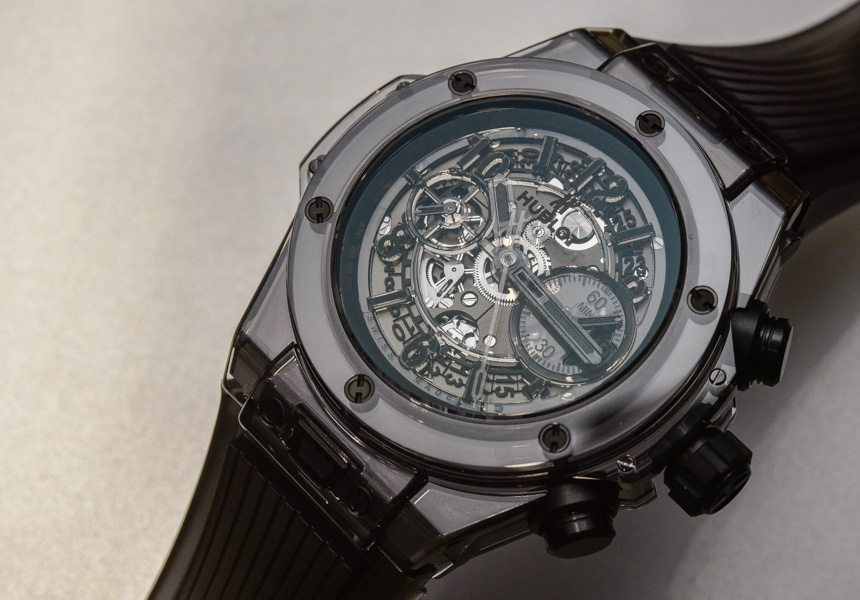 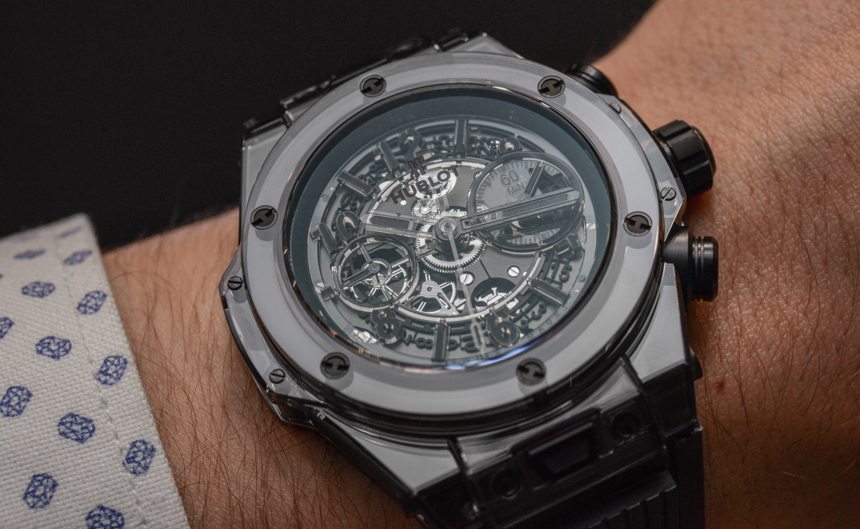 Since 2006, Hublot has taken quantum leaps, and this Big Bang Unico model fuses the two main pilasters of the brand by combining the muscular physiognomy of the Big Bang with Hublot’s manufacture Unico caliber – with sapphire cases. Sapphire is a material that has seduced watch brands with a certain avant-garde profile, with Cecil Purnell (yes, them) being the first to launch a watch all wrapped in sapphire, with a limited run of 5 pieces of their Mirage model. Richard Mille followed up quite a few years later and made a much bigger splash with their $1.65 million RM 056 sapphire-cased watch. 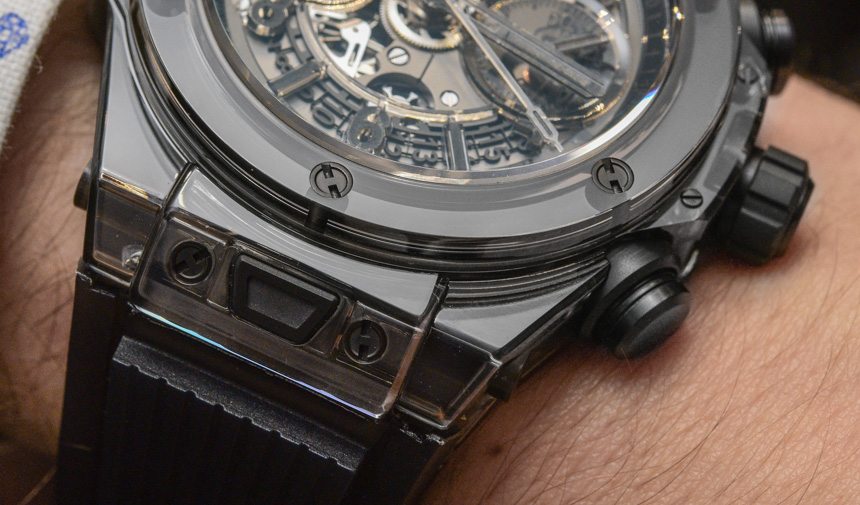 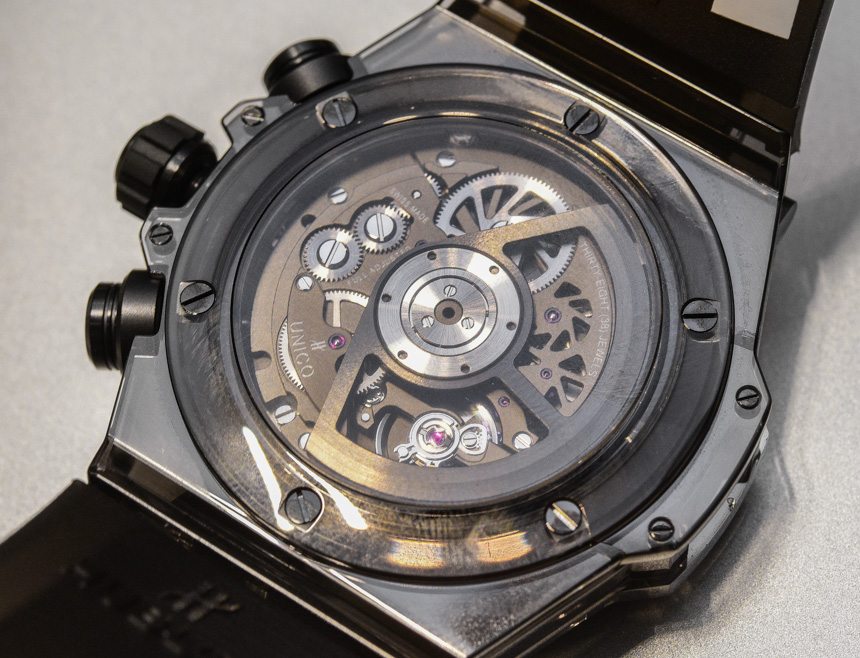 Hublot stands out as innovative and aesthetically different, producing 500 sapphire cases. That adds a dash of “industrial prestige” since it is extremely difficult to manufacture and can only be cut by diamond. According to Biver, Hublot has “industrialized sapphire” and invested vast quantities of money to create the specialized tools behind the production of the 500 Hublot Big Bang Unico Sapphire All Black watches.

It’s like this: imagine BMW developed the latest M3. It’s awesome, full of novel technologies, and it’s spectacular as ever. Then, a year later, BMW fits square wheels to it. It still has all the fantastic technologies inside and it costs the same, but it decidedly doesn’t function as originally intended. 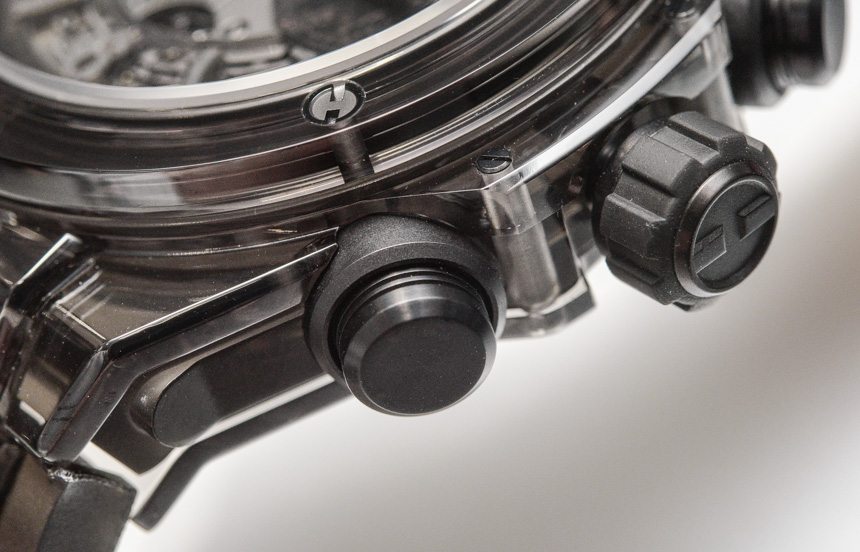 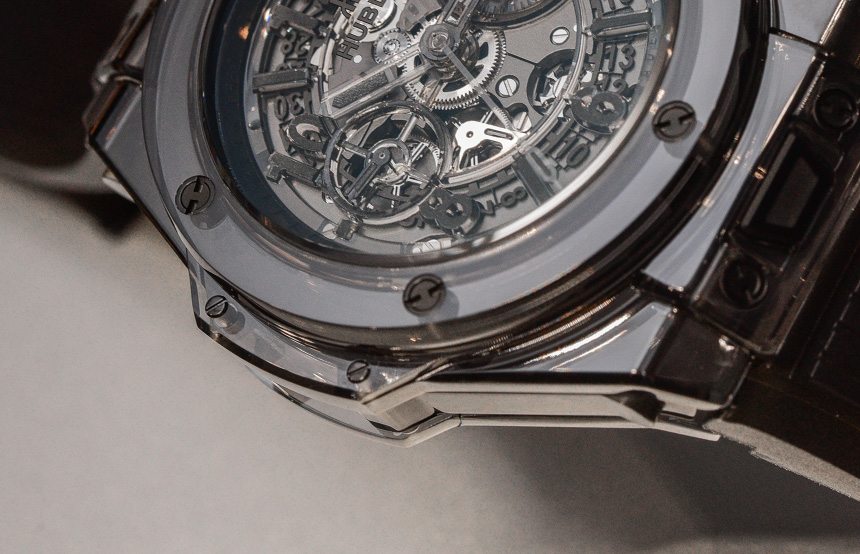 Hublot already had two watches housed in sapphire cases in its portfolio. We first saw the MP-05 LaFerrari Sapphire and the Big Bang Unico Sapphire watches earlier this year. Conceived as an anniversary watch, the Hublot Big Bang Unico Sapphire All Black is identical in construction to the clear Unico Sapphire, but in this instance, its 45mm case is built form smokey-black-coloured sapphire blocks. Inside the case, the original silver movement has changed to black, and transparent details on the dial have also been darkened. 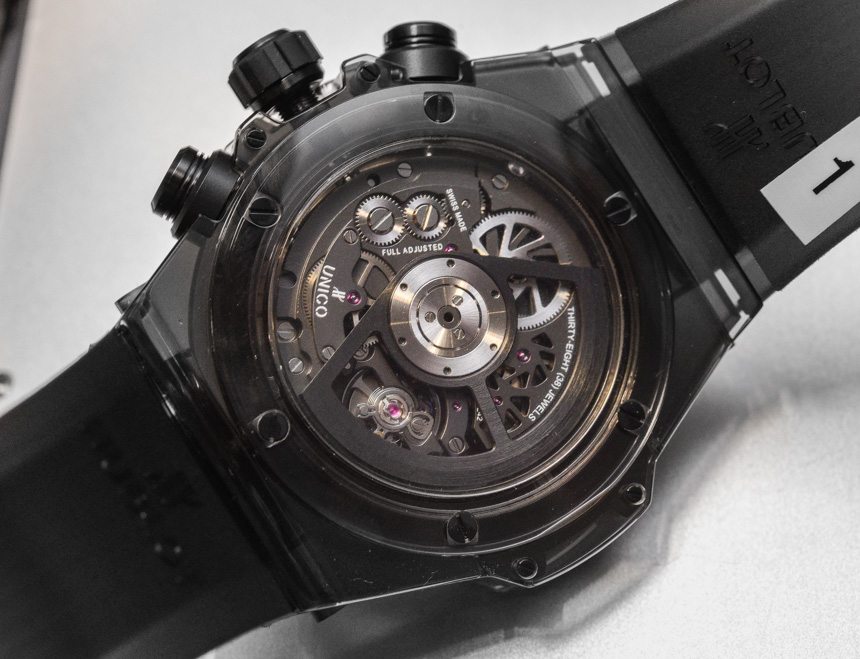 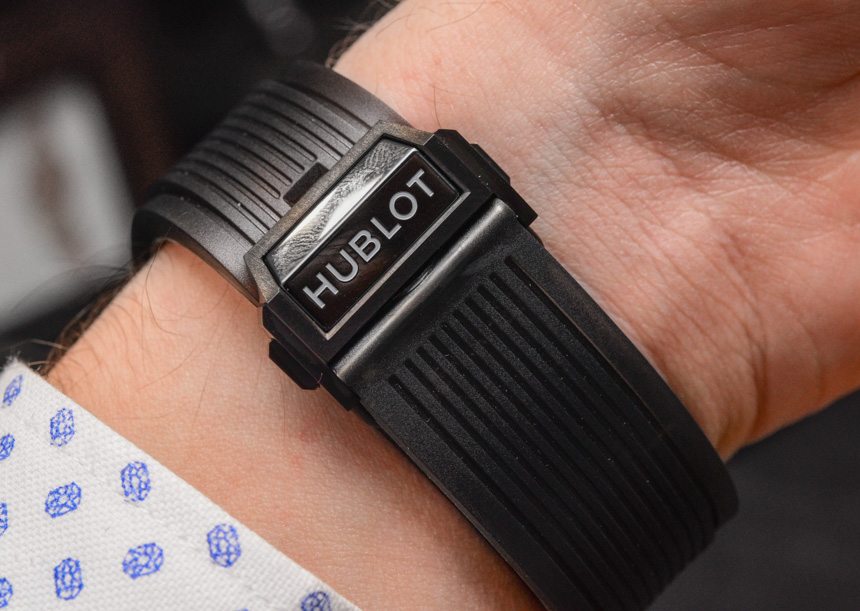 To increase the sensation of transparency, and in spite of the black PVD covering, Hublot has skeletonized the HUB 1242 Unico caliber, an automatic chronograph movement that beats at 4Hz and has a 72-hour power reserve. The caliber HUB 1242 looks great inside this Hublot Big Bang Unico Sapphire All Black watch and substitutes the refined finishes of high-end watchmaking for a more industrial and solid presence that certainly packs a punch. Conceived to surpass the Valjoux 7750, Hublot’s in-house chronograph comes with a flyback function and a column wheel, visible from the dial of the watch.

Like other models with sapphire cases, the watch comes on a transparent rubber strap. In keeping with the dark spirit of the watch, the rubber is also a smokey black to match the case. I personally am not a big fan, as it looks a bit murky to me rather than dark and brooding. Luckily the straps come with the patented exchange system and are a cinch to change. 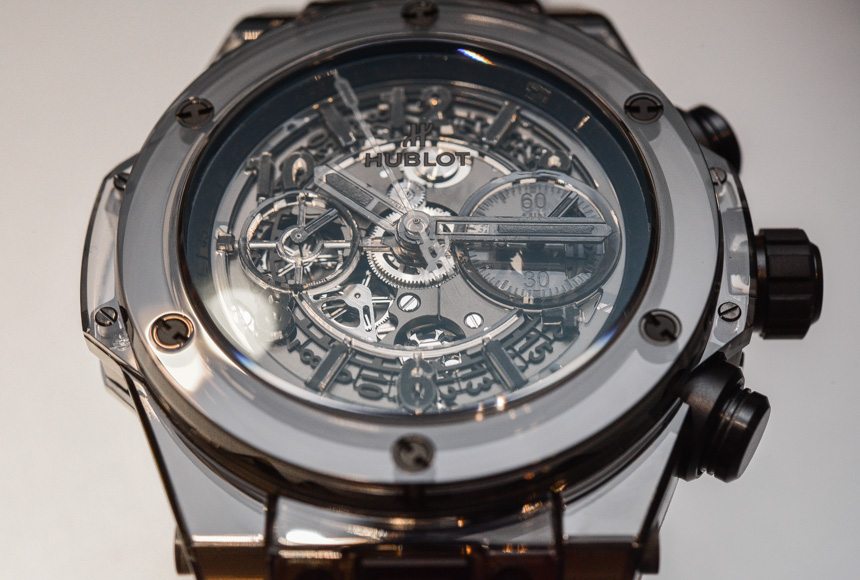 The black soul of this watch is echoed on the dark dial of the Hublot Big Bang Unico Sapphire All Black. The hour and minute hands and the chronograph hand are all crafted in smoky black sapphire and get totally lost in the dark sea of components unless hit by direct light. Reading the time on this watch takes time. The date? Let’s put it this way: it takes faith, and you just have to believe that it is out there somewhere. What’s more, the date disc is skeletonized producing a contrary effect to that desired. Instead of letting the light through and emphasizing the sensation of depth, the only thing it creates is a sensation of jumbled data and blurry hour indices. 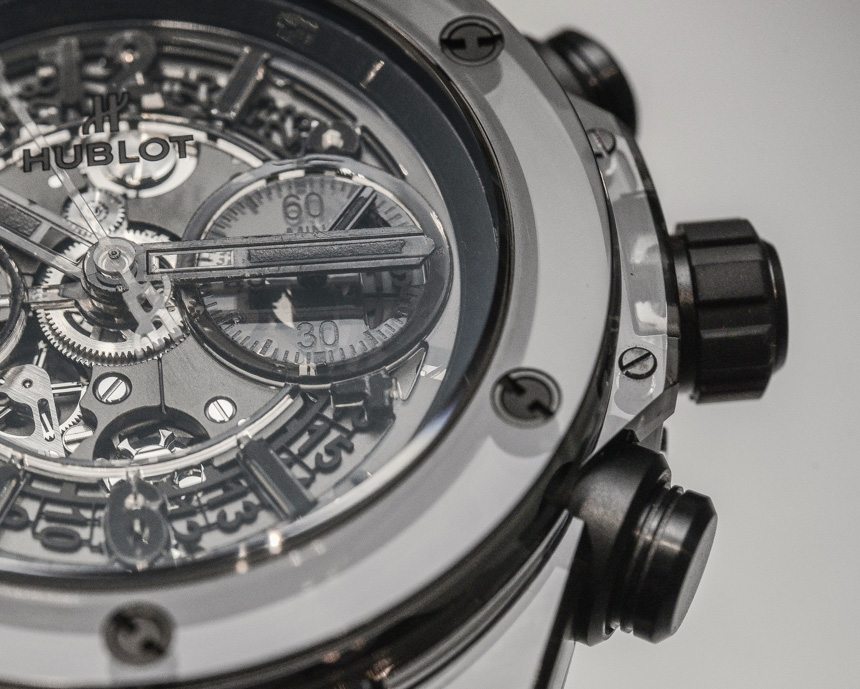 Reading the two subdials will also make you frown with concentration. The small seconds at 9 and the 60-minute counter at 3 o’clock get lost in the dark depths. This is not exactly the kind of chronograph you would want to use as a countdown timer for the 14 seconds of impulse necessary to get the lunar module back to Earth. Telling the time isn’t easy, which might bug some people, but it has nothing to do with Hublot’s overall mission with this anniversary model. As Ricardo Guadalupe, Hublot CEO, stated: “In the original All Black concept, the watch is visible but the time display is invisible.” Check. 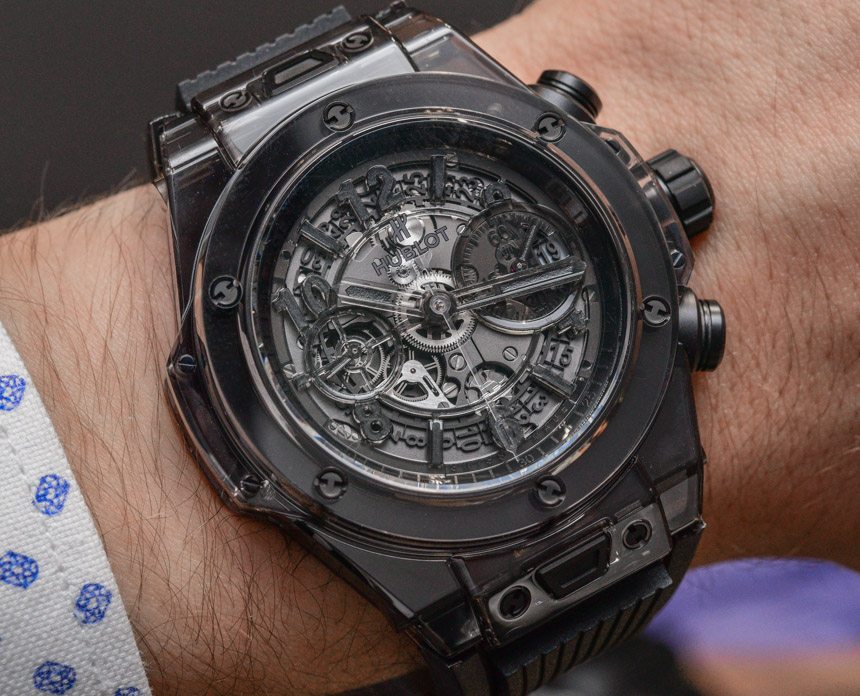 This watch comes full circle with Hublot’s love of all things black and all things sapphire. It’s nearly impossible to read and defies the benefits of its material choice – and will still likely have its fans and buyers in spite of those facts. This dark anniversary watch is presented in a limited edition of 500 pieces with a price of $57,900. hublot.com