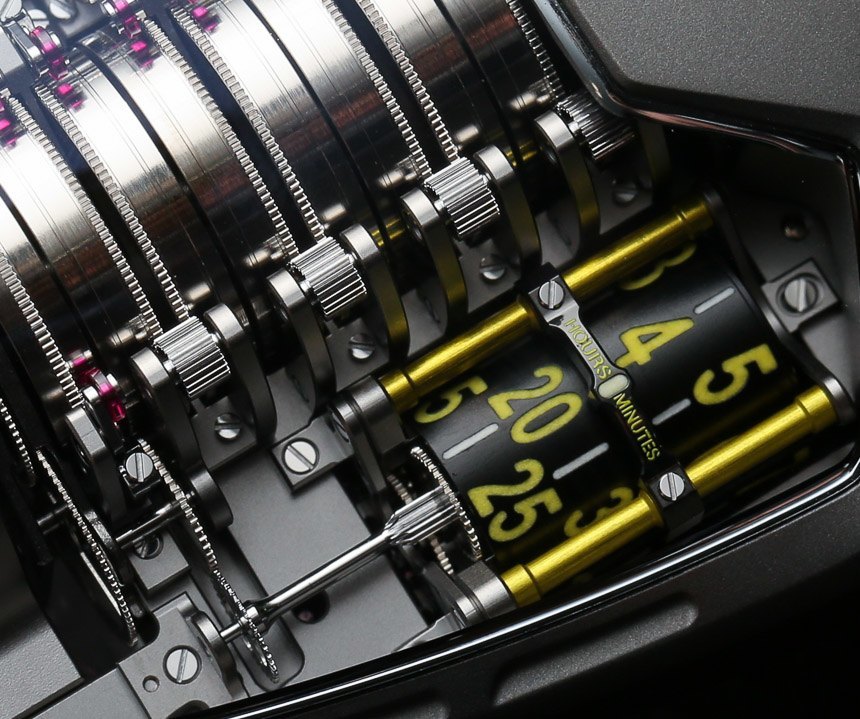 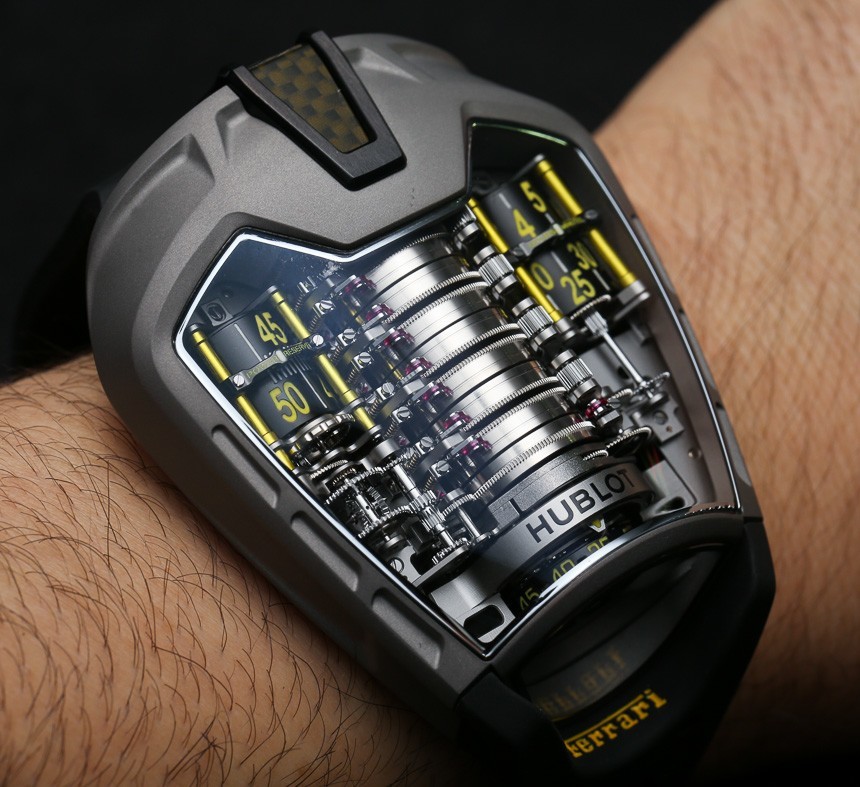 It should not come as a major surprise that a year after the successful debut of the original limited edition Hublot MP-05 LaFerrari watch, Hublot returns with two more versions. When I last checked (early July of 2014), the aBlogtoWatch video of the original Hublot LaFerrari watch had over 450,000 views on our YouTube channel. Say that you will about Hublot timepieces, but the brand “still has it” when it comes to creating ultra-high-end timepieces that demand attention.

In order to full understand the story of the MP-05 LaFerrari watch, I recommend you begin with our 2013 article debuting and discussing the original model. There, I talk about the competition that Hublot is trying to beat with the watch, and what it meant for the brand to release such a timepiece. Nevertheless, I should recap some of the major talking points of the piece (as there are many), and discuss what is new about this 2014 version of the Hublot MP-05 LaFerrari watch.

Now, if you are a watch lover and the mechanics and design of the Hublot MP-05 LaFerrari watch are more interesting than Hublot’s business relationship with Ferrari, then what you’ll want to know is that the Hublot MP-05 LaFerrari watch has the longest power reserve of any mechanical watch on the planet. See that stack of barrels in the center of the movement? Between 11 mainspring barrels, the in-house made and designed Hublot caliber HUB9005.H1.6 movement has 50 days of power reserve. That is about 1,200 hours. Just for comparison purposes, a standard mechanical movement has about 42 hours of power reserve. 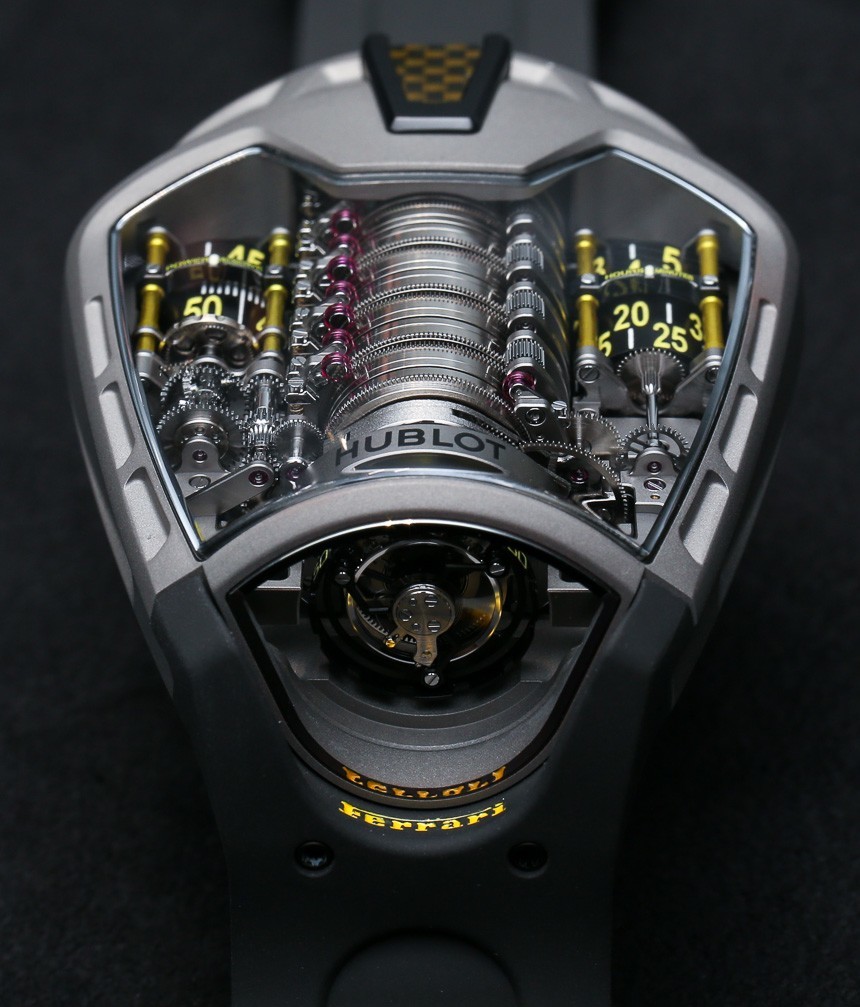 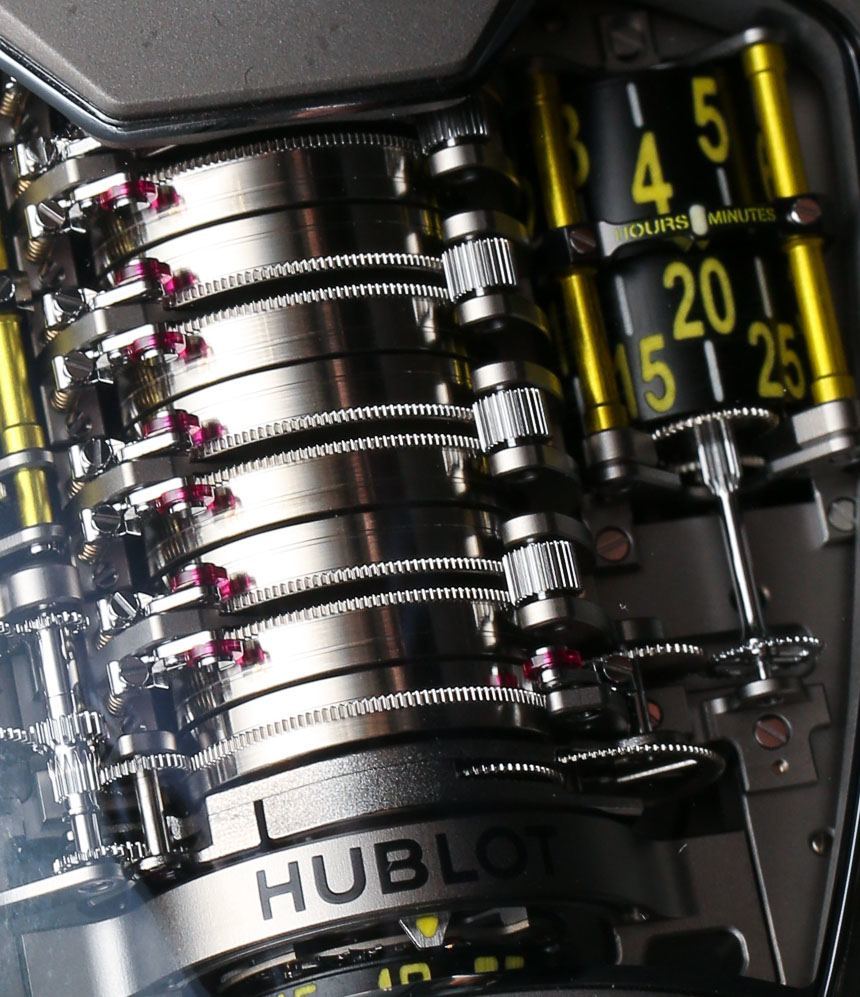 Hublot designed the movement inside of the Hublot MP-05 LaFerrari watch – which is part of the brands “Masterpiece” collection (thus “MP”) – to roughly resemble the engine bay of the actual LaFerrari car – a limited edition Ferrari that looks pretty spectacular (and is more than likely totally sold out). The movement is quite literally mostly mainspring, and the many barrels that populate the center are key to its performance. At the lower end of the stack is a tourbillon-style escapement which is vertically positioned and visible through a window at the bottom part of the case.

From a technical standpoint, the major challenge of having a 50 day power reserve is the torque curve. Think of a single wound spring. When it is fully wound, the power it releases is more than than the power it releases as it winds down. So as a spring slowly releases power, the actual power it releases varies. This is an issue because differences in released power (measured in torque, more or less) effect how accurate the timing is. Watches are regulated to account for a specific amount of power to be released, and when that power shifts, so does the accuracy of the watch in regard to indicating the time. So Hublot’s challenge was to design a system where not only do the mainsprings slowly release power over a 50 day period, but that power remain relatively constant, so that reading the time is at all reliable. 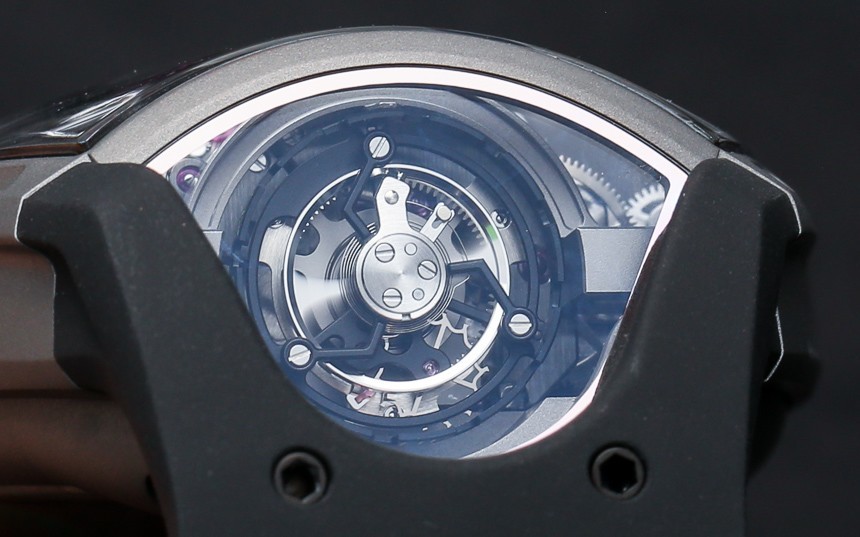 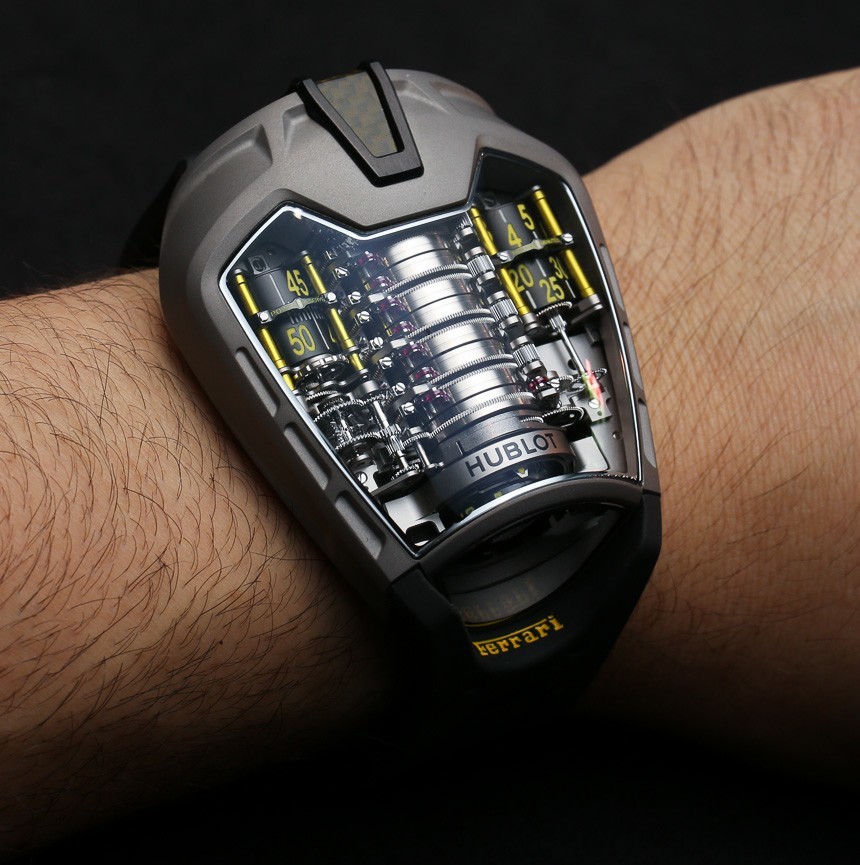 One way to improve isochronism is by stacking the barrels in a way that they are “coupled.” The 11 mainspring barrels in the Hublot MP-05 LaFerrari are “series-coupled,” designed to ensure a greater degree of consistency in the power as it is released overtime. Adding a tourbillon to this arrangement isn’t about increasing accuracy, but more about luxury and adding mechanical art and complexity to an already complex movement. Viewing the movement in action is quite amazing, and examining the details of the 637 piece movement is extremely satisfying.

What does the watch indicate? Actually just the time with seconds (via the tourbillon) and a power reserve indicator. To the left of the barrels are two turning drums that indicate the power reserve with what appears to be a drum for the days at the top, and one for the hours below. On the adjacent side of the dial are two drums for the time represented by a drum for the hours above and right below it one for the minutes. A thinner drum for the seconds is located near the tourbillon as part of its spinning cage. 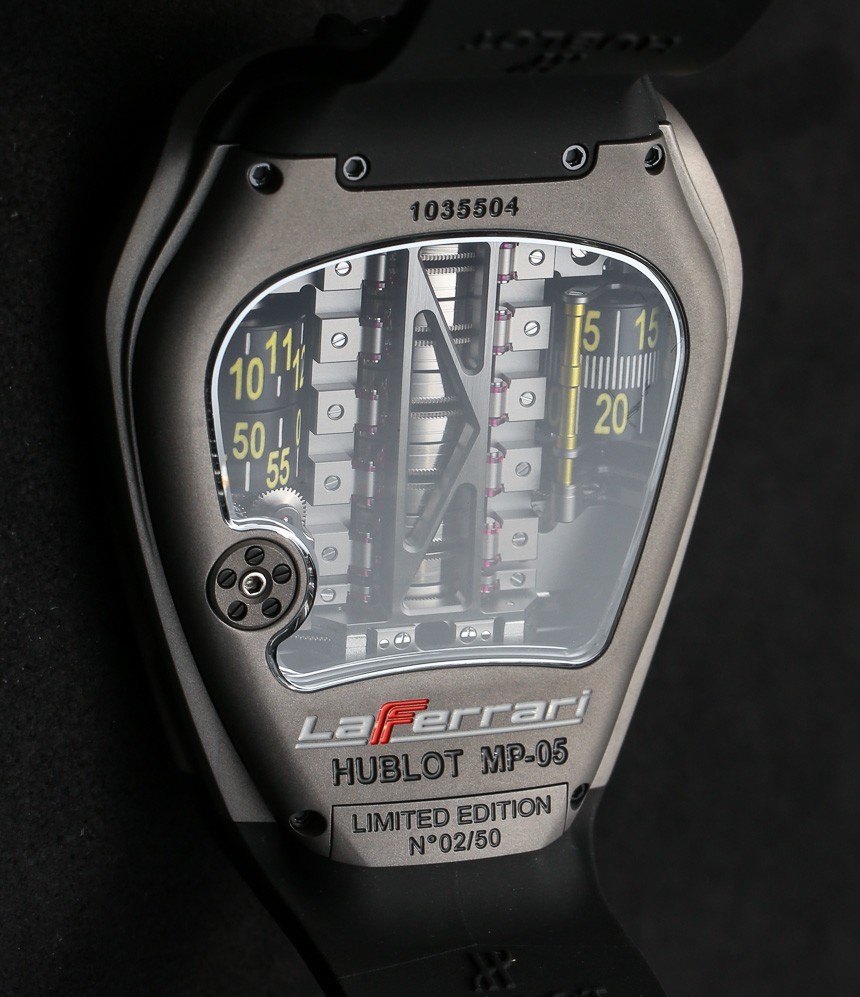 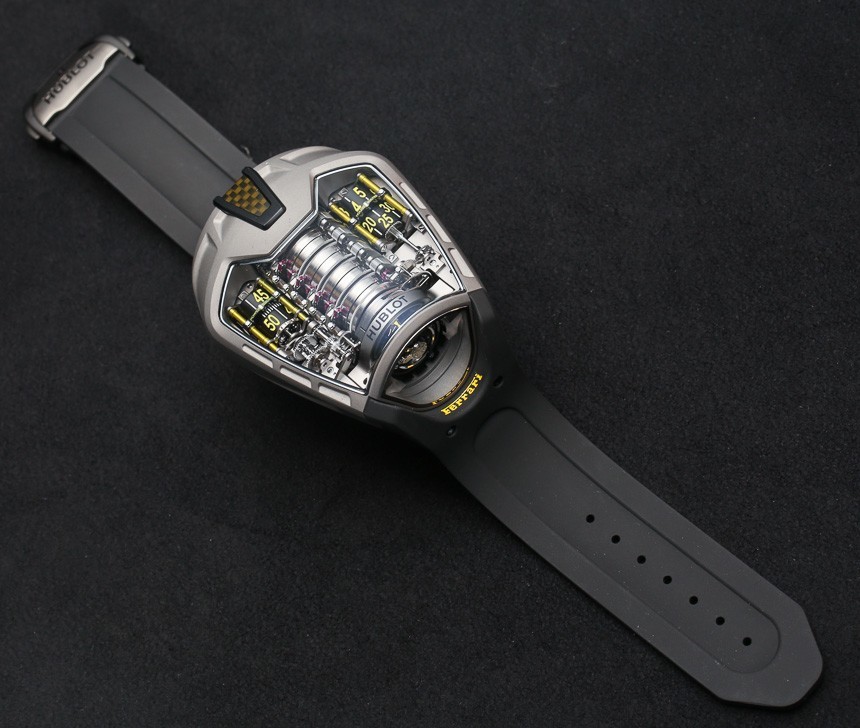 Operating the Hublot MP-05 LaFerrari is another unique endeavor. The case has no crown or adjustors of any kind. In fact, to wind the watch or set the time you need a secondary device. We have a picture of it in our original LaFerrari watch article (linked to above) from last year. It is an electric drill style tool that Hublot supplies with the watch. It is connected to the port on the top of the case for either setting the time or winding the movement. Why an electric drill? Well, because it would otherwise simply take too long to wind it by hand!

The Hublot MP-05 LaFerrari case it yet another distinguishing element and, once again, produced in titanium for this limited edition model. Unlike the deeper black color of the original, the titanium on this version is matte bead blasted and done in a lighter gray color that looks more like natural titanium. I certainly melds well with the yellow (versus red) accents of this version. In addition to the titanium and yellow Hublot MP-05 LaFerrari for 2014, Hublot is also offering an 18k rose gold version that takes the look of the timepiece… to a different territory altogether.  From a design perspective, the entire case is, once again, meant to allude to the engine bay of a Ferrari car. 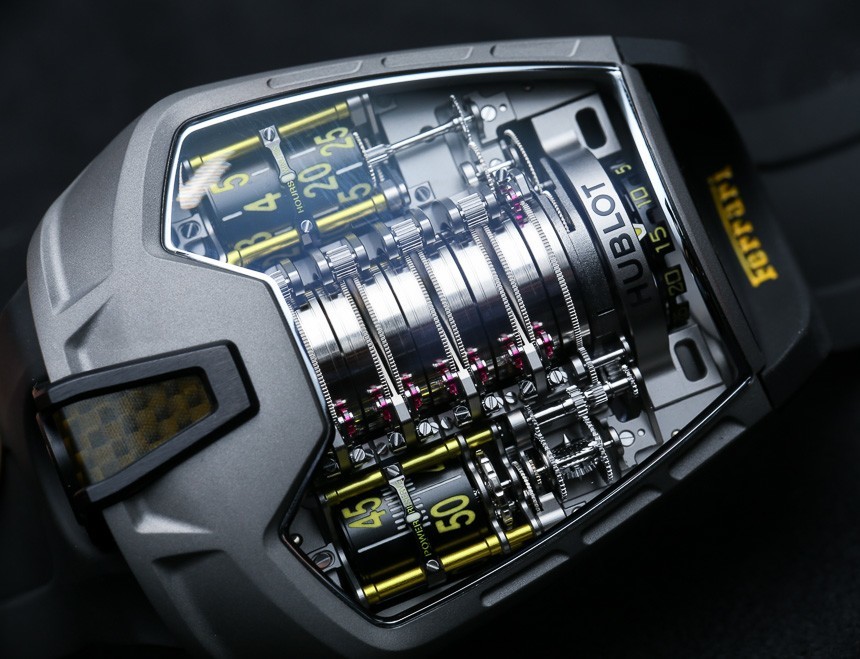 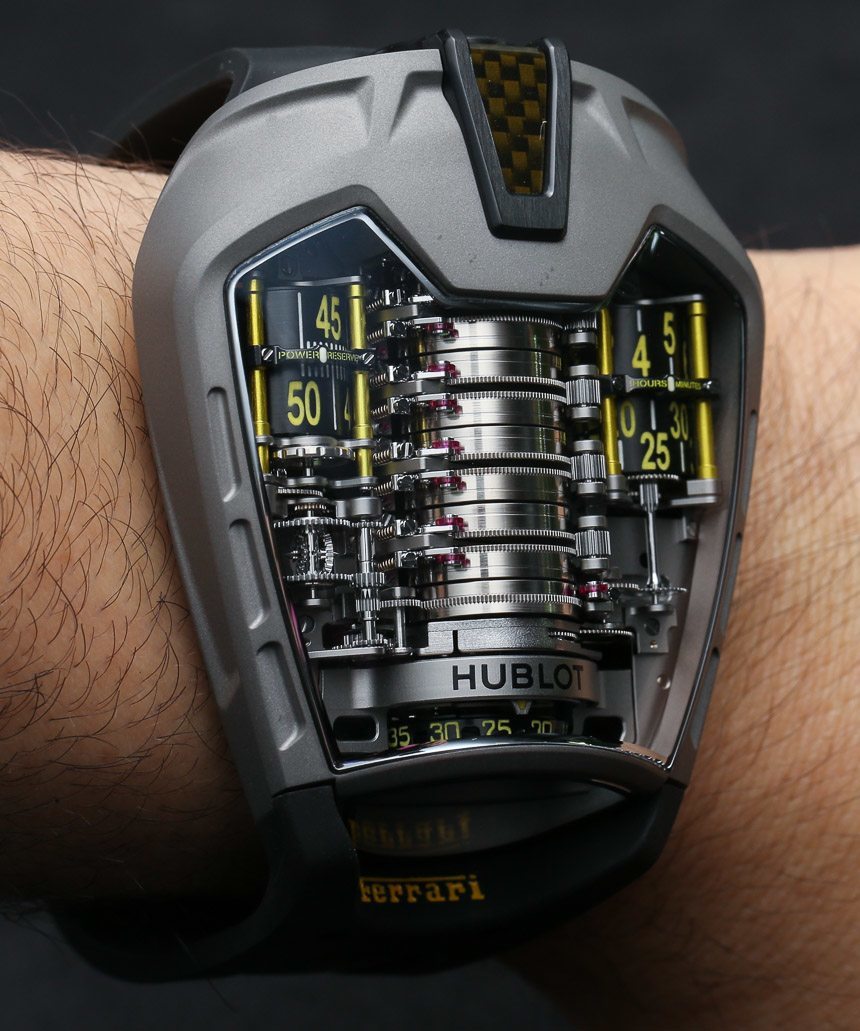 The Hublot MP-05 LaFerrari watch remains one of the coolest ultra-luxury-watches on the planet and represents the apex of what Hublot is able to achieve. Of course, timepieces such as this exist as halo products with very few being sold and being of negligible value to a brand’s overall bottom line despite their high price. Nevertheless, it is a good day at Hublot when any $300,000 plus timepiece is sold – but imagine the production and design costs of a watch like this.

On the wrist, the Hublot MP-05 LaFerrari sits more snugly than one might imagine with the rubber strap, but of course the oddly-shaped case with its generous dimensions sits differently than most watches. The case is 45.8mm tall by 39.5mm wide and 15.3mm thick. It does seem to be bigger than it is actually is, but what else would you expect with a timepiece specifically intended to be larger than life. The 2014 titanium and yellow version of the Hublot MP-05 LaFerrari watch is limited to 50 pieces with a price of $345,000. hublot.com