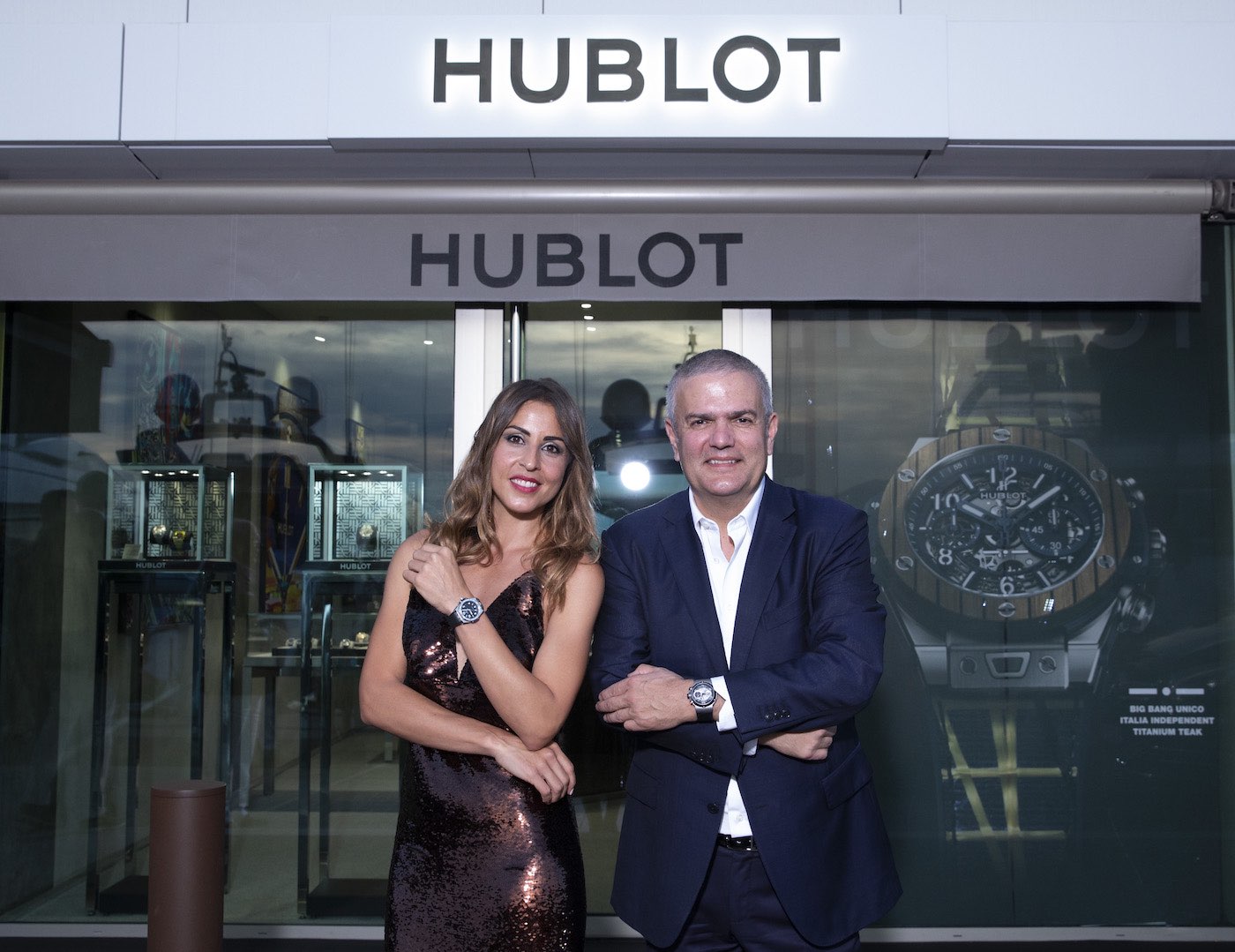 In a whirlwind month for sun-kissed islands around Europe, Hublot managed to release three new pieces celebrating the brand’s presence on Capri, Ibiza, and Mykonos. While every piece is quite different in composition, there is a distinct summery theme running through the three new models (all of which are strictly limited). Sky blues, whites, and a decidedly breezy character have been applied to this new trio of special editions, with a couple of charming elements that mark this run as essential wrist candy for island-hopping holidaymakers. 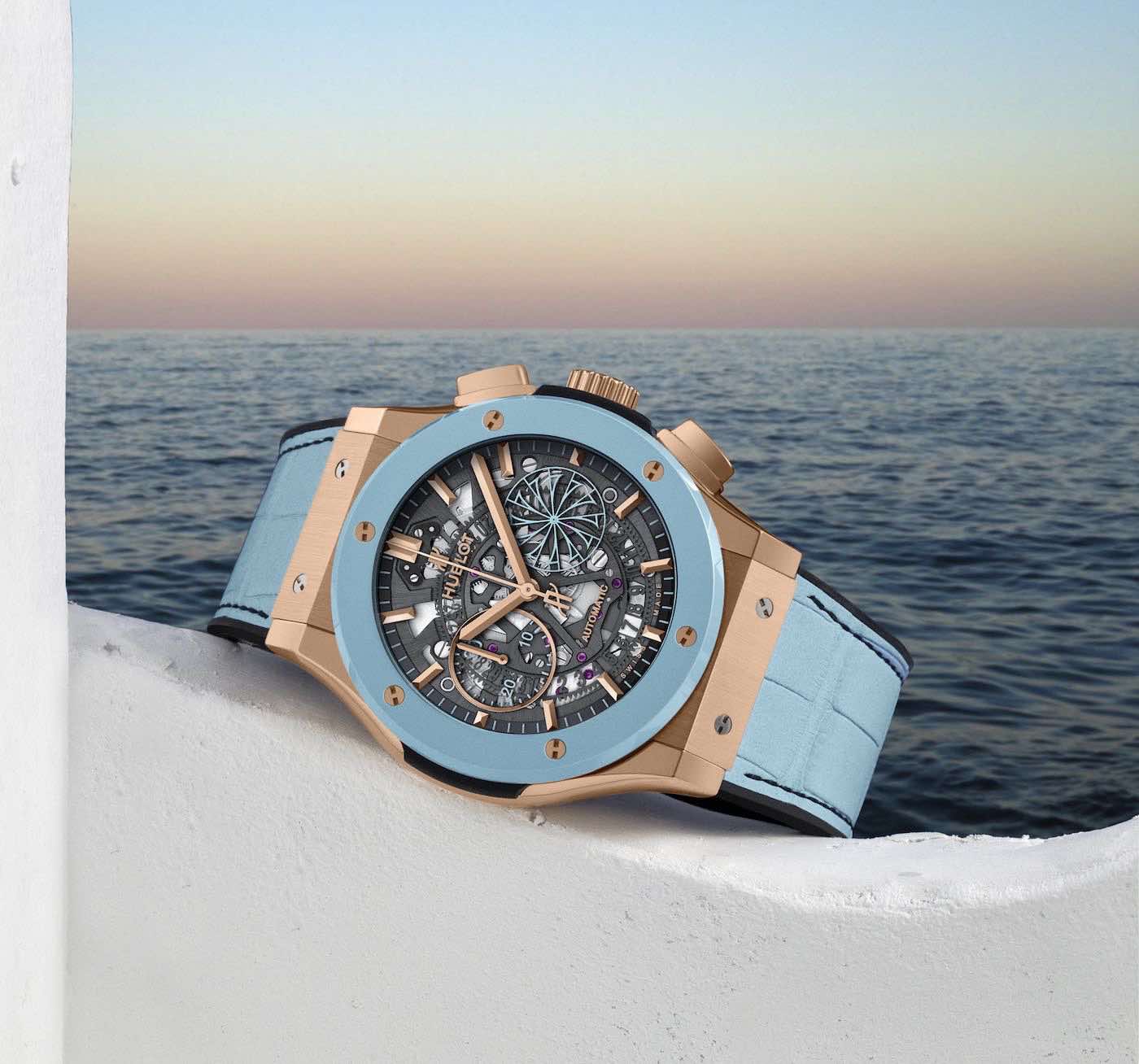 Hublot knows its market. It isn’t the first time the LVMH powerhouse has dropped a release specific to a Mediterranean island. There is not a huge amount for brand lovers to get excited about, aside from the unusual photo-realistic caseback decoration of the Capri model, the icy-blue ceramic elements on the Capri and the Mykonos models, and the reuse of the “windmill” seconds disc on the Mykonos models. The Ibiza piece — the white and dark blue effort with the gimmicky “Hublot Loves Ibiza” caseback printing — offers the least in terms of worthwhile novelty, but its more straightforward colorway and decidedly nautical feel may see it doing rather well with moneyed yacht owners. 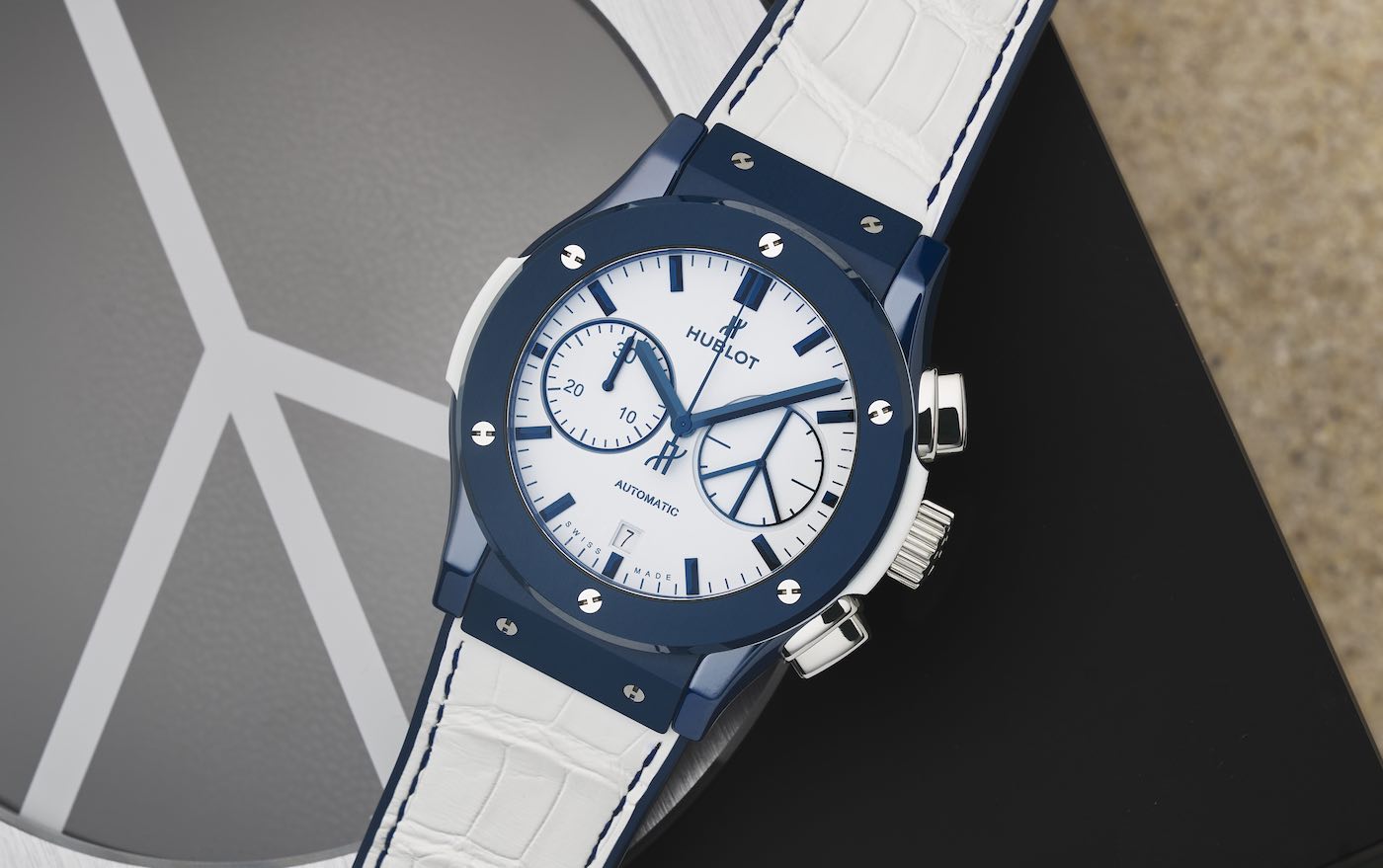 And so, to the nitty-gritty of the models themselves: The Hublot Classic Fusion Chronograph Capri (reference 521.EX.8920.RW.CAP19) is perhaps the most feminine of the bunch. Hublot makes no attempt to describe the shade of blue as anything other than simply “sky blue” here, which is a rare missed opportunity for a high-end watchmaker to talk at length about the specialness of their version of blue. While I commend Hublot for not stumbling headlong into one of my greatest pet peeves, on this occasion the blue is so uncommon a shade, perhaps it should be given a ridiculously emotive name so we stop and talk about it and whether or not it is a color that sits comfortably on a watch with a five-figure price tag. 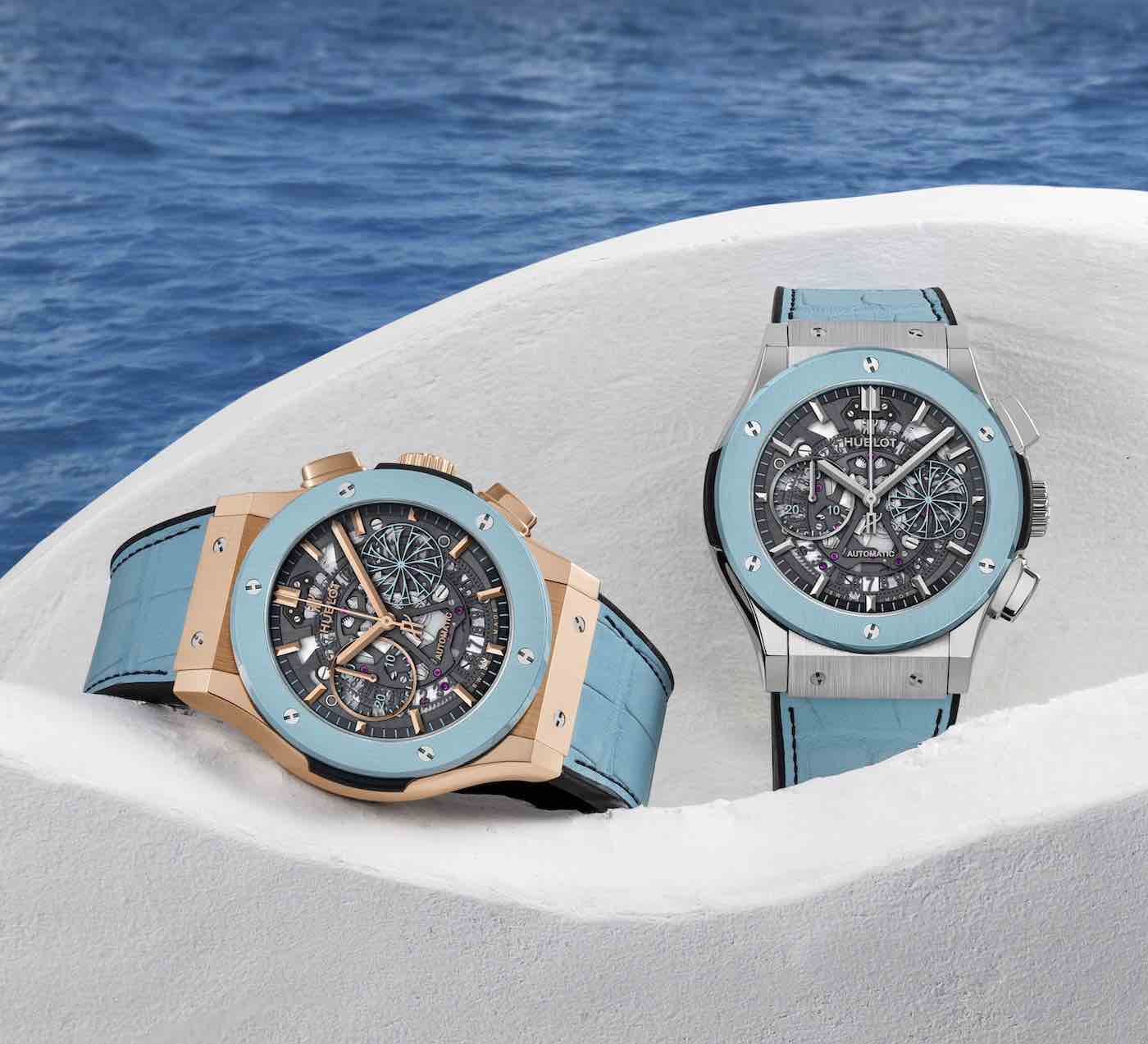 There appears to be a greenish, more turquoisey hint to it that, to my eye, makes it even more feminine than just a straight-up North Carolina Tar Heels shade of sky blue. It is certainly not an unattractive color in isolation, but there is an awful lot of it on this watch, given its use of the polished and satin-finished ceramic bezel and the sunray dial. And at 45mm, this timepiece is no shrinking violet. At least its thickness of 13.05mm is not so significant that this model would wear like a brick on the end of a rope. 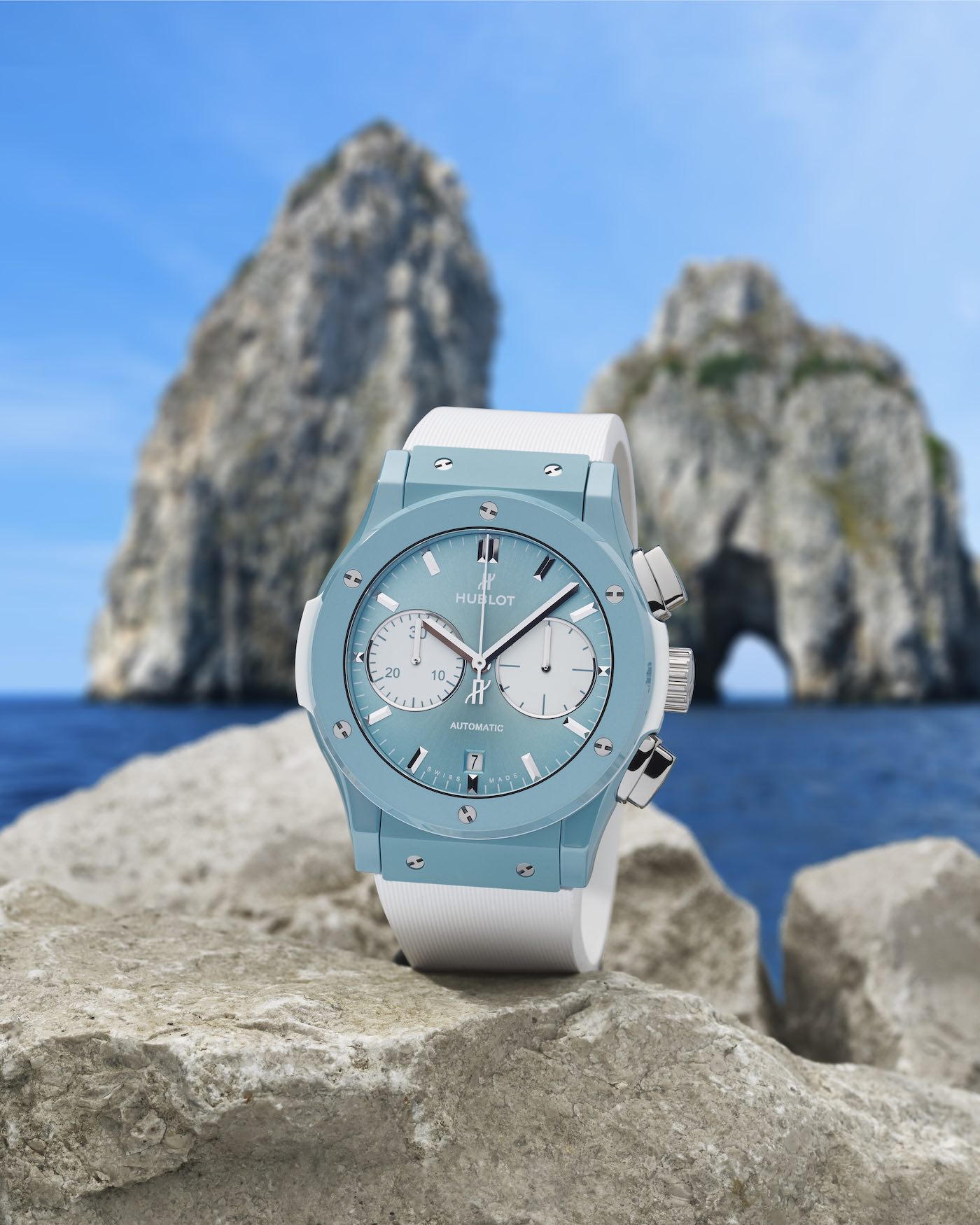 The Ibiza model (521.EX.2090.LR.IBZ19) has identical dimensions but a starkly different colorway. The dark blue ceramic case surrounds a crisp matte white dial with CVD-treated appliques. It is a stark affair, but one that will, no doubt, have its followers. While the goofy caseback decoration won’t be for everyone, I’m sure it will strike a chord with regular visitors to the island and be enjoyed by some. Both the Ibiza and the Capri models are powered by caliber HUB1143, an automatic chronograph movement containing 280 parts. It has an operating frequency of 28,800vph and a power reserve of 42 hours. 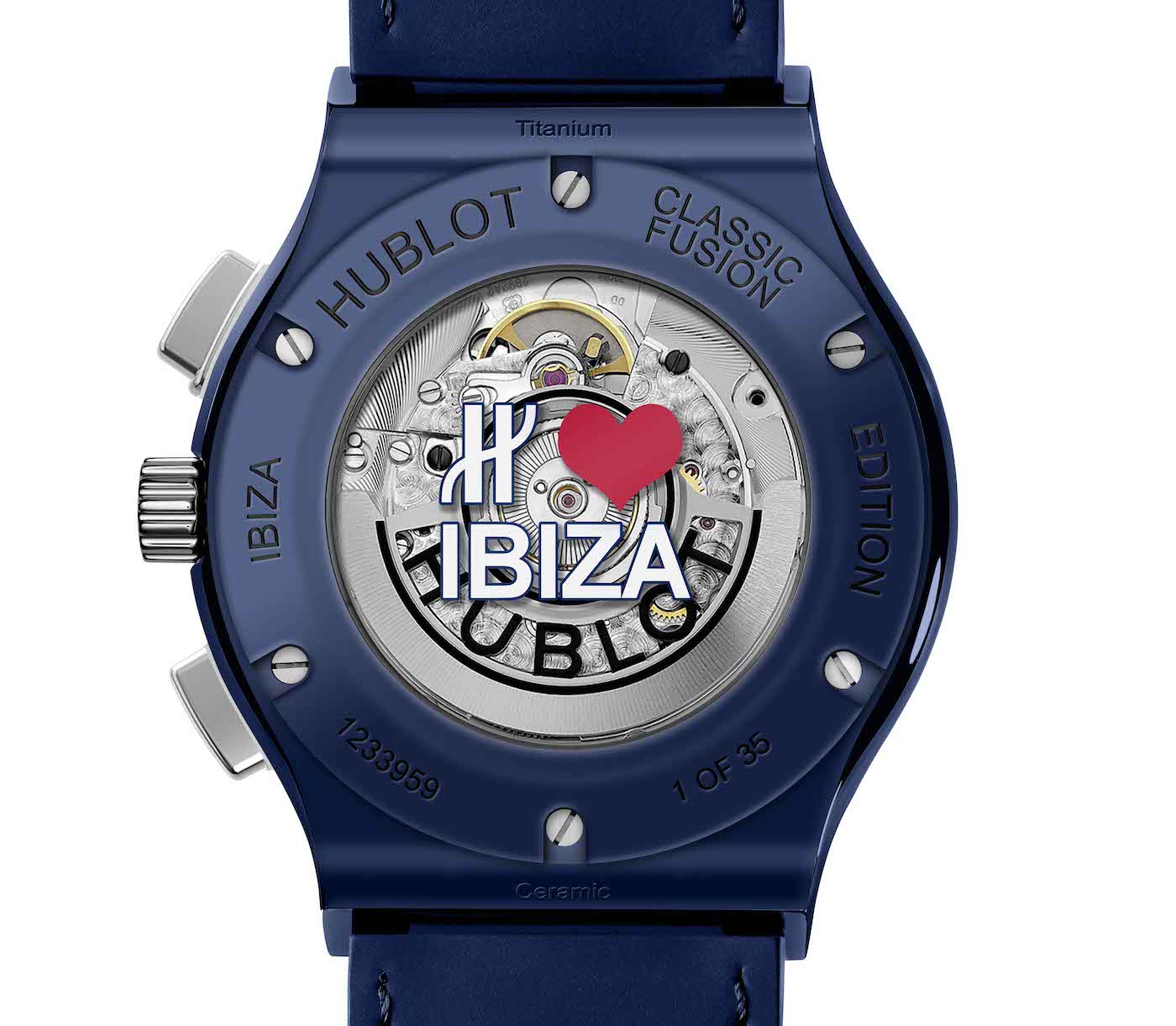 Although I can’t believe I’m saying this, my personal favorite in this release is the titanium-cased Mykonos model (reference 525.NL.0179.LR.MYO19). The island, famous for its wind and traditional windmills, is a popular haven for wealthy tourists quite happy to spend tens of thousands on Mykonos-themed souvenirs (especially of the luxury variety). The main street of Mykonos is heaving with luxury boutiques, and products tweaked to reference the iconic windmills that line the coast, staring down the enthusiastic sea. The skeletonized seconds disc on both the titanium and King Gold versions (reference 525.OL.0189.LR.MYO19) adds a nice flash of color to a wisely austere dial that makes full use of caliber HUB1155’s good looks. While HUB1155 has the same operating frequency and power reserve as the 1143, it has 73 fewer components. Thus, its architecture is a bit more blockish and modernist, lending itself perfectly to skeletonization and dial-side exposure. 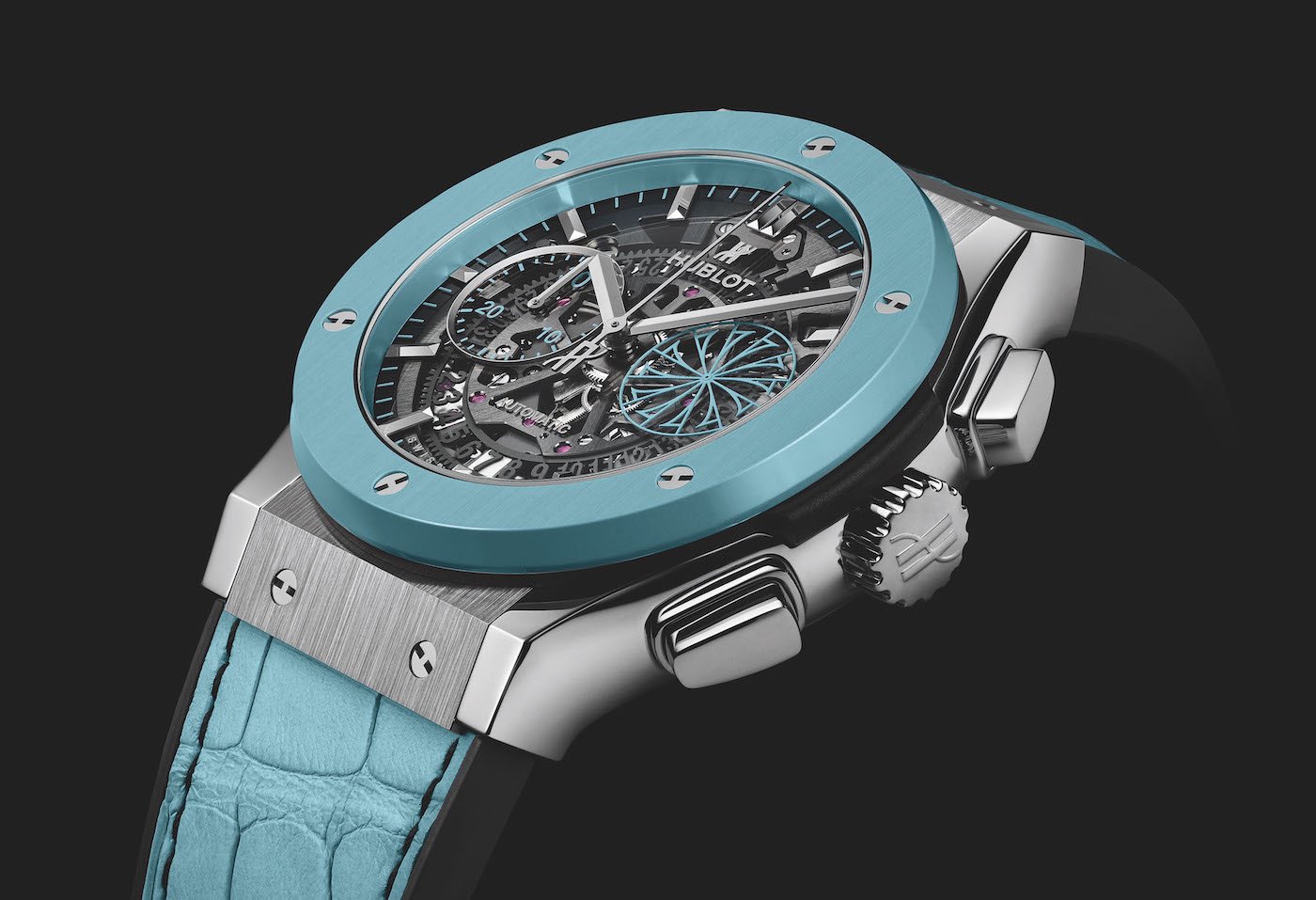 Both Mykonos models are 45mm, just like the Capri and Ibiza variants, but they are a touch thicker at 13.40mm-tall on the wrist. All of these supposedly beach-ready limited editions are water-resistant to just 50 meters, so not really suitable for taking into the ocean with you for a vigorous workout. 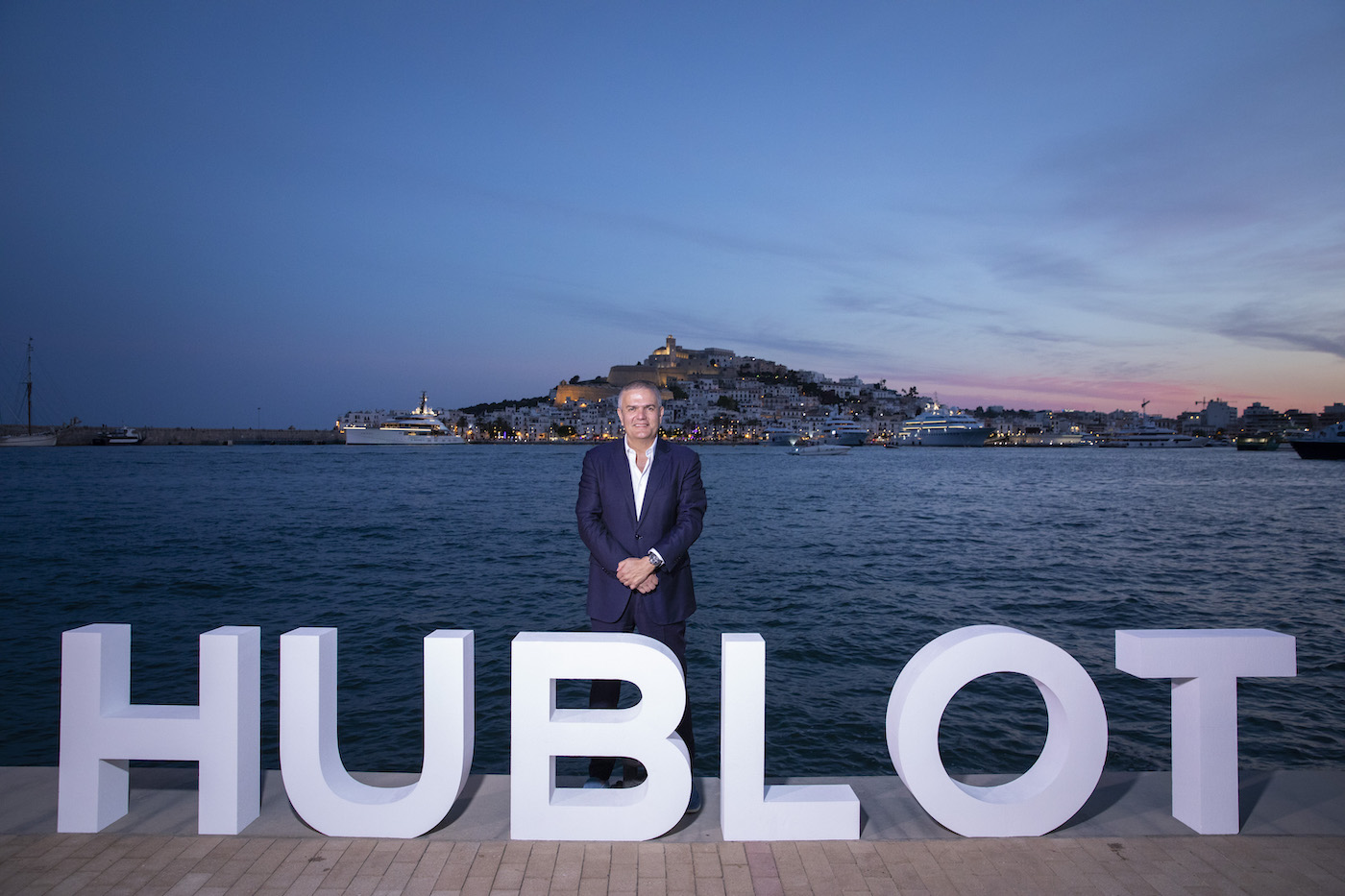 There will be 30 individually numbered pieces of the Capri design, and 50 such pieces for the other models. The Capri model retails for $14,100, the Ibiza version $400 more at $14,500, and the Mykonos models are going for $17,700 for the titanium piece and $33,500 for the King Gold reference. Available now from a Mediterranean island near you. Learn more at hublot.com.