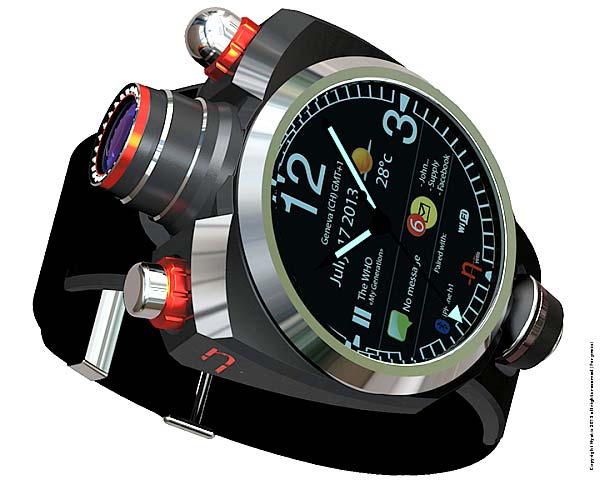 We know that smartwatches are definitely an in thing (and if you don’t, here are some of our articles on the topic), and of course Swiss-made watches are something we’re all keenly aware of. To-date though, those have been mutually exclusive descriptors. And that makes sense, as smartwatches are generally full of radios and other bits of silicon – not exactly conducive to something mechanical. Though, the Crossbow watch by Hyetis will change that by offering what the producers believe to be the best of both worlds.

Arny Kapshitzer and his company, Hyetis, are setting out to change that with their Crossbow Watch – and below we have an exclusive interview with him about Hyetis. While it would be cool to think about a battery getting recharged by a spinning rotor (and those do exist), this is a much more conventional sort of application (if I could call it that). For the Swiss-made part of the watch, Hyetis is planning to utilize a Swiss automatic mechanical movement (the ETA 2836-based HY01), guaranteeing the precision we’ve come to expect from a mechanical movement – even if the batteries go dead. The dial of the watch will actually be a digital screen, with the mechanical movement underneath it. Only the hands will float above the screen.

That leaves us with the smart functionality of the watch to consider – and there is quite a lot of it. Even though the watch portion will run without batteries, everything else requires some juice. For that, Hyetis will be including two rechargeable batteries, housed in the metal attachments of the NATO-style strap. Speaking of that strap, they’re also planning to include biometric sensors as well. Should you not want to know how you’re doing, and are instead more interested in your surroundings, the Crossbow has you covered, as it also manages to pack in an altimeter and thermometer.

Once you’ve got the right conditions, what if you want to take a picture? Sure, you could use your smartphone for that (since you’ll have it along to lash to the watch). Or, you could instead use the included 41 megapixel (yes, 4-1 – I didn’t misplace a decimal point) camera that has an included ring flash. That’s certainly not something any other smartwatch has attempted. Sure, they can control cameras, but actually having a camera on-board? That’s a new trick. Time will tell if that particular feature is more than just a spec-list feature.

Now, how are you going to read all of the information the sensors are picking up, preview the pictures you’re taking, or get all of the notifications from your phone that we’re expecting a smartwatch to be able to handle? Simple – look at the dial. While we’ve got a traditional handset spinning around, the dial itself isn’t like any you’ve seen before – it’s actually a 40mm 160 dpi color display – which means, along with communicating a variety of things, you should have a nice bit of control in customizing the look.

Topping that display you have a sapphire crystal (as you’d expect from a Swiss watch), surrounding that you have a touch-sensitive bezel, which I imagine will be put to use controlling various functions of the watch – including the sync to your iOS, Android, or Windows phone. It’s not just simple Bluetooth connections that this watch handles, either – they’re going to build in both NFC and WiFi.

That leaves us with the case design. As we’ve seen with previous models, it’s something that gets left as almost an afterthought. The Crossbow also has quite a bit that it needs to fit into the case. While it does measure in at 46mm, it’s made of grade-5 titanium and ceramics, so weight should actually be kept down. Talking dimensions and materials is only part of the picture with this case, of course. Take a look at those pictures – have you ever seen a case quite like this? I’m not quite sure what to call the shape, so I’m going to call it a shield case.

By itself, it would be a bold style, but when you add on the protuberances for the camera and (I believe) sensors, it takes on a very science fiction sort of look. On paper (and in the renders), I’m going to say I’m cautiously optimistic about the design of the watch. A design like this will attract attention, and will no doubt be polarizing. Ultimately, I have a feeling that this is one we will actually need to see in the flesh (or at least some good photos) to get a better feel for it… more »