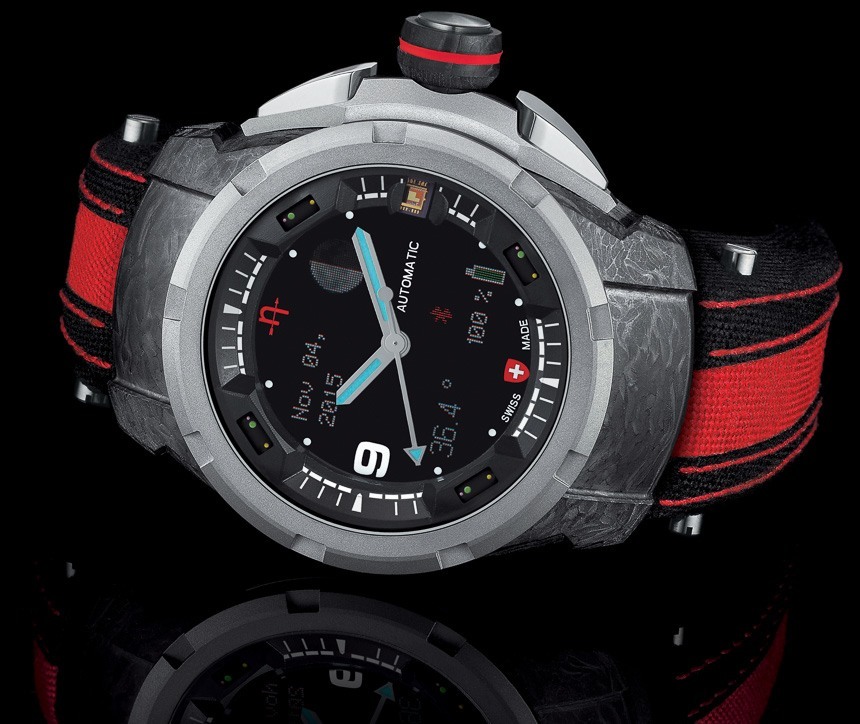 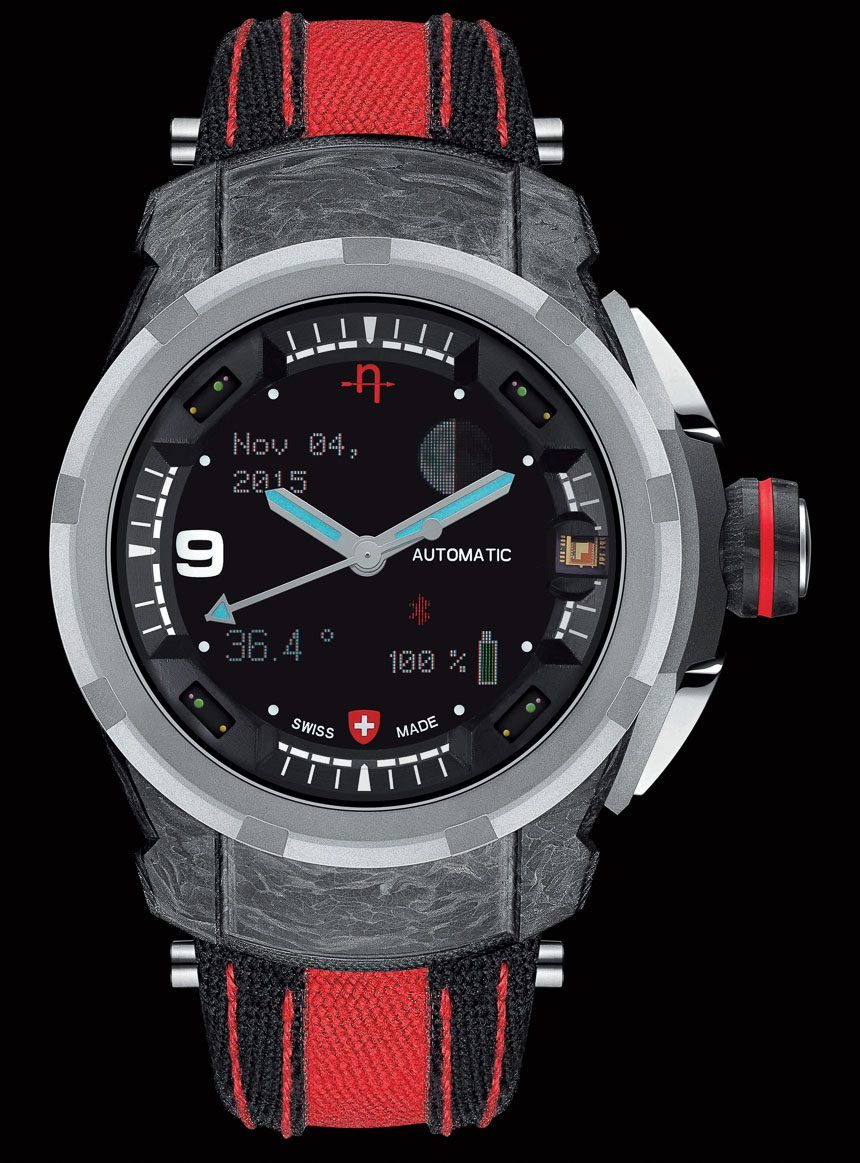 Several years in the making, and following a lot of angry e-mails to Hyetis from customers wondering when they would receive anything, and now Arny Kapshitzer’s Hyetis brand is finally set to ship their first watch – now known as the Hyetis Alpha. Anticipated to be the premier Swiss smartwatch and mechanical watch combination product, the Hyetis Alpha was never actually supposed to be the brand’s initial launch. In 2013, aBlogtoWatch interviewed Arny during the debut of the Hyetis Crossbow which was supposed to be their first release. Just over a year ago in 2014, we teased the then-named “Hyetis Redline” watch here, and it was clear that the Crossbow was either canceled or delayed.

The Redline has since had its name changed to the Alpha and, according Hyetis, the watch will begin shipping in January 2016. So, let’s take a look at what the Alpha promises to deliver and why it took Hyetis so long. One of the things you need to understand about Switzerland and smartwatches is that there is a built-in sense of contention because the watch industry wants to promote the timelessness of the mechanical watches while also celebrating the spirit of innovation. This has meant a slew of devices, ranging from concepts to commercially released products, that attempt to integrate the world of traditional as well as modern watch making. There are too many examples to mention here, but what seems to be a favored approach is to combine the two.

Recently, TAG Heuer debuted their Connected smartwatch (hands-on here) that costs $1,500, with the option after two years for customers to “trade-in” the smartwatch for a mechanical watch with the same case (for another $1,500). So, that is one approach. Hyetis all along wanted to combine the two in a single product offering the heart of a mechanical watch movement along with electronic elements and a screen.

The only other company I’ve seen do this with any degree of success is Kairos (hands-on here), but they use a slightly different approach by having the hands from the mechanical watch literally underneath a semi-transparent screen for the digital read out. Hyetis uses two OLED screens which surround the traditional watch hands – an approach I appreciate because it doesn’t inhibit legibility. 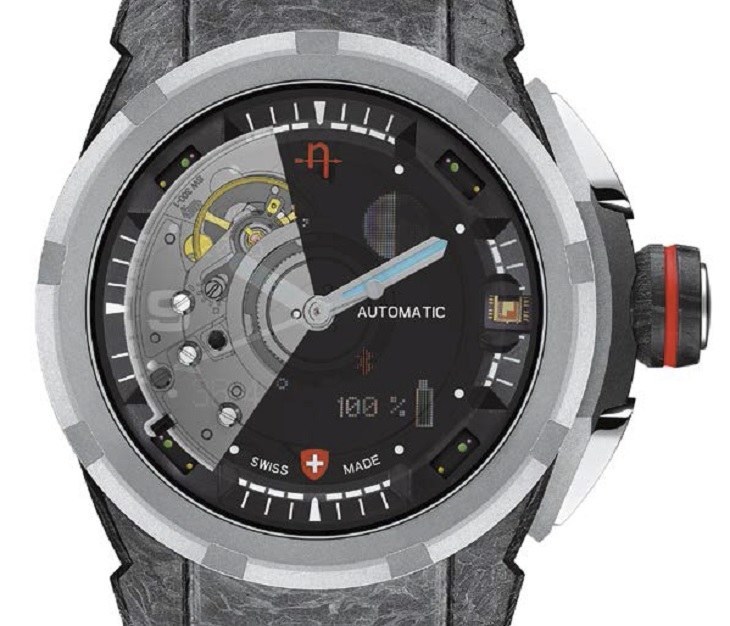 One of the most interesting elements of the Hyetis Alpha is its approach to being a smartwatch. Hyetis apparently developed its own in-house operating system known as ChronOS that they say is compatible with both Apple iOS and Google Android operating systems. The operating system is based on FreeRTOS, and according to Hyetis even the programming of the operating system for the Alpha was done in Switzerland. As a smartwatch, the Hyetis Alpha will offer notifications and the ability to dismiss incoming calls. It isn’t trying to compete with the Apple Watch or Google Android Wear devices – mostly because they really can’t. The Hyetis approach to the smartwatch is that people want the watch to exist less as a second screen to their phone and more as a personal and environmental sensor device – which the Hyetis Alpha appears primed to be, with lots of interesting features.

Laser beams placed at several points on the watch face allow for gesture control of the operating system, which is interesting because it implies you don’t actually need to touch the sapphire crystal display. The gesture control along with the crown that doubles as a pusher (as well as traditional crown for the mechanical movement inside the watch) appear to be the input controls. 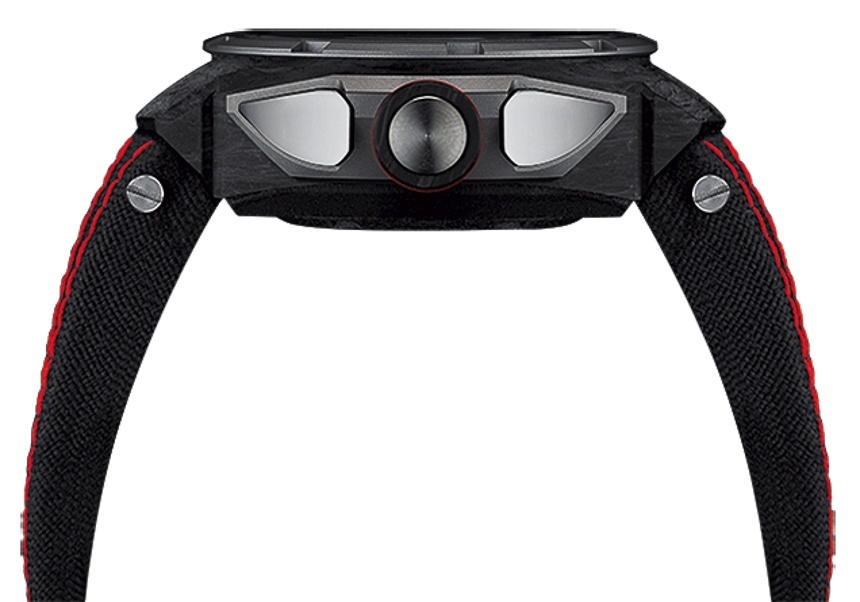 The Hyetis Alpha as a smartwatch is all about logging what you do and, ideally, informing you of important information about your biometric and environmental status. At the 3 o’clock position on the dial is a UV dosimeter which measures exposure to ultraviolet rays, which should be interesting in terms of how it is used in the software. Other sensors built in to the Hyetis include a gyroscope, magnetometer (used to measure magnetic fields), accelerometer, barometer, altimeter, hygrometer (humidity sensor), thermometer, heart-rate monitor, blood oxygen saturation monitor, and GPS signal receiver.

The list of included sensors is impressive, but it has yet to be seen how the Hyetis Alpha will make use of all this information and how it will benefit the wearer. This wouldn’t be the first time a smartwatch was released with an impressive list of functions only to not actually work very well. With that said, I have high hopes for the Hyetis Alpha to be the type of product I was hoping for the Casio ProTrek to become. Of course, the Hyetis Alpha is a high-end luxury product, but I hope it helps teach more mainstream products about how to build a device for the wrist which not only acts as a watch but also helps give the wearer useful information about the world around them and their own physical performance. 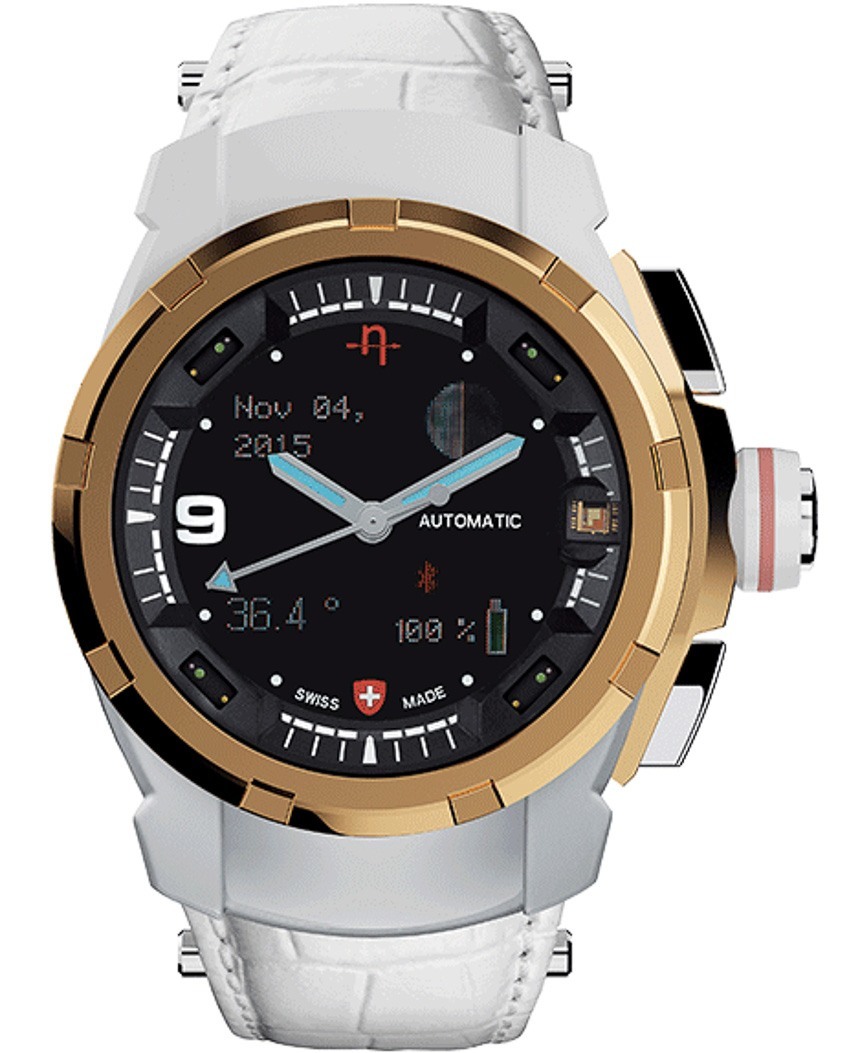 Consider a smartwatch, for example, that simply pulls weather information from the Internet. The Hyetis Alpha is technically a small weather station on your wrist and can tell you what is going on exactly where you are and where the nearest connected weather station is. Of course, there are the health and fitness elements as well. On the Hyetis Alpha case is a similar assortment of four light sensors, perhaps similar to those on the Apple Watch, which are how the device will measure things such as the wearer’s heart rate.

It is too early to tell what the real-world performance of the Hyetis Alpha will be like, but I firmly believe that the company’s philosophy toward what a smartwatch should be is spot on, for the most part. As I said, the dial uses two OLED screens to indicate a variety of information around the traditional hands for the minutes, hours, and seconds. This analog time display is powered by a Swiss Sellita SW300 automatic movement. Not only is there a real automatic mechanical watch inside of the Hyetis Alpha, but if your battery dies, at least you can still tell the time. Moreover, it means that there is a “real” dial all the time (never a blank screen), which is a crucial part in a timepiece having the necessary character for watch enthusiasts to consider it as having a “soul.”

The electronic innards of the Hyetis Alpha include a 180 MHz ARM processor chip and 4GB of storage. In the video further above, you can see examples of how the system is used. I very much hope that part of the “smart” functionality of the watch will include being able to control, adjust, and view information from the watch via your phone. As a device that includes a series of sensors that your phone does not, a great application for the Hyetis Alpha would be to lend its data to more process-intensive applications hosted on your phone that can make use of that information. I have doubts about the Hyetis Alpha’s ability to make the best use out of the data it is collecting, so it makes more than a lot of sense that software on your phone rather than on the watch is used to process what all the data means in terms of both your physical status as well as the environment around you.

In terms of battery life, Hyetis claims 24 hours of use, which isn’t amazing, but is on par with other smartwatches out there – more on that below. Battery life is a huge issue based on technological limitations that no one has a solution for quite yet. In a recent chat with top people from both Google and Intel, I was told that while nothing is ready yet, their own technology labs are working on new types of battery technology that we hope to see as being marketable a few years from now.