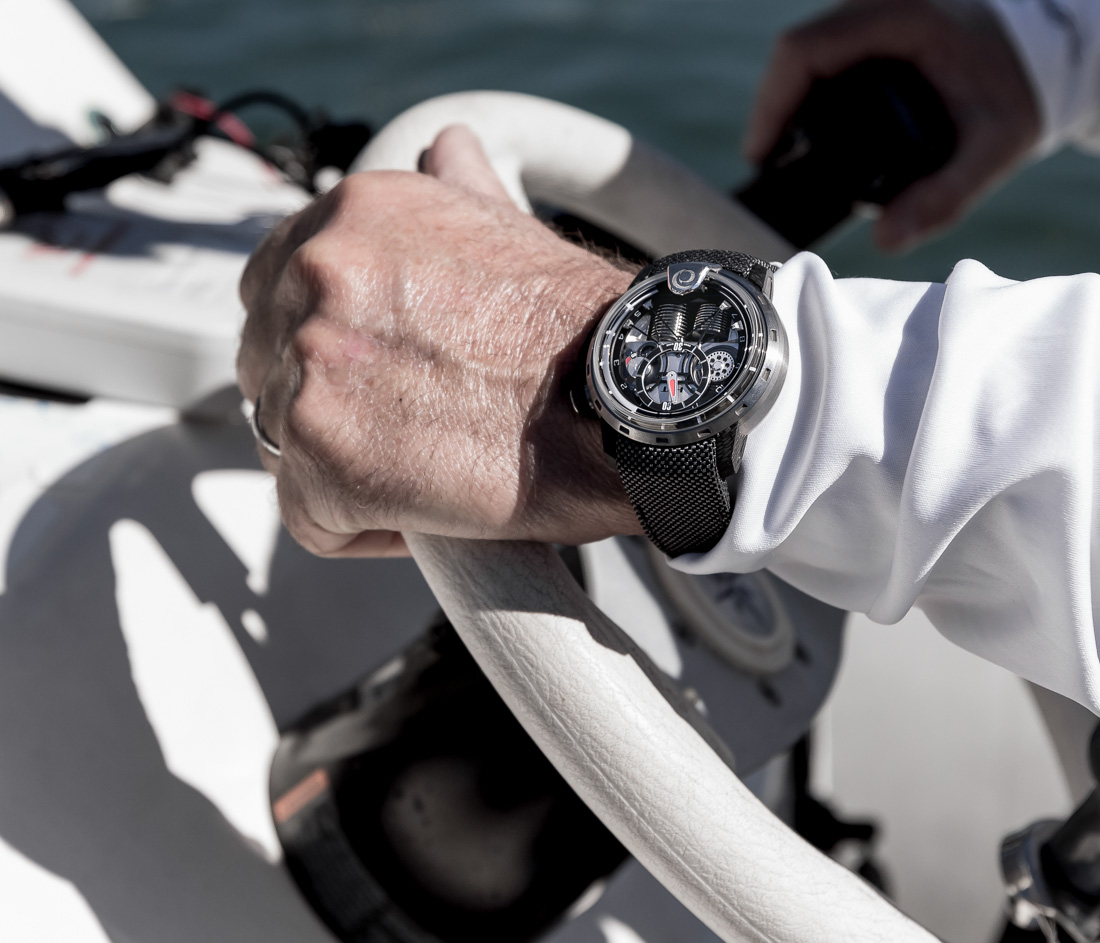 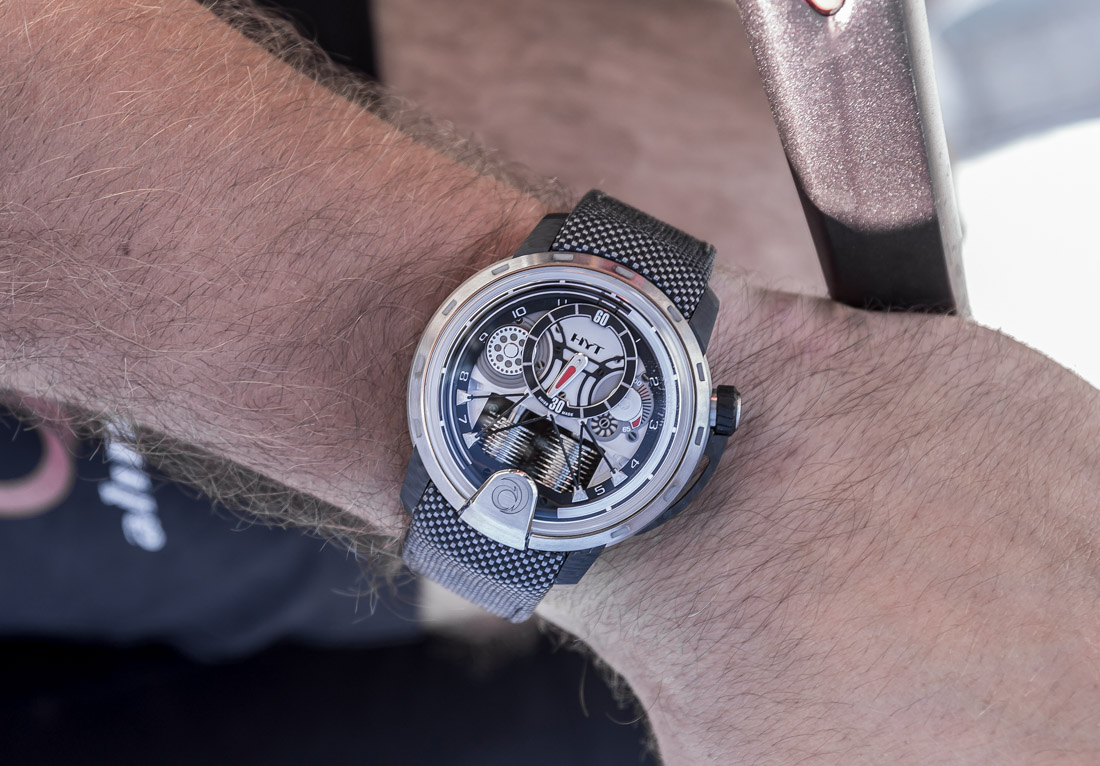 For me, sailing-themed watches tend to be bold in color, and/or have multiple obnoxious colors riddled all over the watch face and bezel, just like their sailboat counterparts. At times, I feel as though watching a regatta (a series of boat races, primarily rowed or sailed) is as confusing as trying to read the time on one of these sailboat racing-themed watches. HYT recently released the third iteration of their Limited Edition Alinghi watch in partnership with Team Alinghi and though it retains its H1 DNA, it’s a great improvement over previous versions of their Alinghi watches. HYT officially released the HYT Alinghi H1 timepiece (limited to 20 pieces) at the Ft. Lauderdale Boat Show this year, but I got some hands on time with it during ACT 7 of the Extreme Sailing Series in San Diego, CA. 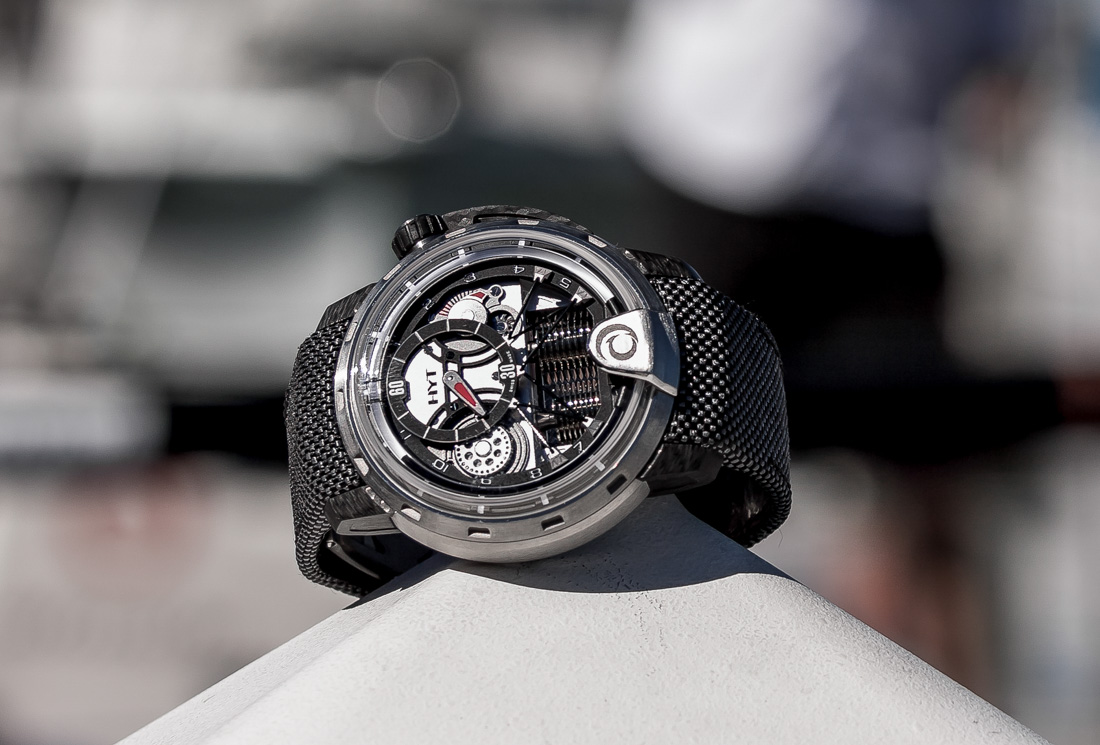 All images by John Kim 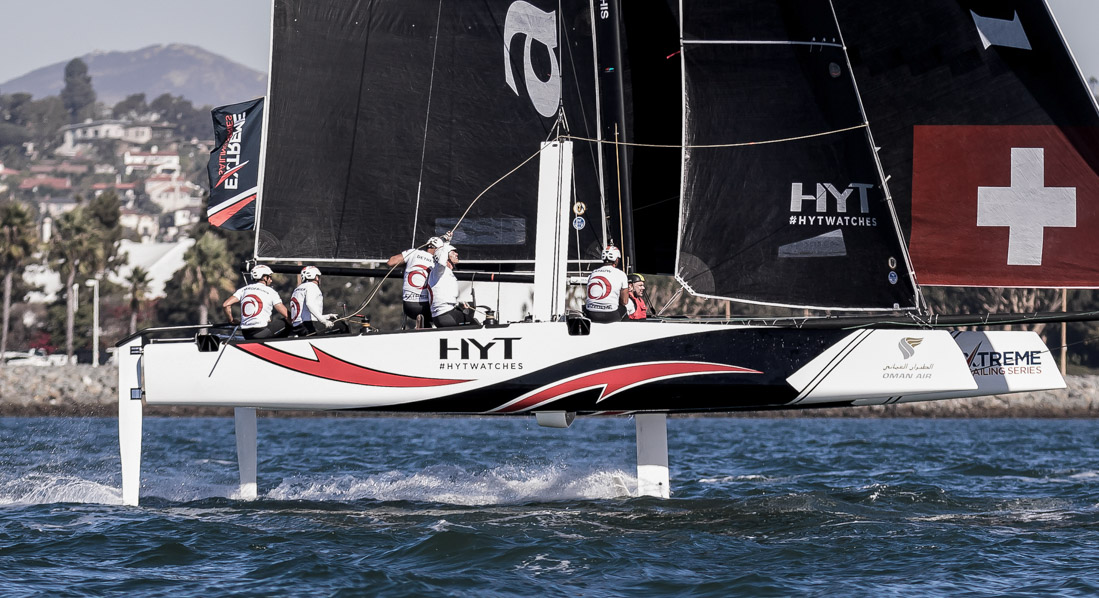 The Extreme Sailing Series is a smaller inshore stadium version of the America’s Cup where they use a smaller vessel, the GC32 dual hull catamarans. The courses are shorter, the boats are smaller, the action is quicker, and it’s all happening right in front of you while you’re drinking your mimosa or a fine glass of scotch. The idea behind the Extreme Sailing Series is to bring sailboat racing into a more spectator-friendly platform, allowing you to watch the race sitting on the shore (preferably in the VIP tent), aboard a party barge, on a team rib boat (which follows behind the sailboat during the race) or actually on the GC32 itself. To be honest, it’s kind of a refined version of monster truck racing; you don’t know exactly what’s happening, but it’s definitely cool looking! Sailing, sailing, sailing! 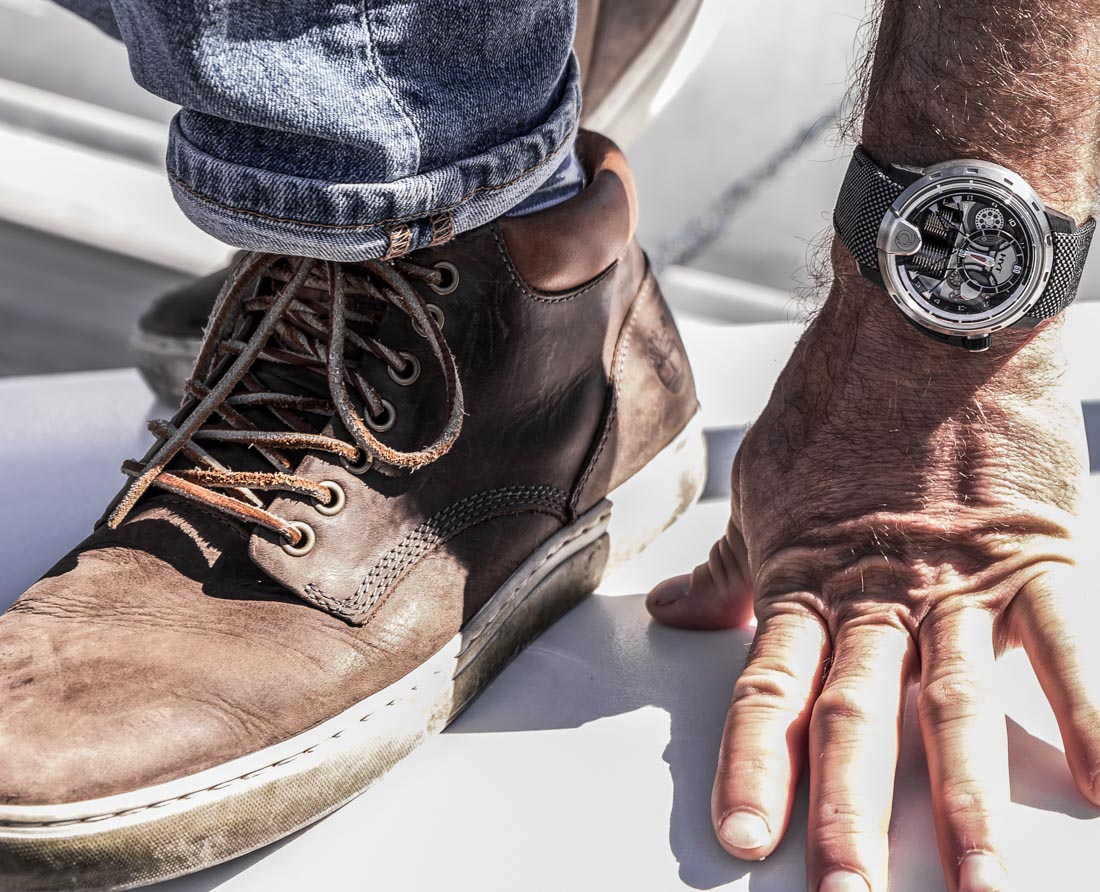 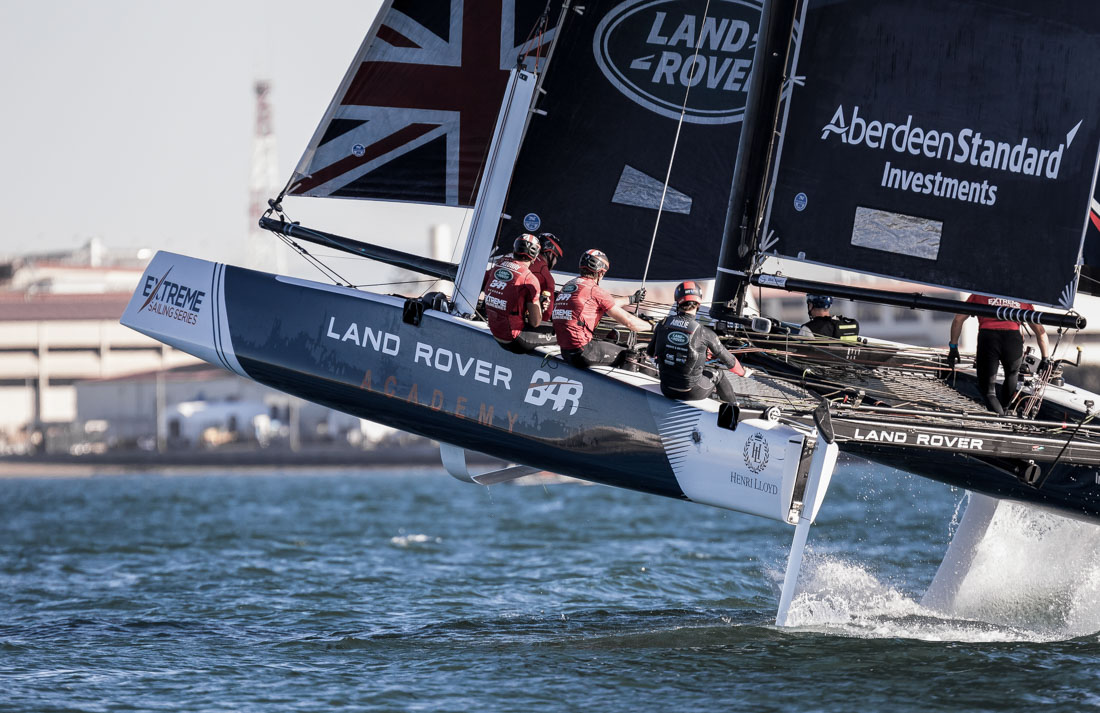 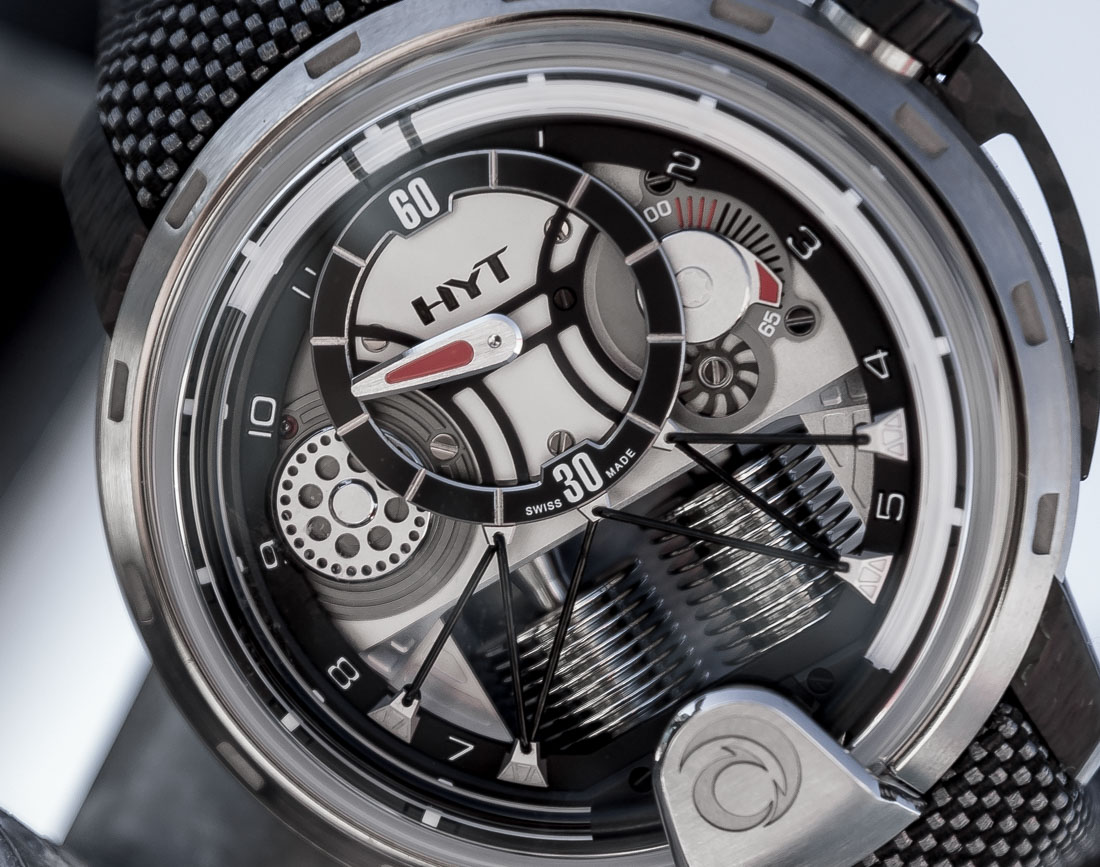 In past articles, we’ve noted that one of the great characteristics of HYT watches is the high definition look they have when experiencing them in-person. This is still the case when examining the H1. Peering into the HYT calibre movement and observing its 48.8mm titanium and forged carbon exterior, you notice all the little details and the micro contrast separating one part from another. The materials of this watch are a perfect compliment to each other and parallel the marriage of titanium, carbon, and high tech materials that are used to build these catamarans. 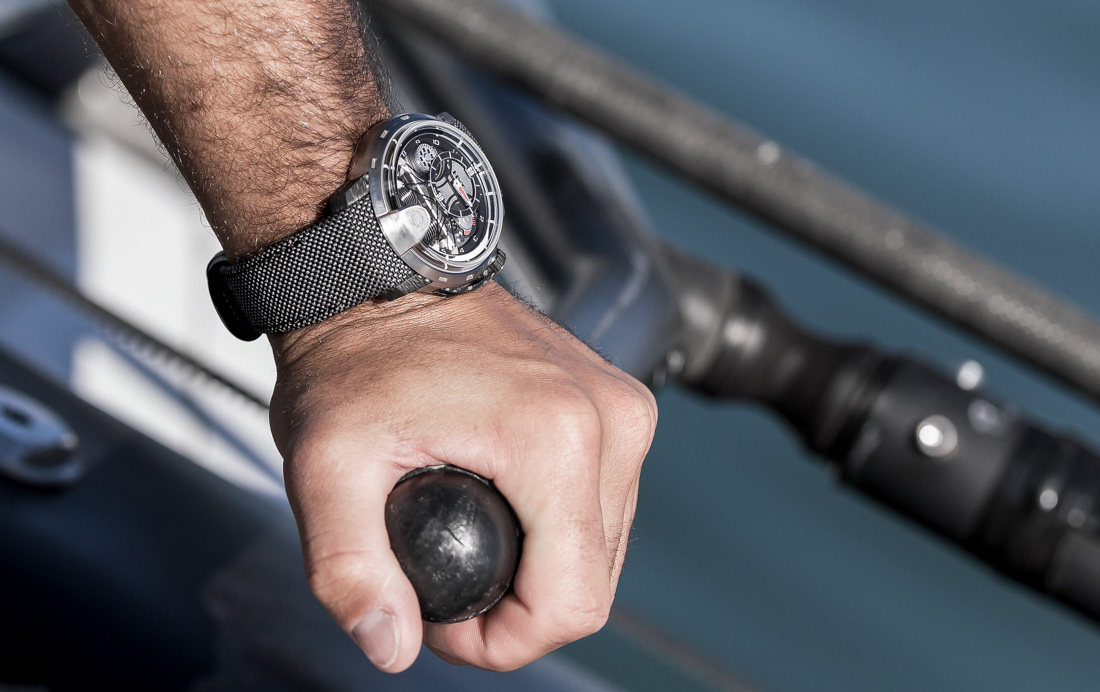 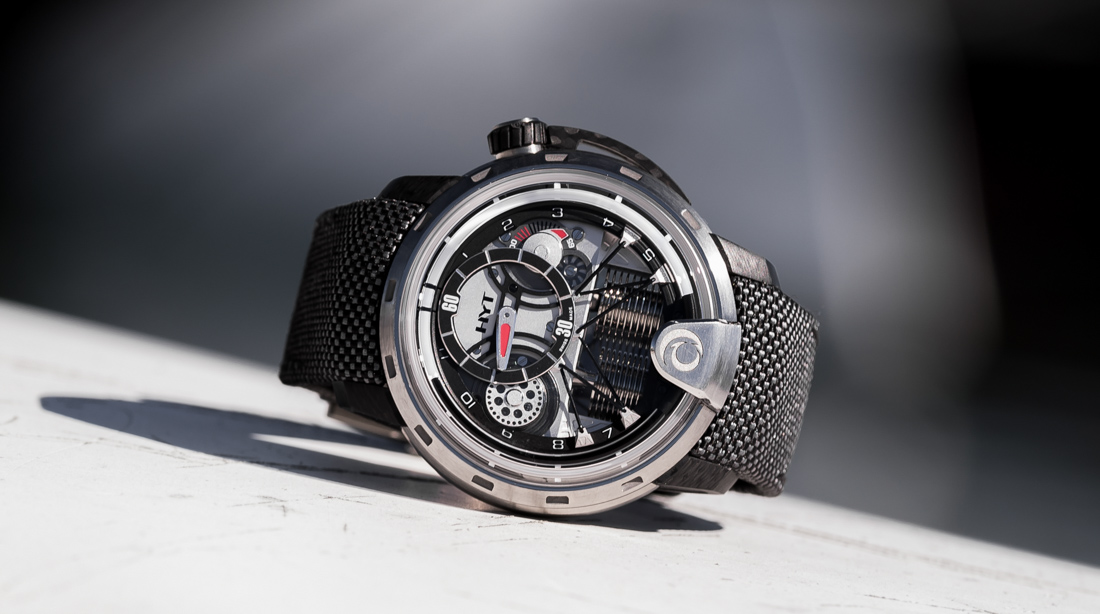 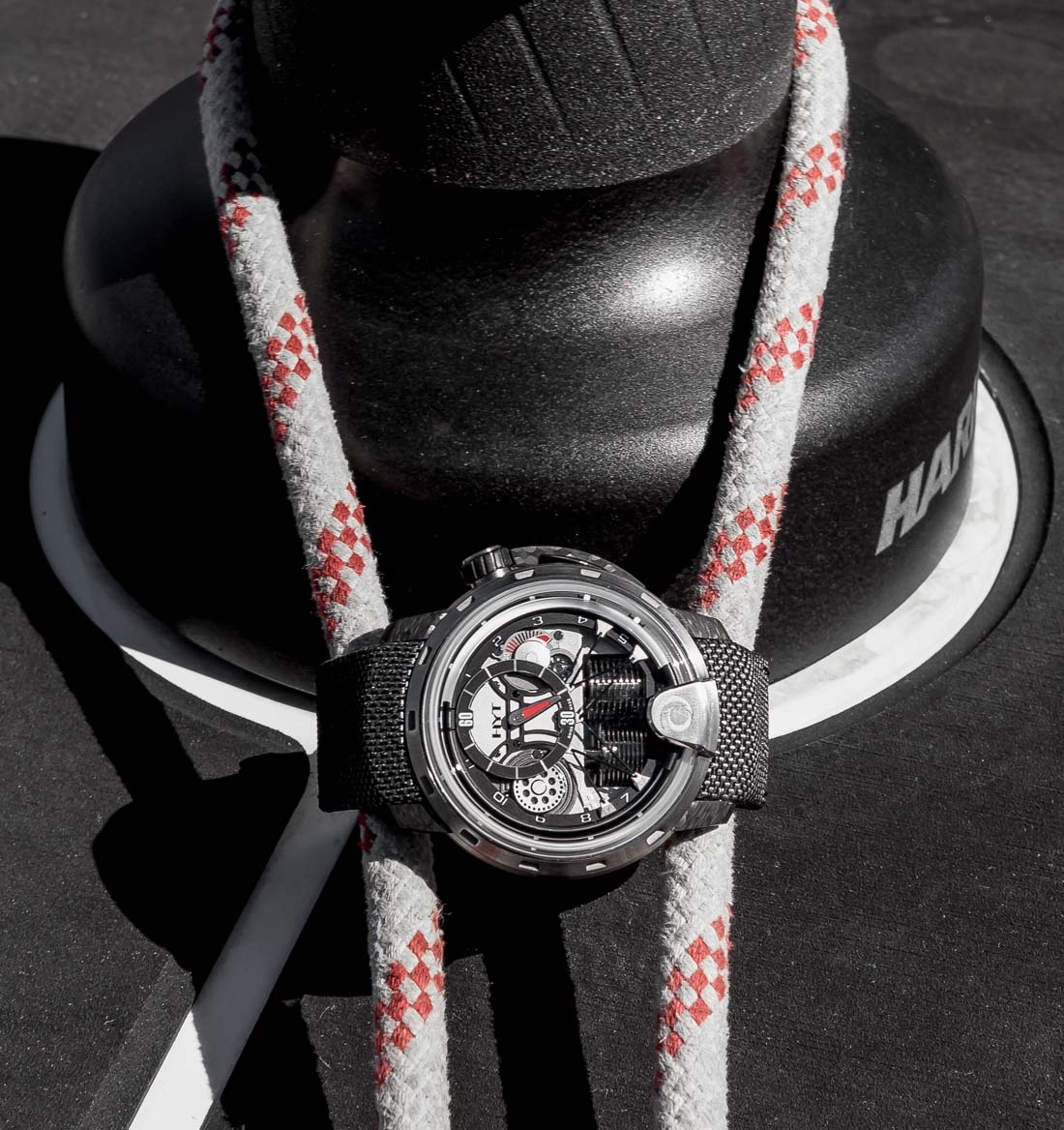 The Alinghi H4 had very bold highlights along with its mechanical “LED light show,” and the H2 had an intricate Matrix-esque bridge maze, but both sported very large Alinghi logos. The third version in H1 guise is quite attractive and a happy medium between previous versions, balancing the red highlights and Alinghi logo into a tasteful timepiece. The subtle Alinghi logo at 6 o’clock is a nice update to the in-your-face red logo that was on the H2. The back of the watch is sealed from the elements by an engraved Alinghi screw-down caseback, which I actually preferred over the full sapphire back of the H4. 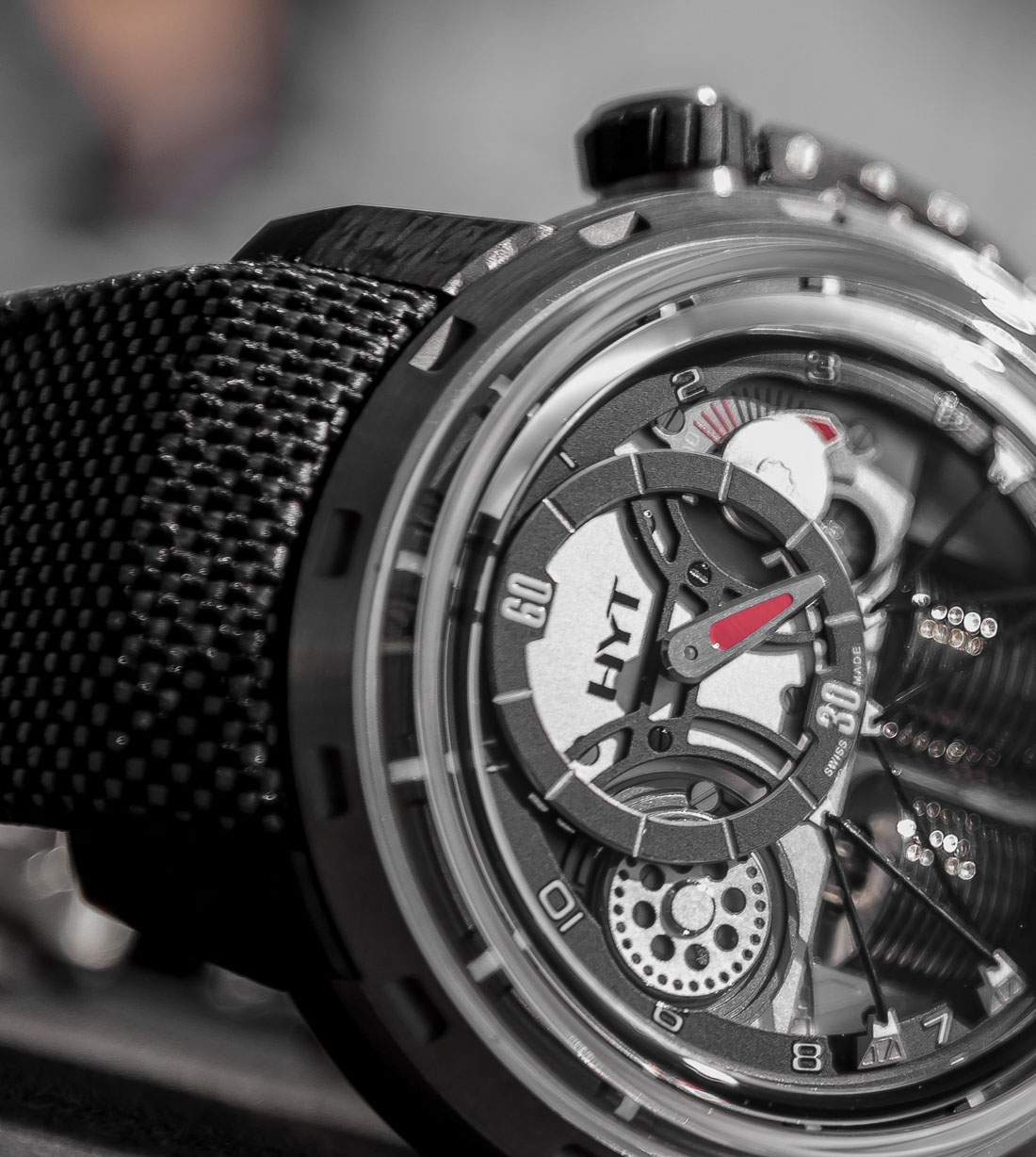 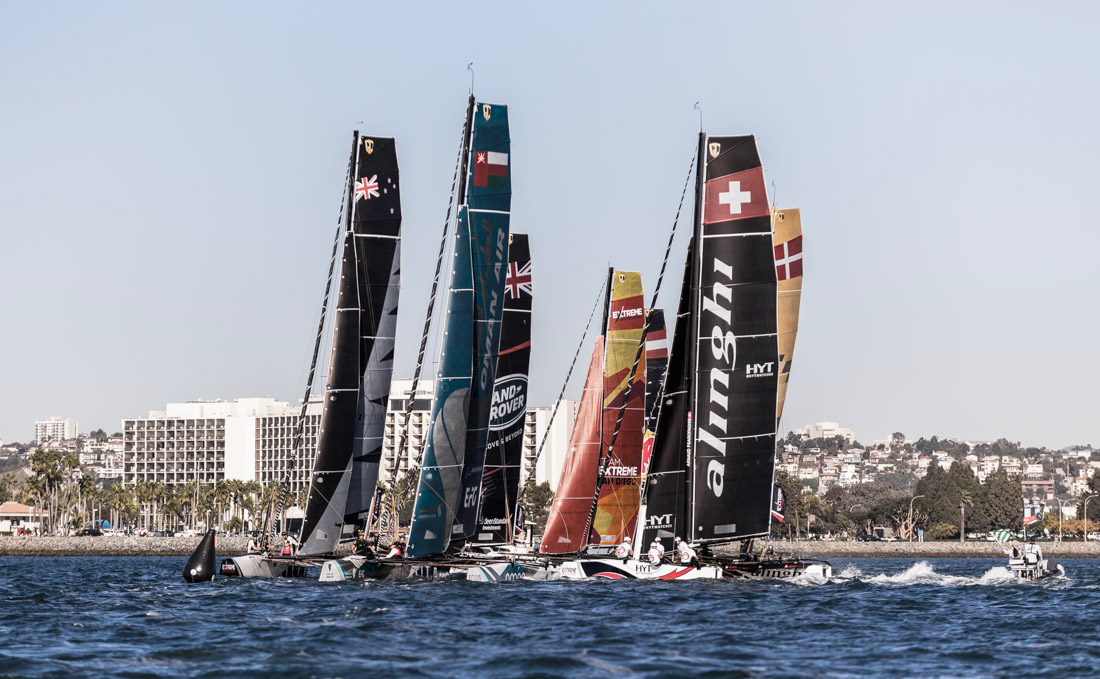 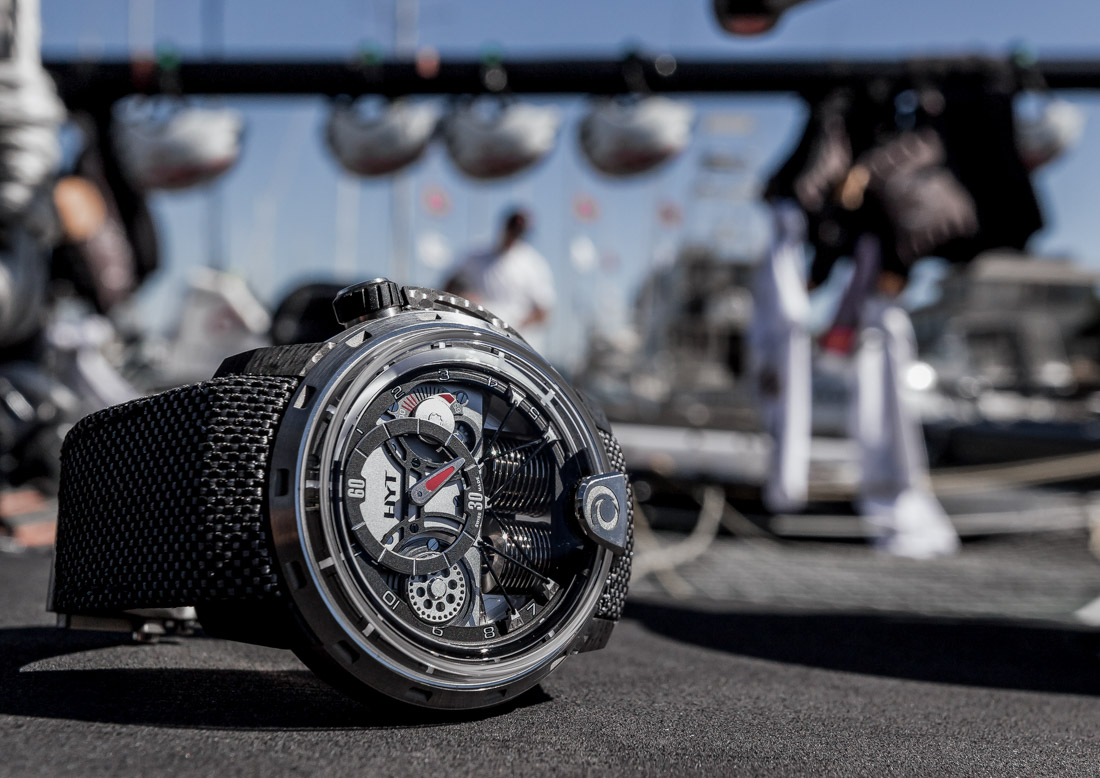 Spending time on the GC32 during their pre-race practice runs further allowed me to appreciate the details of the watch. The parallel hulls of the catamaran are made out of carbon fiber and inspire the forged carbon fiber lugs on the watch. The dial work is intricate yet not too busy, allowing you to clearly see the individual key elements of the watch face. The minutes ring is “suspended” and linked to the hour dial by a black synthetic thread, reminiscent of the web of synthetic rope linking every part of the boat as one entity. Seconds are clicked off by hands that have been reworked to look like a gennaker furler, and the power reserve gauge has been made to look like a winch. Good news is you don’t have to service the watch as often as the winch that was in use during the event, which required a rebuild after every race. 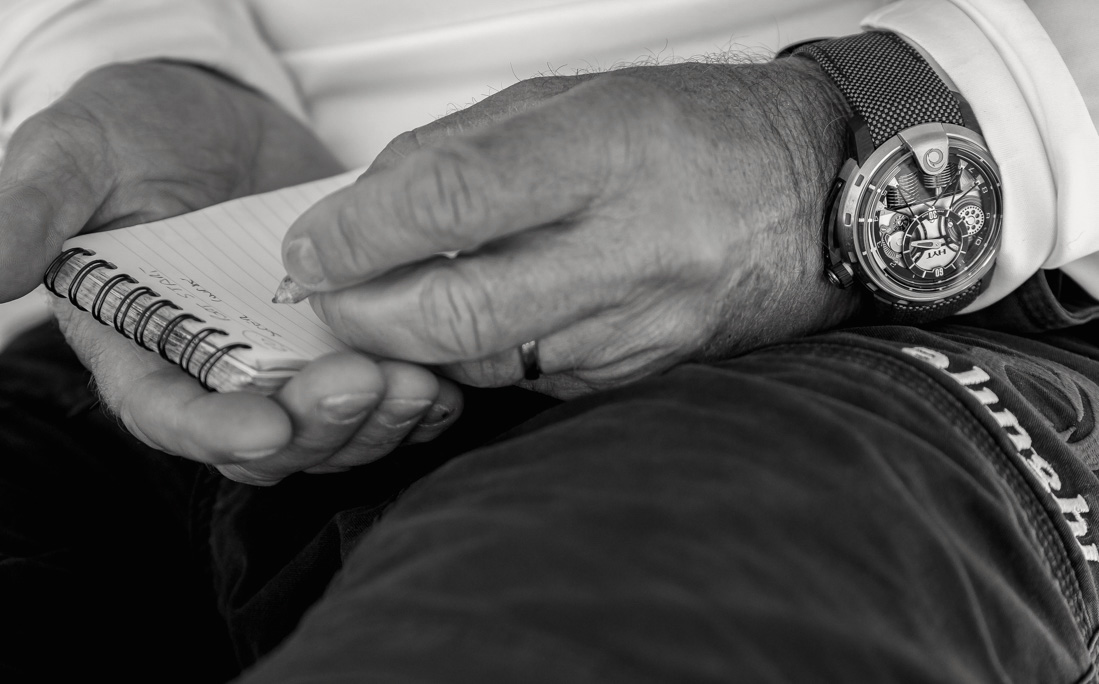 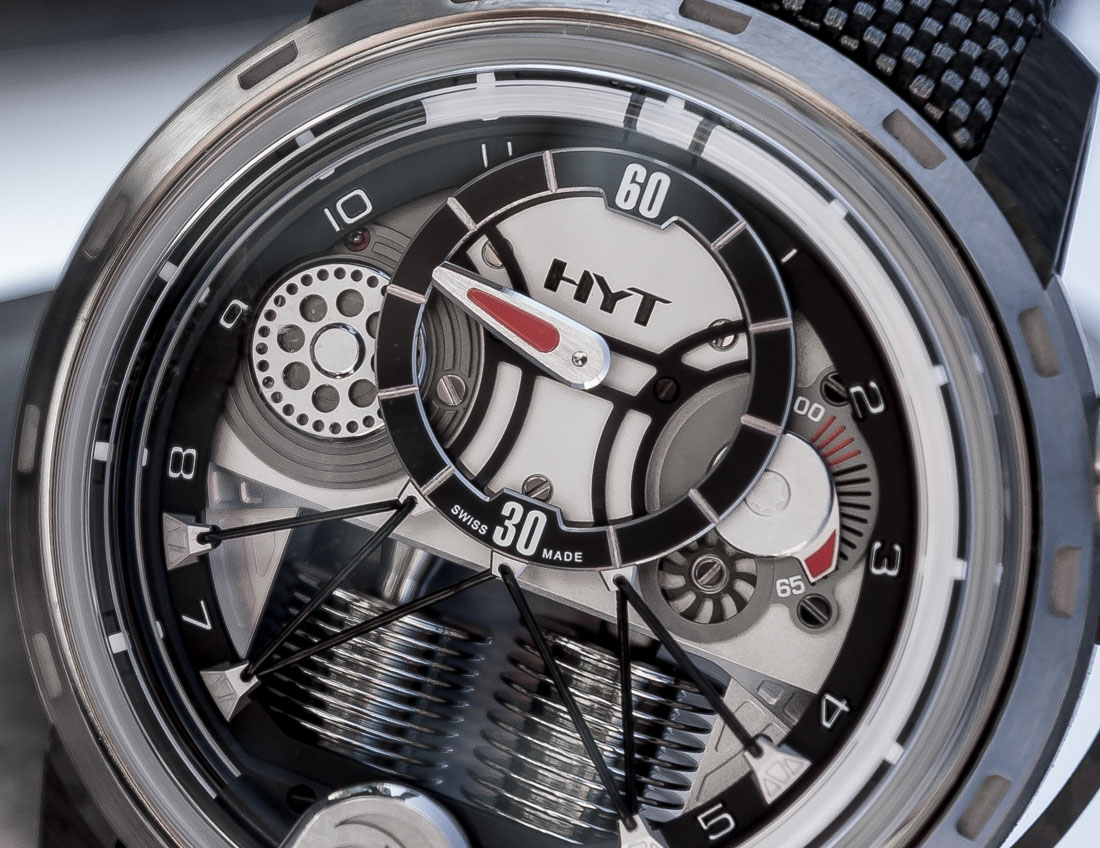 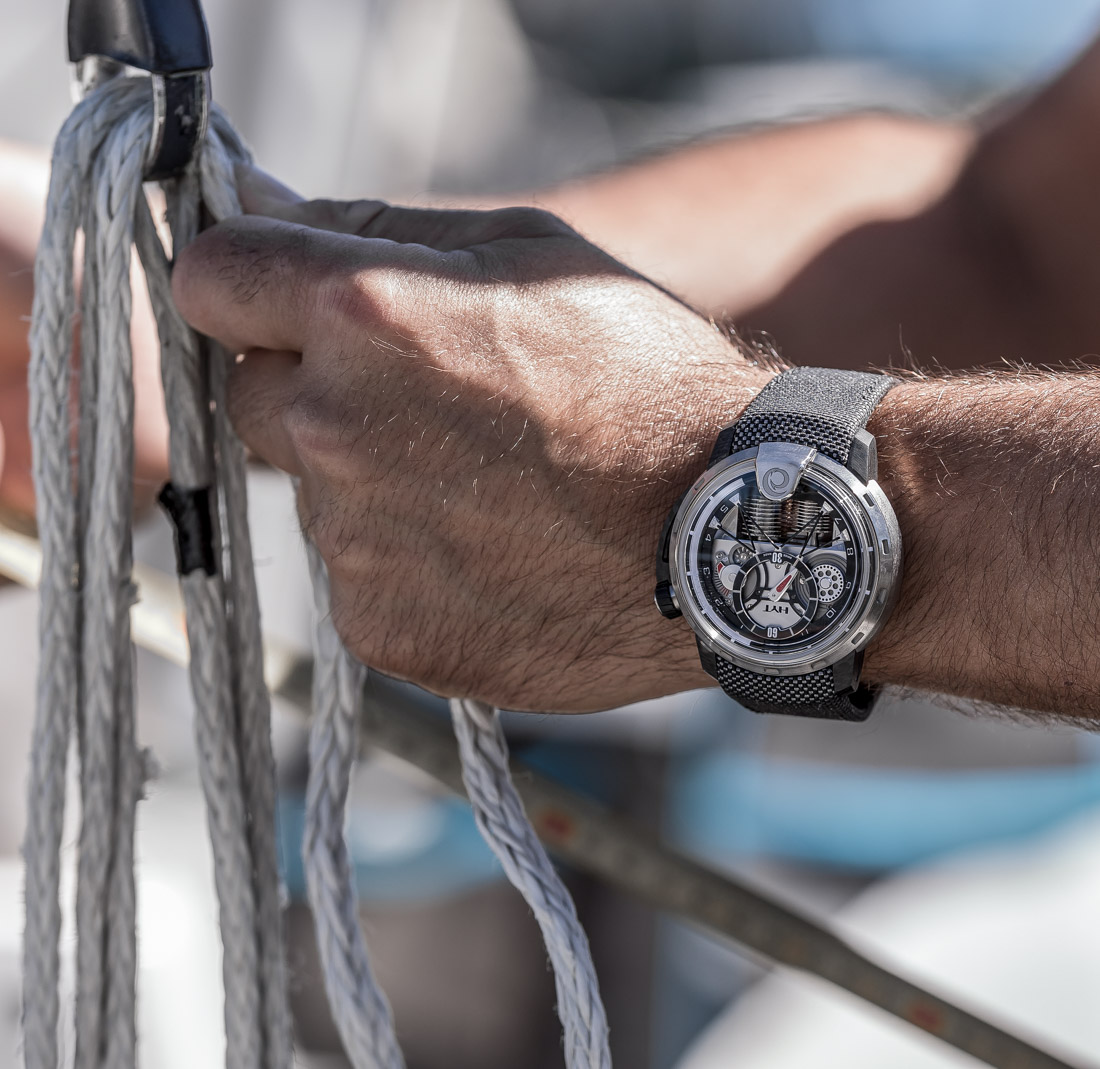 Earlier in this article, I took a jab at the legibility of sailing-themed watches, but honestly, the HYT Alinghi H1 isn’t horrible and it’s definitely easier to read than most nautical-themed (let alone regatta) watch faces. Many times they can look like the top down Google Maps view of an IKEA furniture junkyard. As for HYT, they have gone back to black fluid in the tubes to designate the hours, but this time they’ve filled the hour chapter ring with Super-LumiNova, which creates a reverse time telling effect in the dark as it glows through the clear part of the liquid. The issue with the black fluid is that on a mostly monochromatic dial face, the “hour indicator” blends in with the background in plain daylight. At times, I felt like I was wearing a minutes regulator with no sign of the hours to be found. 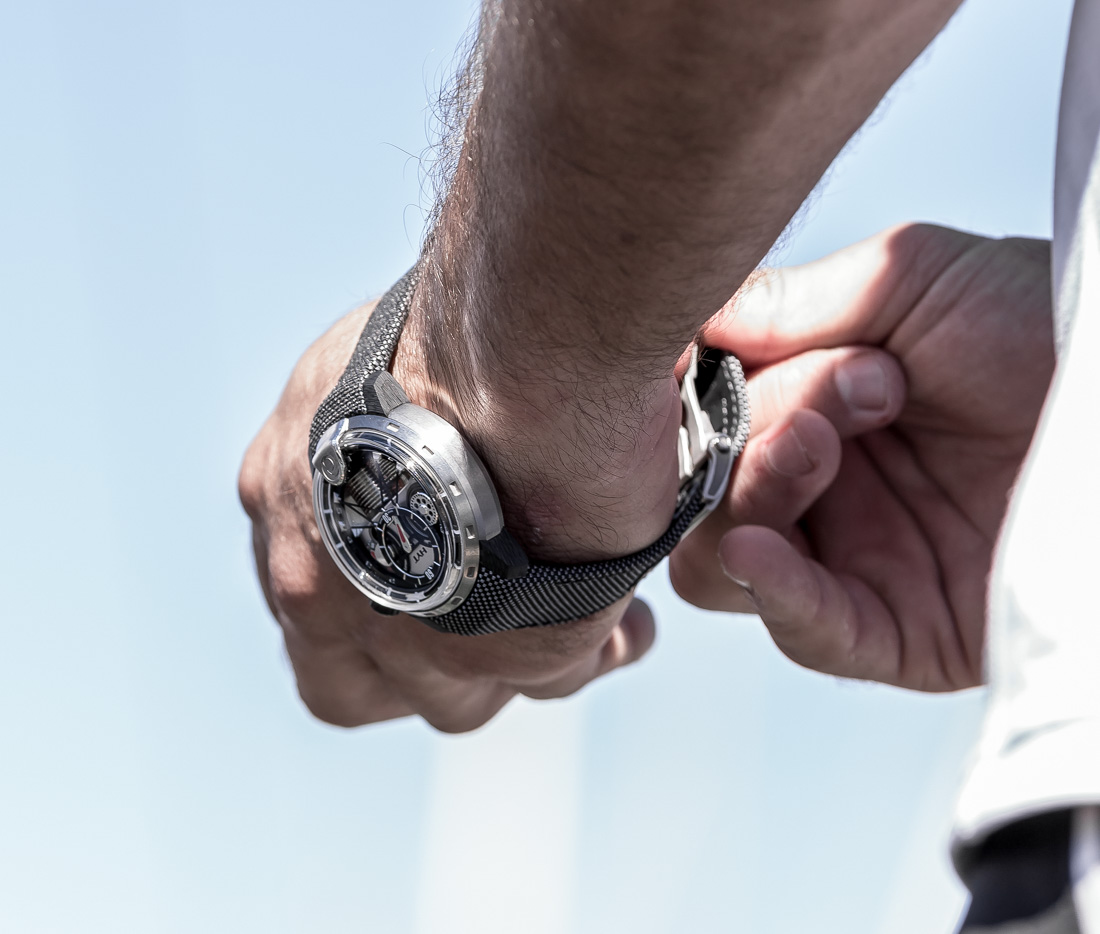 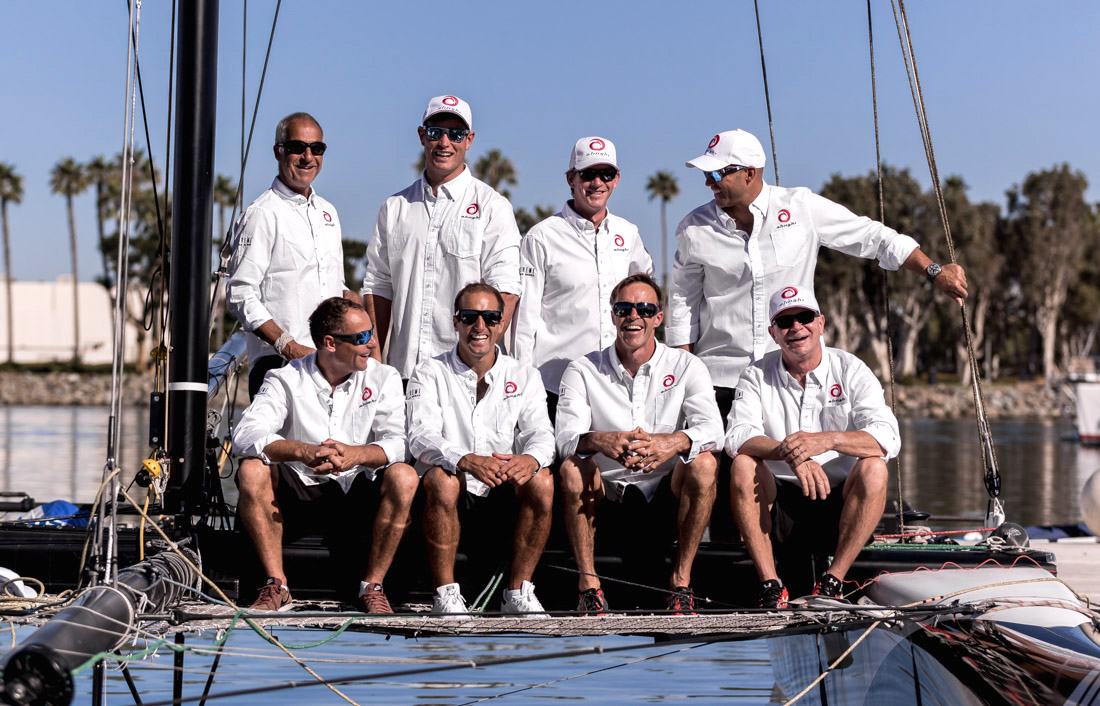 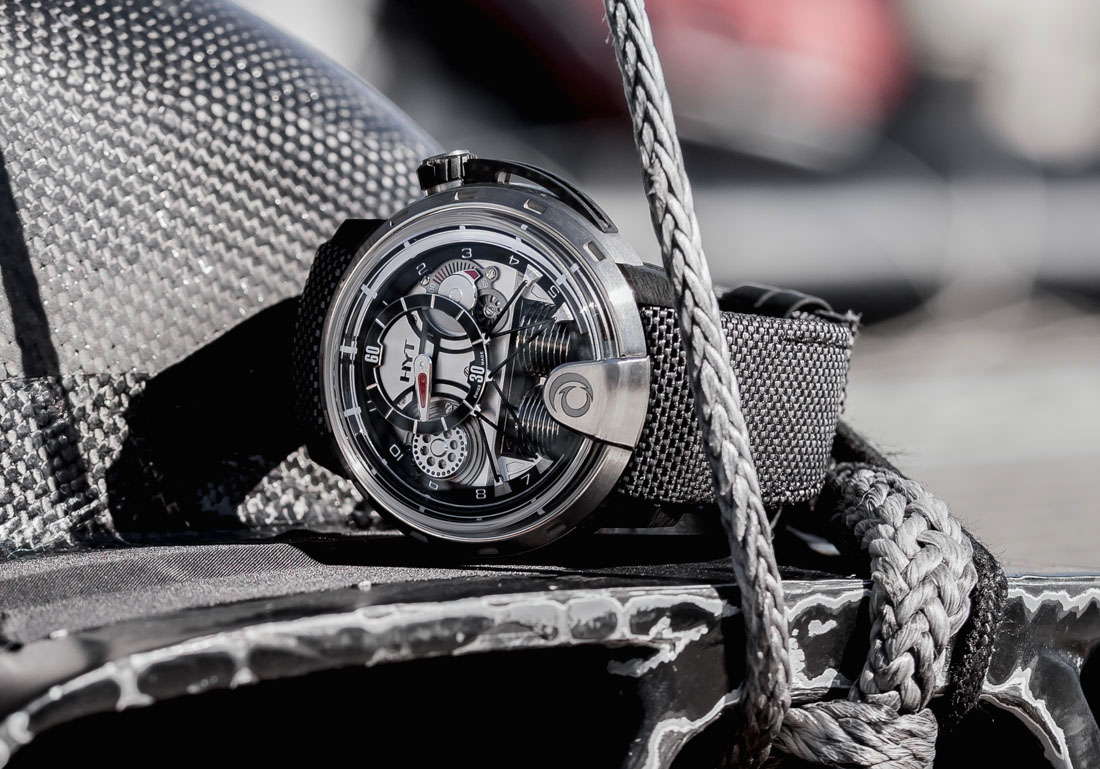 In my opinion, the HYT Alinghi H1 is a great addition to their current collection of watches. As for their partnership with a sailing team in Team Alinghi, hey, at least both are involved with liquids in their respective professions? Visually, each individually detailed element of the watch comes to a cohesive package, but I wish it had more practical functionality than just telling the time in a hydro-mechanical way, although it’s an extremely ingenious mechanism. As HYT grows and creates new pieces, I’m hoping that they add complications to their watches in the near future to really bring value to the watch market. Nice looking watches are one thing, but nice looking watches with functional complications visualized through non-traditional mechanisms are exciting to see! Plus, a little disruption in the vast sea of “traditional” watches never capsized anyone…right? Limited to 20 pieces, the HYT Alinghi is priced at $65,000. hytwatches.com