Ikepod Thunderbird Chronograph: Quality Watch To Compliment A Not So Quality Car

Ikepod is the watch brand behind industrial designer genius Marc Newson (from Australia). Ikepod watches each have a monocoque cases which means that the entire movement and dial are inside one unified piece of metal (for the most part). The look is a hip looking bulbous orb that looks like a “time” capsule on the wrist. While by no means inexpensive, you get a true “designer” look with Ikepod watches, which stress form and function.

A few years ago when Ford re-released the Thunderbird, they commissioned Ikepod to create a limited edition series of watches for the release. Apparently Ford realized that the target audience for the attractive to look at, not so fun to drive coupe would be aging Americans who perhaps had fond memories of the originals. Likewise, this demographic might be into fine watches, so the connection seemed logical. Whatever Ford was thinking, the Ikepod Thunderbird watches do the T-Bird’s heritage justice. Very clean lines, inherently legible, with flamboyant colors that appear appropriate. You get lovely touches such as a nicely engraved “Thunderbird” logo across the top of the bezel, along with aquamarine cabochons in the pushers and crown that match the chronograph seconds hand. Of course, the iconic Thunderbird logo itself is proudly displayed on the face of the watch instead of the Ikepod logo for this special edition. 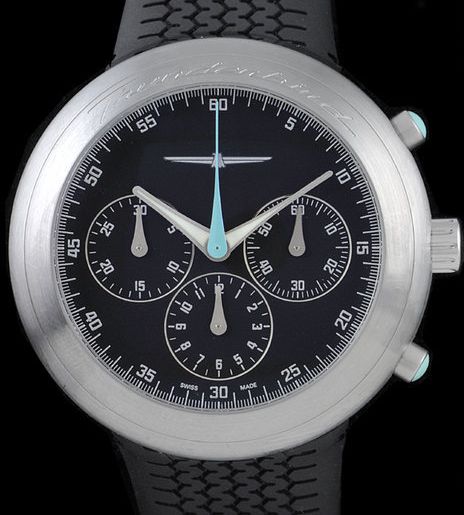 Inside, the watch has a Swiss automatic ETA 2892 in chronograph form. On the reserve side, the rotor is partially seen through a porthole. Case construction is always solid in these watches, and the size is admirable at 44mm. The attached rubber strap has an appropriate tire pattern (a la Chopard Mille Miglia), and happens to be “vanilla scented.” Why not new car smell?

One of these watches is available on eBay right now for about $1,800, which is a great deal considering it is one of only 200 in the world, and most other Ikepod watches on eBay go for well over $3,000. Although the Thunderbird is pure Ikepod, the styling of this model has some unique elements worth collecting. This might be the best thing to come out of the new Ford Thunderbird, more so than the retro coupe. While the car itself was not the driving sensation it could have been (actually I think the original was more of a looker than a roadster as well), its fine styling carried over well into this Ikepod watch special edition.