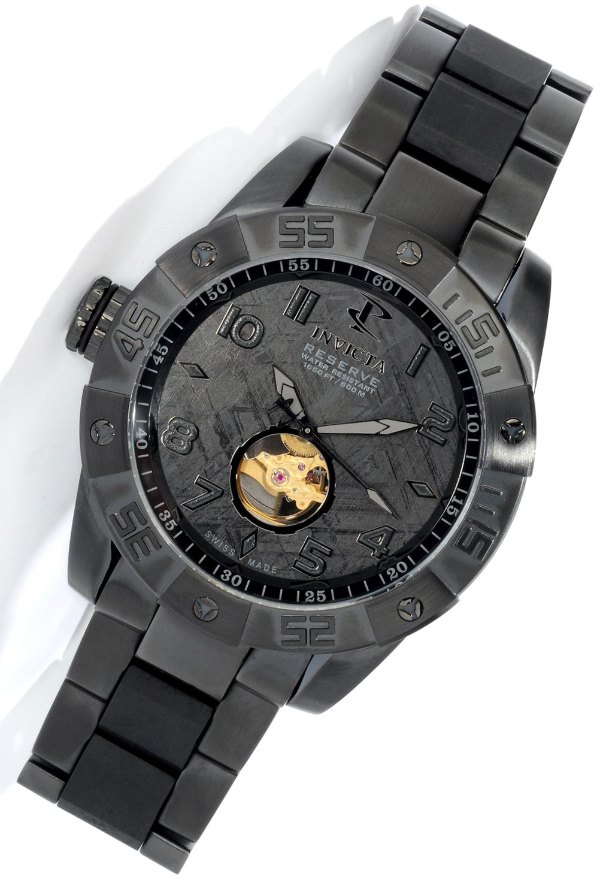 I love writing about Invicta watches because you readers get so worked up about them with your polarizing viewpoints. Some of you swear by Invicta carrying around your collection of 47 ‘ShopNBC specials’ in a duffel bag at all times, while other wouldn’t touch them with their worst enemy’s wrist. It is true that Invicta has a lot of hit and misses, as well as a broad range prices to go with their watches. Sometimes it is actually not fair, because you can’t compare a $1,000 Invicta with a $50 one – but they both have the same name on the dial, so what are you to do?

Here is one of their “Invicta Reserve” models which is supposed to be a higher-end piece with a Swiss movement and more interesting features. This one (model J401063) has a long name and some interesting qualities. This is the black on black version of the Invicta Reserve Men’s Pro Diver Swiss Automatic (let me take a breath) Lefty Meteorite Dial Bracelet Watch… with the “diver’s case.” What seems to be as a following of the smart move issued by Bathys several year ago, Invicta is offering many of their new pieces in Pelican style (not sure if they are actual Pelican like Bathys) cases. 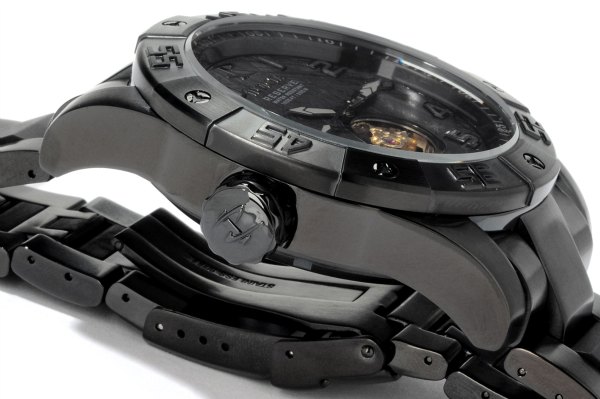 The Pro Diver Meteorite caught my eye because of its use of meteorite for the dial. I have a soft spot for meteorite dials. Just look at this watch and you’d think, “that isn’t too bad.” No it isn’t, but in true Invicta form the thing is frikkin’ massive. The (what I imagine is ion plated) black steel case is a whopping 55mm wide and 17mm thick. Invitca calls this “sturdy and masculine.” I wonder if it might stop a bullet. The bracelet links alone are 26mm wide! Though it tapers a bit to 24mm thick near the clasp. Use your best Paul Hogan accent, but on a bush Fedora and say “That ain’t a watch. This here’s a watch!”The case is also water resistant to 500 meters. They use a “Flame Fusion” crystal which is a mineral crystal with sapphire crystal “fused” to the top of it via heat. It is a less expensive way to get close to sapphire crystal scratch resistance for less money – and apparently people love saying the term “flame fusion.”

While this version is all black, I think a few others are available as well. The dial is black stained meteorite with applied Arabic hour markers and is pretty decent looking. Invicta could have made the hands a bit longer though. The dial has an opening for the escapement of the movement, which in this case is a Swiss Sellita SW200 (similar to the ETA 2824). Because the watch is so large, the crown is on the left side of the case. This isn’t just for lefties, but it also to protect from having the crown jab into your hand (which is gonna happen with a watch this size). Looks like the bezel is fixed and does not rotate. 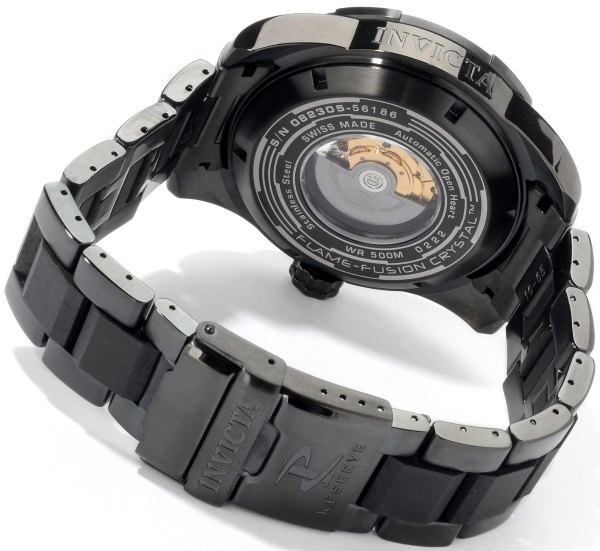 All in all, this is an interesting Invicta watches for people who want something really large. At 45mm wide this watch would have been just fine. In a silly and sort of absurd way, Invitca watches can be fun. They certainly are walking (or worn) statements, and have a lot of personality to them. Quality won’t hold up to the best stuff from Switzerland, but they are a lot cheaper. The final point of amusement in the Invicta Reserve Pro Diver is the pricing. Typical of the wildcard pricing schemes ShopNBC is often laughed at for, this watch has a “retail value” (a silly term that means nothing) of $1,575, a “Regular Price” of $604, and a sale price of $548.19! Wow, I didn’t even need to negotiate and I think I just saved a bunch of money, lol. Learn more about this Invicta watch or get one here.