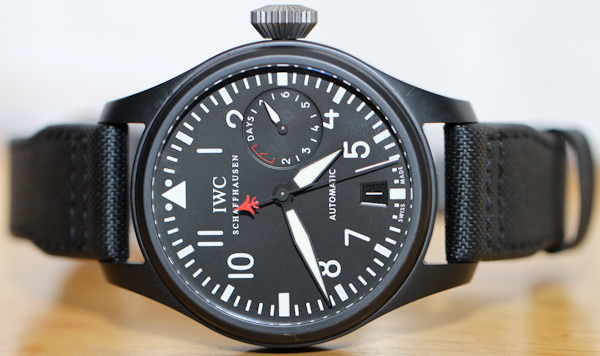 IWC fanboys (of which there are many) have a serious love affair with the Big Pilot watch family – and it is easy to see why with its large masculine looks and action-ready stance. For review I have checked out one of the new Big Pilot pieces that comes in an all ceramic case and is part of the Top Gun collection. The technical name of the watch is a bit grammatically and semantically confusing in English being the “Big Pilot’s Watch Top Gun.” If you’ll excuse me I will be referring to it by the more comfortable sounding “IWC Big Pilot Top Gun watch.” While it is a large timepiece, I don’t think this is a watch exclusively for “big pilots.”

The Big Pilot watch is one of IWC’s staple, namely the reference 5009 which comes in a steel case and is a tad bit smaller at 46mm wide. For 2012 IWC released the reference 5019 (IW501901) Big Pilot as part of the Top Gun collection of watches. This 5019 version is a bit larger at 48mm wide, which as far as I can tell is due to the case itself being a bit broader on the sides. The dials of the two watches are very similar. One thing that a lot of fans like is the new ceramic case for the Big Pilot – which was previously more or less seen in the chronograph versions. The color is not quite black, but closer to a dark gray and offered in a matte finish. It is rather handsome in a military sort of way – and the black look of the case goes well with the dial. 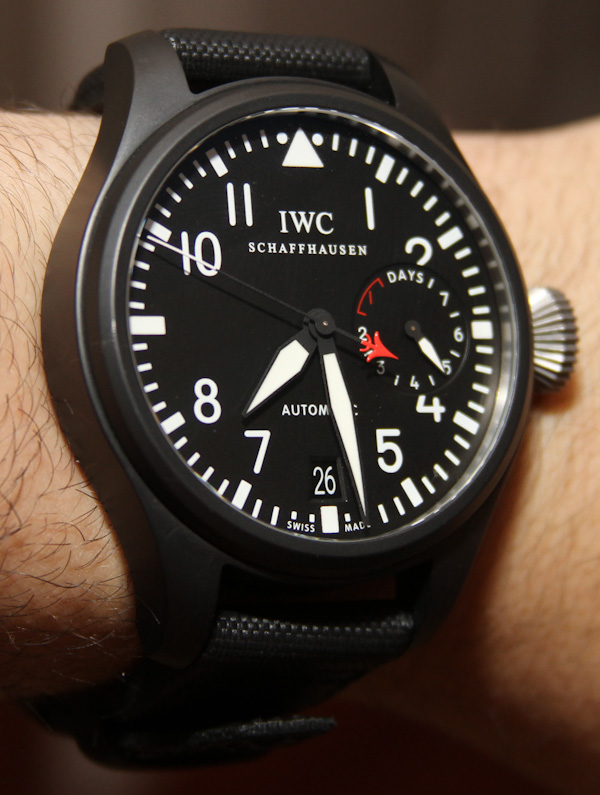 Given the current limitations in machining ceramic cases it looks a bit more simple than a steel case (especially because polished metal cases often have more than one finishing). The case is also not entirely ceramic with the crown and caseback being in titanium. This again has to do with the realities of machining ceramic which is not as precise as metal and more tricky. The large titanium crown is very nicely cut and the detailing is impressive. Some people have complained that the crown should be the same color as the case. I think that would have been nice as well, but the titanium crown color doesn’t personally bother me. What I can say is that the crown is large and can stick into your wrist. As I mentioned in the review video this is a problem that I rarely have given where watches like to sit on my wrist, but given the size of the case and crown it does sometimes stick into my wrist – though nothing too bad or too often.

At 48mm wide in size with pronounced lugs this watch is probably a bit too large for my wrists. That is because the lugs tend to jut out a bit past the edges of my wrist. I still like to wear it, but I am aware that on my smaller wrists this watch looks a touch too large. If you are sensitive about that type of thing then try before you buy with a Big Pilot to see how it looks on you. The ceramic case is soft to the touch and feels to be a bit lighter than steel – or maybe that is just psychological. For some reason when I pick up the watch I expect it to heavier than it appears. As a daily wear the Big Pilot Top Gun performs admirably in terms of comfort and fitting in with a lot of different types of attire. I wore it with a black and white suit and it looks good actually given the main colors of the dial and case. 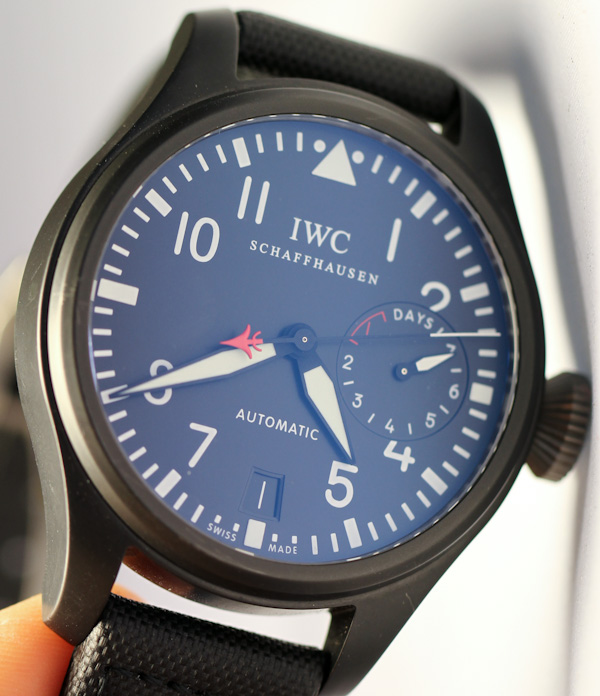 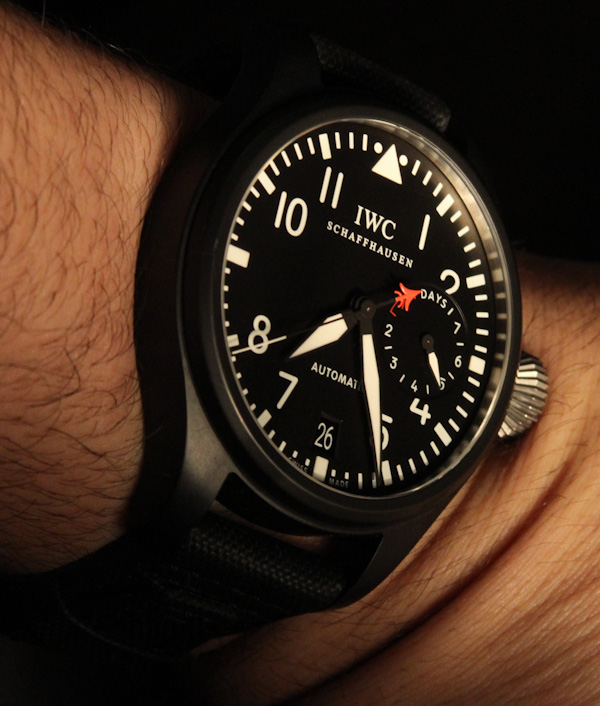 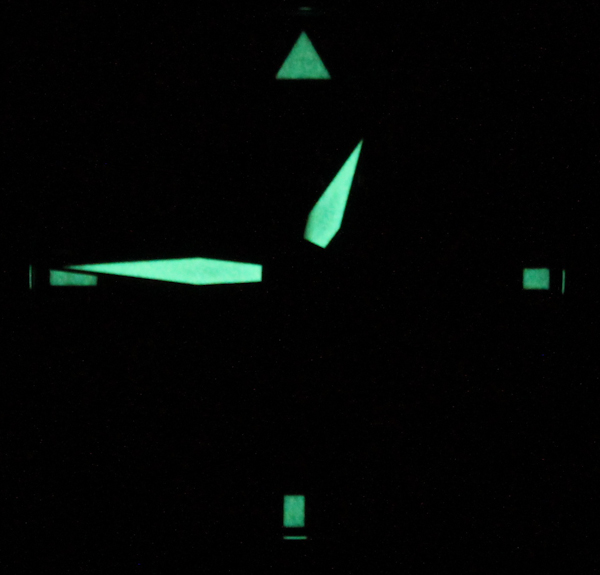 Discussing the Top Gun connection is touchy. First of all, some fans love the Top Gun branding, and some really don’t care for it. The logo on the rear of the watch is actually from the 1980s Top Gun movie, and not the logo of the Top Gun pilot training school (now located in Nevada and not near San Diego). IWC retained rights to the Hollywood logo for use on its Top Gun watches. A little while ago IWC and Breitling got into an amusing little face-off where they both had Top Gun watches – each claiming to have “the real Top Gun timepieces.” To be honest I am not sure who holds what rights and whose pieces are more legitimate (not sure that it really matters to me either). What I know is that each of them has an actual relationship with the Navy’s Top Gun school – which I confirmed by speaking to people who administer and are students of the Top Gun program. What does this all mean then? It means that there is a Top Gun branding on the watch which is pretty cool if you like it and easy to ignore if you don’t. I wouldn’t let the Top Gun relationship affect your purchasing decision in any way – especially since there is no such branding on the dial of the IWC ref. 5019 watch itself.

Pilot watches grew on me over the last couple of years. I have always been such an avid dive watch fan, that I paid less attention to pilot watches. Having experienced more of them and speaking to impassioned actual pilots who love watches, I have become a lot more interested in the breed. Like dive watches, pilot watches come in a range of styles and forms. Ones like the Big Pilot are meant to be inspired by airplane cockpit instruments. Plus, IWC does have a real history in making watches for aviators. Classic pilot watches were really large – so this piece fits that tradition. They were also meant to be really easy to read. Again, another thing the IWC Big Pilot excels at. If you have problematic vision, the Big Pilot offers a very clear dial with high contrast hands and hour markers for really fantastic legibility. 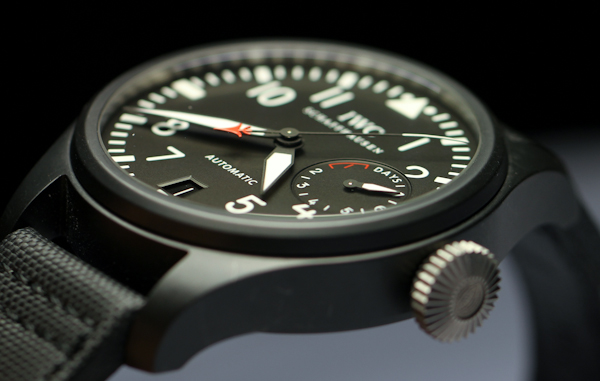 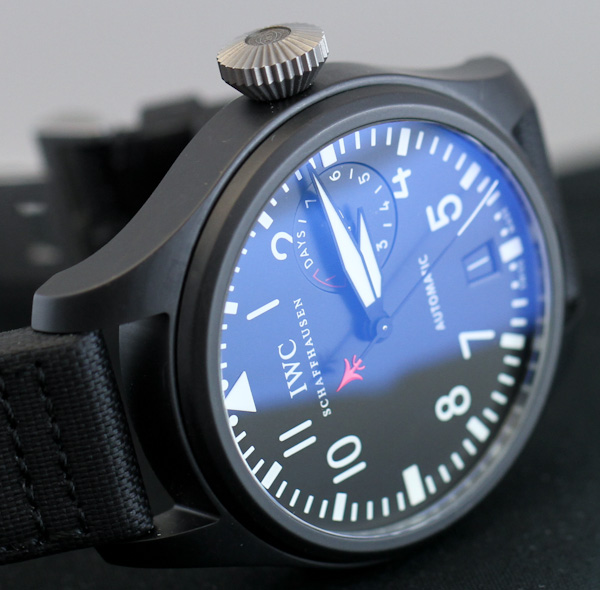 It also helps that IWC produces some of the best functioning watch hands on the market. While the hands are technically black on a black dial, a different of tone and texture prevent them from blending in with the dial – something a lot of other pilot watch brands fail at. That and the hands are all the right size (something you know I love). One dial difference on the Top Gun version of the Big Pilot is the counterweight on the seconds hand which is a little red plane. A fun and appreciated detail. In terms of lume, the hands are slathered in it, but only hour markers at 12, 3, 6, and 9 o’clock have applied lume. I would have liked lume on everything if I had my way.

Also on the dial is a nicely placed date window at 6 o’clock as well as a power reserve indicator in a slightly recessed window. Fans of the brand know the famous IWC made caliber 51111 automatic movement and its week long power reserve that is inside of the Big Pilot Top Gun watch. Actually, the power reserve is longer at 8.5 days long. However, IWC shuts the movement down after running for 7 days due to the low torque of the last remaining 36 hours or so. This low torque would slow down the movement and have the accuracy be way off. This is an issue with long power reserve watches, and I think that seven days of power reserve is more than enough. Having automatic winding and the indicator on the dial makes the caliber 51111 really convenient to own. 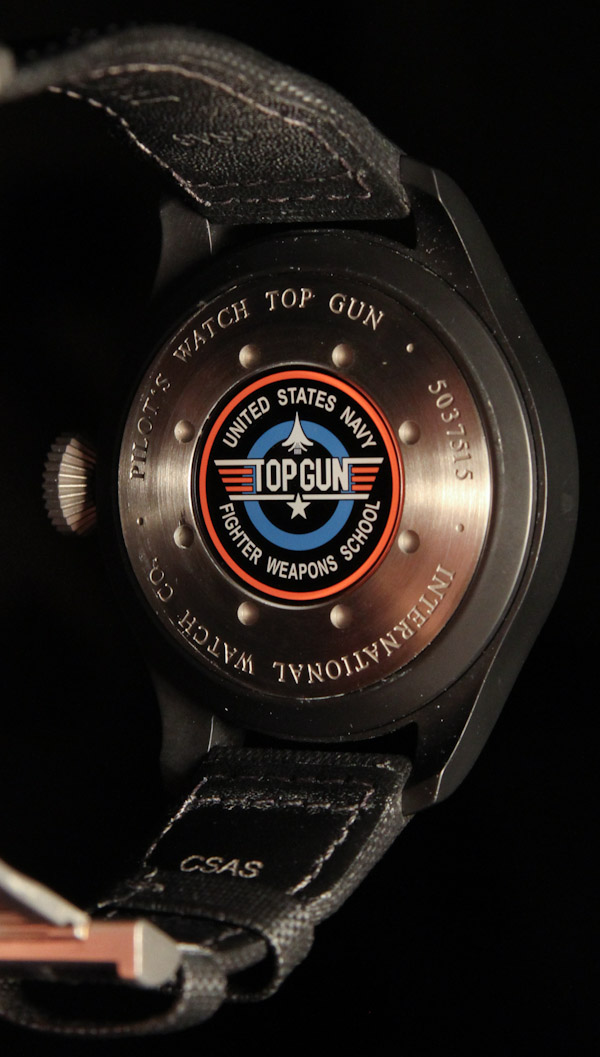 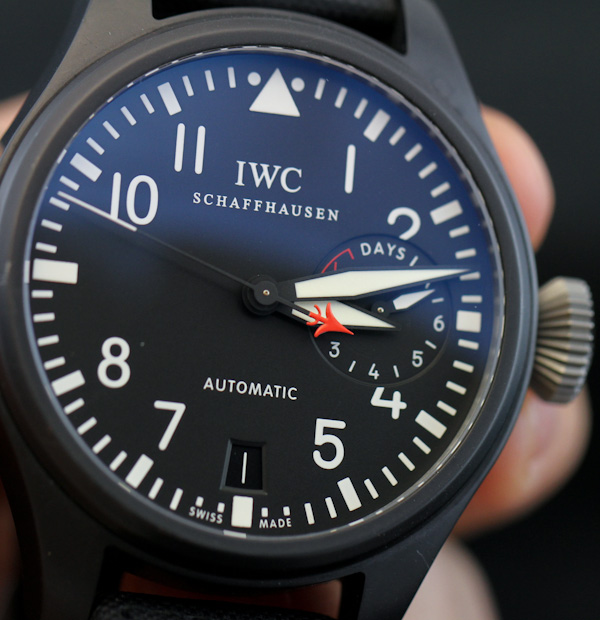 The calibre 51111 also features IWC”s Pellaton winding system for the automatic rotor. It is said to be a bit more durable than other automatic winding systems, and it also winds when the rotor moves in both directions. Plus, the Pellaton system uses a unique heart-shaped cam in the gear train which is interesting. Functionally I think it is cool that the Pellaton system is there, but for practical purposes most casual watch lovers won’t understand or appreciate the differences from other winding systems. Speaking of which, IWC is actually pretty good at speaking to the right customer at the right time. If you look at their marketing as well as their products, they know when to tech talk it up with gear heads, or to just show cool timepieces and not go overboard which technical details when speaking to more casual timepiece fans.

One thing that people notice about the dial of the Big Pilot is that the seconds hand visibly ticks quickly rather than moves more smoothly like some other automatic watch seconds hands. Actually all mechanical watch hands tick rapidly versus moving absolutely smoothly. Only something like the “glide hands” on Seiko’s Spring Dive watches will glide without stopping in one direction. What people are seeing on the dial of this watch is two things. First, the length of the seconds hand makes the movement of it more noticeable. On smaller dials it would be harder to see. Second, the calibre 51111 operates as a slower 3Hz (21,600 bph) versus 4 Hz. This has to do with maintaining the length of the power reserve and is like more vintage watches. While operating speeds of mechanical watches do affect accuracy, it is not untrue that a slower operating movement cannot be just as accurate when regulated properly. Therefore, the 3 Hz beat speed of the movement has the seconds hand “ticks” a bit less rapidly compared to 4 Hz (or faster) automatic watches. My last comment about the movement is that when hand-winding it, you generate a lot of power and don’t have to twist, twist, twist forever to fully wind up the mainspring barrel. 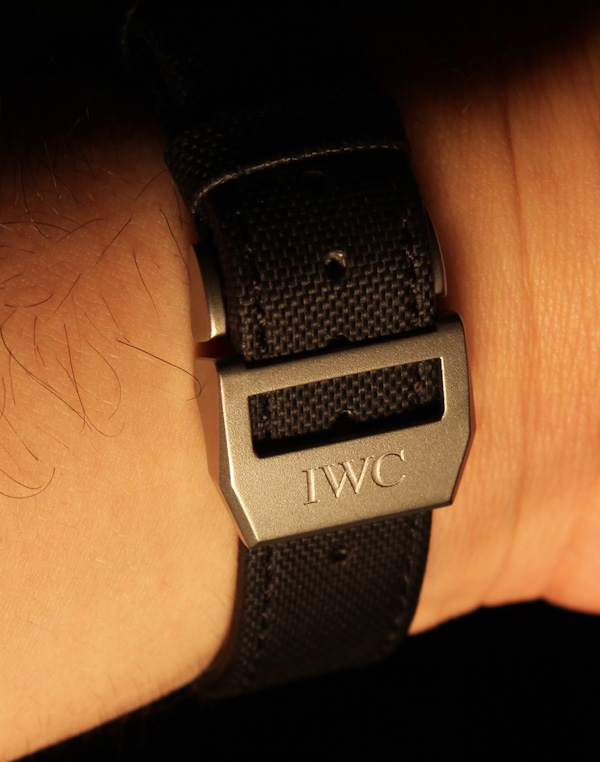 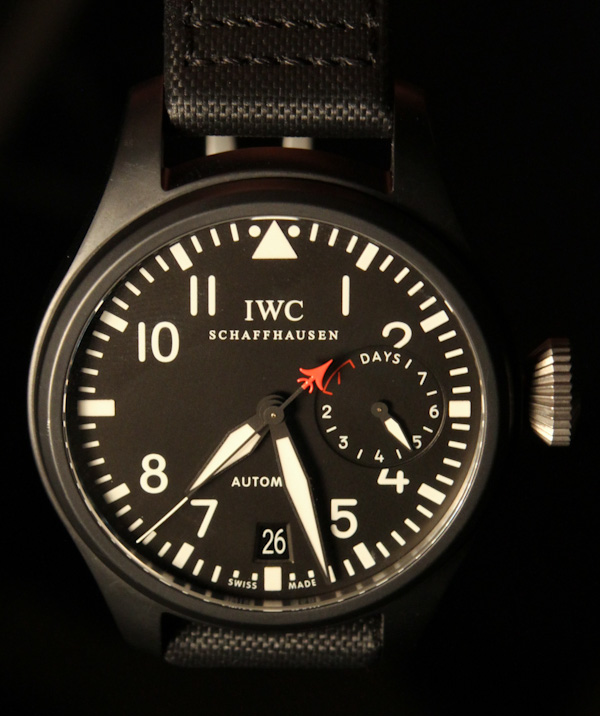 The IWC Big Pilot Top Gun watch is water resistant to 60 meters and has a large AR coated sapphire crystal over the dial – that is slightly domed. Attached to the case is a black textile strap with a folding, tension locking deployant in titanium that looks really nice. I like that the excess strap is placed on the inside of your wrist. The strap is pretty nice, but I would also like to see the watch on the more traditional Big Pilot strap with the “aviator rivets.” Overall the Top Gun version is a handsome and sizable addition to the Big Pilot family. There is nothing evolutionarily new about the watch as the movement is an existing part of the IWC collection, but it’s a great new flavor of a Big Pilot for those who wanted a larger black ceramic version – and it is still handsome as hell.

While the IWC Big Pilot Top Gun Ref IW501901 is a solid pick for a daily wear, it is very expensive. The ref 5009 in steel is pricy at a retail price of $15,400. The price jumps up to $18,200 for the 5019 in ceramic. That is arguably a hefty sum for this type of watch, but given IWC’s recent success in both North America and elsewhere, I have a feeling they can get away with it. At least you know that a decade or so from now the watch will still look good on your wrist (and you’ll still be able to read it just fine).