Modifying brand classics without drawing the ire of followers is not an easy task. But when a watch collection, like the IWC Schaffhausen Big Pilot’s range, has usability at its core, providing an option that does nothing to detract from the original’s recognizable appearance — but instead extends the relevance of the collection to a new demographic — little can be said against it. The IWC Big Pilot’s Watch Edition Right-Hander is the first of its family to feature a left-hand crown. This not only enables the watch to be worn on the right wrist without sacrificing access to the crown but also allows right-handed wearers who prefer to keep the crown away from their wrist the same kind of option that the positively received Tudor Pelagos LHD did upon release.

While both demographics are small segments of the industry, it makes sense for brands to pay attention to their needs. A watch purchase at this level is a very personal choice, and so giving potential buyers such an option is a wise move (even if this model would not be expected to become the best-selling piece in the range).

The IWC Big Pilot’s Watch Edition Right-Hander is inspired by the Big Pilot’s Watch Caliber 52 TSC, which originated in the 1940s. The hefty stainless steel case measures a daunting 46.2mm, maximizing legibility. Taking its cues from traditional cockpit instruments, this piece was conceived to make life for left-handed pilots (or lovers of aviation-themed watches) easier.

Anomalously, an estimated 40% of pilots are left-handed (way above the general population average, which stands at around 10%). With such an odd statistic in play, this release is, if anything, more overdue than it is overthought. Powered by the in-house caliber 52010, the IWC Big Pilot’s Watch Edition Right-Hander (ref. IW501012) protects its movement with a soft-iron inner case, designed to shield the movement from the effects of magnetic fields. Additionally, this automatic movement is fitted with ceramic components to further lessen the impact of potentially disruptive magnetic influences. Twin barrels provide this movement with a very generous seven-day power reserve, which is a huge boon (and effectively makes use of the plentiful real estate afforded by that 46mm+ case).

Aside from reliability, the prime focus when designing pilot watches is readability. A dark slate-colored dial is printed with high-contrast white indices and decorated with red flashes. A power-reserve indicator at 9 o’clock and a going seconds sub-dial at 3 o’clock give this time-and-date-only watch the appearance of a chronograph, at first glance, but keep things simple. The 6 o’clock date adds welcome functionality and sits comfortably on a display that uses the available space to great effect. Luminous hands and markers ensure this watch remains useable at night or in low-light/poor visibility conditions.

The IWC Big Pilot’s Watch Edition Right-Hander will be limited to just 250 pieces and available from both IWC boutiques and official retailers starting this month. Interestingly, the watch will debut first in Australia and France with three months exclusivity before it is rolled out across the whole sales network around November. Limiting a watch of this nature to such a small run will, no doubt, result in fast sales, as both left-handed users and right-handed collectors clamor for something timeless yet different. The price of the IWC Big Pilot’s Watch Edition Right-Hander will be $14,200. Learn more about IWC and the brand’s aviation history at iwc.com. 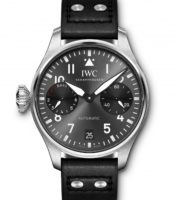 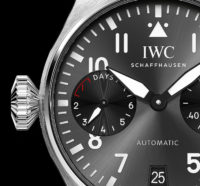