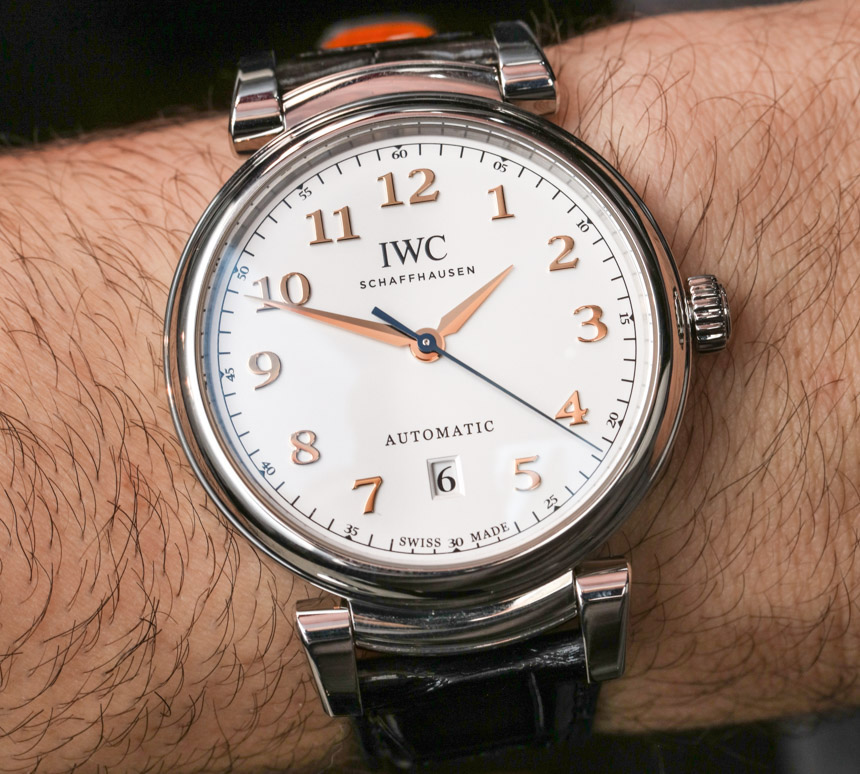 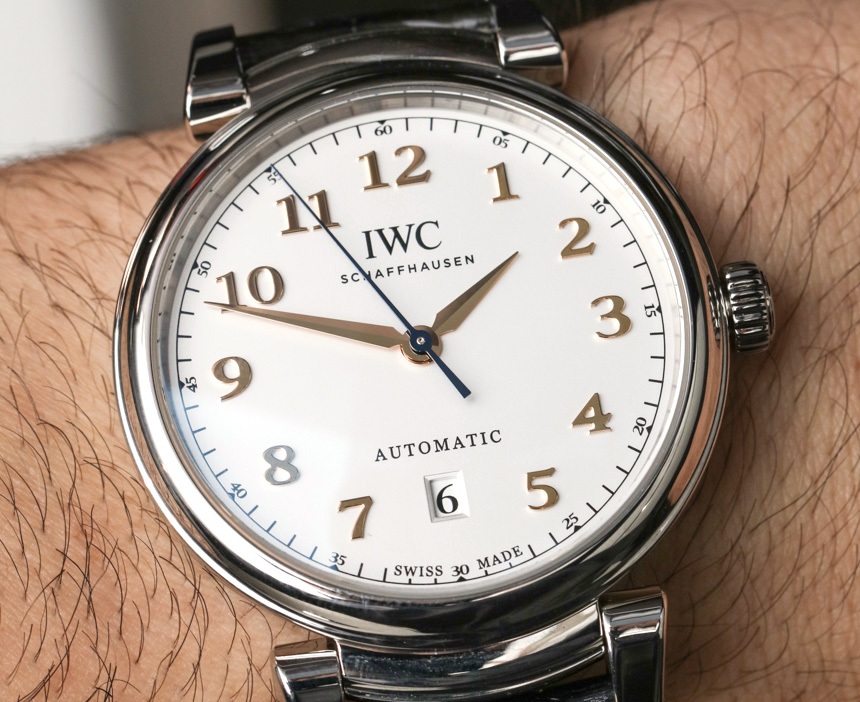 In recent years, IWC has followed the tradition of choosing one of their collections for a complete refresh which they announce at SIHH. Last year, we saw a diverse new set of Pilot’s watches added to the IWC catalog, but 2017 is all about the complete overhaul of their Da Vinci collection. We brought you news of the IWC Da Vinci Automatic watch not long ago and, when compared to something like the IWC Da Vinci Perpetual Calendar Chronograph, with its revamped circular case, it really shows you the range of changes coming into the lineup. With the basic automatic model, though, IWC is attempting to capture the spirit of the earlier 1980s Da Vinci timepieces while presenting a watch that is designed for and marketed to both men and women. Simplicity is also key when you set that kind of universal goal, and the new IWC Da Vinci Automatic models offer enough diversity in the way of strap and dial combinations to appeal to a range of watch lovers. 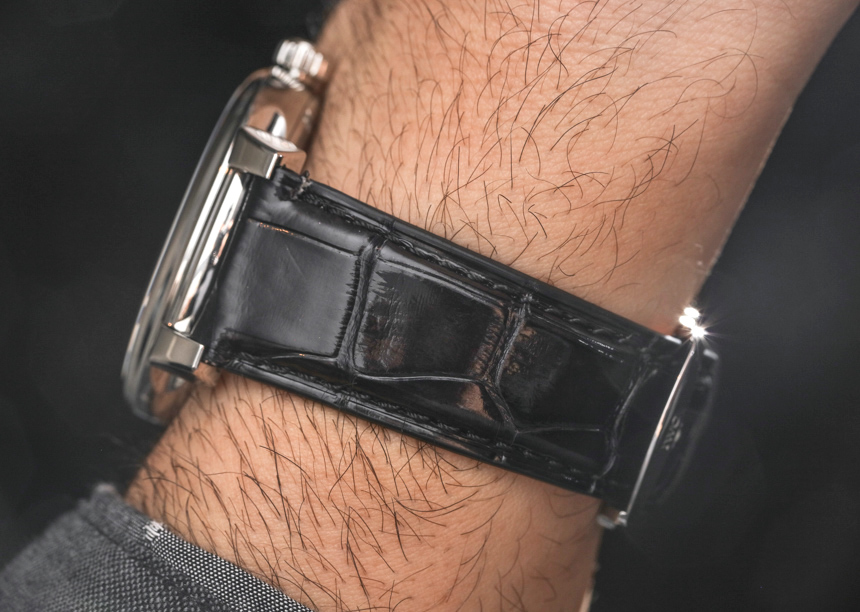 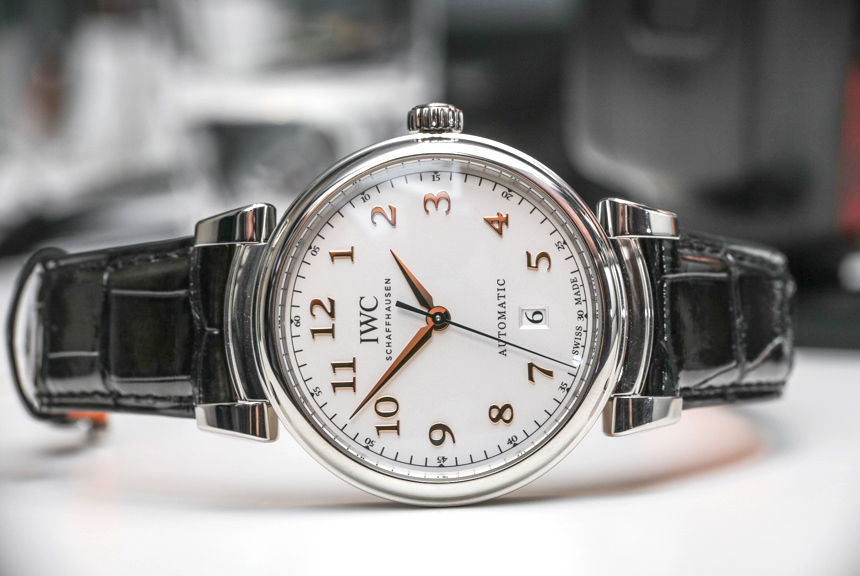 The IWC Da Vinci Automatic is sized at 40mm, which by modern standards can often be considered a unisex size. It’s slim at 10mm thick and the proportions are ideal for a watch that’s meant for both men and women (note that this year also saw the release of the 36mm-wide IWC Da Vinci Automatic 36 that is specifically for women). I, for one, don’t have much of an issue with a 40mm case and find these measurements to exist somewhere within the sweet spot in terms of comfort and versatility. It’s good to see IWC push women’s watches that aren’t exactly dainty or explicitly feminine as well. They made a similar move last year with the IWC Pilot’s Watch Automatic 36 which, funny enough, was the same size as the original Mark XI. But hey, either way, I’m not one to complain about more women wearing IWCs and the brand has certainly grown in their consideration of the female demographic and how they market to them. 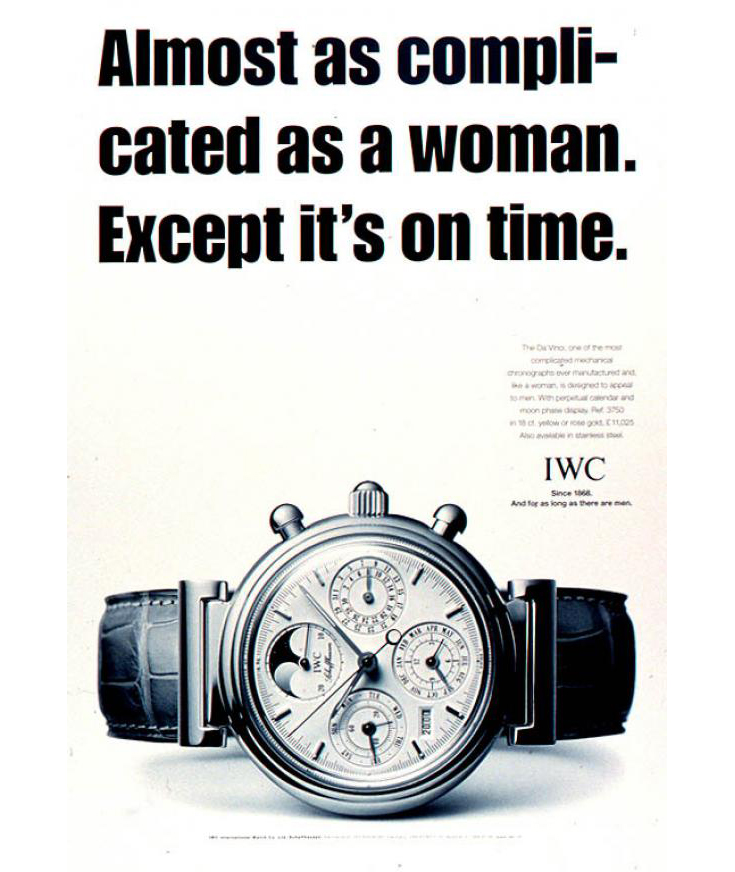 I did want to include the image of the advertisement for a previous Da Vinci line here just because it’s interesting and hilarious to see just how dated it looks. It’s like a drunk uncle at Thanksgiving. Anyway, just wanted to share that little bit of irony since IWC is marketing more to women than ever this year. Back to the watch… 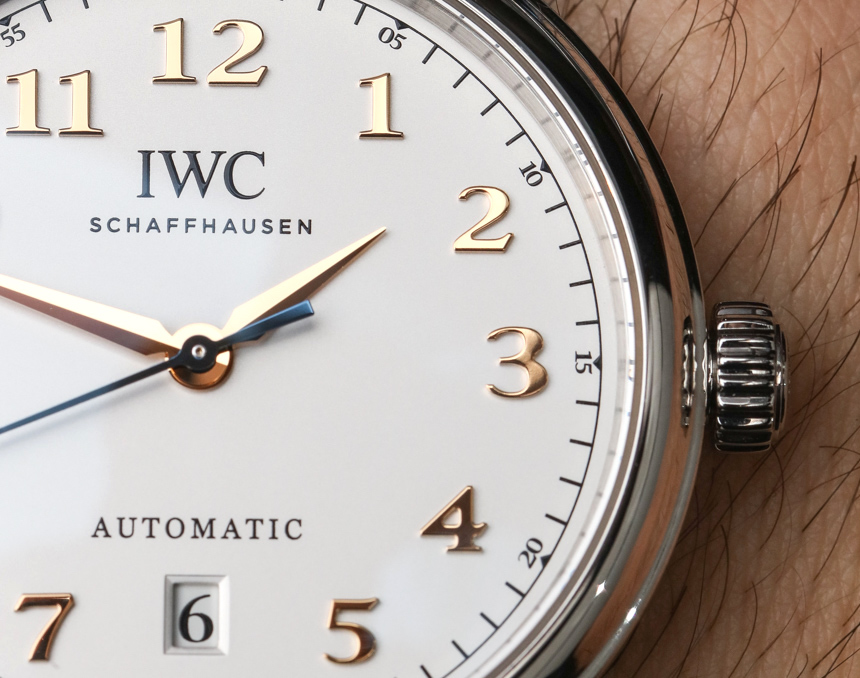 The dial is simple, which can mean elegant for some or boring for others. With a time-only layout and unobtrusive date placement at 6 o’clock sitting within a well-contrasted seconds track. Both the silver-plated and slate dial finishes serve as nice backdrops for the polished Arabic numerals and the lancet-shaped hands, which are both color-matched for their respective dials. One thing you’ll notice is that the twin frame bezel is actually quite pronounced, and its combination with the convex sapphire crystal results in a compact, vintage-inspired look.

A noticeable feature is the set of horn lugs which are hinged and meant to adjust to the wrist’s contours for a closer fit. It’s a great addition for smaller wrists and a design touch that recalls some of the earlier watches in the Da Vinci collection like the Da Vinci SL Automatic Ref. 3528. 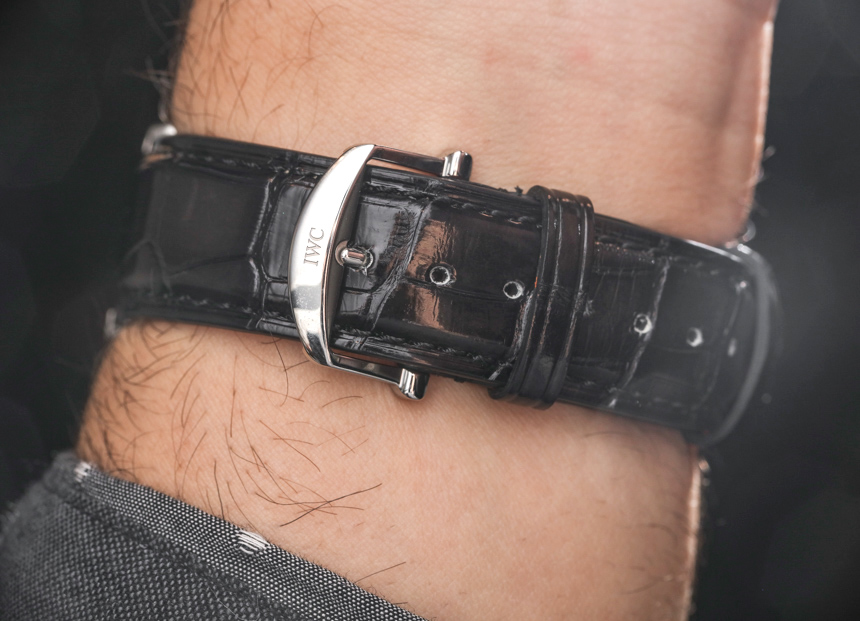 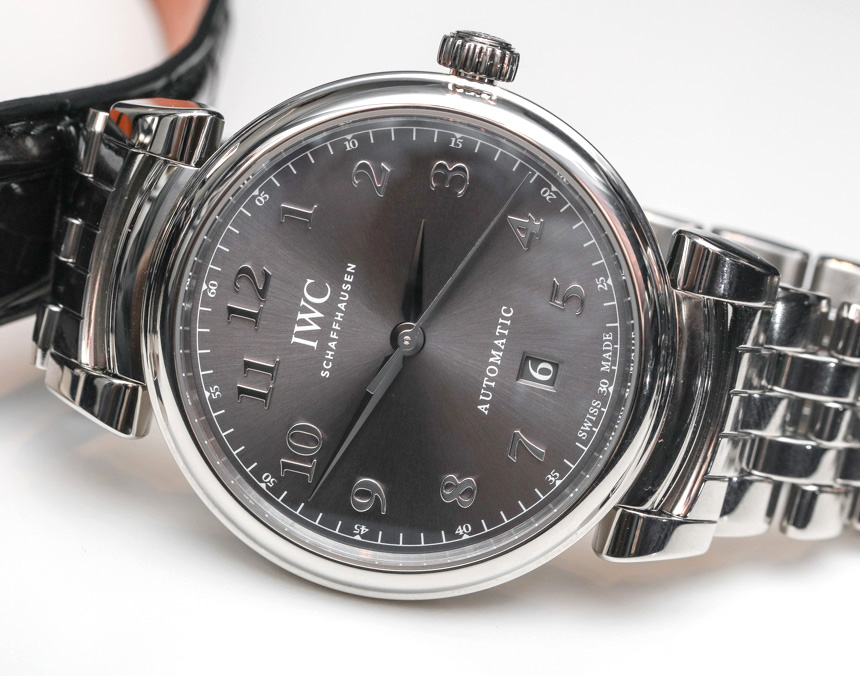 We’ve seen IWC do some amazing work with Santoni and naturally, the silver dial Ref. IW356601 comes with a Santoni alligator leather strap fitted with a stainless steel pin buckle. It’s a logical pairing, though you can’t help but love the slightly more aggressive styling of the Ref. IW356602 with its polished stainless steel bracelet meant to match the slate dial. Either of the configurations provides a pleasant wearing experience, and it will be interesting to see how much after-sales support IWC will provide in the way of compatible strap options. 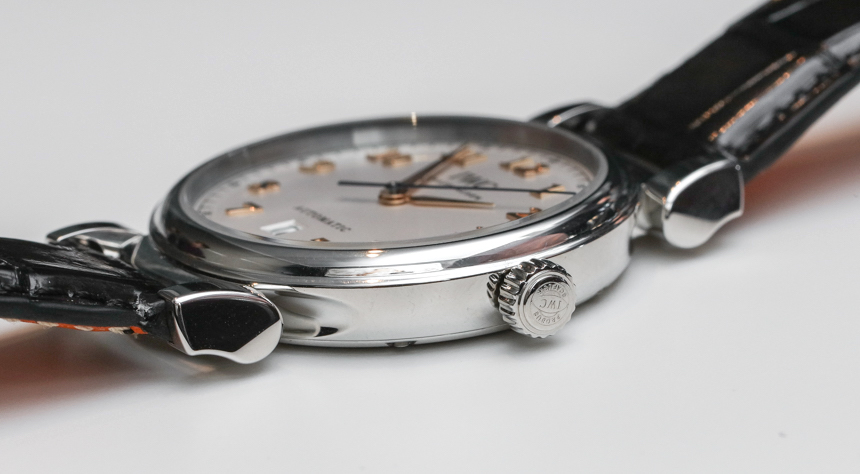 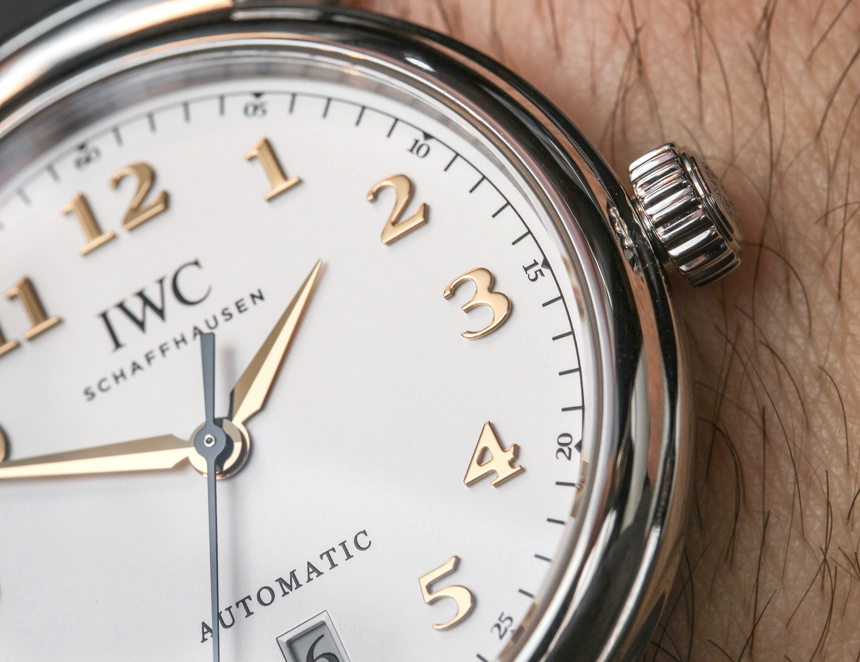 The movement powering the IWC Da Vinci Automatic is the caliber 35111. This is an IWC modified Selita SW300-1 that operates at 28,800A/h (4Hz) and features 42 hours of power reserve. It’s a robust choice for a movement that’s truly serviceable with a reliable track record. Solid, inoffensive, and reliable, the movement is basically like the watch itself. 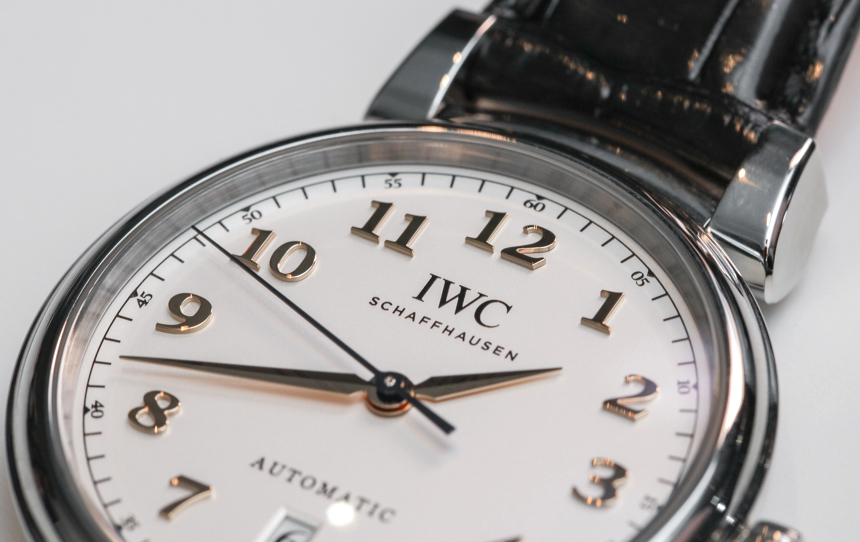 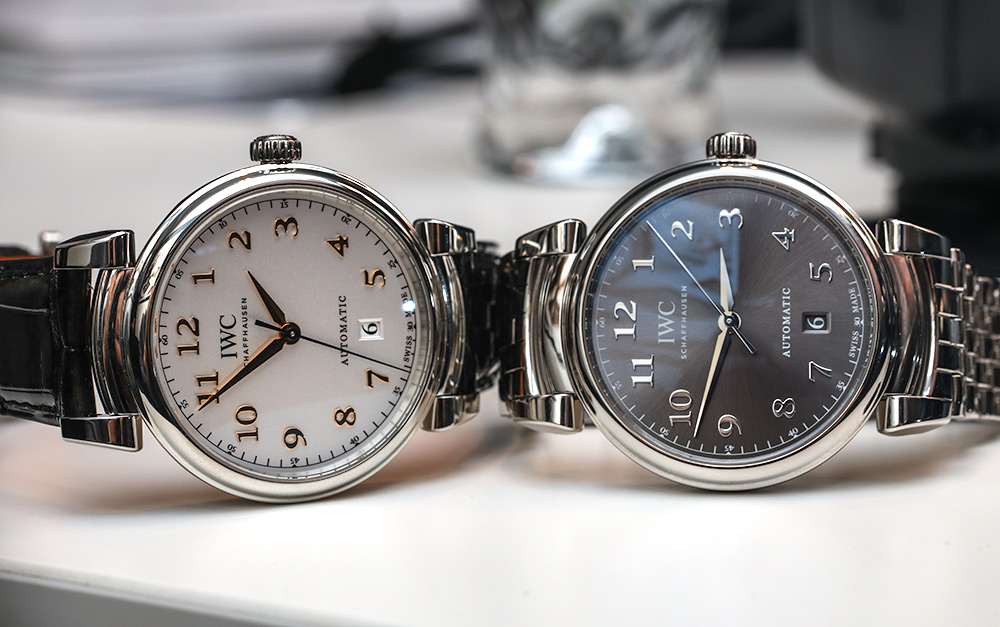 No, it’s not the biggest release of SIHH. It’s not a million-dollar split-second chronograph or a profound, highly complicated look into the cosmos either. The IWC Da Vinci Automatic watch is a timepiece that stays true to tradition and offers a no-frills look into the brand’s past along with their hopes for the future. What IWC brings to the table here is an appealing choice for both men and women, and it’ll be interesting to see if its versatility can dictate a truly universal experience for anyone that finds it intriguing enough to pick up. The IWC Da Vinci Automatic can be had for a price of $5,400 on leather with a silver-plated dial or $6,400 on a bracelet with slate colored dial. iwc.com