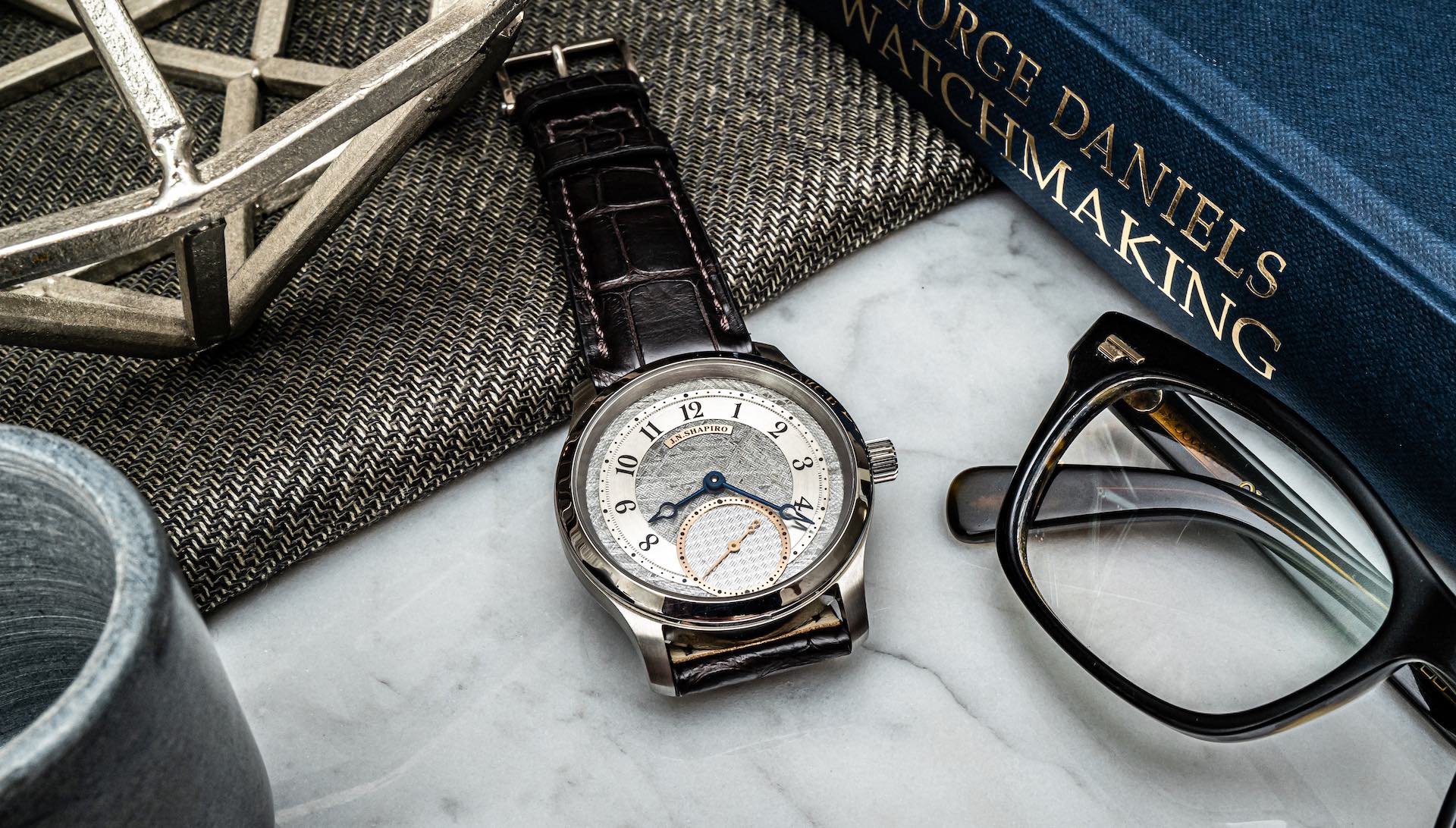 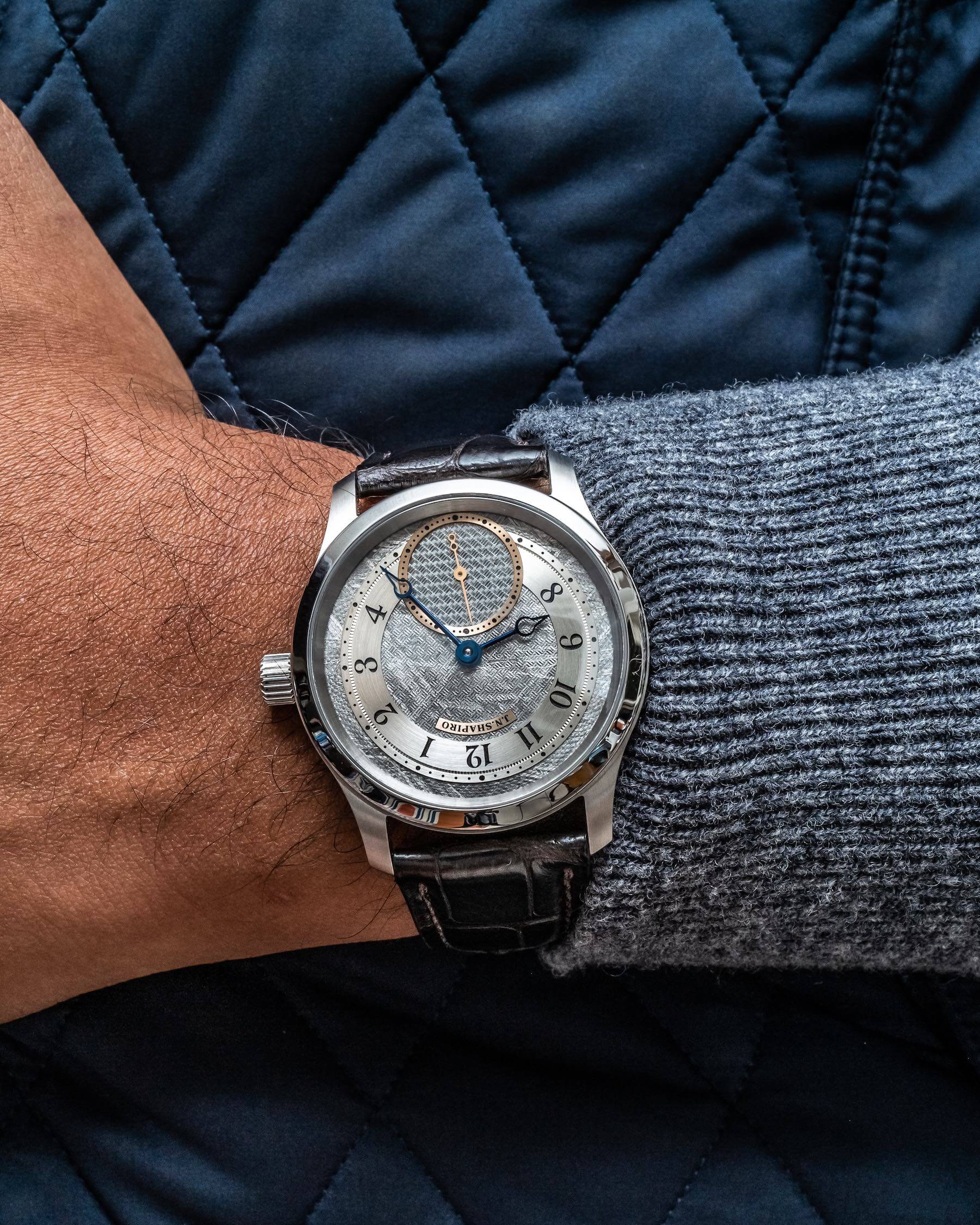 I’ve said it before, and I’ll say it again: Josh Shapiro is making some of the most impressive watch dials out there. I have visited Shapiro’s old workshop (I believe he just relocated recently) in Los Angeles, and I would encourage anyone not familiar with his work to take a look in order to better understand what J.N. Shapiro is all about. Earlier this year, we covered the release of the J.N. Shapiro Infinity Series P.01 that was released in collaboration with San Francisco-based Collective. I recently got to spend some time with it in the metal (or rather, in the meteorite), and knew I needed to share my hands-on impressions of such a remarkable watch. 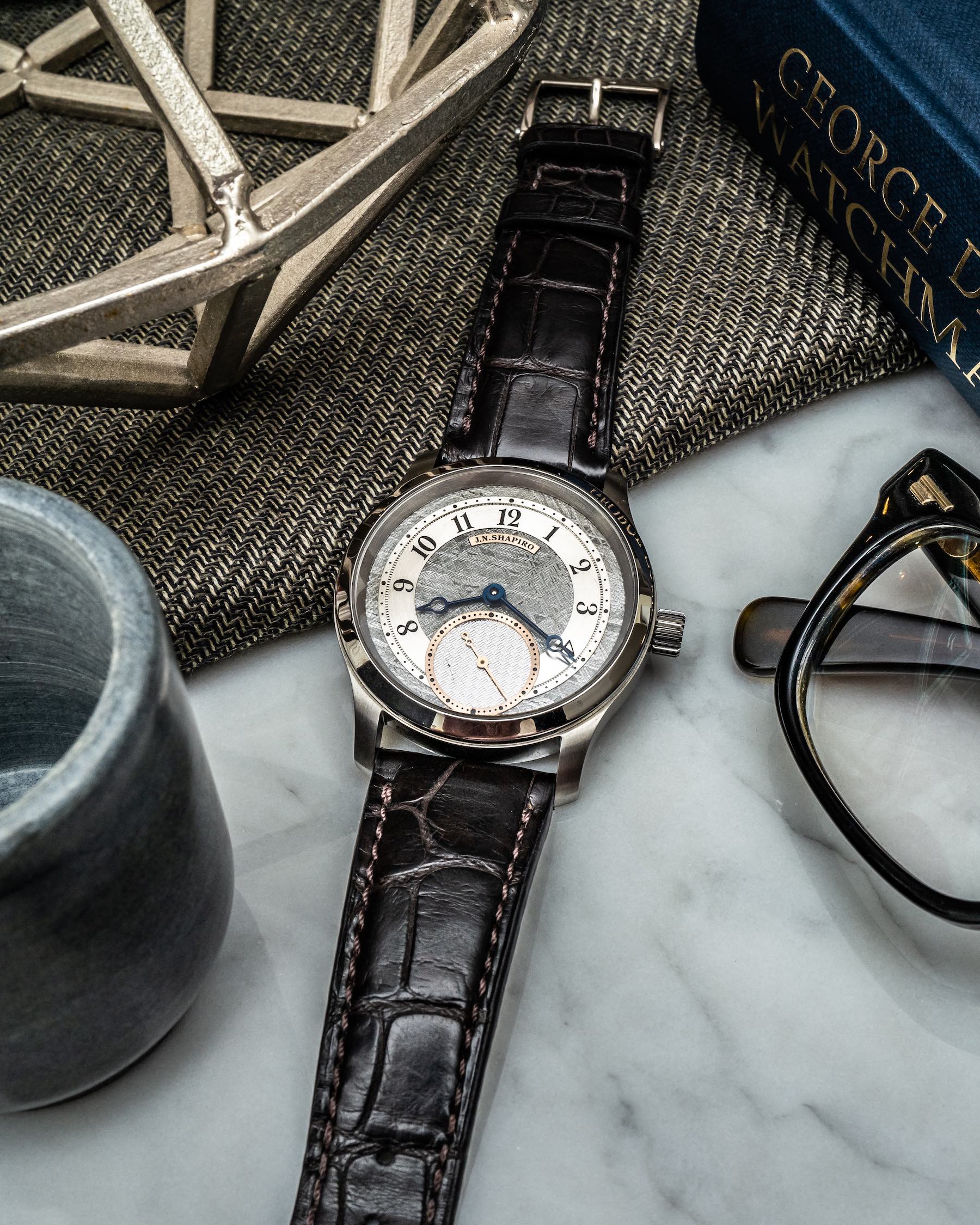 With the Infinity Series P.01, Shapiro’s canvas is a piece of four-billion-year-old Gibeon resulting in a piece that is nothing short of spectacular and a real joy to behold. I know praise is often subjective, but having seen so many (oftentimes exponentially costlier) watches over the years, I have to attest that the dial Shapiro achieves here is something truly special. I’m not impressed by “firsts” just because they’re first, but engine-turning a meteorite dial? That’s just baller. 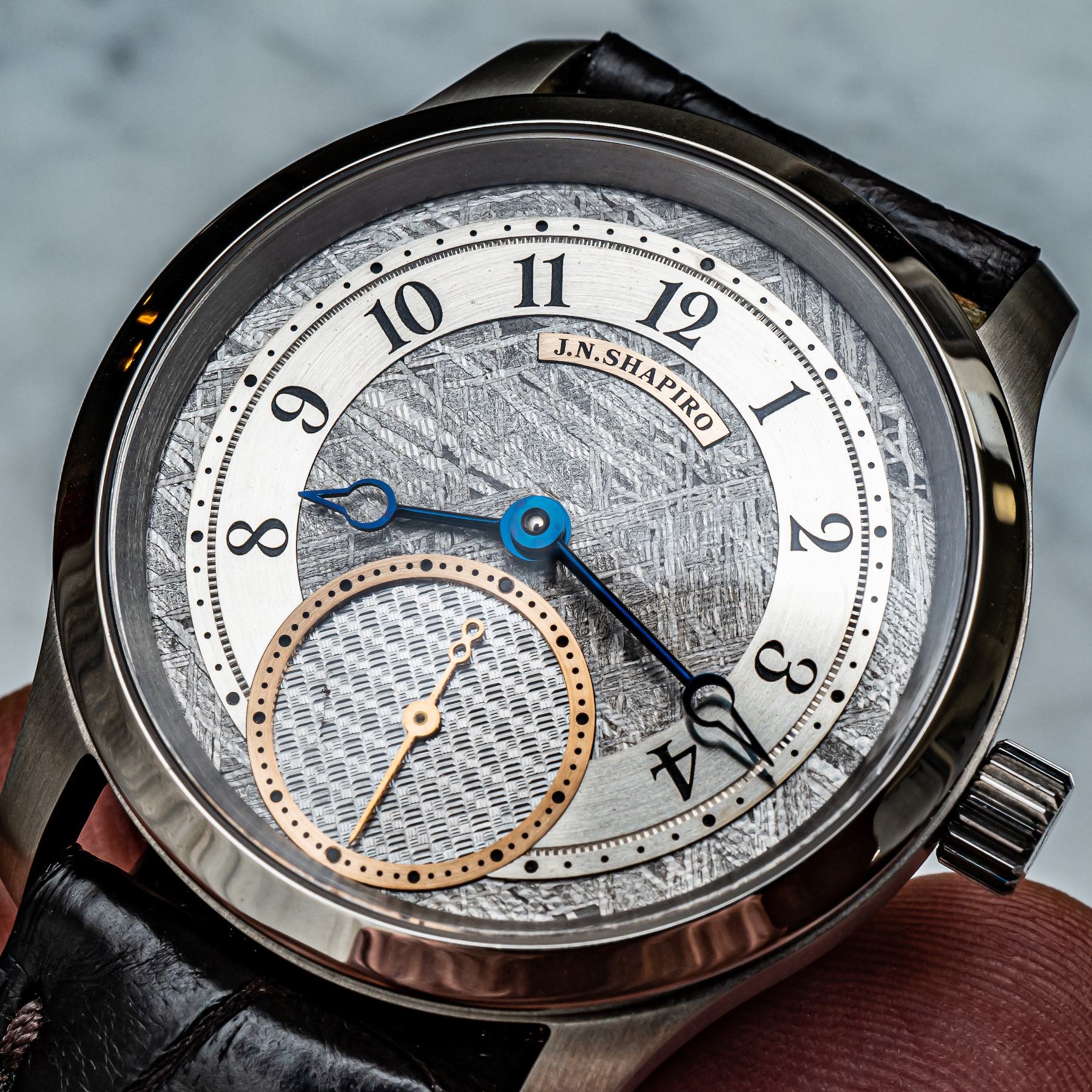 Of course, working with meteorite comes with its fair share of challenges, and uncertainty appears to be at the top of the list. On this topic, I decided to ask the man himself about the challenges he encountered in creating the Infinity Series P.01:

With meteorite, you are never quite sure what you are going to get when you engrave. One of the challenges when selecting a piece of meteorite is to avoid slices with large cracks or actual rock embedded in the meteorite. I use Gibeon meteorite, which is made up of iron and nickel. The iron engraves very smoothly, but nickel can be quite hard. Rock will not engrave at all and must be completely absent. I would need diamond tooling to successfully engine-turn rock. Gibeon also does not rust because of the nickel content. Most high-end meteorite watches you see are Gibeon. Cheaper meteorites are 100% iron and will rust over time.

The natural weaving Widmanstätten patterns that form on the Gibeon iron and nickel meteorite make for an organically blunt medium for Shapiro. The outermost ring frames the dial, showing off the meteorite without the engine-turning. This natural pattern on the meteorite is so clear and defined because of an acid etching process that removes the surface molecules on the meteorite and involves a bit of trial and error. On the main central part of the dial, the pattern is still very visible but closer inspection reveals the engine-turned work. When asked about this process, Shapiro said:

I actually had to experiment with how much etching would result in a visually pleasing balance of engine-turning vs meteorite in the main part of the dial. Not enough etching and you cannot really see the  Widmanstätten patterns. Too much etching and the engine- turning completely disappears. I decided to etch it enough so that the meteorite is very obvious and you need to look to see the engine-turning. 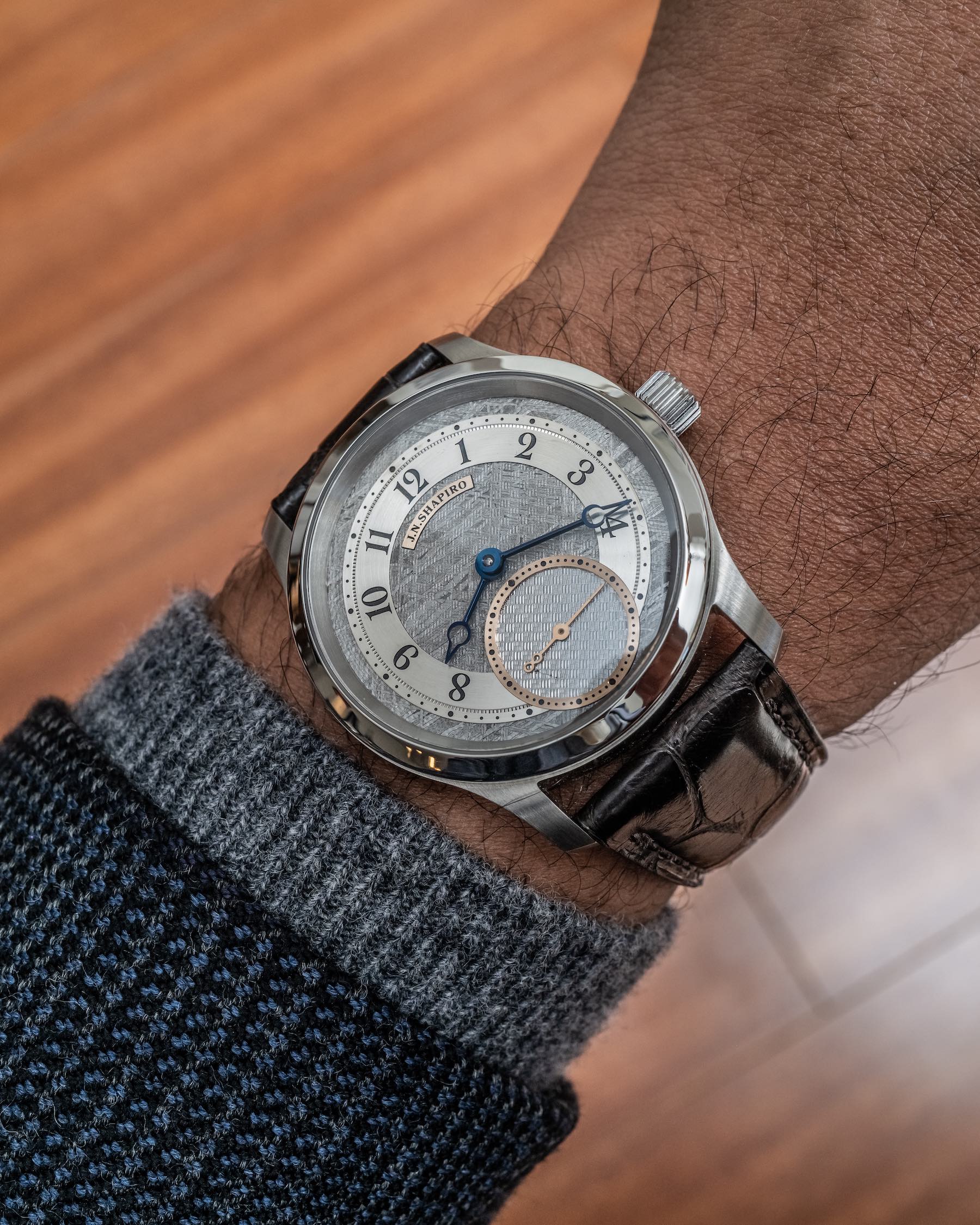 So, the outcome of the central part of the dial really was determined by figuring out the perfect balance of how these two techniques (etching and engine-turning) affect the Gibeon meteorite. The engine-turned meteorite shown in the central dial is simultaneously chaotic and mesmerizing, with subtle basketweave guilloché work making itself known without disturbing the meteorite’s pattern too much. It all comes together in a stunning, almost silver color dial that is the result of 150 hours of work. 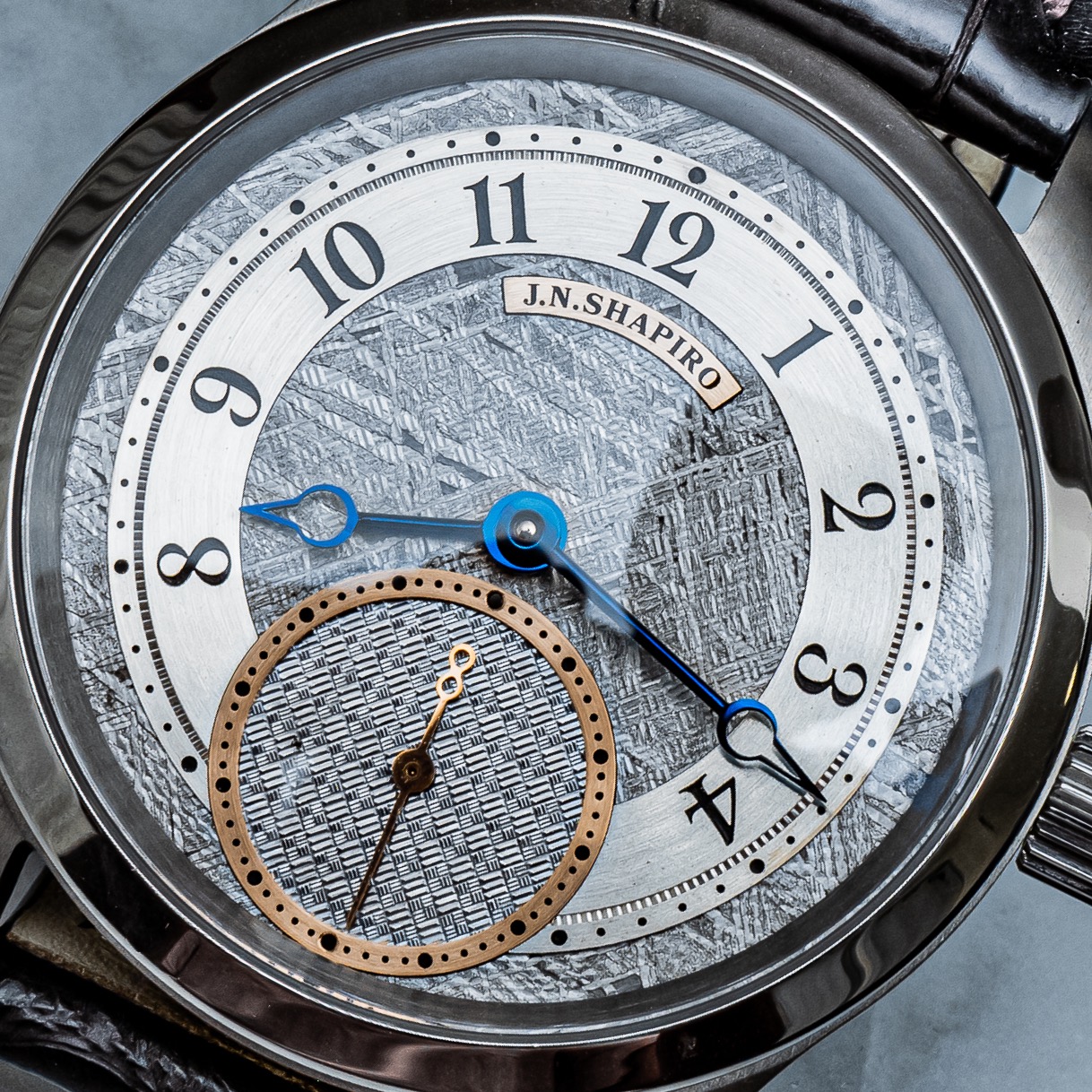 Note that the seconds subdial doesn’t appear to have the defined Widmanstätten pattern, but that doesn’t mean it isn’t meteorite, though. Shapiro had to balance etching and engine-turning on the center dial, but he didn’t with the seconds subdial at all because the process totally removed his signature Infinity Weave. (Personally, I’m glad this subdial isn’t etched, as it contributes to the overall design of the piece.) You’ll notice what looks like a crack in this area, and that is just a fact of working with natural meteorite. I believe that a four-billion-year-old meteorite shouldn’t look too “perfect” because it’s not something lifted off the set of a movie.

This is Wabi-Sabi. It’s the crack that runs through an antique bowl or the patina that forms on a bronze statue over centuries. For me, this natural sign of the meteorite only enhances the obsessive perfection of the Infinity Weave. 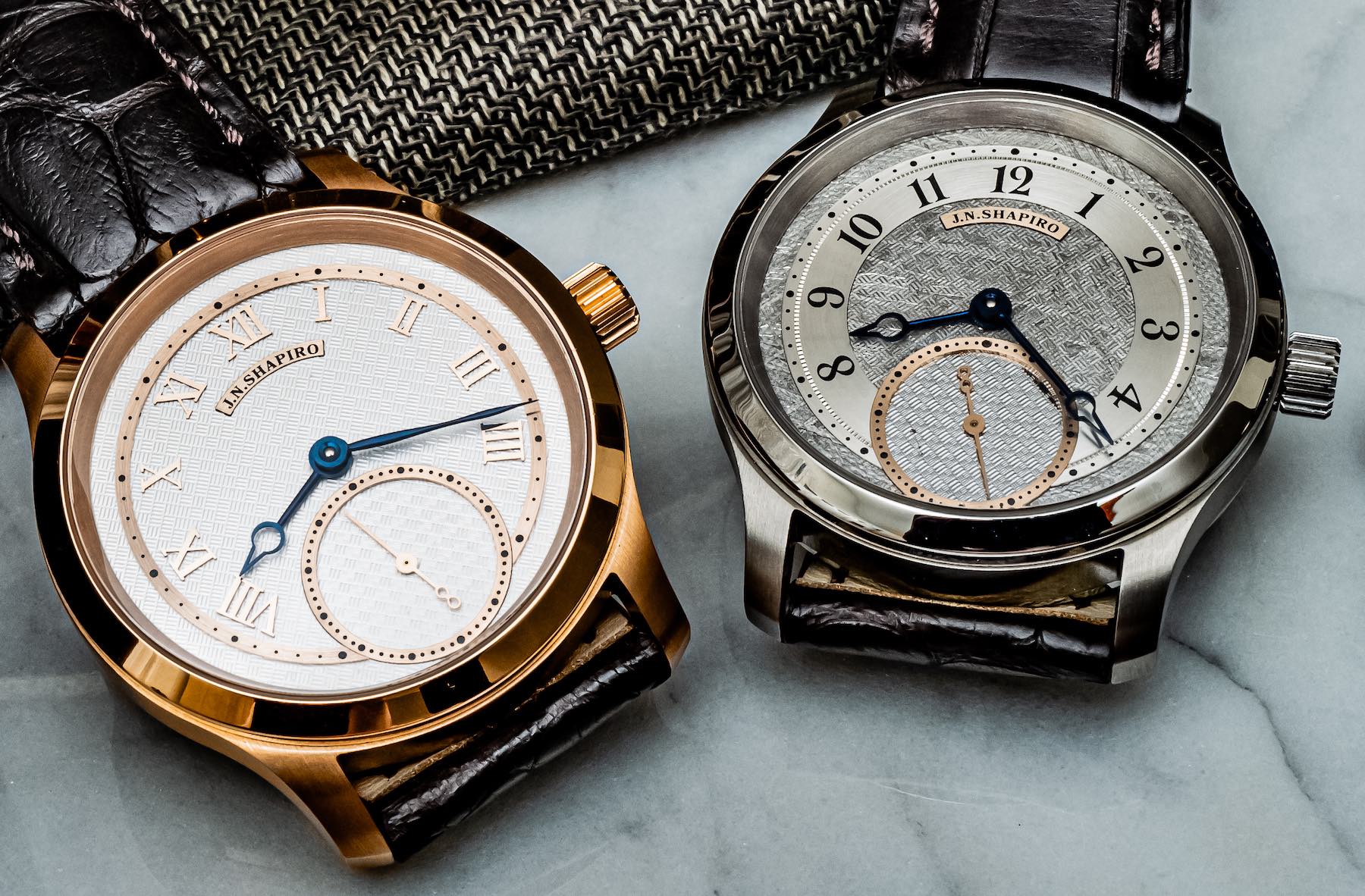 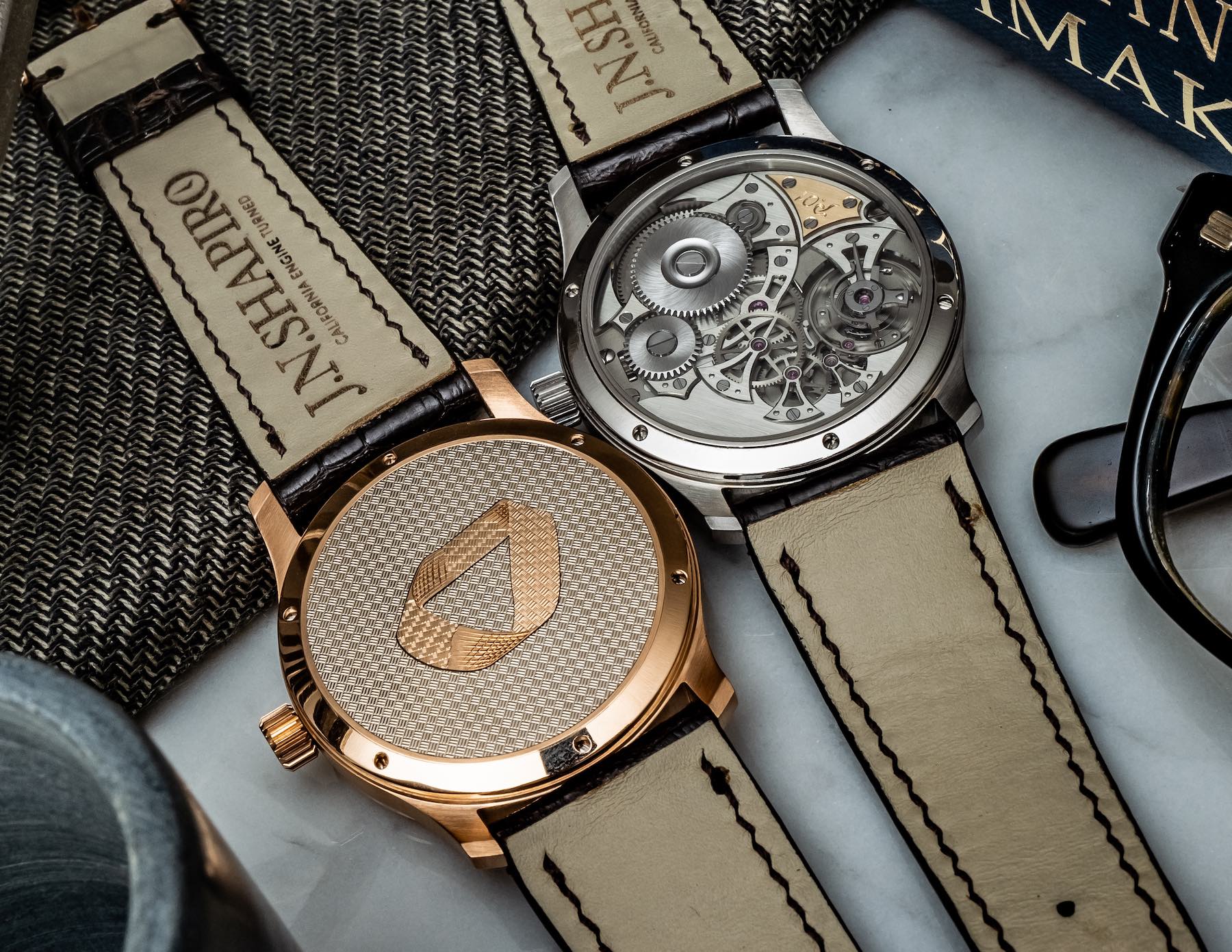 The blued Breguet hands and seconds hand with Infinity counterweight are signatures of Shapiro, though the chapter ring does have something new. Shapiro’s pieces typically use Roman numerals on the dial, but I think there’s an added formality there that doesn’t really line up with this particular piece. In the two photos above, you can see how the dial and exhibition caseback make for a bit more aesthetically “casual” piece when side by side with a more traditional J.N. Shapiro Infinity Weave piece.

Being as obsessive to detail as Shapiro is, he actually worked with London-based artist Lee Yuen-Rapati in designing a new typeface specifically for this dial, engraved and filled with black lacquer. I hope to see these Arabic numerals in future J.N. Shapiro pieces. 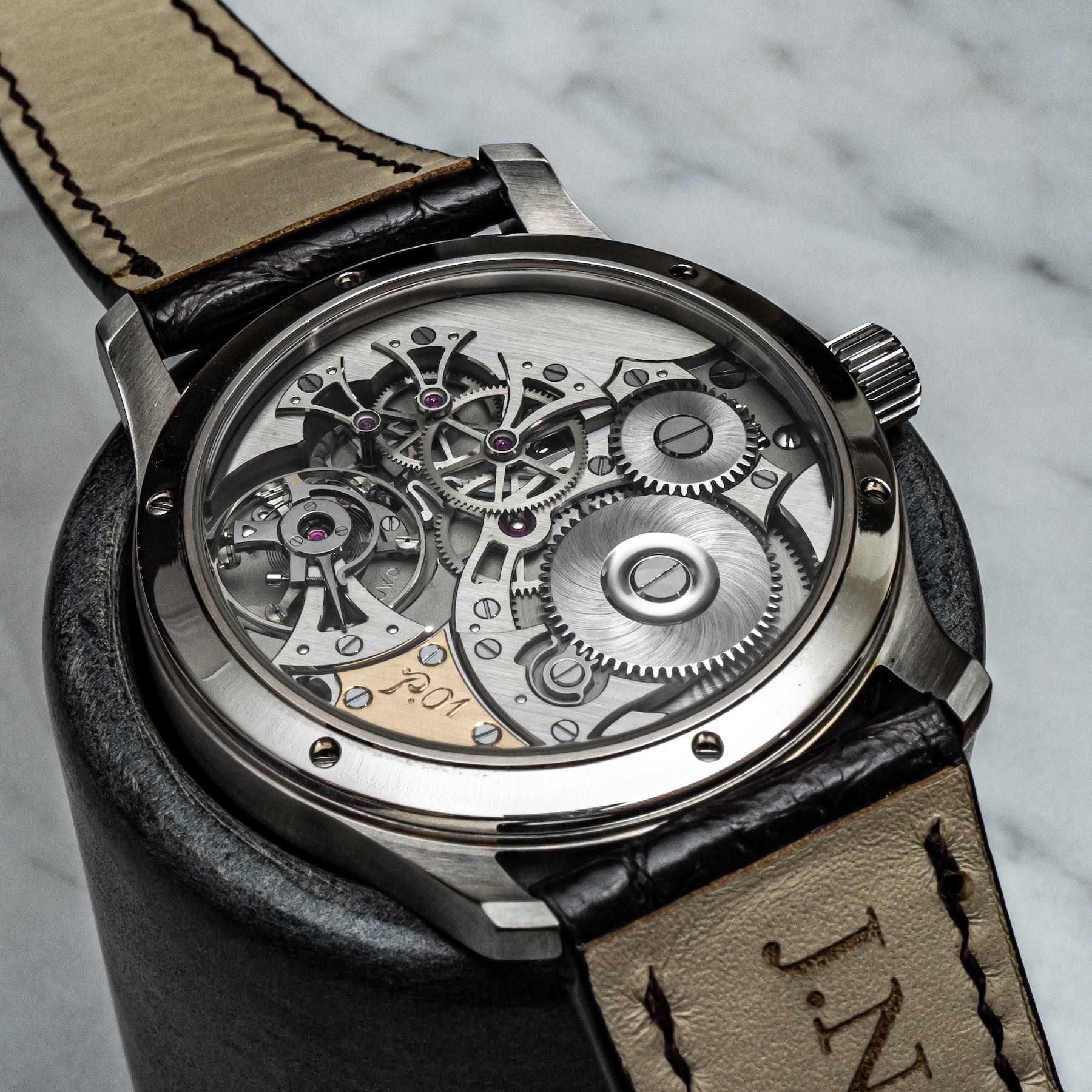 The case of the Infinity Series P.01 is 40mm-wide, 9.75mm-thick, and has a lug-to-lug height of 47mm. With  30M of water resistance, it’s seen here in steel but is also available in white or rose gold. Turning the case over reveals the Uhren Werke Dresden UWD 33.1 movement, the German manufacture that’s associated with Lang & Heyne. It’s a beautifully designed manual-wind movement you don’t see too often and is done in nickel silver. Operating at 21,600 vph, the UWD 33.1 has a 53-hour power reserve. 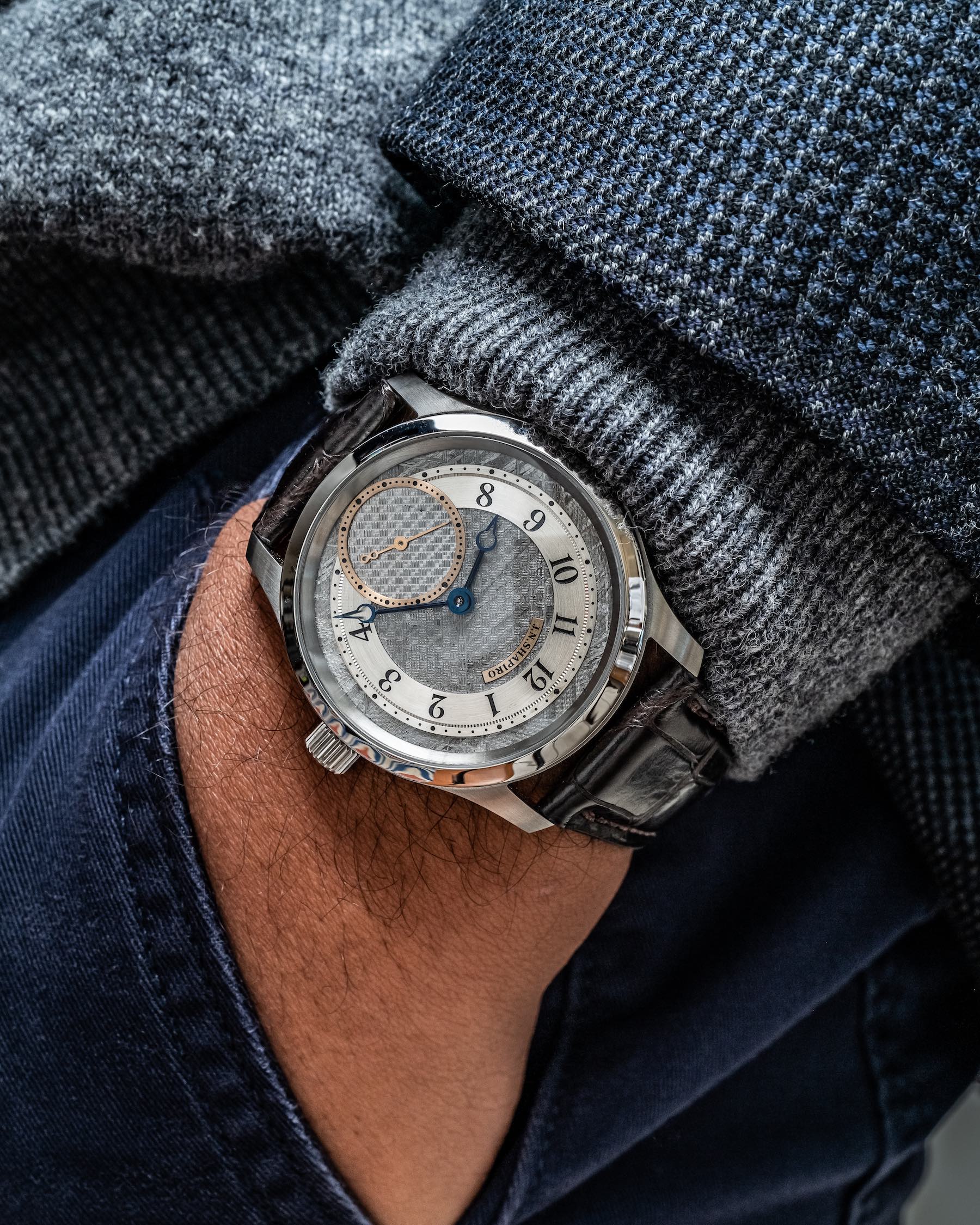 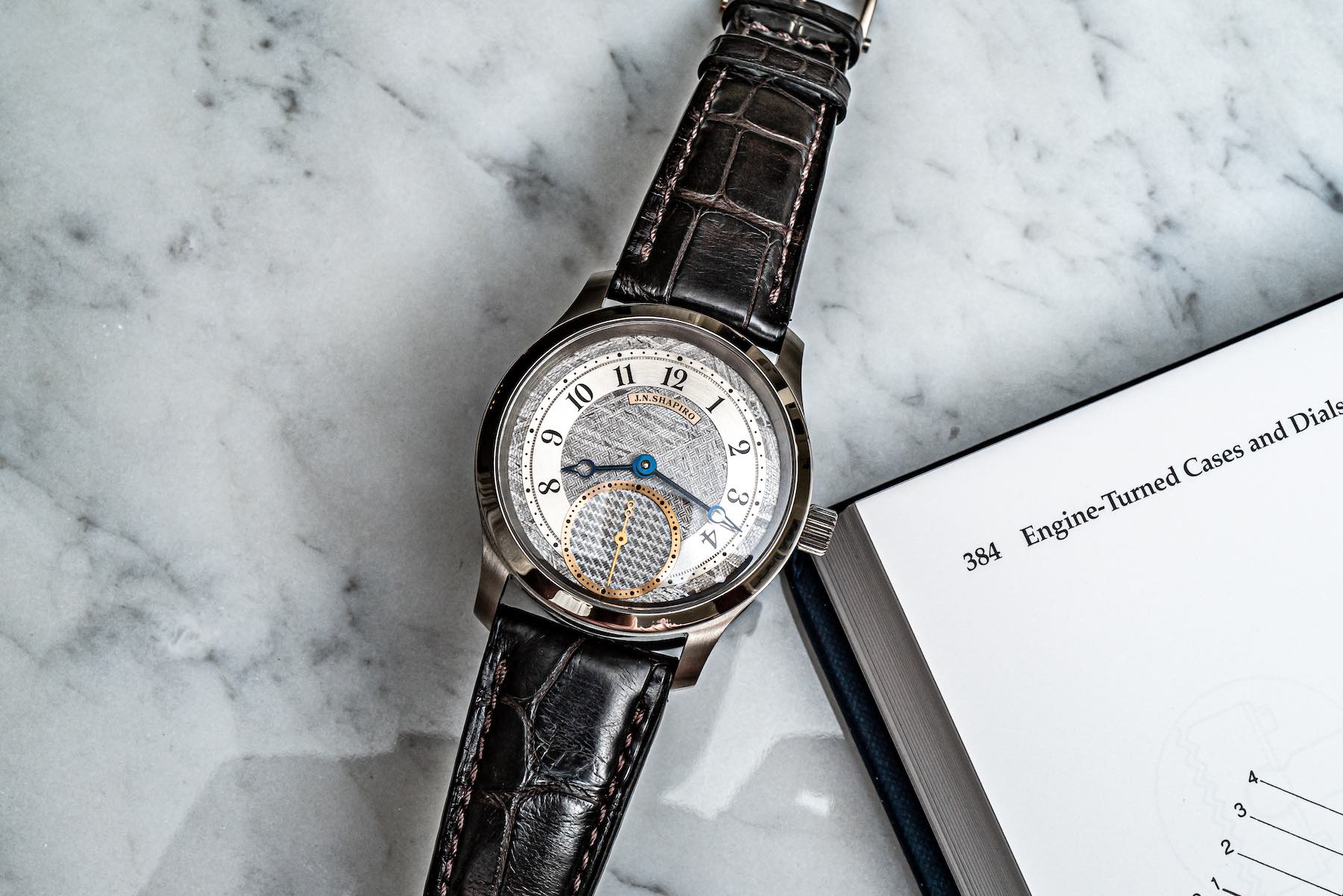 The J.N. Shapiro Infinity Series P.01 in steel is priced at $21,500, $30,750 in rose gold, and $31,775 in white gold and was specially released in collaboration with San Francisco-based Collective, and limited to 10 pieces — which, sadly, may all be spoken for. Being such an enthusiastic fan of J.N. Shapiro, I am now most excited to see what comes next after the Infinity Meteorite P.01. You can learn more at jnshapirowatches.com.