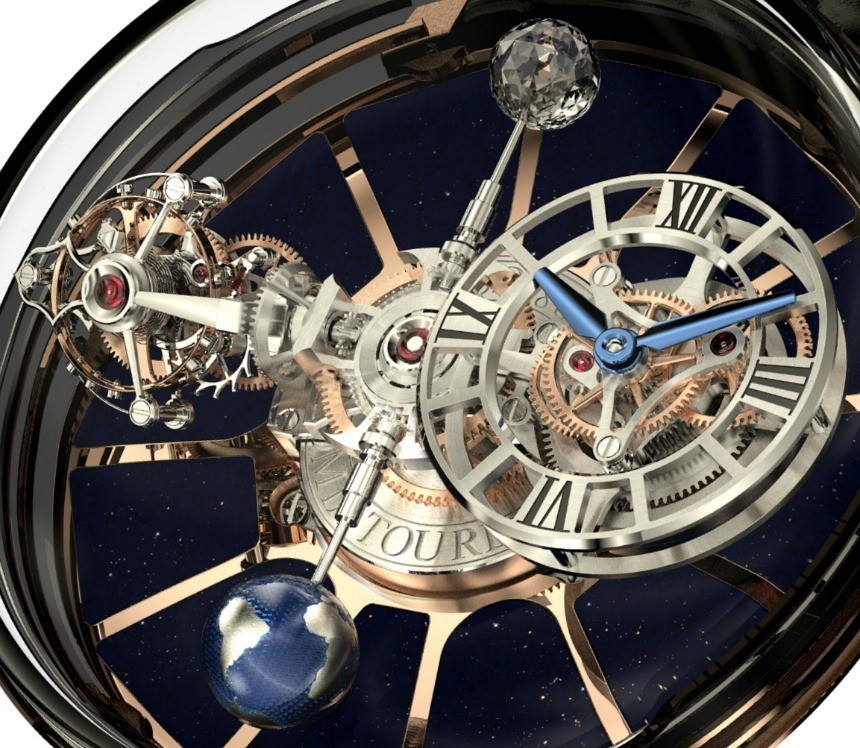 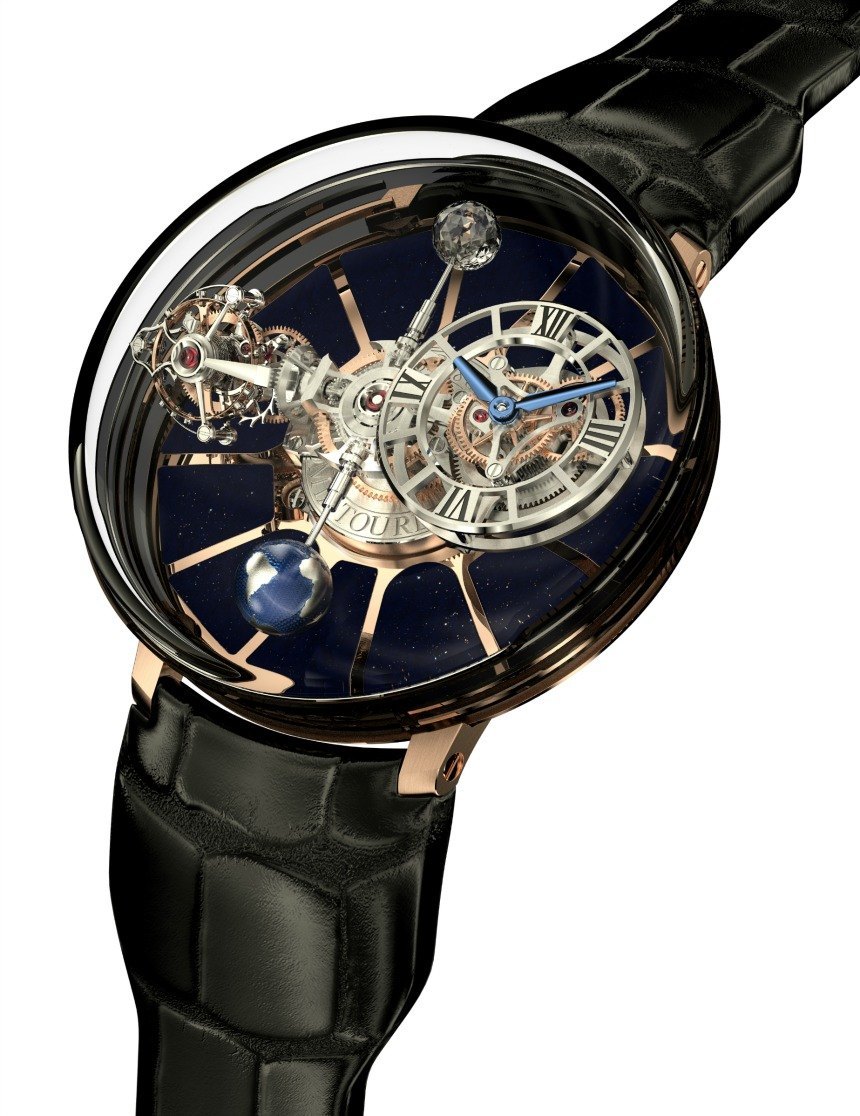 For 2014, Jacob & Co. returns with a rather amazing watch creation sure to impress everyone from traditional watch lovers to the public at large. Watch the video below of the new Astronomia Tourbillon and it is easy understand why “wow” is a typical response to this complex and very interesting horological creation. When and whether the Astronomia will actually be produced is another question, but even if the timepiece remains a digital video I would be happy at the creation of the mere concept.

Jacob & Co. was one of the first watch makers to understand the power of “insane watch,” that being a mechanical watch of epic complication meant solely to wow and impress in a manner akin to the tone and content of many rap music videos. These are designed to be “ultra-luxury lifestyle” watches for people who buy new yachts when they are bored and surfing eBay on their phone while waiting for their personal bankers to exit the toilet of the yacht they are currently sitting in. The only thing about a watch like this which is meant to make sense is that it is supposed to be more impressive than what most other rich people can afford.

None of what I am saying is meant to be snarky or sarcastic. This is really what the rather small target demographic of timepieces such as this can be like. We are talking about those who are new money, and new lots-of-money. This type of consumer is as interested in exclaiming their wealth as they are sometimes ill-equipped to spend it. Having said that, a piece like the Astronomia Tourbillon does come with an air of tasteful sophistication given its high-horological pedigree. While Jacob & Co. may have a “diverse” client base who represent both people you would and would not want to dine with, when they go all out, they most certainly have the ability to do it right.

Little information is currently available on the Astronomia Tourbillon aside from the video and pictures Jacob & Co. was nice enough to equip us with in preparation for the piece’s “release” at Baselworld 2014. We hope to see it in person there or eventually. Sometimes watches like this are initially debuted in computer render form only to be actually released several years later as the time required to produce working movements can take much longer. That may be the case here, as the movement in the Astronomia Tourbillon appears to be wonderfully ambitious. While the watch is not, per se, an astronomical complication, it is themed after them. The center of the watch is the “sun” and around it there are four orbiting objects.

These objects include a dial for the time (that remains upright in all positions as it moves around the main dial) a rotating representation of the earth, a spinning spherical crystal (perhaps a diamond), and lastly, an impressive looking bi-axial tourbillon. This is all based on a wonderful looking planetary gear arrangement that any engineering student (or watchmaker) would be proud to have as their term project.

It is unclear whether or not the spinning earth moves in concert with the planet’s 24 hour cycle of if it can be clearly used to indicate anything. It doesn’t even really matter as its simple motion looks interesting enough. The dial for the time is perhaps what impresses me the most as it is both legible and appreciably complex in its visual presentation. 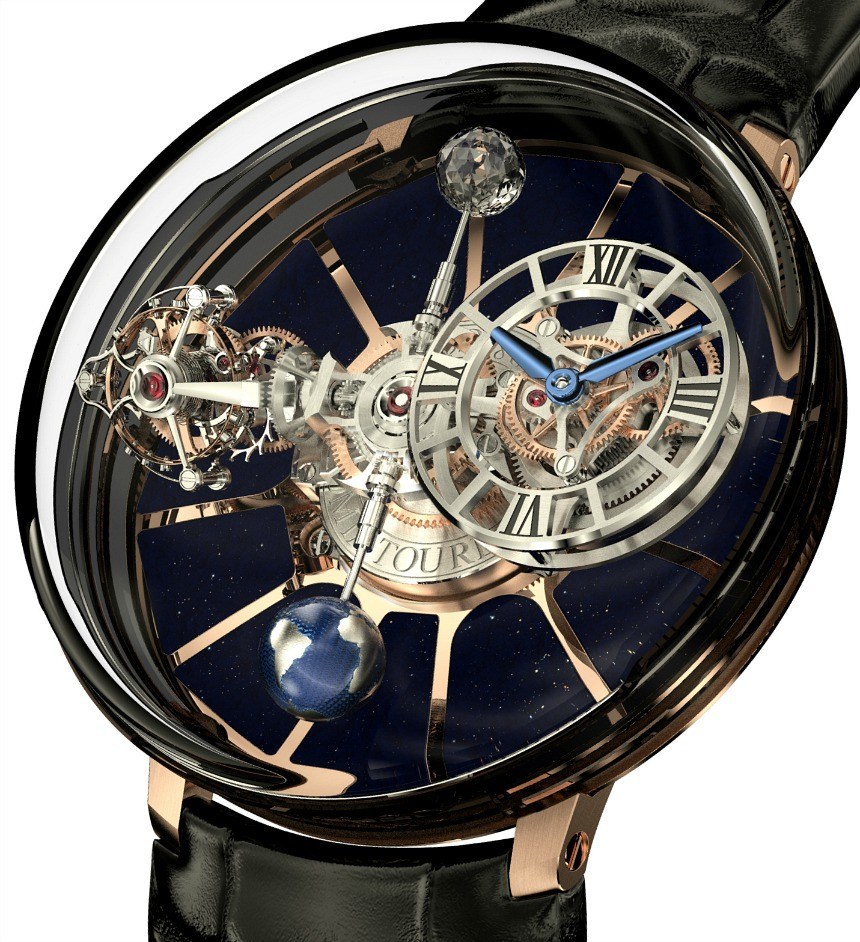 Jacob & Co. has presented the Astronomia Tourbillon in a large-diameter 18k rose gold case with a bezel and crystal made out of a single piece of sapphire crystal. This allows for a full view of the dial from all angles. Also note the lack of crown, which means that it is either on the top of the watch or more likely somewhere on the back. The mechanical movement itself represents a rather small portion of the dial by design to allow for a vastness to the case and feeling that the four “planets” have a lot of room to move around. It will more than likely be manually wound.

As an exercise in pure horological decadence, the Astronomia Tourbillon certainly hits the spot with a sinfully interesting watch whose production cost and eventual retail price is probably equally awesome. We at aBlogtoWatch love this stuff because it makes owning a simple timepiece all that much more interesting. We can look at our rudimentary “classic” watches and imagine that somewhere out there, someone may be wearing an Astronomia Tourbillon and be reading the exact same hour of the day but with so much more panache. jacobandco.com