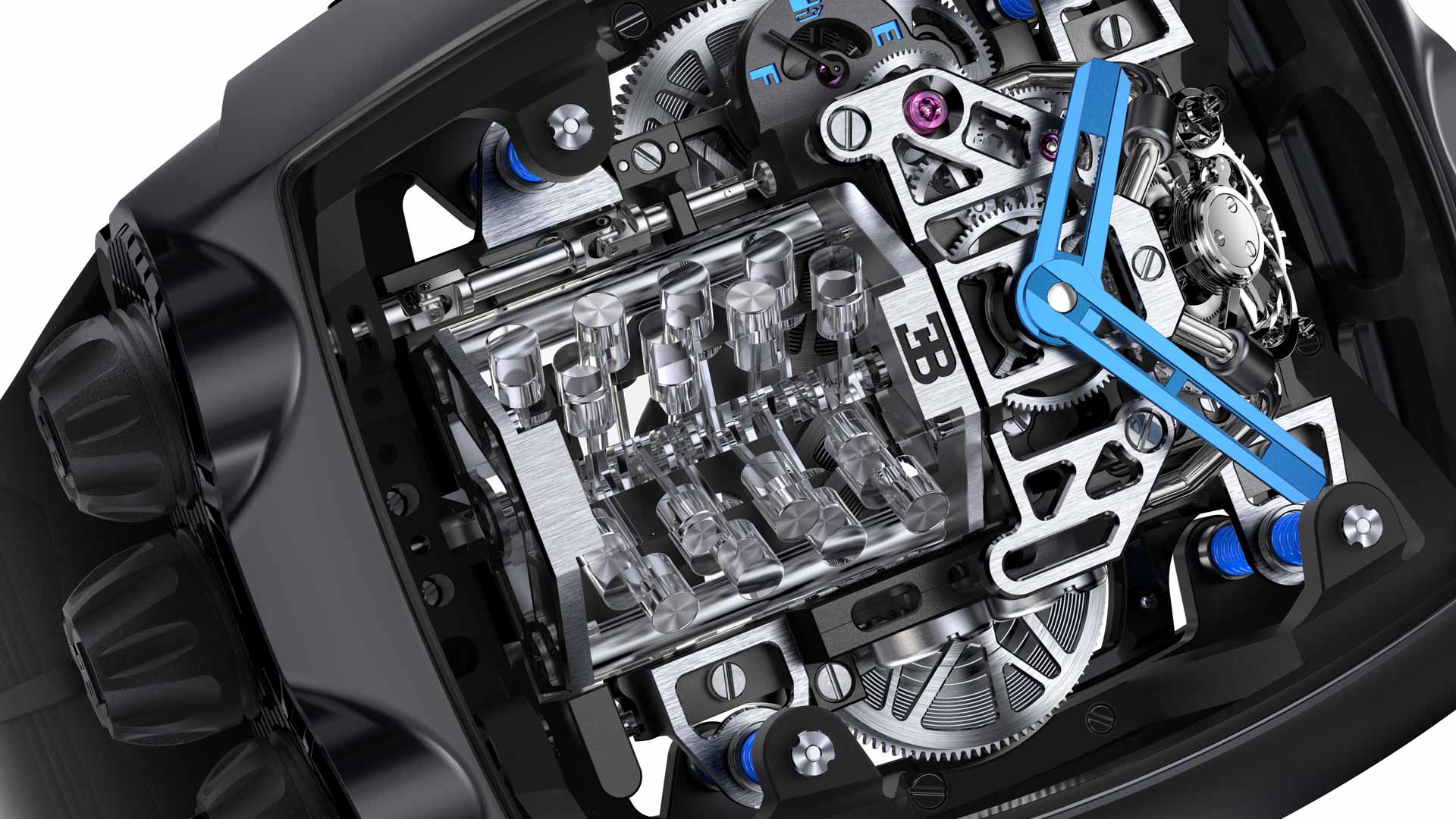 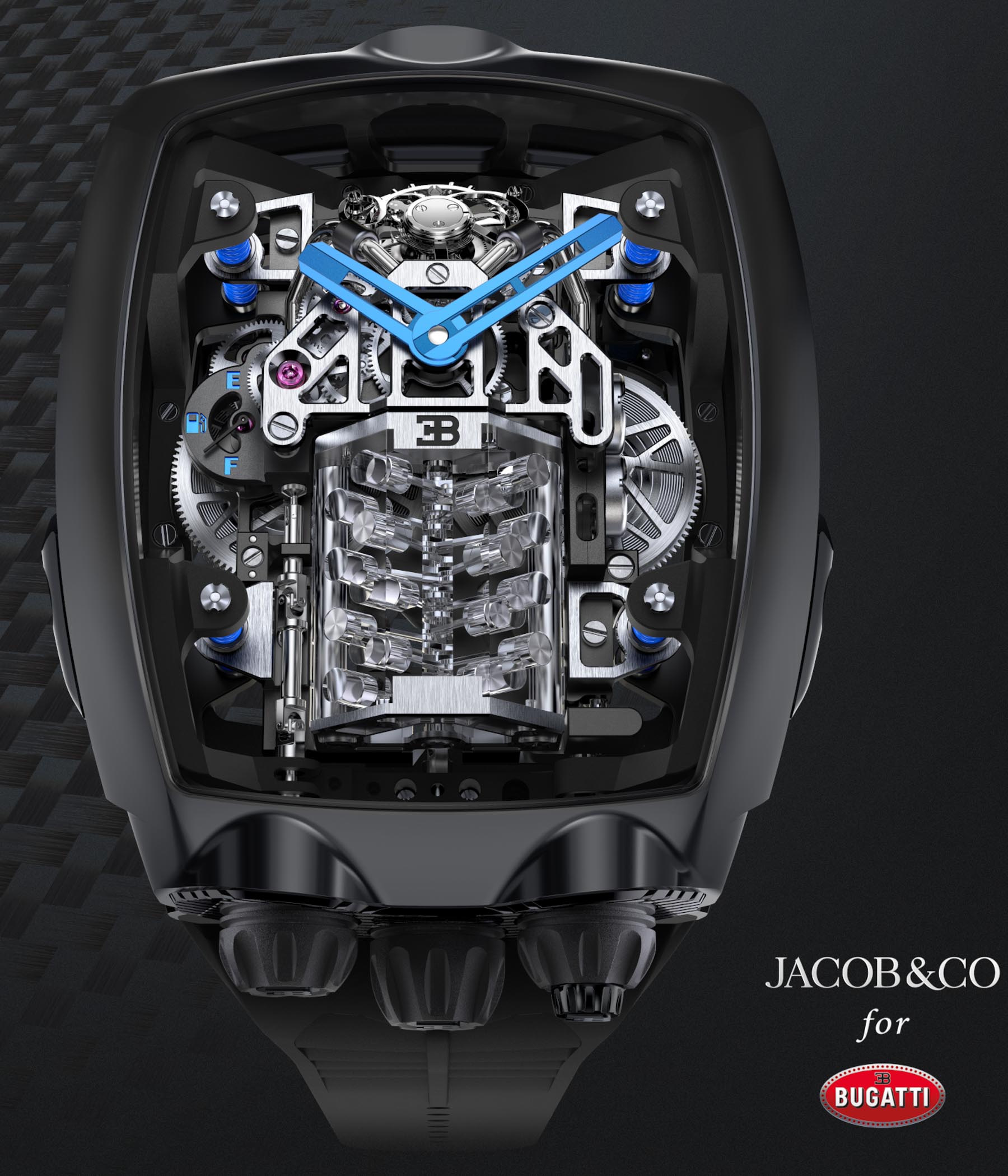 Last year we saw Jacob & Co. secure an impressive partnership with hypercar royalty Bugatti. Now, the first ultra-high-end, completely bespoke Jacob & Co. watch created in collaboration with Bugatti makes its debut: the Jacob & Co. Bugatti Chiron Tourbillon. It’s what you would expect: an extremely complicated watch with yet another of Jacob & Co’s signature automaton mechanisms, this time with a functioning miniature W16 engine inside that mimicks the 16-cylinder motor that propels the Bugatti Chiron. 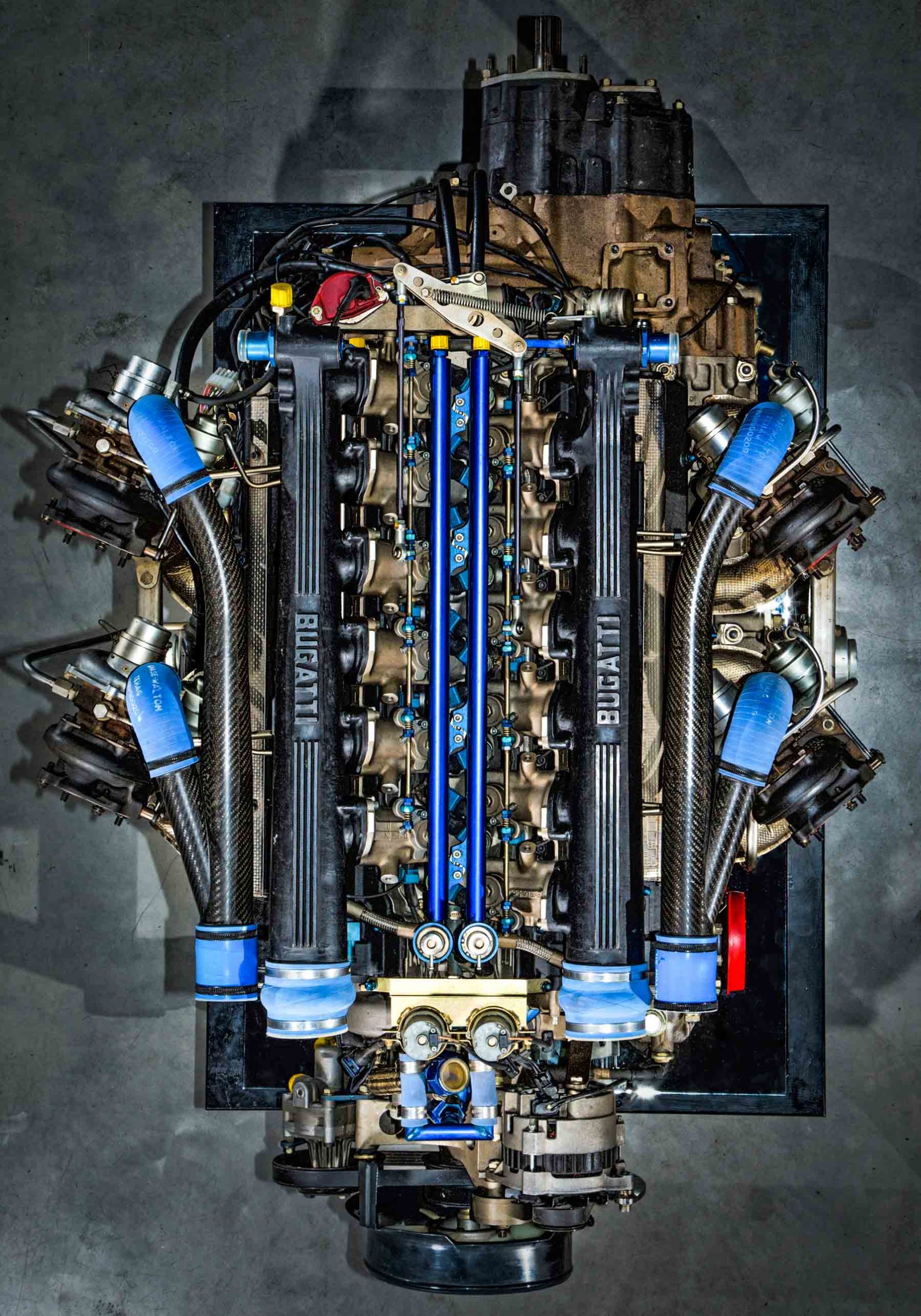 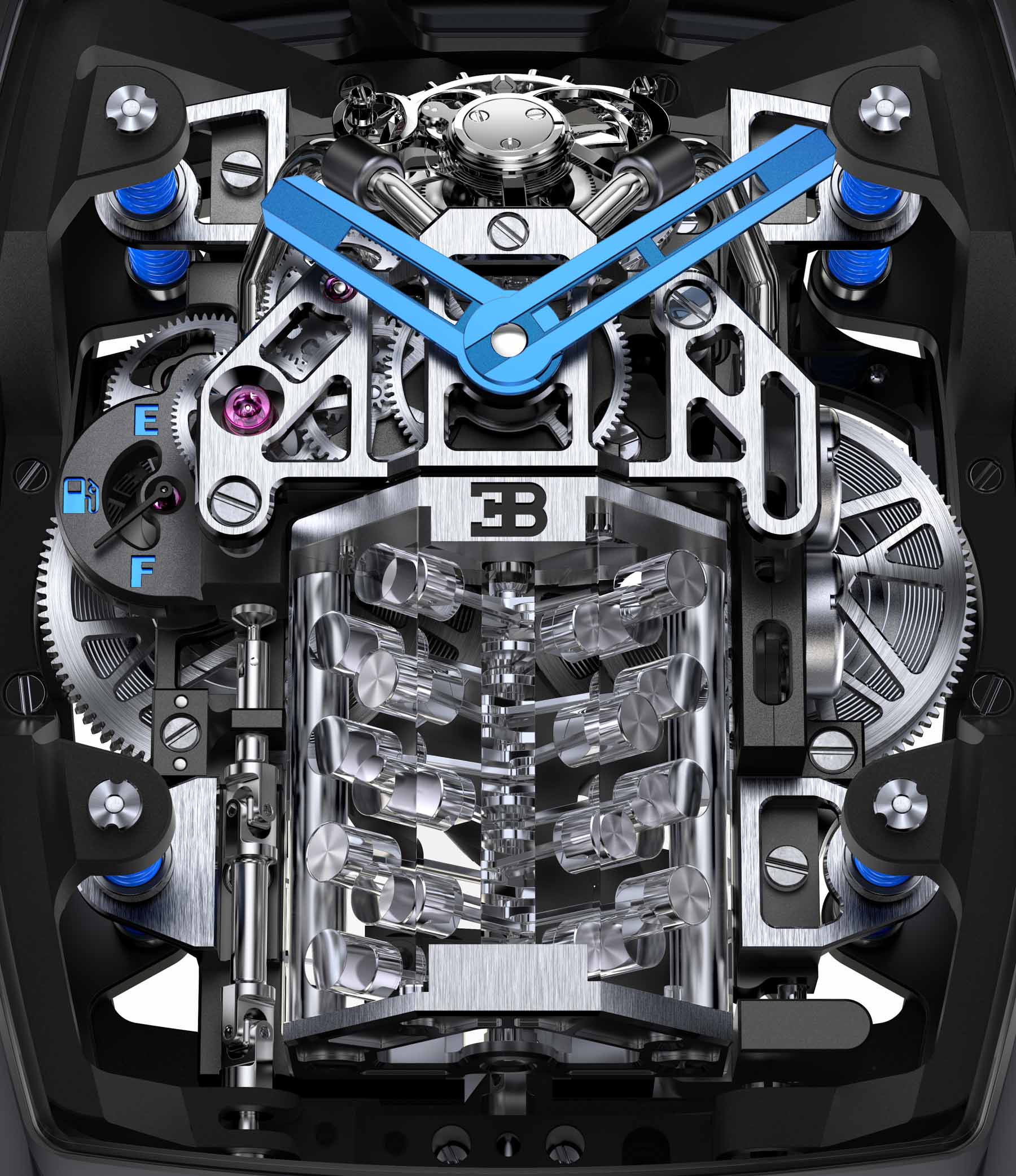 Cutting to the chase, the star of the Jacob & Co. Bugatti Chiron Tourbillon is its incredible JCAM37 movement. Composed of 578 parts and 51 jewels, it measures 41.7 by 36 millimeters — the movement, that is, not the cased watch. Its functions include a traditional hour and minute display, a one-minute tourbillon inclined at 30 degrees towards the wearer, a W16 engine block in sapphire with an on-demand animation with pistons and crankshafts flying around, and a power-reserve indicator at 8 o’clock. The open-worked barrel at 3 o’clock is not quite a power-reserve indicator but will let you eyeball the tension left in the barrel for the animation. 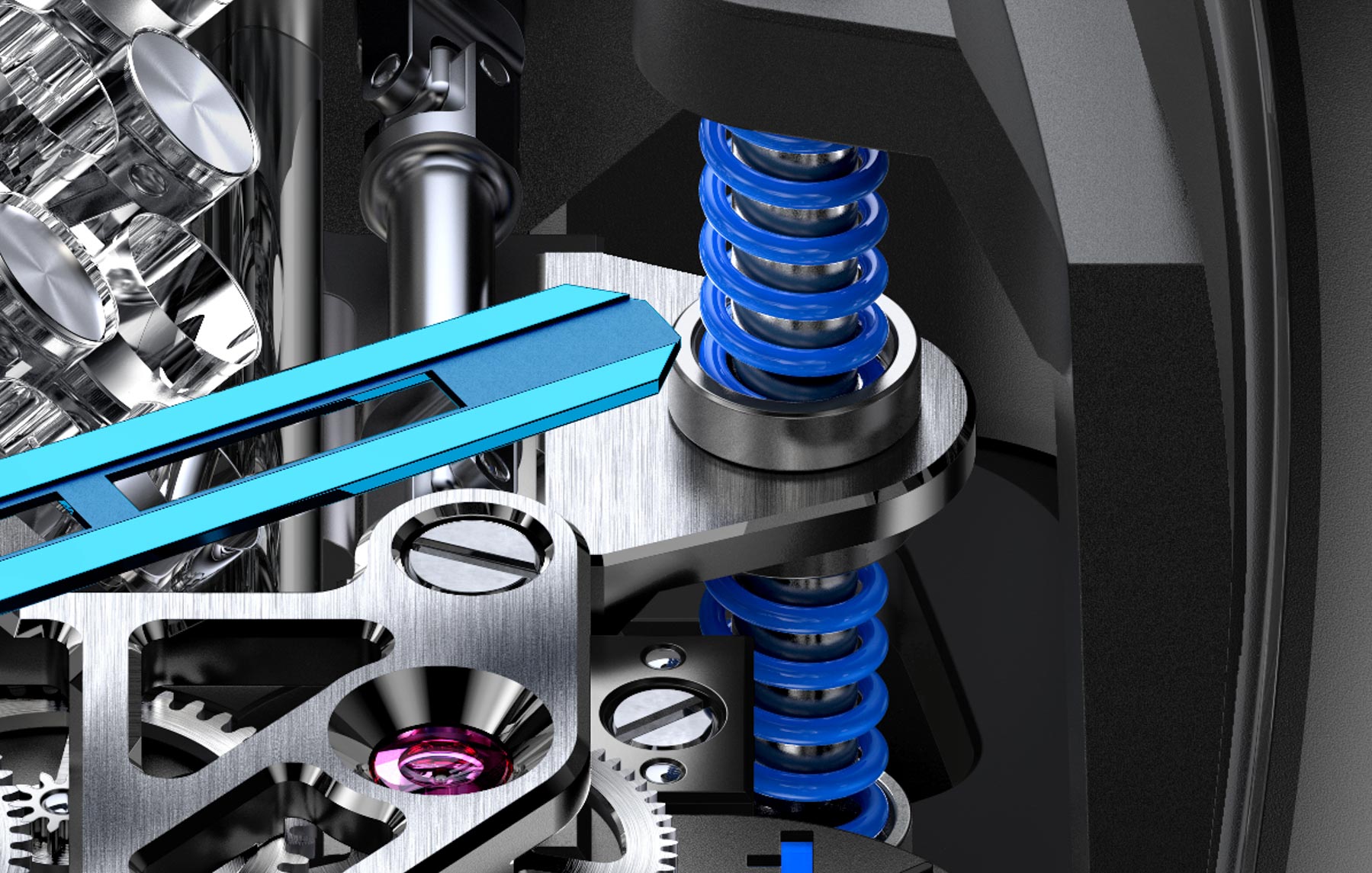 The JCAM37 movement is suspended on all four corners, having the Bugatti Chiron Tourbillon join the select ranks of watches with “floating” movements. (The TAG Heuer Monaco Twenty-Four from 2009, the Glashütte Original Sport Evolution Impact, and the Richard Mille RM 27 series come to mind.) The most complex among these will, of course, be the Jacob & Co. and Richard Mille solutions. As for the Bugatti Chiron Tourbillon, the entire movement resonating on its suspension while the three connected crown stems remain stationary forced Jacob & Co. to develop and patent an automotive-inspired transverse system, saving the crown posts from breaking as the movement wobbles around. 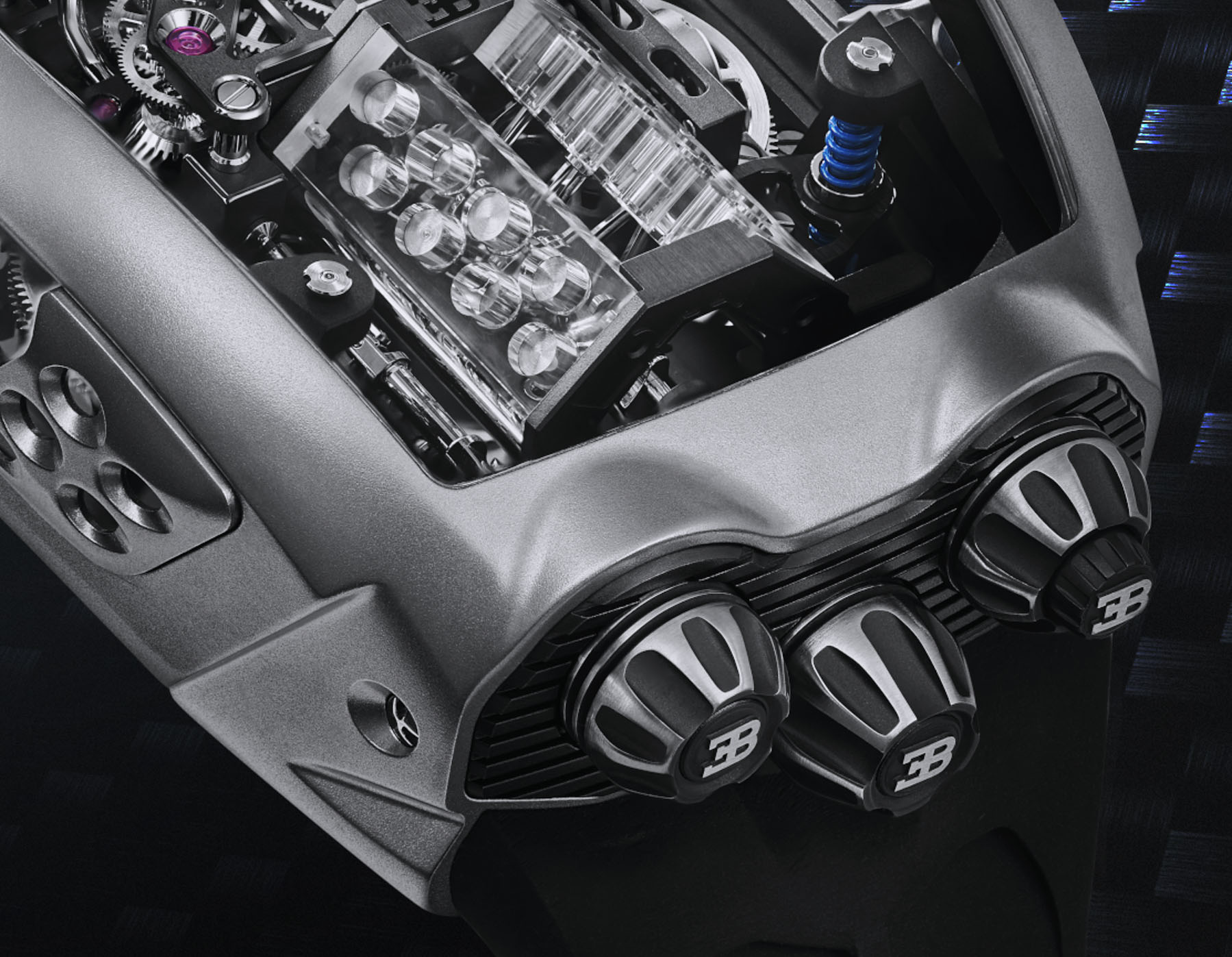 The back of the case has three stems: left for setting the times (if you really care), central to wind the movement (clockwise), and the animation (counter clockwise). The right stem acts as a pusher used to start the animation.

The animation lasts about 20 seconds and can be used three times before rewinding the mainspring dedicated to it is required. This is standard operation for animated functions with such immense energy needs. To give you an idea on the energy consumption, while the same sized barrel could energize a watch for 2-3 days, the strain of the W16 engine allows for about a minute’s worth of operation. 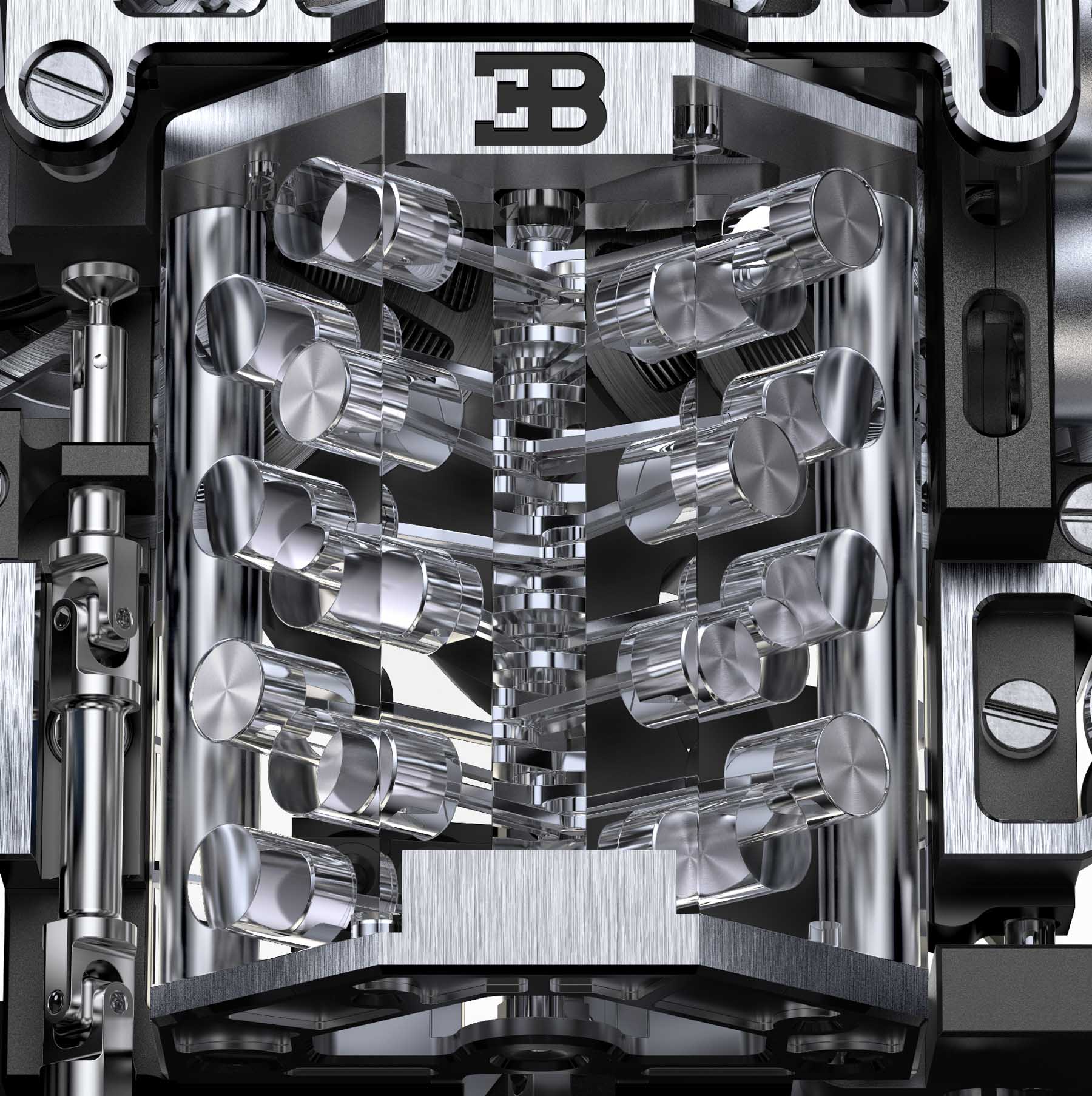 I wish Jacob & Co. had shared more technical images and views of this sapphire engine block and the pistons within. True car enthusiasts — which at least some of the Bugatti clientèle are — will appreciate the crankshaft in the bowels of the block, manufactured from a single solid block of stainless steel. When the pusher on the back of the case is pressed, the animation’s dedicated barrel begins to turn at an expedited speed, driving the crankshaft through a series of gears, which in turn drives the 16 pistons up and down in perfect rhythm and geometry. 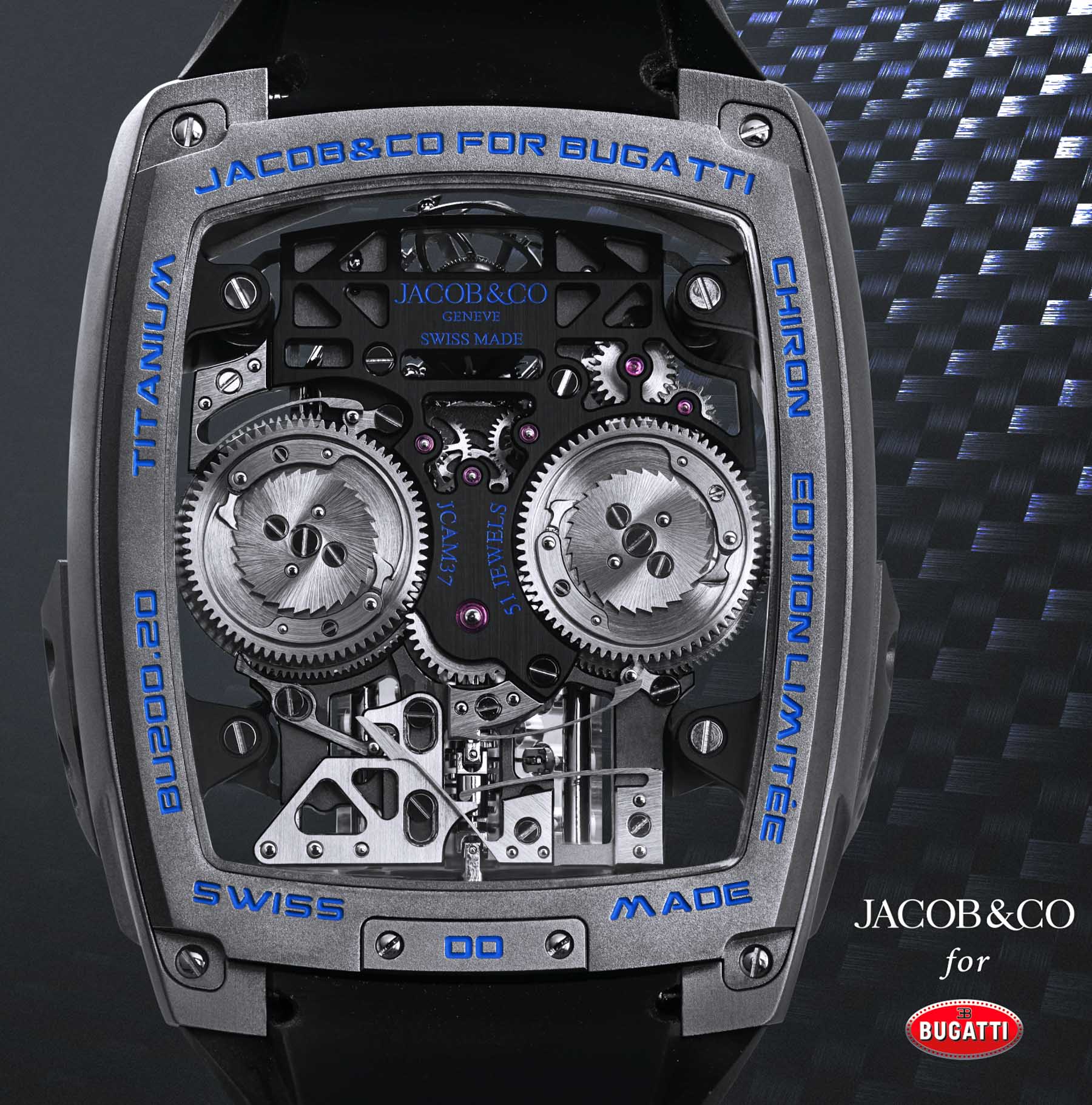 The flying tourbillon on the front, Jacob & Co. says, is a clean-sheet design, different from all its previous tourbillons. Although not a multi-axis version like on many other grand complication pieces, it is installed and driven at a 30° angle to offer better viewing when the watch is on the wrist and, according to the pioneers of the inclined tourbillon, Greubel Forsey, to attain superior timekeeping performance when compared to same-plane tourbillons. 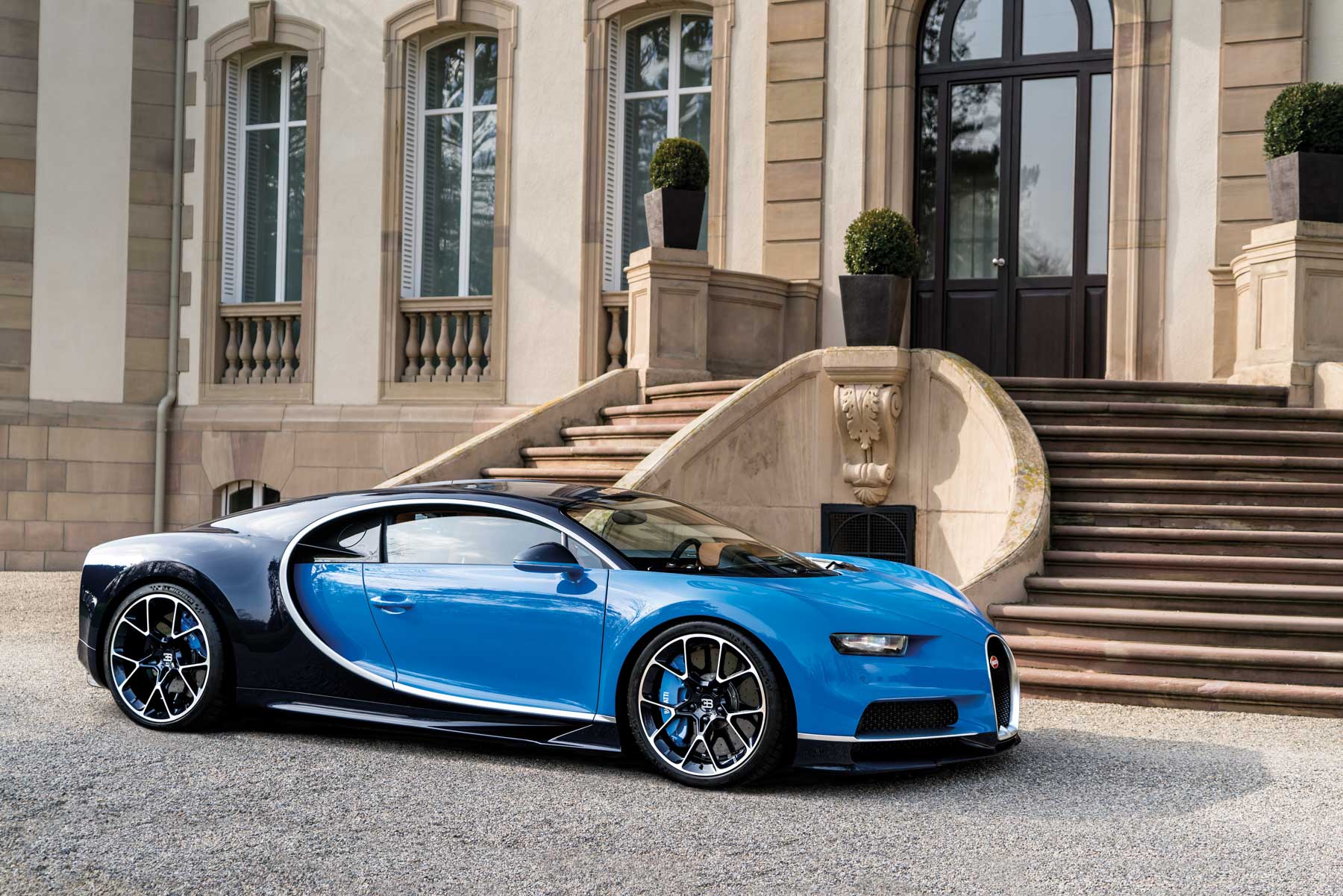 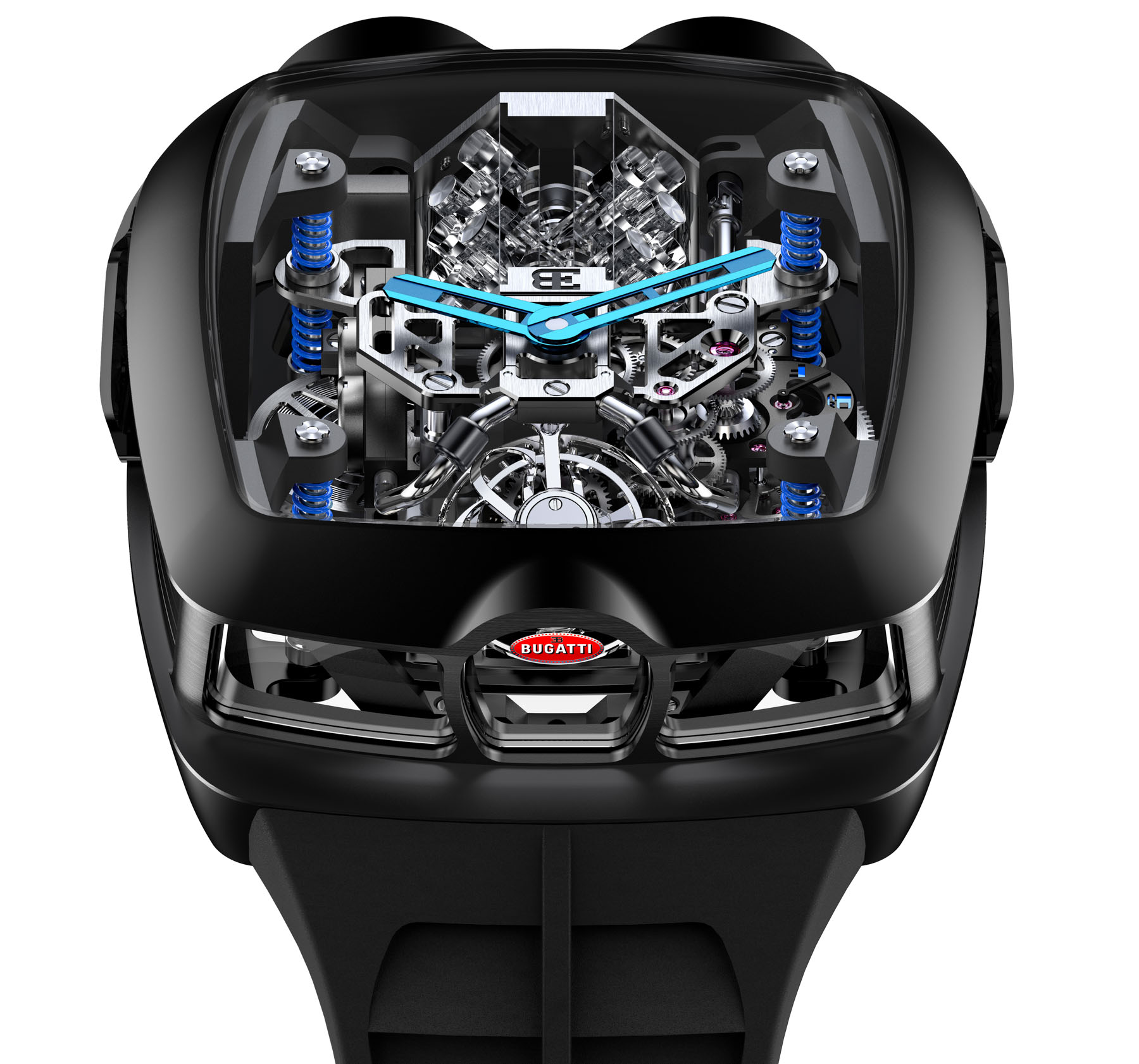 The far end of the case mimics the front grille design of the Bugatti Chiron with the signature horseshoe grill and white-on-red Bugatti logo. The case of the Jacob & Co. Bugatti Chiron Tourbillon measures 54 by 44 by 20 millimeters, is crafted from titanium with black DLC coating and is water resistant to 3 bars. The Bugatti Chiron car will take torrential rain better than the watch created in its honor — but that’s all good.

An impressive feat not to be overlooked is how fast Jacob & Co. has pulled this one off: It says “almost a full year of development” has gone into the Bugatti Chiron Tourbillon. Sometimes we get the idea major brands can spend that much time picking a new dial color, but it was certainly a feat assembling 578 components in the right order to create a W16 engine for the wrist.

Price for the Jacob & Co. Bugatti Chiron Tourbillon is $280,000, which means it might just blend into the options list for an easy tick when optioning your next Chiron. To learn more about Jacob & Co. and Bugatti, visit jacobandco.com.