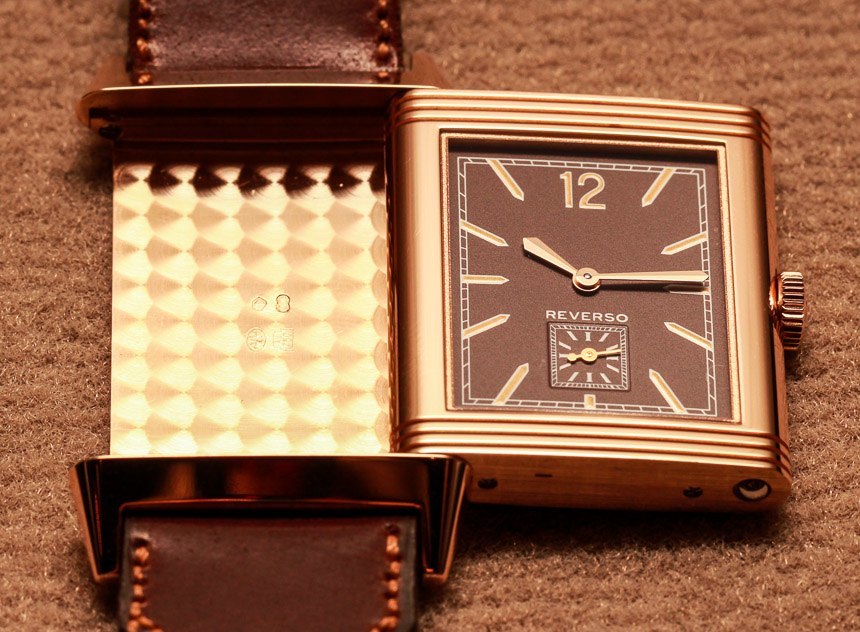 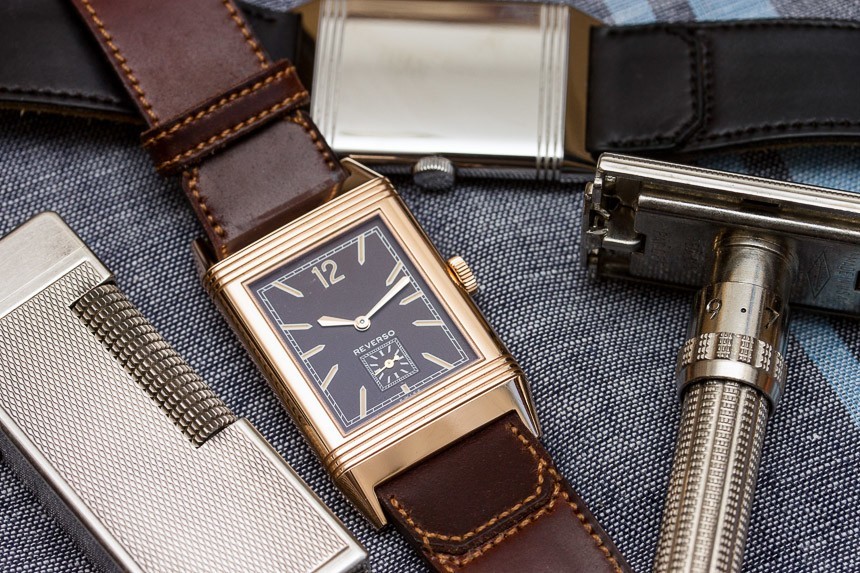 Jaeger-LeCoultre has been knocking it out of the park for the last few years with their vintage-inspired tribute collection of Reversos.  Styled after their earliest models from the 1930s, JLC breathed new life into the Reverso line by going back to their roots, using non-complicated manual winding movements, simple dials, and an ultra-thin case design.  The first in the collection, a black dial two hand Reverso known simply as the Tribute To 1931, was revealed at SIHH in 2011, and was subsequently followed up in 2012 with a red-dialed version known as the Rouge, and in 2013 with the Bleu.  Each version has been a minor variation on the same theme, and all have proven to be very popular amongst collectors.

For 2014, Jaeger-LeCoultre kept the ball rolling with the release of the new Grande Reverso Ultra Thin 1931 Chocolate, which–as you might have guessed–features a rich brown dial in place of the black, red, and blue versions that have come before it.  Unlike the previous iterations, however, the Chocolate takes it to another level in regards to the case material and dial layout, and is the first 1931 Collection timepiece to be finished in pink gold instead of steel.  The resulting color combination is truly stunning, and was one of the most anticipated releases of the January 2014 SIHH show. 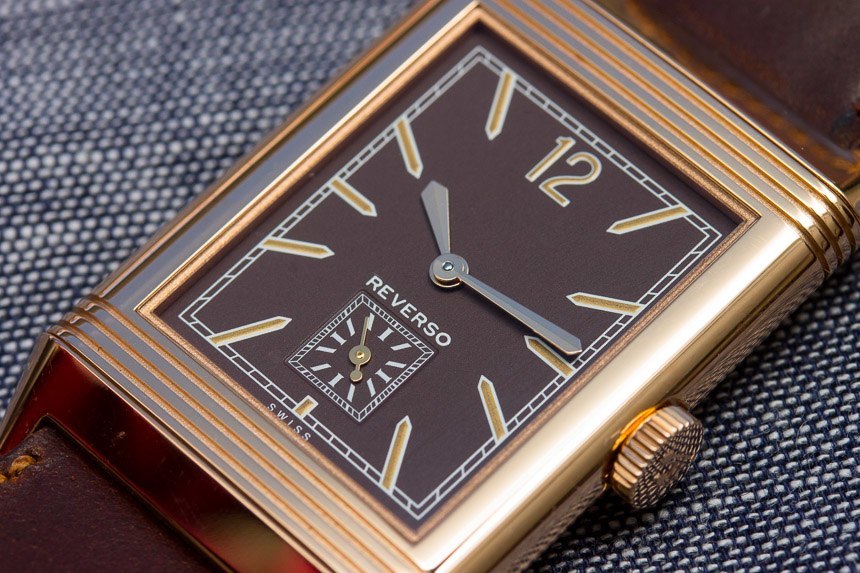 We had only a brief moment with it in Switzerland, but were recently treated to several days of wrist time stateside to give it a thorough evaluation.  I was also able to borrow the original 2011 model (a US Limited Edition on Casa Fagliano strap, nonetheless) for a side-by-side photo comparison (thanks, Adam!).  Keep reading for my impressions on the overall execution and wearability of LeCoultre’s latest Reverso. 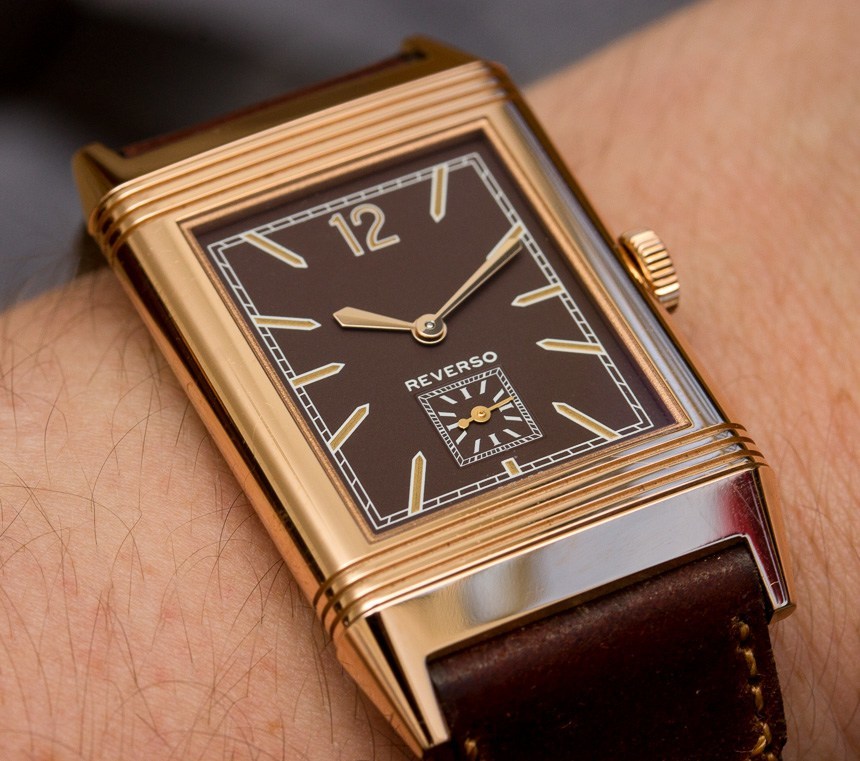 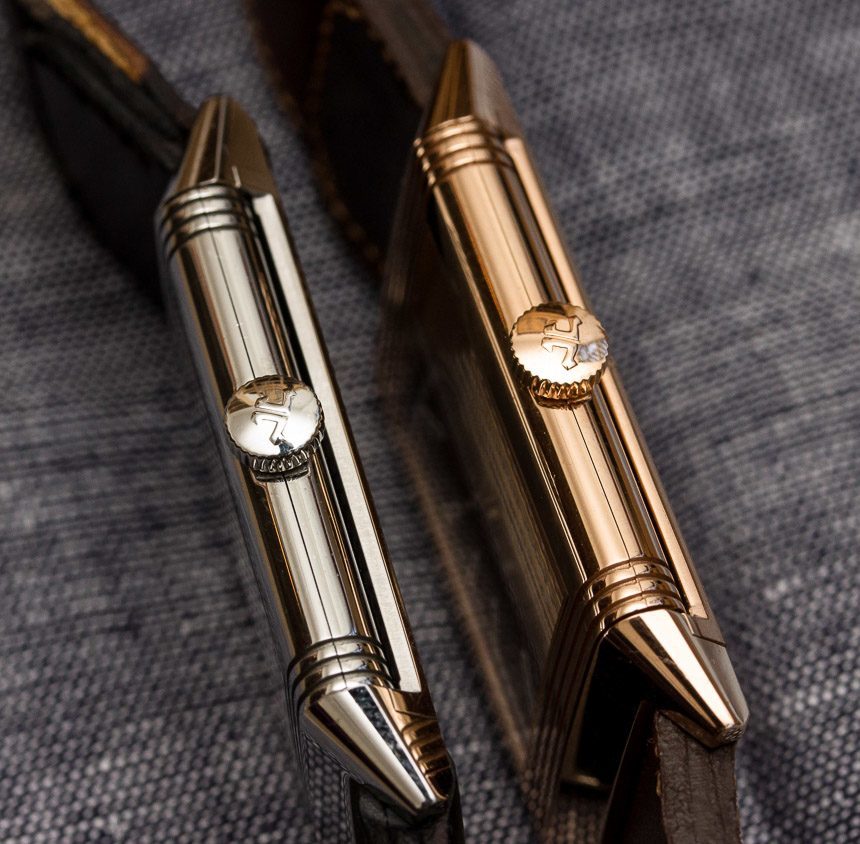 The Reverso Chocolate is housed in the ultra-thin Grande Reverso case, the same as the original 2011 model and the Rouge from 2012.  It measures 46.8mm in length, 27.4mm in width, and has an overall thickness of 7.3mm.  For comparison, the Reverso Duoface Bleu from 2013 has a thickness of 9.1mm, but lacks the second dial display on the reverse side.  As noted above, the case material is solid pink gold, and the dial features gilt hour markers and baton hands.  The watch comes supplied with an alligator leather strap, as well as a burgundy colored cordovan strap by Casa Fagliano (pictured).

The internal mechanism is based on the same manually winding unit as used in the other Tribute To 1931 collection pieces (excepting the Bleu), but features a modification for subsidiary seconds.  This movement is known as Calibre 822/2 features 19 Jewels, has a power reserve of about 45 hours, and beats at an amplitude of 3hz. 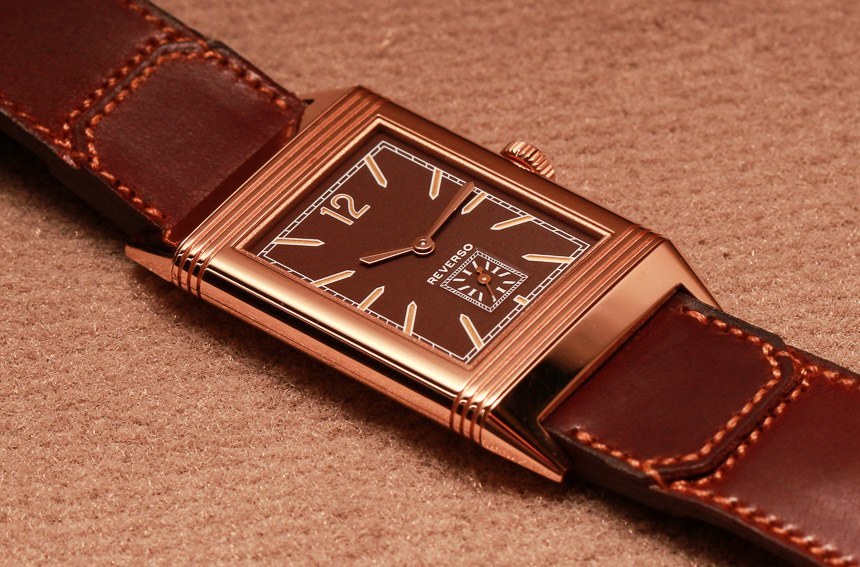 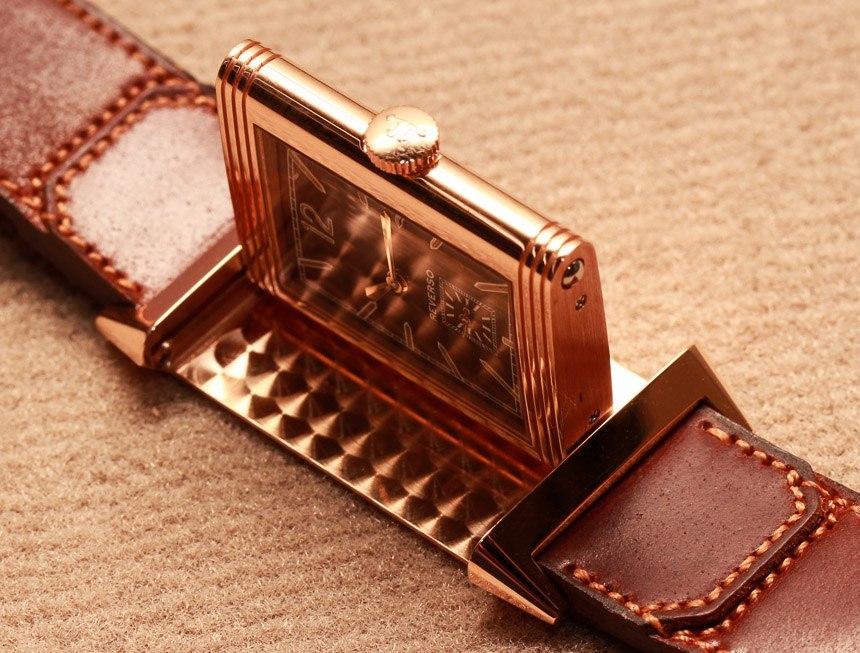 As with any watch case forged from precious metal, the Reverso Chocolate weighs noticeably more than its steel counterparts, giving it a substantial wrist presence.  This was the first thing I noticed upon handling it, and it reassured me that even with its soft metal case and thin profile, it was a solid piece that didn’t need coddling.  The weight sits low and evenly when worn, and the cordovan strap pulls it comfortably snug.

The colors of the case and dial of the Chocolate really come alive on the wrist, and it paired well with virtually everything I wear (admittedly, my personal taste in fashion and color palette may play a role in this).  Like the other Grande Reversos, the slim profile gives it a truly luxurious feel, and it tucks well under a cuff and jacket.