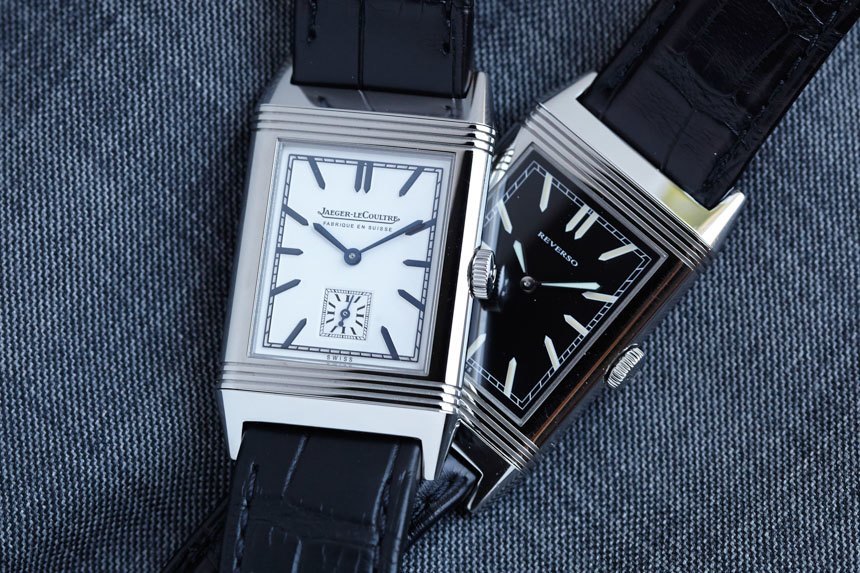 Jaeger-LeCoultre is once again stepping into some familiar territory with another addition to their historically-inspired Reverso collection. You would think I would get bored with these, but you’d be wrong. Launched in the early 1930s, the Reverso was originally conceived as a sports watch, featuring a unique reversible case design that allowed the wearer to protect the dial while utilizing it on the (Polo!) field. Today, the Reverso is a pillar of wristwatch design, and a steadfast collection in Jaeger-LeCoultre’s lineup.

In 2011, JLC released the first of its homage Reversos, called the Tribute to 1931, and the watch community was taken aback in near universal admiration. In the subsequent years, the 1931 has been followed up with spectacular Rouge, Bleu, and Chocolate models, and I can’t think of a single negative comment bestowed on any of them. Indeed, I had the opportunity to do a hands-on with the Chocolate recently, and may have slung more than a little love at that one myself. 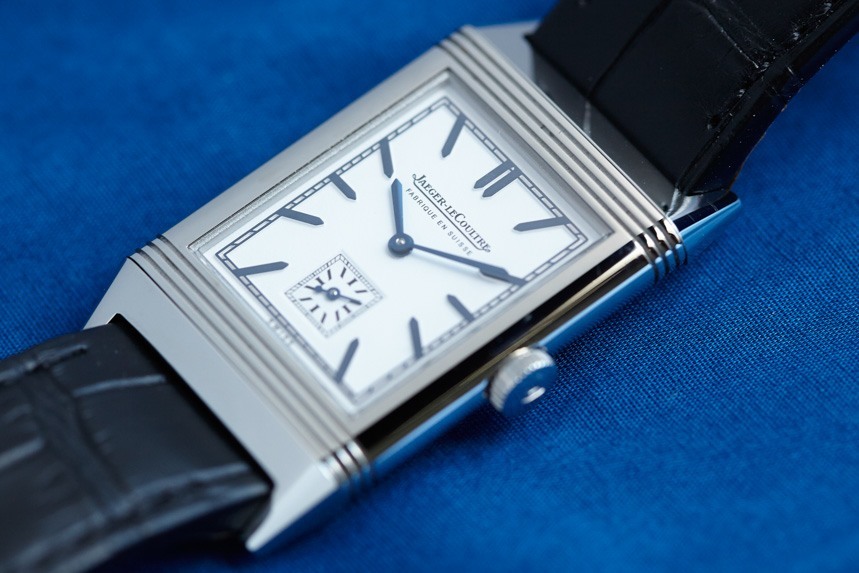 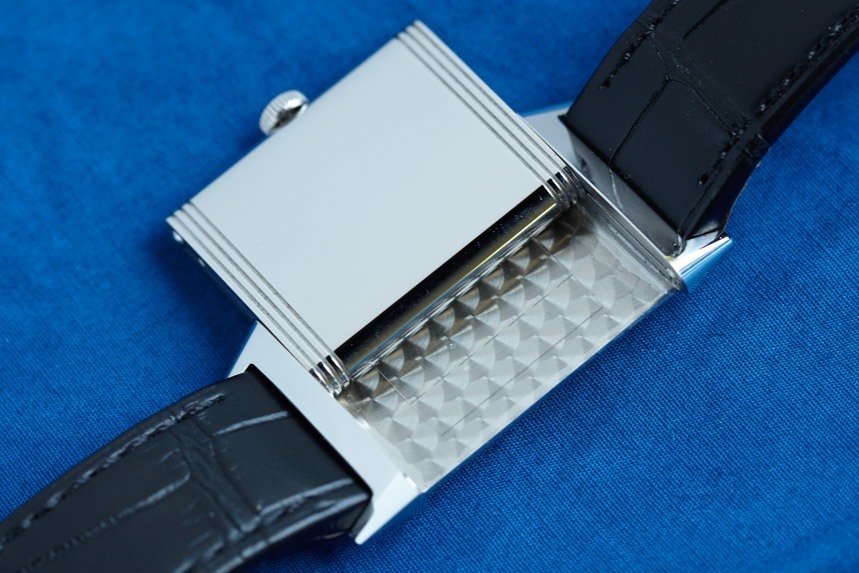 Joining the line up this year is the brilliant new Jaeger-LeCoultre Grande Reverso Ultra Thin 1948, a modern Reverso that takes its design cues from a model from the late 40s. Earlier edition models from this collection focus on the earliest Reverso designs from the 30s, whereas this piece takes a slightly more modern, post-war feel.

At first glance, the Jaeger-LeCoultre Grande Reverso Ultra Thin 1948 evoked a bit of the “same but different” vibe you’d expect from a watch with the same case dimensions and movement you’ve seen and handled so many times before. But after spending some time with it, the 1948 turns out to have a distinct flavor all its own. 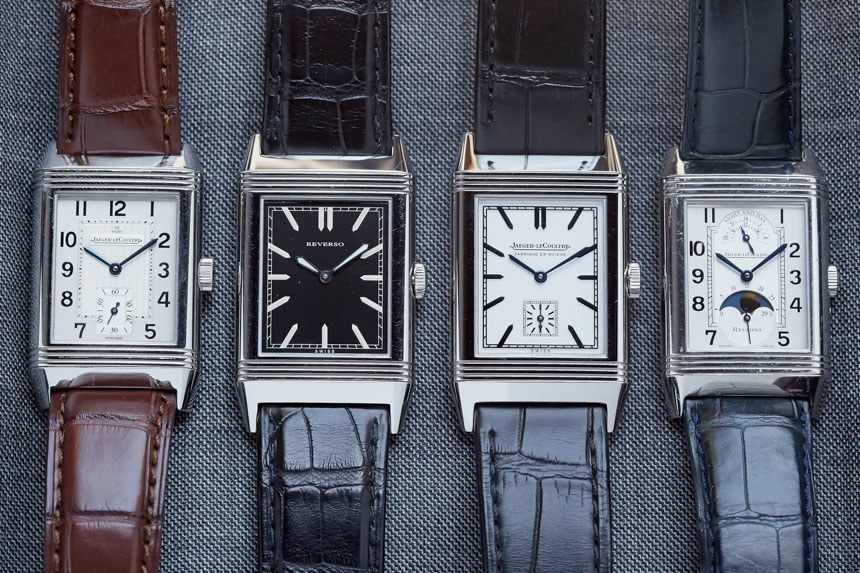 As far as the technical details are concerned, the Jaeger-LeCoultre Grande Reverso Ultra Thin 1948 is virtually identical to its predecessors in the Tribute collection. The steel case is their “Grande Ultra Thin” size, and is interchangeable with the Tribute To 1931 models, sized at 46.8mm in length by 27.4 in diameter, with a thickness of 7.3mm. As with the other pieces in the collection, water resistance is at an absolute minimum, with a 3 Bar rating. The Grand Ultra Thin case size was also used on the Boutique Edition Rouge and on the 1931 Chocolate (but in solid 18k pink gold).

The movement in the Jaeger-LeCoultre Grande Reverso Ultra Thin 1948 is the hand wound Calibre 822/2, as used in the 1931Chocolate edition, based on the standard Calibre 822 (used in the original steel Tribute To 1931 models), but with the addition of a subsidiary seconds feature. The movement has 19 jewels and a power reserve of roughly 45 hours. In my opinion, the use of a robust manual unit adds to the allure of the heritage-inspired Reverso line, and of course, keeps the case thickness to a minimum. 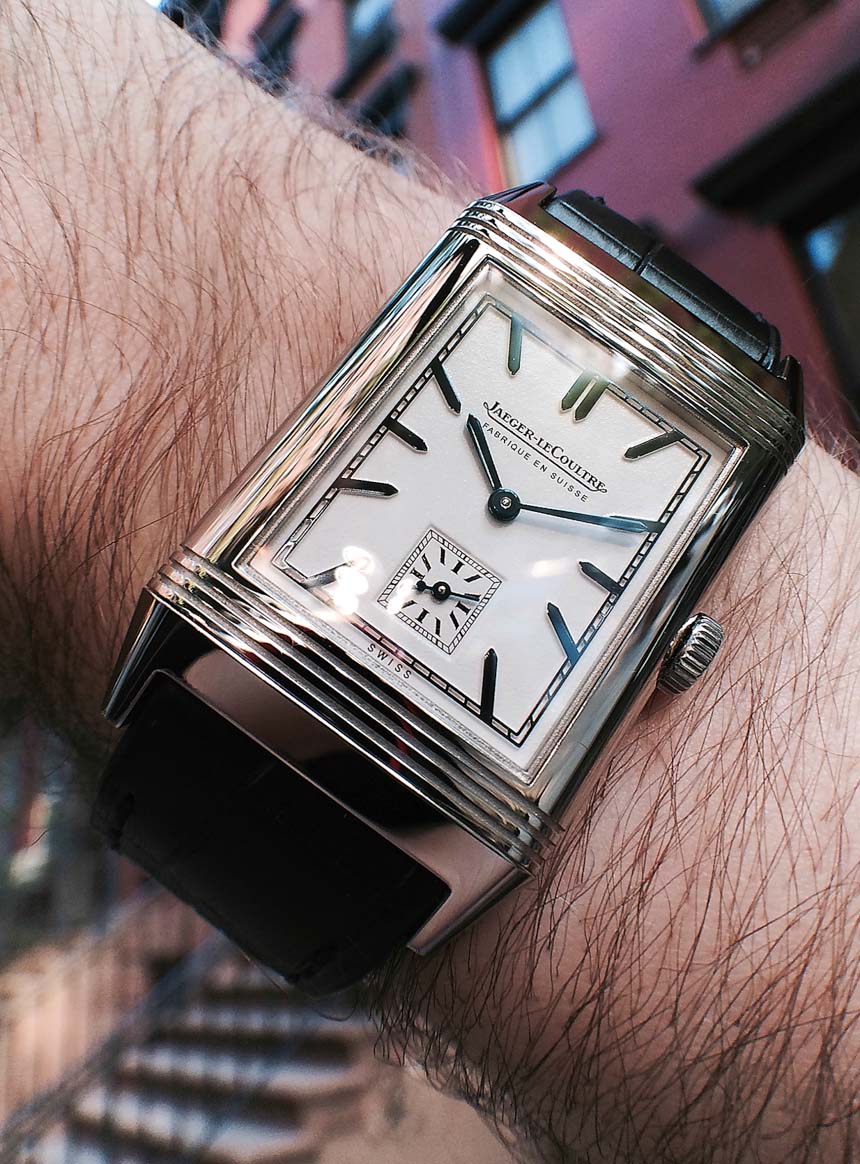 When you’re looking at a timepiece that uses the same case and movement as its predecessors, there can be only one possible differentiating factor: aesthetics. With the Jaeger-LeCoultre Grande Reverso Ultra Thin 1948, an entirely fresh dial and hands arrangement are used, and I found the result to be emotionally distinct from others in the collection.

In essence, the Jaeger-LeCoultre Grande Reverso Ultra Thin 1948 is crisp and bright, whereas the 1931 and Chocolate models have much darker elements to their design. Maybe it’s the benefit of 20/20 hindsight and a romanticized view of the past, but when comparing the 1931 to the 1948 in a historical context, I can almost feel a sense of foreboding with the earlier model, as if its dark design foreshadowed the despair and catastrophe that befell Europe at the end of the decade it emulates. 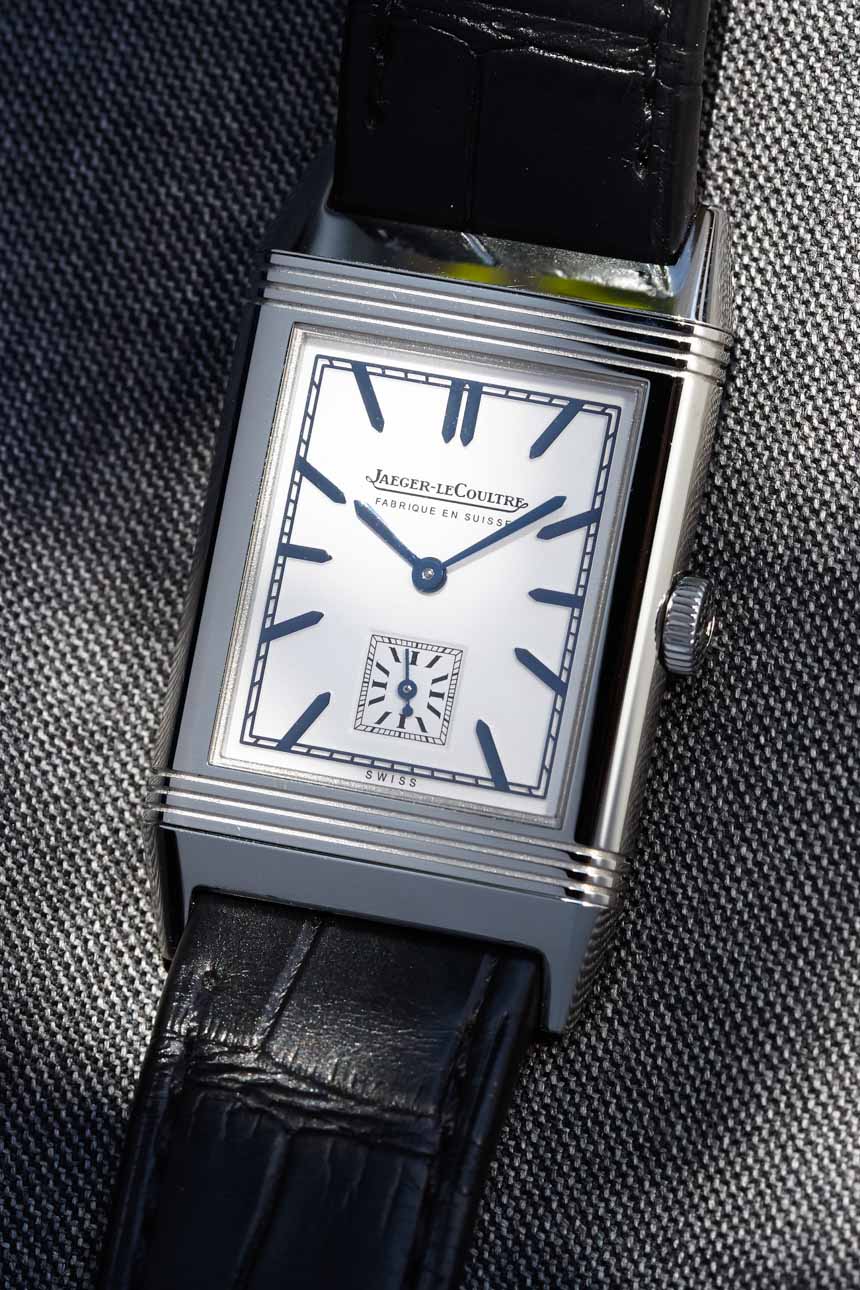 In contrast, the Jaeger-LeCoultre Grande Reverso Ultra Thin 1948’s silvered eggshell dial and blued steel bâton hands are bright and cheery, evoking the optimistic start to the 1950s, a decade of innovation, discovery, and baby boomers. The result is a very different vibe from the 1931 models, that lends itself well to pairing with brighter, crisper, and more modern apparel. Jaeger-LeCoultre has already released a Mad Men special edition Reverso, but quite frankly the 1948 is the example I would more expect to see on the wrist of Roger Sterling paired with one of his snappy suits.

As with its predecessors, the Jaeger-LeCoultre Grande Reverso Ultra Thin 1948 takes its design cues from a historical model, and features a distinctive script just beneath the Jaeger-LeCoultre signature, proclaiming, “Fabriqué en Suisse” (Made In Switzerland), same as the original. I cannot stress just how beautiful the dial layout is on this timepiece; the textured dial, deco elements, outer track detailing, and blued steel markers are simply superb, and the subsidiary seconds register adds a nice symmetry to the dial, as on the Chocolate. 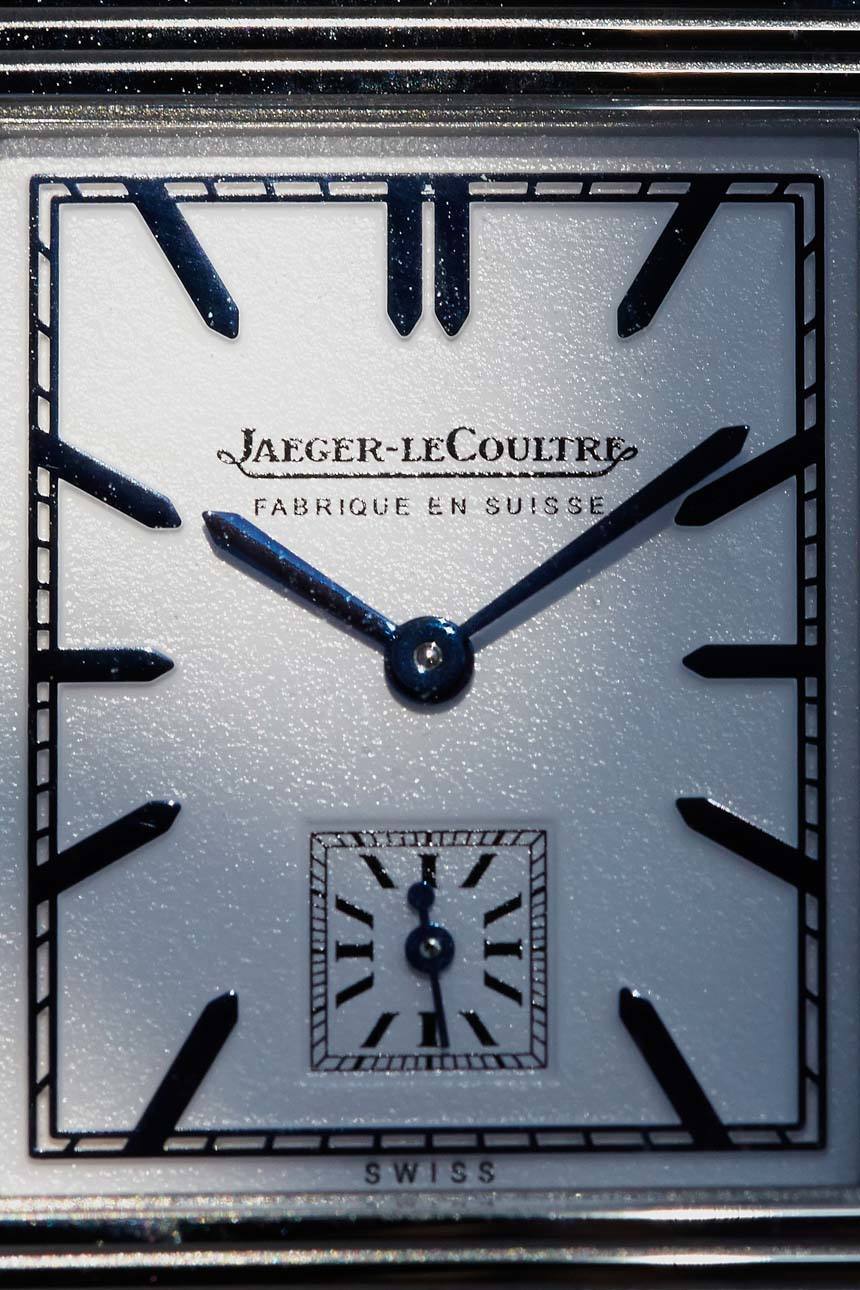 I have been fortunate to spend a fair amount of time with both modern and vintage Reversos in the past several years, and this latest edition, regardless of the emotional connection it might suggest to the individual wearer, is another fantastic piece I’d be proud to have in my personal collection.

Jaeger-LeCoultre’s continuation of their Reverso line continues to impress me, and acts as an exception to my general disdain for “special edition” timepieces, which are often just a regurgitation of the same old stuff over and over again. Unlike so many other manufactures that draw from their archives, Jaeger-LeCoultre really derives its inspiration from the emotional elements of watch design, not just the architecture. A great amount of thought and care clearly goes into the development of each piece, and they seem to nail it each time. 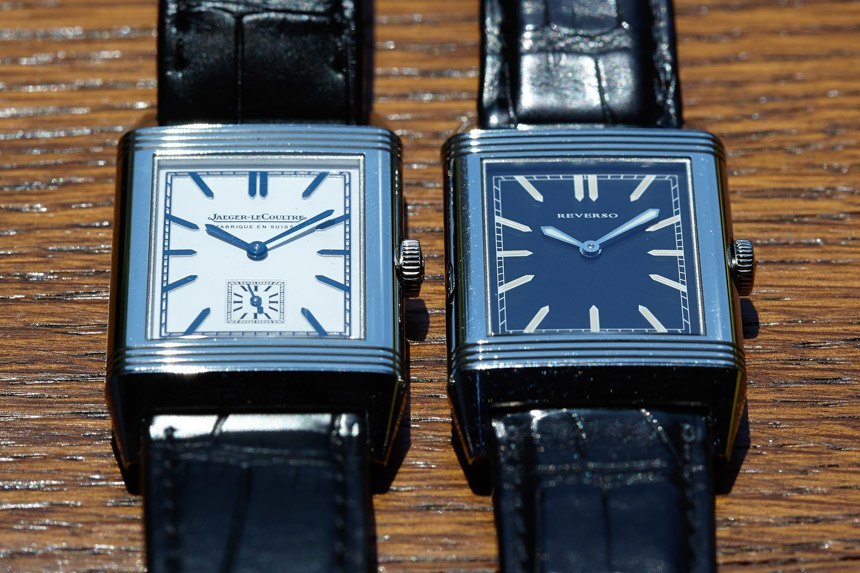 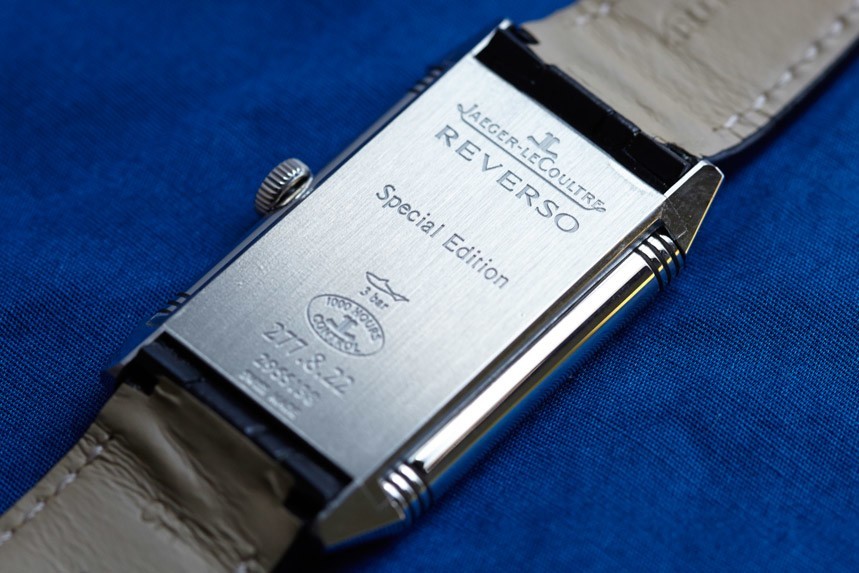 The Jaeger-LeCoultre Grande Reverso Ultra Thin 1948 is a great addition to the heritage Reverso collection, and manages to effectively convey the emotional X-Factor that will undoubtedly persuade collectors to buy more than one timepiece from the same collection. The subtle variations to dial design are perfectly highlighted in this collection, and I, for one, would have a hard time picking just one. The Jaeger-LeCoultre Grande Reverso Ultra Thin 1948 is available as a Boutique Edition only, and is priced at $9,450. jaeger-lecoultre.com