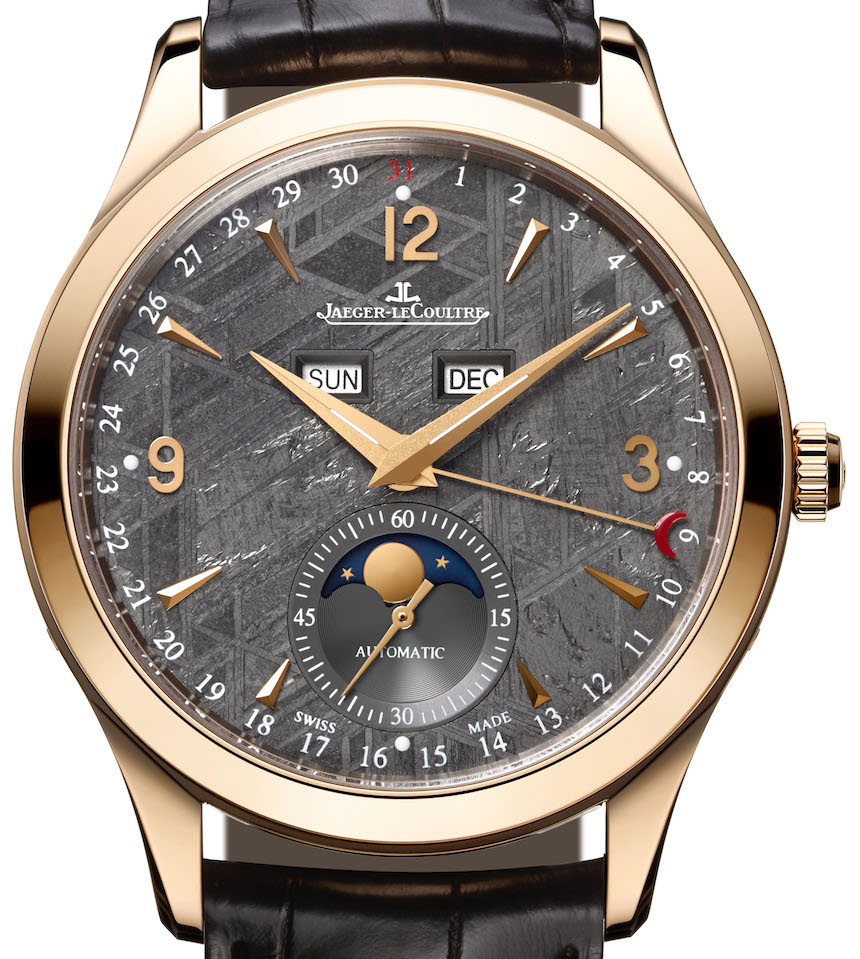 It was at SIHH 2013 that Jaeger-LeCoultre presented its Master Calendar, a highly legible calendar watch that was inspired by a similar model the manufacture made around 1945. It offered the date, day, month, and phase of the moon indications on a nicely laid-out and, indeed, very restrained-looking dial. Two years later, for SIHH 2015, we are seeing an updated version that more-or-less does away with the clean looks, the Jaeger-LeCoultre Master Calendar Meteorite Dial. 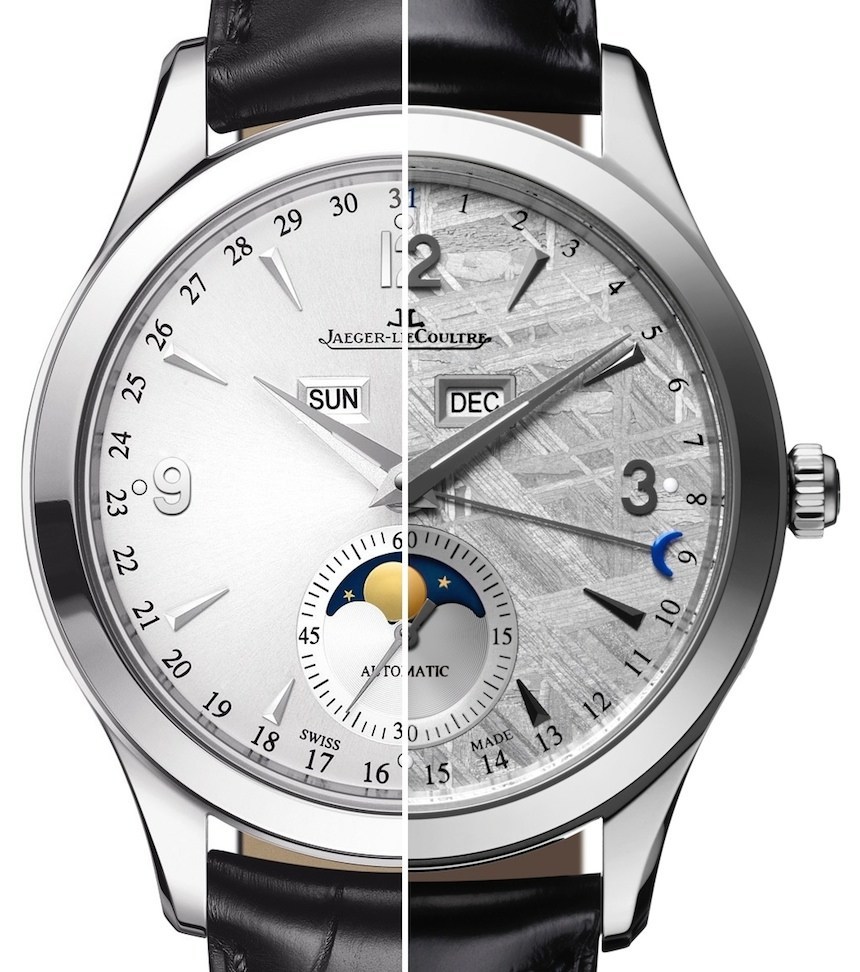 An almost completely renewed look: The original SIHH 2013 release with its more restrained dial is seen to the left, while the new model to be debuted at SIHH 2015 with a meteorite dial is on the right.

The Jaeger-LeCoultre Master Calendar Meteorite Dial remains in its 39 millimeter wide case. For those intrigued by its design and array of complications, but not necessarily by precious metals, it will be good news that both the original and the 2015 versions are available in pink gold and steel. Regardless of case materials, both 2013 models came with a silvered, “sunray-brushed” dial – certainly a very restrained canvas for the conservatively (and elegantly) styled dial, with its small day and month apertures, running seconds and moon phase subdial at 6 o’clock, made complete with the central date.

That changes quite radically with the meteorite dial: the barely visible pattern of the original silver-colored dial is replaced with abstract geometric shapes, the result of a myriad of tiny bumps and scratches spread out all across the surface of the dial. That is due to the inner structure of the meteorite stone, and the texture of no two dials are the same. 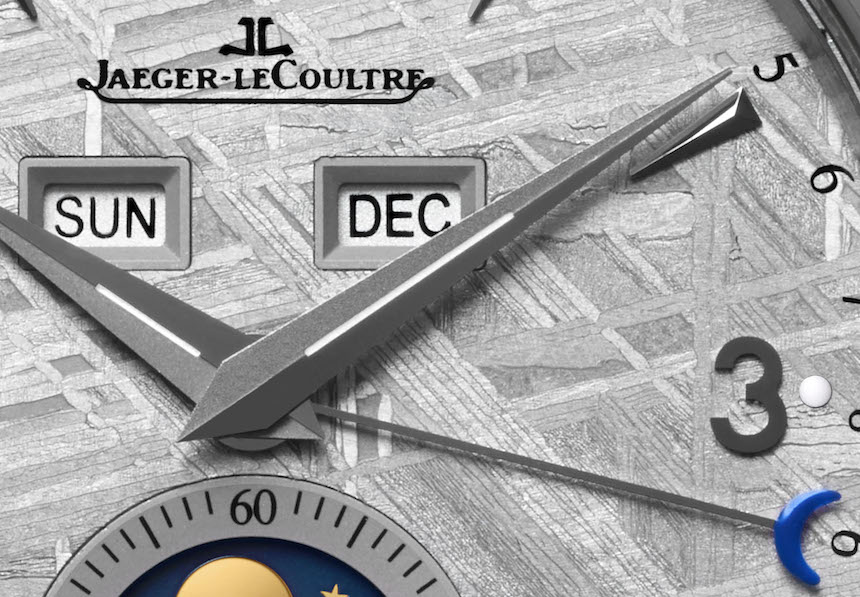 A little research beyond Jaeger-LeCoultre’s official documentation for this new release reveals that most meteorites that have fallen upon our planet originated within the so-called Asteroid Belt, which lies between Mars and the Jupiter. As a result of collisions between these elements, the resulting fragments have left the Asteroid Belt and, some happening to cross our planet’s path. When that happens, these particles of different sizes hit the Earth’s atmosphere at thousands of miles per hour, causing the absolute majority of these pieces to burn away completely and never reach the surface.

Jaeger-LeCoultre notes that while many of the greatest meteorite finds have happened in Antarctica, the continent is now an exclusive preserve of scientific meteorite hunters, and commercial exploitation is prohibited. Therefore, the raw material for the dials of the new Jaeger-LeCoultre Master Calendar Meteorite Dial had to come from somewhere else, and in this case, the rock was discovered and officially registered in Sweden, and it, in fact, originated from the Asteroid Belt. 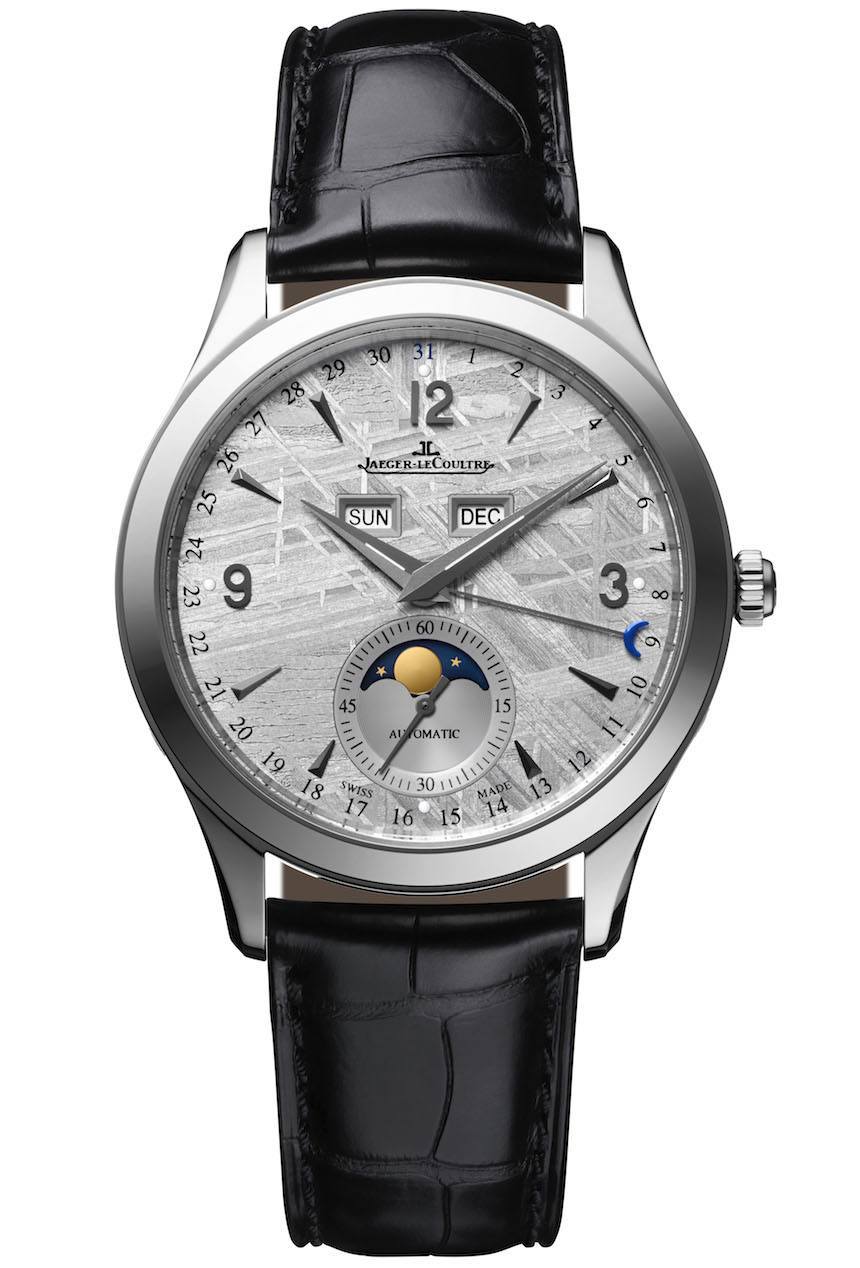 Dials are crafted from a single block of stone: the block is cut up into thin slices – which will, of course, serve as the dials – and then the texture of the revealed surfaces are further treated to help emphasize their unique patterns. Although no two dials are the same, the brand says that they check every piece to ensure they all have the same aesthetic properties – a mandatory measure, as there surely are pieces of meteorite which are disposed of for their less interesting or uniform textures.

While this is not the first time we are seeing a major high-end brand use meteorite for its dials – the white gold Rolex Daytona springing to mind as another more interesting offering – it sure is fascinating to see this novel (and perhaps timeless) material find its way into such an elegant model of another highly refined Swiss brand. The result certainly is a mixed bag, in a sense that some will like the idea of the added depth and “action” to an otherwise rather conservatively styled piece, while others will arguably dislike it for the same reason. 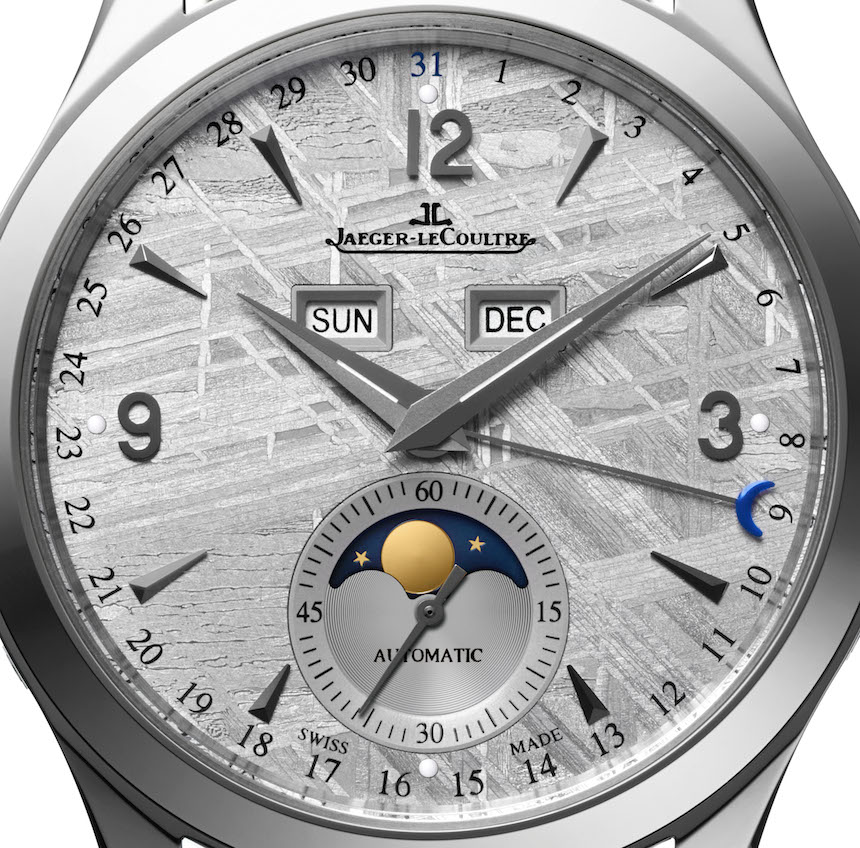 Either way, using such a seldom seen material for the dial certainly is a more creative way of creating a re-edition of a recently released model than what we are used to seeing, such as the addition of another precious metal or a slightly updated color scheme. As a direct consequence of this more unusual modification, we feel safe saying that the Jaeger-LeCoultre Master Calendar Meteorite Dial is a most welcome addition to the Master Control line of watches.

The movement remains the same manufacture Cal. 866 that offers the aforementioned functions, automatic winding and 43 hours of power reserve. Official pricing is unavailable until SIHH 2015 commences, but the original pieces cost $11,300 in steel and $24,300 in pink gold, and we expect to see a 1-3 thousand dollar premium for the versions with meteorite dials. jaeger-lecoultre.com