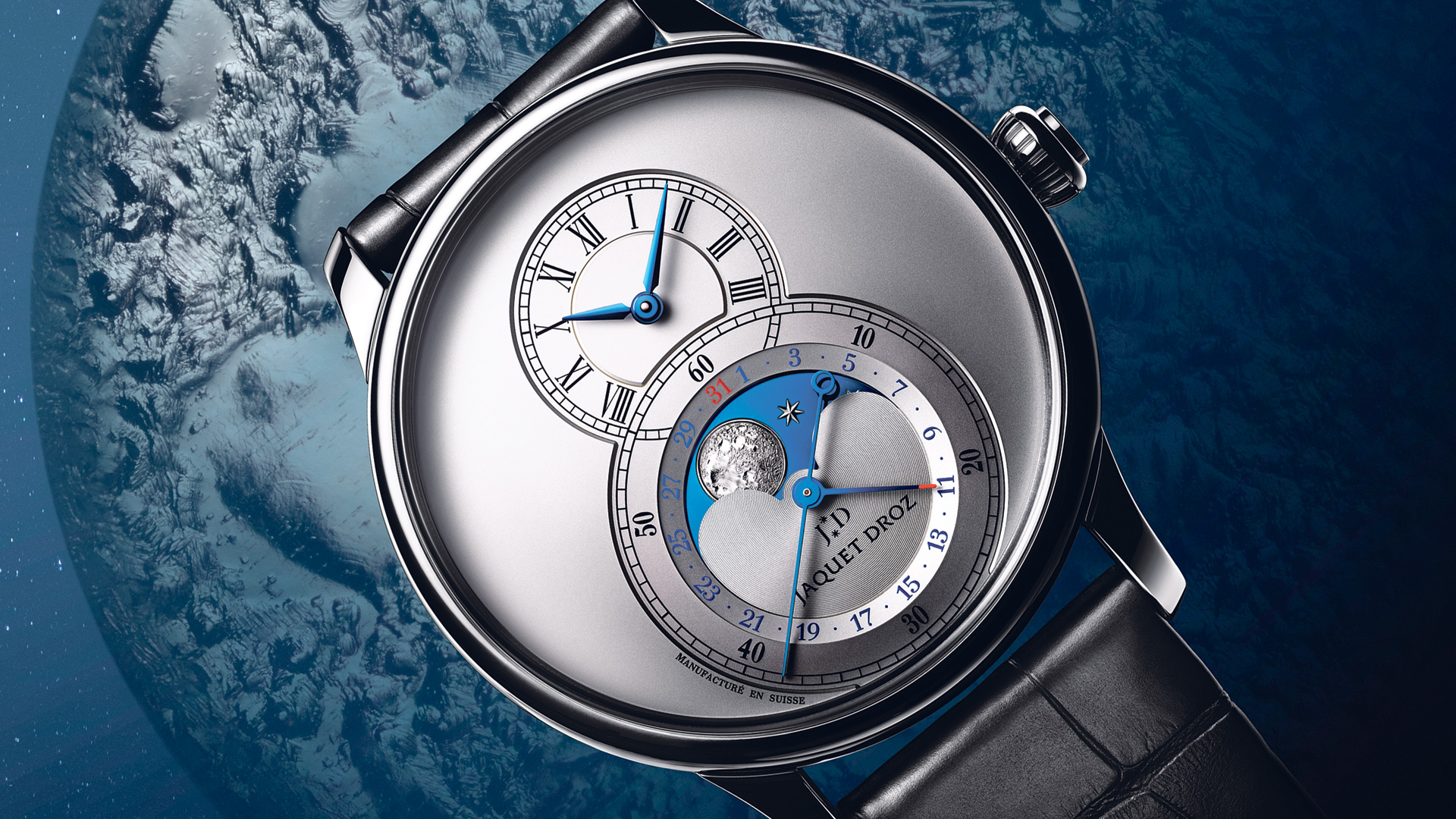 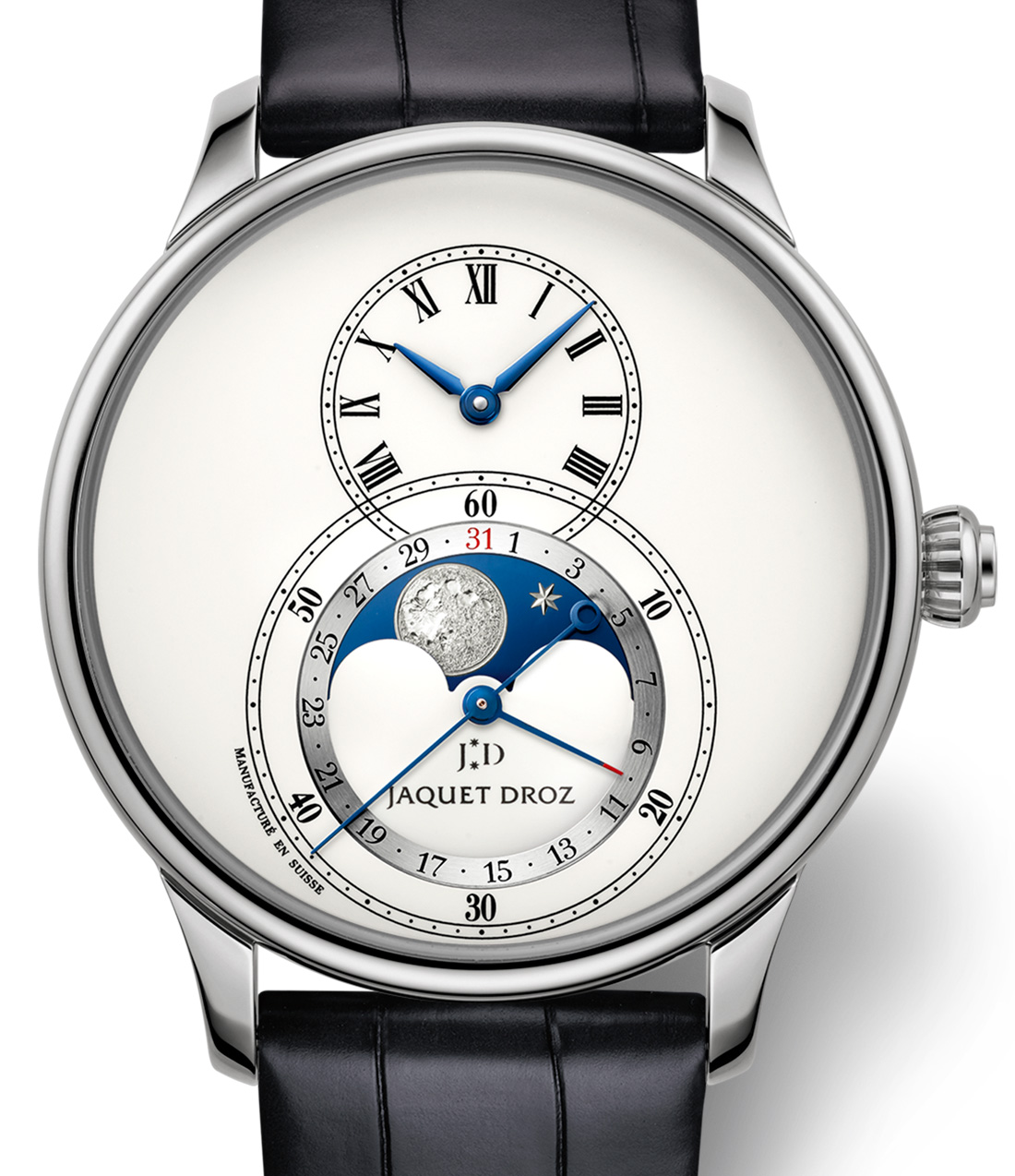 The moon phase complication is constantly described as “romantic” and “poetic,” so what could be more appropriate to balance the negative space that characterizes Jaquet Droz‘s minimalistic Grande Seconde collection than a serene, realistic moon? The Grande Seconde features the “figure 8 dial” that probably most strongly represents the Jaquet Droz brand for many. While it has been the canvas for various iterations and complications, and other collections of course feature moon phases, the Jaquet Droz Grande Seconde Moon emphasizes this increasingly popular complication. These new versions for 2018 are just as striking as the first models introduced in 2017, but they now offer more styles as well as size options. 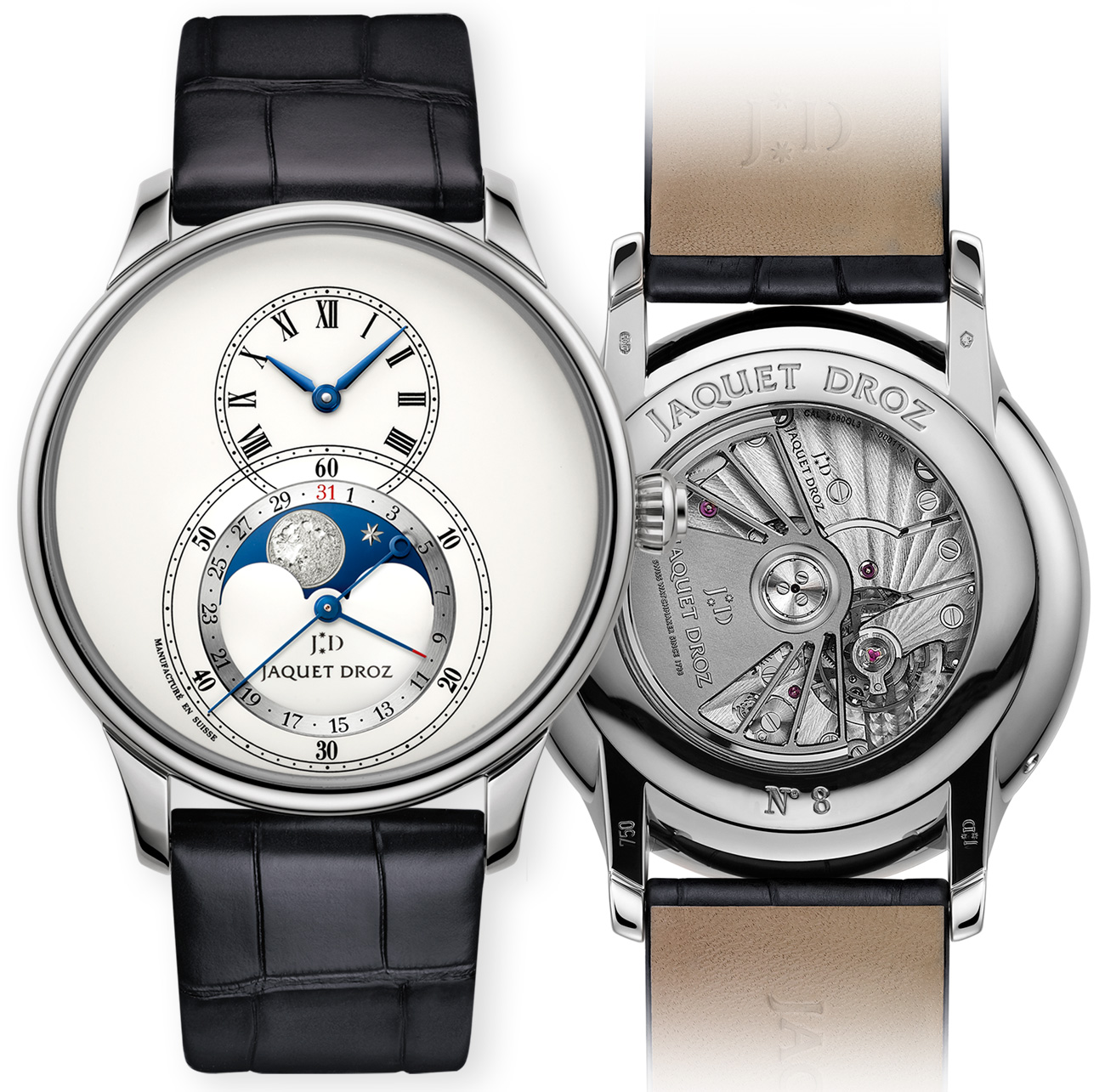 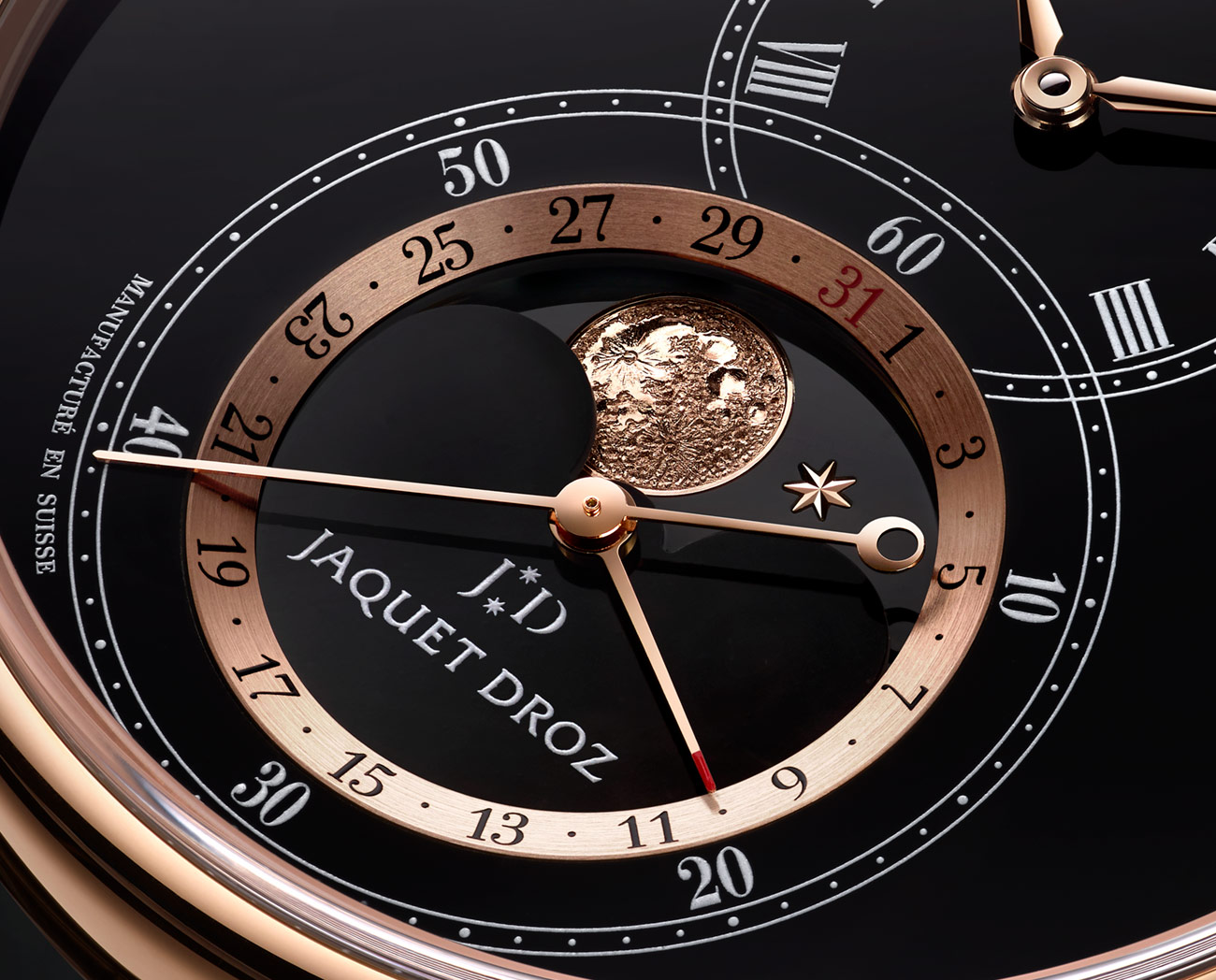 It seems that the moon phase so often gets discretely tucked into a tiny sub-dial somewhere, and that can be enjoyable as a subtle treat, but it’s also nice for fans of the complication to see it more accentuated. And the larger (“grande”) seconds sub-dial it is integrated into gives it some more room to stretch out, even while incorporating a date display indicated by the red-tipped hand. It might not be something like the lovely but relatively in-your-face Arnold & Son HM Perpetual Moon, but Jaquet Droz has incorporated the moon phase display in a prominent and yet, in my opinion, still elegant and restrained way. 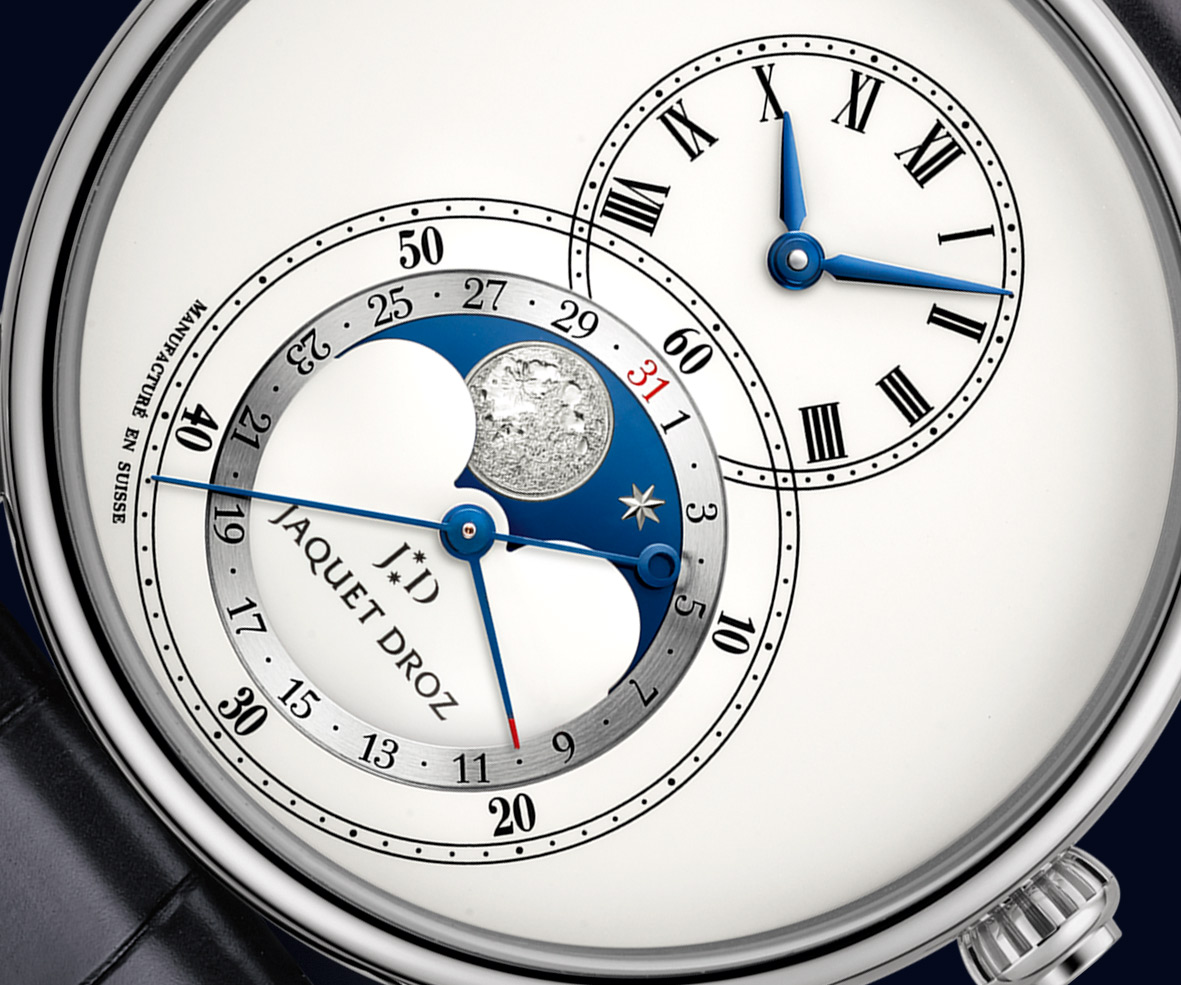 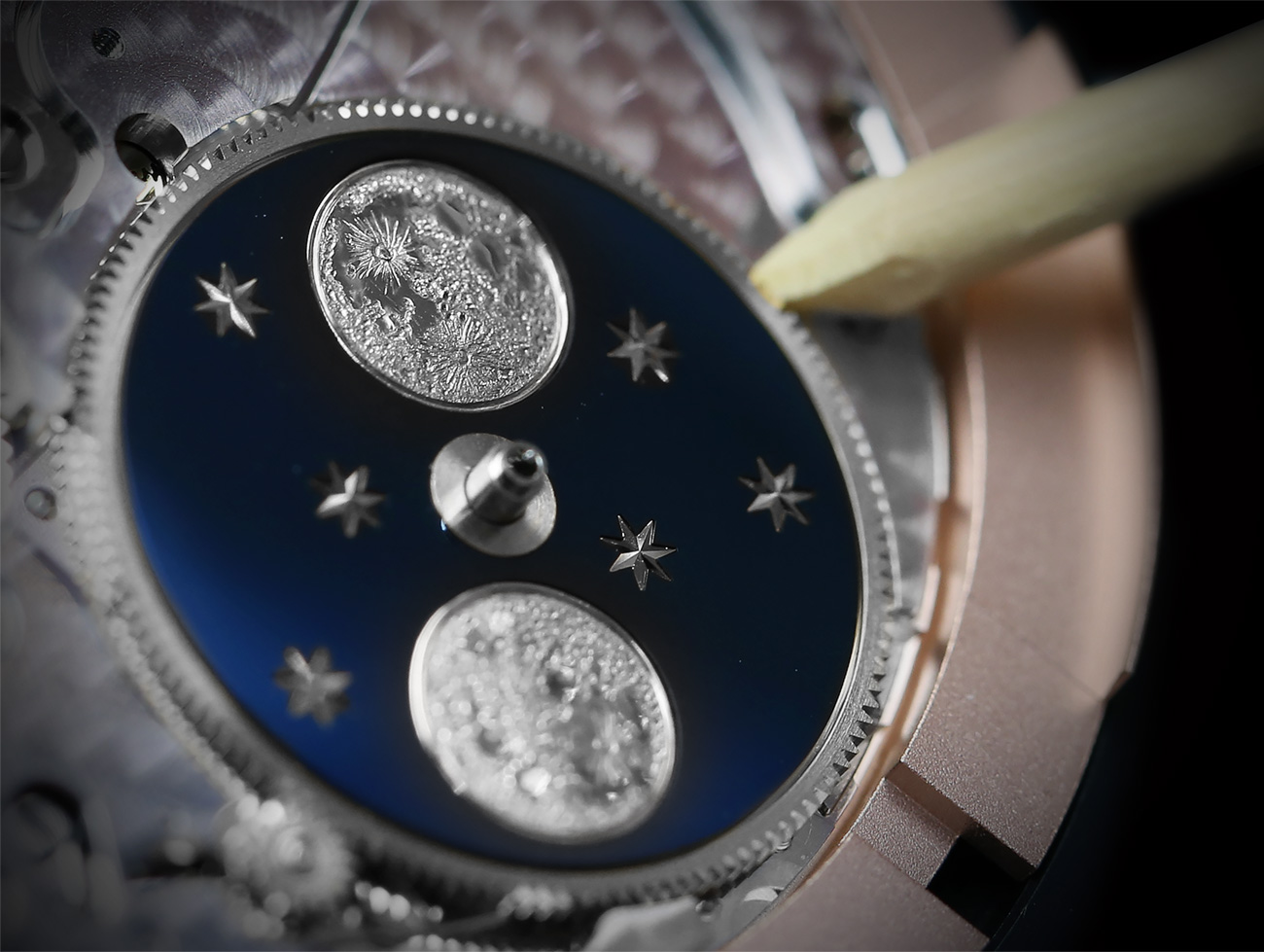 The Jaquet Droz Grande Seconde Moon originally came in three versions in 43mm cases, and in 2018 they are joined by four more: two in 43mm and two versions in 39mm. The most basic model from 2017 in terms of materials was a 43mm model in steel with an opaline dial. For 2018, that model is matched stylistically by a similar design in white gold with a white Grand Feu enamel dial, also at 43mm, as well as a 39mm version in steel with an opaline dial. These relatively conservative and simple designs, with a thin bezel allowing for an even wider dial, wear rather prominently at 43mm – though, to be fair, that is what some people want when spending this kind of money. Others, however, will surely appreciate the new 39mm size. Also joining the collection for 2018 are two dark-dialed versions: one in red gold with a black Grand Feu enamel dial at 43mm, and a somewhat more feminine one in steel at 39mm with a diamond-set bezel and aventurine for the dial and moon phase disc. 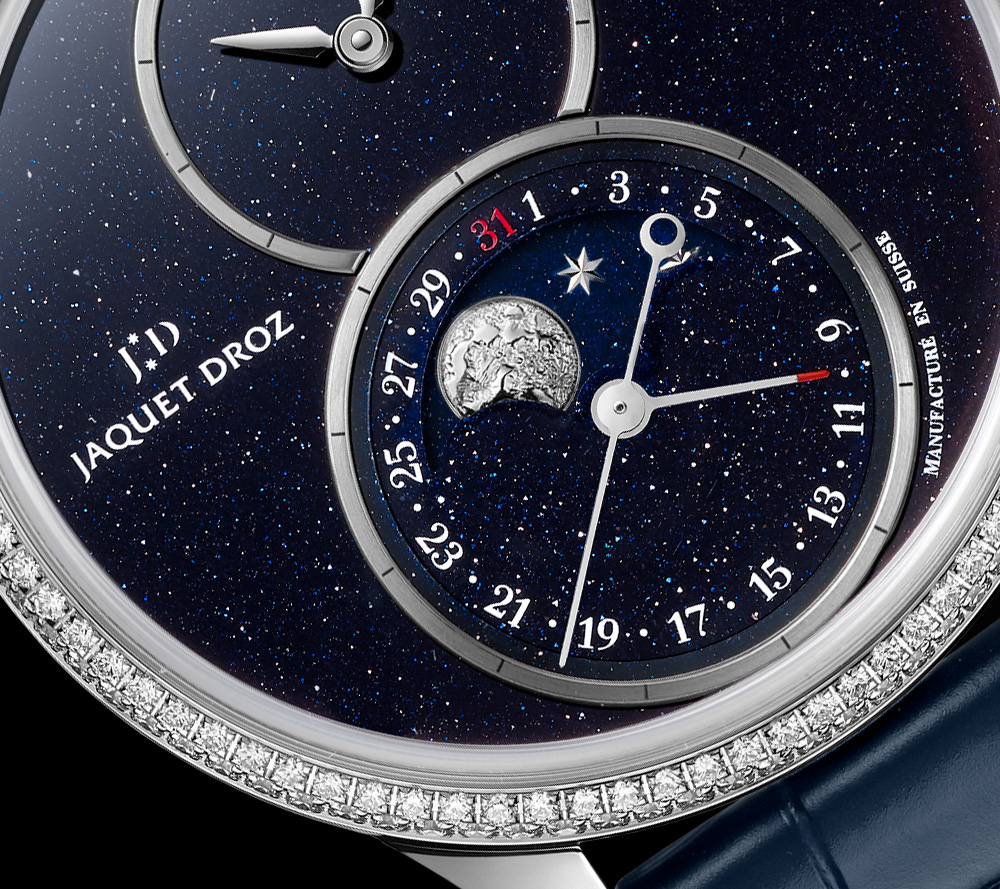 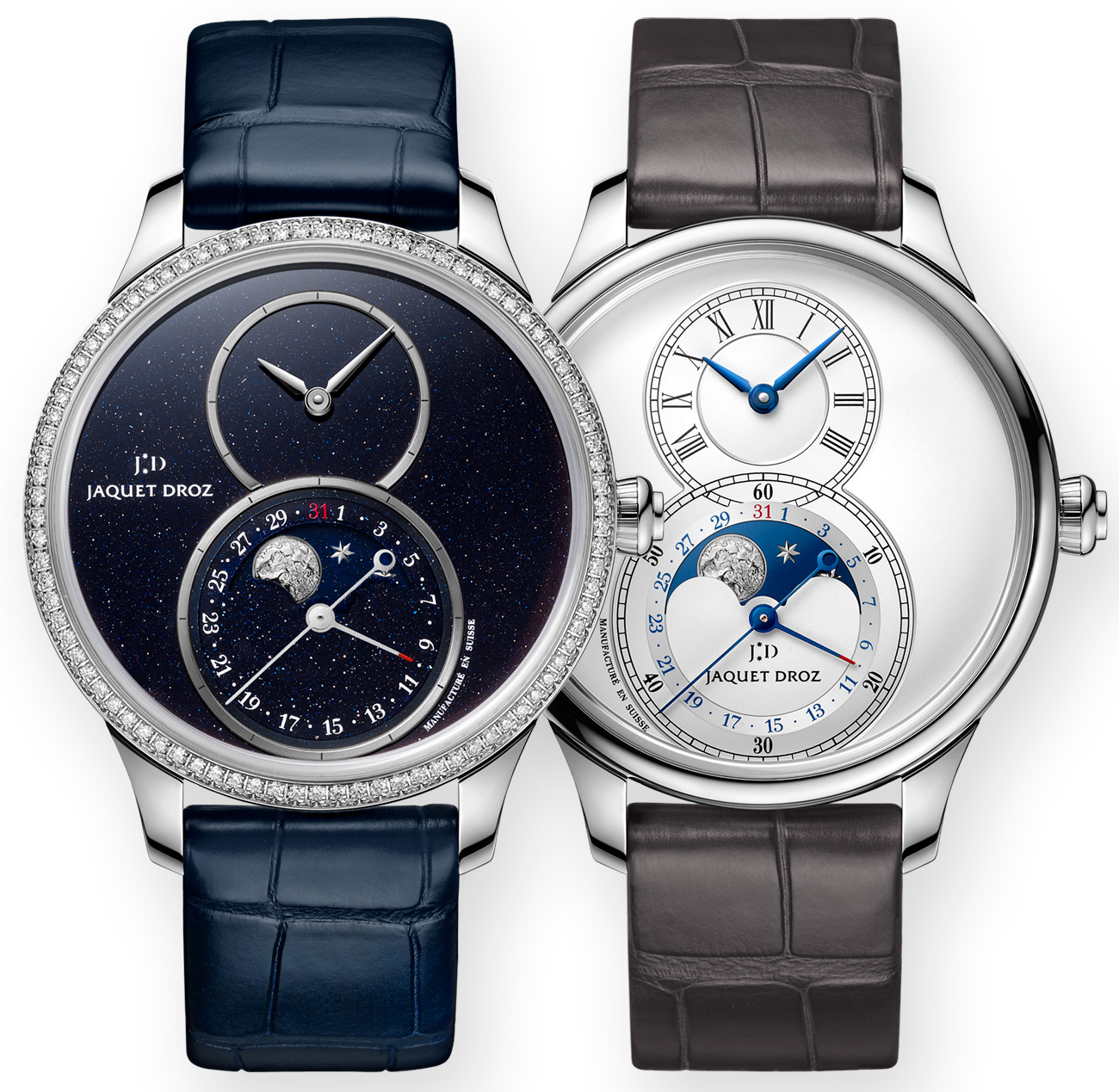 I don’t have the exact measurements, but it looks like the 39mm versions’ displays are roughly the same size as on the larger versions but with space shaved off the dial’s perimeter. The resulting proportions might even be better on the 39mm version, for my taste. The case of the 39mm version is imperceptibly thicker at 13.45mm than the 43mm version’s 13.23mm thickness, though the movement is the same. Visible through an exhibition caseback, the Jaquet Droz 2660QL3 automatic movement features an off-centered radial finishing that is echoed in the 18k white gold rotor’s design. If you look closely, you will also be able to see the balance spring and pallet horns, which are made of silicon. Silicon has a number of beneficial properties for watch movement parts such as these including wear-resistance and being impervious to magnetic fields, though they are more difficult and expensive to produce. The Jaquet Droz 2660QL3 has a power reserve of 68 hours via two barrels and operates at 4Hz. 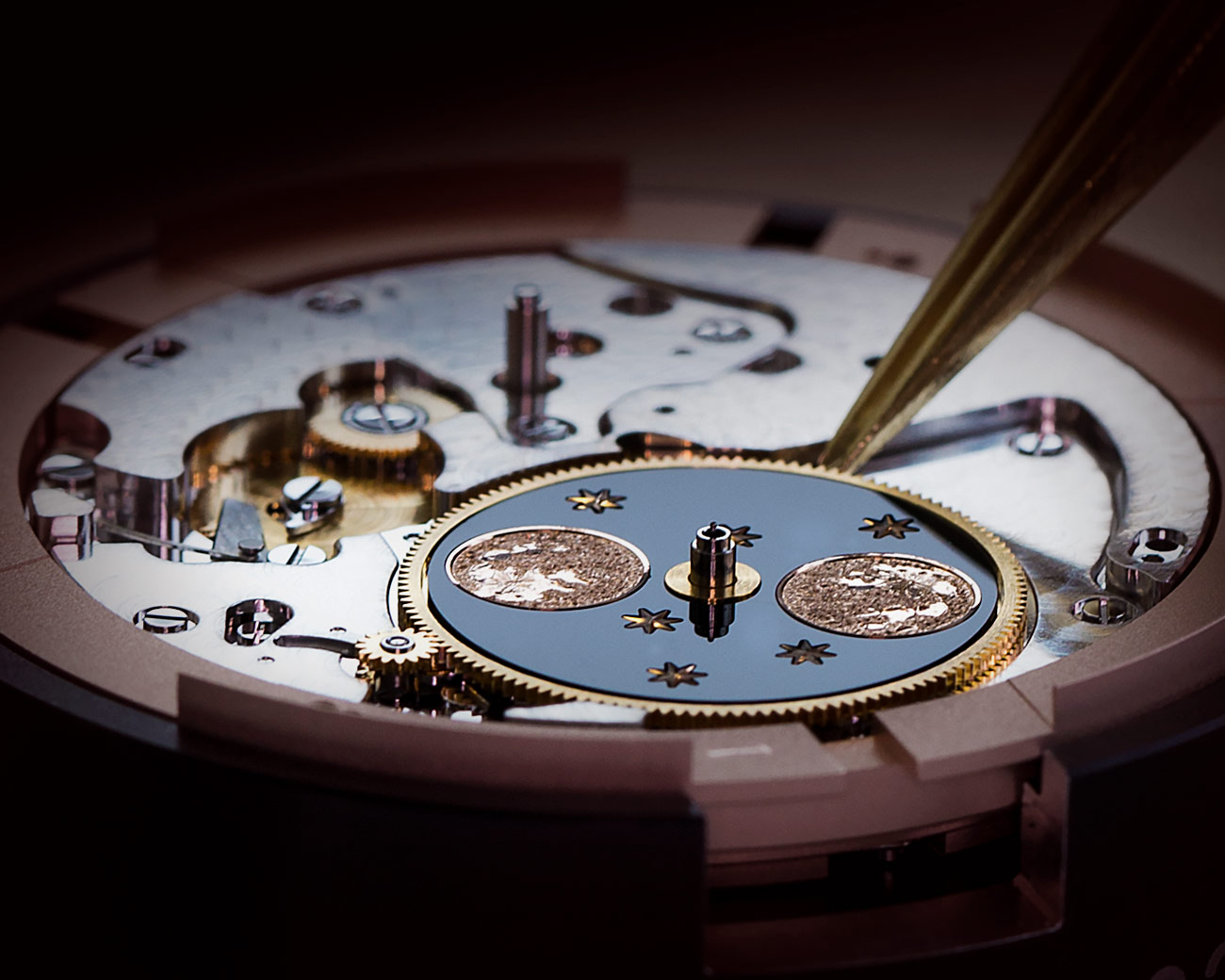 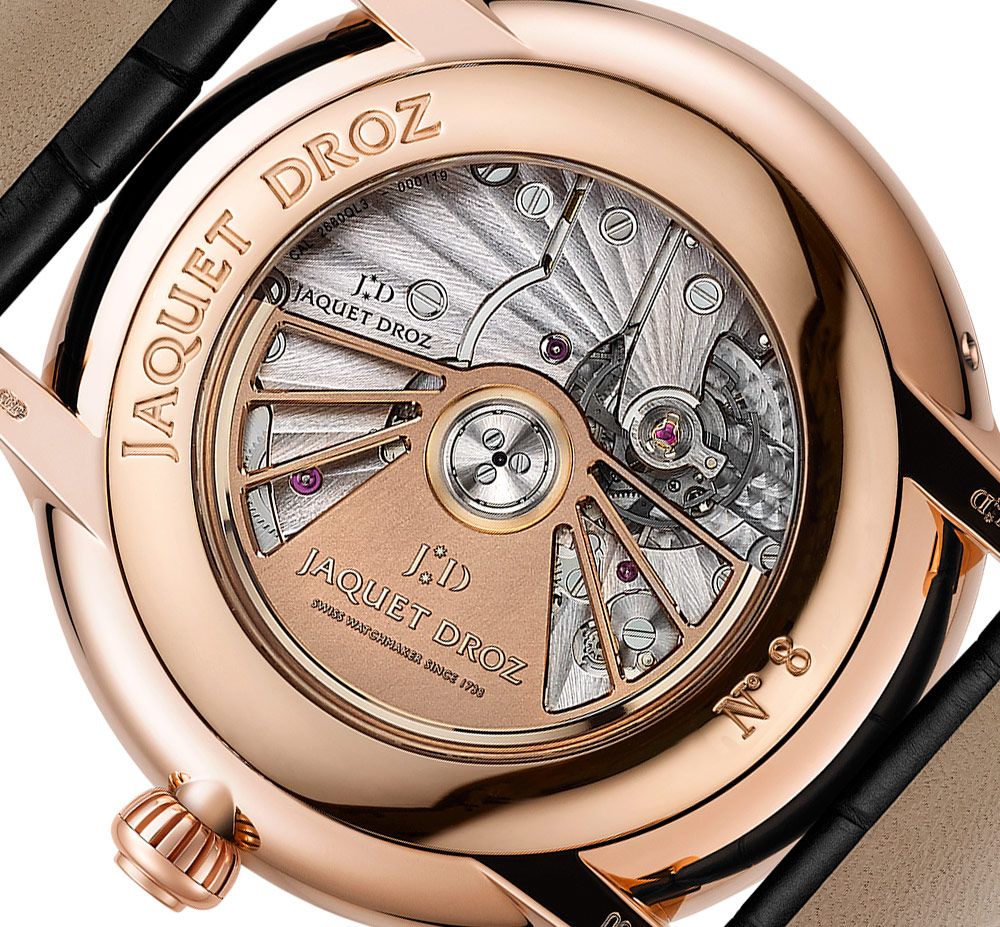 Both the 43mm and 39mm sizes of the Grande Seconde Moon use the same 2660QL3 movement with an in-house-developed mechanism for the moon phase. Like many higher-end moon phase watches, the Jaquet Droz Grande Seconde Moon’s moon phase display only needs adjusting for one day every 122 years, theoretically. This is apparently achieved by Jaquet Droz’s “Mechanism 135” which is a “high-precision” wheel with 135 teeth to more accurately reflect the moon’s cycle of precisely 29 days, 12 hours, 44 minutes, and 2.8 seconds. This is as opposed the traditional wheel with only 59 teeth that needs correcting every two years and eight months. The 122-year moon phase of the Jaquet Droz Grande Seconde Moon watch is adjusted via a discreet corrector on the case side around 8 o’clock. 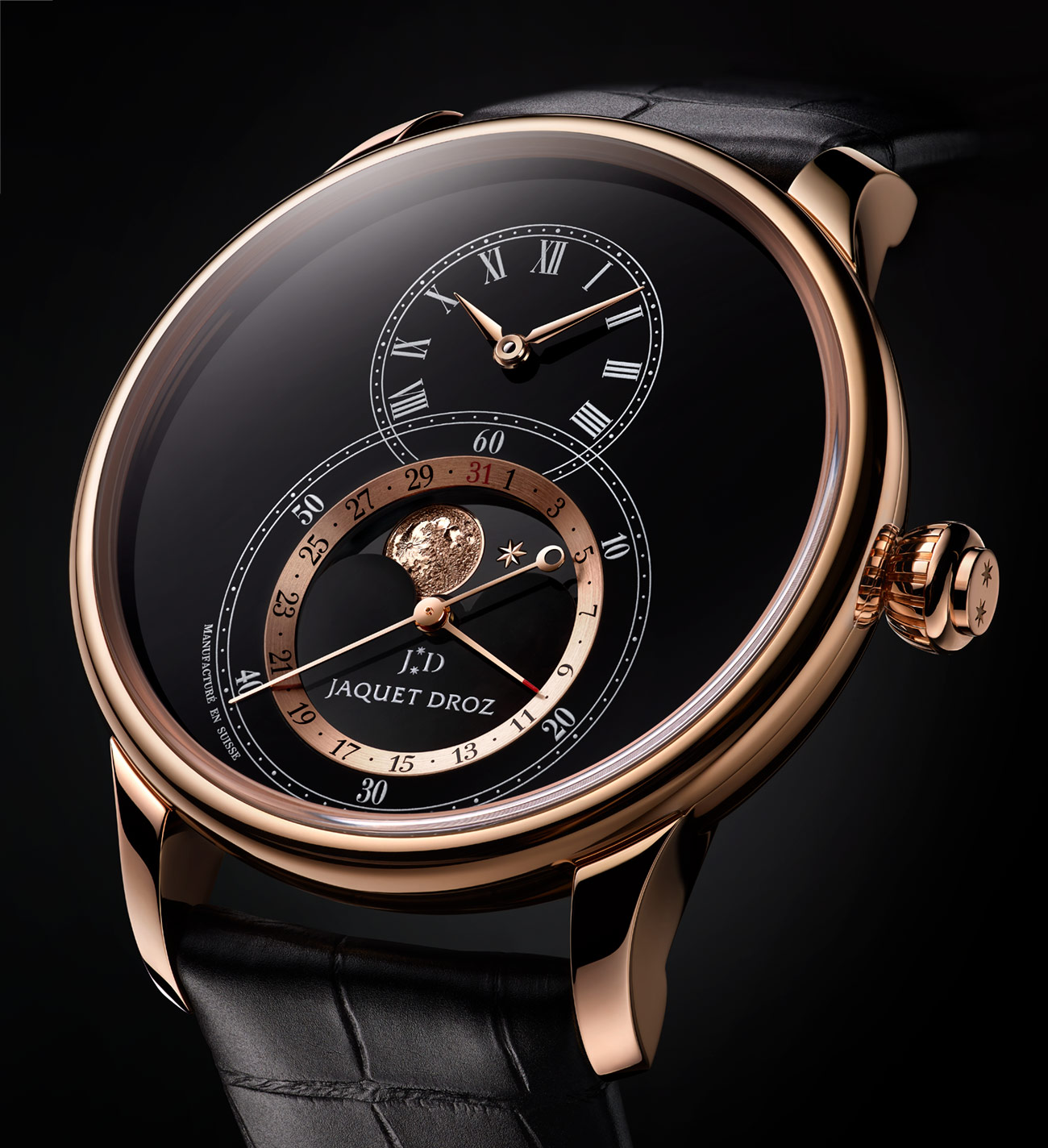