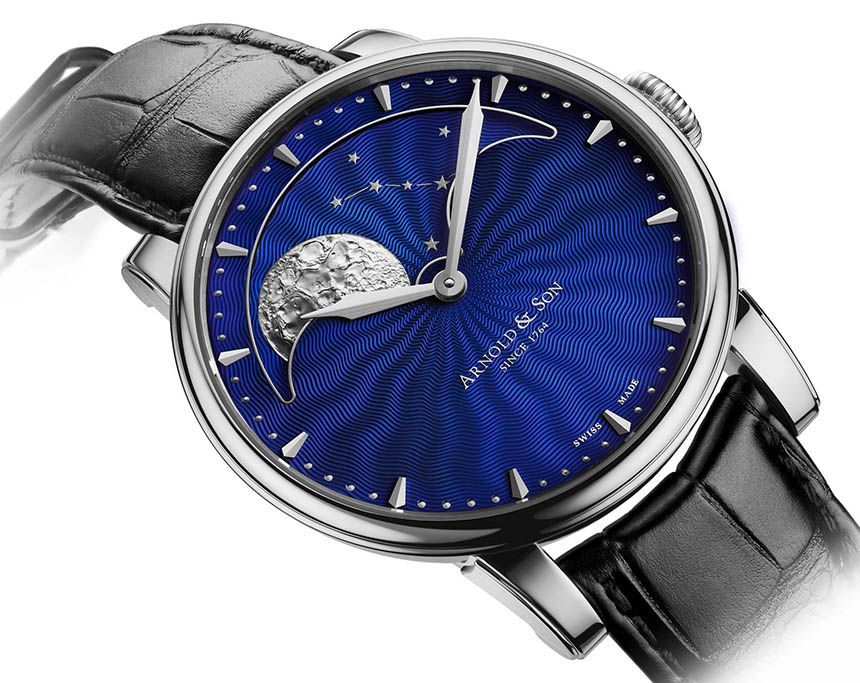 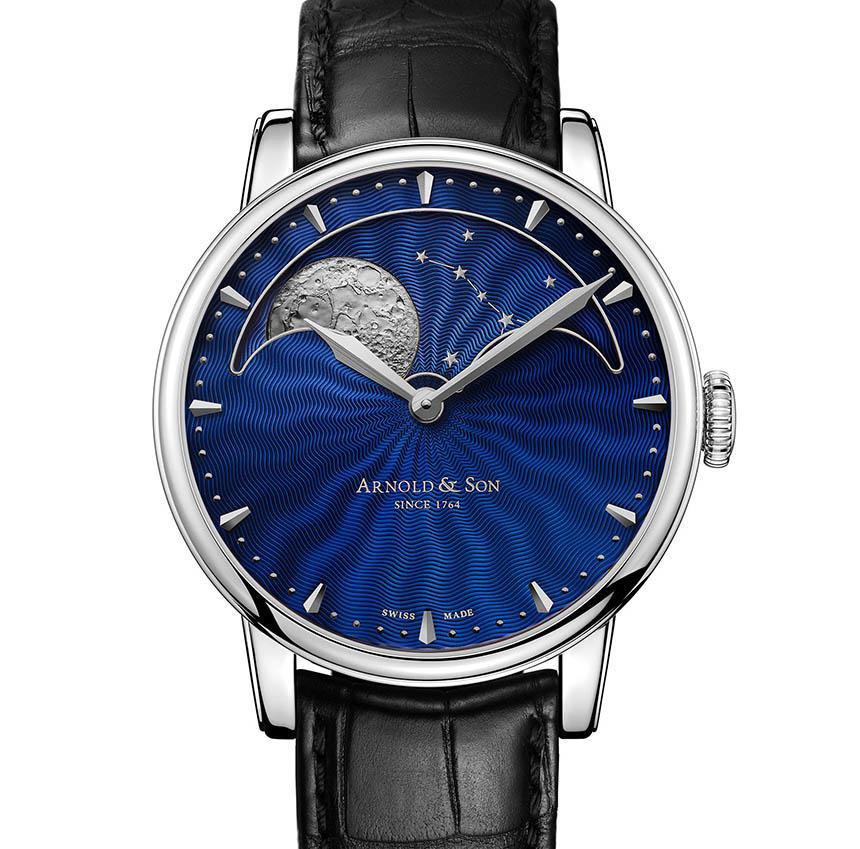 Though a young brand, Arnold & Son is responsible for some memorable watches we have seen over the past few years. The wonderful Time Pyramid watch (reviewed here) as well as the Arnold & Son HM Perpetual Moon watch come to mind in particular. Now, a new version of the latter in stainless steel with a blue guilloche dial and blue guilloche moon phase disc has been announced. The shade of blue seems to be the same bright and deep blue as the red gold model, and the large moon and its accompanying stars are silver. It’s a great mix of colors that recreates the feeling of looking up on a moon on a cloudless night. 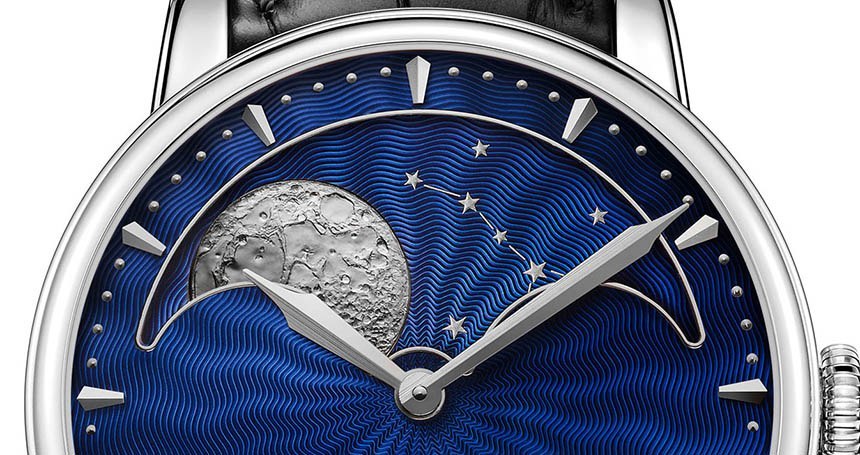 When the Arnold & Son HM Perpetual Moon watch was announced, the red gold with blue guilloche dial variant was the one that stood out most for me. The bright and deep blue of the dial is simply mesmerizing, especially when it’s juxtaposed with the gold moon. Unfortunately, because of its precious metal case, that meant this particular variant has a high price. Arnold & Son has a stainless steel variant, but that came with a black guilloche dial with a silver moon, which, although is a better approximation of what the moon would look like in the night sky, is just not as vibrant as the blue. 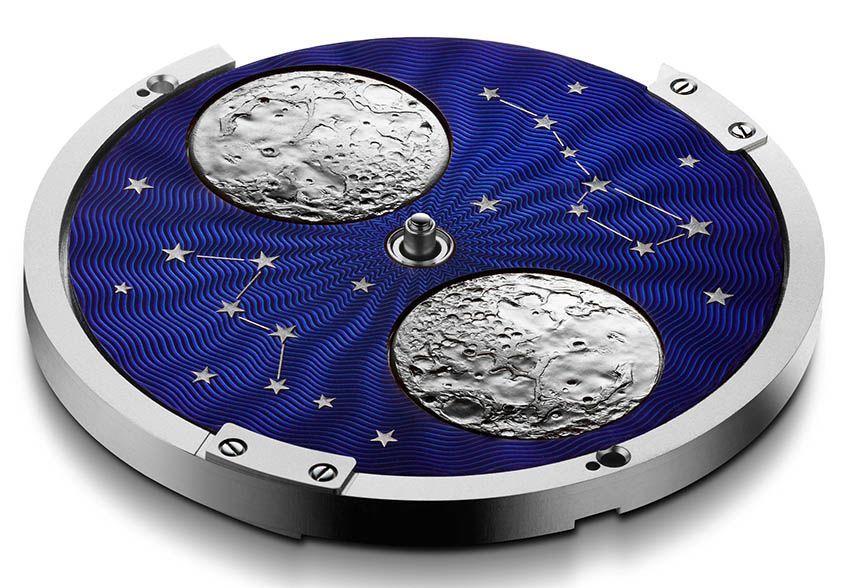 Most moon phase watches usually make do with just a small aperture for the display. The Arnold & Son HM Perpetual Moon watch, however, goes all out and offers its owner a large display of the moon with a large moon phase aperture that stretches from 10 to 2 o’clock and a moon phase disc that measures a whopping 29mm. The diameter of the moon alone, in case you were wondering, is 11.2mm. It’s also worth mentioning at this point that the moon itself looks very realistic because it was made from an initial hand-engraved model that has been duplicated for series production. The large moon phase display also never feels overwhelming because the case is a very modern 42mm in diameter. In all, the large moon phase display and the contemporary size of the case makes for a very harmonious overall look. 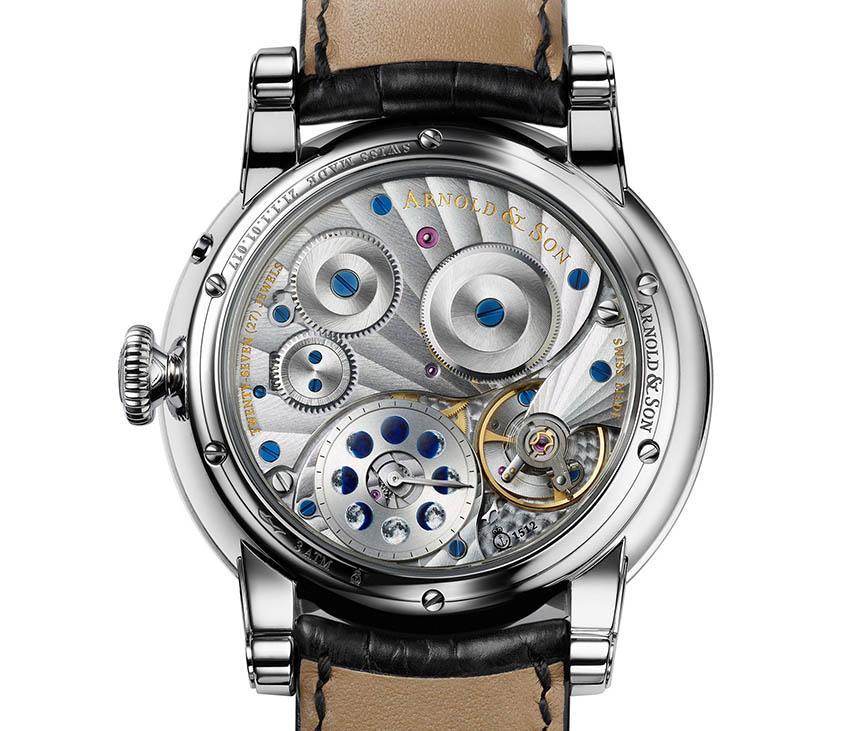 Underneath, this new Arnold & Son HM Perpetual Moon in stainless steel with blue guilloche dial watch is powered by the in-house-made hand-wound caliber A&S1512, which can be admired through the sapphire caseback. This particular caliber was created from the ground up to display the moon phase, and as a result, it is extremely accurate – to the tune of one day every 122 years. After 122 years, a single push on the corrector will sync the moon phase indication for another 122 years.

The 3Hz caliber A&S1512 also features double barrels which give it a power reserve of a very respectable 90 hours. The movement is also decorated to a very high standard and features manually chamfered bridges with polished edges, circular graining on the wheels, flame-blued screws, mirror polished heads and Côtes de Geneve finishing on the bridges. And as if the large moon phase display on the dial isn’t enough, there is also an eight-stage indication of the moon phase on the rear of the movement.

All things considered, this new version of the Arnold & Son HM Perpetual Moon watch is a fantastic choice for those who want a classically styled watch with a twist. It comes with a choice of a hand-stitched black or brown alligator leather strap and it is priced at $17,200. arnoldandson.com