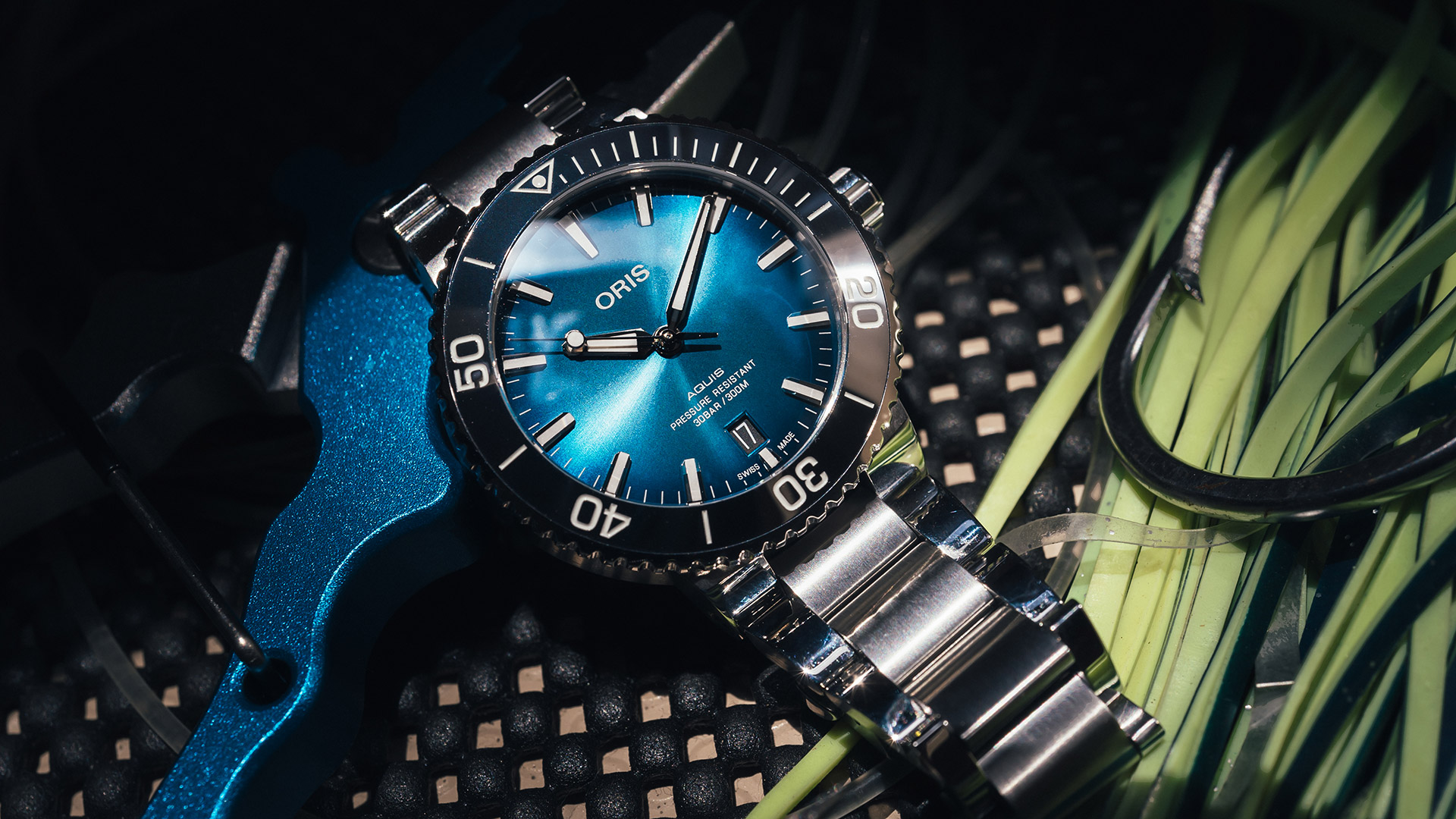 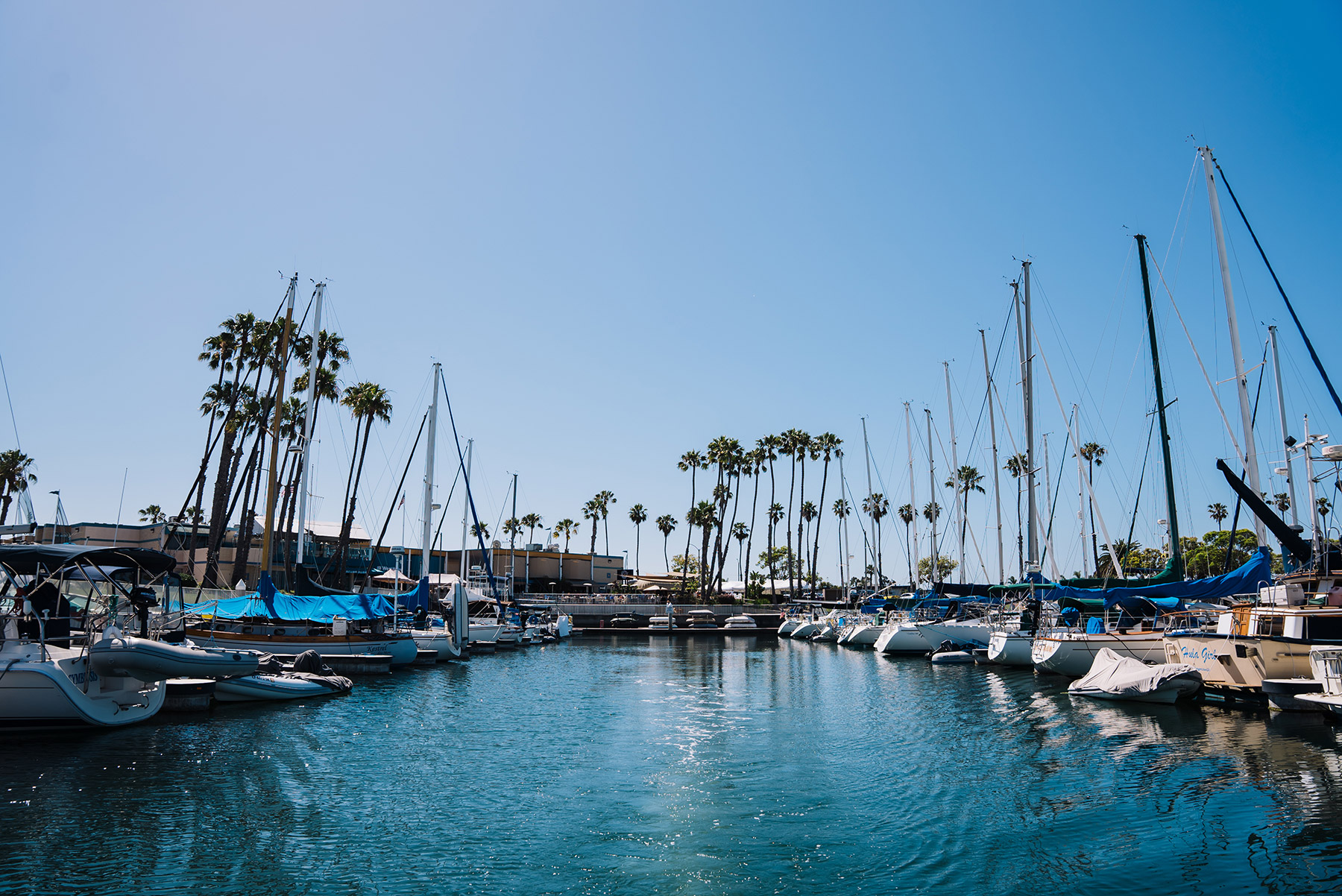 It’s a Thursday morning in Southern California, and like most days here, it’s a balmy one. Five of us are having breakfast overlooking the boat slips at Alamitos Bay Marina in Long Beach, the water in the harbor glimmering with the kind of promise that only California sunshine brings. Rows of boats sit neatly lined along the pier, their masts gently nodding back and forth in agreement that yes, the extra spicy Bloody Mary I just ordered will indeed be giving me heartburn exactly one hour from now. My friend Jay is seated facing the water, black diner mug in hand. He takes a slow sip of coffee and casually glances towards his cabin cruiser boat moored 30 yards from our table. It’s a fleeting but telepathic exchange between a pilot and his chariot as Jay declares cheerfully, “It’s going to be a good day on the water.” Whether that’s directed to himself or the group, I’m not entirely sure, but either way, the rest of us grunt in the affirmative in between bites of pancakes and Tabasco-doused omelets. After all, it’s hard not to be excited about heading to Catalina Island for a long weekend of camping and offshore fishing. We finish up our breakfast and stroll leisurely down the gangway to Jay’s boat. With our gear stowed and checklists checked, Jay settles into the captain’s chair. I glance at my watch; it’s 11 am. The sky is a soft powder-blue, and a scattering of fluffy clouds float lazily by, clearly operating on California time. Jay’s right — it is going to be a good day on the water. “It’ll be about an hour by boat to Catalina,” he advises us as he hits the ignition. And with a smirk, he adds, “Hope you don’t get seasick.” 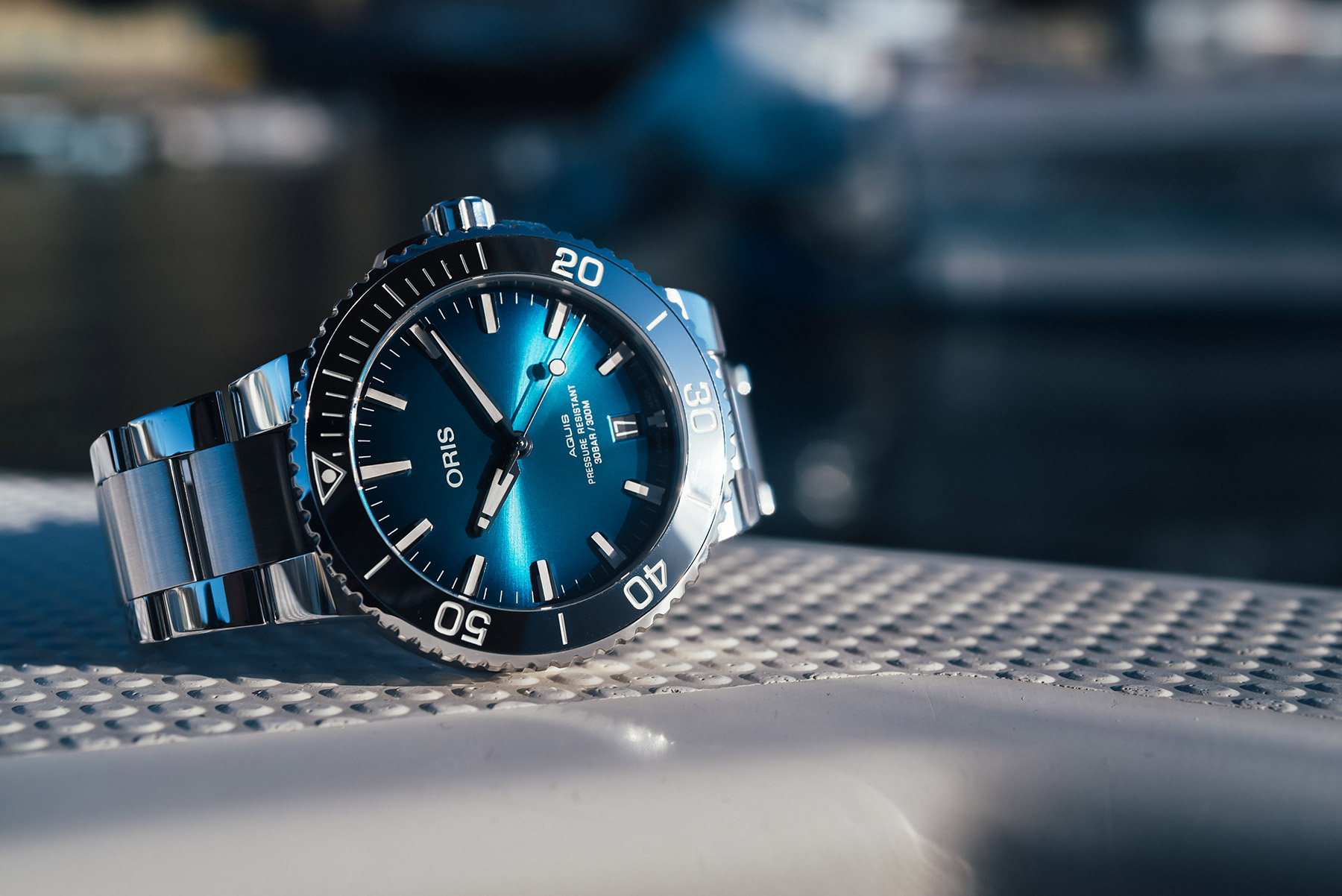 It’s easily been over a decade since I last visited Catalina Island. It’s not for lack of proximity: Catalina is barely 25 miles off the coast of Long Beach. And it’s certainly not for lack of natural beauty, as one would be hard-pressed to find a more quintessential example of Southern California ecology, with a mild Mediterranean climate for most of the year, hilltop ridges lined with chaparral, and, of course, sweeping ocean views. The actual, if not utterly-LA, answer is that somehow there always seems to be something else to do and somewhere else to be. But it’s not difficult to get to Catalina once you put your mind to it; it’s marginally more involved than transiting through your average international airport. Most people get to the island by way of a daily harbor-to-harbor passenger ferry. Otherwise, taking out a private boat like Jay’s is another common option, though the difference in vessel size-to-wave ratio tends to offer a rather more adventurous ocean-traversing experience.

The waves are particularly choppy today, each one hitting the bow of the boat like a neverending Thanksgiving Day parade of speed bumps. I immediately regret my Bloody Mary, as well as the rest of my breakfast, in general. Judging from the fact that we’ve just passed the 30-minute mark on my watch’s timing bezel, we’re probably about halfway to Catalina, which also means I’m still only halfway done with being seasick. I’m wearing the Oris Aquis Date 39.5 for this trip, which, I know — a dive watch out on the ocean is hardly a novel decision. But I chose this particular piece both for its aqua-inspired dial and also to put its relatively uncommon tungsten bezel through its paces. Oris officially calls the dial color a “Gradient Ocean Blue,” though much like how the waters off the coast of Catalina are just a little greener than not, so goes the dial of this Aquis. In direct sunlight, especially, the sunburst dial renders itself a mesmerizing deep aquamarine. 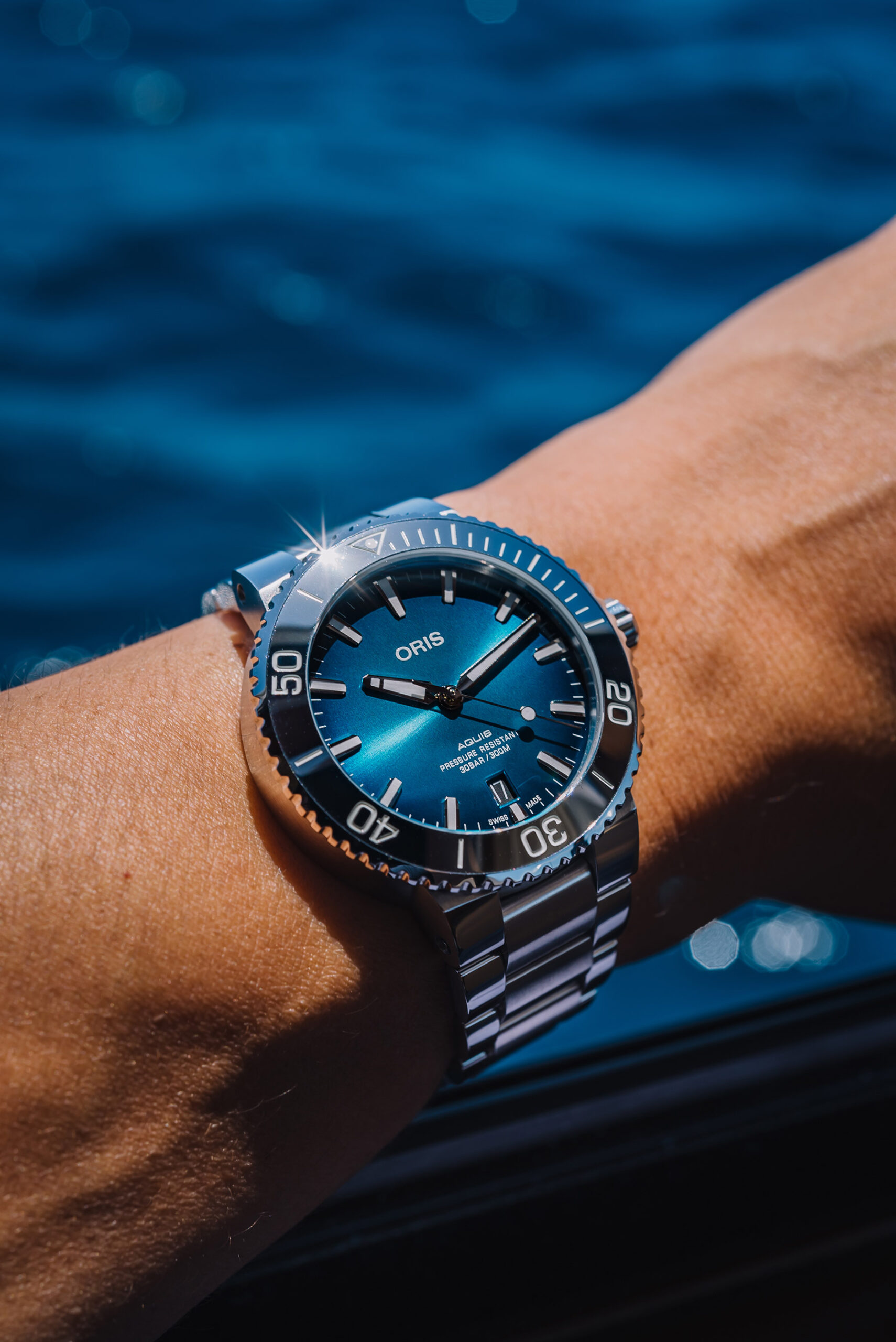 Oris has done an excellent job in recent years with its nature-inspired dials for the Aquis collection, most notably through a series of limited-edition releases dedicated to the preservation of various bodies of water around the world. The Carysfort Reef, Lake Baikal, and Hangang versions of the Aquis are a few examples that come to mind, each of those pieces sporting dials that are visually representative of their namesake locales. And while the Aquis Date on my wrist does not have a specific conservation tie-in, its bluish-green dial certainly is a proper match for the small stretch of the Pacific I currently find myself traversing. 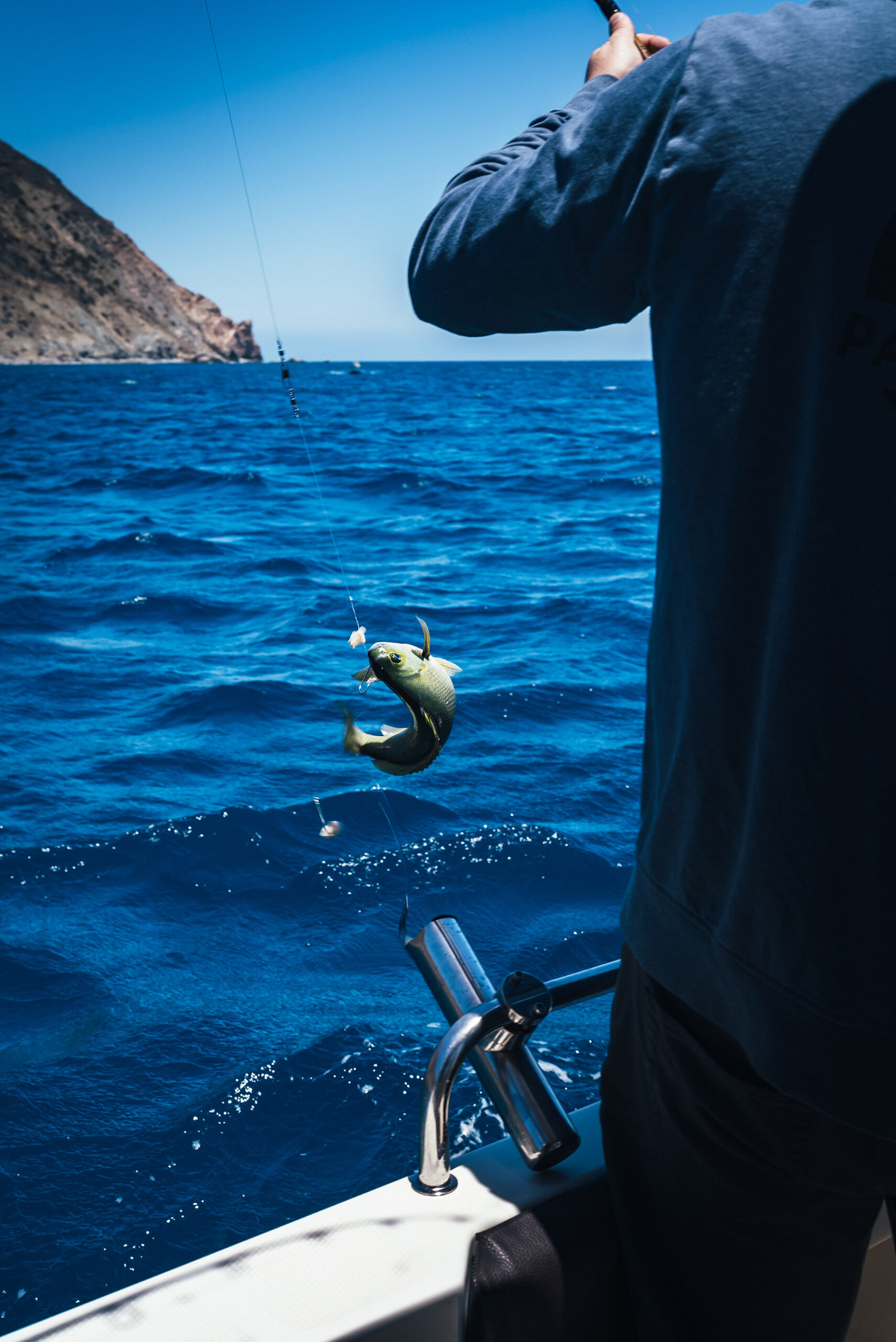 Jay pulls his boat into Two Harbors, the smaller and westernmost of Catalina Island’s two main population centers. We’ll split our time over the weekend in the waters between here and Avalon Bay to the southeast. I’m excited to be fishing again for the first time since I was a child. Back then, I’d gone just enough times to have my own pole and know the basics of baiting and how to cast a proper line. But that cursory knowledge has long since retreated into the dustiest corners of my brain, leaving me a fishing neophyte once again as I stand in the stern of Jay’s boat, pointing to the rod in my hand like a Neanderthal and asking Jay, “How do?” Luckily for me, he’s a patient teacher, and easily the most knowledgeable fisher in our group. Over the course of the next few days, the five of us cast line after line, our fingers permanently infused with the smell of the squid we’re using as bait. I’d forgotten about that sudden flutter of excitement that comes when you feel that invisible tug on your fishing line and see the tip of the rod bend down toward the water — it’s a live one! You start to reel in your line, already thinking about a clever Instagram caption for the photo you’re proudly going to take with your fresh catch, only to pull up a tragically empty hook. The fish that could’ve been yours is now swimming away somewhere, belly full of bait, and almost certainly laughing at your amateur fishing skills. But despite the fish that got away from us, we ended up with a pretty decent collective weekend haul of perch, sheephead, rockfish, opaleye, and sculpin. Most of what we caught, we released, but a few we kept for dinner. Who’s laughing now, fish? 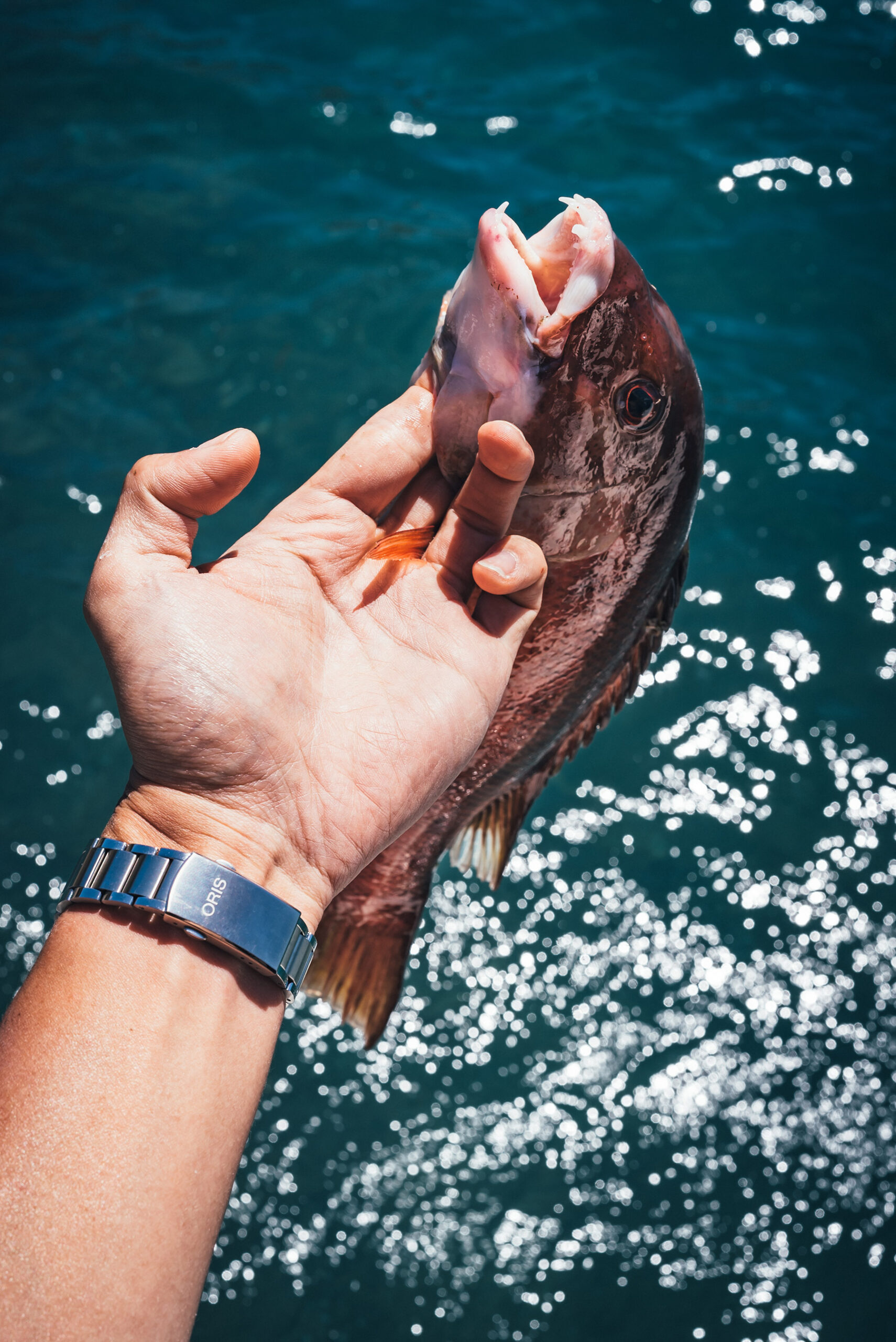 Oris has been making the Aquis in a 39.5mm case size since 2018, but what makes this particular iteration unique is that it eschews a ceramic bezel insert for a handsome and incredibly durable tungsten one instead. Photos really don’t do it justice. I had expected a more muted gray based on the product images I’d seen, but when the top ring plays with the light, it results in a pristine mirrored effect that’s quite striking in person. If you didn’t know that the uni-directional bezel was made out of tungsten, you’d be forgiven for thinking that the highly polished surface would be a total scratch magnet. In fact, it’s anything but. Throughout a weekend full of fishing, swimming in the ocean, chopping firewood, setting up and tearing down camp, the bezel emerged in immaculate condition, completely unscathed. Such scratch resistance is a welcome feature for any sports watch, though in exchange, the tungsten does add a modest amount of heft to the piece on the wrist. It feels substantial and just slightly on the heavy side for a sports watch of its size, but never in a distracting way. The compact 39.5mm-wide stainless steel case rides comfortably, and the short, sharply-angled lugs — an Oris Aquis signature — hug my 6.5-inch wrist perfectly. The three-link integrated bracelet tapers neatly down toward a signed single-fold deployant clasp, but it’s the combination of the polished outer bracelet links and the lustrous sheen of the tungsten bezel that give this watch a slightly more distinguished look than its other Aquis brethren. Subtle accents aside, this watch is still a diver’s watch at its core with its robust water resistance rating of 300 meters/30 bar, a legible dial with generously-lumed handset and indices, a secure bracelet clasp with diver’s extension, and a reliable Oris caliber 733 (base Sellita SW 200-1) automatic movement ticking away inside at 4Hz with 38 hours of power reserve. Overall, the package is consistent with what we’ve come to expect from the Aquis collection over the past decade: a solidly constructed and capable Swiss-made divers’ watch with its own unique-yet-familiar design elements, all at a reasonable cost. Priced at $2,200 USD, the Oris Aquis Date 39.5 is a more than fair value proposition in an ever-crowded steel sports watch market. 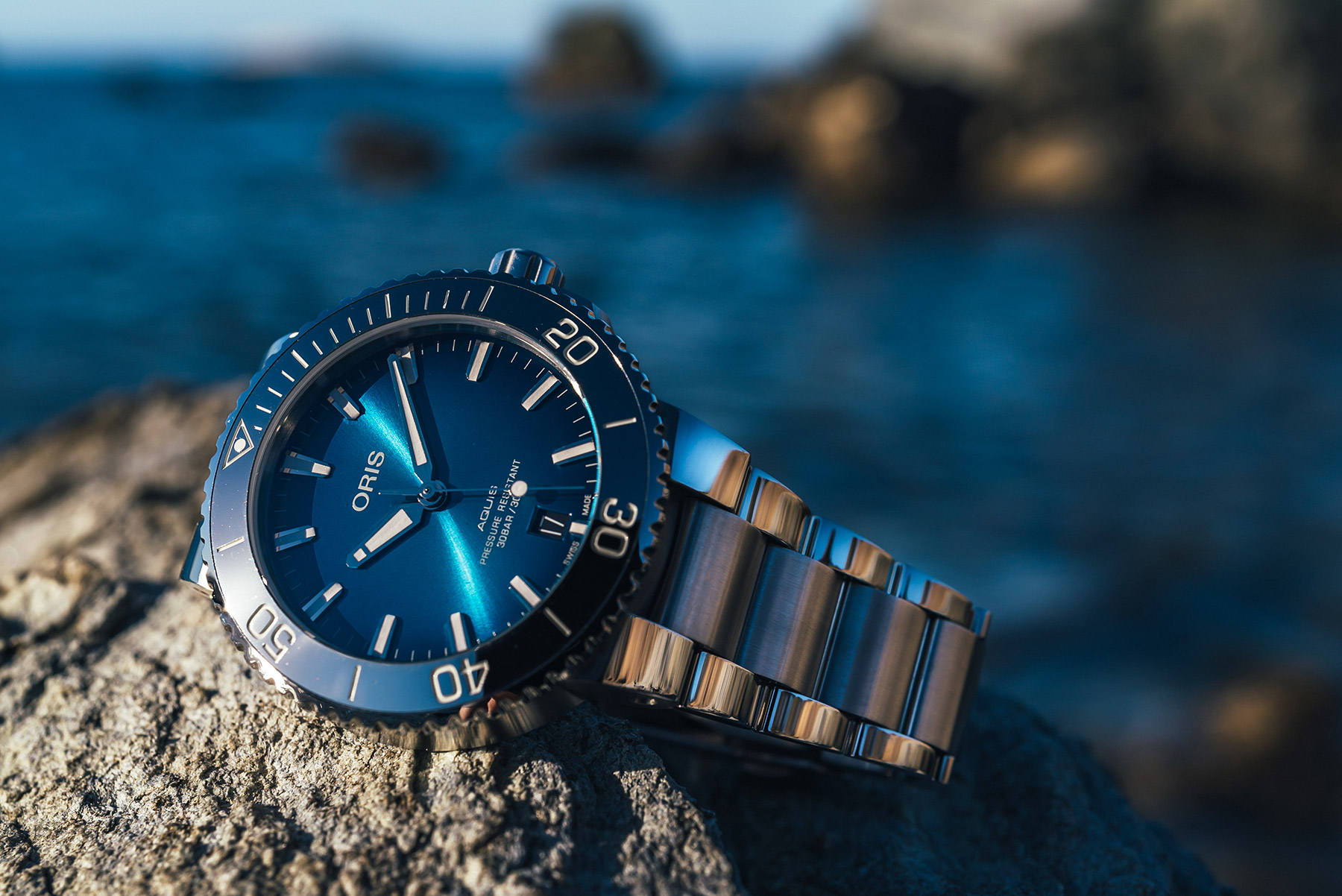 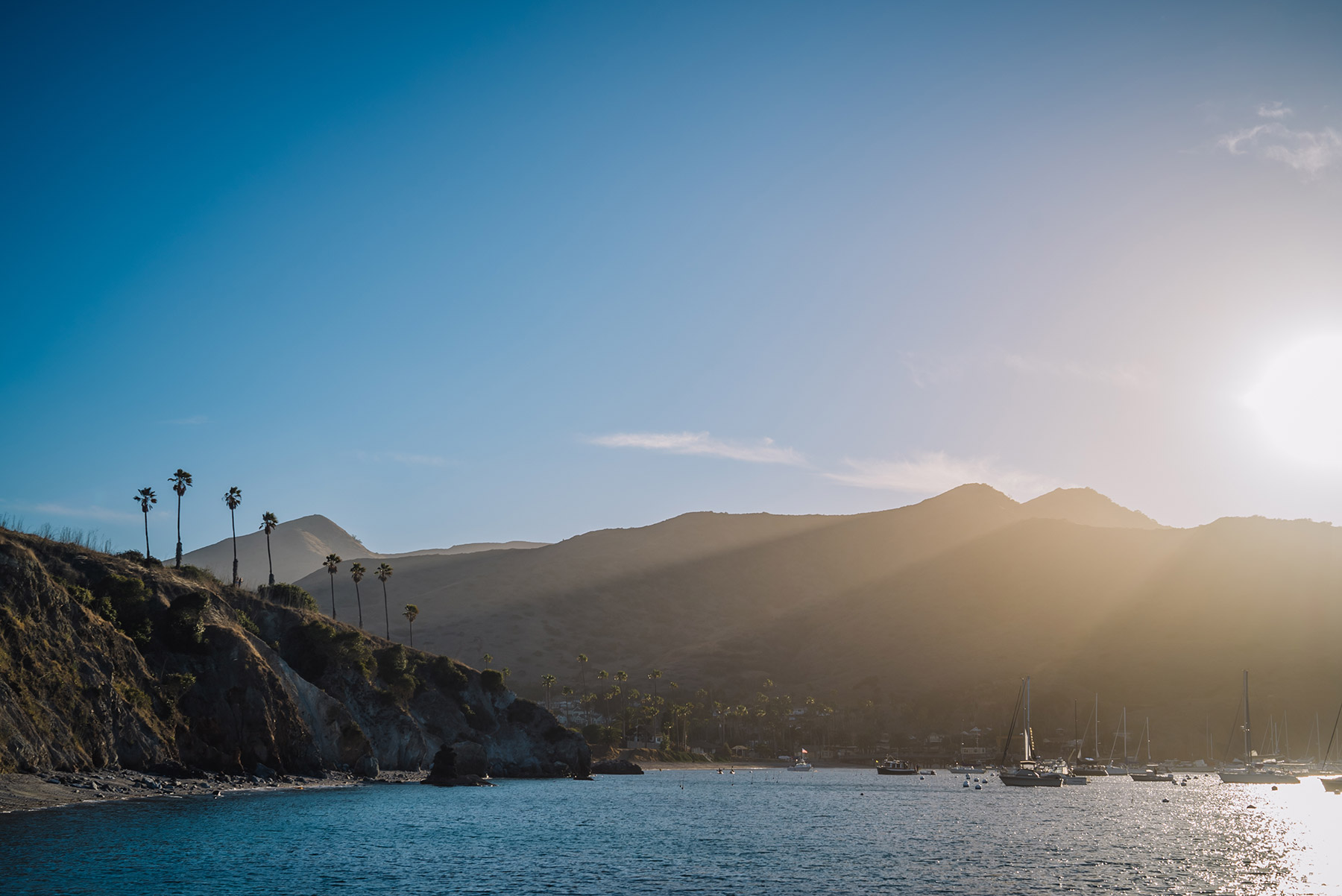 Jay’s boat rumbles to life early Sunday morning as we start to make our way back toward Long Beach. It’s dreary and overcast outside, but I hardly feel the chilliness thanks to the angry heat emanating from my back and shoulders. I manage a half-awake grumble as I accept the punishment for my poor SPF choices over the past few days. It’s a fair trade for some time out on the water with friends and reliving old childhood fishing memories. As the boat clears the harbor into the open waters of the Pacific, Jay pushes the throttle forward and I take one last look at my watch. I set the bezel to time the journey home as my mind drifts off into the blue-green waves, daydreaming about my next Bloody Mary.

Pricing for the Oris Aquis Date 39.5 is $2,200 USD. For more information, visit the Oris website.