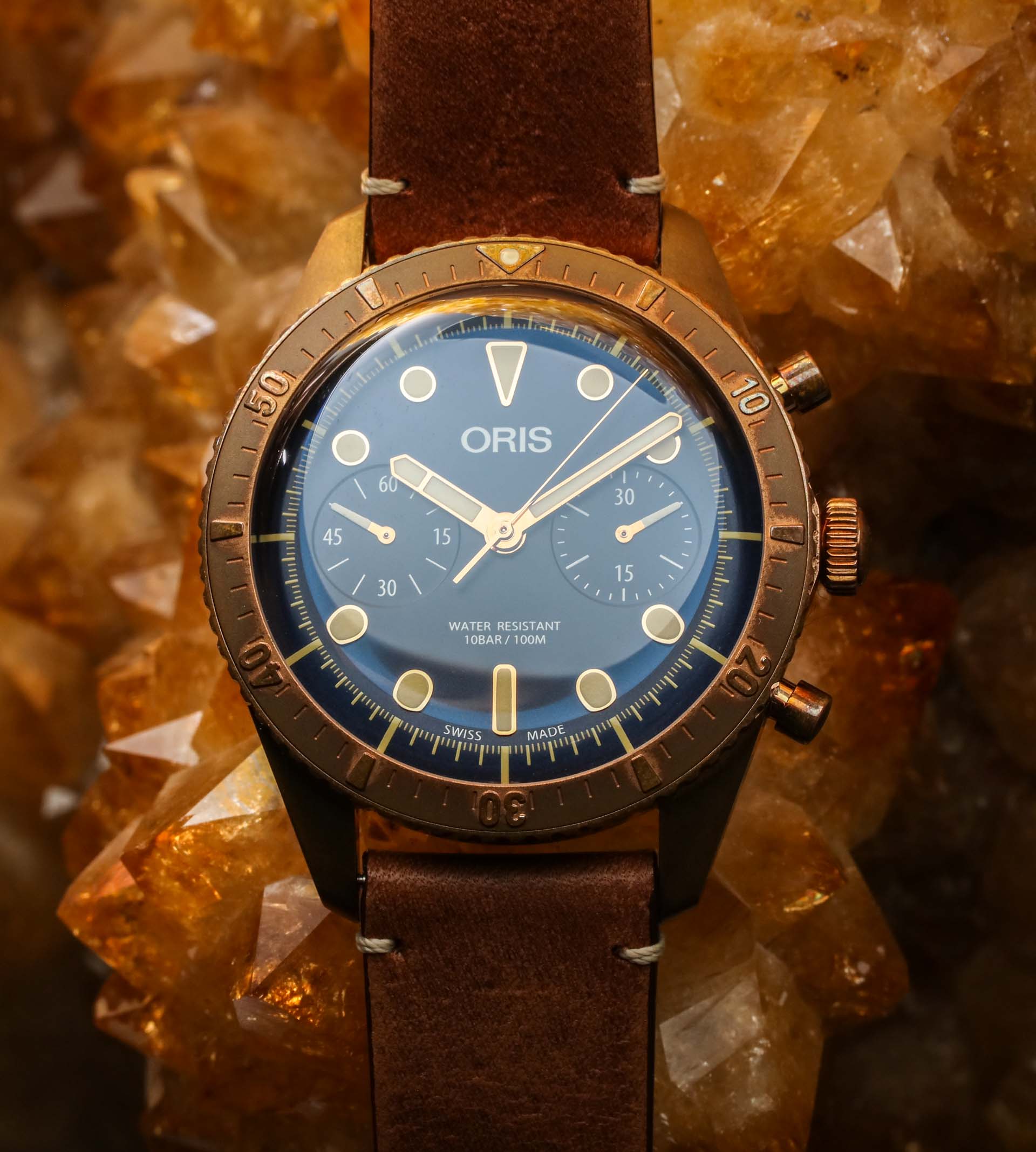 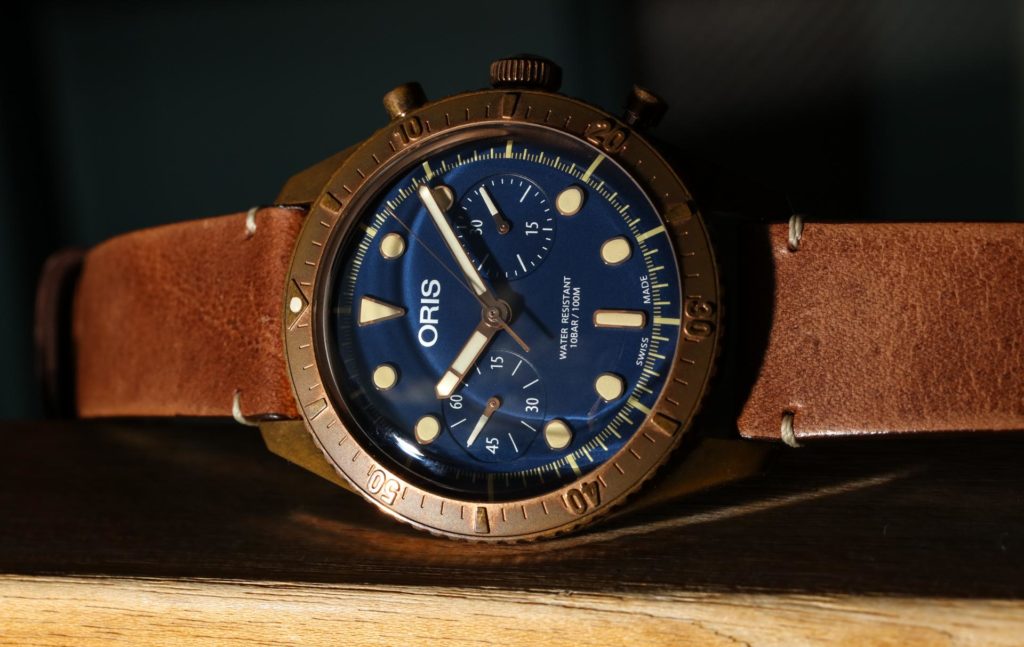 For 2018, Swiss Oris follows up one of their recent limited edition watches with a new version in the form of a chronograph. Two years ago in 2016 Oris originally launched a limited edition bronze version of its then still new 65 Diver in the 42mm wide case. The model was named the Oris Carl Brashear Limited Edition, and quickly became a fan favorite for its good looks, trendy case material, and versatile aesthetic. For 2018 Oris is hoping to recapture the magic of the original Carl Brashear timepiece with the 2,000-piece Oris Carl Brashear Chronograph Limited Edition reference 01 771 7744 3185 LS.

Carl Brashear was a particularly accomplished and sympathetic US Navy man because at the height of his career he succeeded as a master diver even after having his left leg amputated. The injury occurred during a Navy mission that was part of a munitions salvage operation. Brashear’s specialty was in underwater recovery after having gone to the Navy’s Diving & Salvage School. He was also the Navy’s first black master diver. More about Carl Brashear and why he is a pretty cool hero can be found on Wikipedia here. Some of the proceeds of the limited edition watch are said to go to the Carl Brashear Foundation charity. 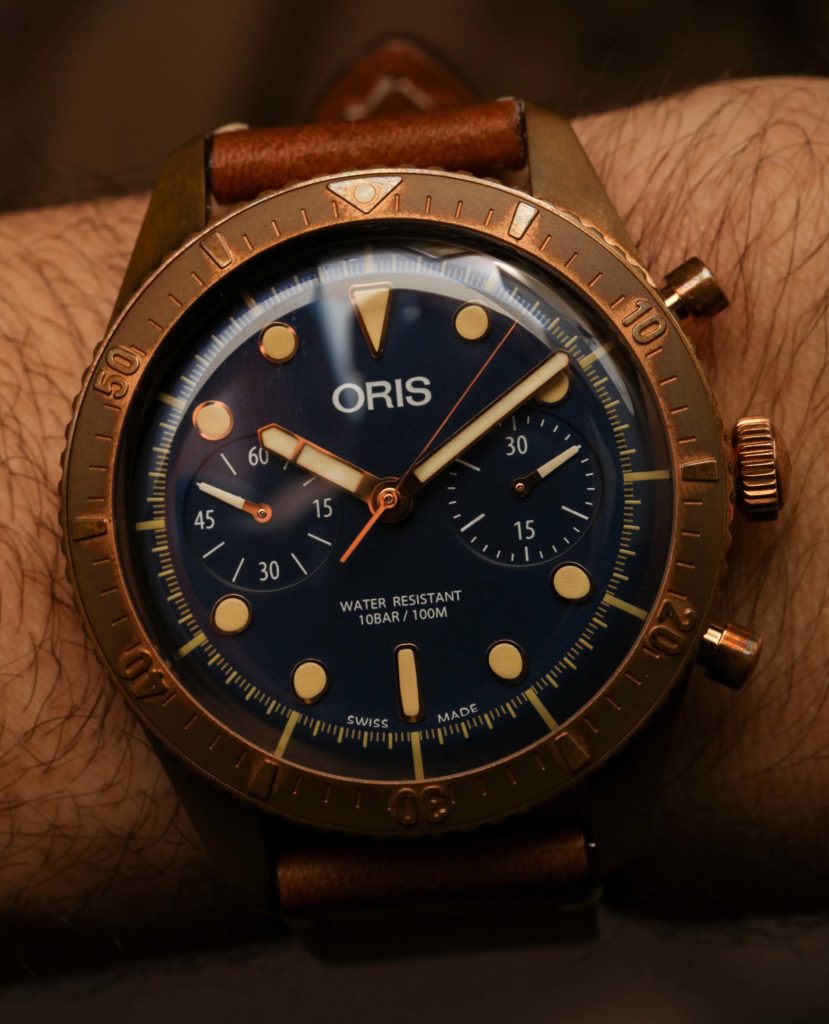 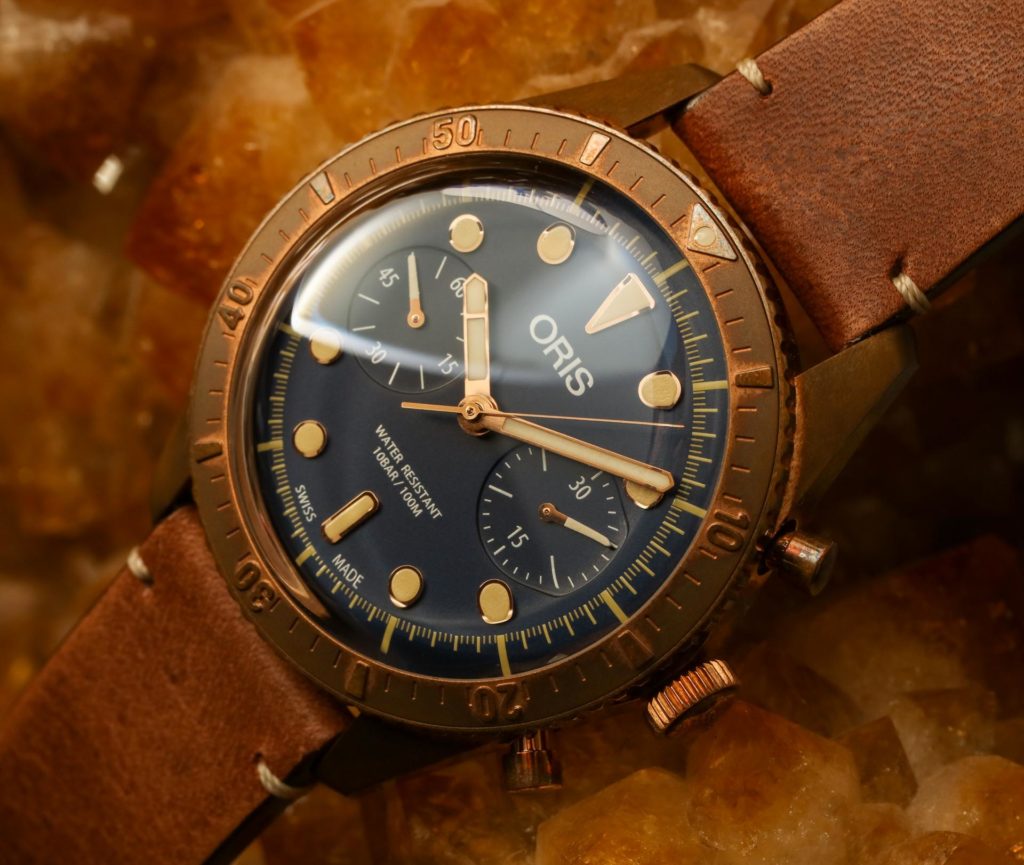 In many ways the Oris Carl Brashear Chronograph Limited Edition watch is more of the same. The watch case is the same 43mm wide as the original, with the same bronze metal construction and attractive blue dial. This particular piece I shot was worn for a while – so it represents what the case might look like after aging for a few months. Aside from a slightly thicker case thanks to the thicker movement, the real novelty here is the bi-compax-style 30-minute chronograph. For this Oris uses the still uncommon Sellita SW 510 automatic chronograph movement. According to Oris, this is the first time they’ve used this movement, and they call it their Oris Caliber 771. Over the dial is a sapphire crystal domed to look like a vintage acrylic crystal.

Just like the original Oris Carl Brashear bronze watch, the Carl Brashear Chronograph is an undeniably attractive timepiece. The addition of the chronograph sub-dials as well as the chronograph pushers on the case up the ante, though the simple good looks of a clean dive watch are removed a bit. Bi-compax diving chronographs are rare (as are chronograph dive watches), but as watch brands have less vintage dive watch inspiration to pull from, they clearly need to find new ways of being inventive. Many will logically think of the also recent Tudor Black Bay Chronograph as the logical competitor piece to the Oris Carl Brashear Chronograph. Ironically, these watches are priced within about $100–$200 of one another. Either one is a good choice and neither would win in a flat-out fight. Though when it comes to trendy good looks and a more refined design, the Oris might have the edge. 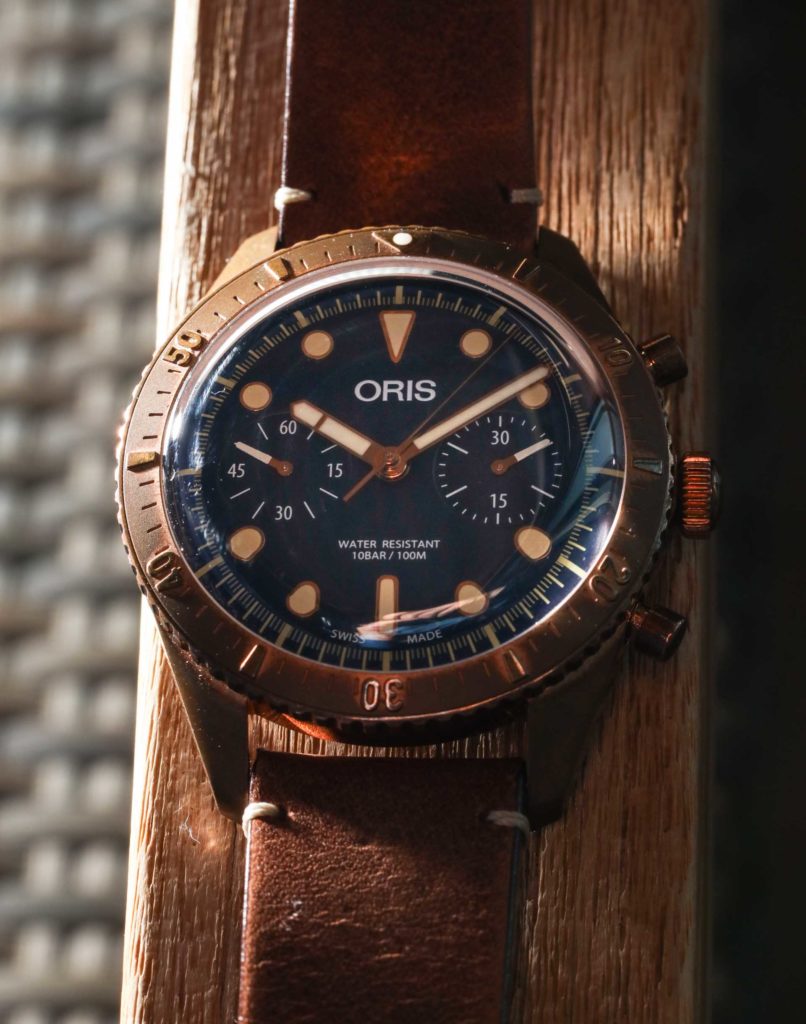 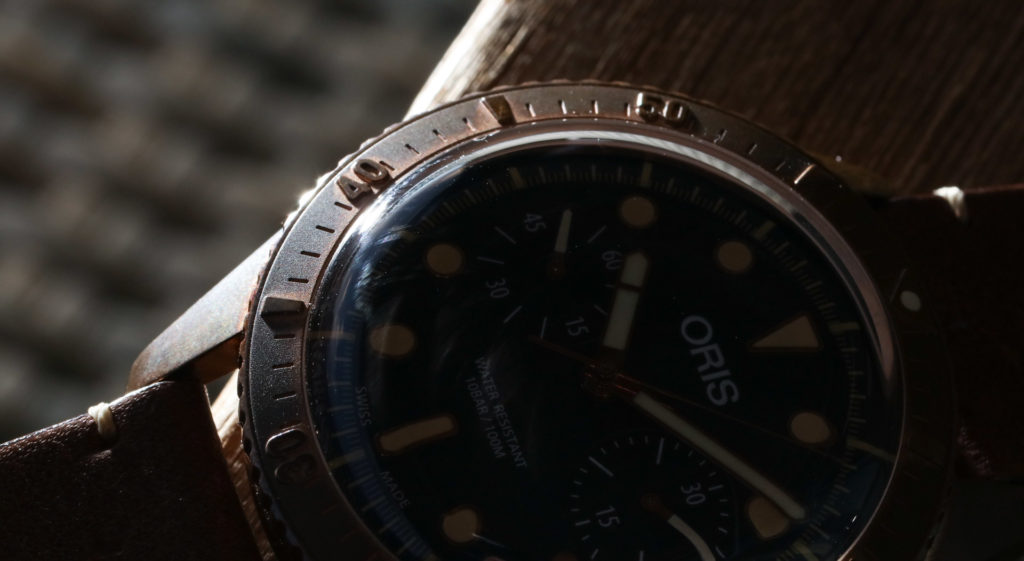 Personally, I like the Oris Carl Brashear Chronograph, but feel that it tends to the needs of style a tiny bit more than utility. Oris makes some excellent professional dive watches, so yes, one could easily say they are allowed to make more fashionable (slightly less durable) companion pieces such as this limited edition. As a dive watch the case is water resistant to 100m, and I’m not sure if the chronograph pushers can be used under water. I’d get a bit more excited about diving chronograph watches if using the chronograph underwater was possible. Some timepieces have this function, but its admittedly rare in mechanical timepieces.

I’ve seen Oris’ bronze cases after aging for a year or two – and yes they certainly develop a “patina.” That’s the real reason why folks like bronze watches (in addition to the case color material) and this is because the look of the bronze material changes over time. Bronze is a “style over substance” choice when it comes to choosing watch case materials because when compared to steel, well… steel will win out in most instances. Bronze is both heavier and softer than steel, though it does have that warm rosiness thanks to the copper content. You’ll of course notice that the caseback of the watch is in steel, and given a pleasant embossed motif of a diver’s helmet and the late Mr. Brashear’s mantra of “It’s not a sin to get knocked down, it’s a sin to stay down.” That guy was tough as nails. 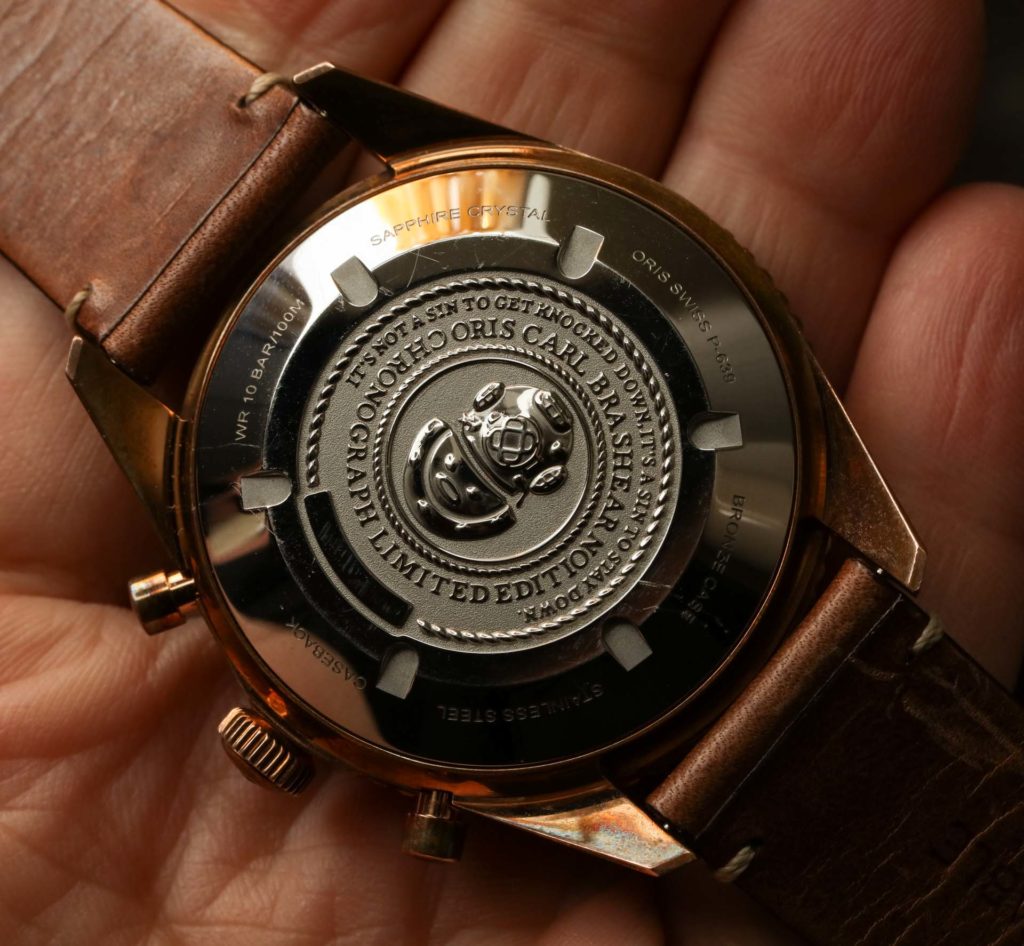 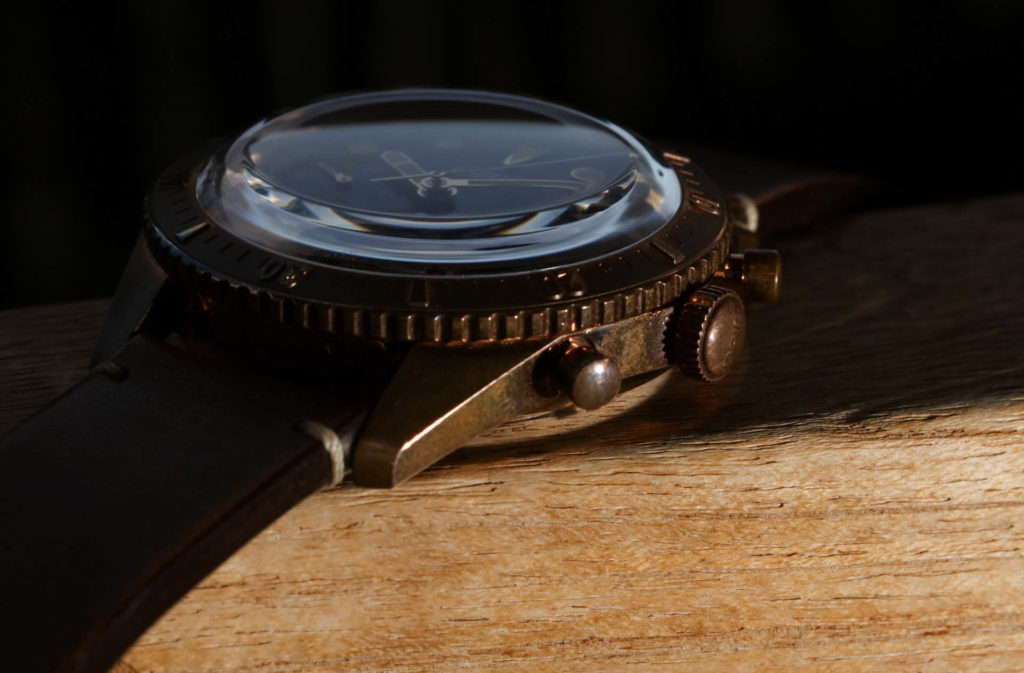 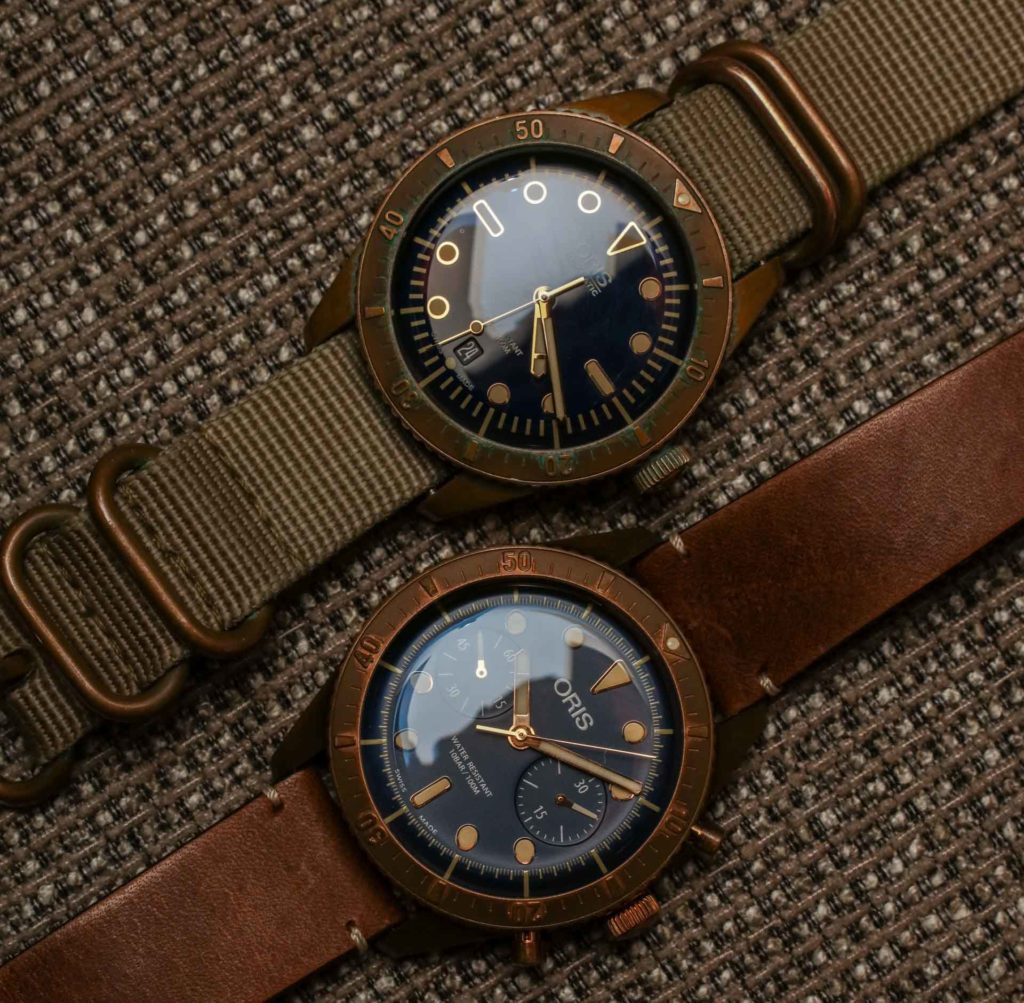 Because bronze tends to oxidize when in contact with one’s skin, Oris also includes a stainless steel strap buckle in addition to the bronze one. This “discoloration” tendency of bronze is also why the caseback is in steel. The dial elements on the Carl Brashear Chronograph are in a rose gold tone, which matches the bronze case well. Despite the addition of the sub-dials and extra hands, legibility is still strong. Oris probably made the right decision by maintaining dial symmetry and not including a date window.

From an intellectual standpoint there isn’t really anything else to discuss as being new in the Oris Carl Brashear Chronograph Limited Edition. Again, if you liked the original Carl Brashear Limited Edition and missed out, the Carl Brashear Chronograph could satisfy your cravings for more. It’s also technically a more interesting and distinctive model as compared to the original – so it’s great for anyone who missed out the first time. Bronze watches continue to trickle in each year and will do so until people stop enjoying the “personalization” you can get from how your particular bronze watch case may patina. These also follow suit with the still important trend of vintage-style watches, which are designed to be new but evoke a sense of timeless duty and enduring utility. There also happens to be the more straightforward and arguably elegant style of vintage sport watches. 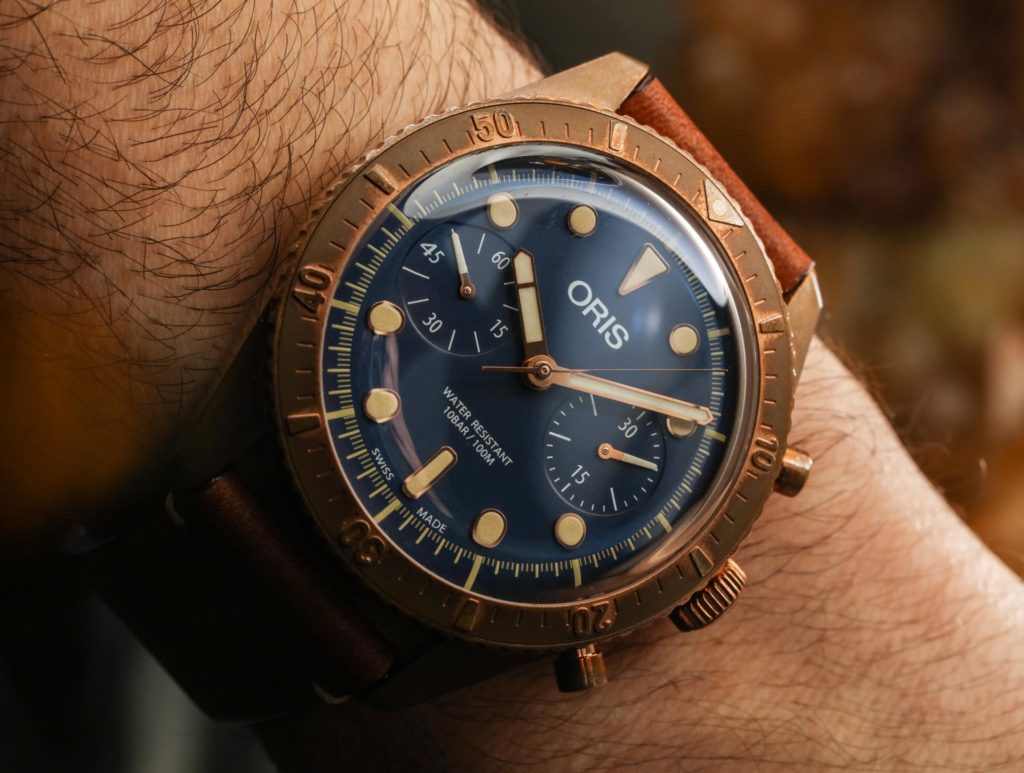 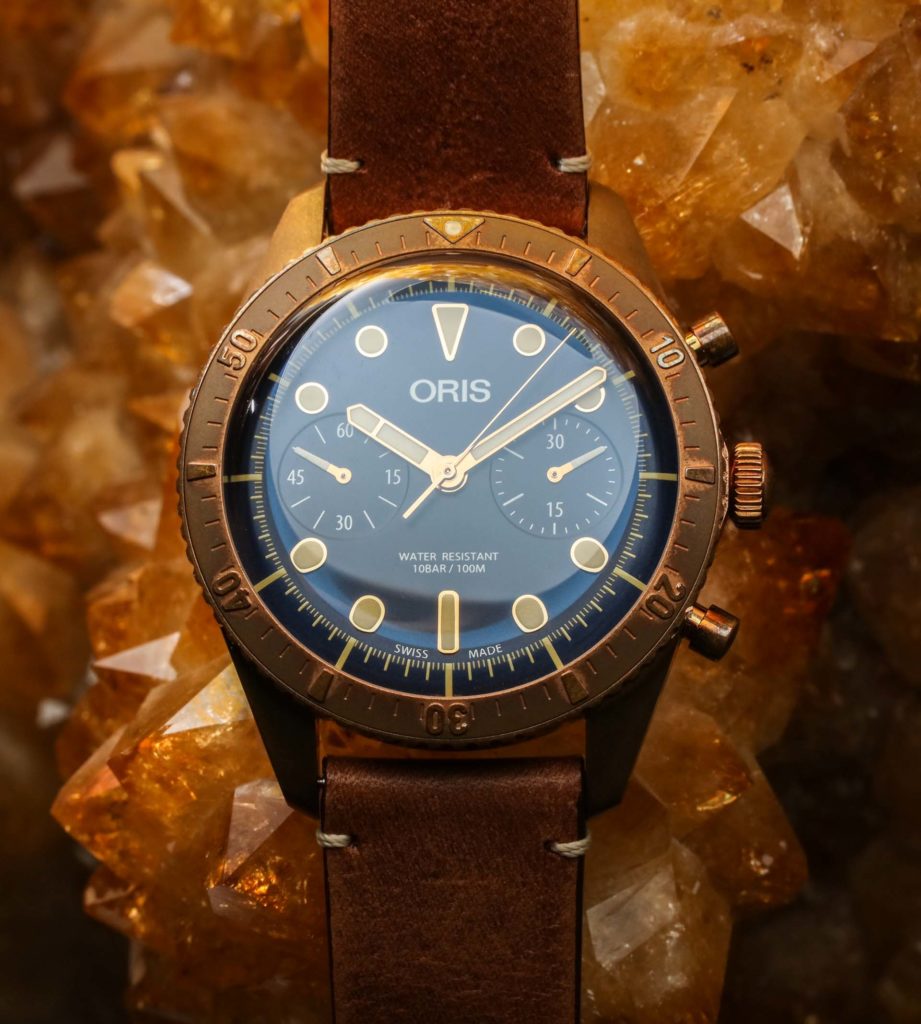