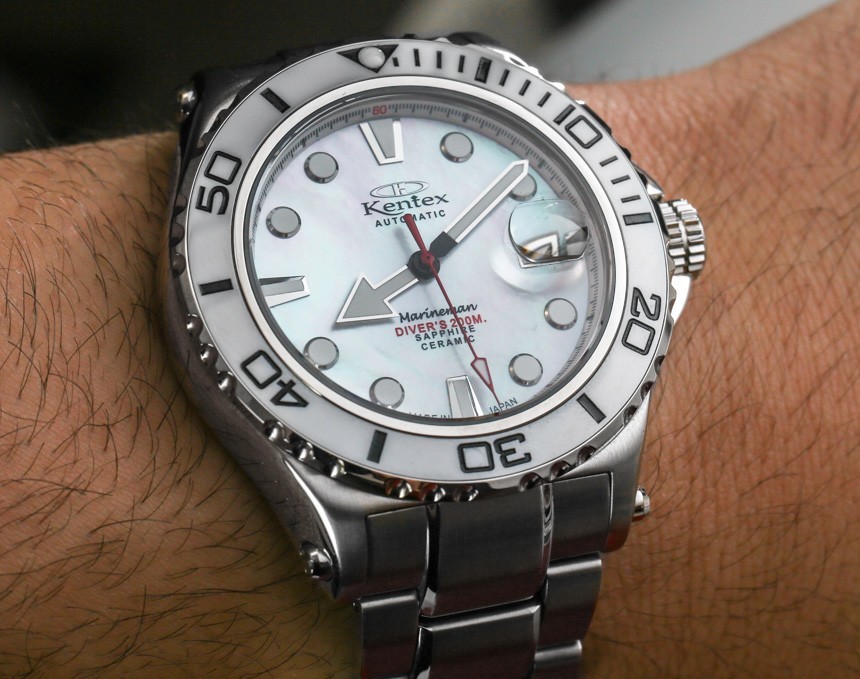 Kentex is the Japanese watch company you probably haven’t heard of, but they should be on your radar. In fact, I actually had to travel to Asia to learn about the brand. It wasn’t until I first attended the Hong Kong Watch & Clock Fair in 2012 that I had the pleasure of learning about this impressive watch maker. Unlike the bigger Japanese watch companies like Seiko, Citizen, Orient, and Casio, I don’t believe that Kentex produces their own movements. In fact, this Kentex Marineman Seahorse includes a Seiko mechanical movement (more on that later). What Kentex does excel at is offering remarkably well-composed and good-quality watches for fair prices – something which at its core is one of the biggest reasons to get a Japanese-made timepiece. More so (and in my opinion), Kentex watch designs are a bit more reminiscent of European designs, being a bit less “Japanese” in flavor. 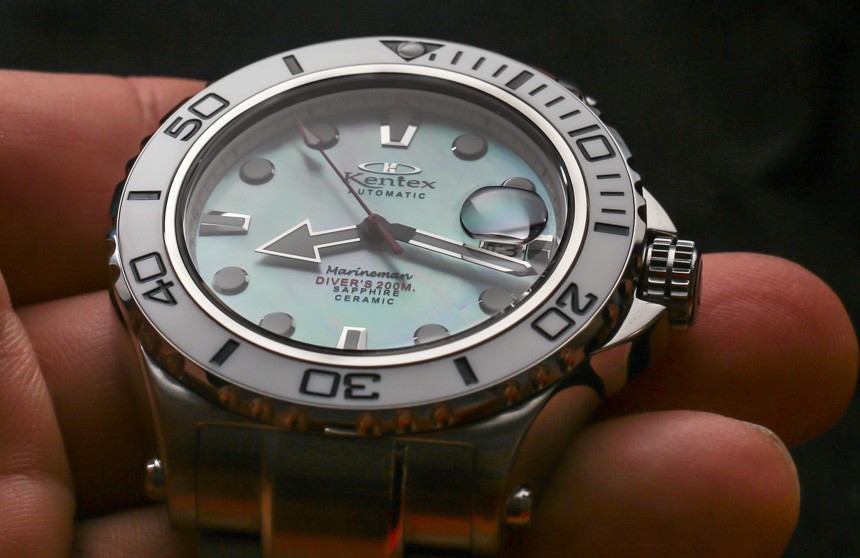 Take, for example, this lovely Kentex Marineman Seahorse. Ignore, for a second, that I happened to choose this limited edition model with a white bezel and mother-of-pearl dial. Compared to many other Japanese sport or dive watches, this is a design which seems to understand the “less is more” principle that so typifies the best of European design. What you essentially have is a generously sized, easy to read, yet nicely appointed dive watch most watch people wouldn’t hesitate to own. So if this more niche model isn’t your cup of tea, be aware that Kentex produces the Kentex Marineman Seahorse with more traditional dials such as black – but also experiments with other colors such as green, blue, and of course, mother-of-pearl.

I first went hands-on with the Kentex Marineman watch collection here. There, you can see images of other dial variations and colors. What so impressed me was not only the affordable price, but the finishing as well as attention to details such as the properly sized hands, quality polishing on the exterior of the hour markers, and general high-end components used in much of the watch. The Kentex Marineman Seahorse is a proudly Japanese watch, but it sends an uniquely alternative message to timepiece aficionados compared to its colleague brands like Citizen or Seiko. 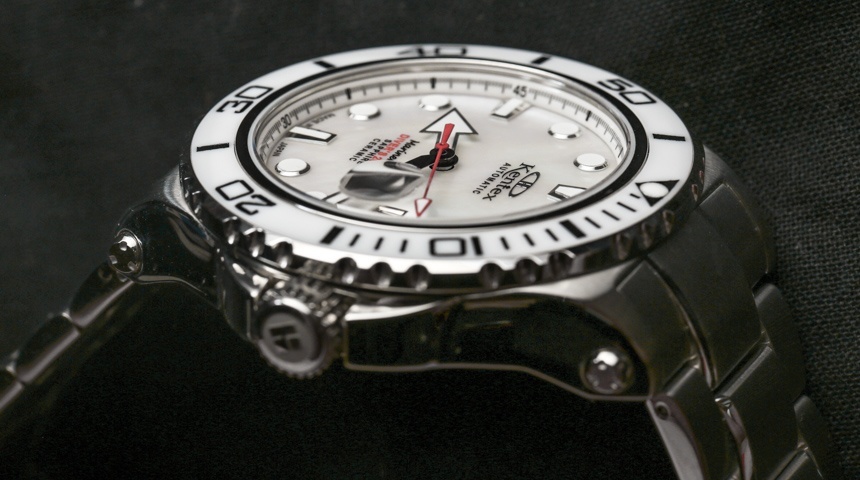 The Kentex Marineman Seahorse is a mechanical watch that contains a Japanese Seiko-made caliber NH35 automatic movement. This is a work-horse mid-range automatic that you’ll find similar versions of in many Seiko 5 range timepieces. The NH35 features automatic as well as hand-winding, and also hacking seconds. Operating at 3Hz (21,600 bph), you’ll get about 41 hours of power reserve out of an NH35. You can get the NH35 movement in some slightly cheaper watches, but I would say that for the quality of the components in the Kentex Marineman Seahorse, the asking price for the timepiece is not too much. 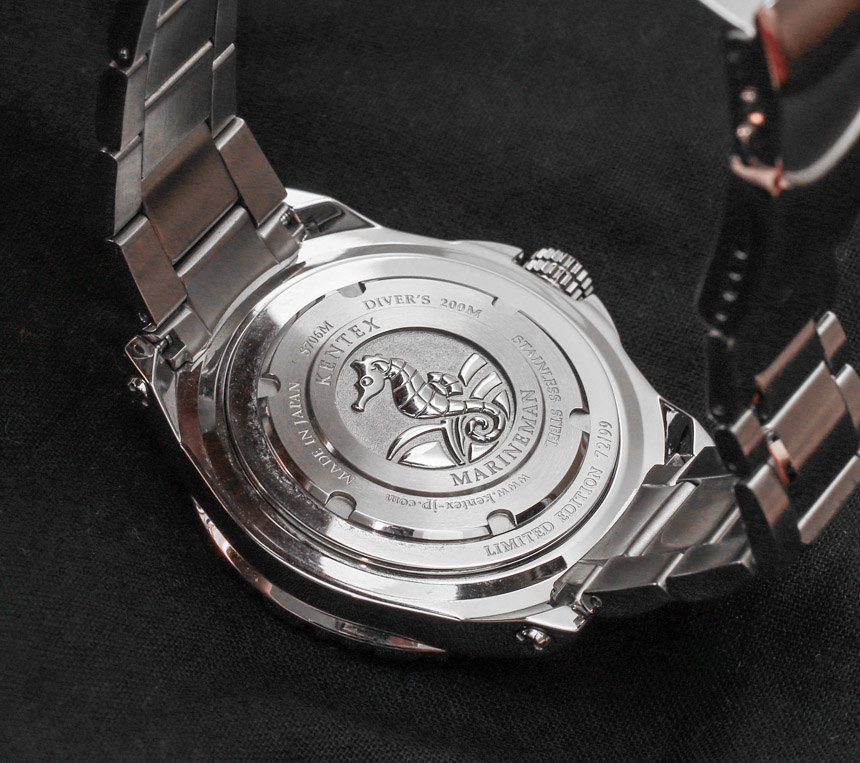 At its heart, the Kentex Marineman Seahorse is inspired by classic European dive watches. Having said that, you don’t get the impression that the watch is attempting to copy and specific design or brand. While you can probably find various elements that many have been borrowed from existing designs, I applaud Kentex for coming up with a familiar, yet original design for the Kentex Marineman Seahorse. Yet, the name of the watch does make me wonder just what a “marineman seahorse” is. With that said, you do get a nice relief-engraved picture of a seahorse on the rear of the watch.

From a dive watch perspective, the Kentex Marineman Seahorse is water resistant to 200 meters with a sapphire crystal, rotating diver’s bezel, and well-lumed hands and hour markers. The bracelet also happens to have a diver’s extension on it. The AR-coated crystal offers a lot of legibility, and you’ll either hate, love, or feel ambivalent toward the magnifier lens on the crystal. I’m personally pretty ambivalent about it. 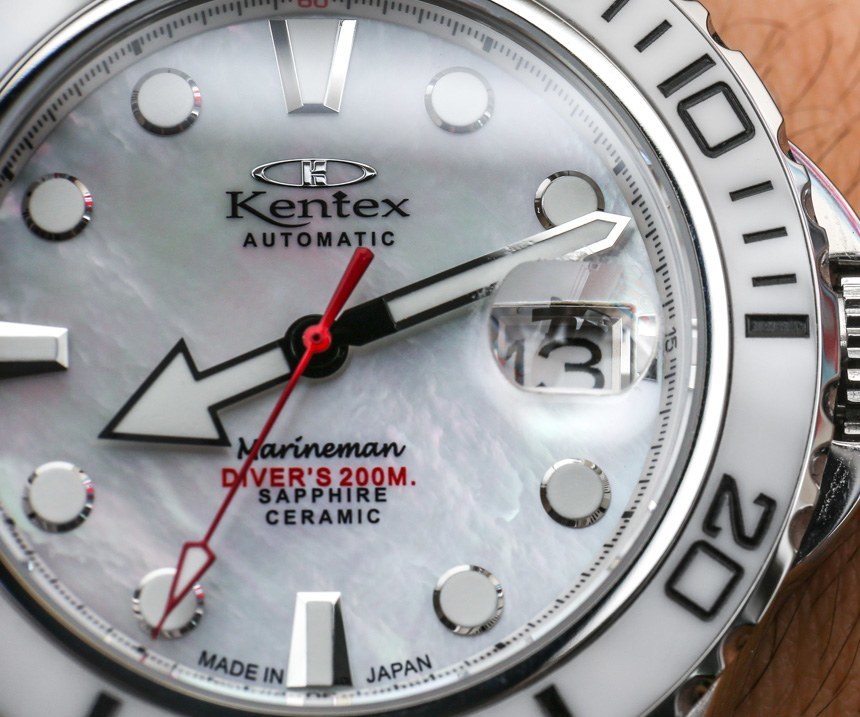 Looking very closely at the dial with my watch nerd hat on, you see a range of small areas that indicate minor lacks of refinement. From a distance the dial looks great, but those who like to carefully inspect dials will notice a few things that Kentex might have done a bit better. First is the color of the hands which is just a bit different than the color of the hour markers. Typically, these should be the same color, and according to Kentex, it is all SuperLumiNova. Next is the orientation and text of the “Diver’s 200M.” text on the dial. It is just a little bit too low, more-or-less touching the font under it and leaving a gap between it and the space over it. Ideally, the text should all be the exact same space apart. Also, I don’t think the “.” after “200M” was at all necessary. Looking a bit lower, you see the “Made In Japan” text bisected by the 6 o’clock hour indicator. There is a small space between “Japan” and the indicator which is not echoed on the other size. It is true that the design wanted to perfectly center-align the text, but that small gap might have been remedied by slightly widening the font for “Japan” or something else. 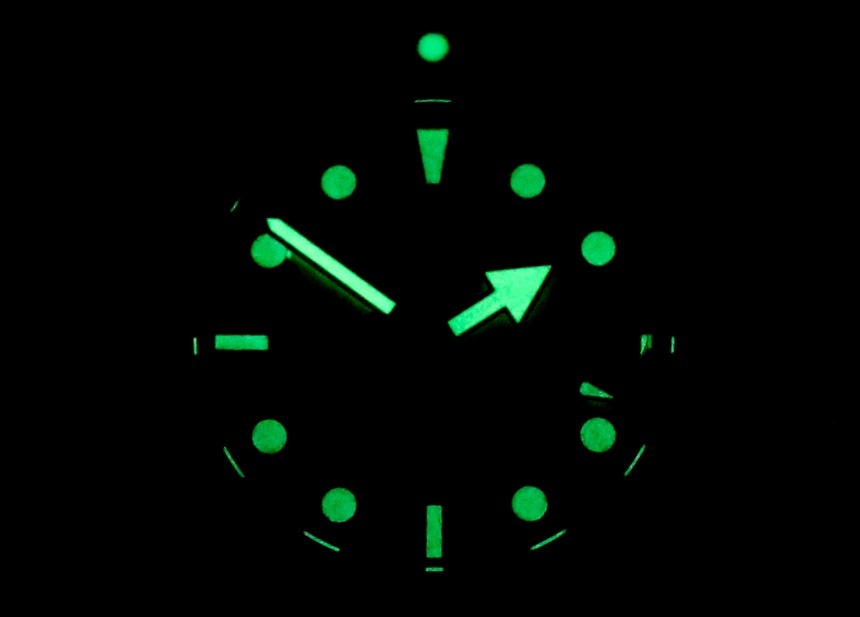 None of this is to say that I don’t like the dial – which is actually the major element which first drew me to the Kentex Marineman Seahorse watch. Rather, because I like it so much, I take the time to inspect it carefully. Another plus is the minute/second scale around the dial as the flange ring – that is a welcome detail.

While this isn’t true for all bezel insert colors, the black or white bezels on Kentex Marineman Seahorse watches are ceramic – which is a nice feature that many collectors will enjoy, given the material’s scratch resistance. Even if some of the color for the minute indicators on the bezel wear off, they are actually engraved into the bezel for added longevity. For those who care, a lume pip sits at 12 o’clock on the rotating bezel. 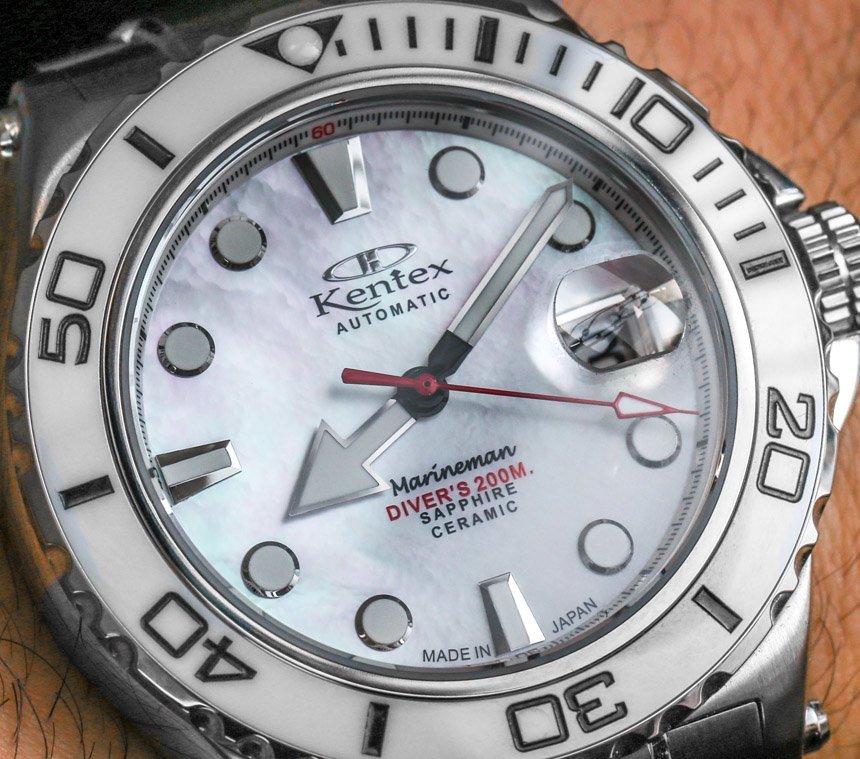 For a long time I’ve been after a cool sporty dive watch with a mother-of-pearl dial. One that is nevertheless masculine… I think with the Kentex Marineman Seahorse I got exactly what I was asking for. The naturally glossy and slightly colorful dial material looks attractive and gives the otherwise utilitarian design a decorative look.

The Kentex Marineman Seahorse is not a particularly small-wearing watch, at almost 45mm wide. The size is further emphasized by intentionally protruding screws in the lugs and the dimensions overall. While not over-the-top, the Kentex Marineman Seahorse feels like the pickup truck of dive watches – which is either an excellent thing or an undesirable thing, depending on who the wearer is. The crown screws down and has a Kentex logo, as well as being flanked by crown guards. 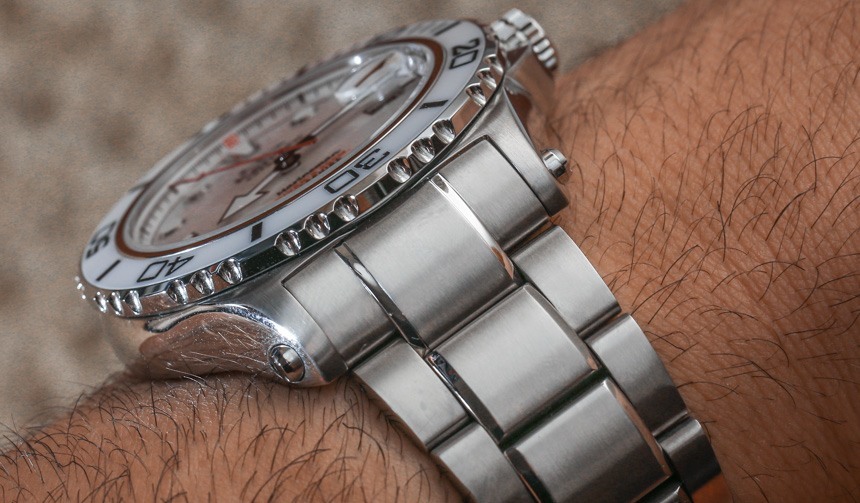 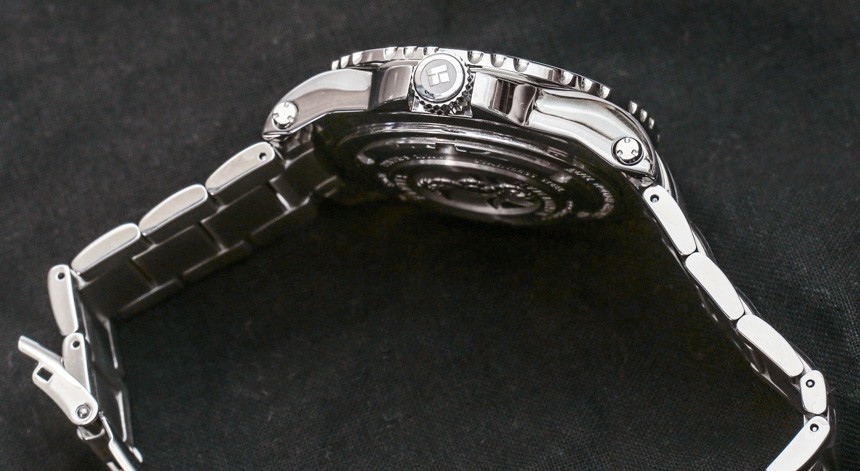 Kentex did a nice job polishing the case. You have some contrasting brushed and polished surfaces, and I like the polished beveled edges on the bracelet. Kentex supplies the bracelet with a solid end-link, which is rare at this price range – but not unheard of. Overall, I like the bracelet a lot. The above mentioned beveled edges are nice, as is the slight tapering from where the bracelet meets the case to the deployant. I am a huge fan of tapering bracelets so I find the addition of one here to be really welcome. It also helps to reduce how large the steel case wears. 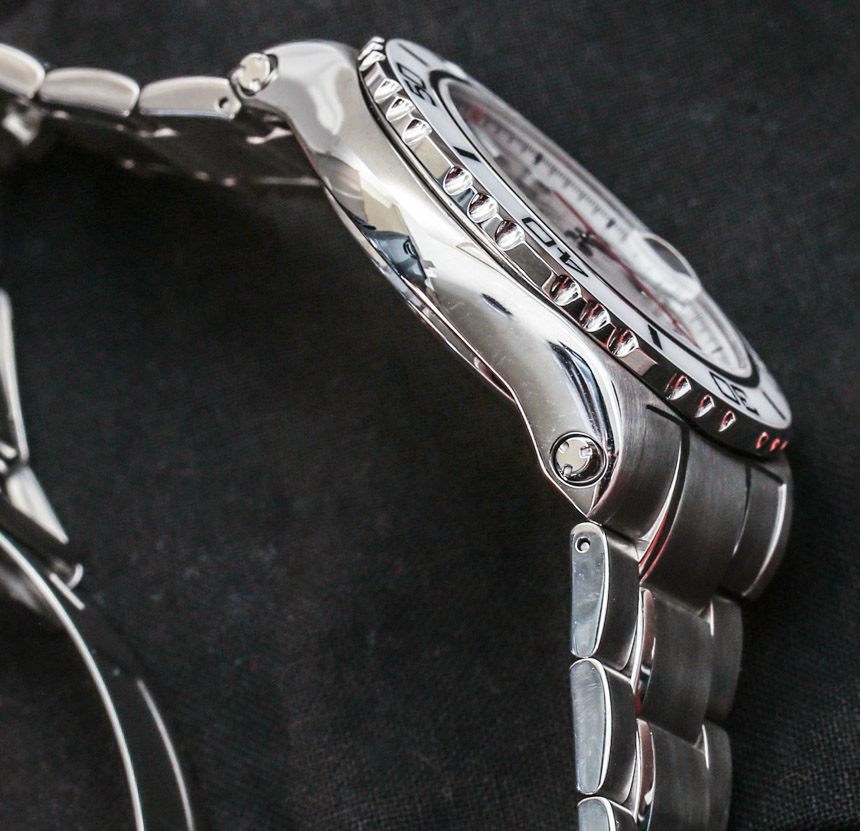 Kentex supplied both half-links and a micro adjust in the deployant to help you get a good fit with the bracelet. Common to many Japanese watches is the unfinished stamped metal deployant and diver’s extension parts. These don’t come with a high-end feel, but they are functional and the triple locking deployant feels stable enough. You do, however, get the “Asian rattle,” as I call it from the bracelet, given the parts, which lock well enough, but rattle around a bit if you shake it. This is compared to say a Rolex Submariner that has a fluid moving bracelet, but one that the parts are so closely put together with tiny tolerances that there is no rattle. But of course, for the retail price of your standard Rolex Submariner you can buy about 11 Kentex Marineman Seahorse watches. 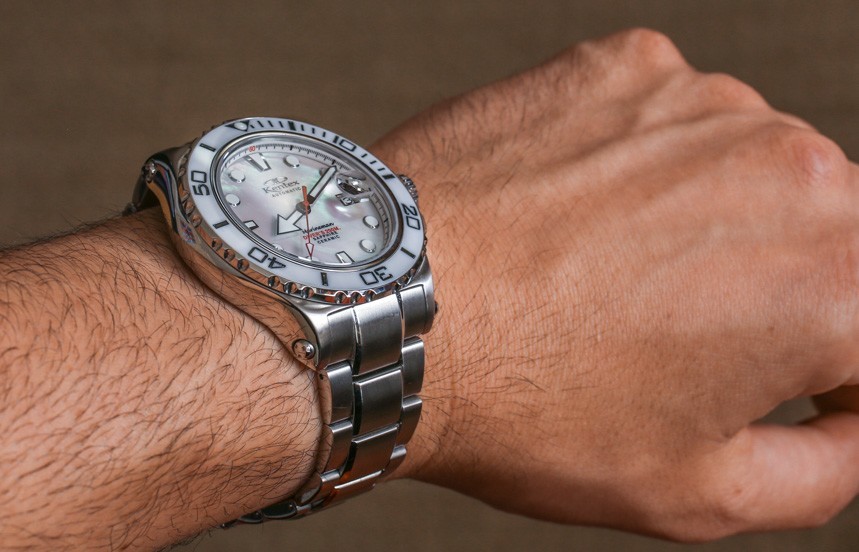 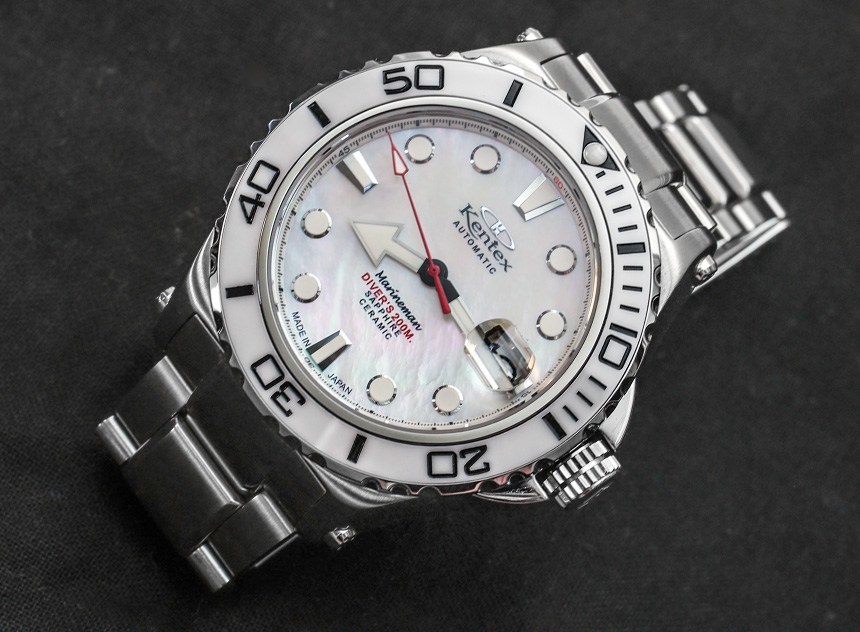 Necessary Data
>Brand: Kentex
>Model: Marineman Seahorse ref. S706M-09
>Price: $780
>Size: 44.8mm
>Would reviewer personally wear it: Yes
>Friend we’d recommend it to first: Japanese watch lover looking for something mechanical with a bit more of a European style but still a great value.
>Best characteristic of watch: Handsome looks with a nice assortment of parts of impressive details for the money.
>Worst characteristic of watch: Some forgivable, albeit noticeable, refinement issues. Might be too large for some tastes.