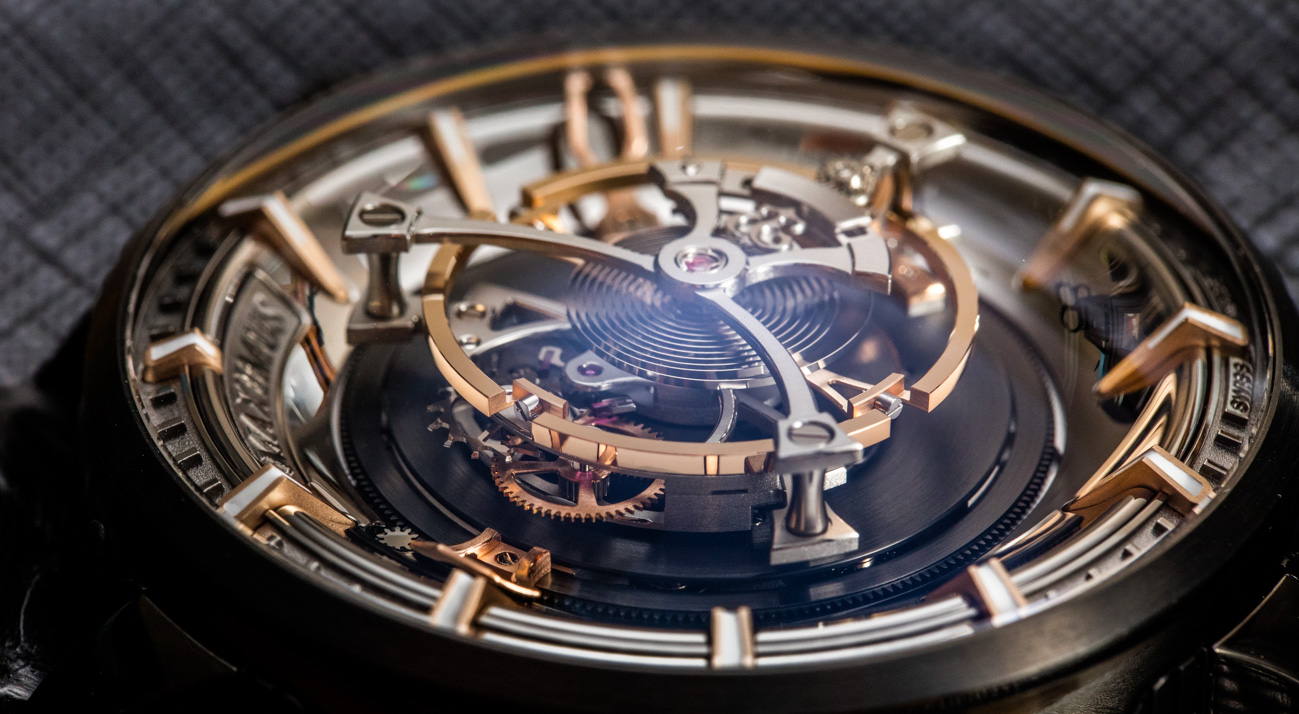 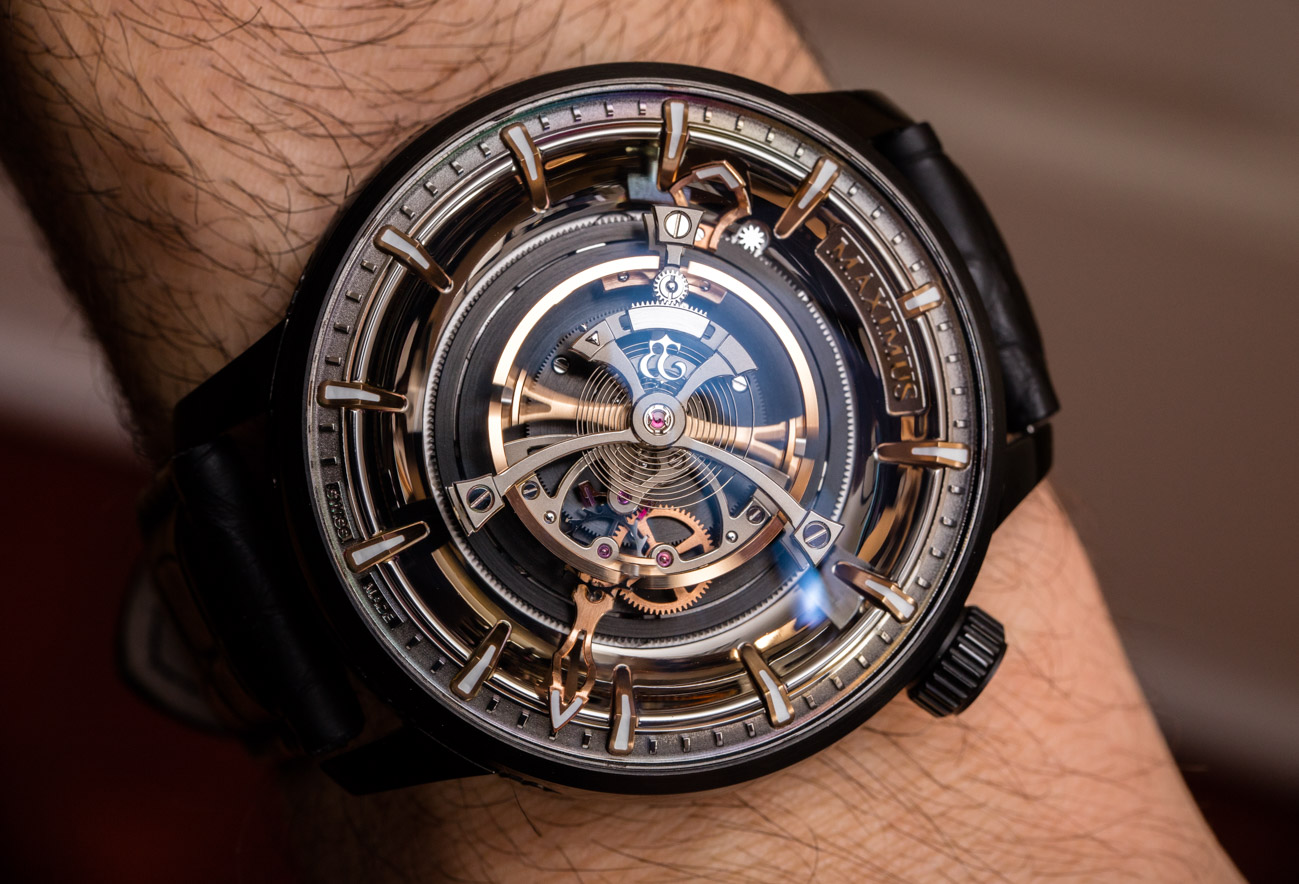 A few years ago Swiss Kerbedanz debuted the Maximus watch to the world. The Maximus’ main claim to glory is that it boasts the world’s largest tourbillon mechanism in a wristwatch. 27mm wide doesn’t lie — and, indeed, the massive slowly spinning tourbillon cage that dominates the dial of the Maximus watch steals the show each time you glance down at the dial and immediately forget to actually read the time. The Maximus watch isn’t, however, just about displaying a massive tourbillon — the personality of the watch bears discussion, as does the particular technical system used by Kerbedanz to render such a large tourbillon mechanism in a traditional mechanical wristwatch. According to Kerbedanz, the “Maximus” name was inspired by the ancient Roman “Circus Maximus” horse-galloping circuit and today generally means anything that is large and probably impressive. 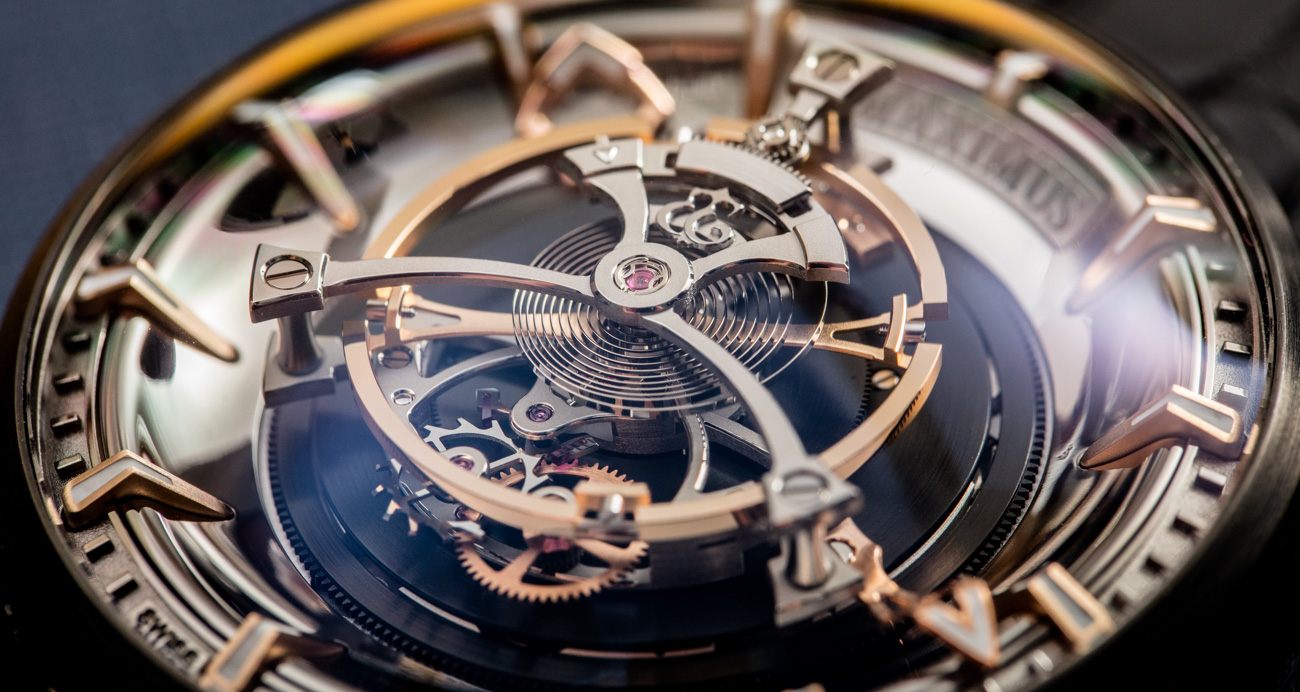 A couple of years ago, I wrote a hands-on article on aBlogtoWatch discussing this same version of the Kerbedanz Maximus watch here. What I lacked at the time was more of an opportunity to wear the watch and see how it felt in the real world. The images from that previous article were taken by David Bredan on our team, so my wrist-on time with the watch itself was limited. What does wearing the Maximus out in the real world feel like? I can say one thing for certain: It is a timepiece that doesn’t want the wearer to forget it is there.

That latter statement isn’t just a function of the Maximus’ 49mm-wide case size, but also due to the movement’s small clock-volume ticking which comes from the normal operation of the high torque movement that powers the tourbillon. The case (here in black-coated titanium) is also about 23mm-thick being topped with the large AR-coated domed sapphire crystal. Despite the really large proportions of the case, Kerbedanz made the Maximus wearable, thanks to stubby lugs and a 54mm lug-to-lug distance. In short, while this isn’t a petite timepiece by any means, the case design does allow for it to be easily wearable by most willing wrists. 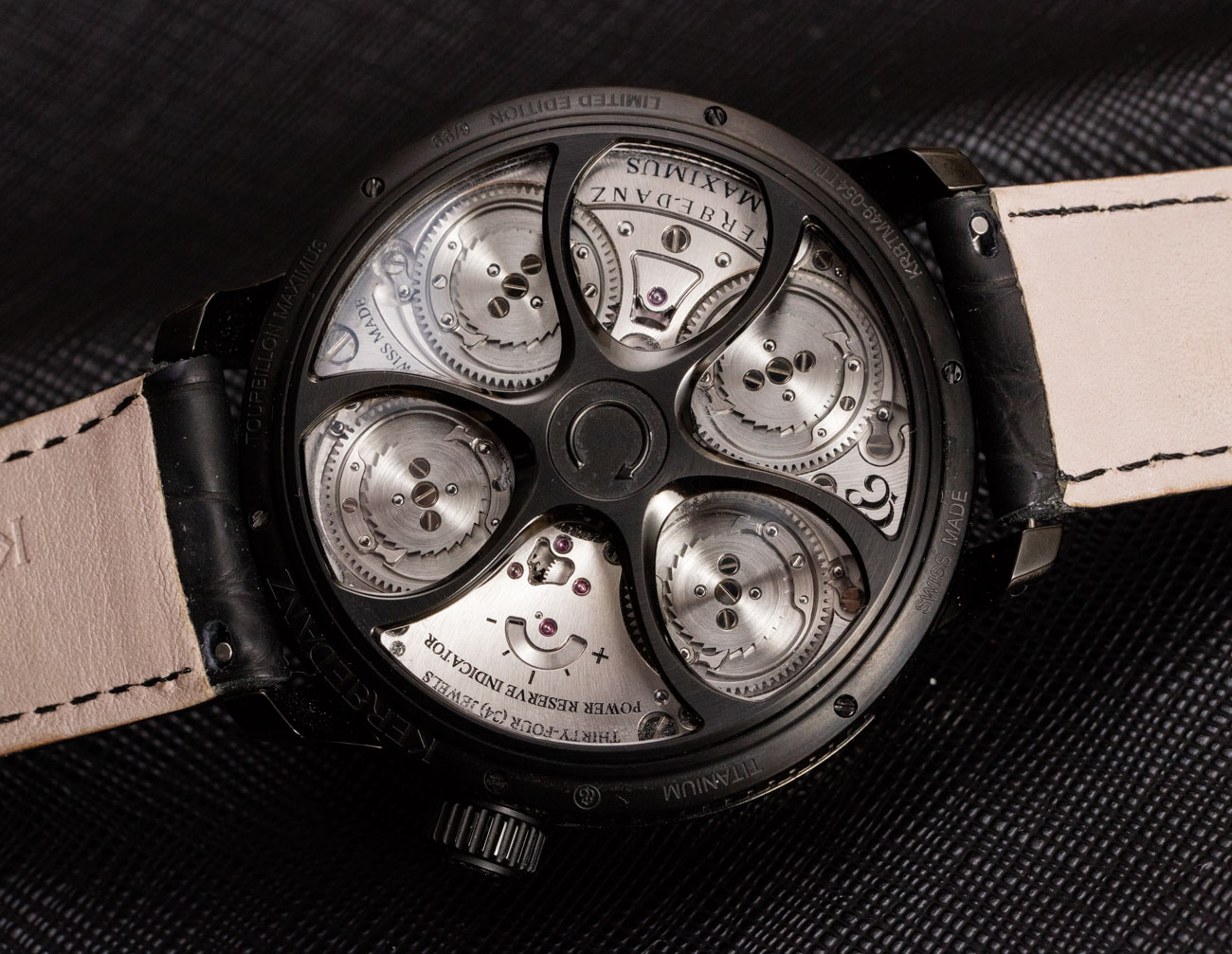 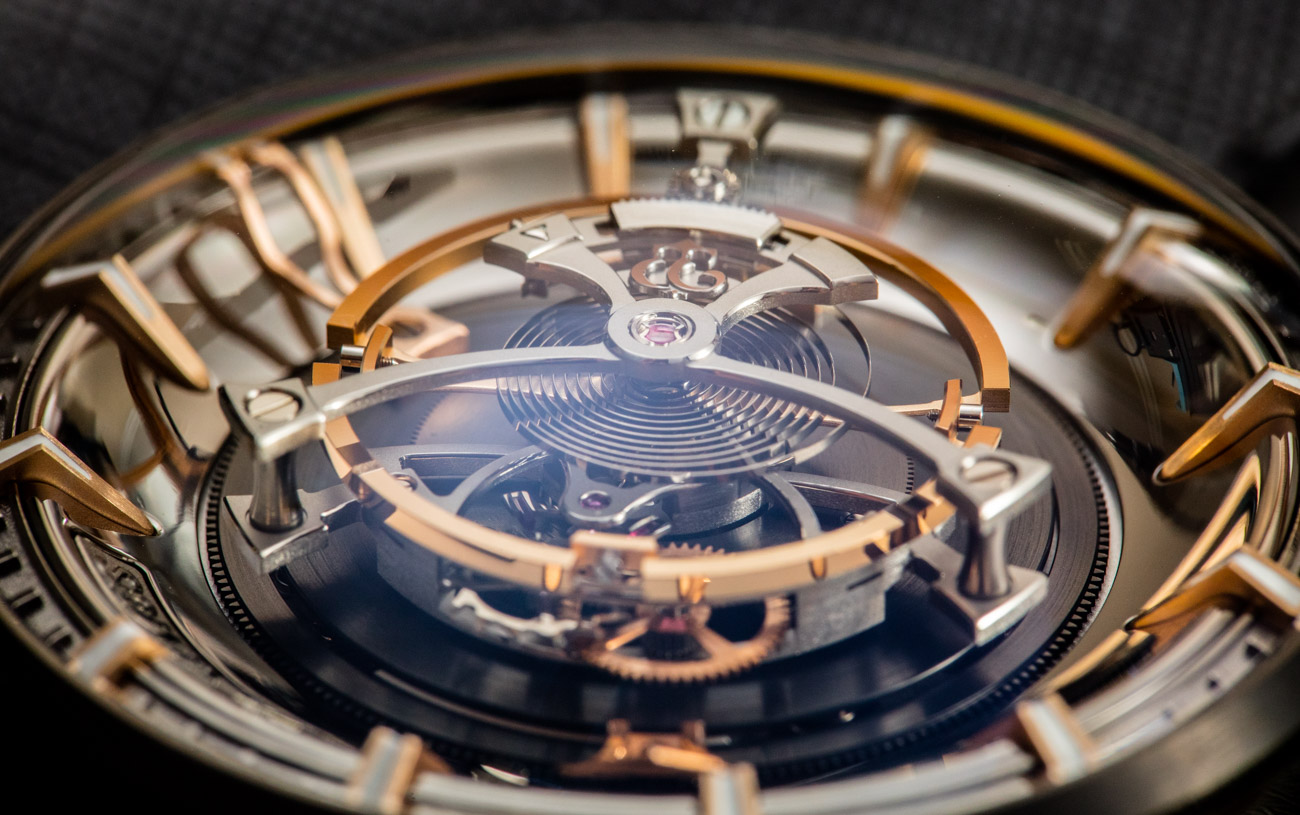 And I do mean willing wrists. The Kerbedanz Maximus is a polarizing watch because of the attention it is designed to elicit (and I’m not just talking about the full pave version of the Maximus with diamonds all over it). Rather, the open and spinning beating heart mechanism, along with the overall presence of the watch, does seem to suggest that its wearer is a force to be reckoned with. Why else would someone entirely eschew the world of established and more well-known wrist-worn luxury totem names for something that is traditional in flair, but novel in execution?

The previous “largest tourbillon” in the world claim goes to also Swiss Franck Muller for the Giga Tourbillon timepieces it is known to produce. The Giga tourbillon is actually a bit more of a traditional tourbillon in both operation and usage. It has a 20mm-wide tourbillon case that spins once per minute and is wound more or less normally. Kerbedanz ups the Giga Tourbillon’s girth by offering a 27mm-wide tourbillon, but this time one that spins more slowly — once every six minutes. The movement also does not wind via the crown (located out of the way at the 2 o’clock position on the case) but rather via a unique system on the rear of the case that requires you to wind a caseback wheel (of sorts) with your fingers. 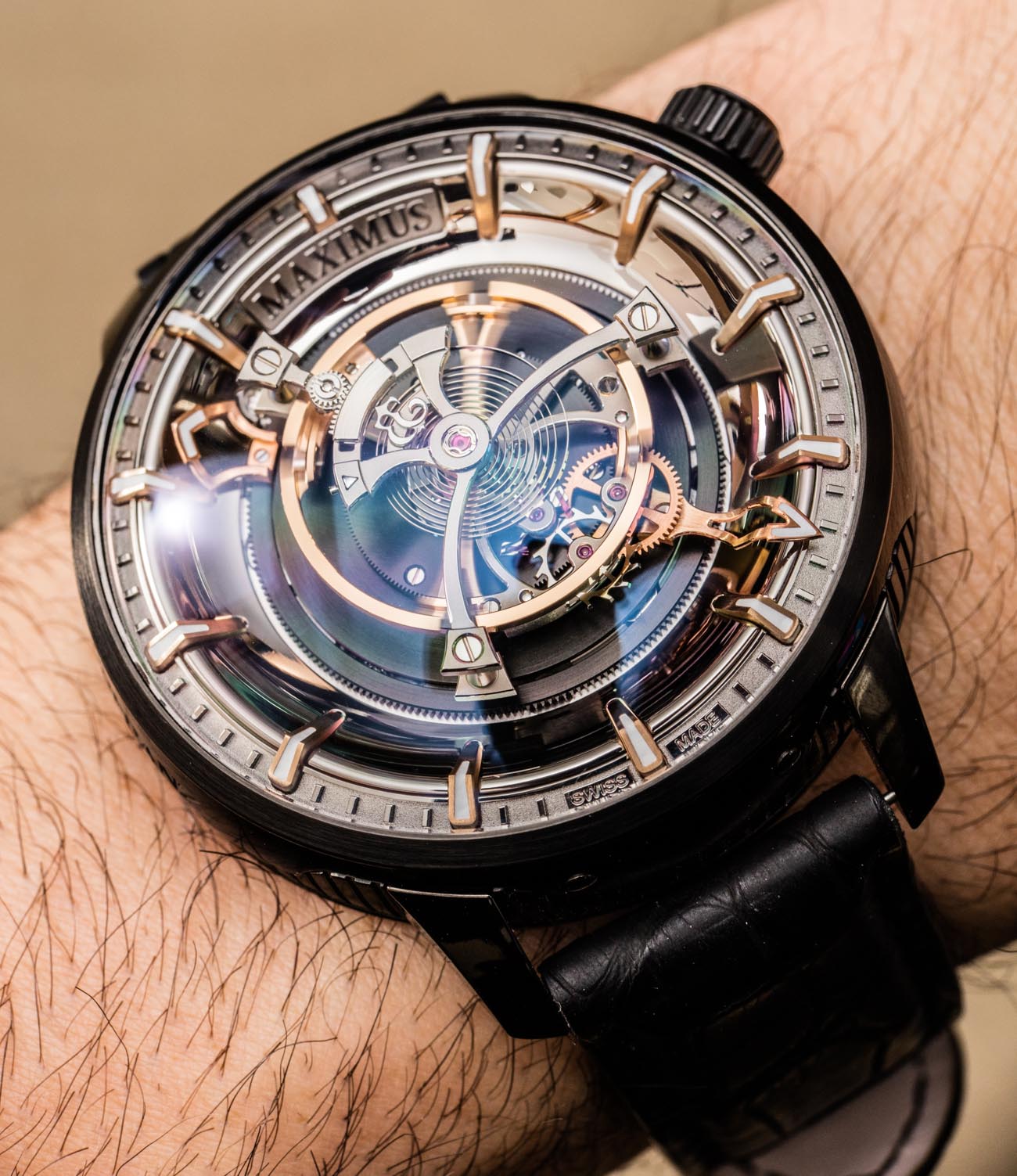 According to Kerbedanz, a traditional crown would not offer enough torque, and thus users would have to sit there winding and winding their time away in order to put enough power in the mainspring, which holds a total of 54 hours of power reserve. A small but handy power-reserve indicator is located on the rear of the movement and is visible through the sapphire crystal window.

Technically speaking, the rear of the Maximus watch is probably the most interesting to me — and I find winding the mechanism to be a particular pleasure, given the tactile feedback and pleasant clicks of the barrel’s gears as they turn. Just listening to the barrel gear clicks is enough to make you wish to wind it. I compare it to the winding system in the Ulysse Nardin Freak, which is somewhat similar in that you have to wind the caseback in order to wind the mainspring. Most Ulysse Nardin Freak watches have your finger directly turning a single mainspring barrel so the action is more or less silent and without feedback. In the Maximus, you are not directly winding one barrel but rather controlling a gearing system that winds all four barrels at the same time, which is why you get the nice feedback. Even with all that power, the exclusive caliber KRB-08 manually wound movement offers only 54 hours of power reserve, given its power needs. 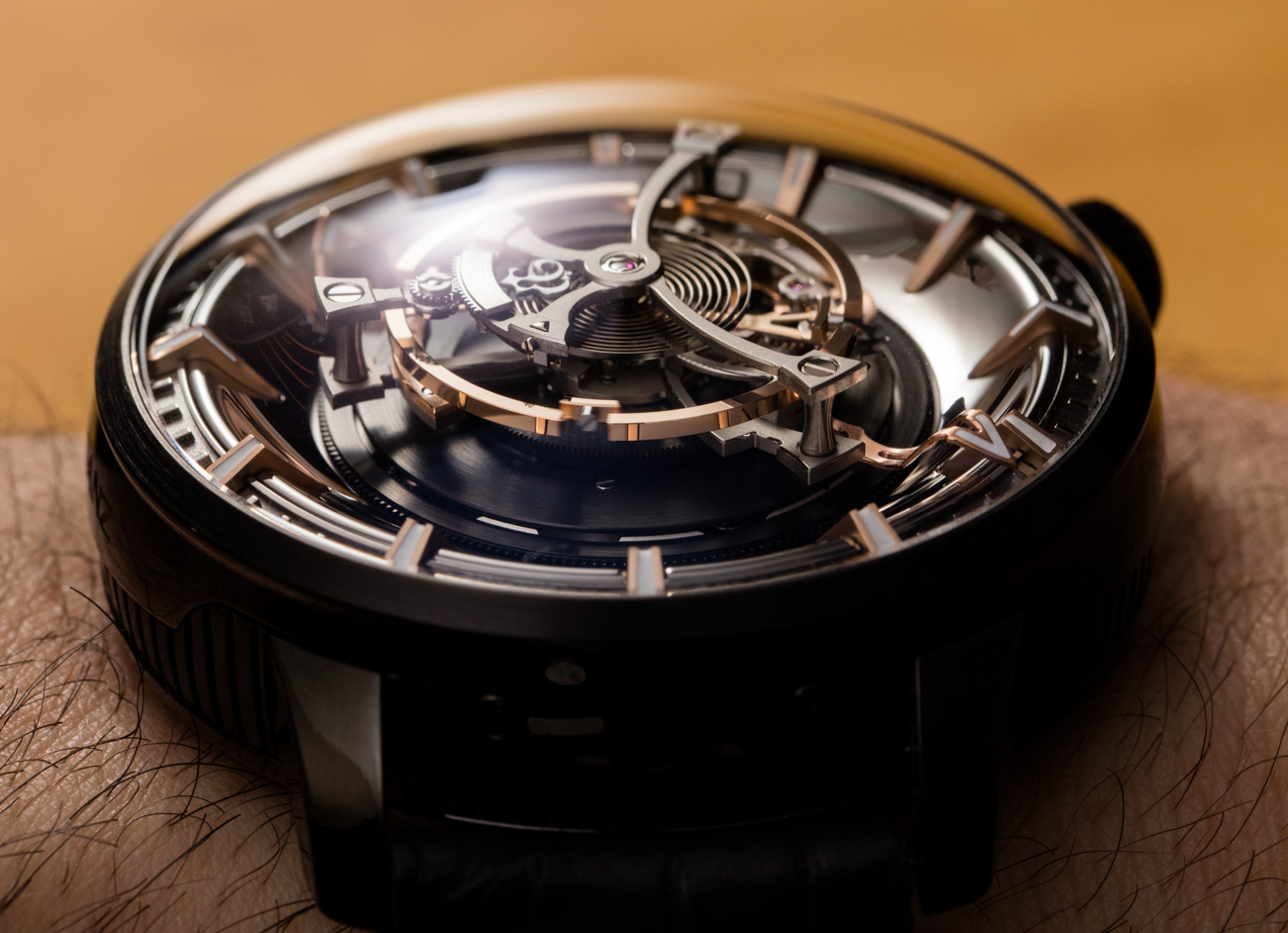 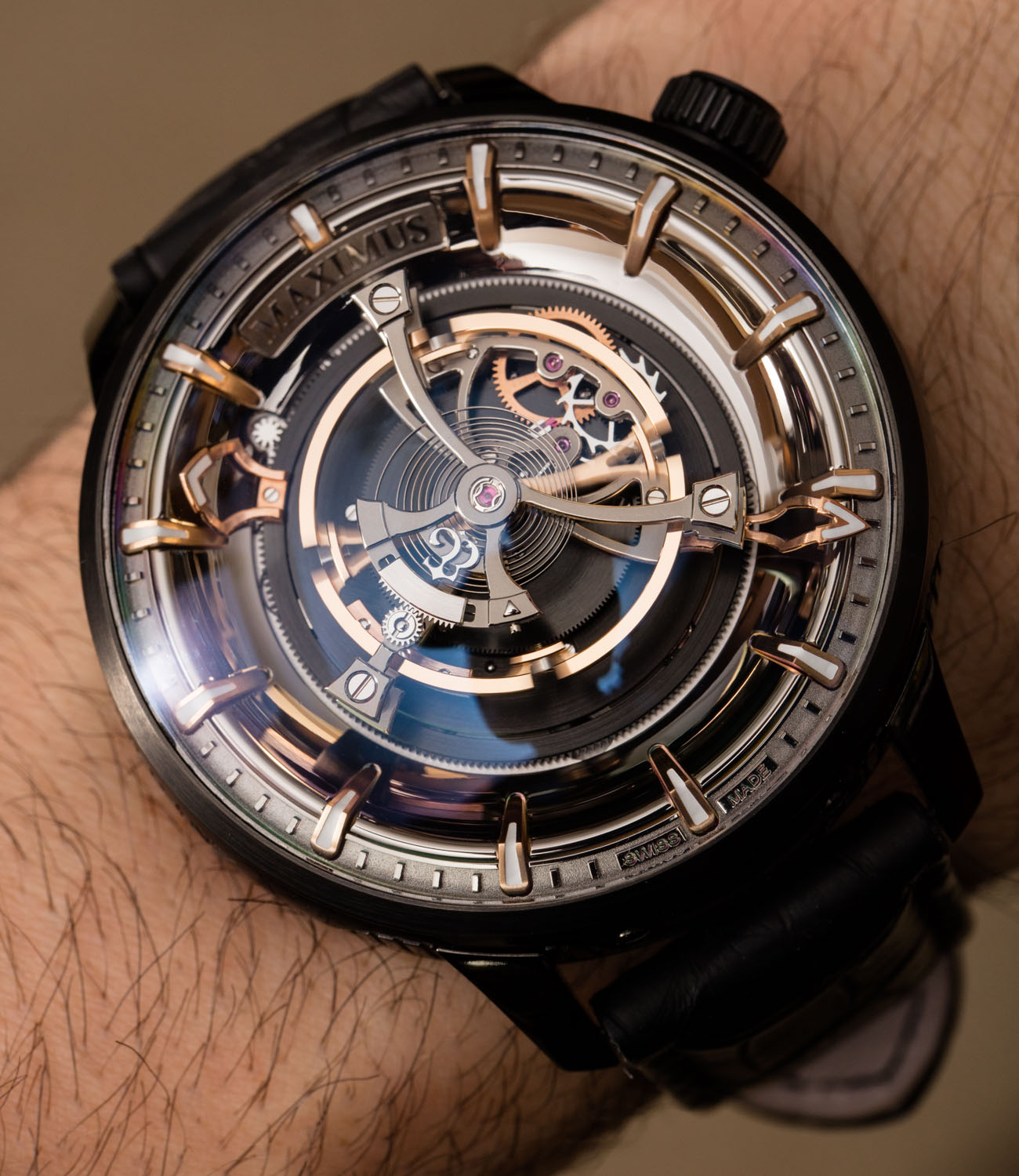 The KRB-08 movement is interesting and fun to both operate and watch, for sure. It has limitations and drawbacks, of course, given that it is really not a traditional wristwatch movement by most accords. The 415 mechanism is built on the towering 27mm-wide tourbillon case that uses 73 parts alone. The tourbillon spins once each six minutes as opposed to the standard one minute of most other tourbillons. Operating at 2.5Hz (18,000 bph), the balance wheel offers a pleasant view but the more slowly rotating tourbillon lacks a bit of the visual fun and animation of a 60-second tourbillon. One thing I would recommend to Kerbedanz for a future version of the Maximus (that there will no doubt be) is to determine how the movement might be adapted to allow for a 60-second (versus six-minute) spinning tourbillon.

The KRB-08 movement’s thickness allows it to come up with an interesting solution for how to have a central tourbillon as well as centrally mounted hands. The hands are mounted under the raised tourbillon case and are curved upwards. The user doesn’t see most of the hands but rather views the arrow-style tips of the hands, which are different for the hours and minutes. They follow the highly curved chapter ring that is given applied hour markers (here in rose gold-tone for this particular version of the Maximus). Note that Kerbedanz claims to produce its dials and hands in-house and that they are produced in gold.  I would not consider the Maximus to be an overly legible watch, but it does the trick pretty well. A more legible dial could easily be achieved by simply not skeletonizing the hands. I find it interesting that many designers these days choose to skeletonize hands specifically in order to have them blend in more with the dial, as opposed to having them stick out more in order to be legible. 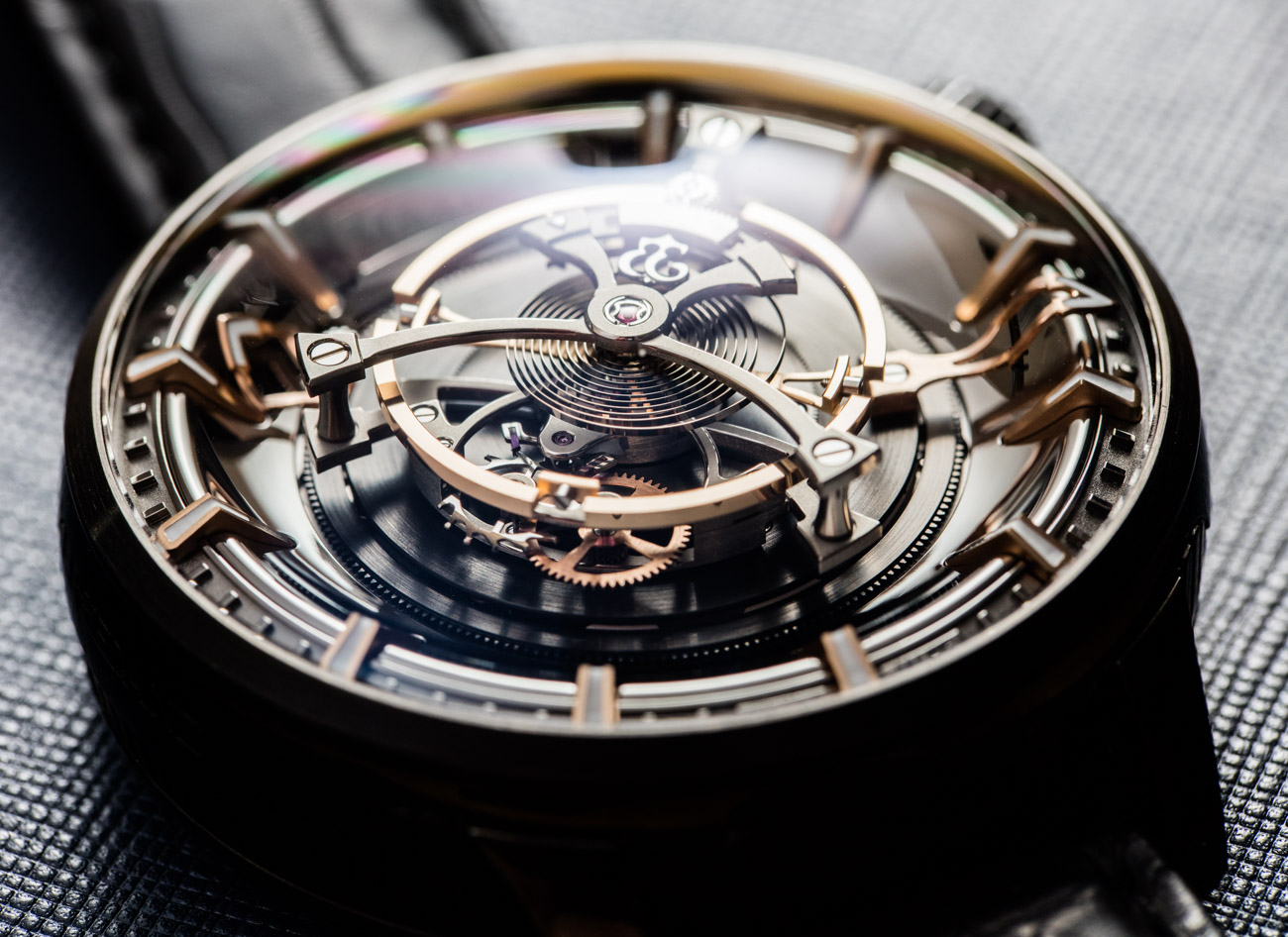 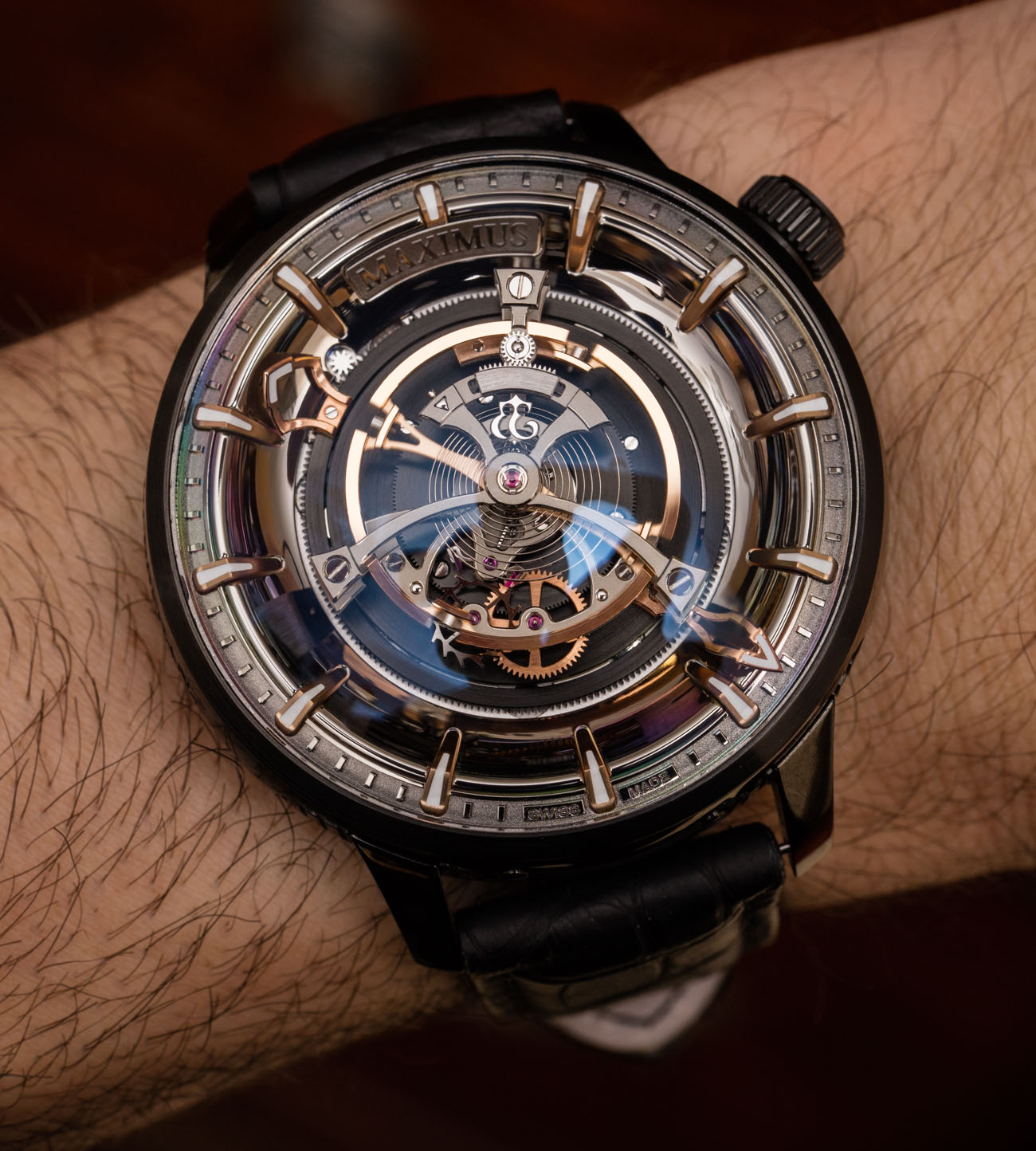 The best parts of the Kerbedanz Maximus are also some of its worst elements, depending on your perspective. If you value a practical, low-profile, and conservative timepiece, the Maximus lost you the moment it printed “Maximus” on the dial. In addition to the 49mm-wide (23mm-thick) case, which taunts sleeves, the mechanical mechanism isn’t particularly silent as it ticks the moments away. For those who want a more discreet wearing experience, the Maximus is going to be too loud visually and from an audio perspective. Those who want an attention-grabbing watch that will pique the curiosity of anyone else in the room who can hear it operating will delight from the experience of donning a Maximus during social situations.

Attached to the watch case is a nice alligator strap with a folding deployant and the Kerbedanz “K” logo. Kerbedanz has indicated that each version of the Maximus watch will be a limited edition of no more than 99 pieces. Some are even more limited such as the Royal Maximus, which is covered in baguette-cut diamonds. With low annual production (a few hundred pieces) and a lot of inspired designs (and customers), Kerbedanz is poised to become a lot more noteworthy among circles of exclusive high-end watch aficionados. After only a few years in existence, the brand has achieved quite a bit and I look forward to what they do next. This particular reference KRBTM49-054WL Kerbedanz Maximus in black-coated titanium has a retail price of 165,000 Swiss Francs. See more at the Kerbedanz website here.

Necessary Data
>Brand: Kerbedanz
>Model: Maximus (reference KRBTM49-054WL as tested)
>Price: 165,000 Swiss Francs
>Size: 49mm-wide,  about 23mm-thick, and about 53mm lug-to-lug distance.
>When reviewer would personally wear it: As a statement piece to impress those who are typically impressed by fancy estates, well-appointed vehicles, long yachts, and servants.
>Friend we’d recommend it to first: Bold-wristed watch-lover keen on making an impression with a high-end albeit not well-known haute horology timepiece.
>Best characteristic of watch: No other watch offers the wearer the ability to claim, “This is the world’s biggest tourbillon.” Visual interpretation of the concept is thrilling and technically the watch is impressive. Despite its size, the Maximus is surprisingly wearable.
>Worst characteristic of watch: Mechanism is loud and very power-hungry. Would be nice to have a 60-second operating tourbillon. Watch size and thickness make it best for occasional versus daily wear.