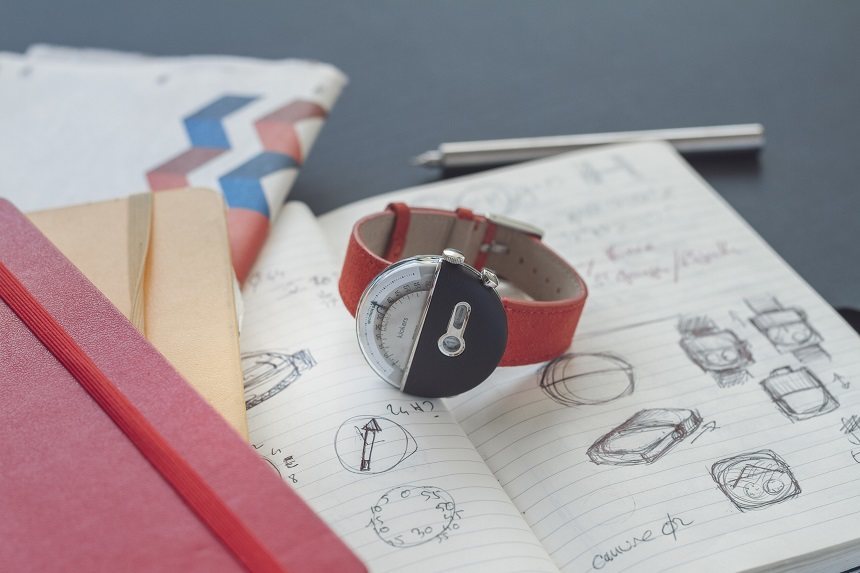 The world is awash with Kickstarter projects. This is good news for fans of watch design, as the emergence of crowd-funding as a viable start-up method has given new hope to small companies with a big dream. The impending release of the Klokers-01 and Klokers-02 watches prove that striking the right balance between innovative design and affordable manufacturing can reap rewards. But with a raft of other options available, do these new products offer value for money when stacked-up against their competitors? 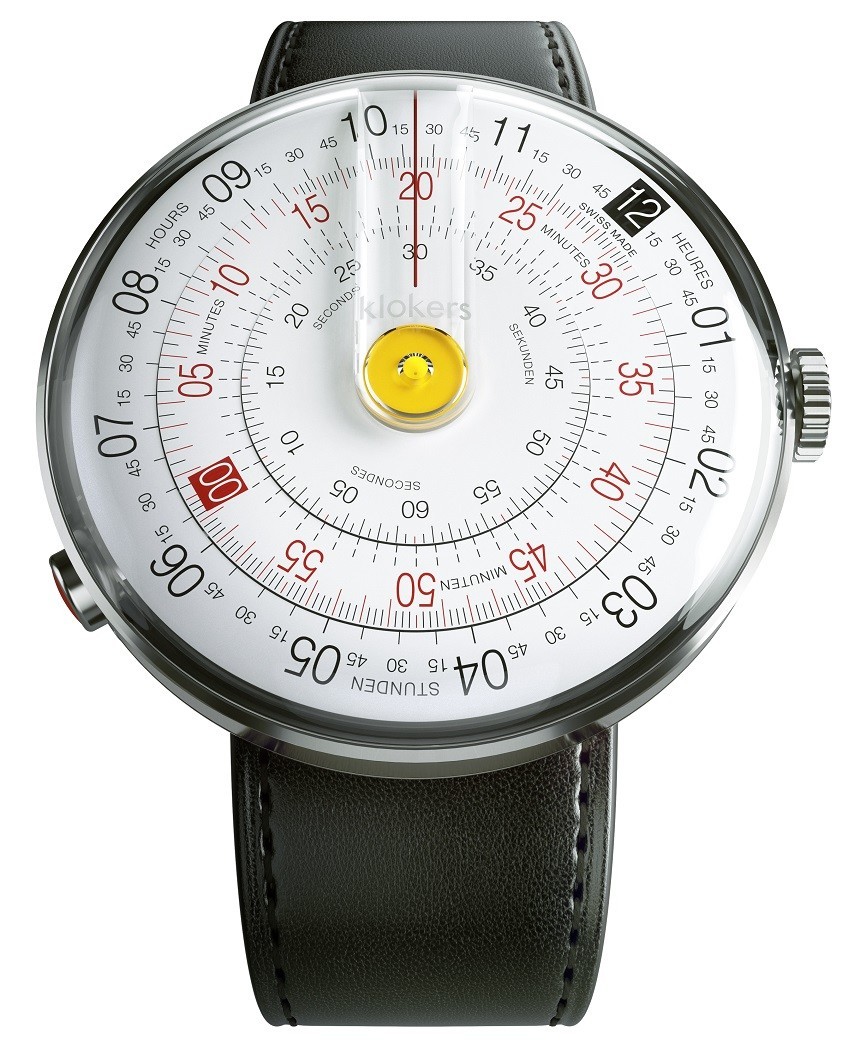 Klokers have focused on one of the best selling points of modern indie watch brands: customizability. With a twist and a slide, the whole watch head can be removed from the leather band with ease. There’s a neat video on Klokers’ Kickstarter page that shows two wearers exchanging their watch heads in a matter of seconds. Not only does the Klokers watch head attach to a traditional strap, but also to a range of other carriers including chains and fobs. Klokers wants to assert the ability of this watch to “travel through time,” presumably through its retro styling and its ability to attach itself to many different things, thus increasing its flexibility, usefulness, and general usability. 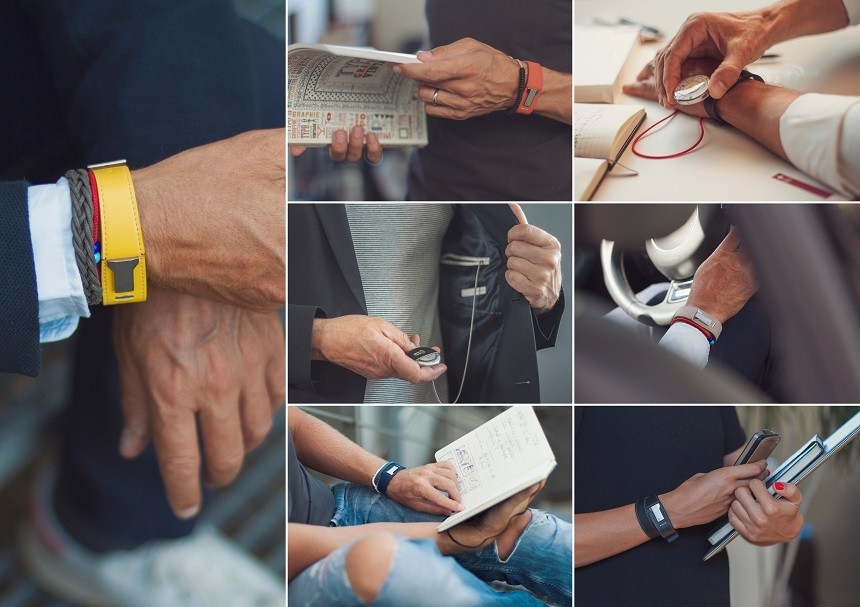 Klokers have patented the unique attachment system utilised by the Klokers-01 and Klokers-02. It’s a neat idea, but anything that easy to remove scares me a little bit, as I’d always worry it could be detached by accident, but their website claims rigorous testing has left them confident this will not happen. Of course, this would be a greater concern if the watch cost several thousand as opposed to few hundred bucks, but even so, it bothers me. In Klokers’ defense, the watch head figures to be incredibly light. With a case made of a metal polymer, a relatively thin mineral crystal, and the use of a quartz movement, there is not much about this watch that figures to tip the scales. 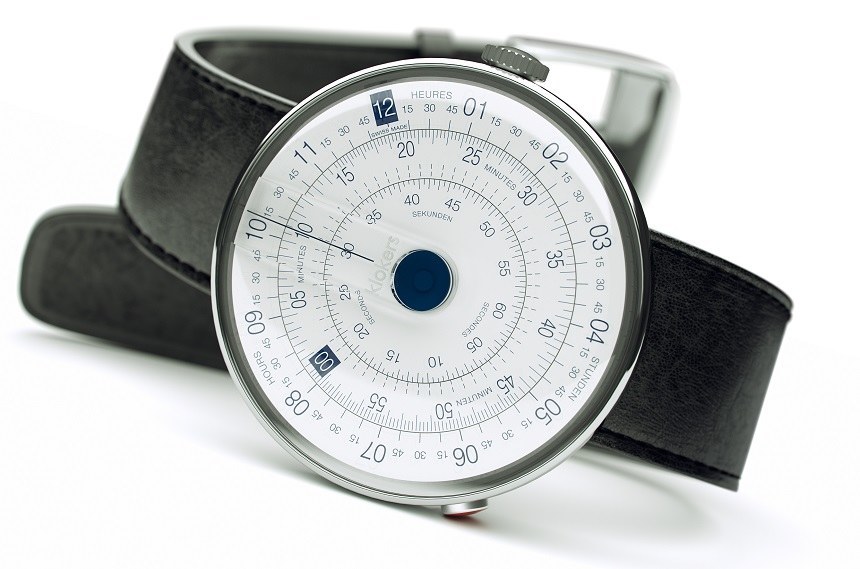 Talking of scales (possibly my best segue ever), both the Klokers-01 and Klokers-02 are designed to evoke memories of old-fashioned measuring instruments. The Klokers-01 is based on a slide-rule, with three rotating discs indicating the time by way of a magnified strip superimposed on the crystal. To me, it looks more like a kitchen scale rather than a slide rule, but I think that has more to do with the coloured hub – which is available in black, blue, or yellow – than anything else. The watch therefore has no hands, which gives the face a clean look. 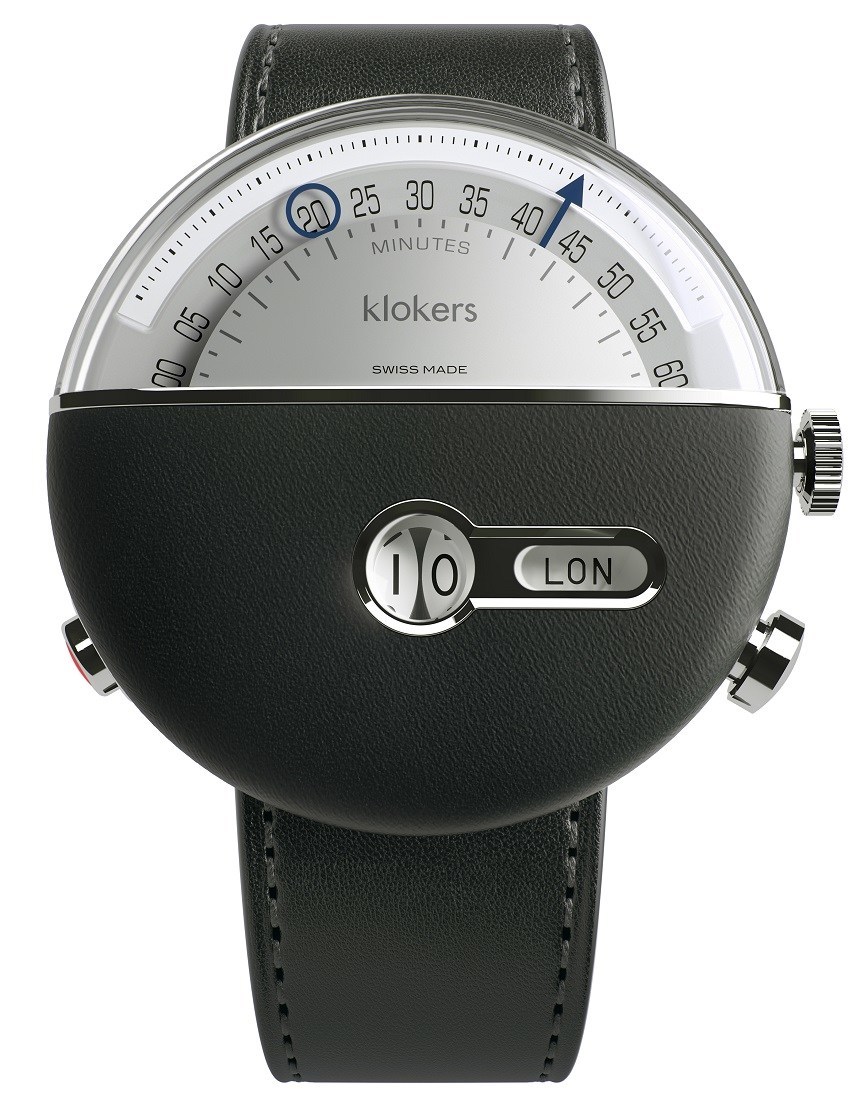 The Klokers-02 appears to be inspired inspired by bathroom weighing scales (those are scales you keep in the bathroom, not scales with which you weigh bathrooms). With more than half of the dial covered by a black sheath, the minutes and the seconds are indicated by two retrograde hands that work their way from left to right across the semi-circular indices at the top of the watch. The minute hand, which is hoop-shaped, advances once every five minutes. That means your watch is pretty vague about the time. It’s possible to count the journeys of the seconds hand as it makes its way back and forth across the dial, but that’s a lot of hassle. Klokers’ marketing team encourage us not to worry too much about the indistinct indicator. Instead, we should just take the time in between each advancement of the minute hand to relax. Awesome advice, assuming you’re not running for a train… 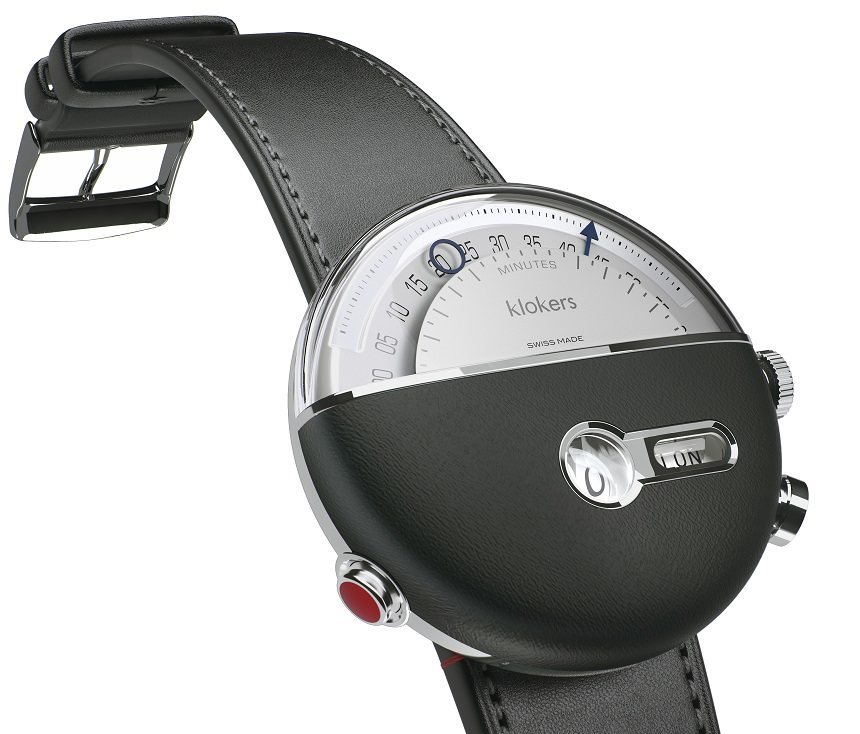 Additionally, the Klokers-02 displays the local time of one of 24 major cities around the world, displayed between the centre of the watch head and the traditional position of 6 o’clock. The jumping hour display can be set by the push of a button located at 4 o’clock. As well as advancing the hours, a three-letter code of the displayed city pops up in a window next to the hour indication. 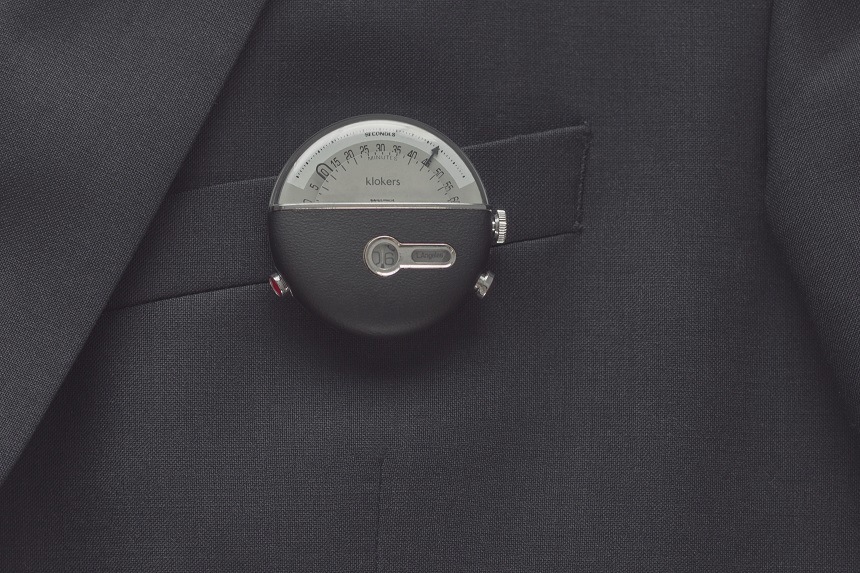 One of Klokers’ key marketing themes is to focus on the demographic-spanning appeal they expect their product to have. With some cool graphics on their Kickstarter page, they insinuate that this watch would look at home on the wrist (or in the pocket, or on the lapel) of practically anyone, once it has been paired with the correct carrier. It wouldn’t surprise me if these watches found favor with a female audience, because of the bright colours, eye-catching design, and opportunity to change its mode of use (the key-chain carrier could be used on a handbag, for example). 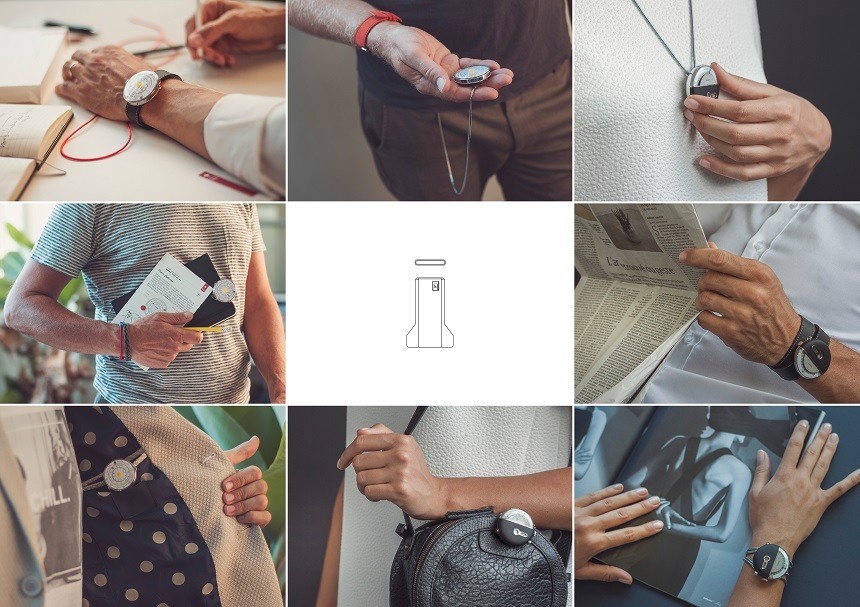 The watches are powered by customized Soprod movements, and are water resistant to 5 (yes, five) meters. The name itself is supposed to represent the community that will consist of the wearers themselves: The time-telling device is the Klok; the wearers, the Klokers. 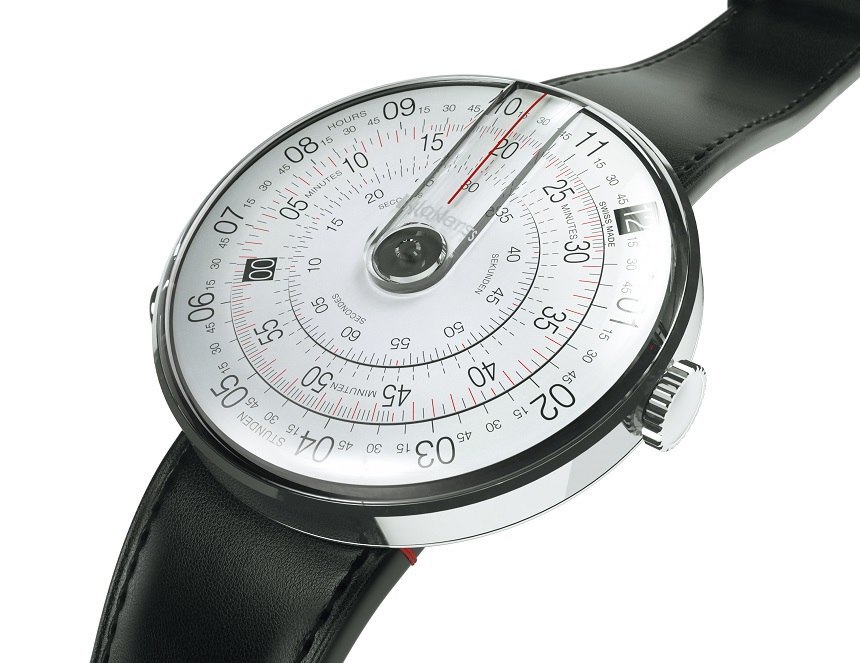 The Klokers case sits high on the wrist because of the quick release system, and with such an exposed crystal, I’d be concerned about catching it on something or scratching the glass excessively. But if instant customization is your thing, it’s probably worth checking out the Klokers Kickstarter and their website. With most of the super early bird offers all sold out, there’s still time to pick-up one of these curious watches at a decent price. There’s a few ways to go about purchasing them (in matching or mixed packs of two, for example), but the individual post-Kickstarter retail prices are as follows: The Klokers-01 has a prospective retail price of €349, and the Klokers-02 has a projected retail price of €985. Both watch heads come with one leather wristband in the colour of your choice. Currently, the Klokers-02 is available for €499, which is a significant saving on the full price. At this stage, this watch is not a bank-breaker. It’s not my favorite Kickstarter in this price range (I can’t help but think it fails to reach the stylistic level of the Nezumi Voiture which recently completed a successful campaign), but it does a good job of offering something different at a price that is unlikely to deter those who fall in love with it immediately. I would advise getting them now, before the Kickstarter expires, though, as the price jump, especially in the case of the Klokers-02 watch, is significant. klokers.com