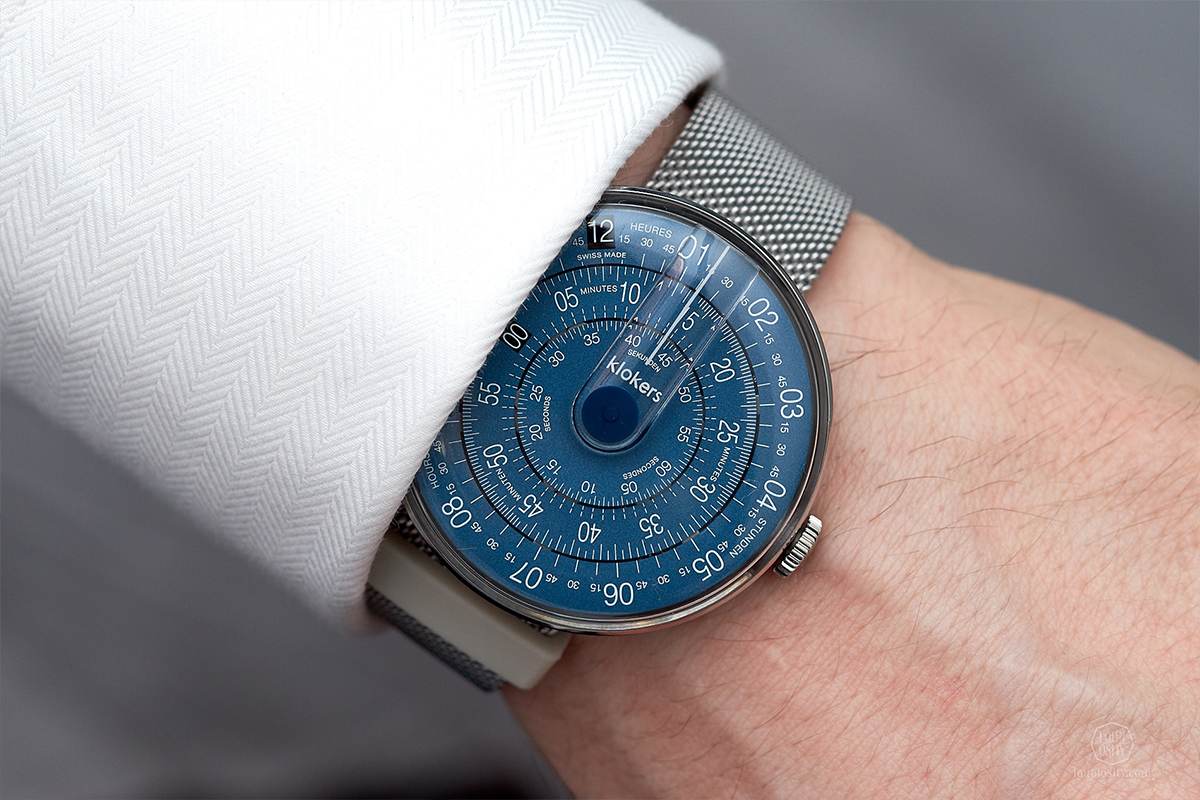 Good design can be found at any price and there’s no greater proof of that than Klokers’ funky but affordable Klok-01 watch. Let’s start with a quick recap for those not familiar with the brand. Klokers burst onto the scene in 2015 on Kickstarter with the Klok-01 and Klok-02 watches. These watches quickly became modern hits thanks to their unique design and interesting way of telling the time. The Klok-01, in particular, has become a hot favorite and is often recommended to anyone looking for an interesting but inexpensive watch. Now, there’s a new version that comes with a more somber dial and this is the new Klokers Klok-01 with a Midnight Blue dial. The basic ingredients behind the new Klok-01 Midnight Blue dial version is the same as the original Klok-01, but it is worth going over. The case is 44mm wide, which sounds large, but this watch doesn’t have lugs – so it actually sits smaller on the wrist than you might think. Thickness is 11.5mm, which is actually relatively thin. For reference, a Rolex Submariner is about 13mm thick.

The Klok-01 with Midnight Blue dial features the same patented strap changing system as the original Klok-01, which makes it easy for owners to swap straps. The downside to this system is that you need to get new straps from Klokers as your typical straps won’t fit the Klok-01’s case. Klokers will offer this Klok-01 with a variety of straps so buyers can pick the one that they like best. Obviously, the big change here is the dial. While the earlier Klok-01 watches have white dials, this new one comes with a Midnight Blue dial. Blue has been a very popular color for watches but more importantly, it gives the Klok-01 a completely different feel. While the white dial models were spunky, this new Midnight Blue version looks and feels more serious and understated. Time is still read the same way. Three separate discs denoting the hours, minutes, and seconds rotate around the dial and the wearer simply reads the time off the reference line on the piece of crystal that rises from the center of the dial up to 12 o’clock. The movement is a quartz variant from Ronda, which I have no problems with, especially at this price. Sure, a mechanical movement is nice, but then I suspect you will be looking at a final price that is many times greater.

If you have always fancied Klokers’ funky Klok-01 watch but found the white dial too striking, this new model is worth checking out. The Klok-01 with a Midnight Blue dial is priced at $575 and is limited to just 75 pieces in the US. klokers.com