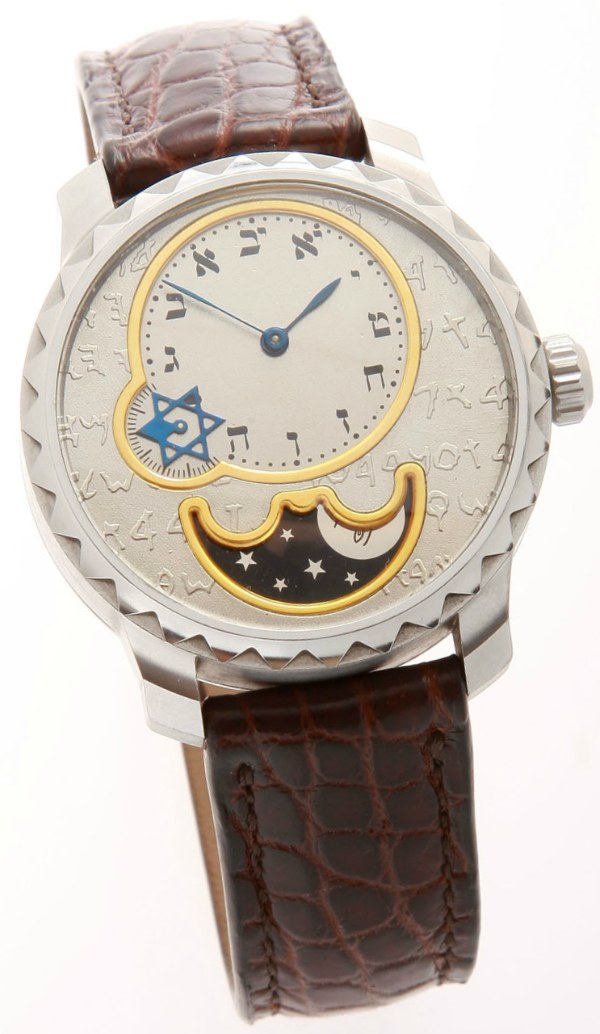 St. Petersburg based Russian watch maker Konstantin Chaykin is one of the independents that I watch closely. Their new watch for 2011 was the Lunokhod that I covered here. Though this Decalogue is a piece they released last year as a limited edition of 76 pieces. The watch is actually based on a large clock in Prague that also features Hebrew characters as the hour indicators. Like the clock, the watch tells the time with the hands going counter-clockwise.

This seemingly odd feature has to do with the Hebrew language, which is read right to left versus left to right. Therefore, to the left of 12 o’clock on the dial would be 1 o’clock versus 11 o’clock. Each of the Hebrew characters has a numeric property, so they do actually indicate 1-12 on the dial (just in the reverse of how most watches do). The result is a watch that basically indicates the time in the same, but reverse way as standard timepieces. 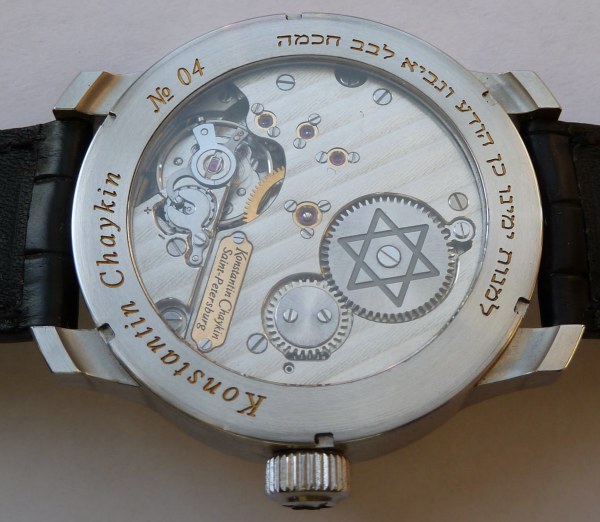 The name Decalogue is actually another term for the Ten Commandments – which obviously has religious significance in Judaism as well as other religions. Hebrew is based on Aramaic, and on the dial of the watch you’ll see Aramaic characters in addition to the Hebrew hour indicators. The piece also has the Star of David placed on it in three separate places. First as the subsidiary seconds dial, and then on the crown as well as engraved on the mainspring barrel on the movement. While the watch is clearly meant to be as an item of Judaica, it does not present itself as such in a cheesy way (well the Star of David seconds hand is debatable on that point). Actually, there is a version of the Decalogue watch called the Decalogue Rega that does not have the subsidiary seconds dial.

Inside the watch is an Konstantin Chaykin manufactured and designed caliber EVA01 manually wound movement. It is made with steel, brass, and other gold or platinum. The movement has a power reserve of 48 hours and features the time (indicated counter-clockwise) as well as the phase of the moon. This latter feature is appropriate because the Jewish calendar is a lunar versus solar calendar. 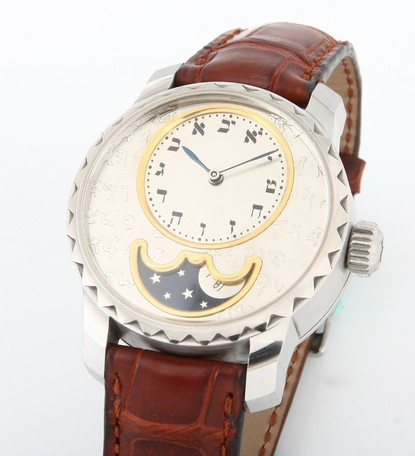 The Decalogue watch itself is 40mm wide in 18k white gold (also available in steel I believe). It is said to be also be made by Konstantin Chaykin. The bezel is designed to look a bit like a star with many (many) points. Crystals are sapphire and there is of course a display caseback. It is matched to an alligator strap.

As a collector’s item a watch like this will certainly have appeal to some people, and not others. The detail involved as a Jewish cultural watch is interesting, and I think that all people can appreciate the technicality and in-house made movement. Price is not entirely unreasonable at about $13,000 -$25,000, and you can see one available on James List here. 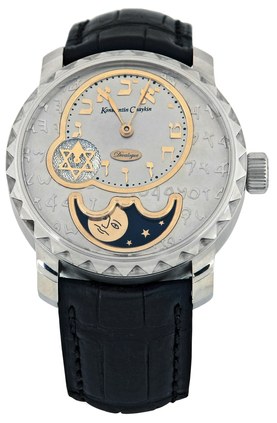 Vibration frequency of the balance: 21 600 wph

Power reserve: up to 48 hours

– the reverse system of the change (switch) wheels motion with the counterclockwise rotation and rotational axis displaced to the position “12 hours” (patented invention of K. Chaykin);

Features: transparent back cover, the crown is made in the shape of Magen David

Features: there are Old Testament tablets (Decalogue) in ancient Aramaic on the background

Hands: steel, blued by hand, second hand is made in the shape of Magen David