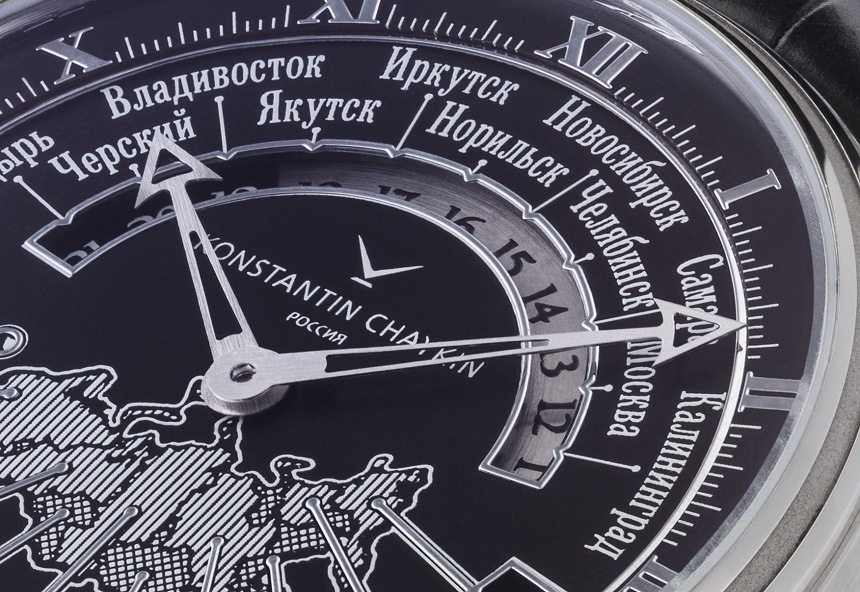 We’re used to the idea that Switzerland produces the finest watches in the world. It’s drummed into our minds from the moment our interest turns to watchmaking, and, to be fair to the Swiss, there’s a whole lot of evidence to back up that claim. But there’s an increasing body of work originating miles from the Jura Valley, in Eastern workshops packed out with old, but well-maintained machines, whirring away under the control of autonomous artisans, free from the staid and sometimes stuffy expectations of the Swiss industry. Konstantin Chaykin is one of Russia’s finest watchmakers, and the output of his small team is always sure to spur conversation. The Konstantin Chaykin Russian Time watch is certainly no exception to this.

Some will dislike the avant-garde, oftentimes meretricious timepieces that emerge from his cradle of imagination, but not me. In my opinion, the wares of this ever more established brand are united by their uniform quality, by an attention to detail that belies their small stature in the industry, and their willingness to do something different every time they put a new product to market. The release of the Konstantin Chaykin Russian Time watch showcases the brand’s ability to create complicated movements, but reminds us they care little about subscribing to convention. This complication, which uses two pad-printed discs rotating in opposite directions, could have been used for a more standard world timer set-up, but Konstantin Chaykin is proudly Russian and saw a gap in the market that he could fill, much to the delight of his fellow patriots. 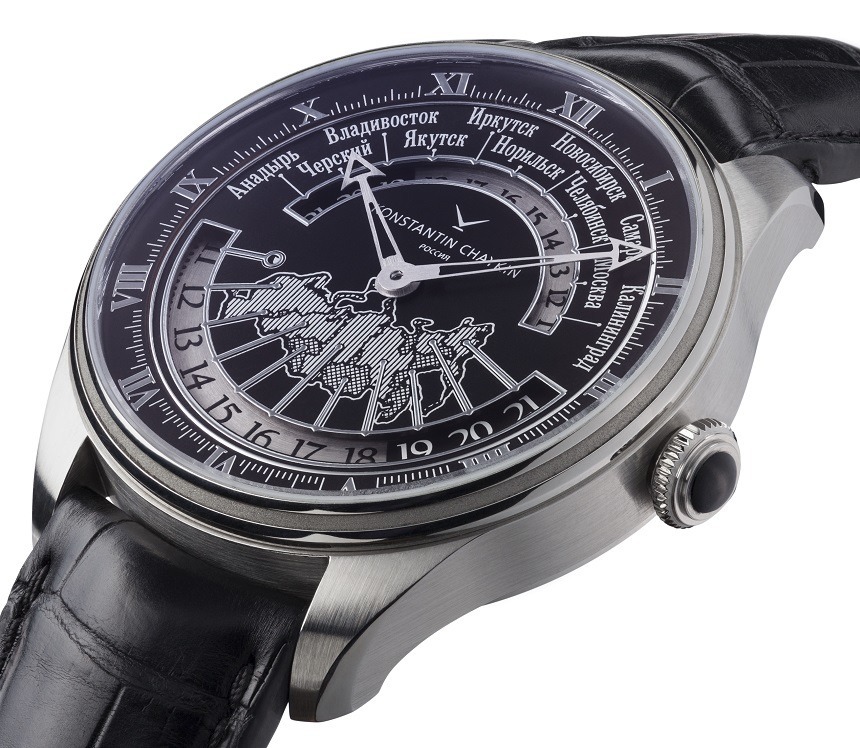 Now, I don’t know how good your Russian geography is (I must admit that mine is pretty sketchy), but the Konstantin Chaykin Russian Time watch, despite the arguable busyness of the dial, is pretty simple to figure out. Your local time, wherever you are in the world, is displayed by the polished hour and minute hands in the centre of the dial. The hours of the local time are displayed in a traditional fashion by Roman numerals encircling the dial. 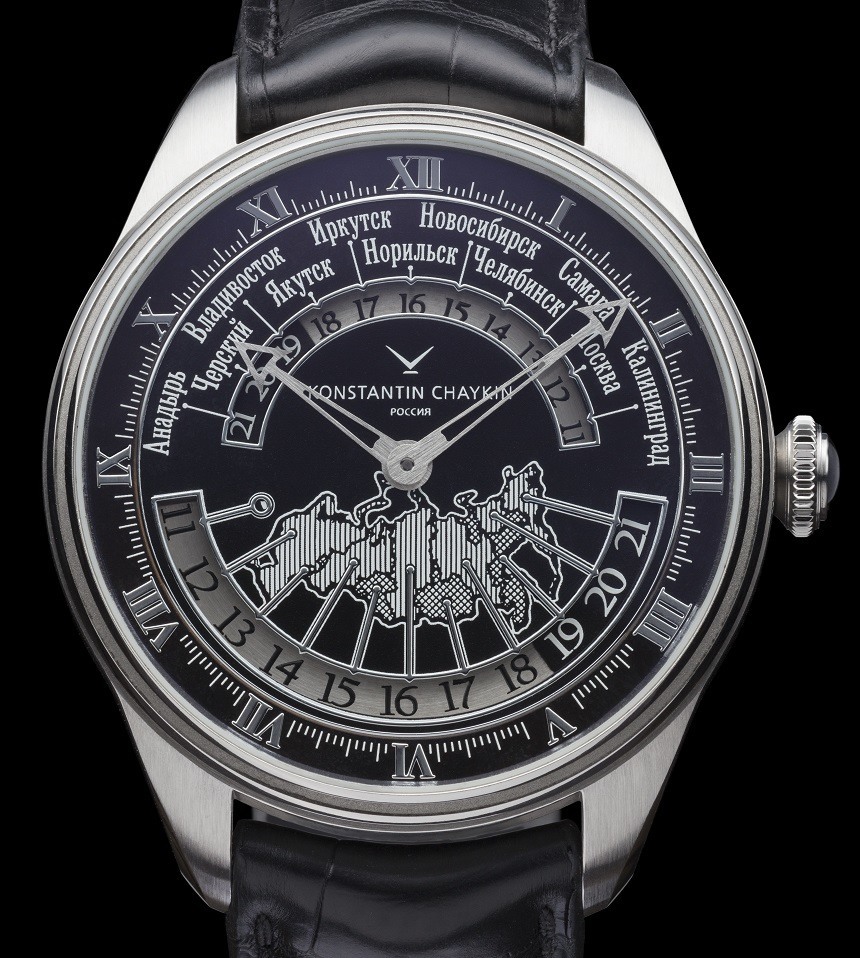 The hour markers are polished silver in colour and interspersed with small minute indices. If you look really closely at this, you’ll notice that there is a different number of minute indices separating the hour markers depending on the size of the Roman numerals. It’s more common for a watch brand to either standardize the space allowed for each hour marker, thus deforming the font to fit within its preordained parameters, rather than choosing a typeface and letting it breathe as has been done with the Konstantin Chaykin Russian Time watch. And, weirdly, rather than looking imbalanced because of the inconsistent number of markers in between the hours, the dial looks more balanced for its faithfulness to the hour indicators themselves. 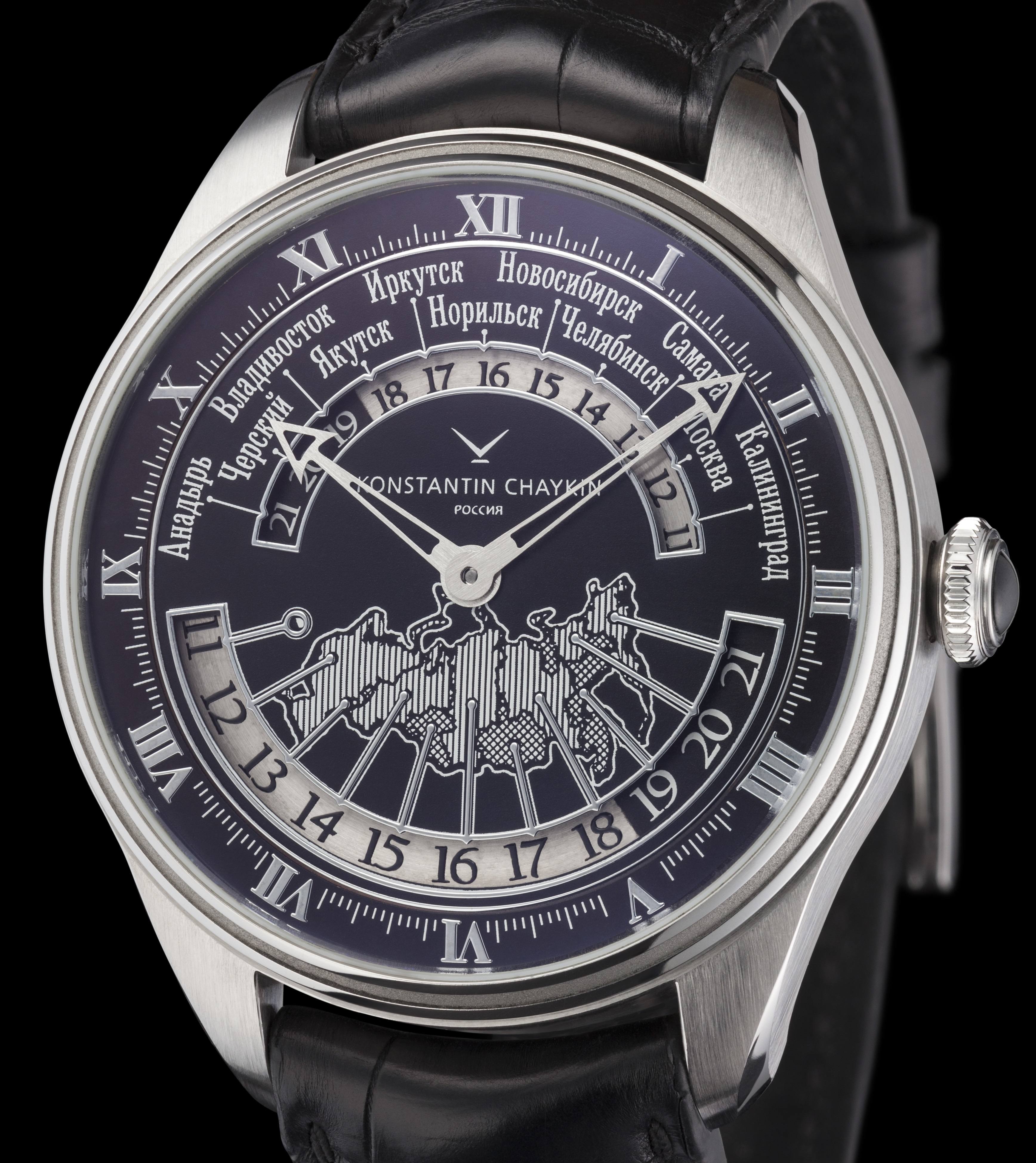 Okay, so on to the main complication of the Konstantin Chaykin Russian Time watch. Russia’s eleven time-zones are represented independently of the local time. They are: Moscow, Chelyabinsk, Norilsk, Yakutsk, Chersky, Samara, Kaliningrad, Novosibirsk, Irkutsk, Anadyr, and Vladivostok. A map of Russia on the lower half of the dial, is surrounded by a semi-circular window showing the largest of two time-zone discs. The disc, which features navy blue writing on a white background for the daylight hours, inverts at half past six to indicate the night-time hours. Extending from the time-zone window are eleven polished lines, each one pointing to a different Russian time-zone. The lines are spaced one hour apart, so to check the time of a particular part of the map, you just need to trace the line from it to the number on the disc. 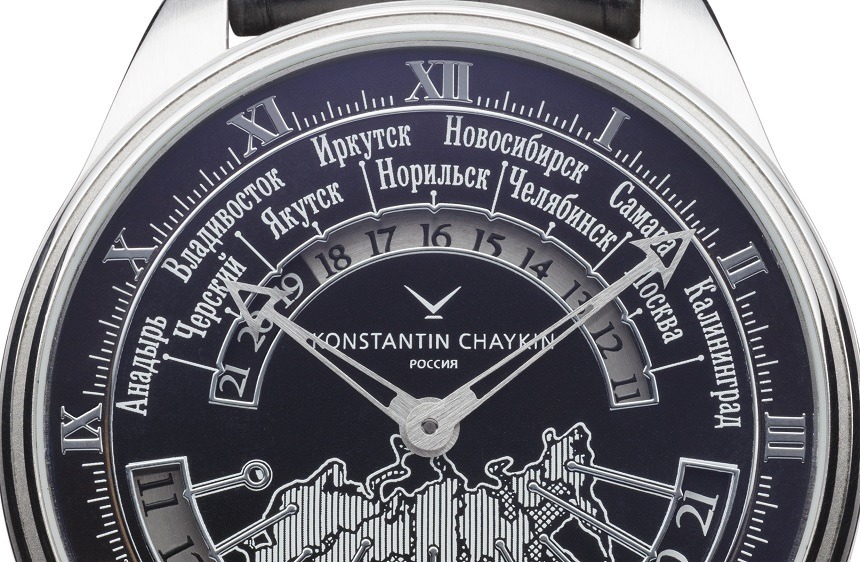 Occupying the upper portion of the dial is a smaller disc, which performs the same function, but uses prominent place names in each time zone instead of a graphical representation. Both discs rotate clockwise, but because the numbers are printed the opposite way up, the night-time indicator seems to advance from opposite sides of the dial as time progresses. This is a cool optical treat, and one I very much enjoy. 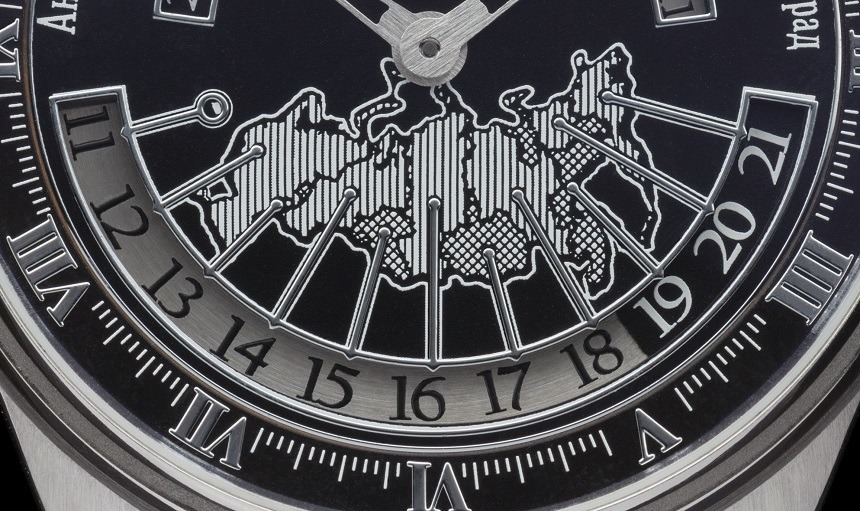 The Konstantin Chaykin Russian Time is absolutely one of the more understated and wearable pieces in the collection. Its color scheme is muted, and its 44mm stainless steel case, professional in style and proportions. The coin-edge crown is set with a coordinating jewel. The hand-wound K01-7 movement offers a 48-hour power reserve, operates at 21,600vph, and is revealed by the display case back. With a price of $13,750 for the Konstantin Chaykin Russian Time, this elegant and wearable watch is well-equipped to go toe-to-toe with its price-point peers. konstantin-chaykin.com