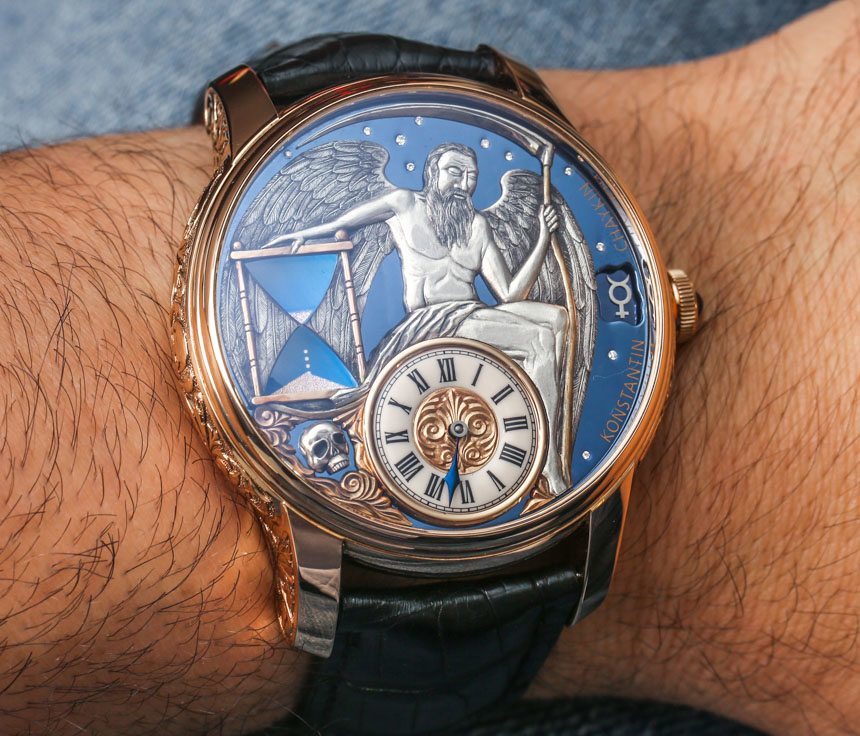 The Konstantin Chaykin Carpe Diem is a watch that provokes the mind with an unusual and fascinating question: what do we want to be reminded of whenever we check the time? Primarily – but not exclusively – at its higher levels, watchmaking has a purpose that goes beyond the documentation of hours, minutes, and seconds. When examined as works of art, watches are capable of challenging the way we view the world and – with a far-fetched association – our own mortality. The Konstantin Chaykin Carpe Diem watch, whose name means “seize the day” in Latin, attempts to do that in a most unusual and explicit way. 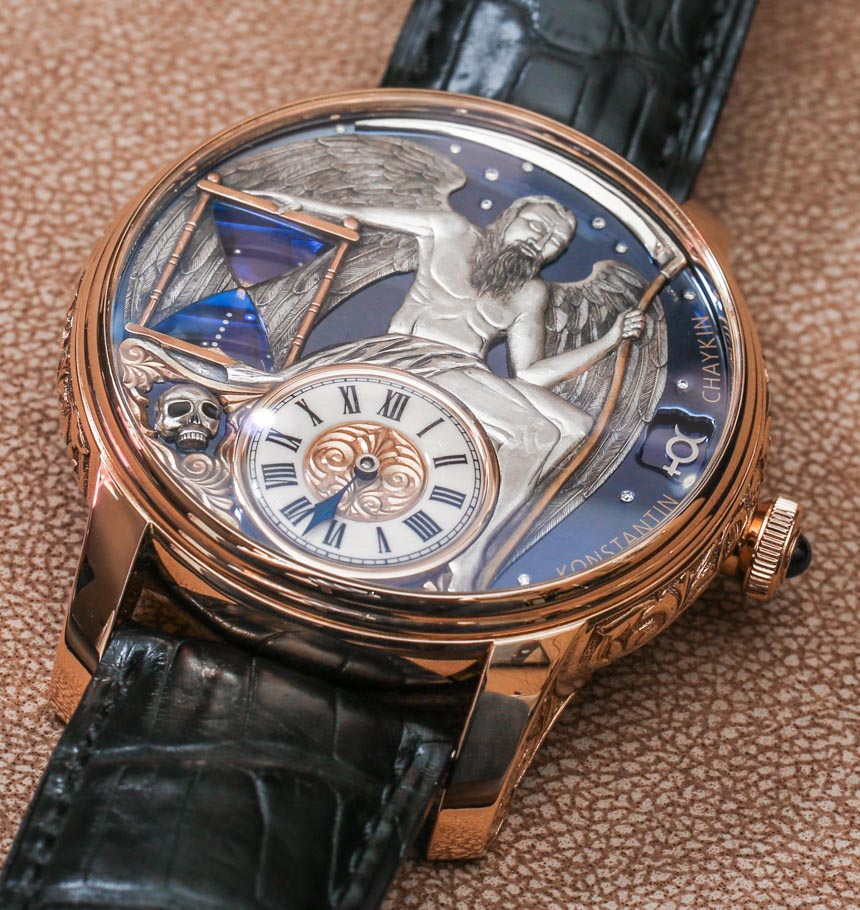 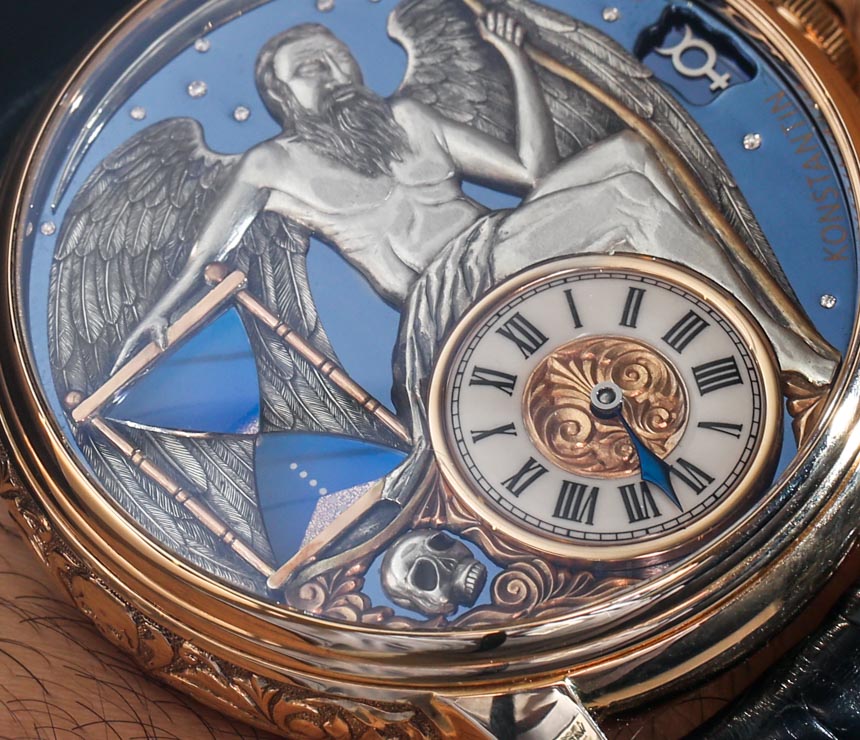 Although in recent years, we have been seeing more and more of these, it is still safe to say that few watches can boast such polarizing aesthetics – although an appreciation of how the complications marry with the message of the dial could win you over, if the meretricious display fails to inspire. As far as mechanical complexity is concerned, the big deal with the Konstantin Chaykin Carpe Diem is the hourglass complication that dominates the left side of the dial. Although no actual sand is used in the movement – for obvious reasons – the impression of an hourglass slowly filling as the minutes pass is achieved by an ingenious shutter system. This is a cute and undeniably well-executed notion, and a novel way to record time on the wrist. The downside is that it’s very difficult to read the time to the minute.

Rather than displaying each individual minute in a clear fashion, the lower portion of the hourglass – the part that is filling with “sand” – is marked by six dots running up the centre of the glass. Each dot represents ten minutes on the clock and when the tip of the sand passes each dot, another ten minutes has elapsed. Therefore, unless you have eagle-eyes or a micrometer at hand, the time can only be roughly estimated to the nearest ten minutes. 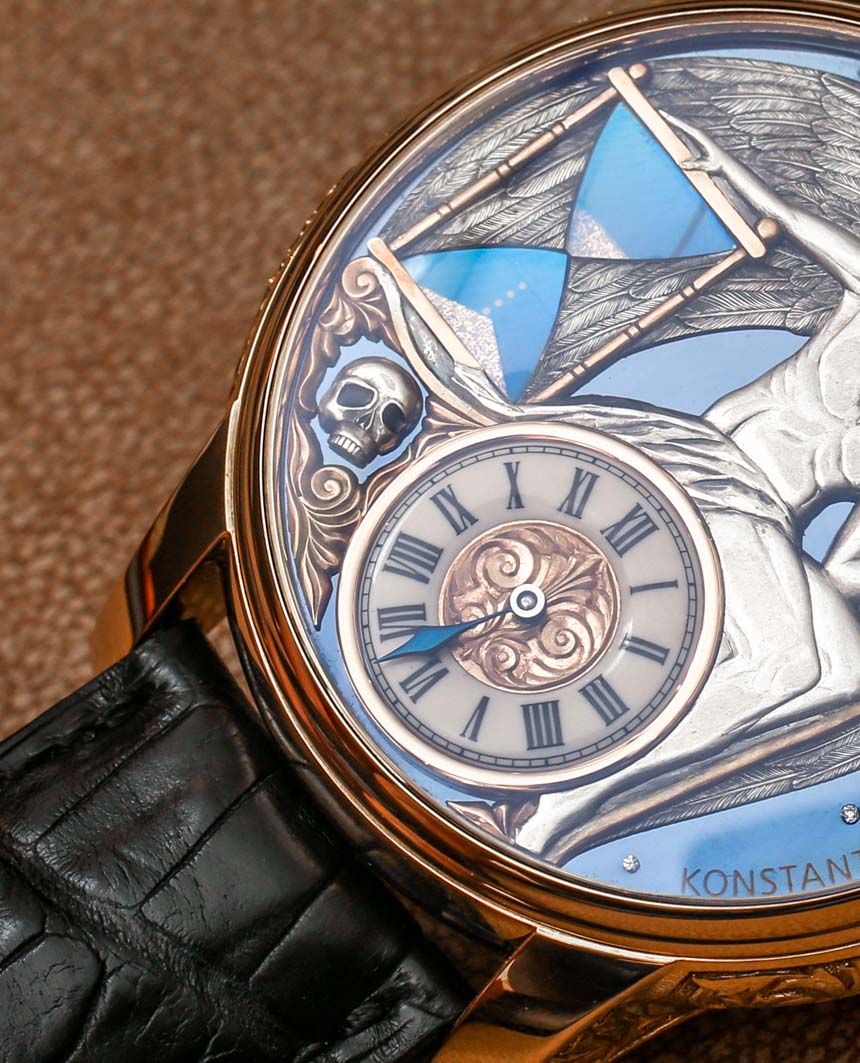 Thankfully the hour indication system is far more straightforward. At the six o’clock position a gorgeously enamelled dial, featuring black Roman numerals on a white background, is traversed by a single hour hand of flame-blued steel. The deep hand-engraving that decorates the centre of the hour dial links this component with the case and the surrounding filigree that edges the other dial elements. It is here that Chaykin succeeds in creating a comfortable and consistent aesthetic. 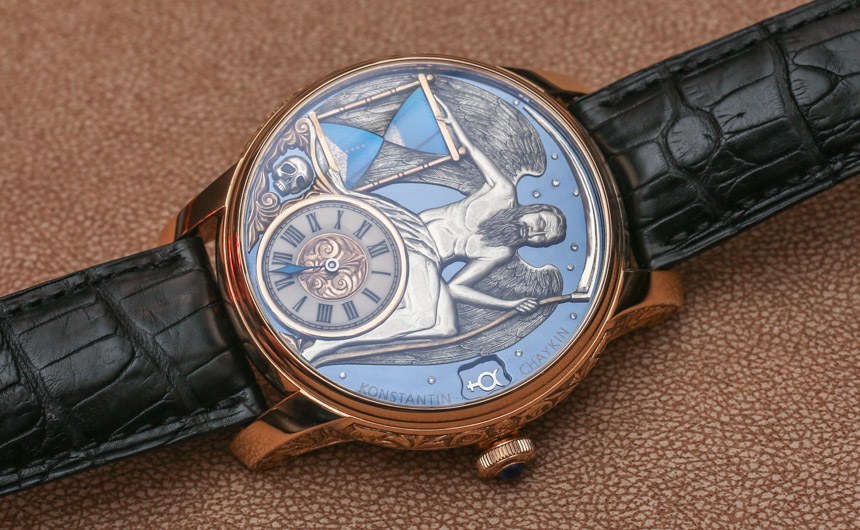 At three o’clock, there is a window indicating the day by way of its appropriate planetary sign. In antiquity, the seven moving objects visible in the sky (the Moon, the Sun, Mercury, Venus, Mars, Jupiter, and Saturn) were all given a symbol, which came to be associated with a day of the week (the Moon for Monday, the Sun for Sunday, etc.). This is a weird thing to look at, but once you get your head around the unfamiliar symbols, it’s actually a pretty clever addition. Unlike a date indicator, this complication will never need adjusting as long as the watch is kept wound. It has the longevity of a perpetual calendar without the bank-balance-busting movement. Bizarre but brilliant, from the Russian maestro.

So far, we have established that this watch delivers the time in a languid kind of way. It will tell you the day, but not the date; it will tell you the time, but approximately at best. Visual message aside, we can say this for certain: the Konstantin Chaykin Carpe Diem is not a watch that cares about the minutes or the seconds. It has much bigger fish to fry. 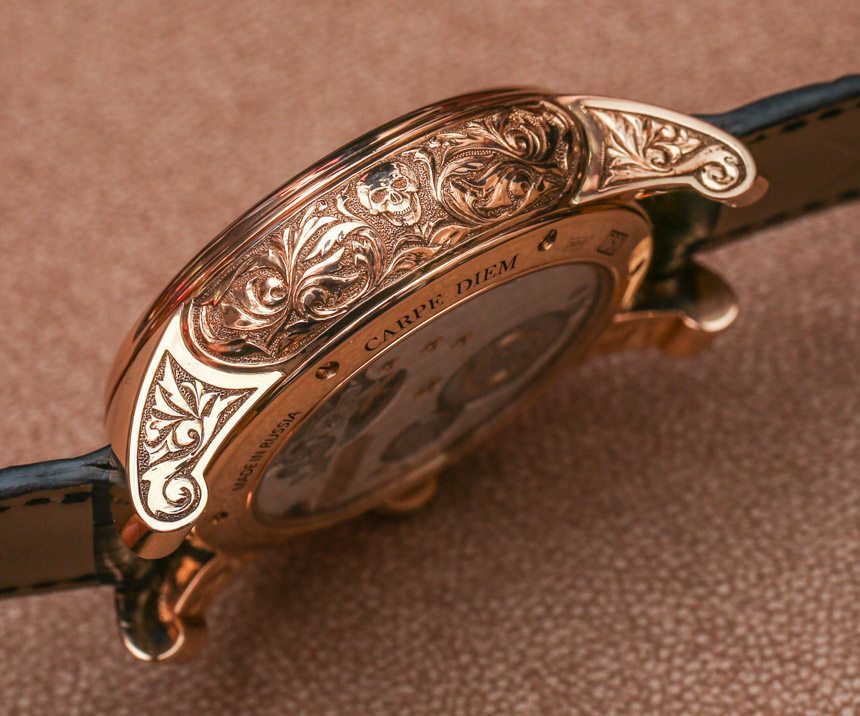 Covered in Vanitas imagery, the Carpe Diem encourages you to consider death and your own mortality every time you glance at your wrist. There is a skull nestled amidst some fine gold engraving at seven thirty, and another at nine o’clock on the side of the case. Beyond the – very trendy – skull theme, there actually is some very intriguing, and arguably more refined mythology on display.

Dominating the dial and the overall appearance of the timepiece, a re-imagining of Cronos, the God of time, sits dejected atop the hour dial. One hand grasps the scythe that will cut you down when the hourglass, on which his other hand rests, finally runs out; and behind this morbid scene, we can see that the end has come for daylight too. A night sky of expertly blued steel, studded with eleven diamond stars, provides a stunning contrast between the 18k rose gold and sterling silver relief of the dial. 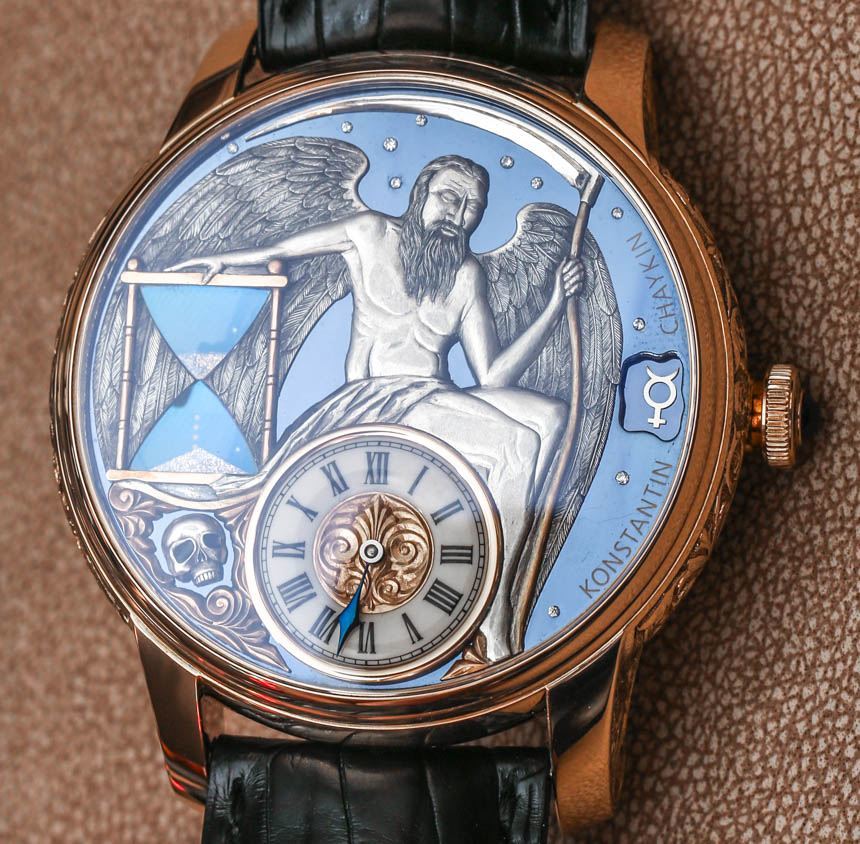 Vanitas, a symbolic art form, is concerned with the temporary nature of life on earth. Although it seems depressing, it highlights the importance of the time we have. In a strange kind of way, funereal imagery enhances the beauty of life by way of a contrast. If the answer to the question posed in paragraph one was “The beauty and brevity of life,” then maybe this watch will strike a chord with you.

Chaykin appears to have achieved a rare and successful balance with the Konstantin Chaykin Carpe Diem. He has produced a watch that is boldly consistent with itself in not only style, but function as well. His blasé treatment of the passing minutes is as powerful a reminder as the skull itself: we should get on with living and not sweat the small stuff.

But as much kudos as he deserves for a well-realized concept, has he succeeded in creating something that is wearable and actually nice to look at? From a practical point of view, this watch is large – 45 millimeters to be precise – and far too thick to be slipped under a dress shirt cuff. For me, its mammoth proportions make it much too noticeable. I love the strict adherence to a uniform aesthetic, but this watch would have benefited from being small and slim, subtle and sleek, not brash and bulky. Its hulking case leaps off the wrist and right into the face of its audience. I wanted it to be more like the Vacheron Constantin Métiers D’Art Perspectives D’Art Dove, which measures a much more discreet 40mm in diameter and 11mm in thickness. Instead, it has all the ostentation and none of the reserve. That is not to say it fails to make a statement, it’s just that it seems to shout where, the way I see it, a knowing smile should do. 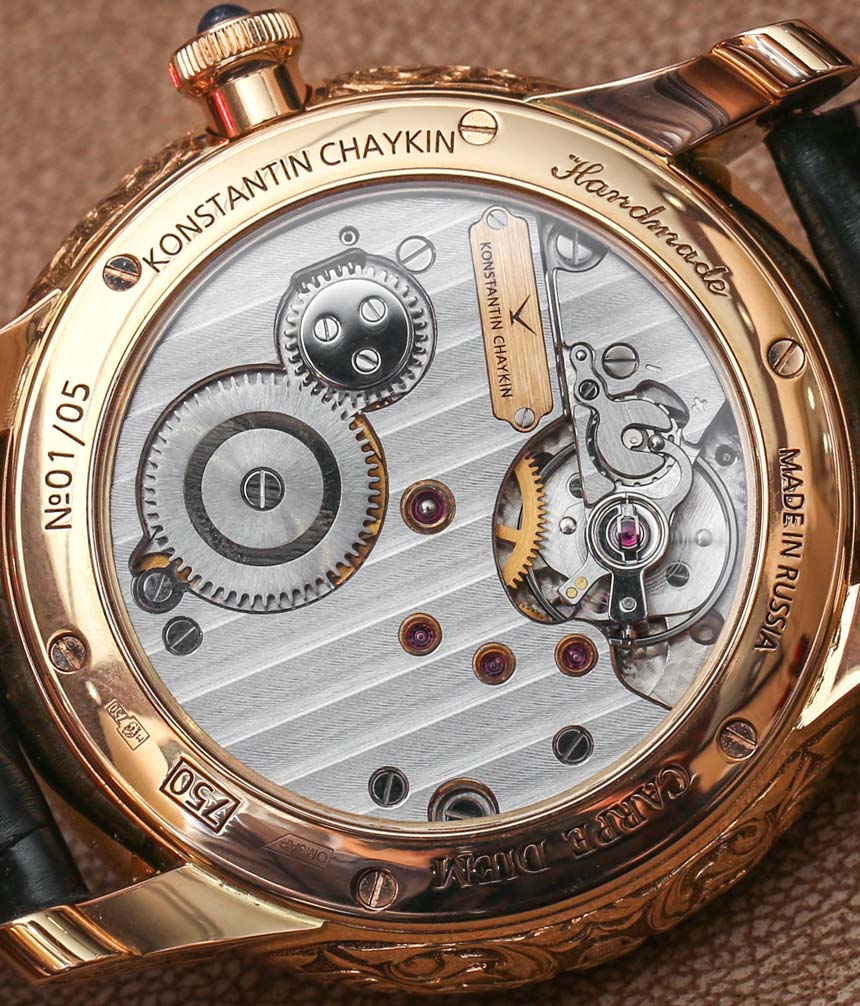 However, that is an ironically small complaint. In reality, the Konstantin Chaykin Carpe Diem is big because it has to be. Its custom calibre and literally unique time display insists upon it. The movement can be seen through a generous glass case back and is, somewhat surprisingly, tasteful and reserved in finish. Rather than feeling like the creator ran out of steam by the time he reached the back, it is a welcome respite from the eccentricity of the dial and the extensive engravings of the gold case. 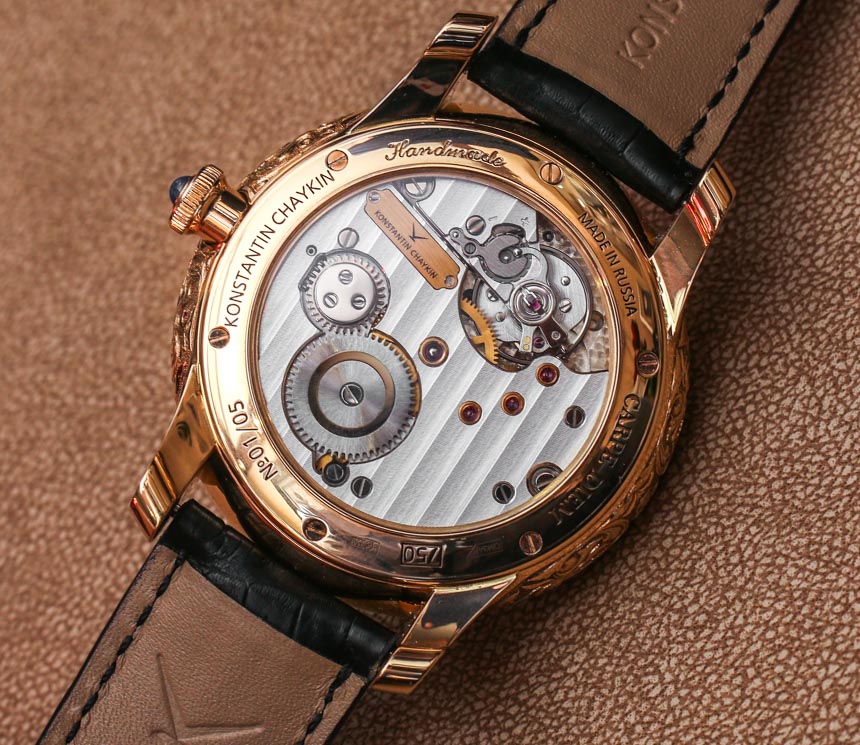 The price for the Konstantin Chaykin Carpe Diem is €60,000, which is quite a lot for a watch with a relaxed attitude towards timekeeping, but arguably a fair amount for a functional work of art that references the past of the industry as well as the future of the wearer. It is ridiculously profound and profoundly ridiculous. But it is beautiful in its own well-defined way and a very welcome addition to horology’s ever-growing catalogue of curiosities. konstantin-chaykin.com