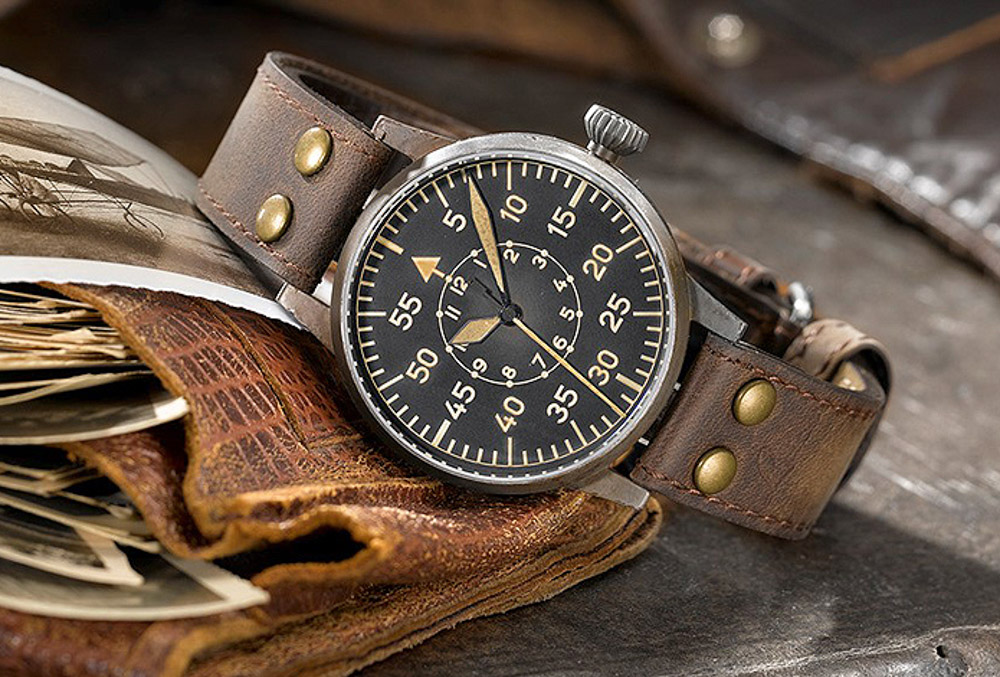 German Laco watches aren’t a brand I discuss too often, but if you are in the market for a traditional-looking German military watch, it is one of the brands you should be looking at – especially given their prices. I recently learned of a rather interesting/amusing sub-collection of their Flieger vintage-style pilot watches which exhibit an interesting level of effort not commonly seen in commercially available timepieces. Not that these “heirloom” (what “erbstück” translates into) Laco Flieger Erbstück watches certainly aren’t for everyone, but they are worth learning about.

In a nutshell, the Laco Pilot/Flieger Erbstück watches are hand-aged to make them look like used, antique military watches. Yes, in essence you are paying for someone’s time and effort into handcrafting scratches, scrapes, wear, discoloration, and age. To some people this is total madness, and for others this is the perfect way of getting a particular aesthetic look that would otherwise be totally impractical in searching for an actual old German pilot watch. These watches should however go nicely with a pair of designer ripped jeans. 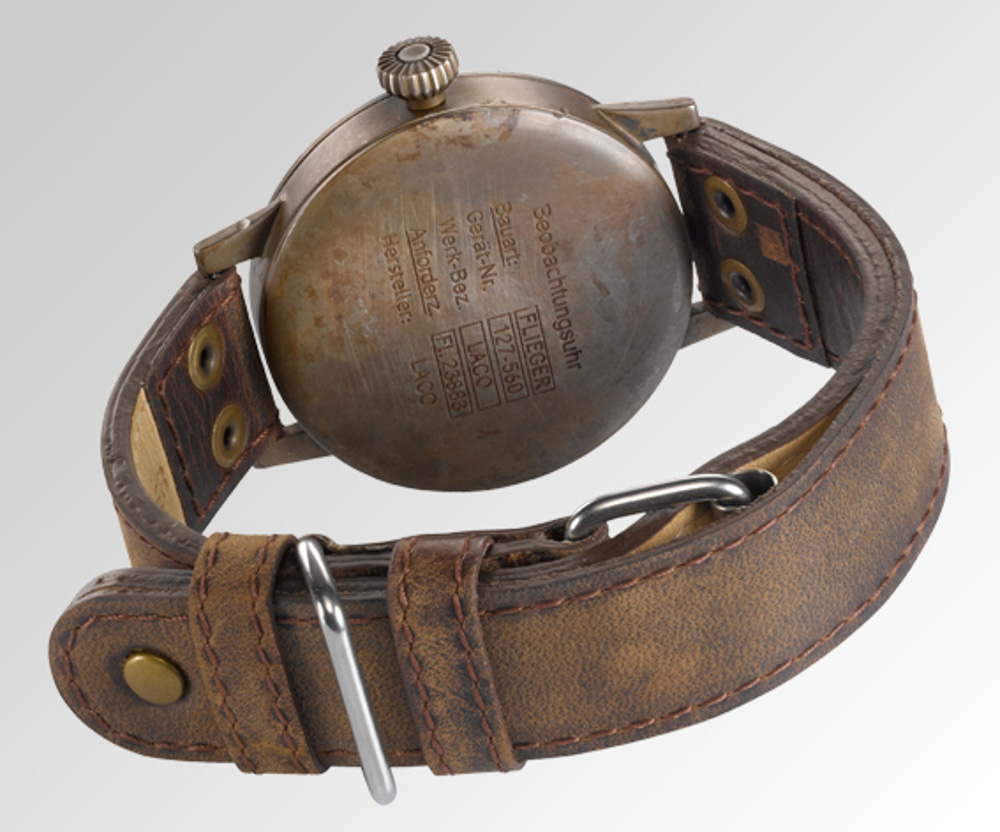 I will say that even though these watches are near double the price of their “new looking” cousins also produced by Laco, at around $1,500 the price is fair given the effort and underlying watch. If there is anything that Laco suffers from, it is having a bit too many products without a clear message to its customers of which one is right for them (or even how the watches all differ). Before talking about the specific models in the Erbstück collection, I want to comment that Laco also has a different collection of “Used Look” military-style watches which follows a similar theme. With that said, if the Used Look collection has an aged look, the Erbstück collection has a “seen combat on more than one occasion in World War II look.” 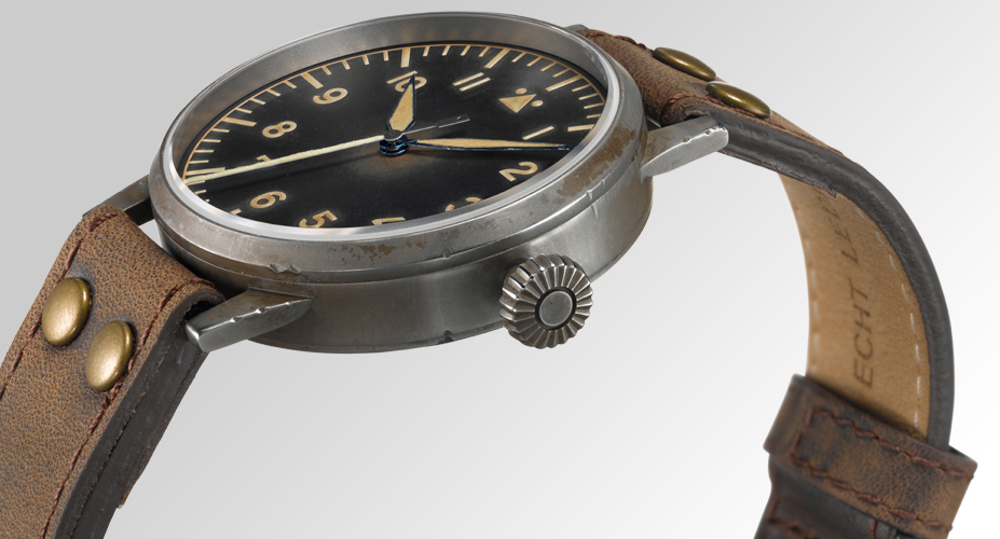 There are currently eight different Erbstück models available, which is really just Laco mixing and matching two dial, case size, and movement options. Four models are in the Pilot Type A collection with “Baumuster A” style dials (more traditional without the center hour ring), and the Pilot Type B with its “Baumuster B” dial. Each of these two dials is available in either a 42mm wide or 45mm wide steel case, as well as with either a base Swiss ETA automatic or hand-wound mechanical movement. To make things even more Germanic, Laco gives each of these models the name of a German region including; Saarbrucken, Westerland, Munster, Memmingen, Paderborn, Leipzig, Friedrichshafen, and Dortmund. These same names apply to the models without the “Erbstück” designation if you like the watches but don’t want the “been through hell” look.

Part of the vintage theme of the watches is the engraving of “FL 23883” on the side of the case. This was a historic German government designation for pilot navigation watches, and is all part of the rather impressive effort that Laco put into making these watches a lot like authentic German military pilot watches you might see in museums. 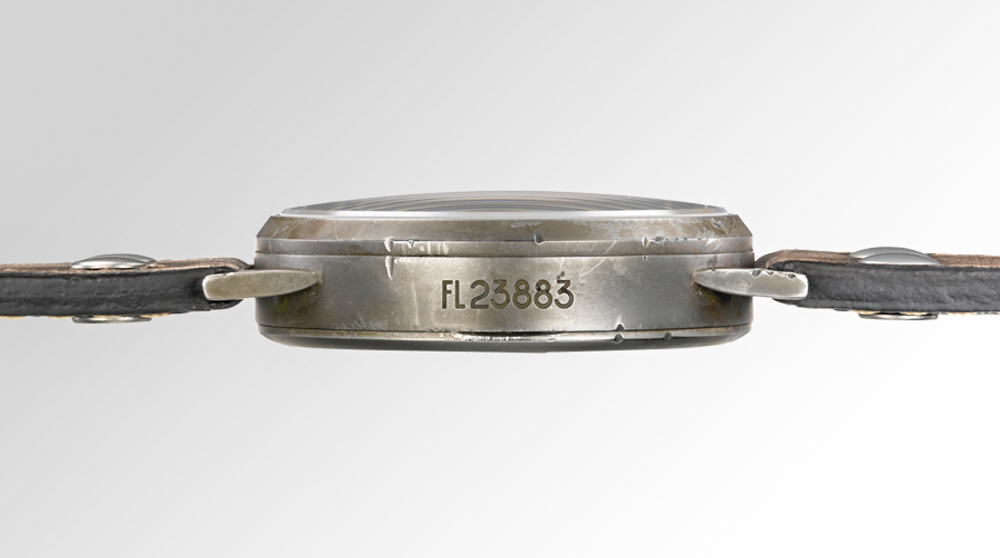 Artificial aging techniques in watches are often considered “dark arts” as they typically belong to nefarious practices in creating or modifying fake/replica vintage watches which are passed-off as the real thing. It is estimated that there are more “fake” vintage military watches on the market as opposed to actual authentic ones. Given the potential prices some collectors are willing to spend on the genuine article, criminals of various types around the world are busy modifying existing, or outright fabricating timepieces which are marketed to unwitting collectors. 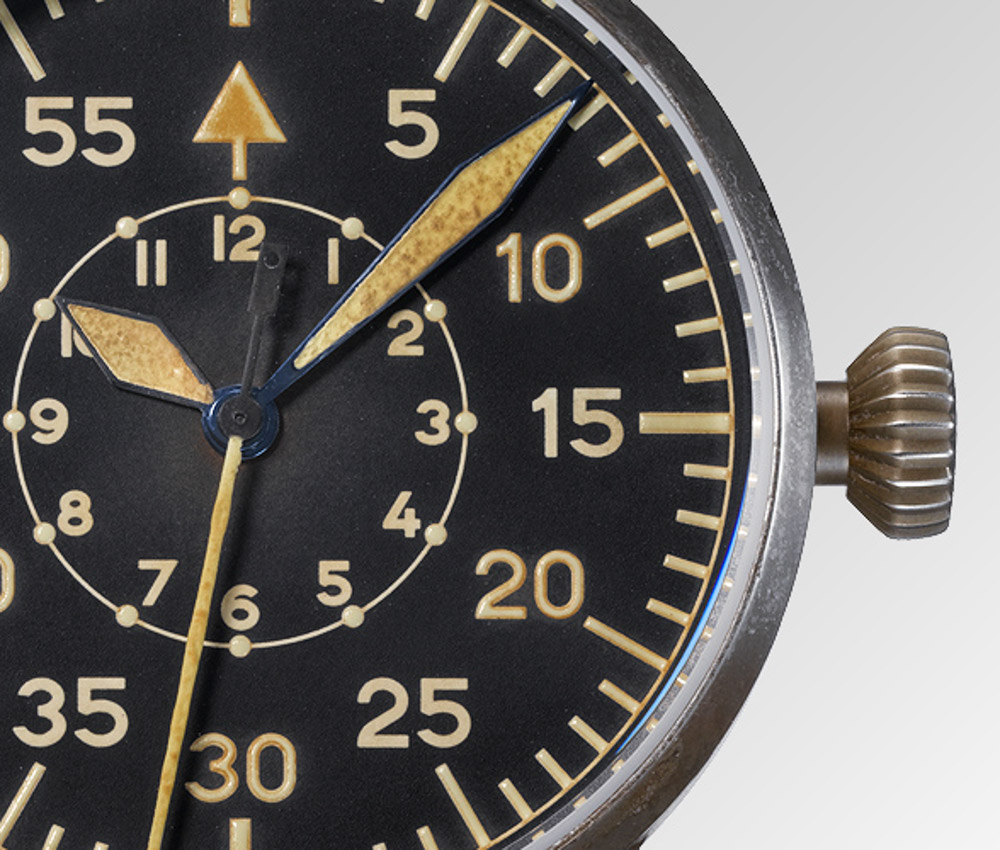 For these Laco Erbstück watches, many of the same techniques are used, only without the deceit. Laco is selling these timepieces with the full transparency that they are created today as replicas of the interesting look people like in actually used, historic military watches. I personally regard these transparent replicas as much more ethical. Not only will you be paying less, but you’ll also know that no one was actually hurt in the creation of the “history” in the timepiece. German military watches especially have a bad rap in that regard. 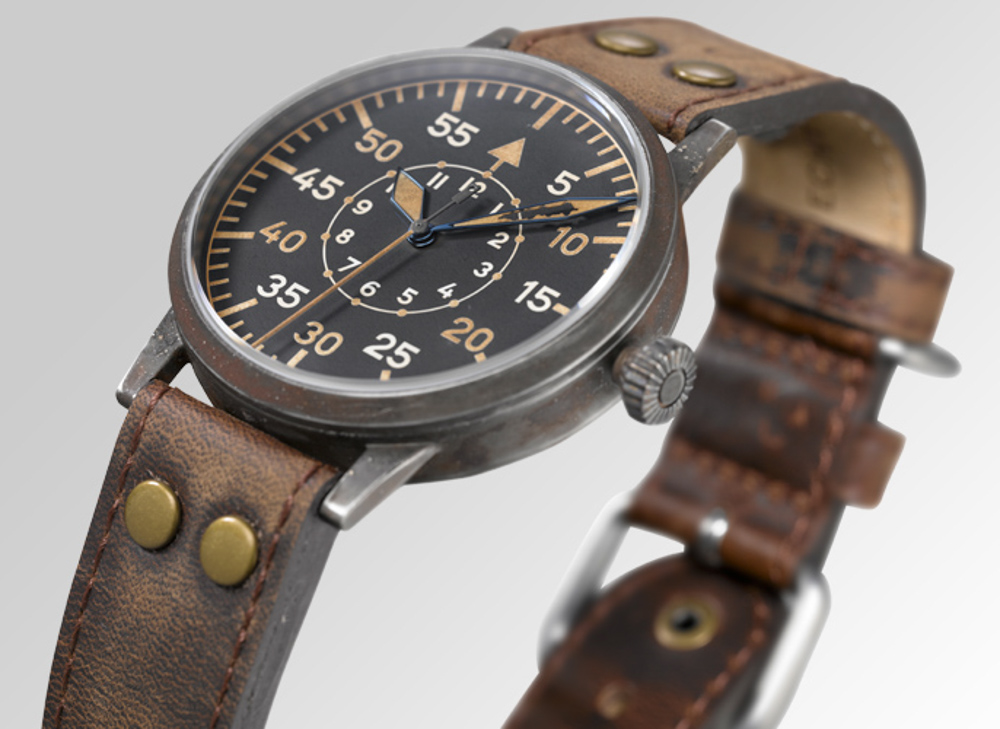 Laco promised that each Flieger Erbstück watch is unique, which is of course true given that the scratches, dents, rust, and overall aging effects will not be the same on each timepiece. Each watch requires many hours of work, and the process is applied (with various different techniques) to the case, strap, hands, and dial. Thankfully the movement inside the watch is new, so you don’t need to worry about a rusted movement inside of your rusted watch. I further believe that the sapphire crystal on each case is free from artificial wear- which is likely a good thing. 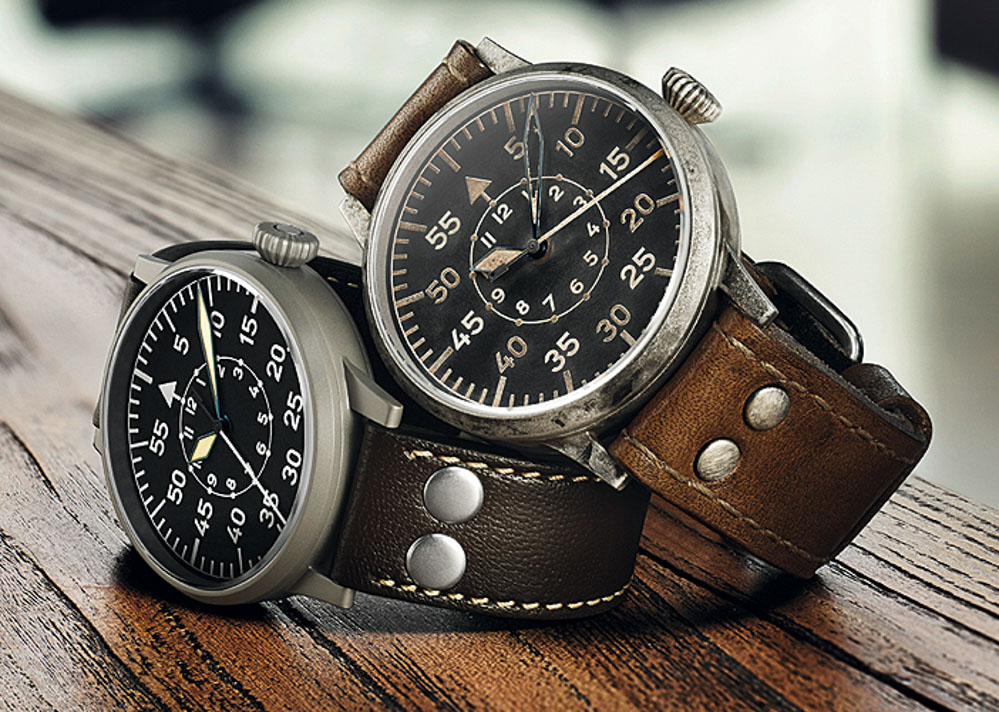 It takes an artist to ensure that each Laco Erbstück falls on the right side of the fence when it comes to that delicate line between “beautiful age patina” and “piece of shit.” The latter is certainly a possibility, especially when it comes to hands with chipped luminant and a beat-up rusted case. No matter how nice these watches are, there are bound to be plenty of people who would not want to be wearing something like this – if only for the fact that all the personality is artificial (but that’s fashion for you, right?). 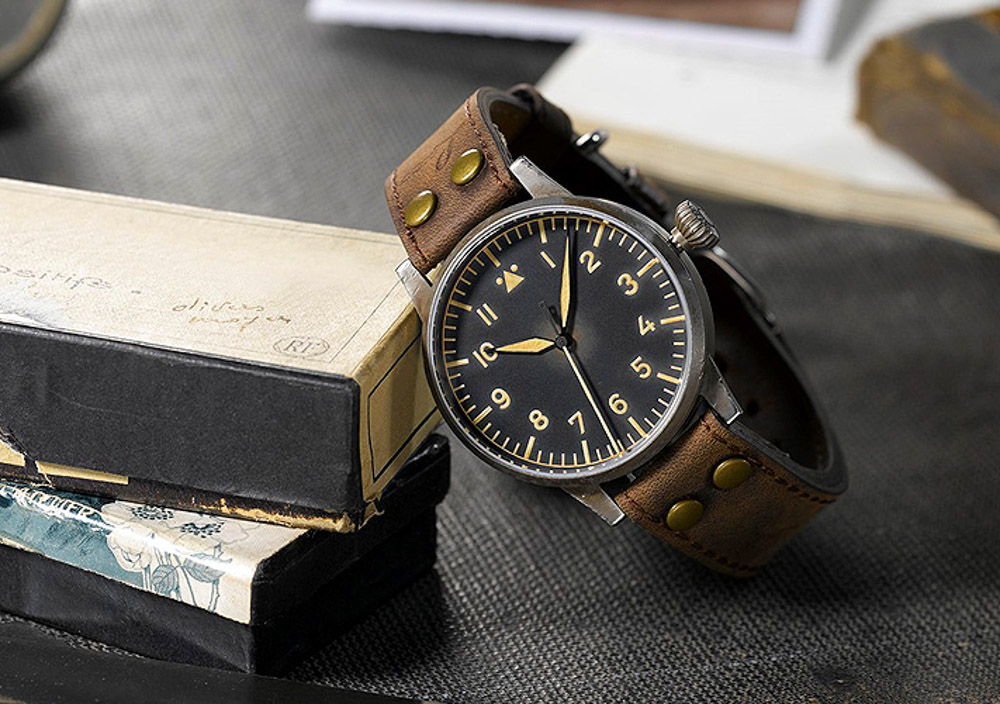 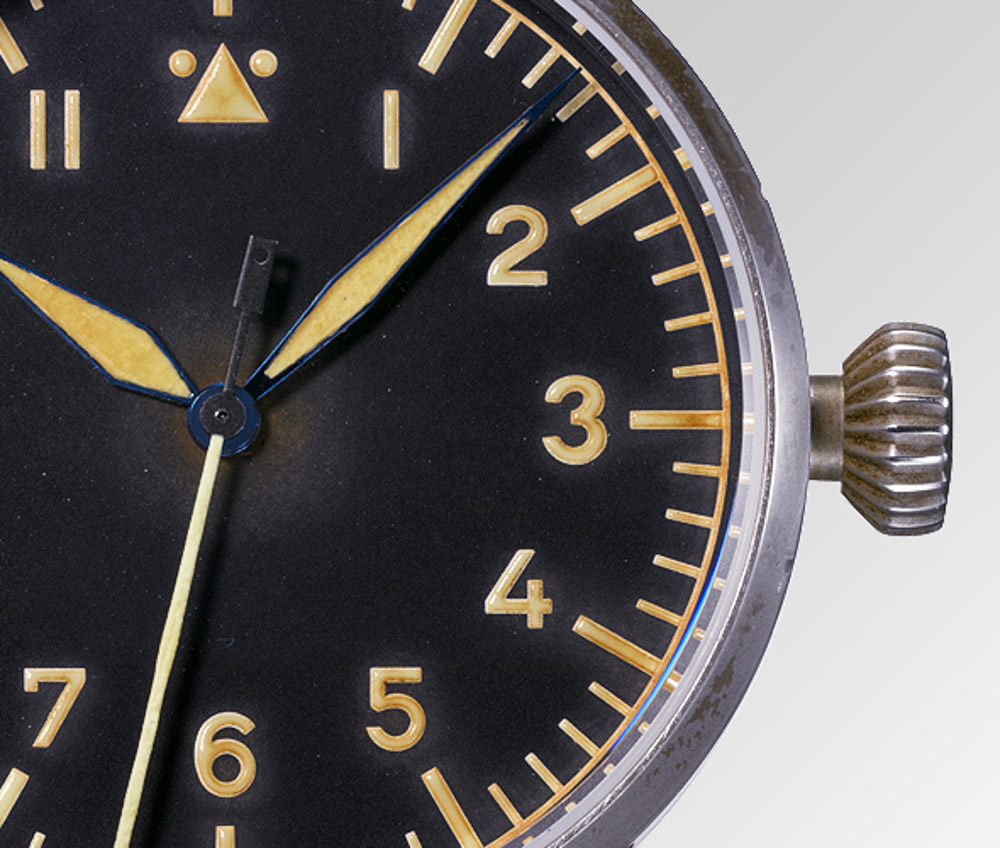 Part of me thinks the entire notion of pre-aged or vintage-replica watches is silly, and another part of me likes the idea of being able to enjoy the charm of an old military watch without having the hassle of actually having to find and care for an authentic vintage military watch. The people who collect these timepieces are both highly motivated, and funded… meaning that collecting such items is both intimidating and complicated for novices. Watches like the Laco Pilot Heirloom models are probably the easiest way to go for most timepiece enthusiasts curious about what it is like to wear something like this. Again, pricing is also quite fair from Laco. When the Swiss do stuff similar to this (see our hands-on with this Zenith Pilot watch here), the prices are much less accessible. Prices for the Laco Flieger Type A and B Erbstück watches including tax from their website range from 1,648 Euros for the 42mm wide watches (same price for automatic or hand-wound movement) to 1,798 Euros for the 45mm wide watches (also same price for both movement or dial options). shop.laco.de