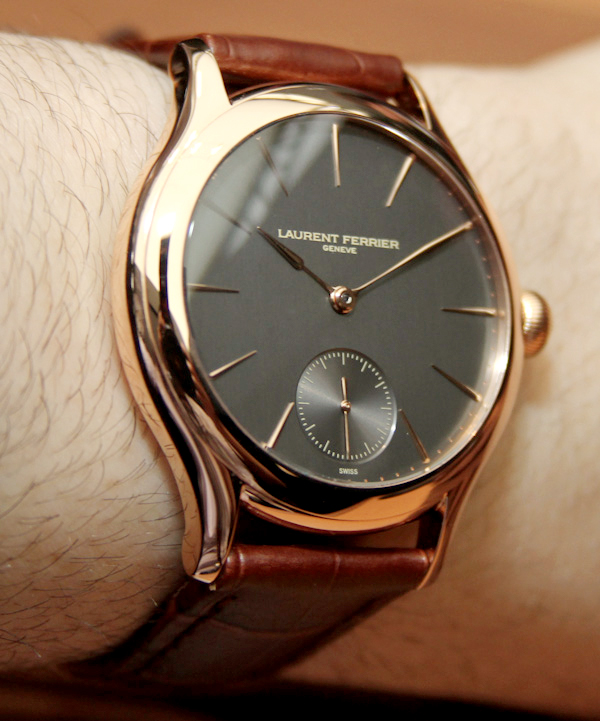 A former Patek Philippe watch maker as I recall, Laurent Ferrier set up shop making his own watches a few years ago under his own name. His first watch was the rather impressive (and award winning) Galet Classic Double Balance Spring Tourbillon. It won him a prize at the GPHG 2010. Following the Tourbillon, he began to develop and eventually produce an automatic, and a while ago I took some hands on images of it. While Laurent Ferrier watches aren’t for everyone, in my opinion they are among the finest “classic” timepieces available with marvelously meticulous designs that don’t compromise and very attractive in-house made movements. If you want a conservative watch from an independent watch maker, something from Laurent Ferrier just might be for you.

Mr. Ferrier is bespectacled older fellow who speaks not a word of English. You can tell that he has a lot to say about his timepieces if he can communicate that to you in French. In fact, it matters little whether or not you know French because he will tell you anyways. “Galet” means pebble actually, and it is a term applied to a range of watches that have been produced over the years. The idea being that the case is smooth and polished like a stone. It is true, and in a quasi-Rolex design, the Galet Classic case at 40mm wide and 10.7mm thick feels perfectly polished both visually and by touch. 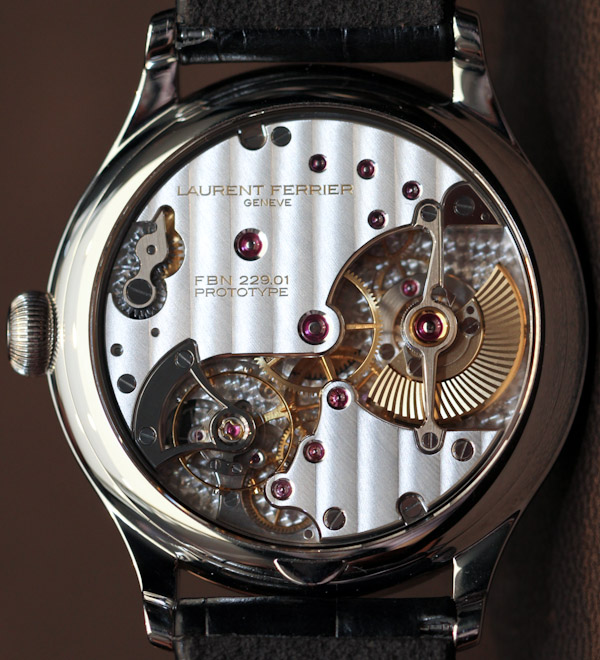 As far as I know, no Laurent Ferrier watches are available in steel. You get gold or platinum choices only. And if that doesn’t fancy you then I believe he has other customers waiting. What first drew my attention to his designs was the watchmaker’s touch. Such as the proper proportions on the dial, the fluid ergonomics, the highly detailed and well decorated movement, and a concept of what watch collectors like.

This automatic version is called the Galet Classic Micro-Rotor. It actually exists as a lower-price alternative to the tourbillon (go figure). While I prefer an automatic movement, I actually prefer the dial of the Double Balance Spring Tourbillon. The Micro-Rotor’s dial is a bit more 1950s-1960s, but you do get Ferrier’s signature long and thin hour markers and hands, as well as subsidiary seconds dial. The movement is called the FBN caliber 229.01. Aside from the solid gold micro-rotor, its most notable feature is the use of a double balance spring. 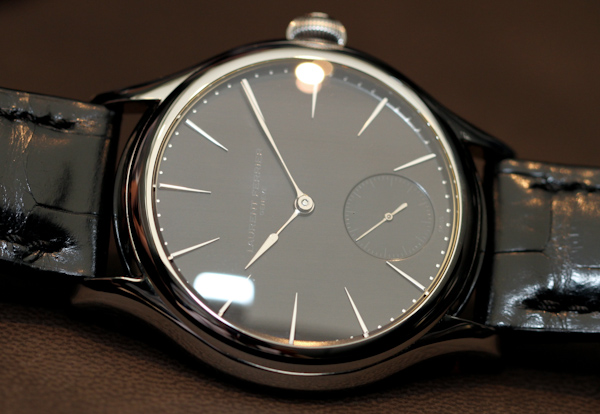 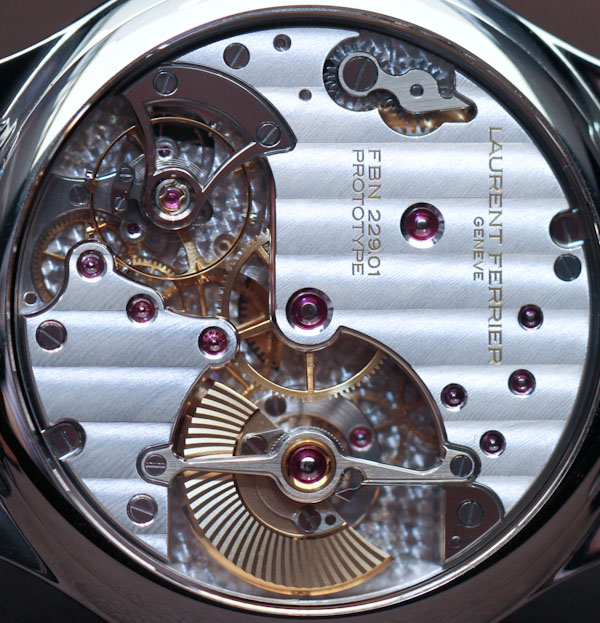 These two balance springs alternate in their beat, and you need to look closely to see them. These are known as double direct impulse balance springs and they use a silicon lever in this movement. The idea is that they are meant to cancel out each other’s errors to produce a more consistent timing in the movement. The rate of the movement is 21,600 vph, and it has a power reserve of three days. Decoratively, the Micro-Rotor’s movement is gorgeous. Lots of fantastic polished, beveled edges, and an attention to detail you find only in top-grade movements.

There is also a beautiful depth to the movement. Rather than try to be ultra-thin, the 229.01 is 4.35mm thick (actually not that thick), but it makes room for you to look inside of the movement and admire all of the parts. While not the world’s most complex movement, it is hand finished, limited in production, and very beautiful. Together it feels quite satisfying indeed. Oh, and the movements are COSC certified chronometers. 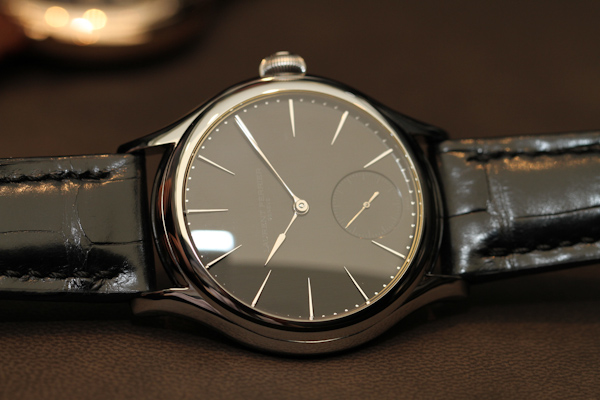 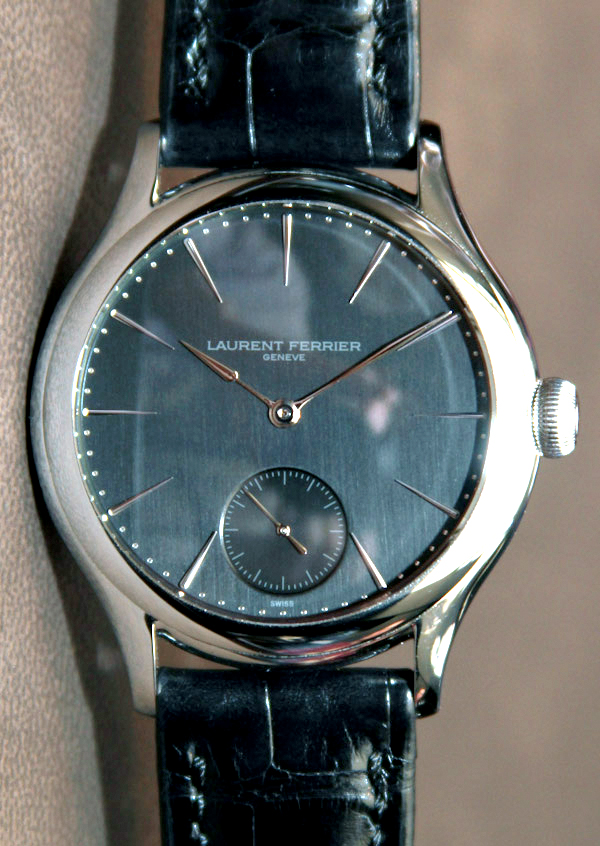 Laurent Ferrier offers a few dial variations of the Galet Classic Micro-Rotor from a brush slate dial to one in a silver tone. Again, while they are quite attractive, I find them less engaging than the very beautiful enamel dials of the tourbillon. Which actually is a rare timepiece with Roman numerals that I like. Still, the dials on the Micro-Rotor should satisfy most. I bet they would customize one for you as well if you asked.

Attached to the Laurent Ferrier watch is a handsome thick reptile strap. The timepiece is dripping with a classy sense of old world perfection. It is more designer than any Patek Philippe, yet so much more restrained than most designer watches. Nevertheless, given the price, movement design, and provenance, you’ll need to be a seasoned timepiece aficionado to completely appreciate the watch. Price is 49,000 Swiss Francs.