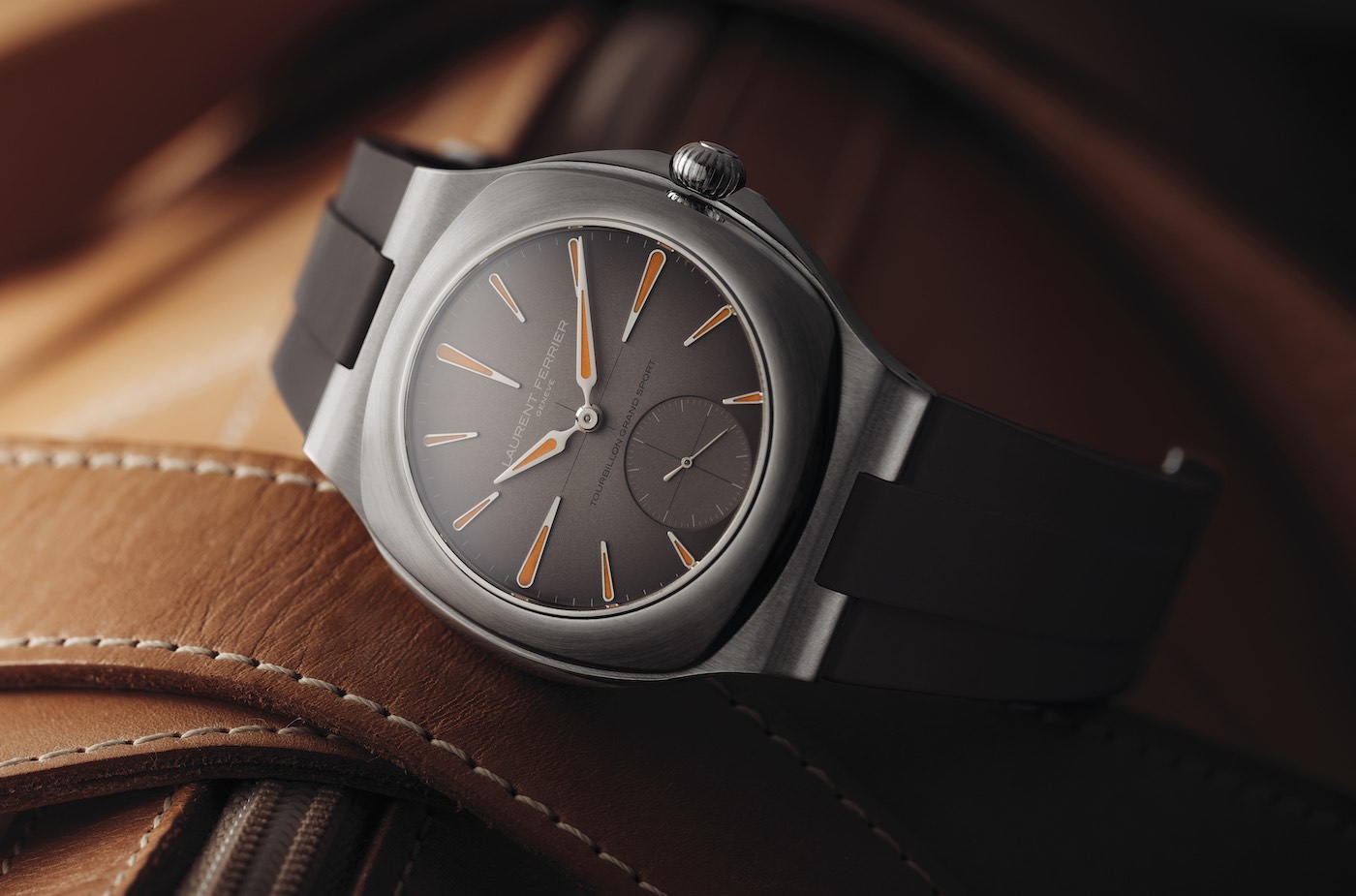 The Laurent Ferrier Tourbillon Grand Sport watch is the latest, somewhat surprising release from one of the world’s masters. Laurent Ferrier’s watches are renowned for the quality of their finishing, and this tourbillon is no exception. What is instantly most arresting to me, however, is the very interesting color scheme chosen for the dial and hands. Ferrier’s previous works have been mechanically ambitious but less often chromatically challenging. I am, in this assessment, excluding the full-color artistry of the Galet Secret Tourbillon Double Hairspring collection, because those are unique pieces lovingly created according to each client’s wishes. With this, the very first entrant in a totally new collection, Laurent Ferrier stays true to his core principles. 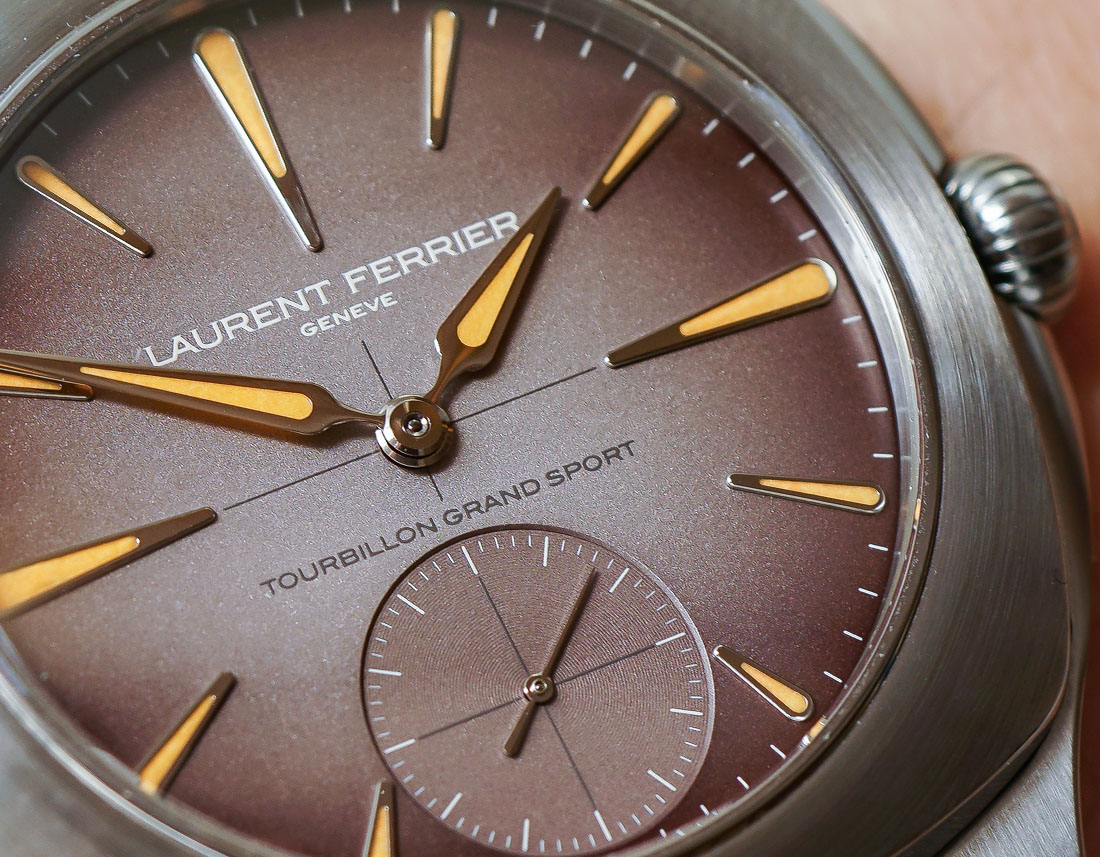 There is, in fact, a quote on Ferrier’s homepage from the man himself that explains his aims: “I nurtured a dream that represented my horological values: simplicity, precision, and pure, uncluttered beauty.” And it must be said, he seems to realize his goals with every release. Explaining the value of a Laurent Ferrier watch to someone who hasn’t had a chance to study one up close is a little like trying to explain what a fine wine tastes like. You can use all the agreed upon terms, but the total experience is hard to synthesize. The quality is genuinely stunning, and the new Laurent Ferrier Tourbillon Grand Sport is no exception. But what is the background of the man behind these delightful pieces? To understand the level of craftsmanship at play here, it is worth delving into Laurent Ferrier’s early years. 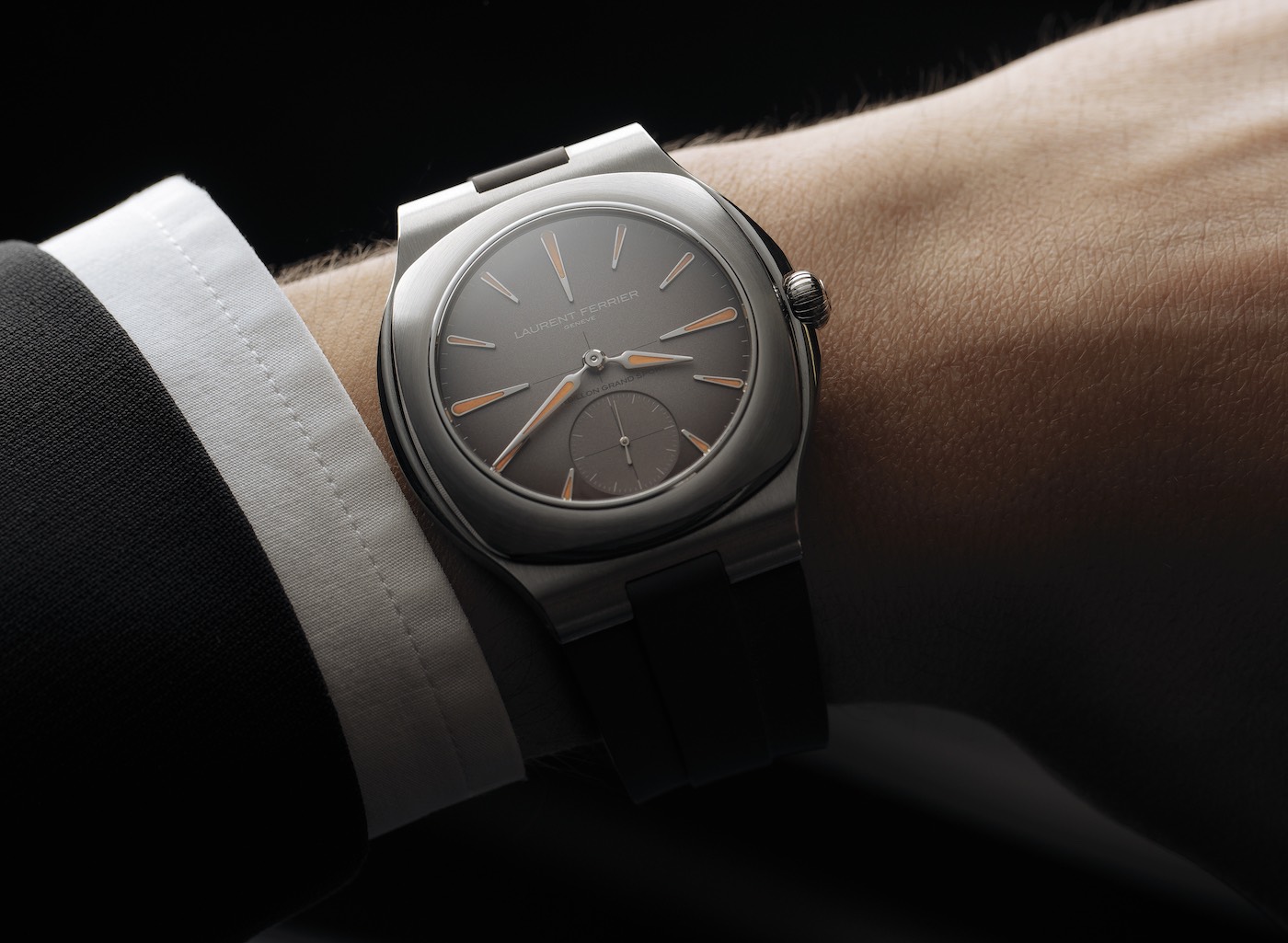 The Man Behind the Movement

Ferrier was born into a watchmaking family. That is not to say he was born with a love of watchmaking — no, that would come later. His surroundings, though, could not help but influence and inspire the young man, as he spent his formative years in Geneva, living in an apartment above his father’s workshop, which stood across the street from the Vacheron Constantin factory. Every day, as he passed his father’s bench, he would have been able to see the many mechanical marvels upon which his father worked. 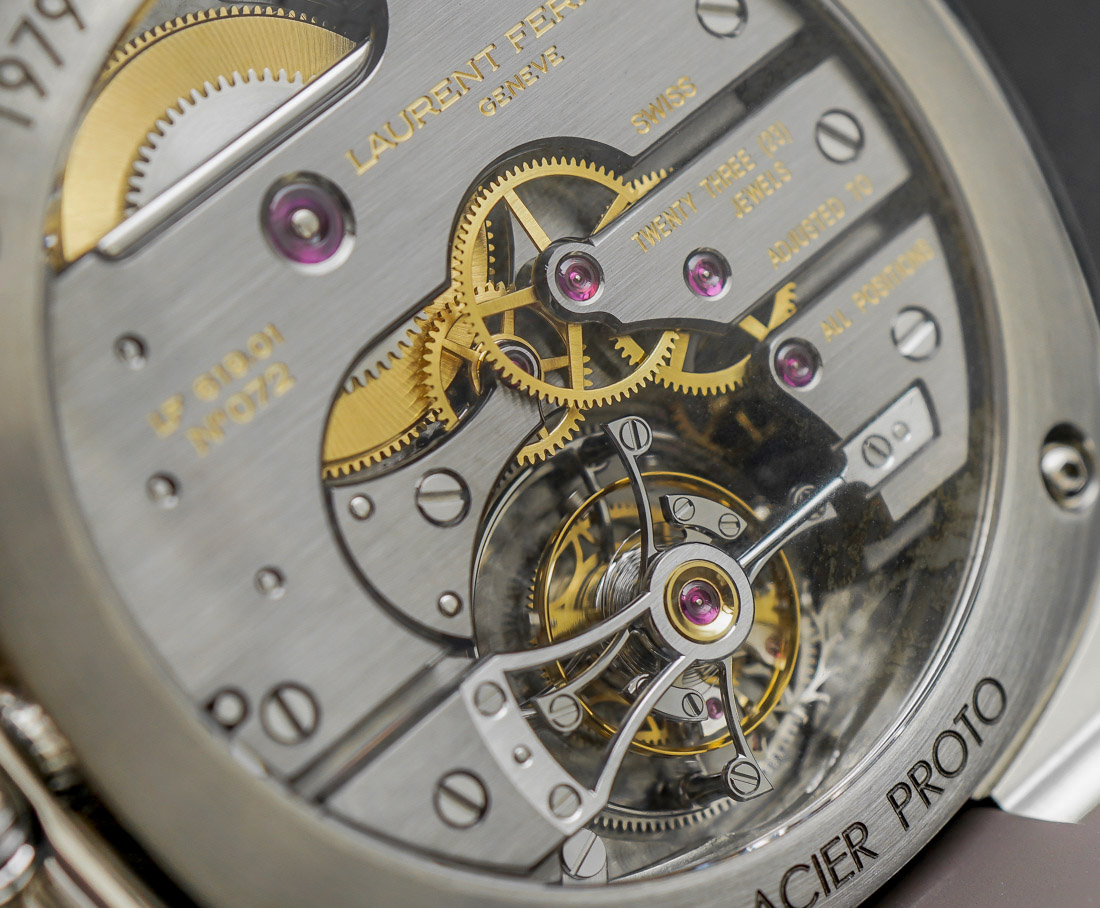 In addition to his paternal ties to the craft, both his grandfathers had been watchmakers. But it was not enough to sire a deep love for watchmaking in a heart that had already been stolen by motor racing. Ferrier’s love of cars would drive him to that industry, but not before graduating (and excelling) at the Geneva Watchmaking School. From there, he took a position in the movement prototype department of Patek Philippe. Still, however, his early steps in the world of watchmaking were motivated by the family tradition more than any personal attachment to the discipline. And when an opportunity to leave horology for the automotive industry emerged, he took it. 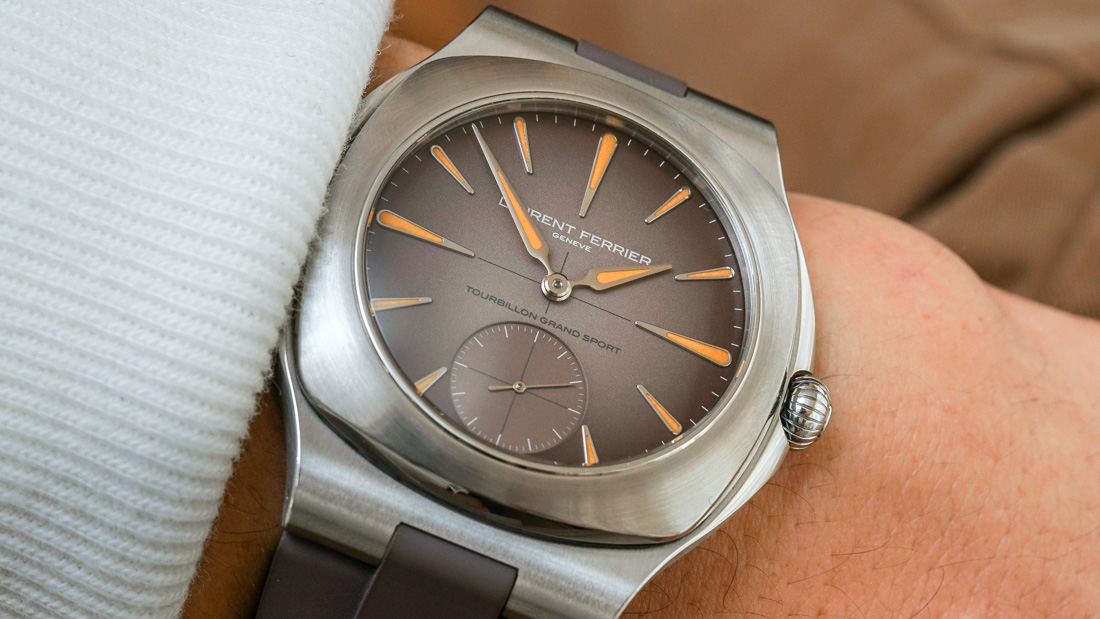 He stayed away for three years before Patek Philippe lured him back to head up his own department, concerned with sourcing the best manufacturers for the more aesthetic components, such as hands, dials, and cases. And while this job was of interest to him, his first love remained the race track. 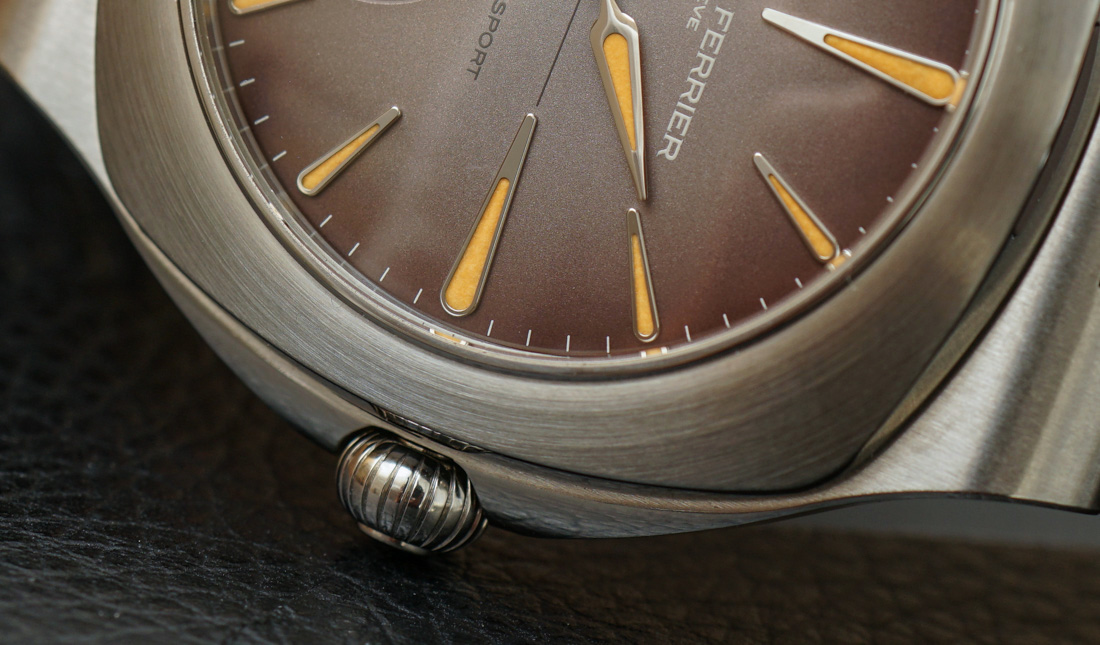 In his free time, he continued to race cars. Although still an amateur in that field, he competed in the Le Mans 24 race on seven occasions during the ’70s and ’80s. It was in 1979 that he first met (and raced with) Francois Servanin, who would become a lifelong friend, and business partner. This watch, the Laurent Ferrier Tourbillon Grand Sport, celebrates the 40th anniversary of their meeting. Thirty years after that fateful Le Mans 24 (during which they drove together, finishing third against many professional F1 drivers), the two gentlemen founded the Laurent Ferrier watch brand in 2009. 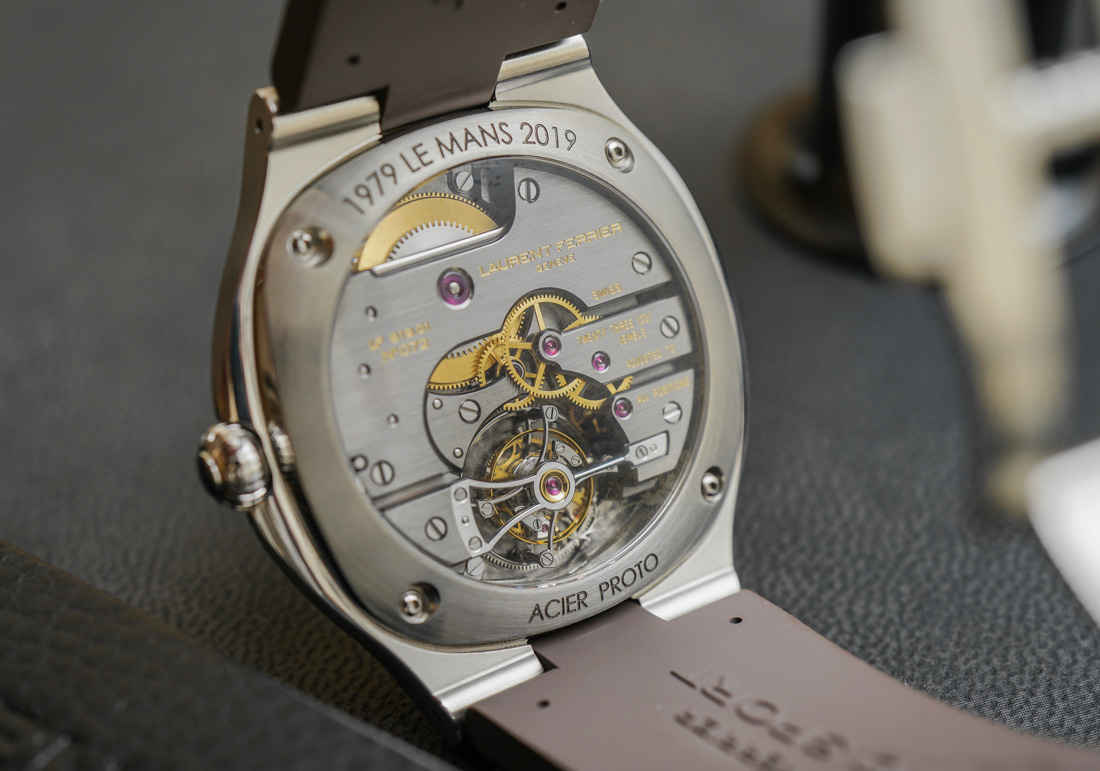 This is, in my opinion, the sportiest and most youthful watch currently in the Laurent Ferrier collection, and if there are to be subsequent iterations of this family, I am truly excited. The 44mm stainless steel case has a brushed finish, which darkens the watch’s overall palette. Furthering this broodiness is a slightly tinted sapphire crystal. The case is comprised of three main parts and held together by sporty caseback bolts. Fittingly, the watch, despite its elegance, is water resistant to 100 meters. 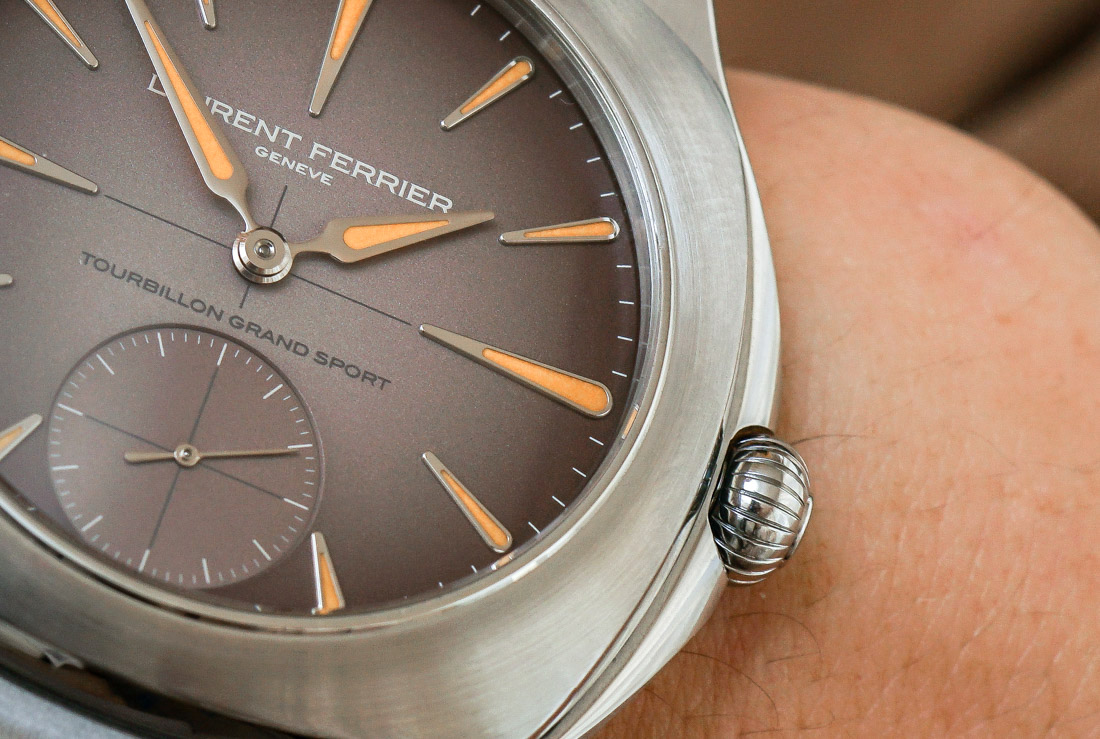 Having left the automotive industry behind (at least professionally), Ferrier went on to establish himself as part of the furniture at Patek Philippe, serving there for three decades until the time was right for him to branch out with Servanin and found his own marque. It is unsurprising, therefore, to note the obvious similarities between this case shape and the Gerald Genta designed Patek Philippe Nautilus, with which Ferrier had much professional involvement (and a clear amount of respect). 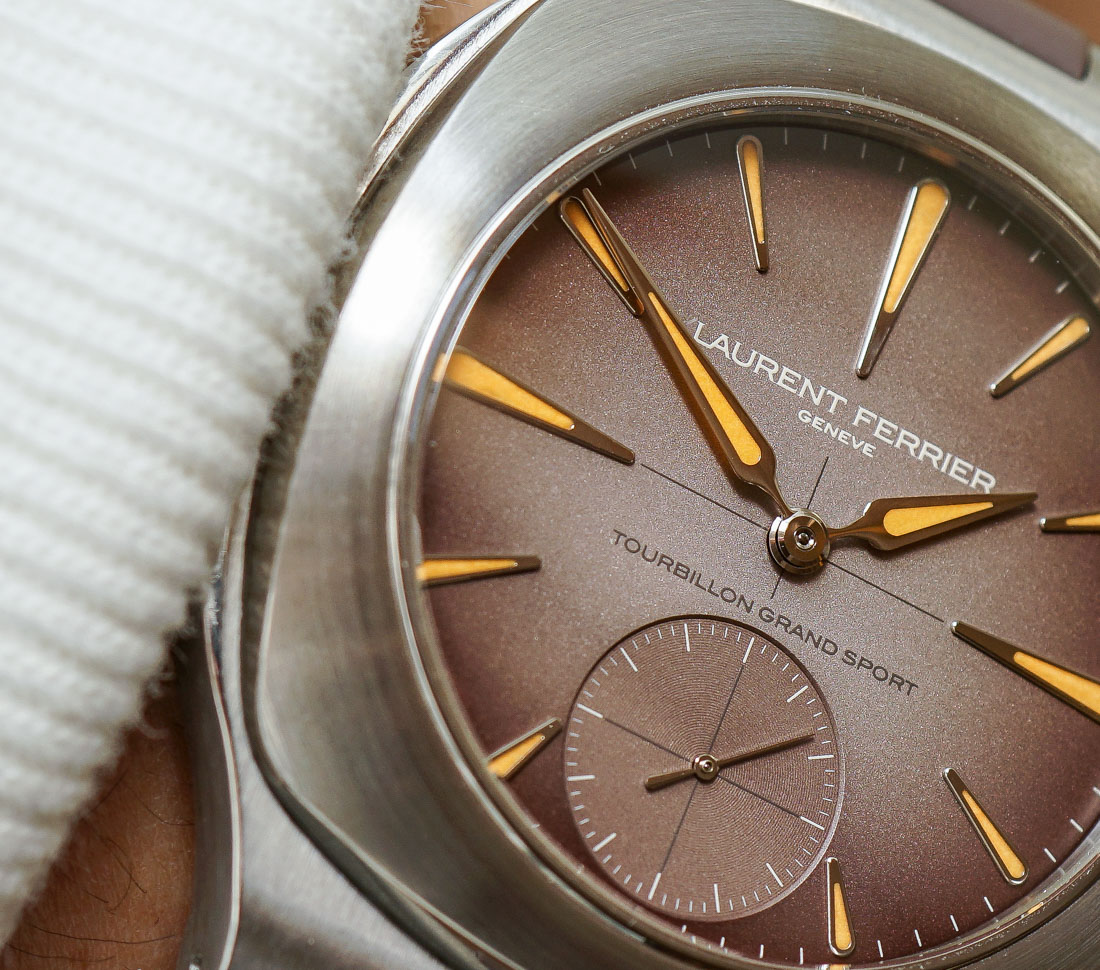 The transference of such design DNA is important in understanding the context of this relatively new brand. In the same way that coaching trees in sports show clear similarities in the strategic philosophy of trainers that have served under the greats, so too can we see characteristics of design (even if only in principle on occasion) pop up in these new works. Genius designers whose work goes on to change the industry are rarely fully appreciated in their lifetime, but by identifying the links between the master and the pupils, we have a better chance of highlighting those who will, in the future, be elevated to the same status as those who went before. As the Laurent Ferrier brand moves into its second decade, I feel that the forebears’ principles are starting to merge harmoniously with his own. 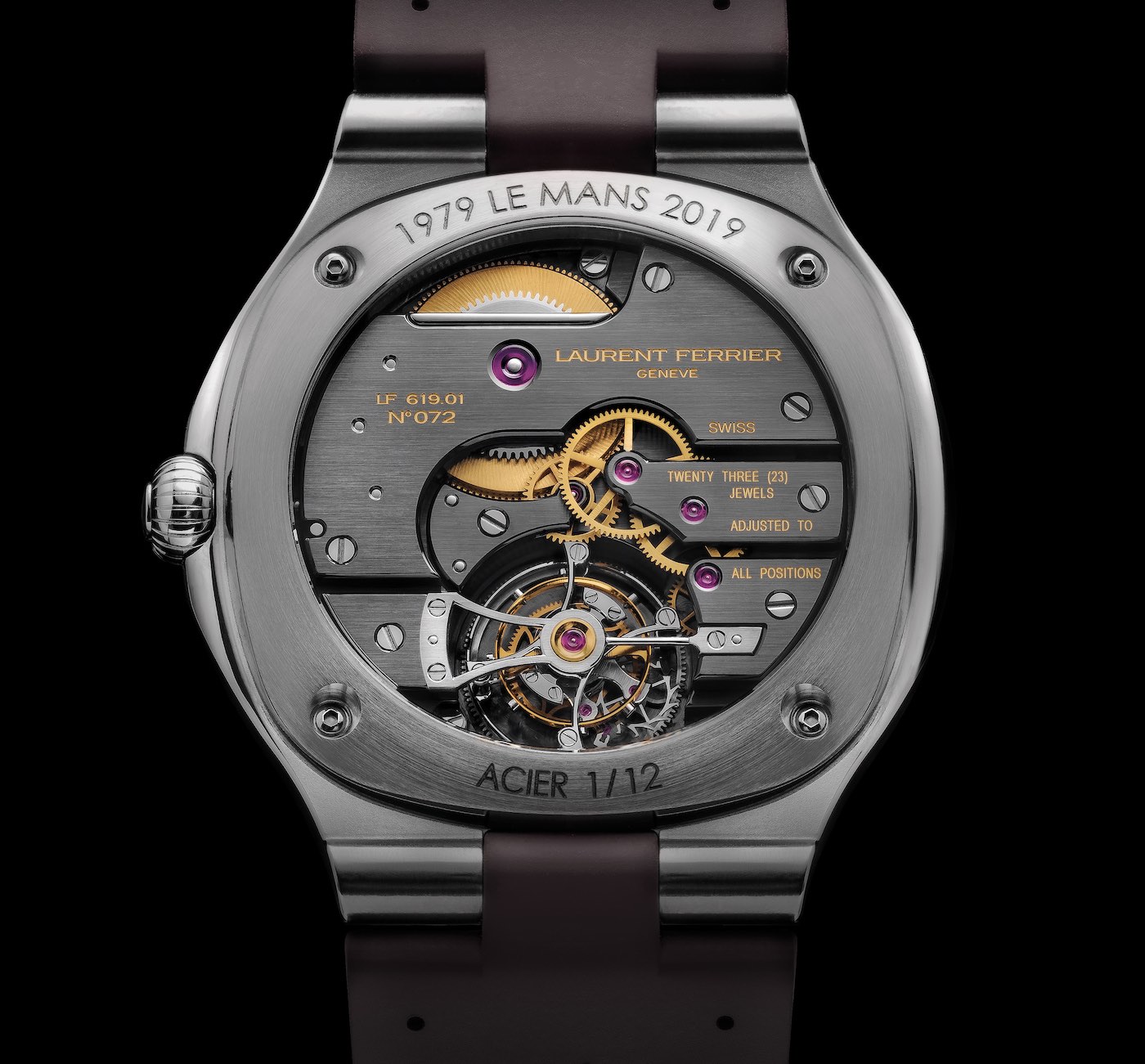 Through the sapphire case back you can see that this movement is very similar in construction to the existing LF 619.01 featured in the Galet Classic Square. It features manual winding, a power reserve of 80 hours, and an operating speed of 21,600vph (3Hz). It is comprised of 188 mechanical parts, of which 23 are jewels, and held together by polished screws in horizontally satiated bridges coated with ruthenium. The movement measures 5.57mm-thick and 31.6mm-wide. From these tech specs, it would seem the major difference is the type of plating used on the bridges, and the horizontal finishing, as opposed to the more traditional vertically applied Geneva striping. 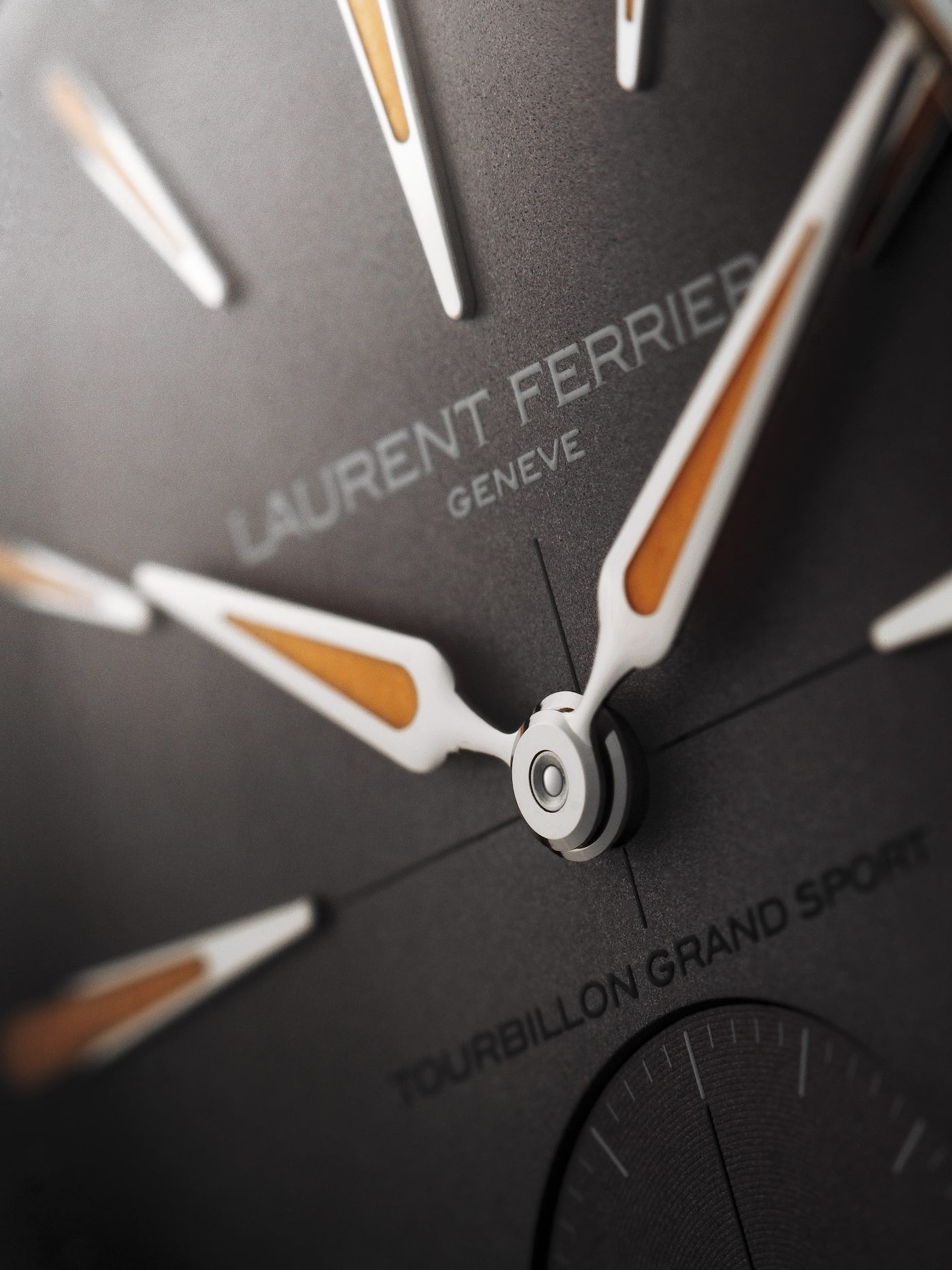 The dial-side functions of this watch are simple, with just the hours and the minutes in the center and the small seconds hand running at 6 o’clock in its own sub-dial. The seconds hand is, of course, mounted on the tourbillon cage pivot, which pokes through the dial from its home behind the face. I have always been a huge fan of tourbillons that are not revealed on the dial, as I take a great deal of pleasure in knowing the effort that has gone into the watch without it being meretriciously plastered all over my wrist for all to see. 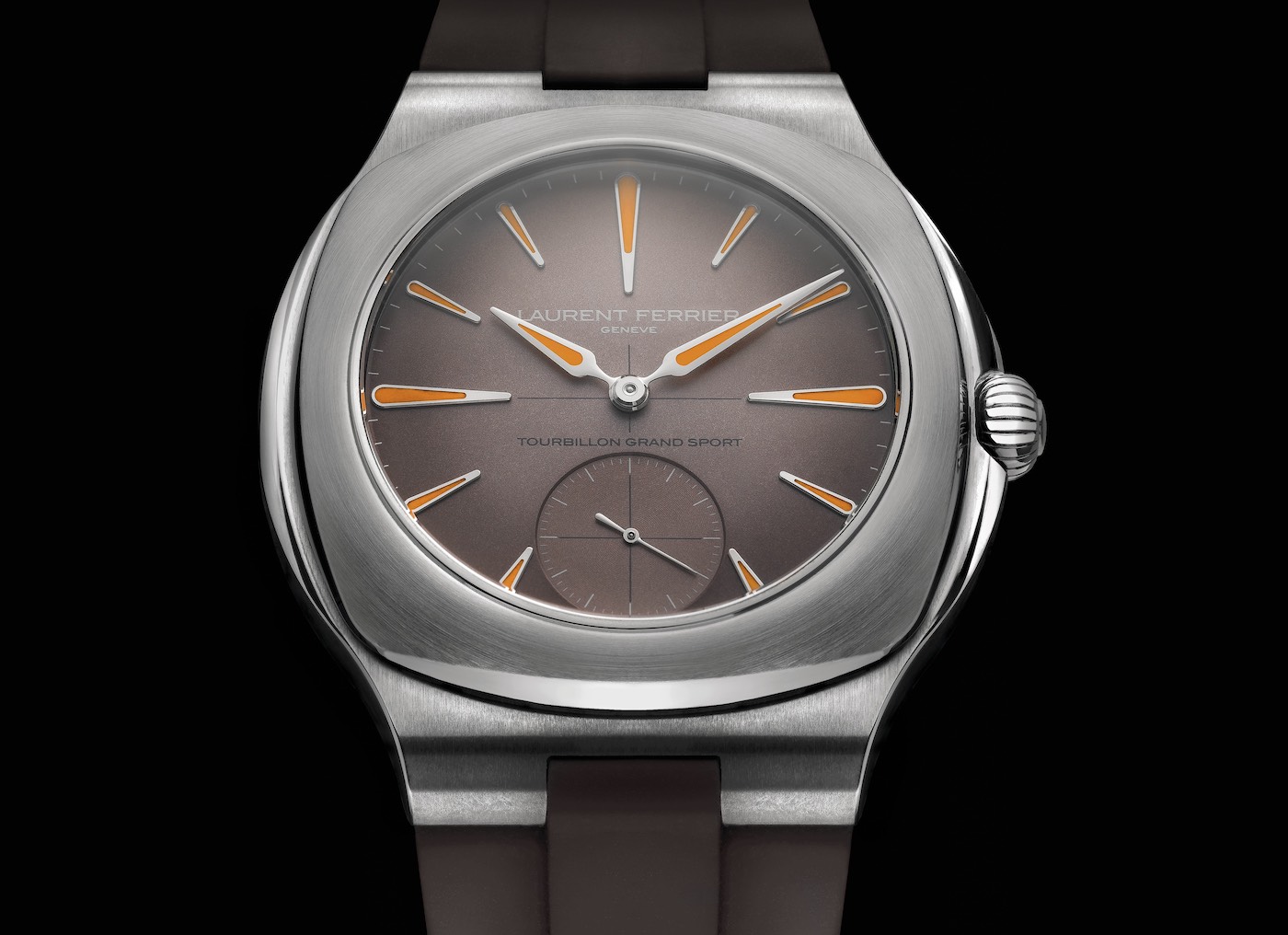 What’s immediately more arresting about this watch, however, is the unusual colorway of the dial. The choice of “smoked taupe” for the dial and orange luminescent hands is perhaps inspired by more than just a desire for novelty. It evokes the 1970s, the era in which Ferrier and Servanin met — a shared era of risk and reward that no doubt still binds the two men who raced at a high level, side by side. 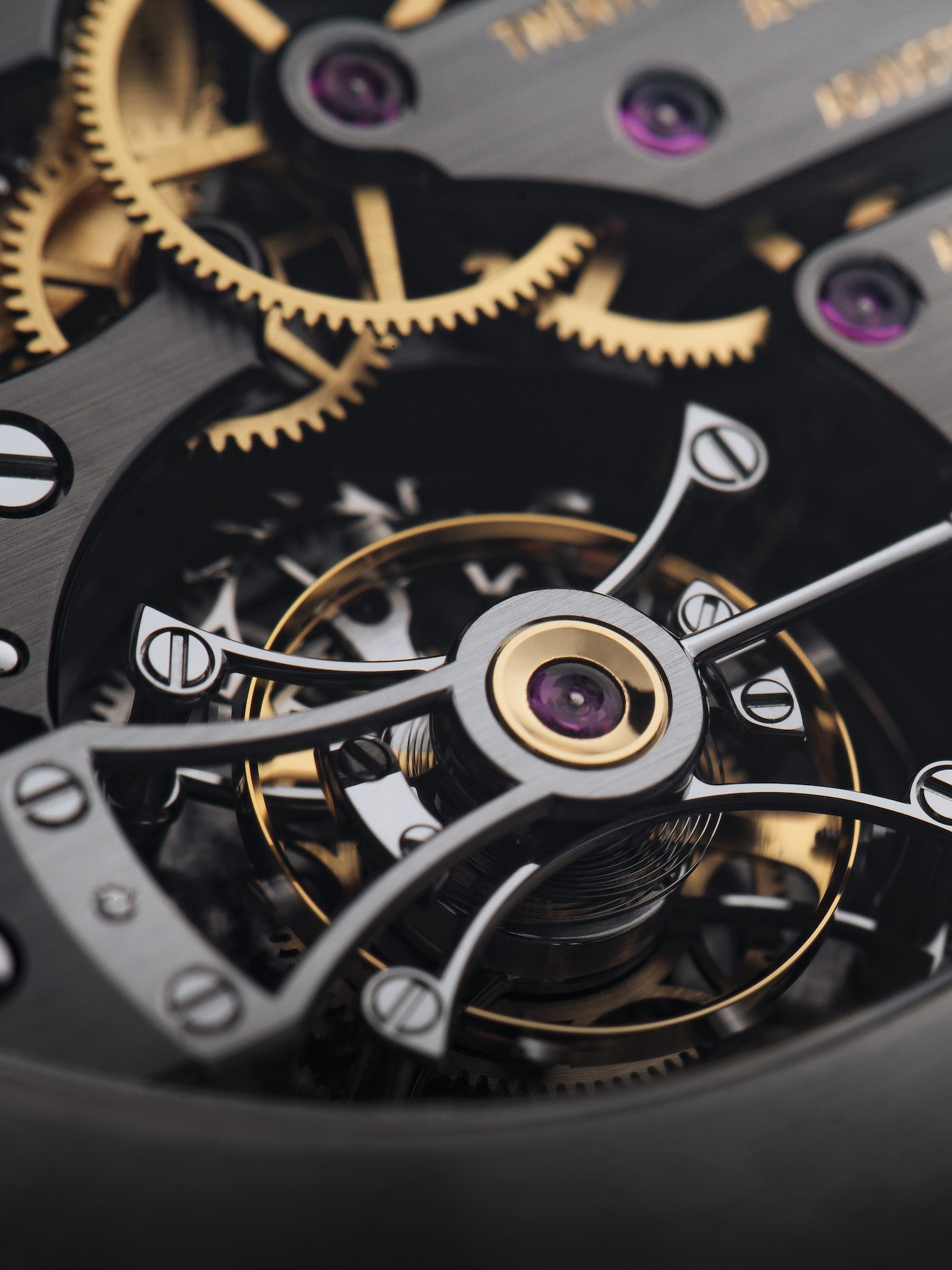 This release is not only a 40-year anniversary of friendship but also a 10-year anniversary of the brand and the release of its first tourbillon. On the subject of tourbillons, it is worth speculating as to why this piece — the very first in what one might assume will become a new family of sports watches for the Laurent Ferrier brand — was launched as a tourbillon and not a three-hander. We can but speculate, of course, but it seems likely a more accessible follow-up will arrive sooner or later, as the design itself is so appealing and wearable it would be a shame to price a collection of this versatility out of reach for most. For now, though, only those of us with the deepest pockets will be able to enjoy the Laurent Ferrier Tourbillon Grand Sport watch. This beautiful addition to the range will be limited to just 12 pieces. The retail price is $185,000 and the watch will be available this coming June. Learn more at laurentferrier.ch.