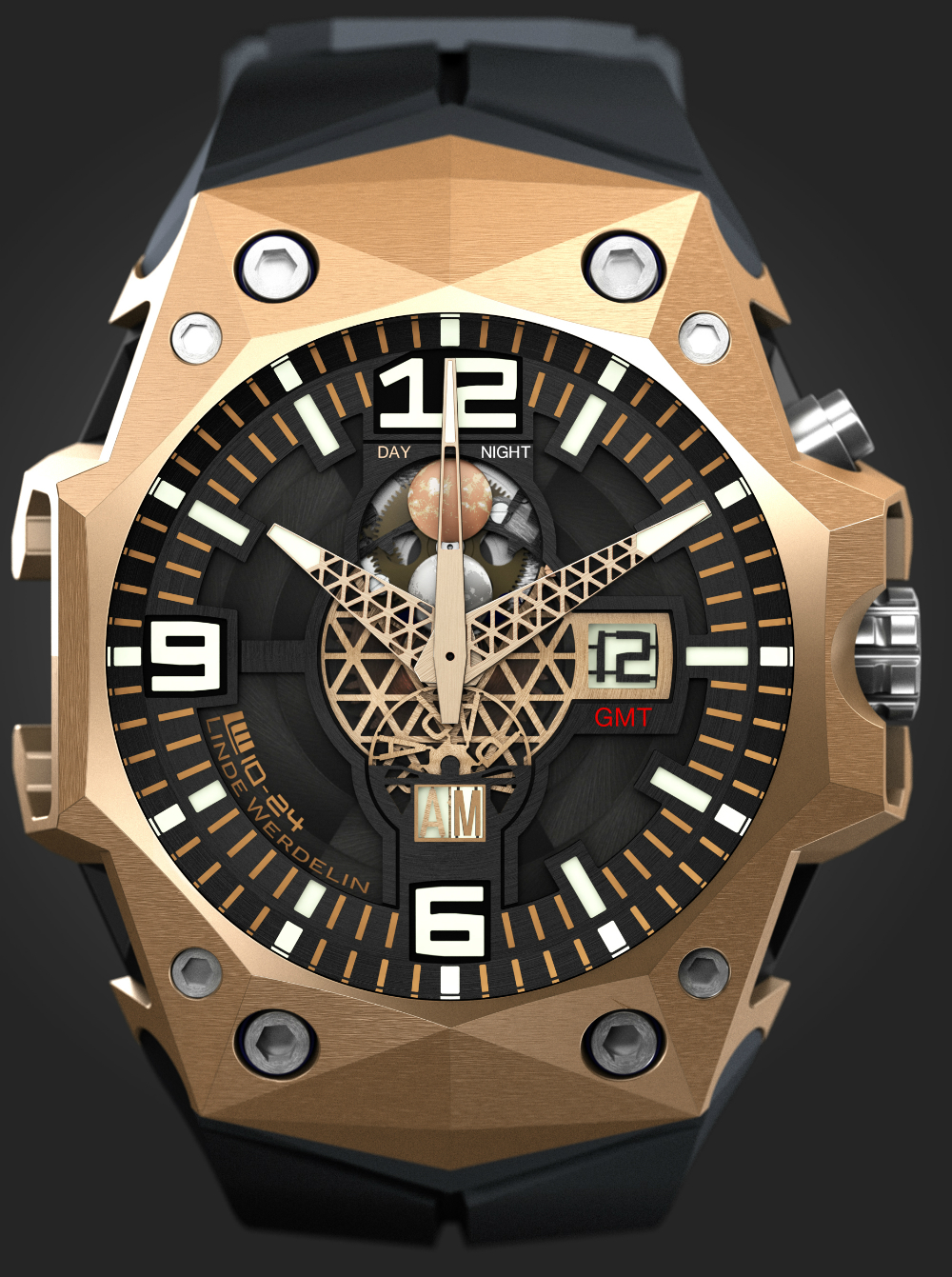 In honor of the tenth anniversary of their first release, the Founders watch, Linde Werdelin are releasing their third-generation line with the LW 10-24 GMT watch. Linde Werdelin are building upon their tradition of crafting timepieces that fit a specific aesthetic with a GMT watch that serves to offer a watch-plus-instrument that can become a traveller’s best companion. If a GMT watch that stands out from the crowd is what you’re looking for, this will make the short list for buyers who are a fan of Linde Werdelin’s unique style.

The Linde Werdelin LW 10-24 GMT watch is being offered in two variations, each with an eye-catching quality of their own. Whichever you choose, you will no doubt be amazed at the level of detail and devotion that has gone into these pieces. The company’s history may span only a decade, but there have been plenty of advancements during that time that make them worthy of note. Let us take a moment to see what led to the Linde Werdelin LW 10-24 GMT and why you might want to take a closer look. 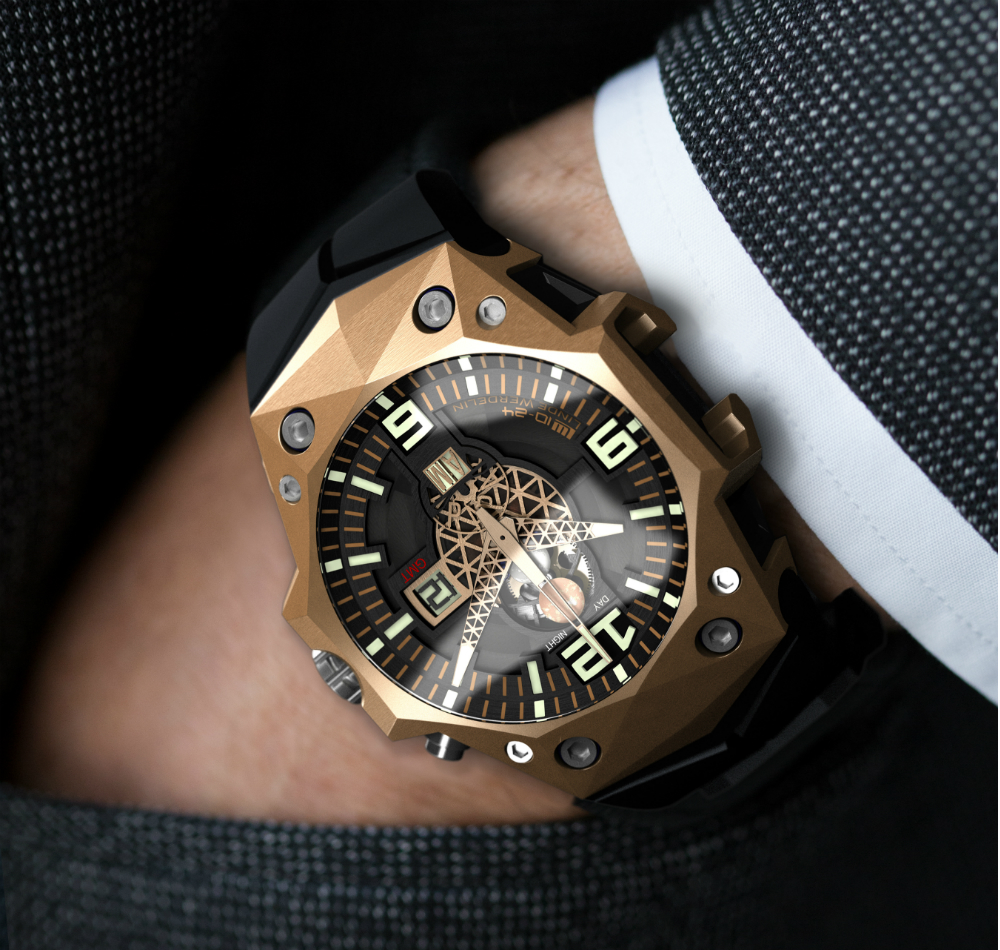 Before I go any further, I should mention that this line is the introduction of the “third generation” Linde Werdelin watches. Just like the Founders watch in 2006, the Linde Werdelin LW 10-24 GMT is available for purchase via invitation only, presumably to allow loyal LW buyers the chance at first dibs on the watches, even if it’s just to be able to pick the serial number as there’s a limited edition run of 96 watches per model.

The first generation Founders watch was, at its heart, a GMT watch with the intention of being a solid time-zone jumper. They then followed it up with the GMT Biformeter and the 3-Timer, with the 3-Timer taking the idea of a GMT watch to the next level by adding a complication for a third time zone. Linde Werdelin considers this 2006-2009 era their “First Generation” and the functionality of these early pieces finds its way into the new line. The “Second Generation” saw the release of the Spido and Oktopus pieces, with a focus on skiing and diving utility, both passions of the company’s founders. 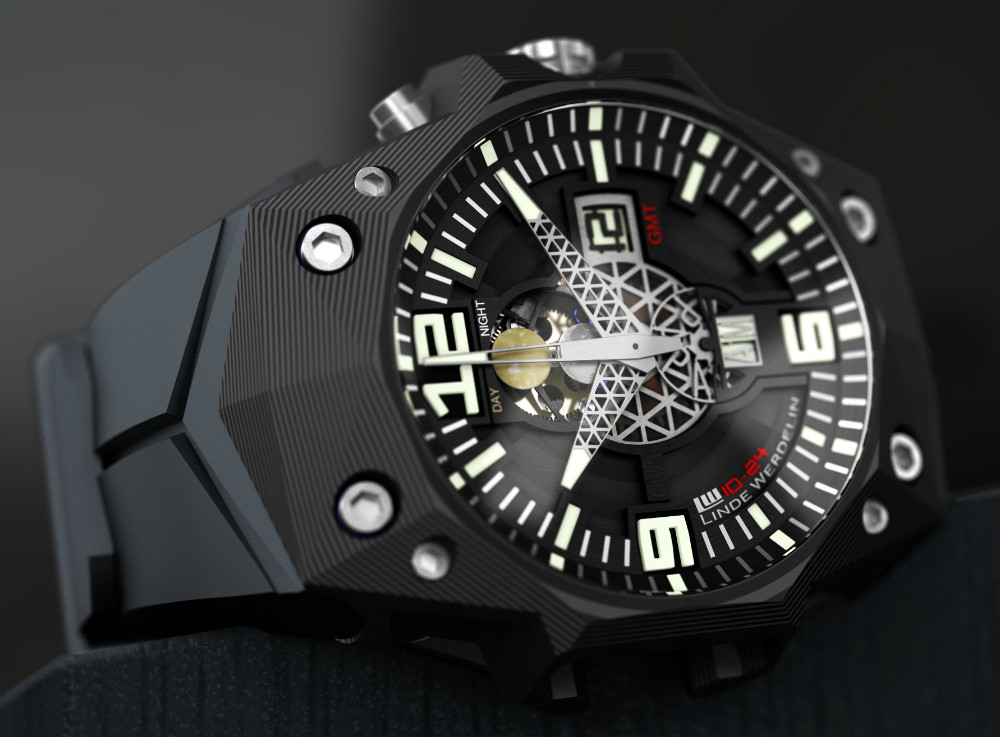 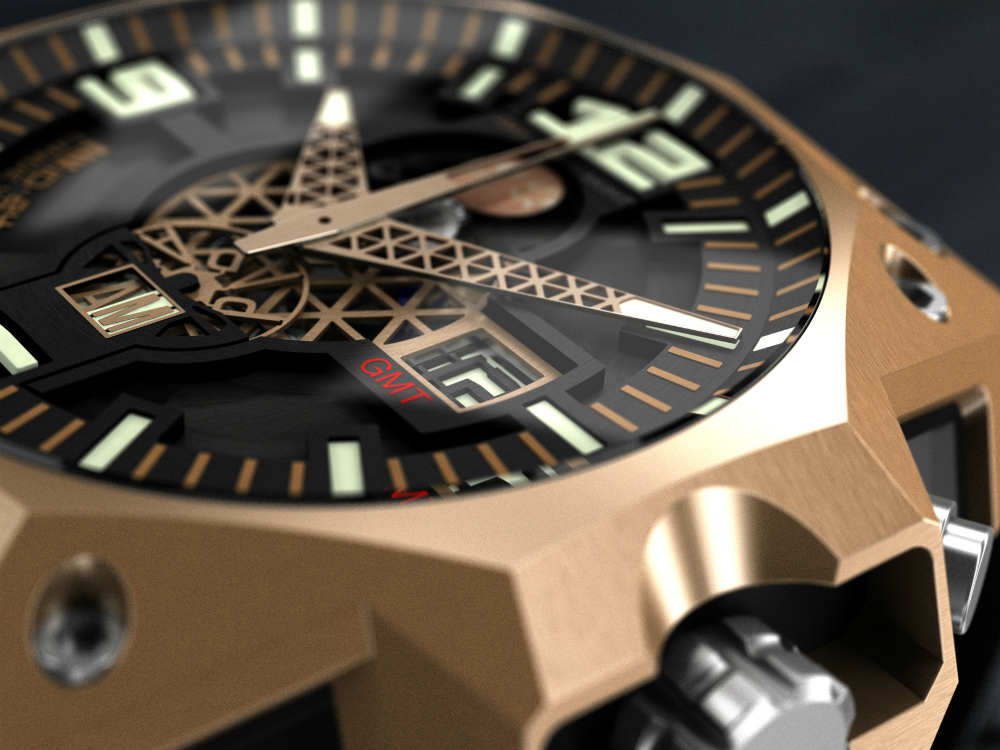 So where does the Linde Werdelin LW 10-24 GMT fit into the line as the “Third Generation?” Maintaining its position as a GMT watch, it maintains that functionality with some interesting changes. First, the case is redesigned to increase legibility and features a nicely recessed bezel that seamlessly blends into the case to allow more of the 36mm dial opening to be seen. In terms of size, the 44mm wide, 46mm long, and 15mm thick case is right in line with previous models. The hands are skeletonized with what Linde Werdelin calls the “Trigon” pattern, and the lume used on the dial hails from the same formula used on the Oktopus Frogman which actually has roots in watches used in Danish military diving units. Speaking of diving, the watches are water resistant to 100m each. 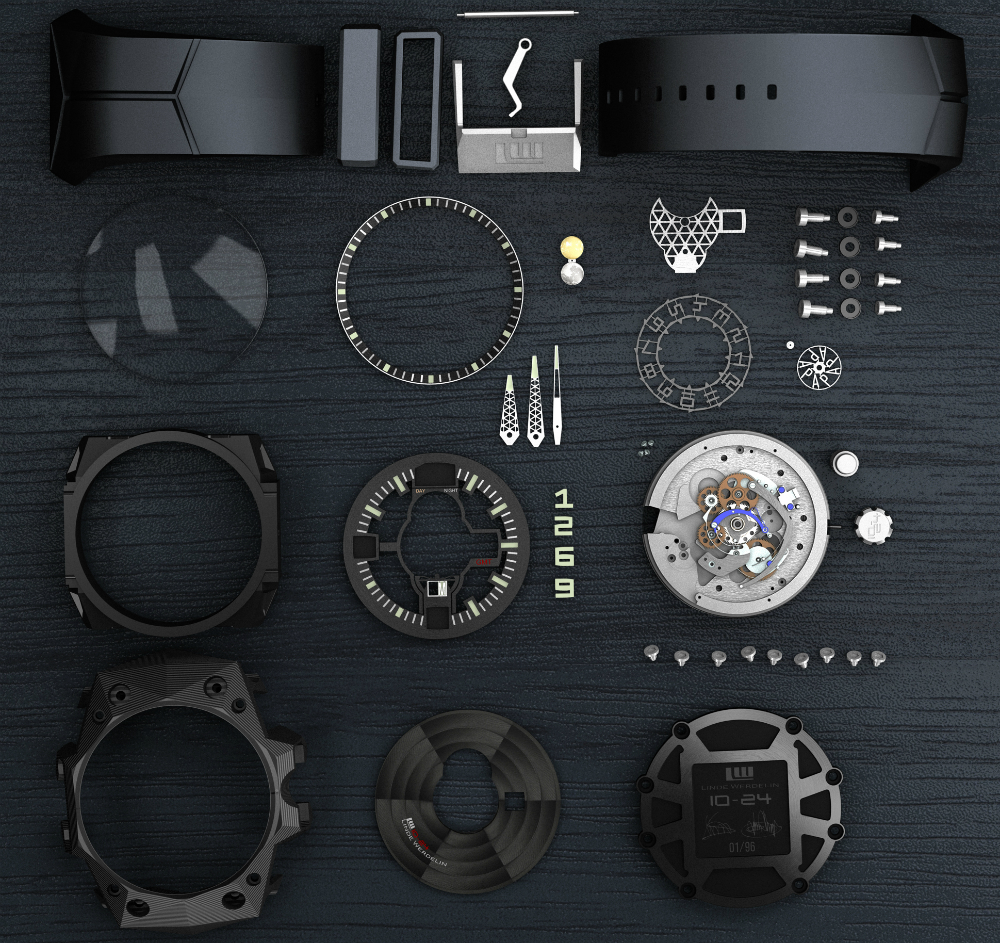 The Linde Werdelin LW 10-24 GMT is offered in two variants, one in an 18k rose gold outer case and the other with a 3DTP outer case, each housing a domed sapphire crystal. Not ones to forget their GMT legacy, it also features a second time-zone complication displayed digitally via a window at 3 o’clock, along with a day/night indicator at 12 o’clock and an AM/PM indicator at 6 o’clock. Overkill for some, but this is a Linde Werdelin, after all. No matter your preference when it comes to their watches, it’s not hard to imagine that there are buyers for the 192 pieces, and then some. 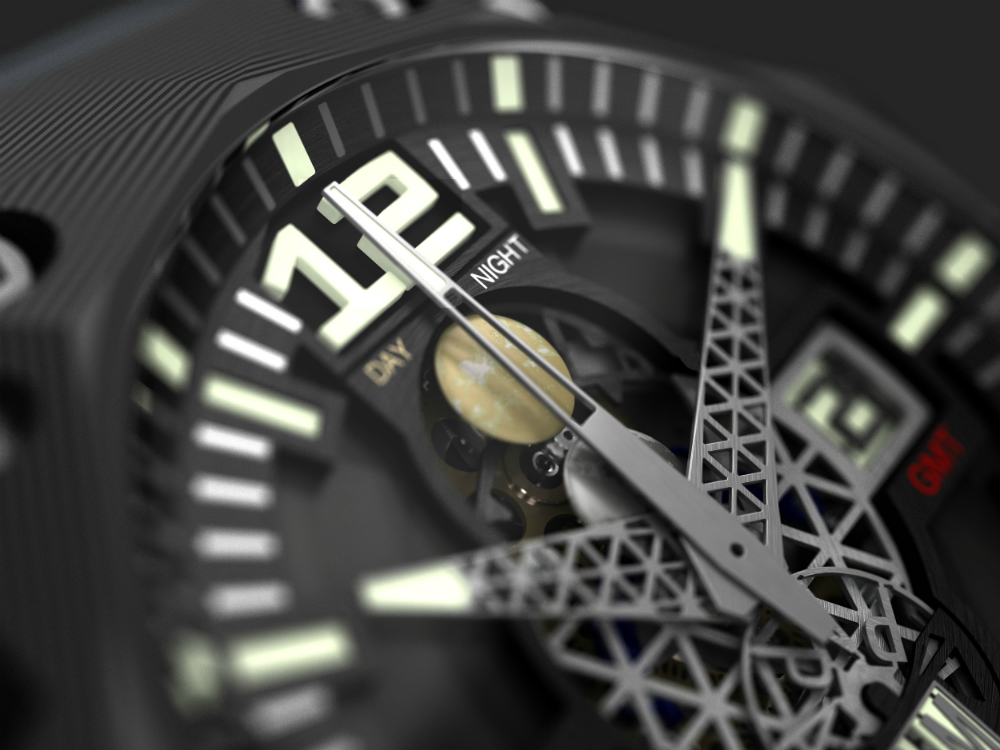 This new piece calls for a new movement and Linde Werdelin have included their manufacture LW08 which powers all three complications. Each of these complications, by the way, are all accessed via the “pusher” button which does not require the user to unscrew the crown to utilize the functions. It operates at 28,000 vph, though personally, I think the 42-hour power reserve might leave something to be desired especially at the premium price point.

Since this is a special occasion, you can order the Linde Werdelin LW 10-24 GMT with one of two different case back options. You can choose either one signed by founders Morten Linde and Jorn Werdelin or opt to have a custom engraving coordinated with their design team – if you are among the lucky few to be “invited” to part with your money. (Editor’s note: to clarify, the “invitation” means an early priority option to order was given to loyal Linde Werdelin customers who may want first dibs, but it’s not exclusive to these people. Anyone interested can reach out to the brand to request an invitation, to be clear.) 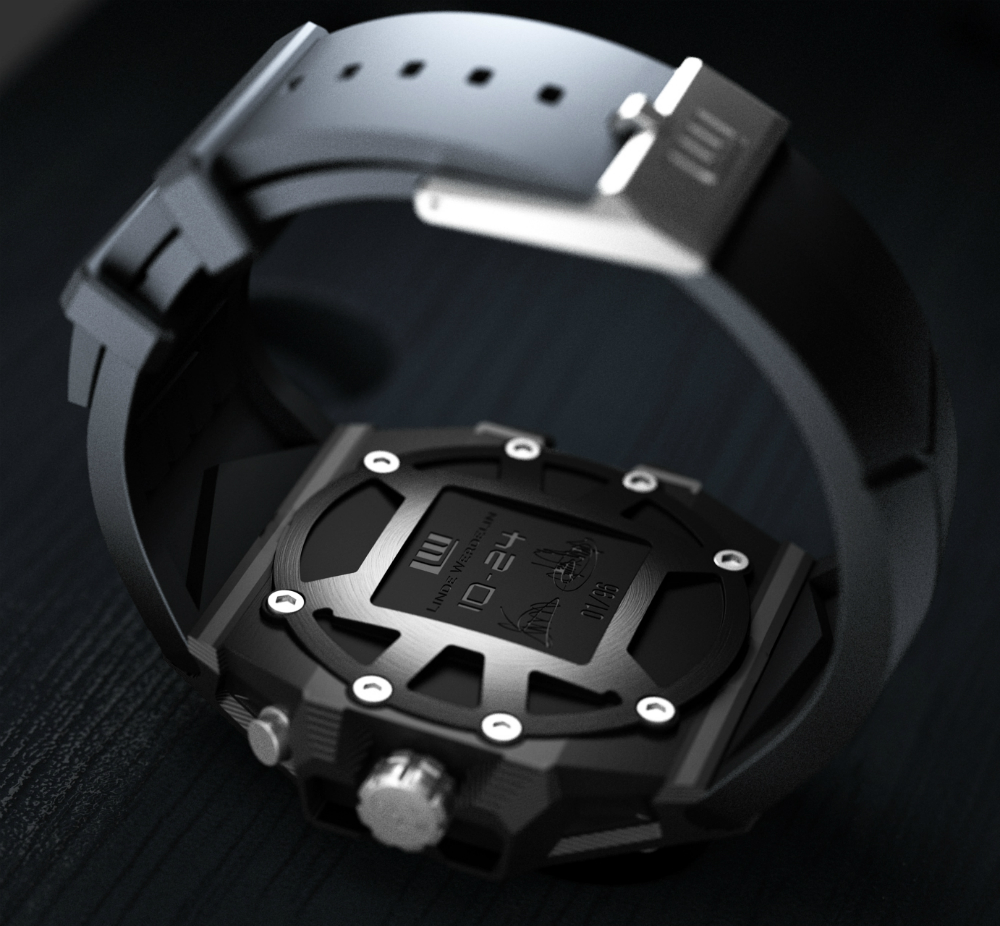 Looking at the two, the 18k rose gold model stands out and skirts the line of sporty and sophisticated. The black and rose gold contrast really make this stand out as a piece that would be at home with a suit or even the most casual of attire while the 3DTP Carbon model is a decidedly more rugged offering. Either way, the Linde Werdelin LW 10-24 GMT comes off as rather angular but not in a capacity that detracts from its sleekness. There are plenty of GMT watches out there that clutter their dials with way more information that most really need, and the bold, clean lines here really work to create solid legibility. 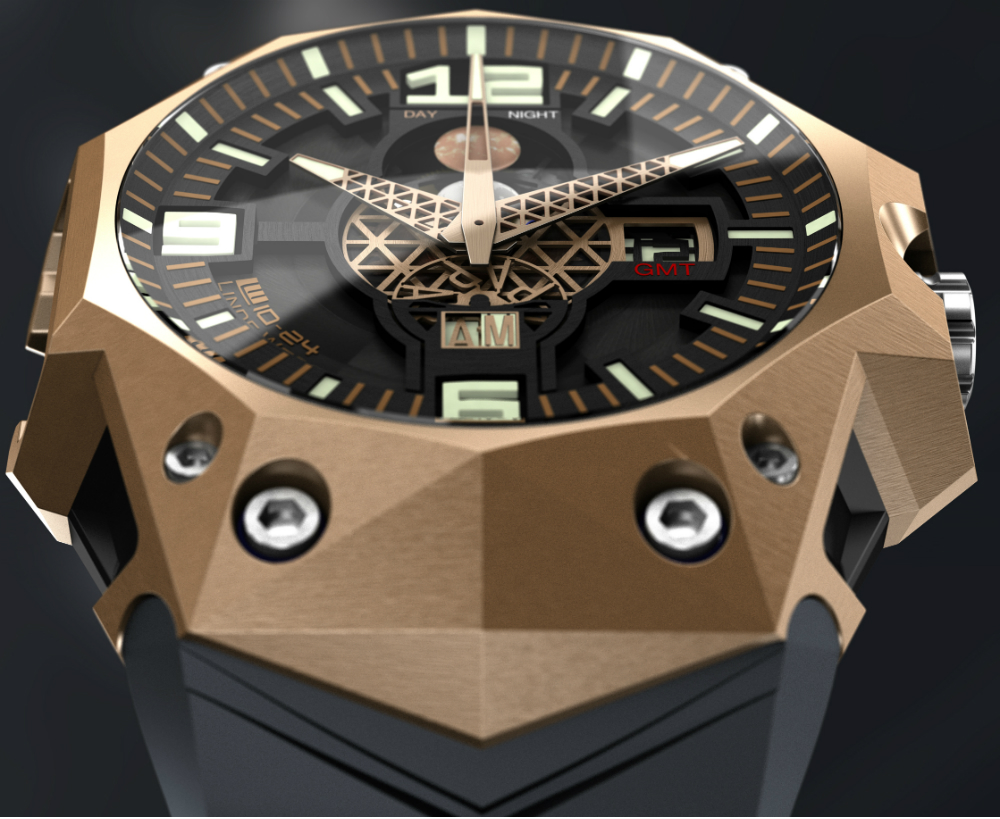 Each model will undergo a 96-piece run, so quantities are quite small. Again, these pieces can be purchased via invitation only so it will be interesting to see what Linde Werdelin has planned for the near future. The Linde Werdelin LW 10-24 GMT is available in 18k rose gold and 3DTP carbon and pricing is CHF 39,000 and CHF 27,000, respectively. lindewerdelin.com