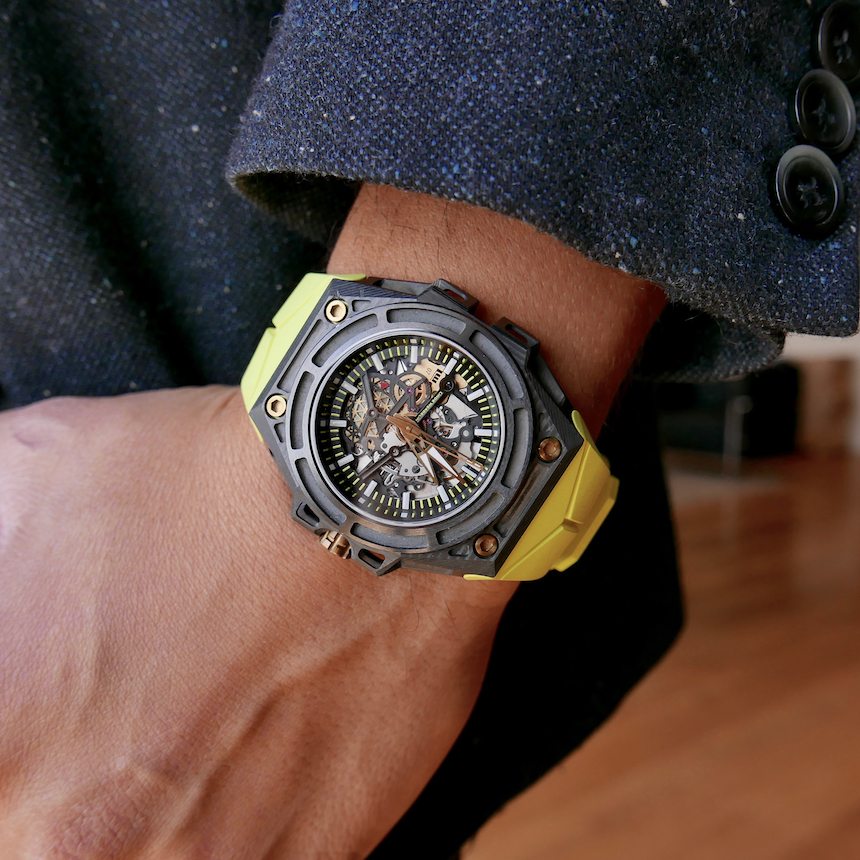 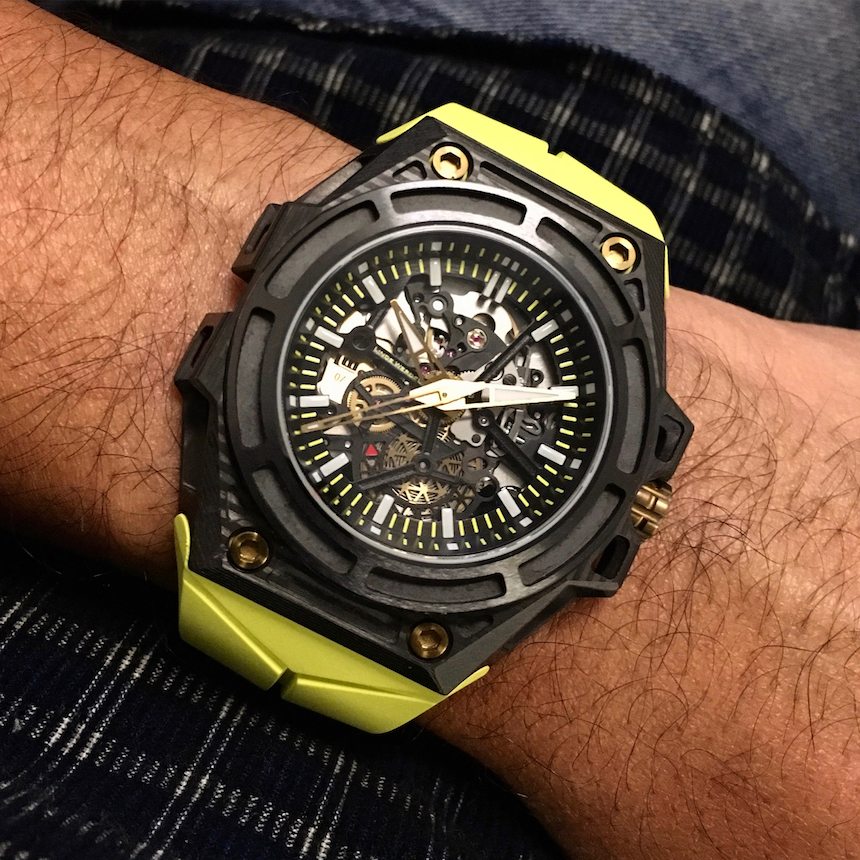 Linde Werdelin is celebrating its 10-year anniversary, and at Baselworld 2016 the brand introduced a new SpidoLite model that uses the 3DTP Carbon technology that has recently been the hallmark of Richard Mille, Audemars Piguet, and other modern sports watch brands wanting a material that is light, hard, and exclusive. The Linde Werdelin SpidoLite 3DTP Carbon watch follows in the steps of these über-luxurious watch makers and does it with a microbillé finish while maintaining their unique aesthetic and DNA, love it or hate it. 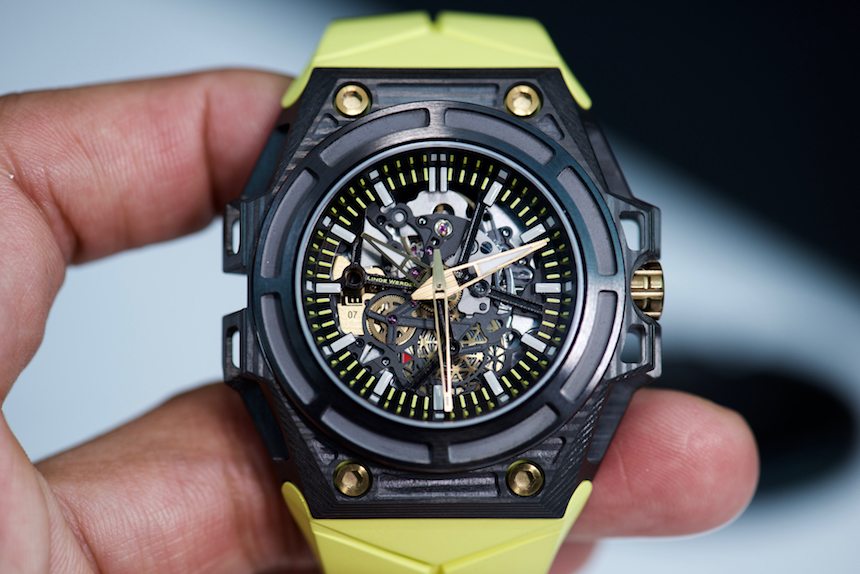 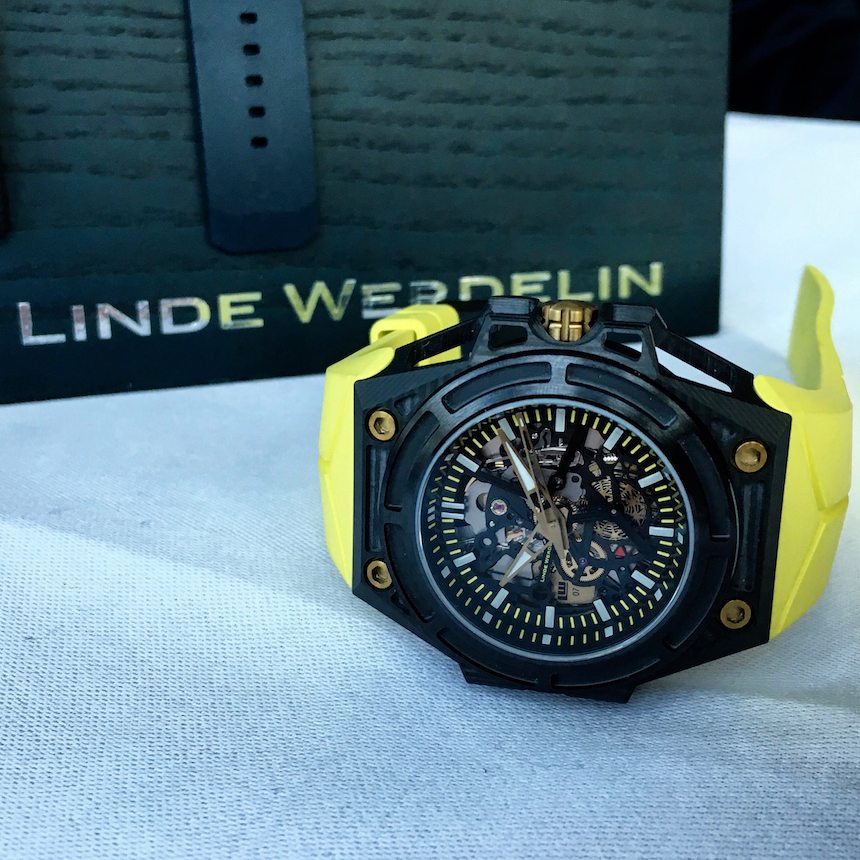 While Linde Werdelin has its detractors, based on comments here and on social media, for me, they create some of the most highly satisfying modern watch designs. I’ve owned an Oktopus II for about a year now, and I never tire of wearing it. And with LW exchangeable rubber straps, I change the look for summer and other seasons in an instant, giving it different vibe throughout the year. I believe evoking strong feelings is a sign of design success for a modern watch brand, and with Linde Werdelin while there are some critics, there are also more than a fair share of avid fans. 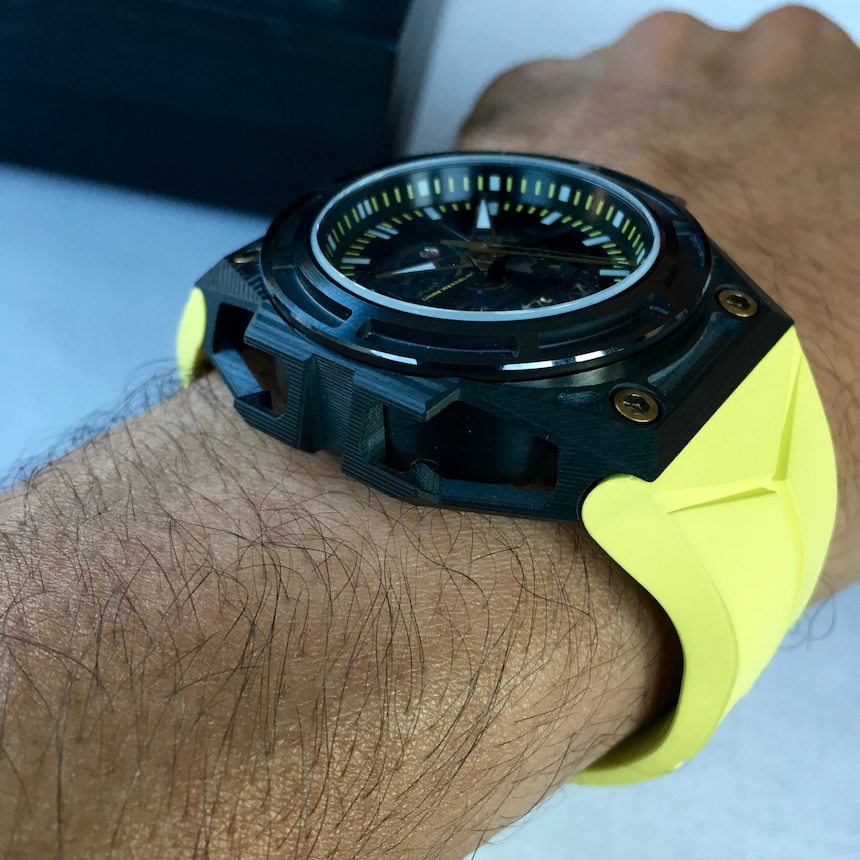 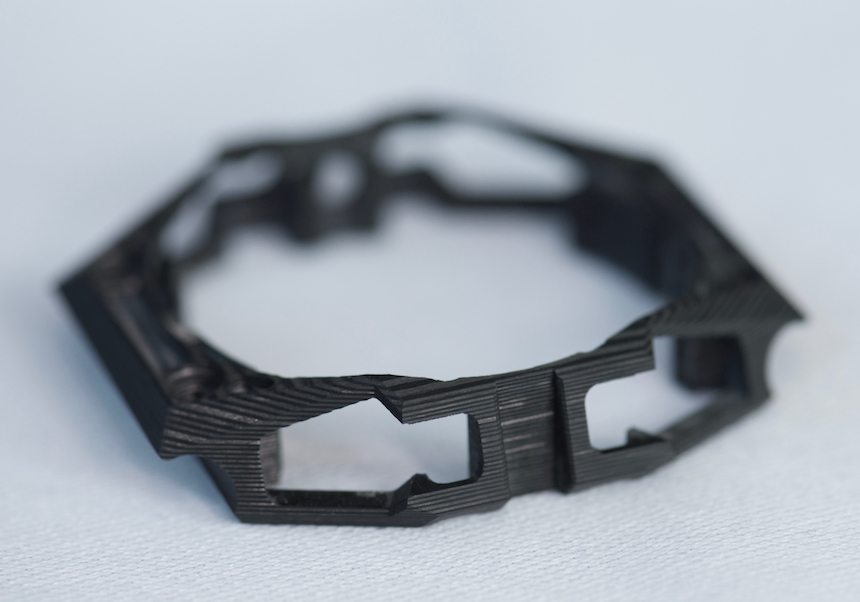 The first thing one notices with the Linde Werdelin SpidoLite 3DTP Carbon is the patented LW yellow strap. This is the same strap used on the original Oktopus II yellow. I love the strap and feel it contrasts well with the black carbon case. Like all of the SpidoLite watches, the 44mm case is itself skeletonized, reducing it to what amounts to a carbon shell with an inner section that uses a new material from Linde Werdelin that they claim weighs just 3.8 grams while having the strength of steel. 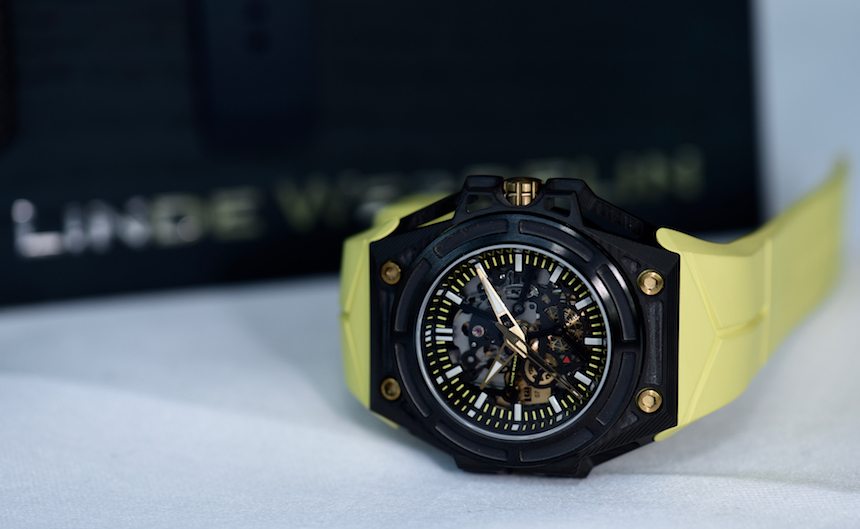 Regardless of your thoughts on the subject or whether you care about these Formula One type tactics and technology applied to your watch, the effective result is a watch that is super light and comfortable at a mere 90 grams. This was easily the lightest and most comfortable watch I have ever worn for an extended period, and the lightest Linde Werdelin on record. 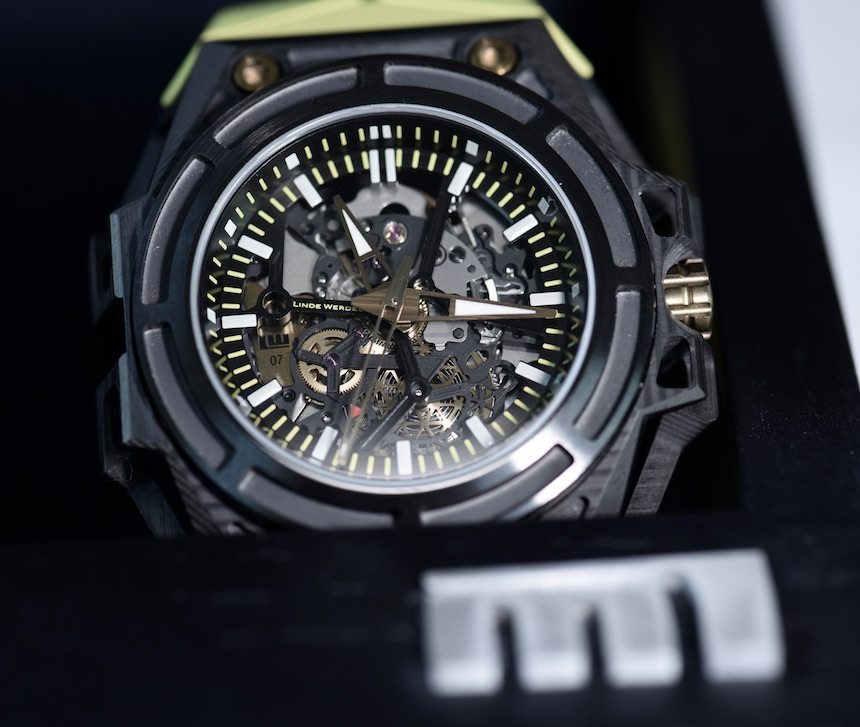 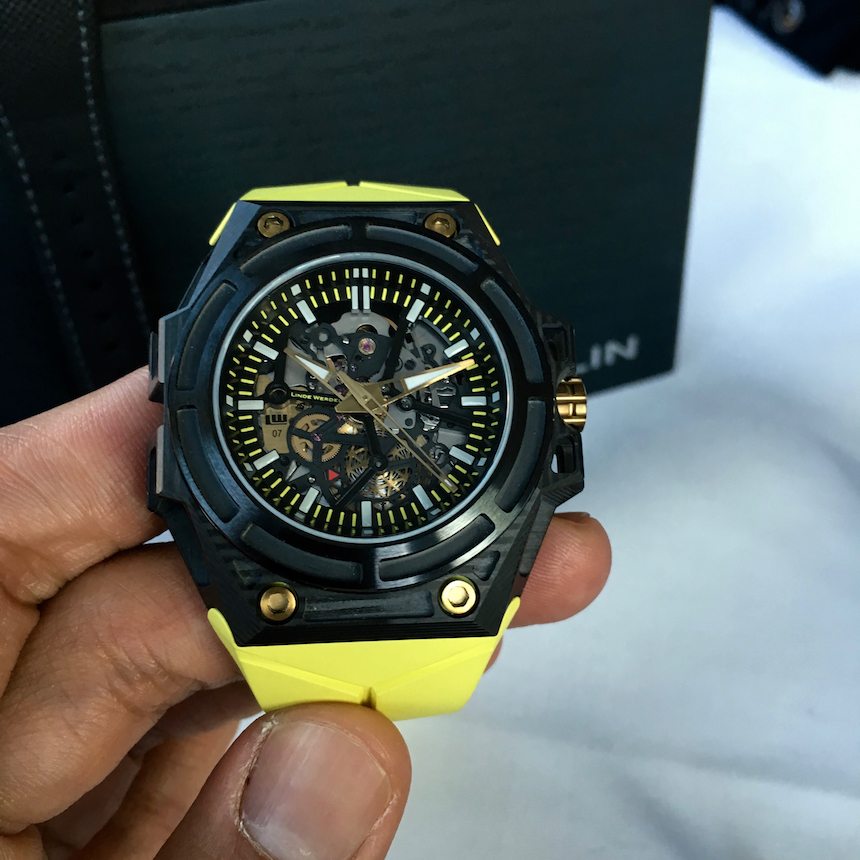 Looking down at the dial, past the ceramic bezel, though the crisp and clear sapphire crystal, and then further through the skeletonization of the dial, one can see the LW07 three-hand movement specially made for Linde Werdelin by Concepto. There is no date aperture and this actually works well, as the date wheel would distract from the view of the dial. 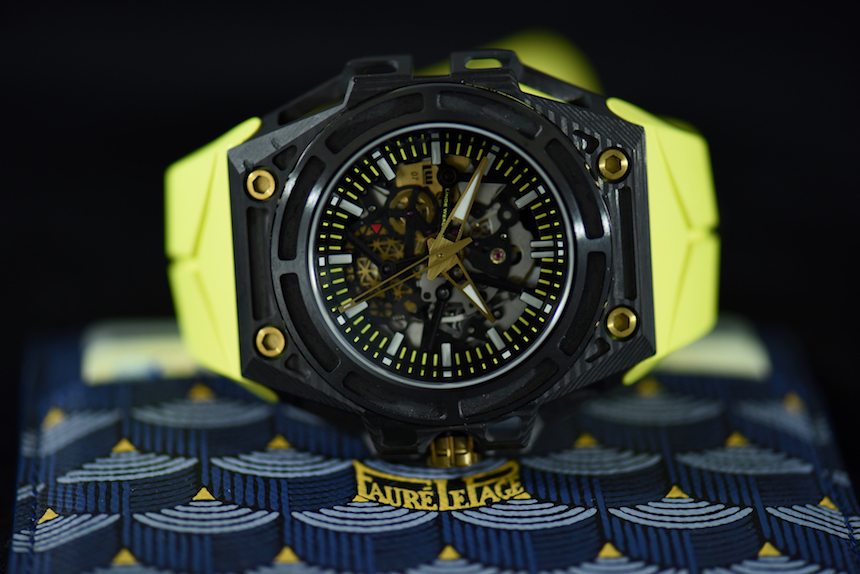 The hands are typical of Linde Werdelin and are also skeletonized. This can rub some the wrong way as it can make the watch harder to read, and that’s a legitimate complaint as far as legibility goes. This is actually exacerbated due to the fact that the hour and minutes hands do not contrast much. They each have their tip filled with Super-LumiNova which works fine at night, though not enough to qualify as a great night watch. Parts of the chapter ring indicating five-minute increments have small applications of Super-LumiNova as well, but like the hands, this helps only slightly at night. 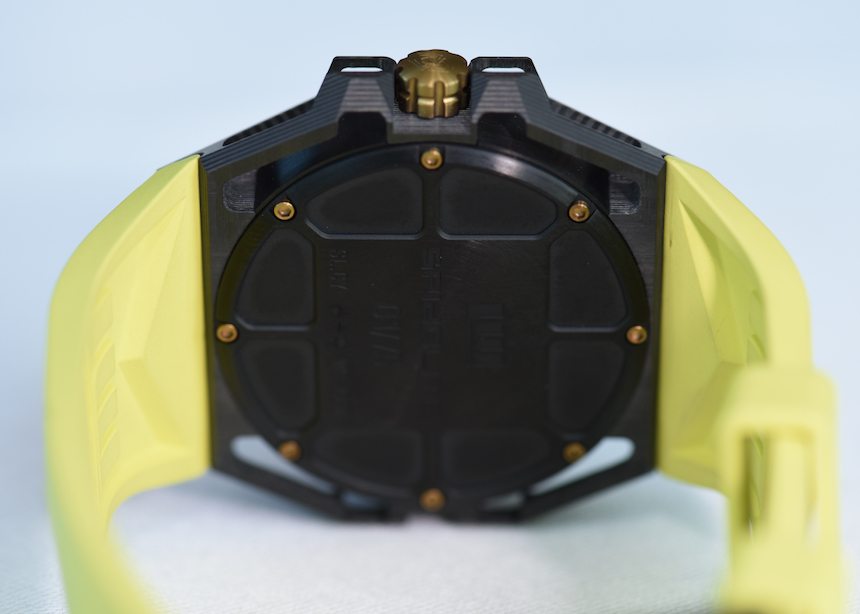 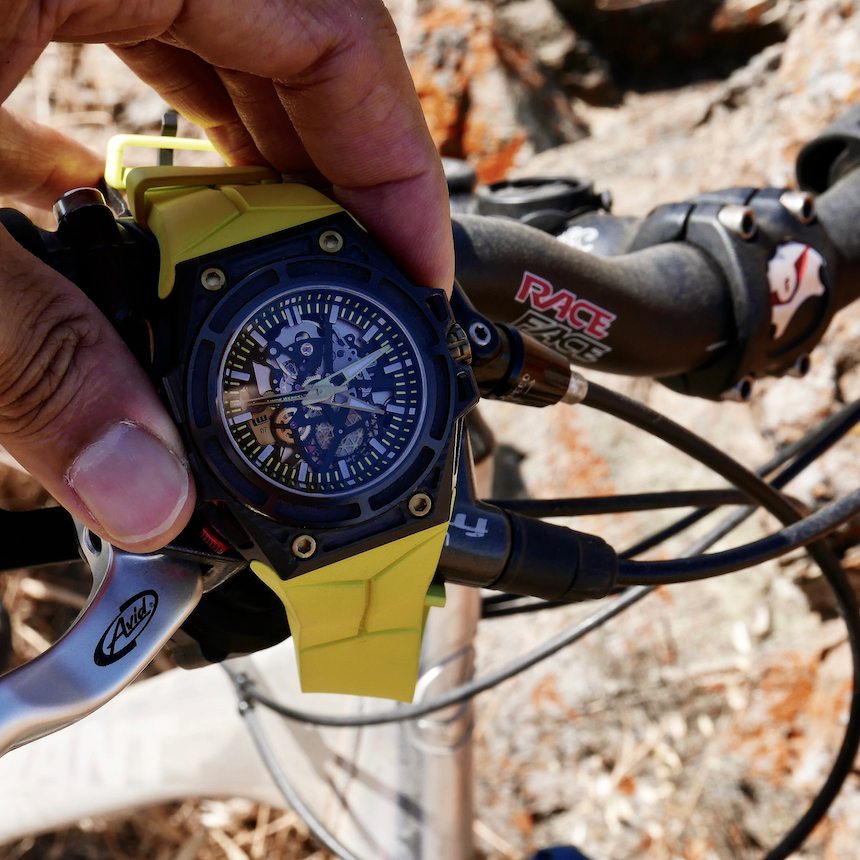 For me, these shortcomings are minor, as the watch shines with its light weight and unique modern design. The case back on this watch is not exhibition, which at first bothered me a bit as one is not able to see the other side of the movement. However, as I wore it, two things became apparent. First, the front side is skeletonized enough that a transparent case back would perhaps become distracting with a view of the wearer’s wrist. 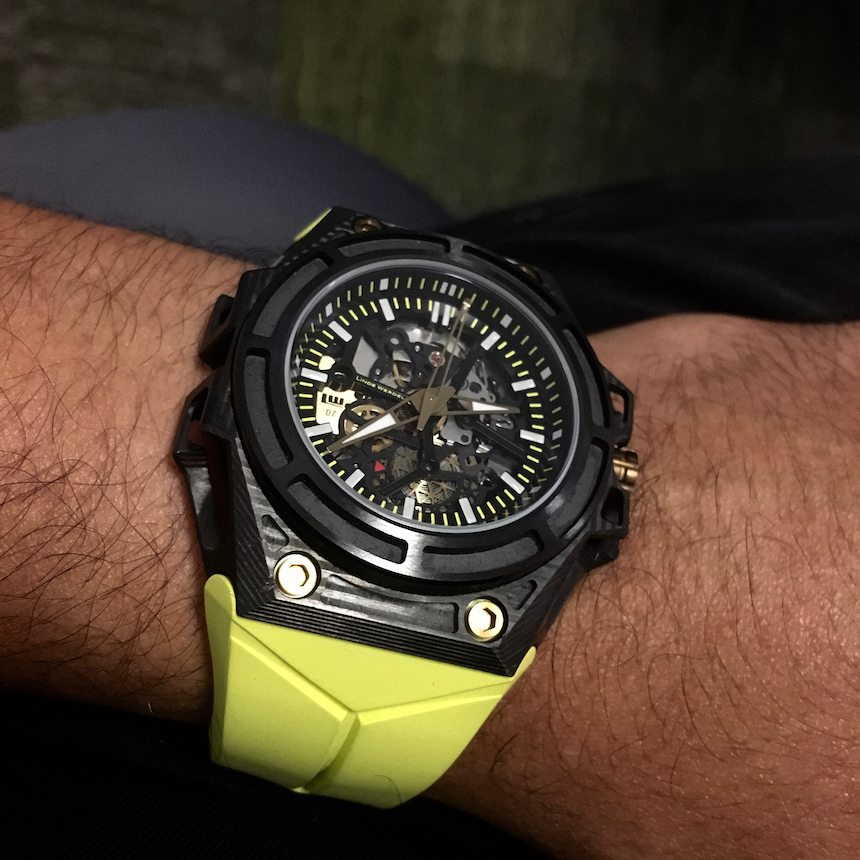 Second, with a solid DLC-treated titanium case back, the strength of the watch is perhaps increased by creating a solid foundation for the case. Remember that Linde Werdelin watches are designed as serious sports watches. The Oktopus is designed as a dive watch, while the SpidoLite is designed as a skiing and hiking watch. For each, the unique Linde Werdelin advantage is the ability to add on an LW electronic instrument: the Reef for diving and the Rock for climbing. 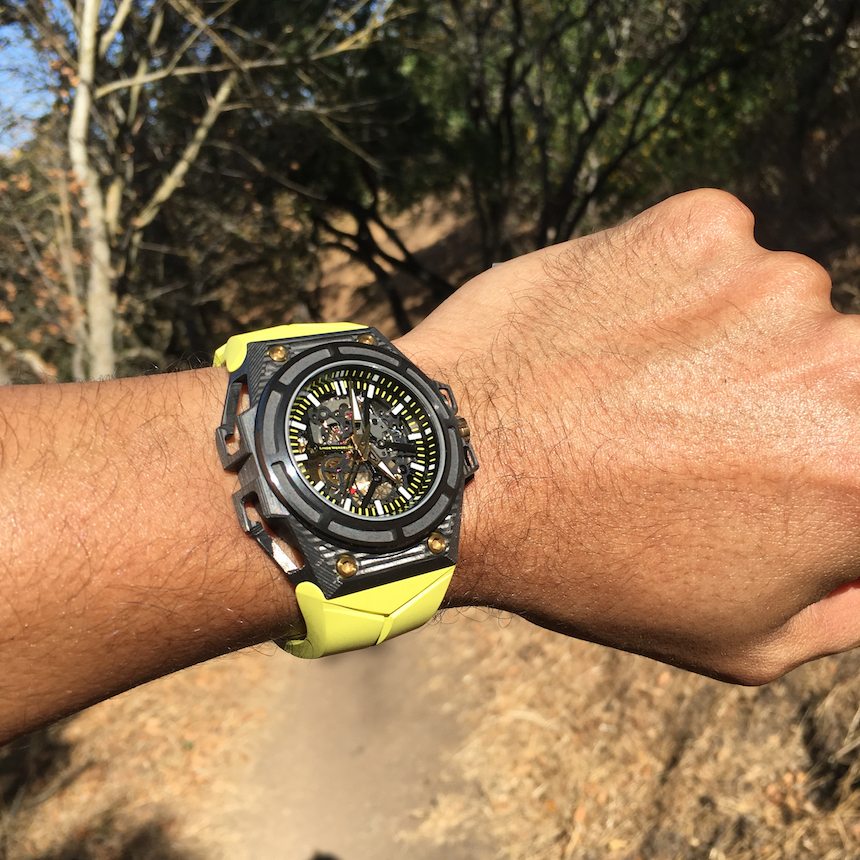 While summertime where I live in the San Francisco Bay Area is hardly a time for skiing, even in the beautiful peaks of the nearby Lake Tahoe area, I did take the Linde Werdelin SpidoLite 3DTP Carbon mountain biking and hiking. It performed admirably. I did not doubt it would during my simple couple 1000-foot hikes, but what was unexpected was how well it would perform during the mountain biking ride.