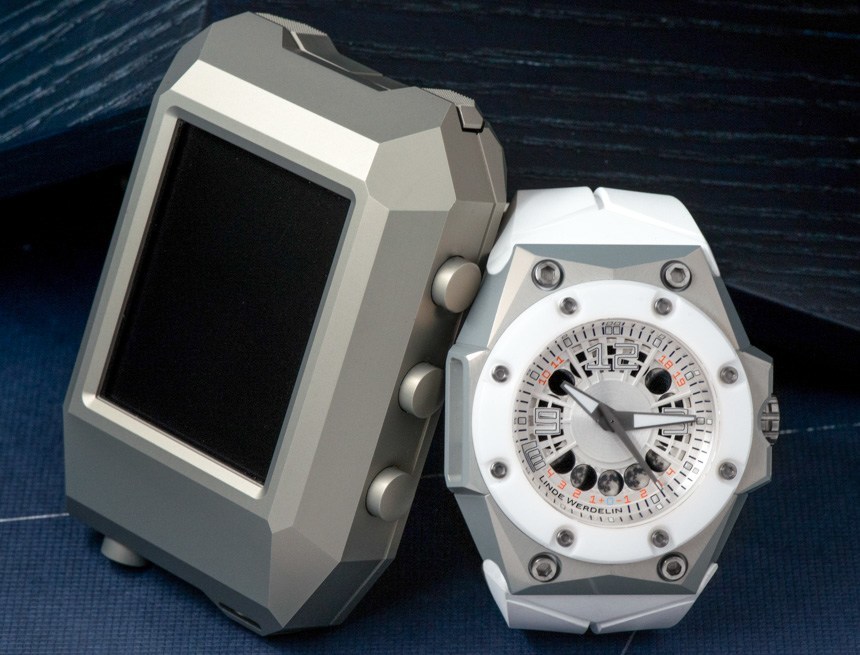 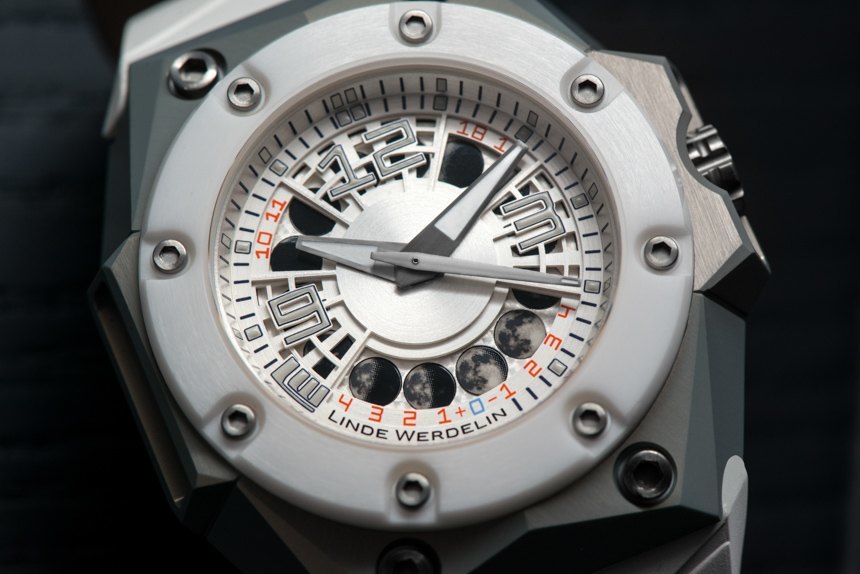 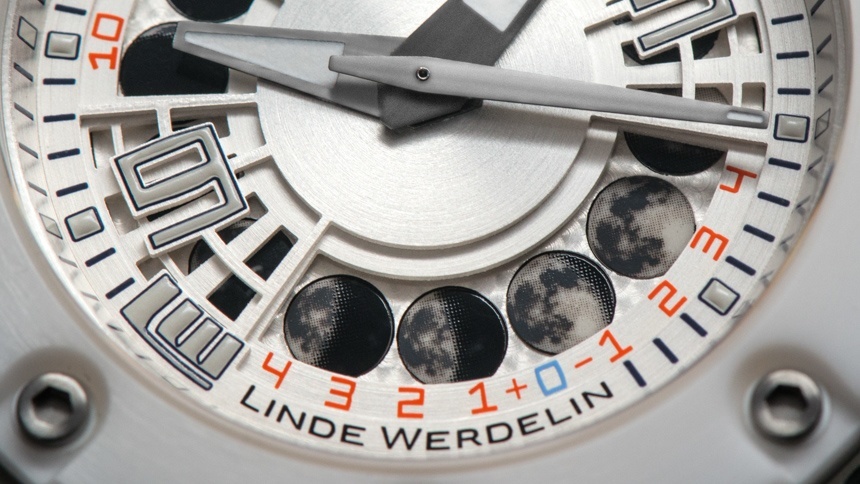 The color isn’t the only thing that is new with this watch: Linde Werdelin has redone the dial, which is made up of 5 layers, to have the top layer further skeletonized. This allows more phases of the moon to be seen by the wearer at the 10 and 11 o’clock positions. In addition, LW has gone and created an “aerospace material” that they’re calling Alloy Linde Werdelin (or “ALW”). And while that may sound a little gimmicky, according to Linde Werdelin it’s half the weight of titanium and a twice the strength of steel. The material has previously been used in a “colorless” form, but on the Linde Werdelin Oktopus MoonLite White, it’s intended to absorb light and mimic the way an octopus changes colors. We’ll have to see how well all this translates in person, but it is true that the trademark angular case of Linde Werdelin looks rather stunning in this cool, pale grey color. 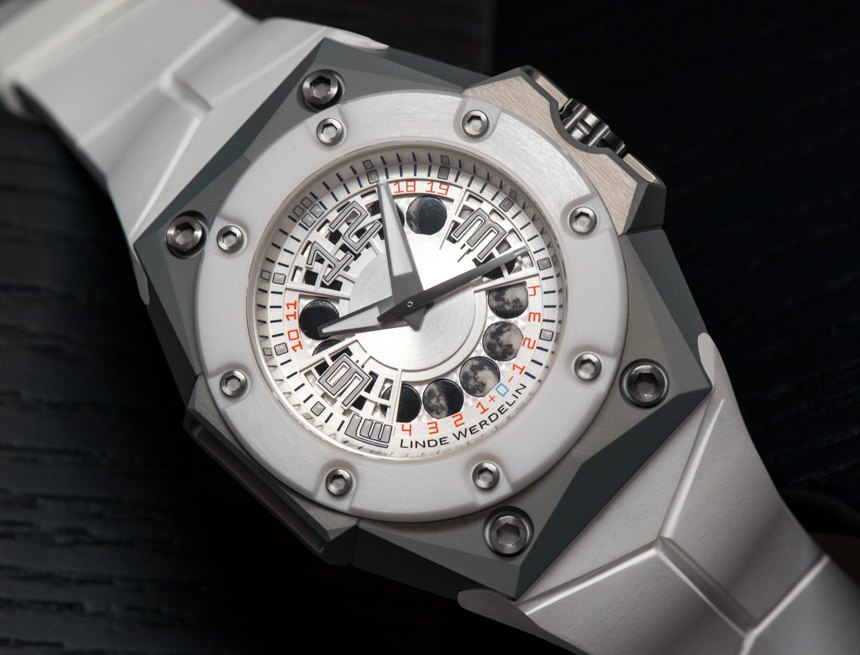 The watch is 44mm in diameter and is going to come on a white rubber strap which looks fantastic – in my opinion, that is. A dive watch without a rotating bezel isn’t a dive watch for a lot of people, but this thing still has 300m of water resistance and it also has something else up its sleeve for when you want to take it diving – Linde Werdelin offers its dive computer, the “Reef” which can keep track of a diver in real time. Using sensors, a 3-axis compass, an MPU platform, and an alarm system, it provides a lot of utility for the serious diver and it’s been designed in a way that it can be quickly and easily popped on the cases of the brand’s dive watches. Note you’ll pay extra for it.

As far as the movement goes, you’ll find the in-house-developed moonphase complication on top of a base movement that supplies 42-hours of power reserve, and runs at a frequency of 28,800vph (4Hz). If you’re trying to read the moonphase, the blue “0” tells you the current moon phase and the orange numbers tell you past and future phases of the moon. While I’m on this topic, let me just add that I think those color choices are very cool, it almost feels like it’s tapping into a midcentury modern color scheme. In any case, the monochromatic design has definitely been enhanced by these added splashes of orange and blue on the dial. 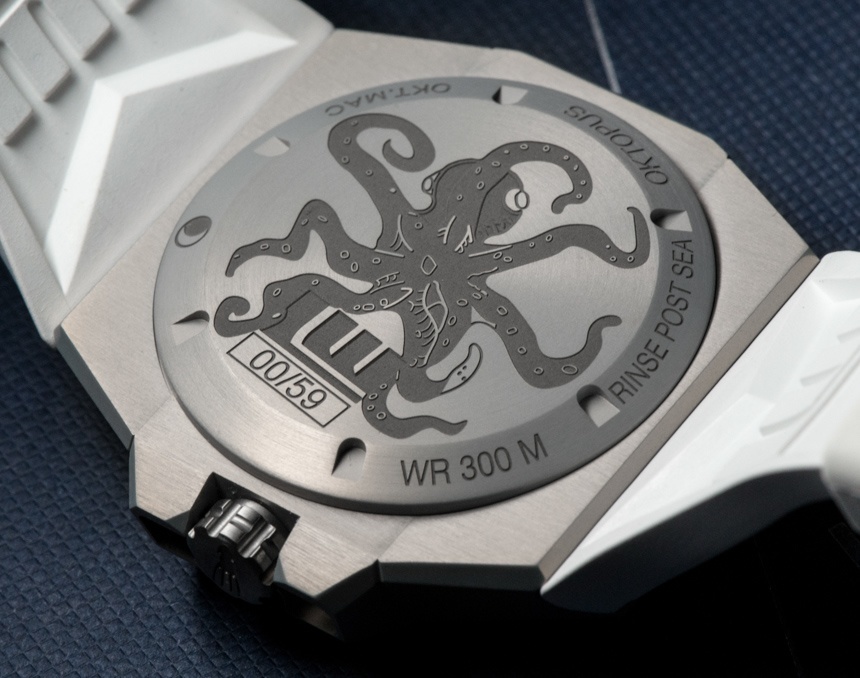 As mentioned before, there will be 59 numbered pieces produced. In my opinion, this is a contender for one of the more attractive watches from a brand with an already strong aesthetic personality. Price for the Linde Werdelin Oktopus MoonLite White is $18,500. lindewerdelin.com