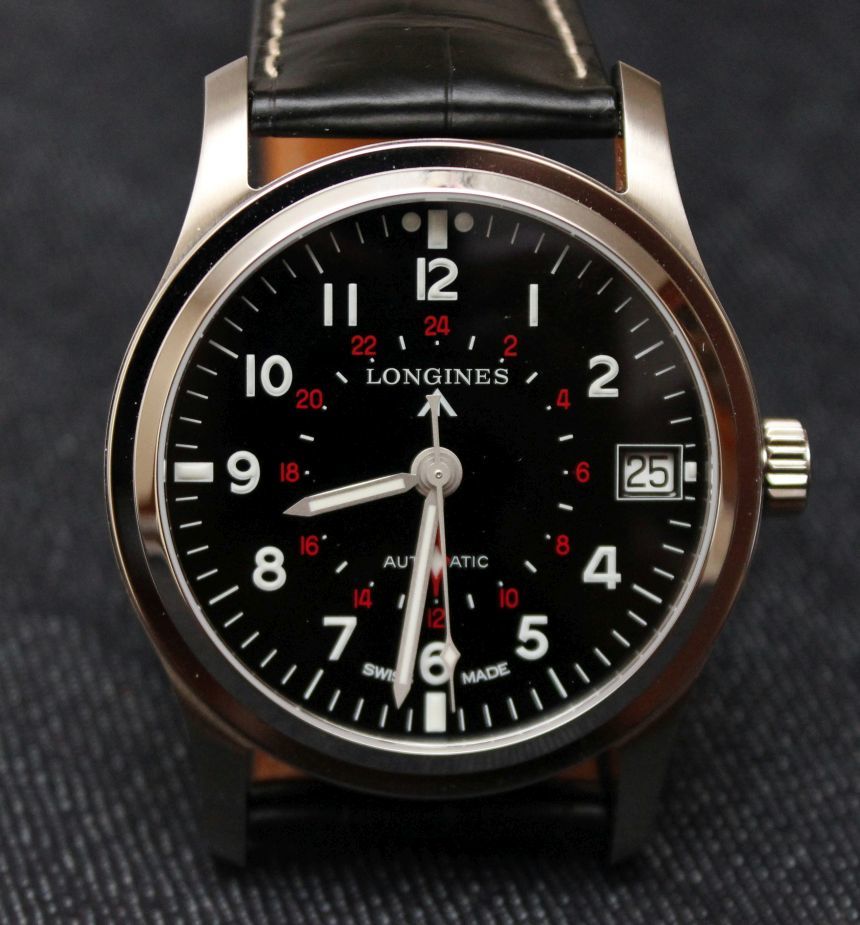 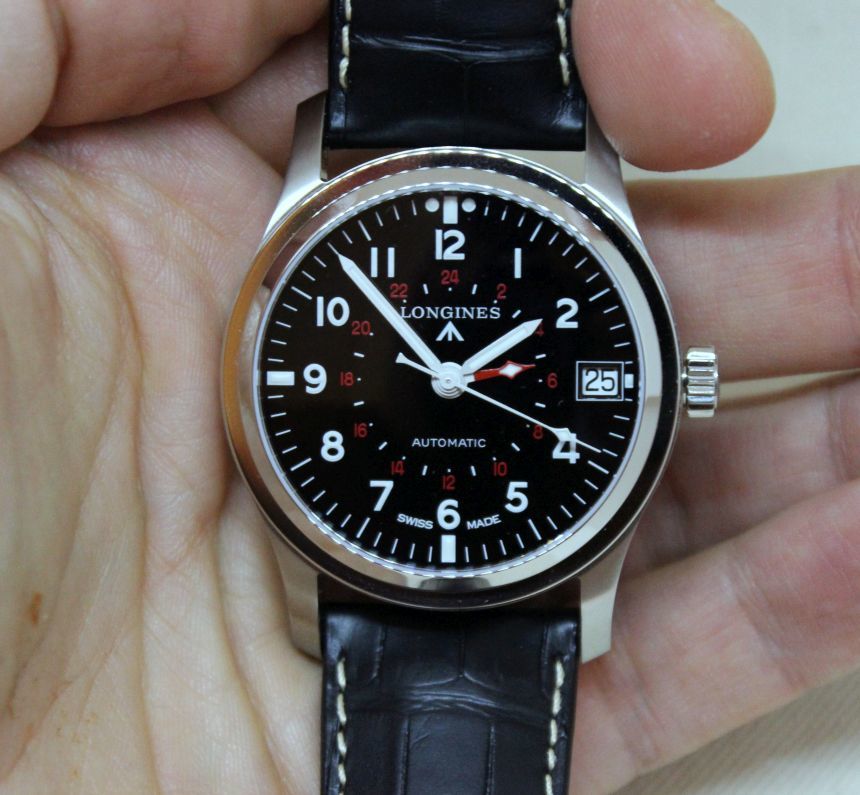 These days, it has become rather popular, or dare I say trendy for brands to reminisce. When you have a brand that has its foundation in the 1830s, as Longines does, the assignment of “Heritage” to a collection can carry a bit more weight. And when you can base a new watch off of something produced in the 1950s – for the British Army, in this instance – then Heritage is an appropriate name. In the case of the Longines Avigation, it makes for a modern watch with a nice retro appeal.

While the watch itself may have some retro-inspired design cues, it is very much a modern watch. The 44mm steel case feels pretty beefy (almost to diver proportions), and the 120g weight on the strap hardly ever let’s you forget that the watch is present on your wrist. Therefore, this is likely a watch that they intended to be on bigger wrists. On my 7.25″ one, the lug-to-lug was almost too big and I did have the strap down to its smallest hole. 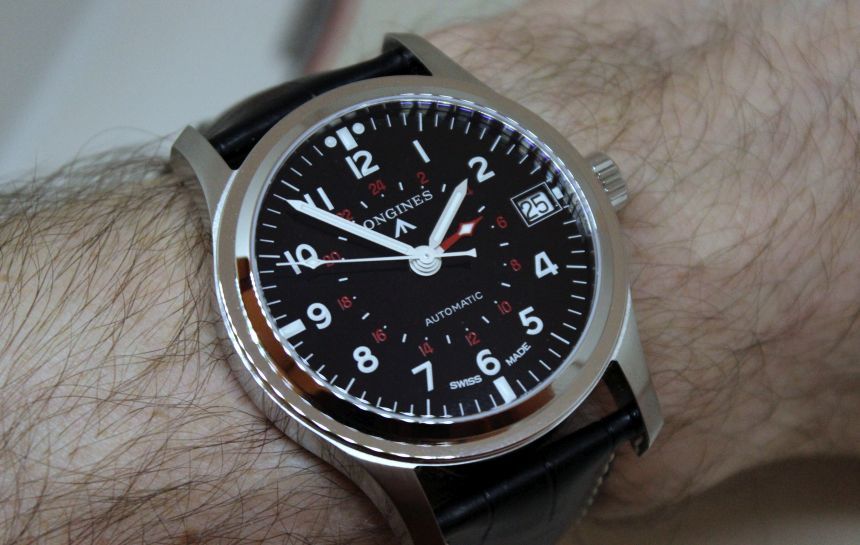 I call these out not as hits against the watch, nor it’s rather well-done croc-embossed leather strap – it is just something to be aware of, whether you have smaller wrists and perhaps want to avoid this, or have larger wrists and are in search of something that fits you well. One additional thing to be aware of with the strap is that it was a tad squeaky in the 25mm lugs. This is somewhat of pet peeve of mine, and I was surprised to see it on this watch; with the odd (and large) lug width, replacement would not be a simple route to go, either.

Alright, that’s enough about the strap. One very great thing about a larger case like on the Longines Avigation is the fact that the dial can be larger as well. Combine that with the crisp white-on-black as we have here, and you have a very legible dial. This is helped along by the appropriately-sized handset (at least in terms of length, as the hands could, perhaps, be a touch wider) that stands out in stark contrast to the dial. 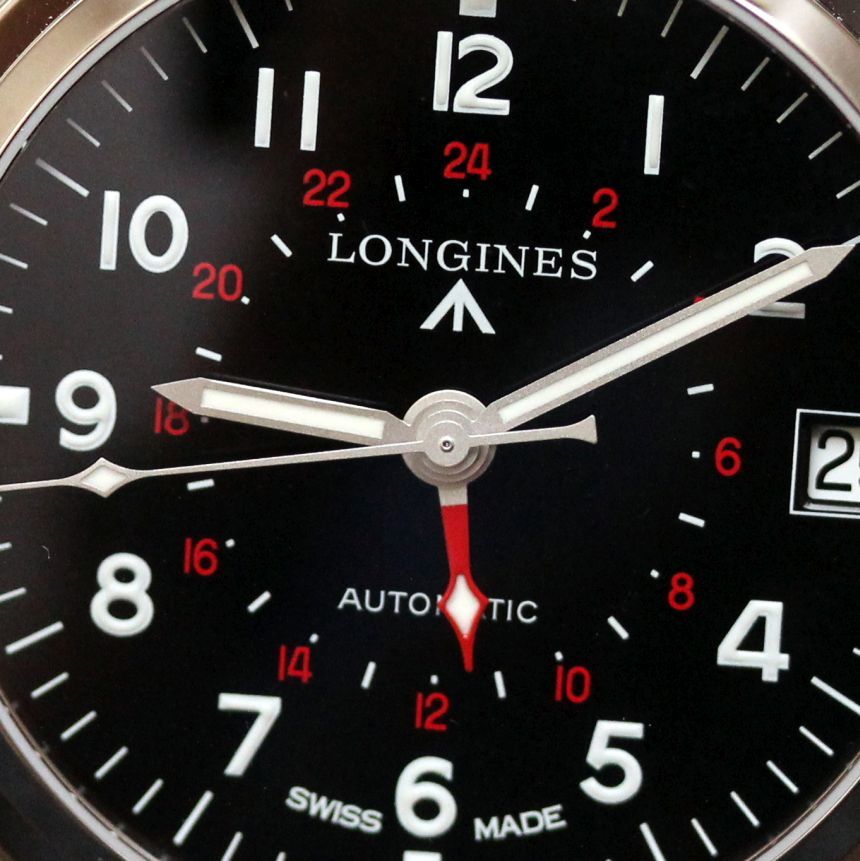 More subtle, in terms of dial readout, is the 24-hour (or GMT) scale that is printed out in red; the same red hue appears on the GMT hand. While it’s fairly easy to pick out in the pictures, I found that it actually faded away quite nicely. What I mean by this is that if you’re just checking the time at a glance, your eyes gloss over the scale. When you’re looking for that second time zone, though, it’s a fairly simple exercise to pick it up.

That leaves us, at least on the dial, with just the rather large date display that takes the place of the 3 numeral. On one hand, I do rather appreciate the larger cutout, which kept this complication easy to read. Given its size, however, the lack of going with a reversed date wheel really makes the window stand out (as does the white outline). While it may be in keeping with retro looks to have the white date window, I think the watch would look a lot slicker if it were a black window with white numerals. 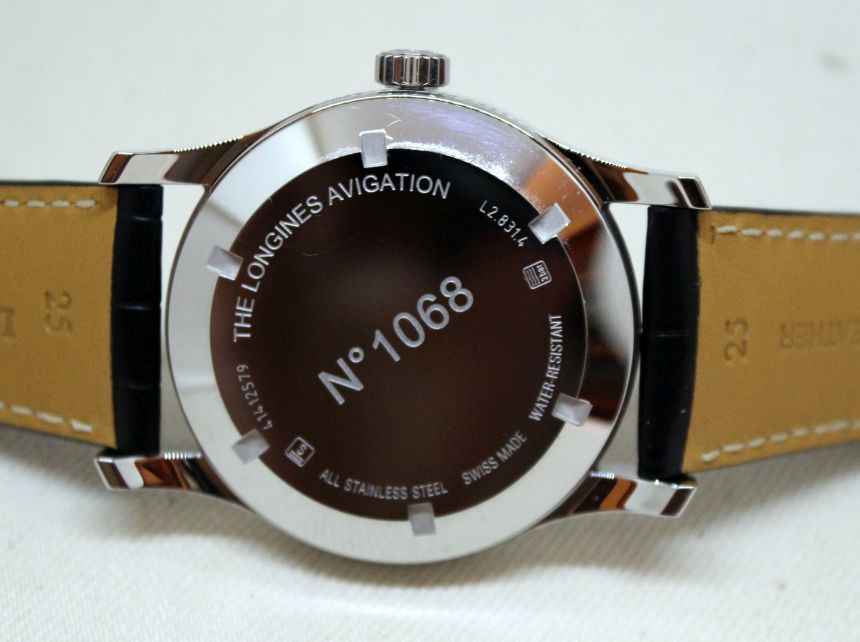 Flip the case over, and you will not see an exhibition case back. The L704.2 movement (ETA A07.171 base) is tucked away behind a polished steel caseback that carries some fairly simplistic markings, and a large serial number smack dab in the middle. The high polish is carried throughout the case, even on the signed crown and the steps that appear around the bezel. As you can see from the profile shot, the caseback mirrors the height of the bezel, making for a thicker watch.

As I mentioned at the outset, the size and weight of the Longines Avigation really remind me of a diver (though the style, of course, hearkens more to an Aviator than a diver). With that mindset, the watch went on the wrist and accompanied me throughout the day without a second thought. Yes, if you are not used to bigger, heavier watches, something like this would definitely weigh you down. For myself, it was not really an issue. 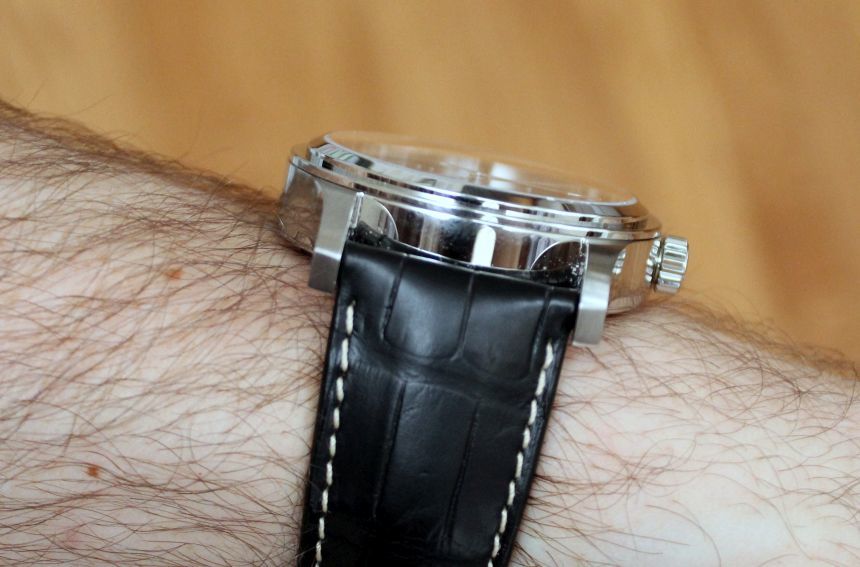 With a watch like the Longines Avigation, you really are wearing something that has an understated simplicity. While the regular person on the street would not give the watch a second look, though, show it to those who are “in tune” with the watch world, and they will appreciate what is in play here.

That’s where I come down on the Longines Avigation: if you are looking for a watch to show off with, this is not your watch. However, if you want something that is more subtle, and has details you (and perhaps you alone) can appreciate, then the $2,325 watch is certainly a nice option. While a simpler layout (no GMT or date) might appeal to some, I think it works well with the watch. It gives some more value to what might otherwise be considered (by some, not myself) a boring watch. If you’re looking for vintage looks in a modern size, the Longines Avigation is probably on your short list.  longines.com

Necessary Data
>Brand: Longines
>Model: Avigation (L2.831.4.53.2)
>Price: $2,325
>Would reviewer personally wear it: In the end, no – it’s just simply too large for a long-term engagement on my wrist.
>Friend we’d recommend it to first: This is for the guy with beefy wrists who wants something that has some “old school” character.
>Worst characteristic of watch: For me, it is just the overall dimensions. If it were shrunk a few mm in all directions, it would be a much better fit.
>Best characteristic of watch: The clean, legible dial with its GMT scale that fades away until you need it.