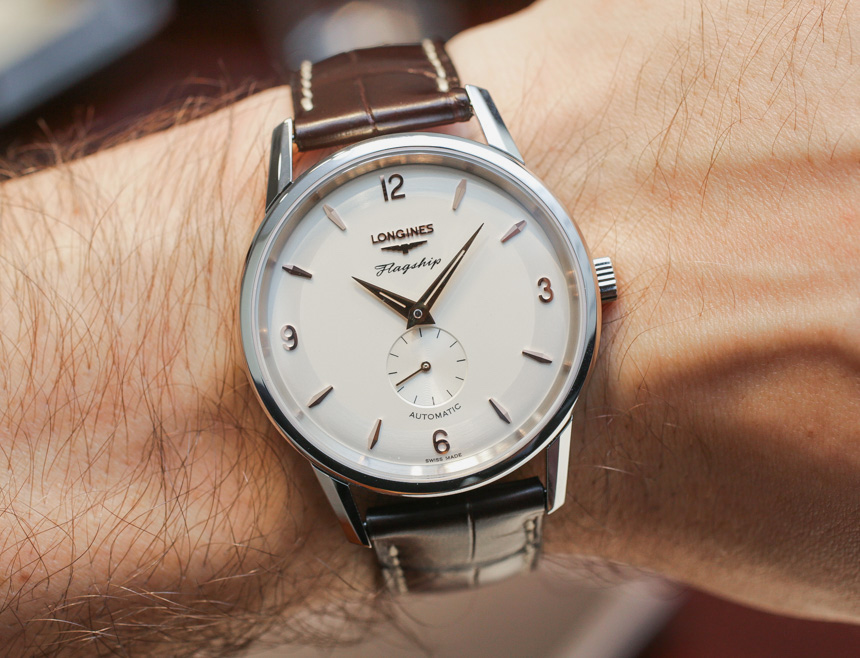 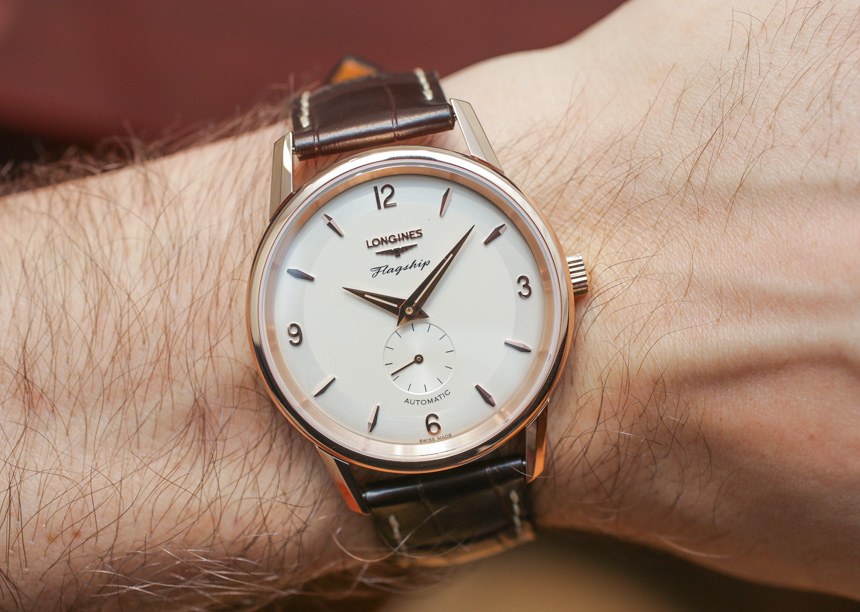 When it launched in 1957, the Flagship was, as the name implies, Longines‘ premier collection. The brand has now renewed the collection of dress watches in 2017 for the 60th Anniversary. The Longines Flagship Heritage 60th Anniversary is a vintage-inspired limited edition remake done right and is essentially an elegant dress watch with classic design and modern proportions. Here, we see three models; one in steel and two gold models in yellow and rose gold, respectively. While the gold models carry a significant price premium at close to five figures, the steel model is just a little over $2,000, which should garner significant attention. 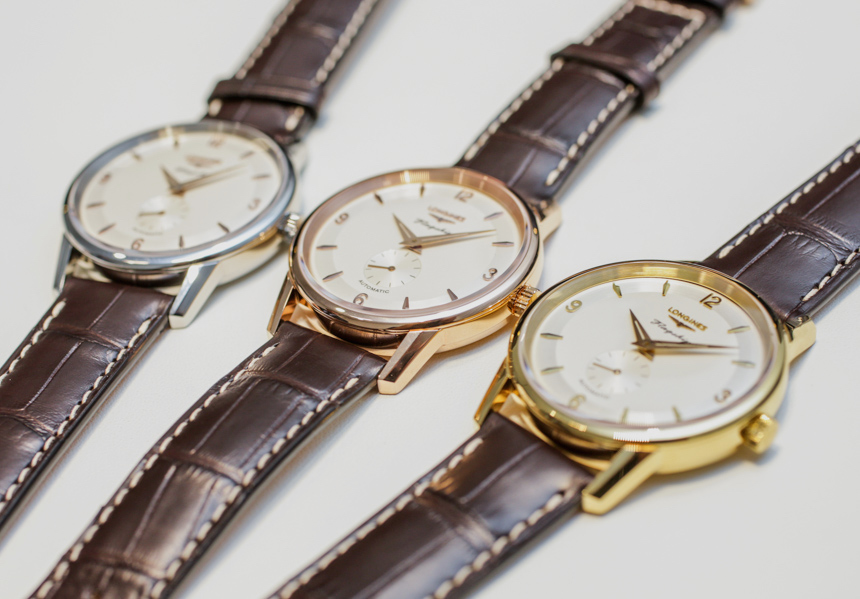 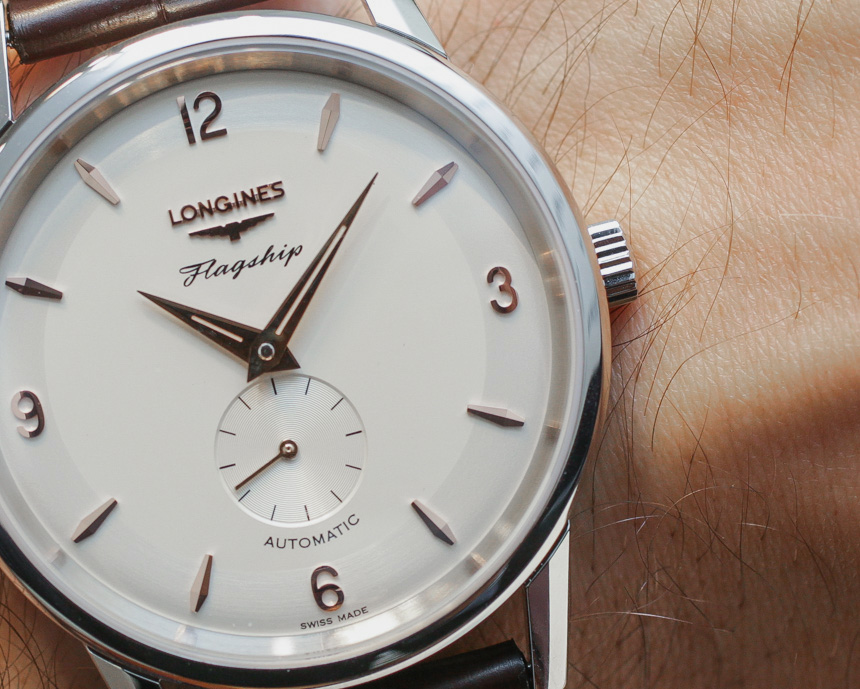 As far as vintage reissues go, The Longines Flagship Heritage is as true to form as I’ve seen. The case and lugs are immediately identifiable as being similar to dress watches from the ’50s. The long, faceted lugs are elegant but simple and the thin polished bezel, slab-sided polished caseband, and fluted crown are all signatures of dress watches from the period. Limitations in production technology back then meant that we rarely saw elaborate twists and curves to the case design and this has been maintained with the reissue. This lends the watch a quaint charm which I can appreciate. However, bearing in mind modern preferences, the case is sized at 38.5mm, which to me is spot on. Any larger and it starts to look like a dinner plate on your wrist, while any smaller may prove unpopular with modern consumers. 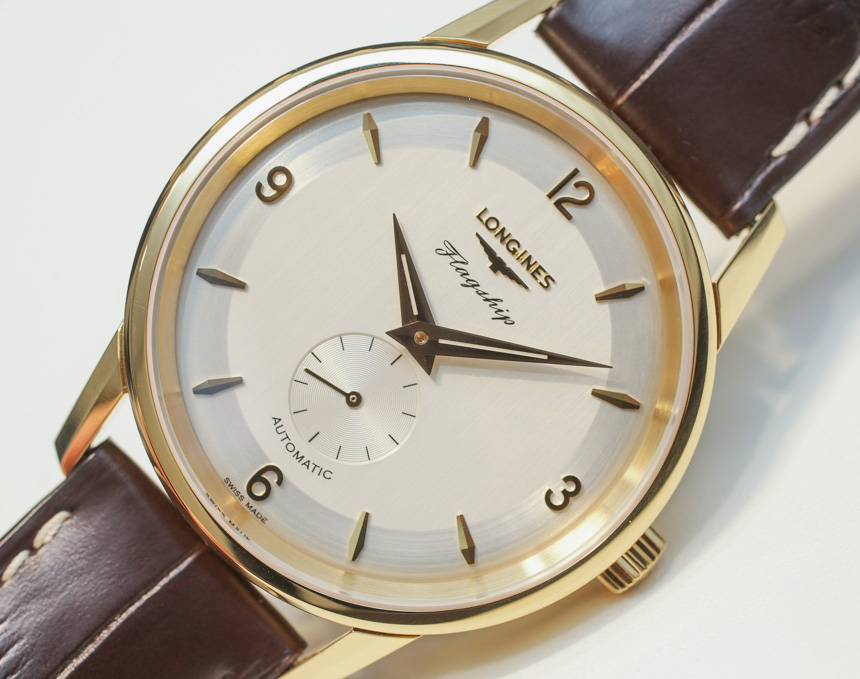 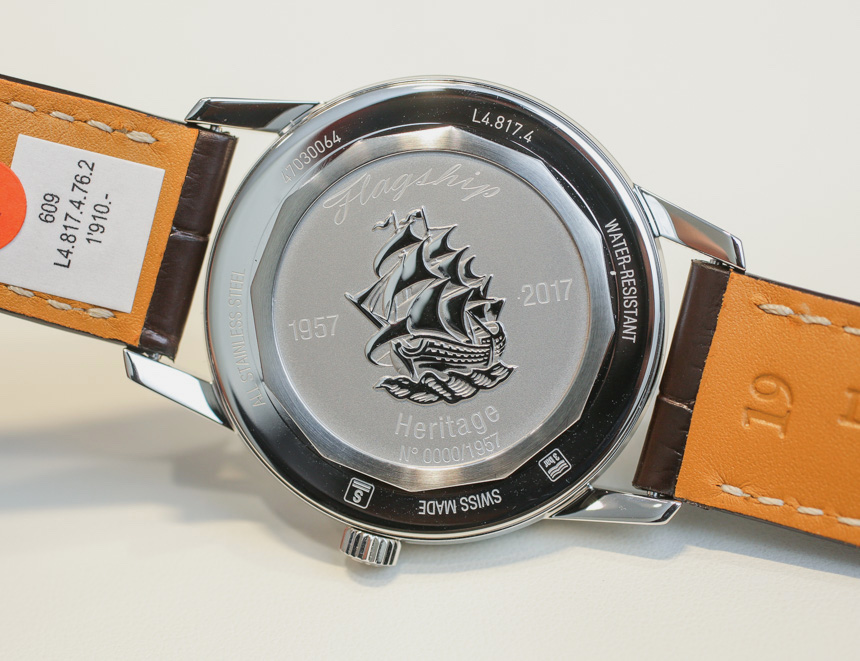 The Longines Flagship Heritage has three case material options – steel, rose gold, and yellow gold. While all three look great, I personally tend to avoid yellow gold so the steel or rose gold would be my preference. The case back is solid and screw down, which is again true to form for a vintage dress watch and stamped with the form of a caravel – a light sailing ship. I see a lot of parallels between this watch and my grandfather’s 1956 Omega Arrowhead Constellation, which is the watch that got me started in the world of watches. So suffice to say, I have a soft spot for the Longines Flagship Heritage. 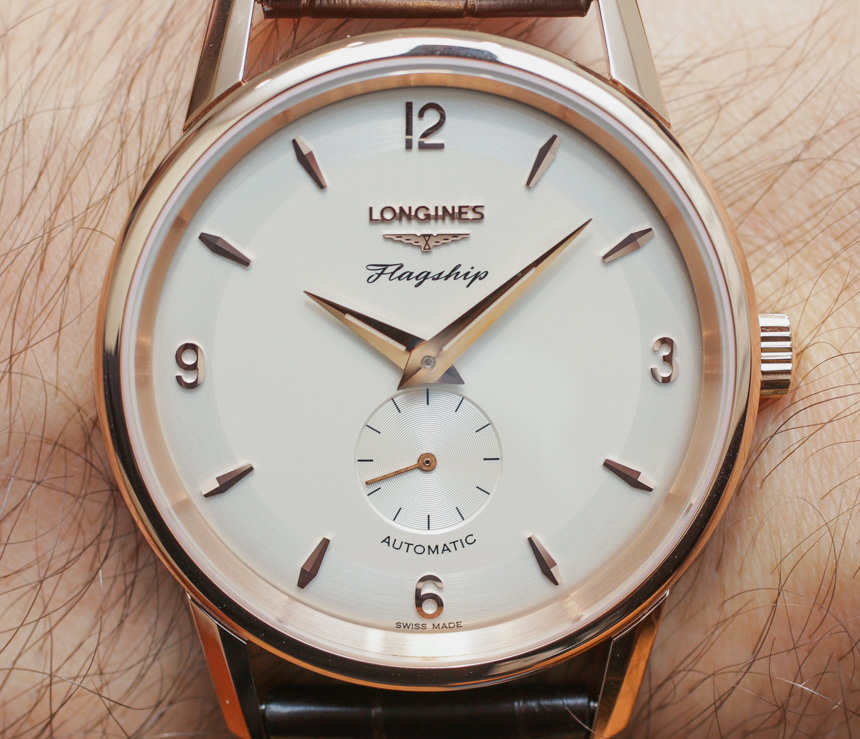 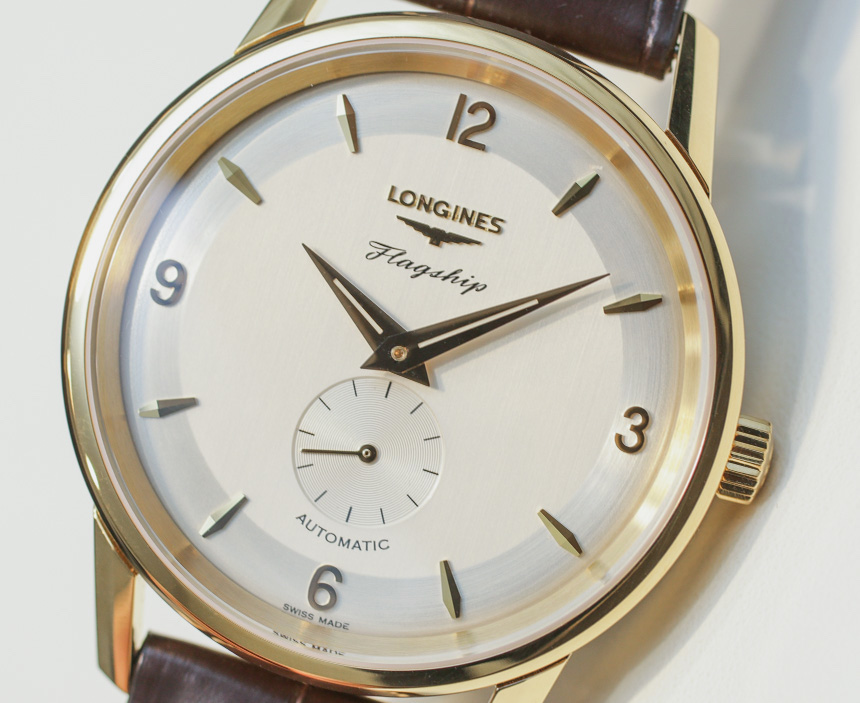 The dial is perhaps my favorite part of the whole watch and a study in applied markers. It is a silvered, brushed and convex dial with markers that give the entire thing a two-tone look. I wouldn’t blame you if you were hit with a blast of nostalgia looking at the dial. The applied markers are either yellow gold plated for the yellow gold case or rose gold plated for the other case options. There are four Arabic markers at 3, 6, 9 and 12 and faceted arrowheads at the other 8 hour positions. I like how even the logo on the dial is applied, with the word Flagship printed in a stylized hand under the applied logo. 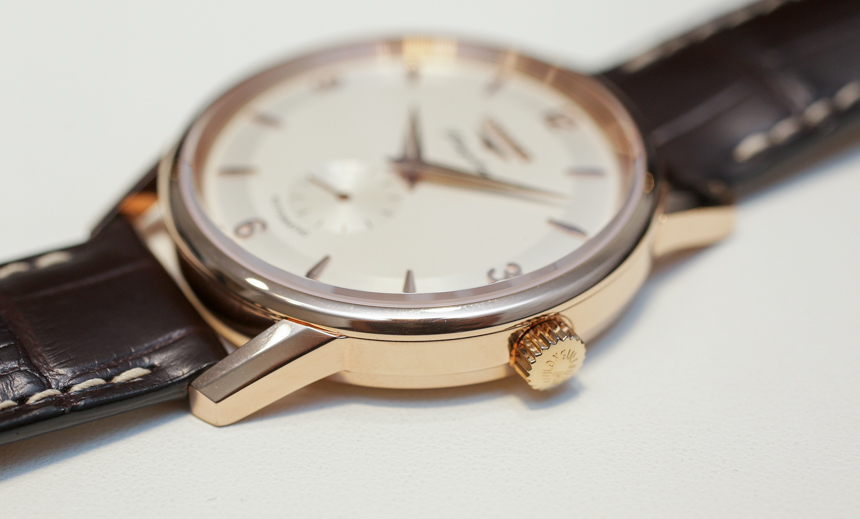 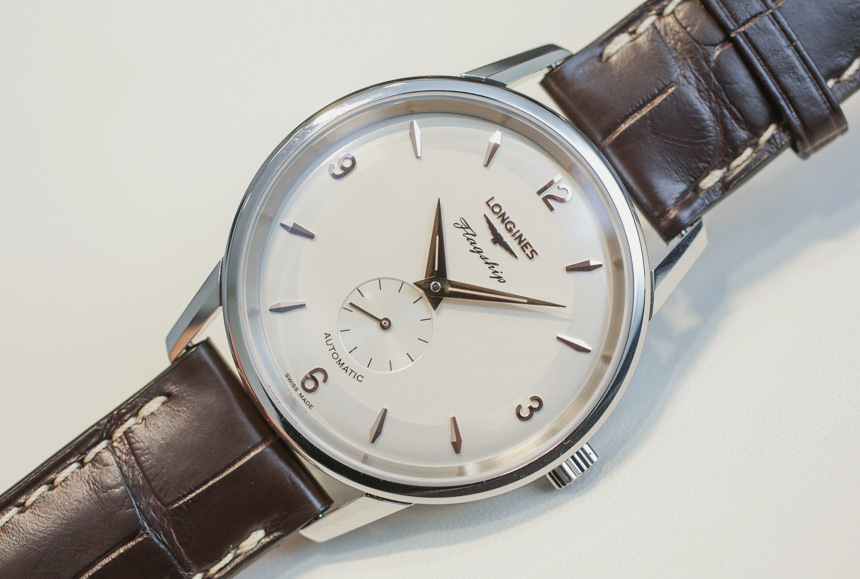 The seconds sub dial is textured with concentric circles and offers a nice visual point of interest when compared with the brushed main dial. The faceted dauphine hands and baton seconds are also plated yellow gold or rose gold as appropriate. As I mentioned earlier, I do hold a bias here so while I may be head over heels for the dial, I can definitely see that some watch enthusiasts may find it a bit plain in real life and lacking in depth. 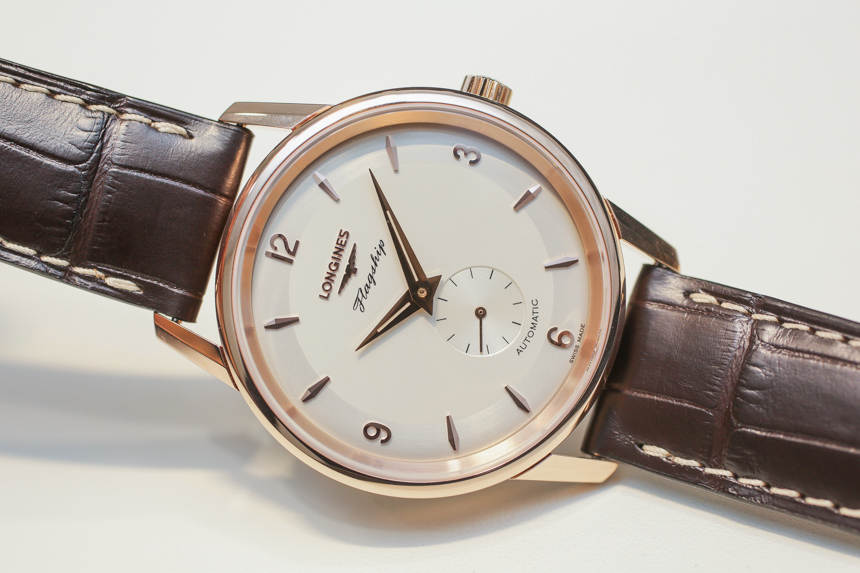 I like how Longines decided to not incorporate a date wheel and think that would’ve detracted from the appeal of the whole watch. Not to mention it would’ve not been true to the original. If I had a complaint about the dial, it would be the word ‘Automatic’ printed along the lower boundary of the sub-dial but that’s just me nitpicking. On the wrist, the watch is quite comfortable to wear thanks to the contemporary case size and long lugs. As a dress watch it does a good job of being able to slip under the cuffs and remain inconspicuous for the most part. When it does make an appearance, it looks dignified and refined. 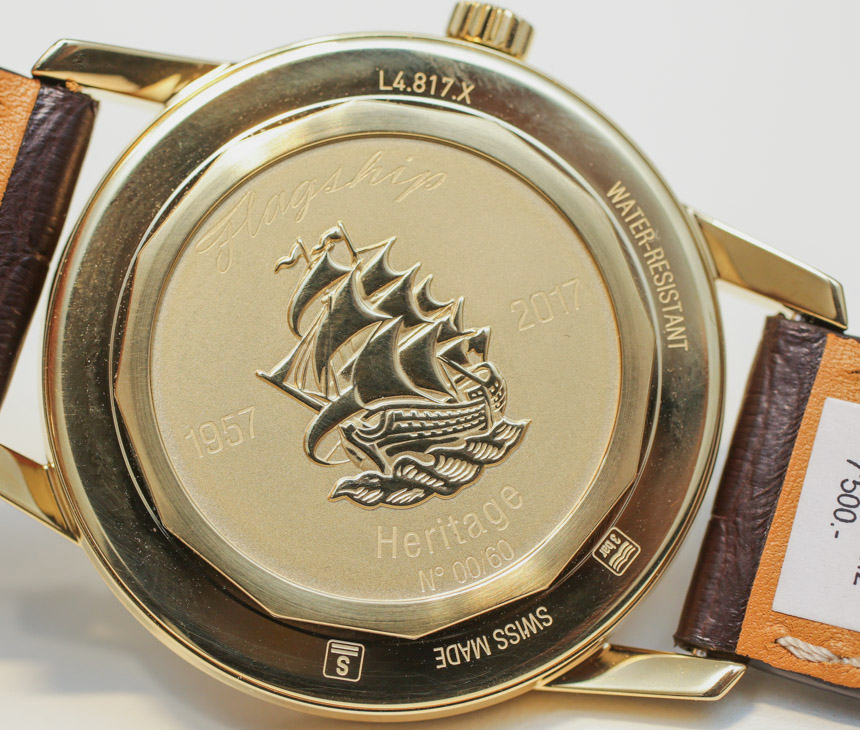 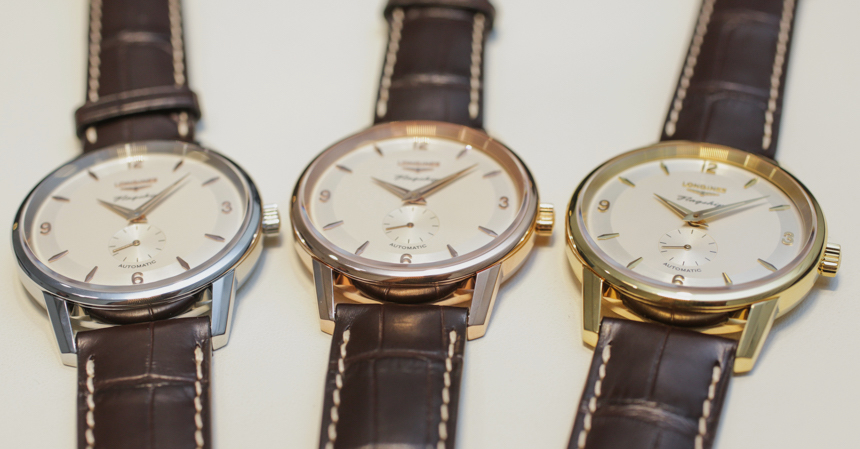 The Longines Flagship Heritage is powered by the Longines caliber L609 which is essentially an ETA 2892. This is generally a considered a step up from the ubiquitous ETA 2824 with more reliable and accurate timekeeping capabilities. Spec-wise it is similar to most modern movements with a 42 hour power reserve and beating at 28,800bph. Dress watches in general are rarely about showing off highly finished movements or haute horologerie watchmaking skills, so the choice of movement makes sense here and gives the watch a welcome feeling of robustness and dependability. 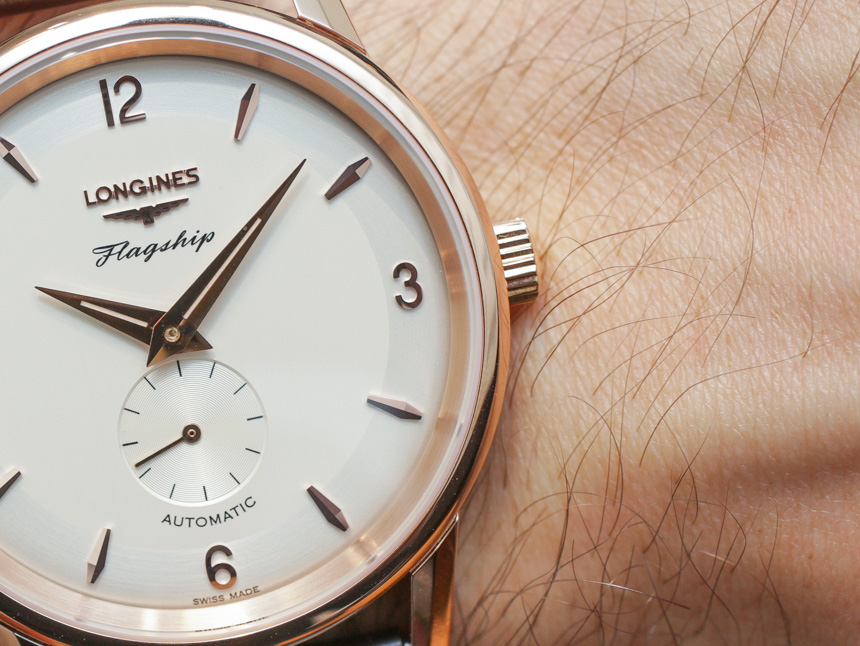 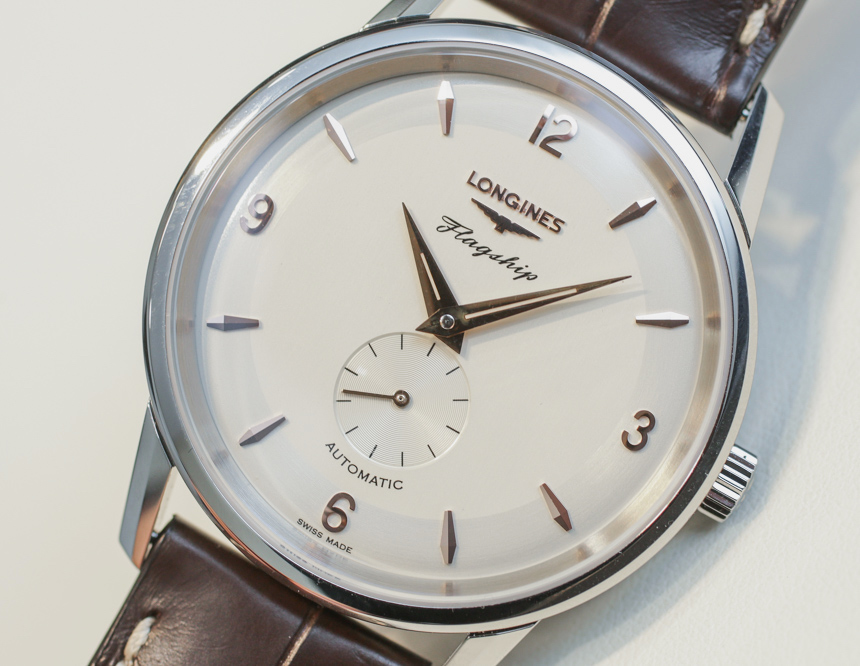 The Longines Flagship heritage takes vintage inspiration to an extreme that may prove too much for some, but I think it works very well. The use of gold plating and a sensible movement has kept prices relatively reasonable – compared to other limited edition vintage reissues we’ve seen this year. The steel variant is unsurprisingly limited to 1,957 pieces, with the gold variants being limited to 60 pieces each. The Longines Flagship Heritage 60th Anniversary ships on a brown alligator leather strap with contrast stitching for $2,000 for the steel model and $8,000 for the gold variants. longines.com