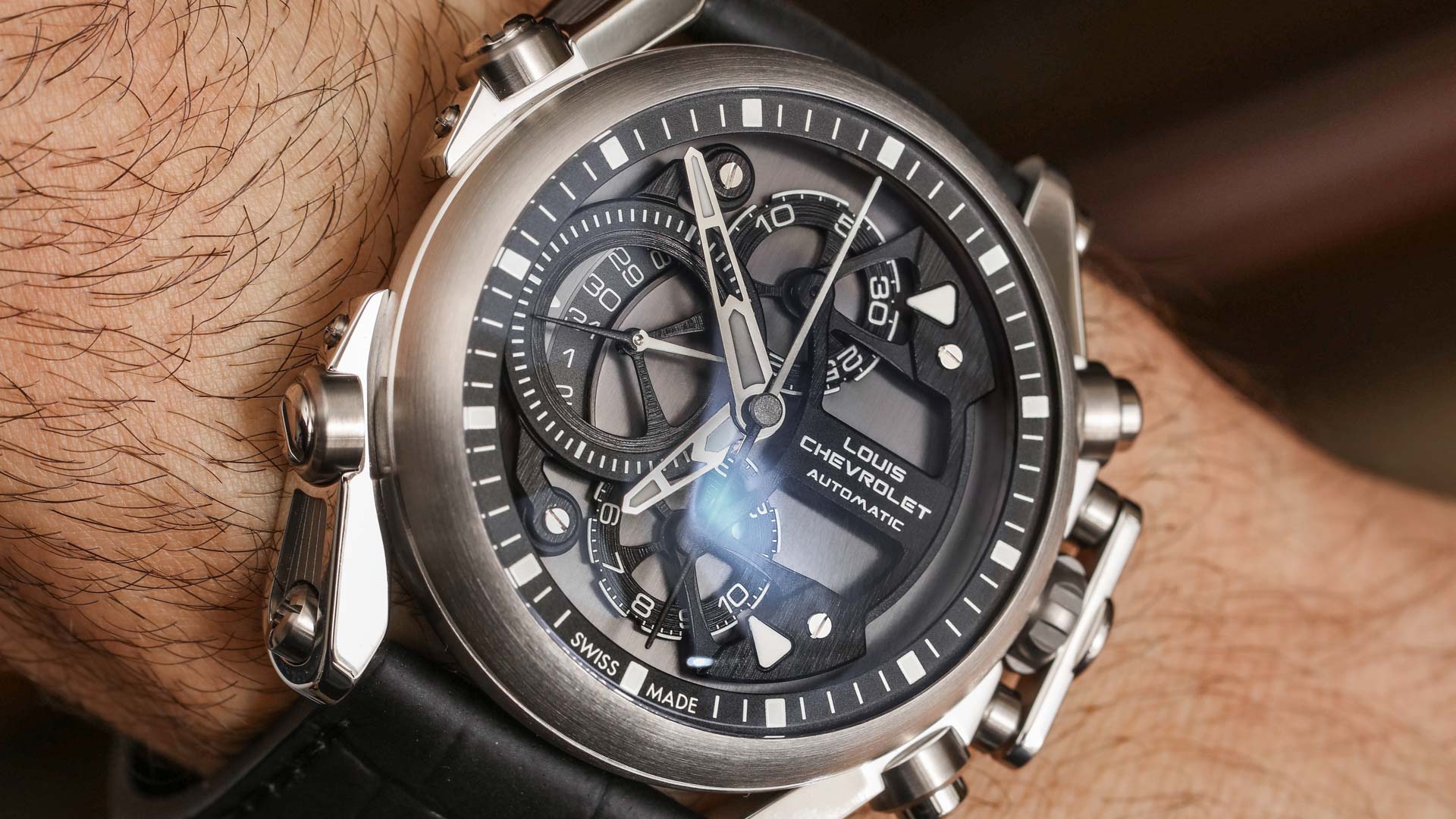 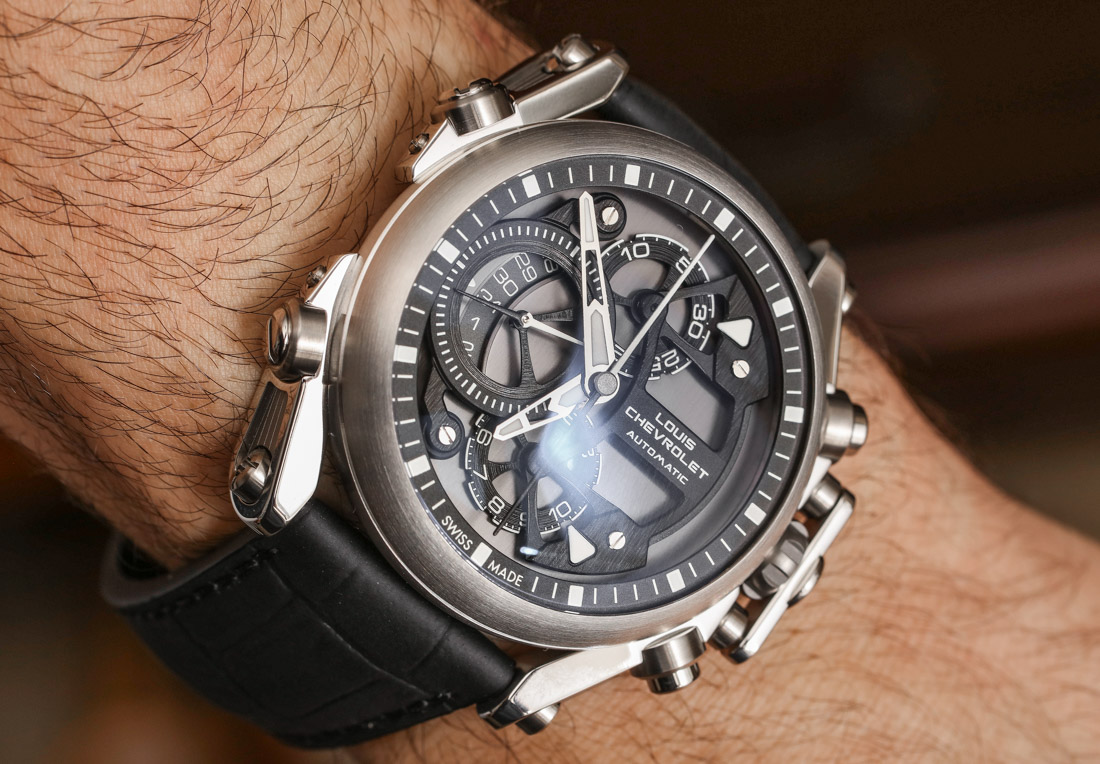 I was pleased to see originality in the timepiece world met with abundant compliments. This more or less sums up my positive experience with Louis Chevrolet’s still new Chrono-Tour watch. Specifically, I wore the Louis Chevrolet Chrono-Tour Classic model – which only happens to be “classic” in the sense that it uses more understated black and white colors as part of its personality. This is in contrast to other variations of the watch such as the Chrono-Tour Fashion. If you can ignore Louis Chevrolet’s lackluster presentation for these new watches in their marketing materials, you will have a very satisfying, reasonably-priced, well-made, and interesting timepiece to enjoy.

Let me first talk about my criticisms because even though they aren’t mostly related to the product itself, they will have serious implications for how successful these watches are. A simple way of saying this is that the Chrono-Tour watch is a really cool product for those with the confidence to look past a brand that they have probably not heard of, introducing a project that they don’t really explain very well in regard to where it came from or how it fits into their brand. It is as though Louis Chevrolet was handed this product, got excited about it, but didn’t do too much else to explain to anyone where the watch came from or how it fits in with the brand. 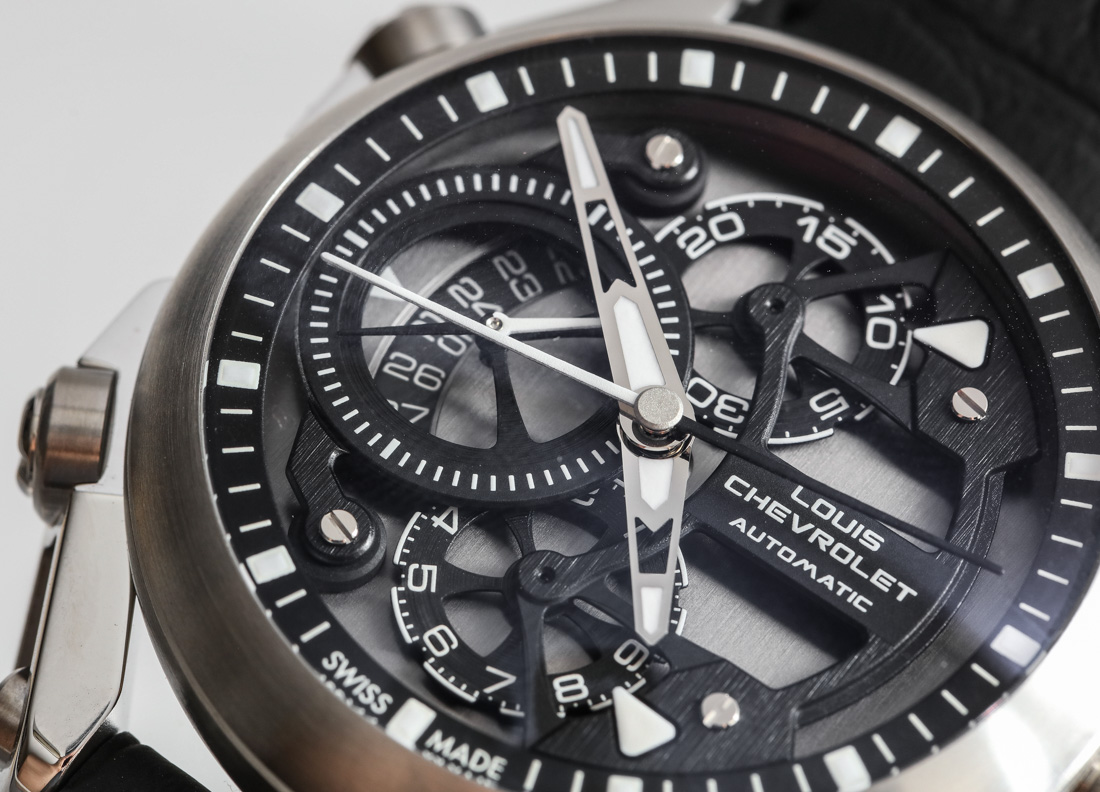 I recall my first meeting with Louis Chevrolet watches almost a decade ago at a small watch show in Switzerland. I was keen to learn that the Louis Chevrolet they were referring to was the same that is the name behind the major American automobile company. More so that Chevrolet cars worked with the Louis Chevrolet brand (at least lightly) to help promote their shared interest on Mr. Louis Chevrolet, who was a Swiss immigrant who came to America and was a major force behind early automobile racing as well as the formation of the automotive industry. 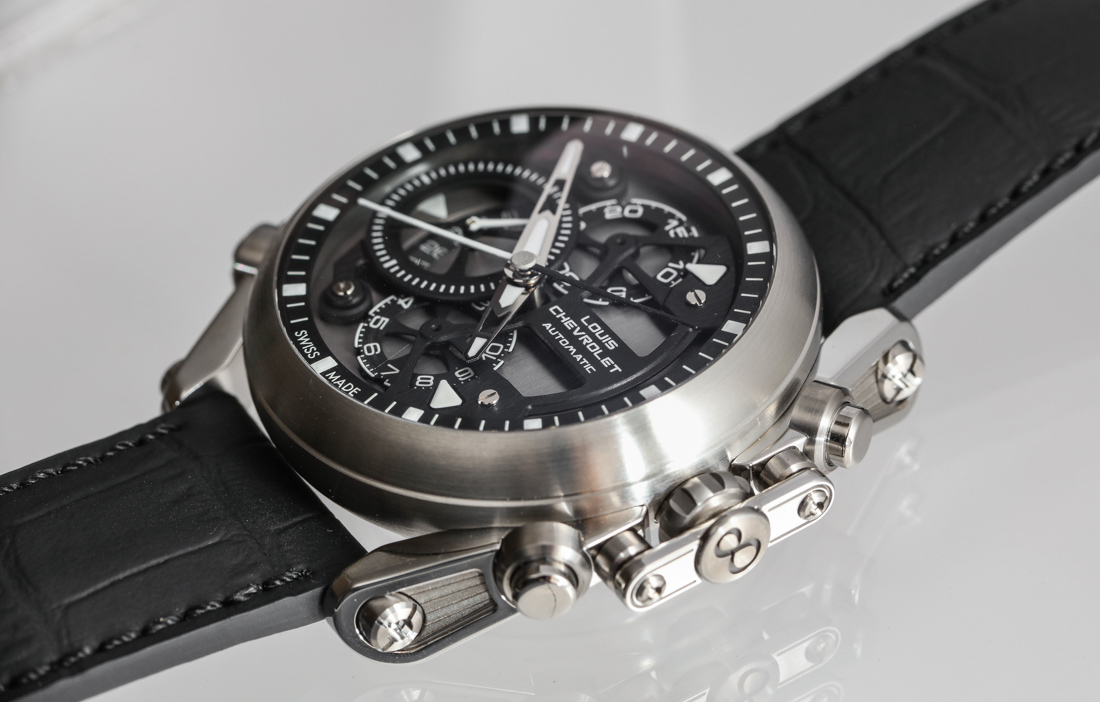 Back when I first got to know Louis Chevrolet the brand was a lot more “classic” in the traditional sense – even though there was a clear “forward-looking” sense to their product designs. Though with a major emphasis on the number “8” (it is even included in the crown of the watch), I was under the impression that their main goal was to sell to Chinese consumers (“8” as a word has traditionally been associated with watches intended for Chinese-speaking buyers because it is also the term for good fortune) either via tourism shopping in Europe or directly in China and surrounding places. That usually implies that a company has chosen to direct their efforts on that particular part of the market – I don’t even know if Louis Chevrolet watches were available for official purchase in North America. In any event, communication with Louis Chevrolet went dark for a few years – until recently. 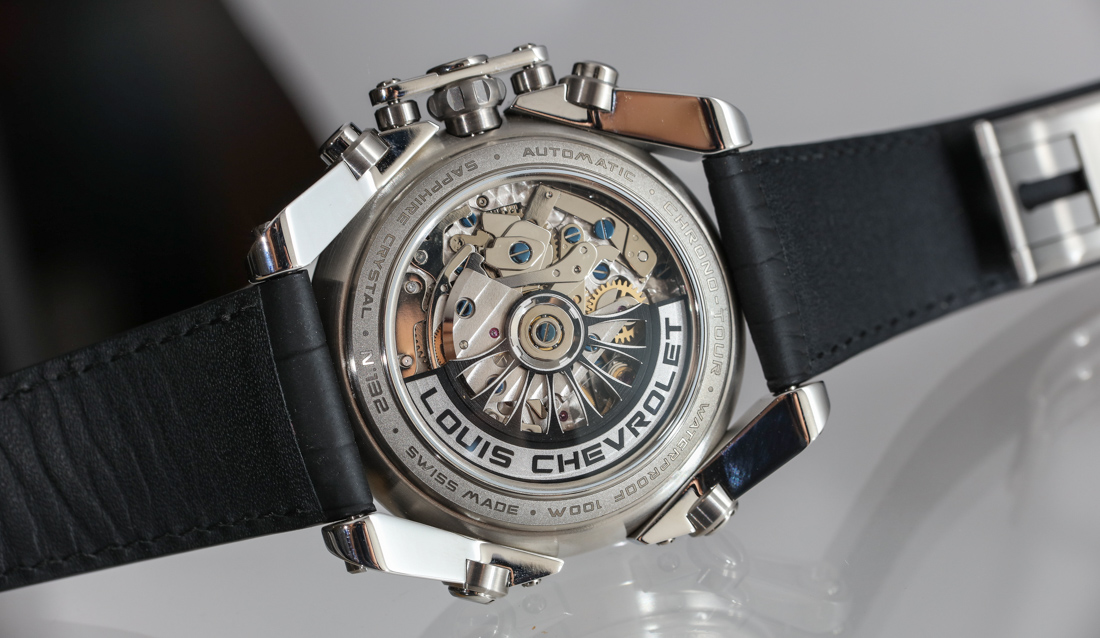 I believe that Louis Chevrolet is under new management and with that comes a lot of welcome changes for brands trying to compete in a digital world. What remains positive is a dedication to a product that collectors tend to expect from European watch brands. Other than that, Louis Chevrolet seems to have been totally reformed with the introduction of new products, modern (reasonable) pricing, e-commerce, and everything that comes with the reality that many brands like Louis Chevrolet will need to sell directly to consumers in order to have a bright future. 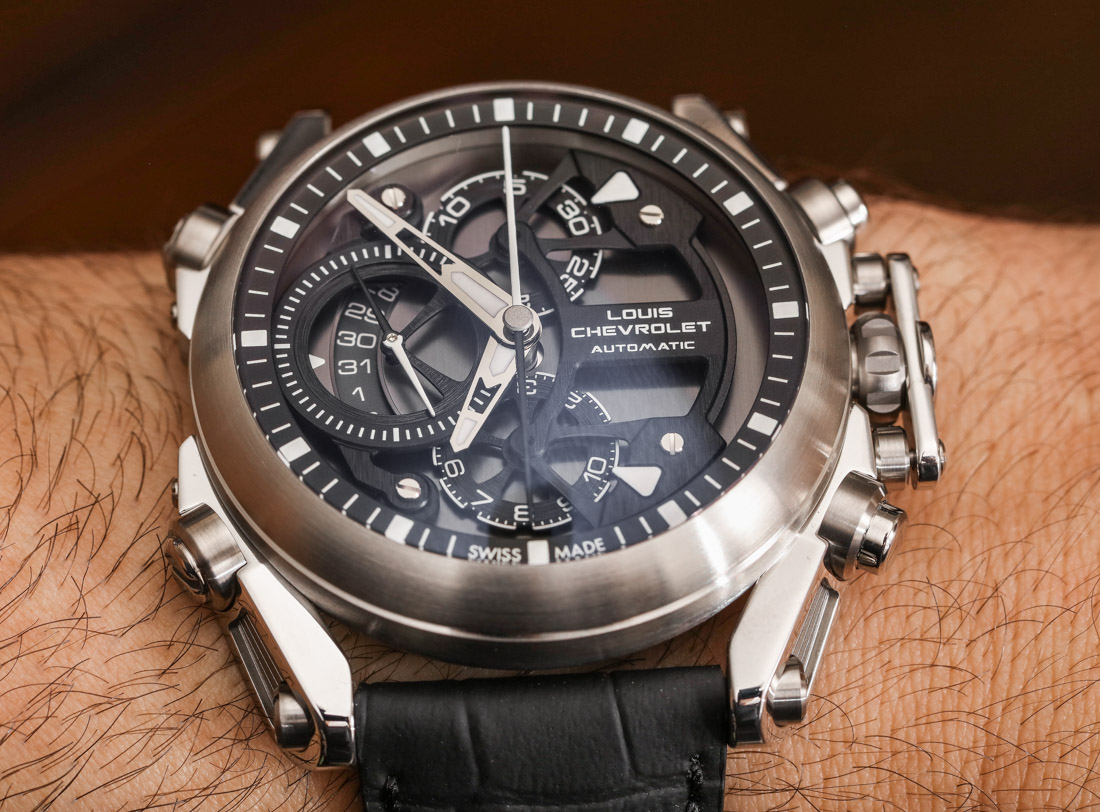 Enter the Chrono-Tour timepiece, which will most likely appeal to open-minded watch collectors who for years have been painfully teased by modern looking “wild” timepieces they could never afford. Are you part of the group of people who have lusted after Urwerk, MB&F, and similar horological artistic creations that are out of your monetary reach? Products like the Louis Chevrolet can offer a real alternative in terms of the emotion you are trying to present on your wrist – all with a price around $2,000 that I think is entirely perfect for the market right now. 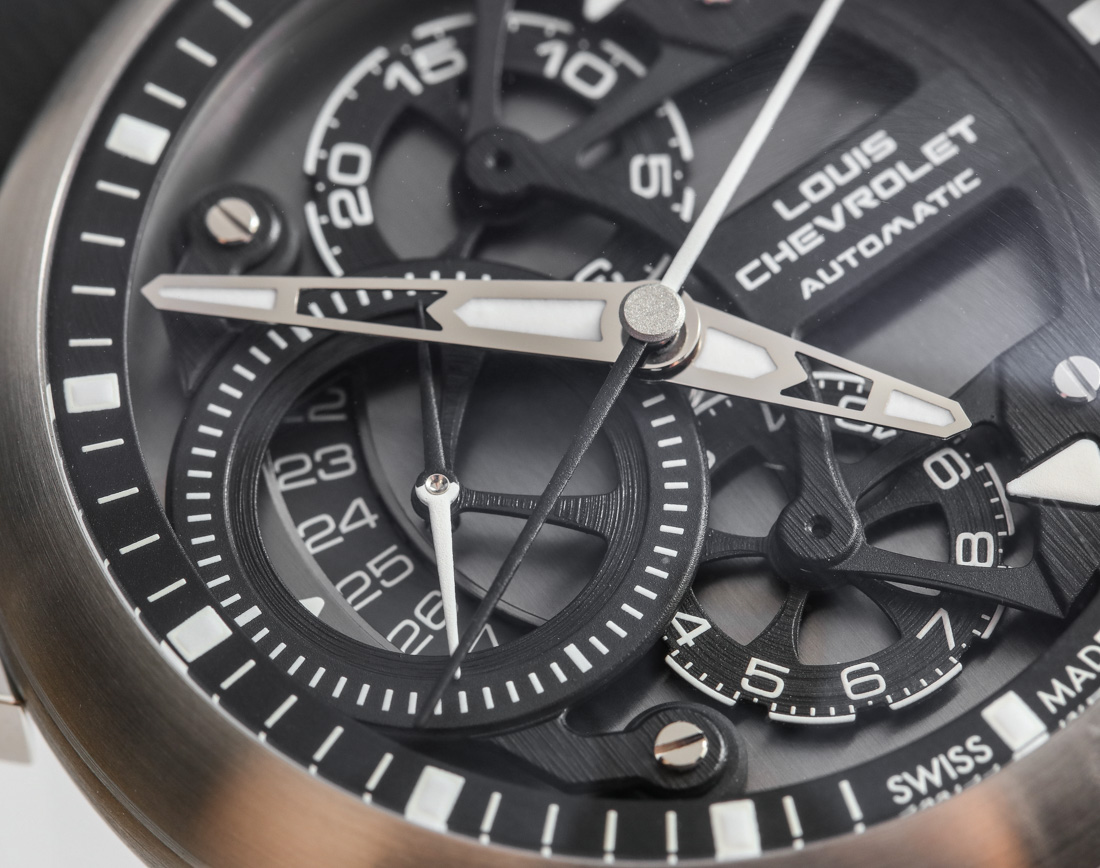 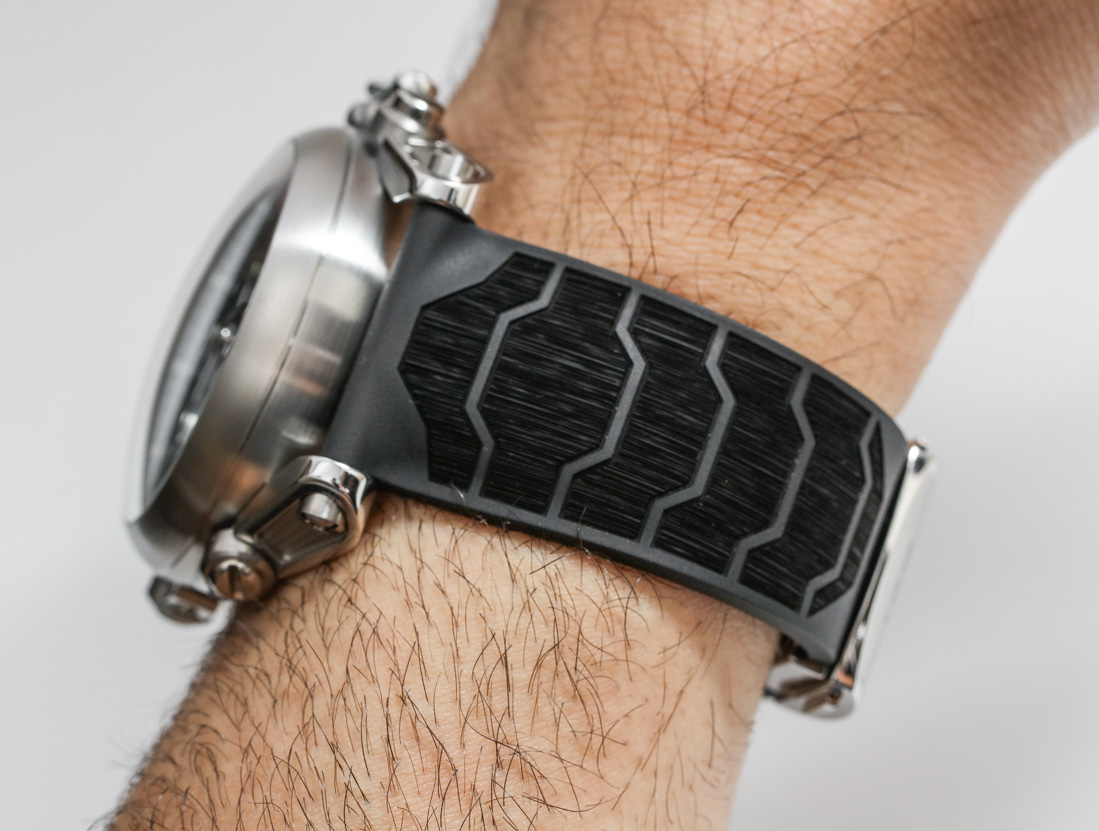 I said earlier that Louis Chevrolet doesn’t communicate well about the Chrono-Tour watch. Their website no doubt mentions the watch plenty, but there is no story or explanation to go with it. The person who designed it clearly loves watches but none of that is communicated in the text on the website and it isn’t even clear if Louis Chevrolet themselves know what to make of it. The best they can do is suggest that it is “inspired by beautiful car mechanics” without going into any more detail. They don’t even really try to tie the model to the brand personality or history. There is no discussion of what the design means, what they are hoping to do with it, or why it is novel. It takes a seasoned enthusiast like myself to check out the watch and say that this is a good product but also that this brand really owes this product a better presentation because if they do so, a lot more people will be interested in one.

If Louis Chevrolet put together a fancy marketing and advertising campaign around the Chrono-Tour, I can easily see it having success far outside of the traditional “watch nerd” market. Nothing wrong with that market (I am included in it), but these days watch brands can’t always survive merely on watch nerd consumer interest. Watch nerds need to be the foundation that makes the product appealing to consumers, but their enthusiasm needs to be translated to more lay consumers. In any event, Louis Chevrolet has a good product that I feel will pay dividends to them if they further invest in it. 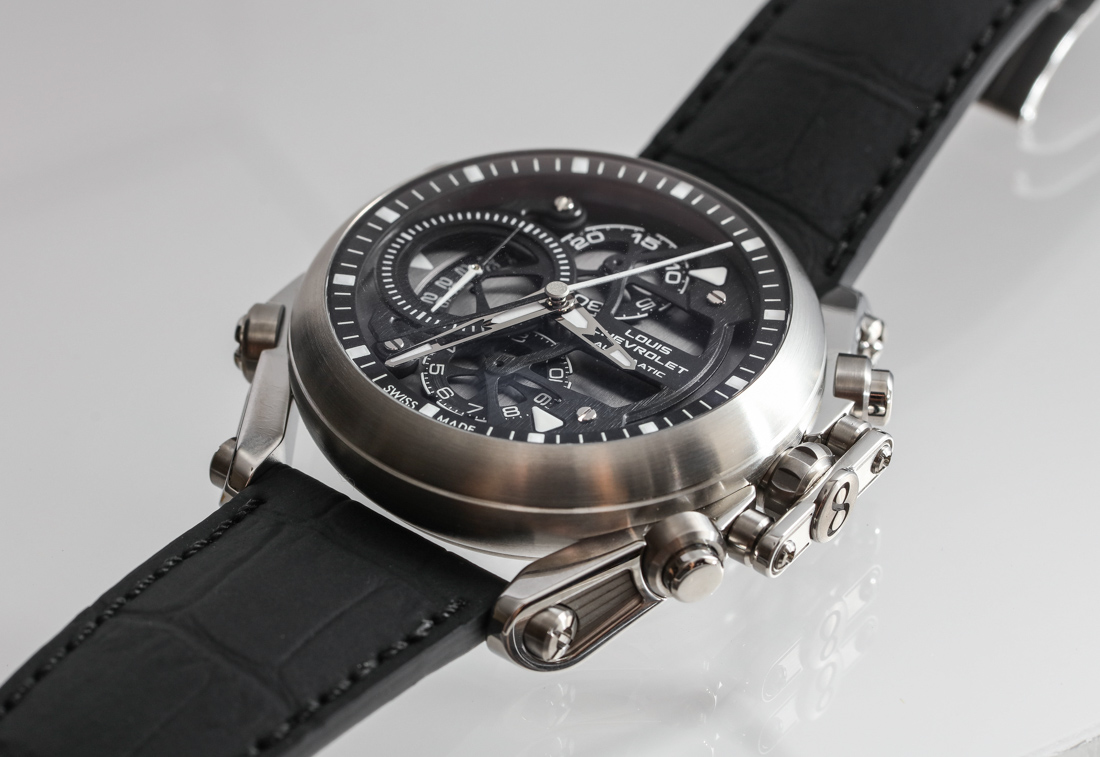 Let’s get into the product itself – which as I said earlier received abundant compliments from conservative and liberal-minded collectors alike. This was somewhat surprising because I don’t know all of my colleagues to be as “open-minded” as me when it comes to more original wristwatch forms. The Chrono-Tour is most certainly an original form – even though it clearly has inspirations from a lot of existing watch design elements. 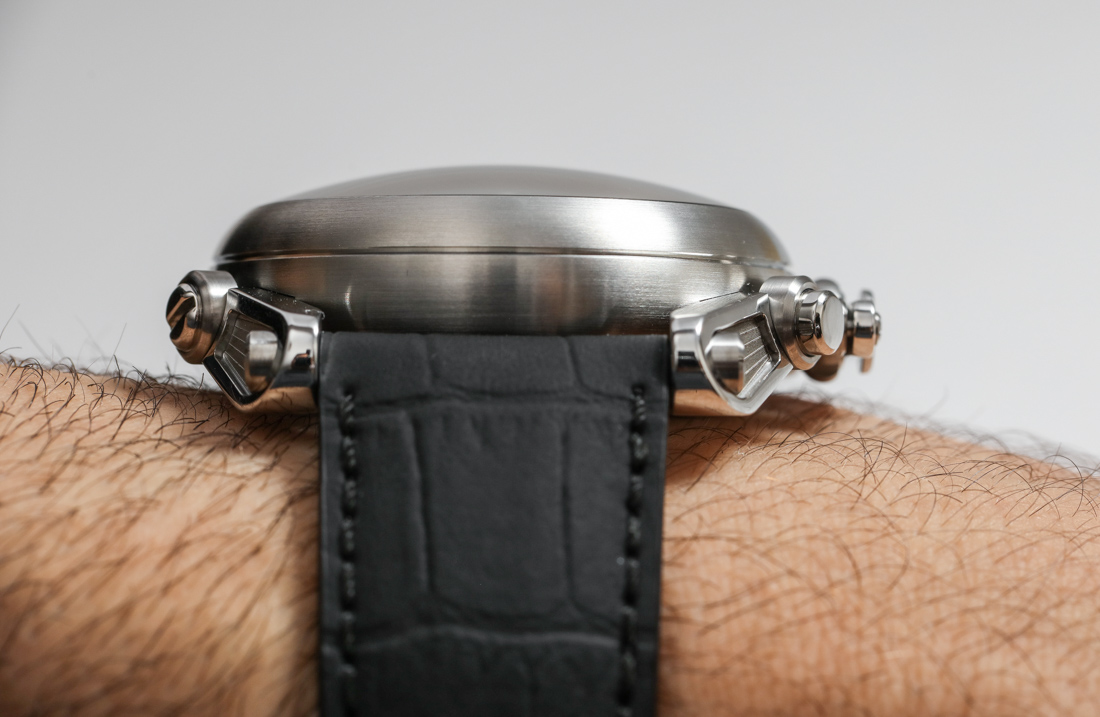 The watch case itself is 44mm wide in steel. 44mm is a modest term because it only includes the inner case and not the intricate lug structure which on the right side of the case is integrated with the chronograph pushers and crown, which together pushes the width of the watch to about 50mm wide. The lug-to-lug distance is about 52mm. The inner case is very much Ikepod-inspired while the lugs seem to suggest a more mechanical and edgy feel. I think this element does a nice job of making the Chrono-Tour design look more distinctive, and helps give the watch a more youthful, masculine personality. Interestingly enough the case (which is also water resistant to 100m) is rather comfortable to wear. You do need it to be relatively snug on the wrist, but I appreciated the ergonomics which are not readily apparent given the overall design.