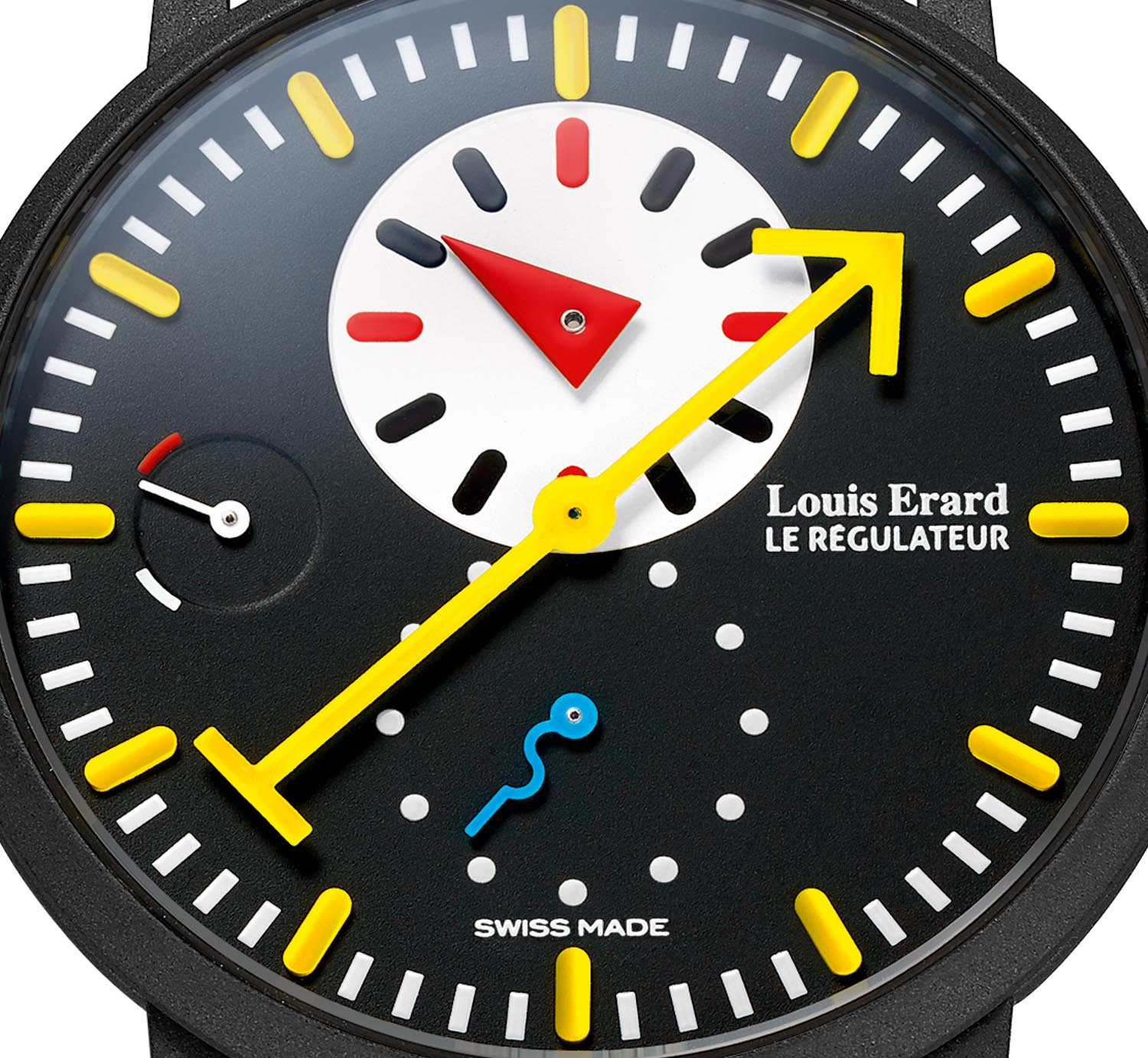 The legendary watchmaker and designer Alain Silberstein is back in the form of a two-piece limited edition he designed for Swiss watch brand Louis Erard. This true collaboration involved Louis Erard giving totally free dominion (“carte blanche,” as they say) to Alain Silberstein to take its popular regulator-style watch and design it with his DNA in mind. The result is the “LExAS” (Louis Erard x Alain Silberstein) Excellence Regulator watch. Later in the article, I have a short interview with Mr. Silberstein himself.

What else is interesting is that the creative direction behind the project comes from Manuel Emch. The former Jaquet Droz and Romain Jerome CEO is now an independent consultant… and Louis Erard seems to be a major client. Having worked with Alain Silberstein in the past at Romain Jerome, and clearly being aware of Mr. Silberstein’s appeal with watch enthusiasts, he put together a very intelligent plan for the brand. In general, it seems that the once-sleepy Louis Erard (at least when it came to its lack of presence in the United States) has been rejuvenated lately, and we can expect interesting things from the brand. If you look at some of the watches on the website, you can even start to see a lot of Jaquet Droz aesthetic inspiration. I don’t think this is a coincidence.

Why now for a brand like Louis Erard? I think it has to do with the large volume of available talent in the watch industry (the larger group brands have been experiencing an ongoing “talent flight” for a few years now) and opportunities in the retail space. While the economics of the larger watch industry is a sort of disaster because of lowered growth outlooks by brands held by big groups, the consumer world is still greatly interested in luxury watches. They just demand more sophisticated marketing relationships with brands and cleaner distribution channels. The irony is that as established/historic as the watch industry is, it doesn’t collectively seem to agree on how to make an honest buck these days. 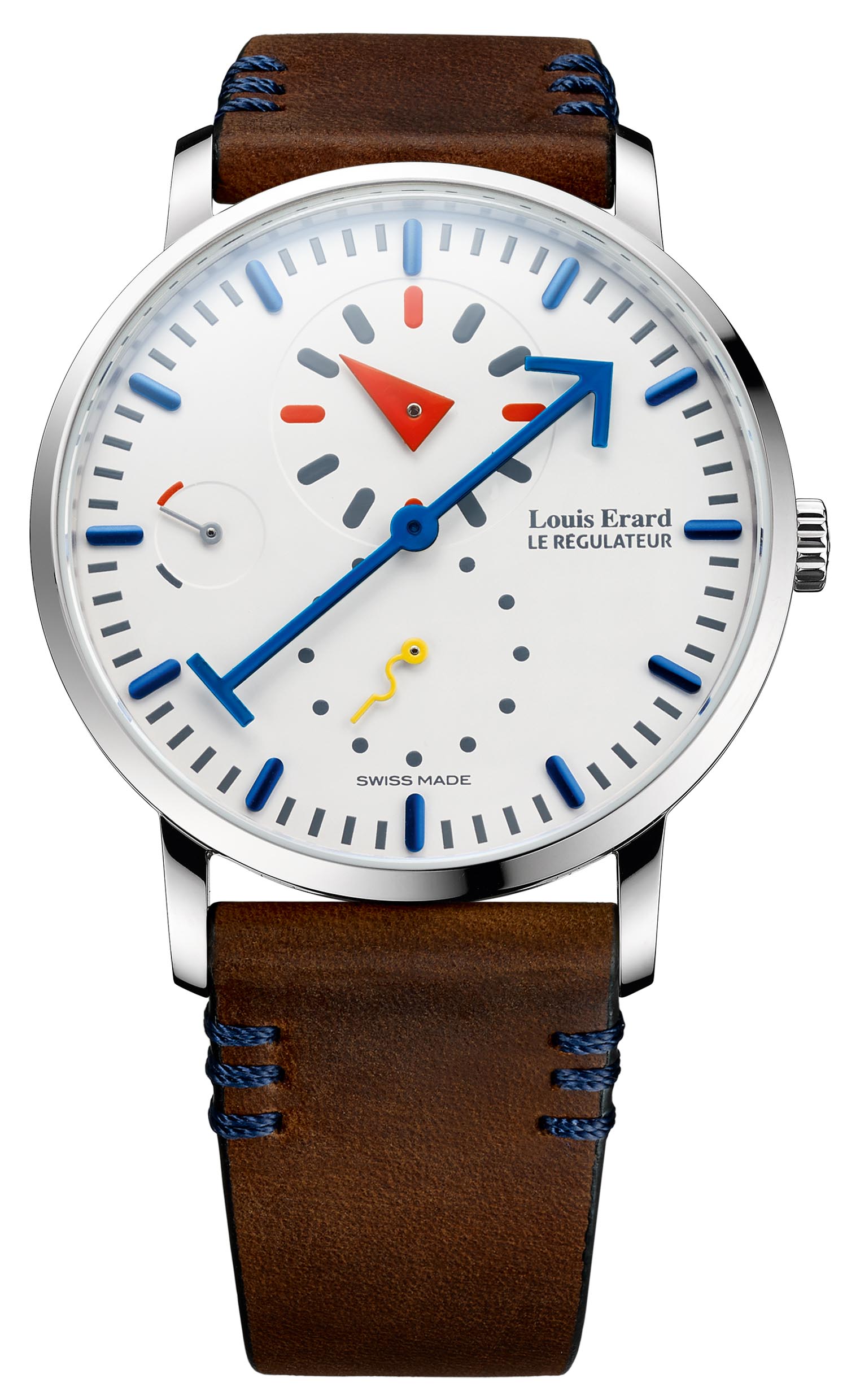 Now back to Louis Erard and Alain Silberstein. I’ve not yet seen the LExAS Excellence Regulator watch, but the brand has assured aBlogtoWatch that it will be among the first to offer the audience a hands-on experience. Alain Silberstein used to have his own brand, but he also did some collaborations, as I said (his most popular high-end collaborations were the few collections he did with MB&F). Most of his work, however, falls within his brand, and his more contemporary watches were all pretty elaborate going up to tourbillons. Alain Silberstein is, however, a playful designer who takes his French-school interpretation of German Bauhaus industrial design and combines it with what I can refer to as a toy-themed aesthetic. Silberstein’s formative and most prolific years as a designer were in Paris. To me, his work always seems to ask the question, “Will it perform well as a tool and would a child like it?” Doing that is often easier said than done, but his legacy of results speaks for itself.

The Louis Erard Alain Silberstein Excellence Regulator will actually be far more affordable than most of the other watches out there with the Alain Silberstein name on it (unless you go back to his watches from the 1980s or 1990s that were quartz). The watches aren’t cheap, but at around $3,000 and being produced as two sets of 178 pieces (each), I think the price-to-value ratio here is pretty darn acceptable. 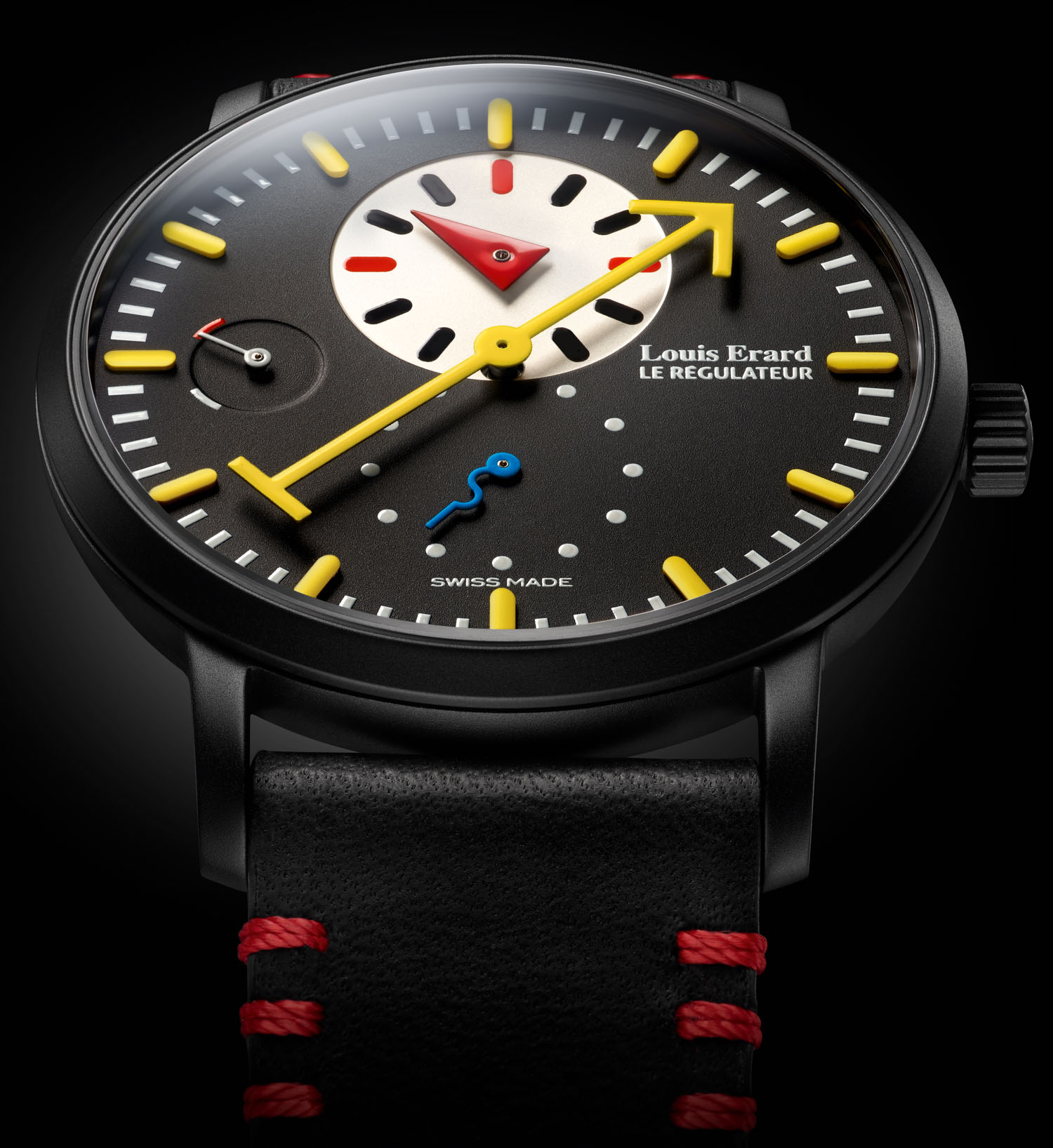 The watches themselves are also very sensible and designed to appeal to most wrists. The cases are in steel (natural or PVD-coated black) and 40mm-wide (water resistant to 50 meters). Alain Silberstein’s name is not on the dial, but rather placed on the rear of the case; I think this was the correct thing to do from a design and branding perspective. The two available dial colors (one per case) include black and silver. Clearly, the black dial will be more immediately associated with the Silberstein look, but both are well-done and very legible. We see a return to the triangle arrow hour hand, pointer arrow minute hand, and signature “squiggly” seconds hand. The dials also include a power-reserve indicator, which is attractively minimalist.

The white (opaline silver) dial is the dressier of the two and a bit more mainstream for sure. It still has loads of Silberstein DNA, but is what I would call the more conservative of the two LExAS watch models. I love the applied hour markers and the apparent depth of the dials. I will wait until I wear the watches for final judgment, but I think these will be really satisfying on the wrist. In an ideal world, you’d be able to put the Louis Erard Alain Silberstein Regulator alongside the average late-model Alain Silberstein brand watch, and they would seem “consistent” together.

Powering the watch is a base Swiss-made ETA movement with a regulator module made especially for Louis Erard. The based movement is the thin, manually wound Peseux 7001 that operates at 3Hz with about 42 hours of power reserve. The module is known as the Louis Erard RE9, and it adds the regulator style display, along with power-reserve indicator. Louis Erard is thus far silent on the thickness of the case. The 7001 is used because it is very thin, so, with the module, I don’t think the overall package needs to be that thick. Done incorrectly, a timepiece like this could easily be unattractively bulky on the wrist. As rendered, I have a pretty good feeling that it will be proportional-looking when worn. Matched to the cases are black or brown (or red, apparently) calf-leather straps with Alain Silberstein-designed stitching.

Before discussing the pricing of this limited edition LExAS watch set, I want to share my conversation with Alain Silberstein when I reached out to him recently. He talks a bit about the watches, of course, about his approach to watch design, generally, and contemporary watch industry business trends like collaborations. It is worth seeing what he had to say:

Ariel Adams (AA): Mr. Silberstein, I don’t know if you’ve noticed, but since you have been less involved in the watch industry, people have been asking about you. Now you are back with a very special collaboration, and fans of your work will have a lot to chat about. My question has a bit to do with your legacy, or at least how you perceive it. Looking back over your very accomplished career as a watch designer, what are you the proudest of doing and what do you feel your particular contribution to the watch industry has really been?

Alain Silberstein (AS): Artistic creation is a way of life, with good times and not so good times. Throughout this journey, I have had the opportunity to meet and work with people as passionate as me who have not hesitated to share their experience and know-how to enrich my projects.

It is this trust, this richness of human relationships, that still illuminates my creative approach today. In an increasingly harsh and individualistic world, dialogue and sharing are values to be preserved.

AA: With Louis Erard, you designed a regulator-style display. What are some of the particular challenges you face as a watch design when it comes to making an attractive and useful regulator-style timepiece, and what details do you hope fans notice in this collaboration watch?

AS: It was a real challenge, as I had never designed a regulator before. In a “classic” watch, we first read the time angle formed by the hour hand and the minute hand. In a second step, we will look for a more precise indication of the minutes displayed on the dial.

It was necessary to find the right balance between these two radically different ways of reading the passing of time.

AA: Be sentimental for a moment. What moments in the watch industry’s recent past, or simply your career, do you miss? When did you feel the most professionally satisfied and as though you were making the largest impact on wristwatch consumers?

AS: This will be my nostalgia sequence! I am a “Basel Messe” baby because I exhibited at the Basel Fair in 1987 for the first time. I was surprised and moved by the warm welcome of the international watchmaking family to the newcomer I was.

My watch creations come to life the day they are first worn. I sometimes dream that my watches send me a little message giving me news of them. Hence the importance of after-sales service: a watch, like a car, must be able to be regularly serviced, sometimes repaired.

I spent a lot of time organizing quality after-sales services, financing component stocks for more than ten years, etc. I am happy to see that my watches live well without me! 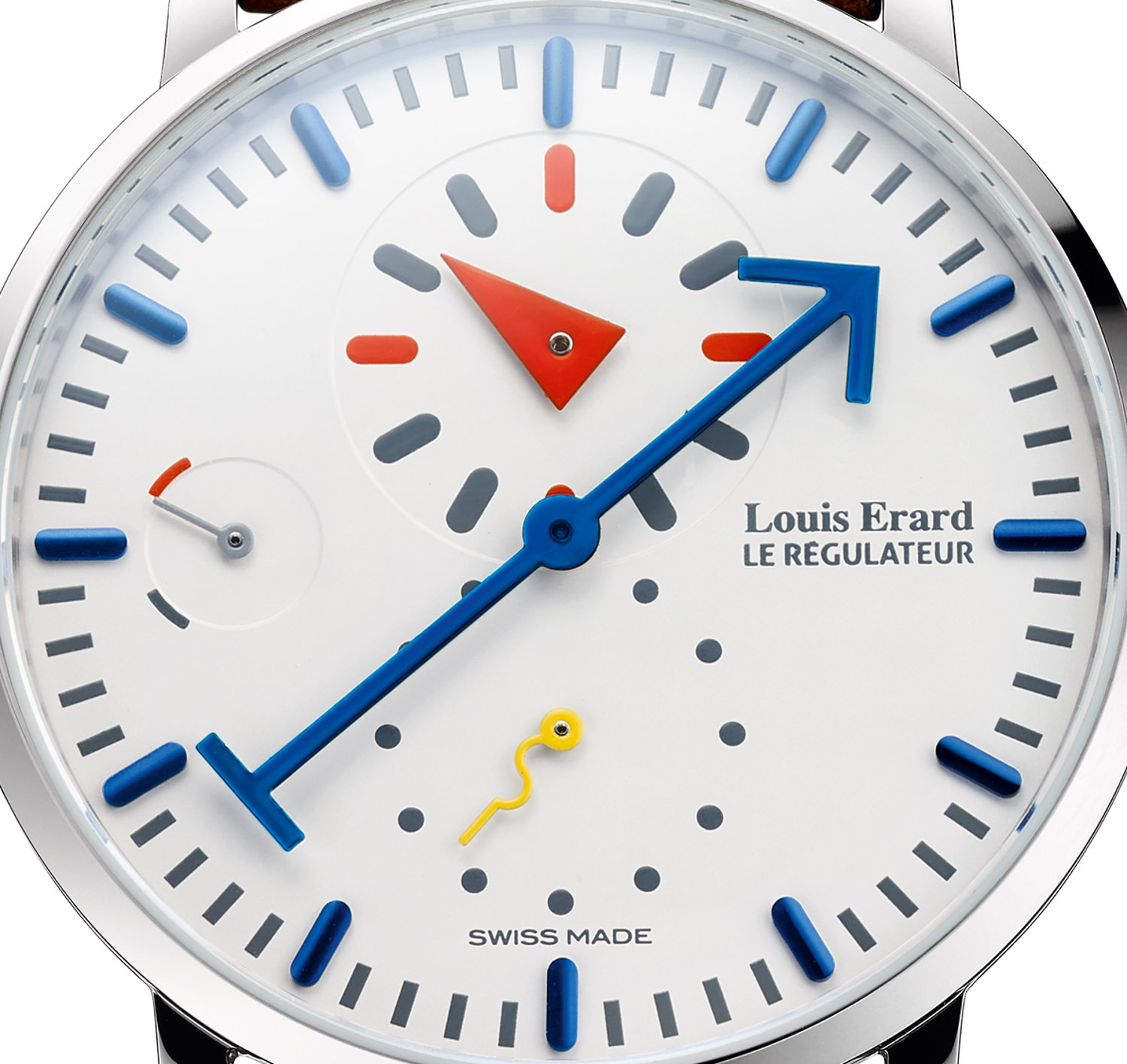 AA: The watch bears your signature look but not your name on the dial. Anyone who considers themselves a seasoned timepiece collector will immediately notice your aesthetic DNA, but novices to watch collecting will still need to understand your particular philosophy of watch design. I’ve always said you make instruments that should be as fun to use as toys — though you’d probably put it another way. How does Alain Silberstein himself describe his philosophy toward watch design?

AS: A quote from Picasso comes to mind to answer you: “In every child, there is an artist. The problem is how to remain an artist as you grow up.”

Nothing is more serious than a child who plays; his game has the spontaneity, freshness, freedom proper to childhood, without constraints. Adults, are we able to find that part of innocence that is always present in us? What if our ability to bring it to life in our creations was the trademark of artists and craftsmen?

As time goes by, financial, marketing, technical and other constraints become more and more simple challenges to be met in the great game of artistic creation.

AA: Designer + manufacturer collaborations are today increasingly popular across a large number of product categories. Wristwatches are just one area of fashion where additional emotion can be added to an otherwise great product that may lack the playfulness to attract consumer attention. As someone who has been doing collaborations since before it was popular, and as someone who has had your own brand, what do you think is a smart and sustainable future for designers and manufacturers to work together in order to leverage their mutual strengths? Offer some advice for both designers like you and manufacturers on how to do this effectively so that the resulting product is satisfying to consumers.

AS: Since time immemorial, young artists and craftsmen have enriched themselves by going to work for masters. Nothing is more enriching than talking to masters to enrich your creative vocabulary. I think of Svend Andersen who introduced me to the mysteries of mechanical complications and Michel Vermot who introduced me to the art of cloisonné enamel.

The collaborations I have had with MB&F, Romain Jerome, and now Louis Erard are, above all, stories of friendship and happiness. The joy of combining different talents and characters to create something unique.