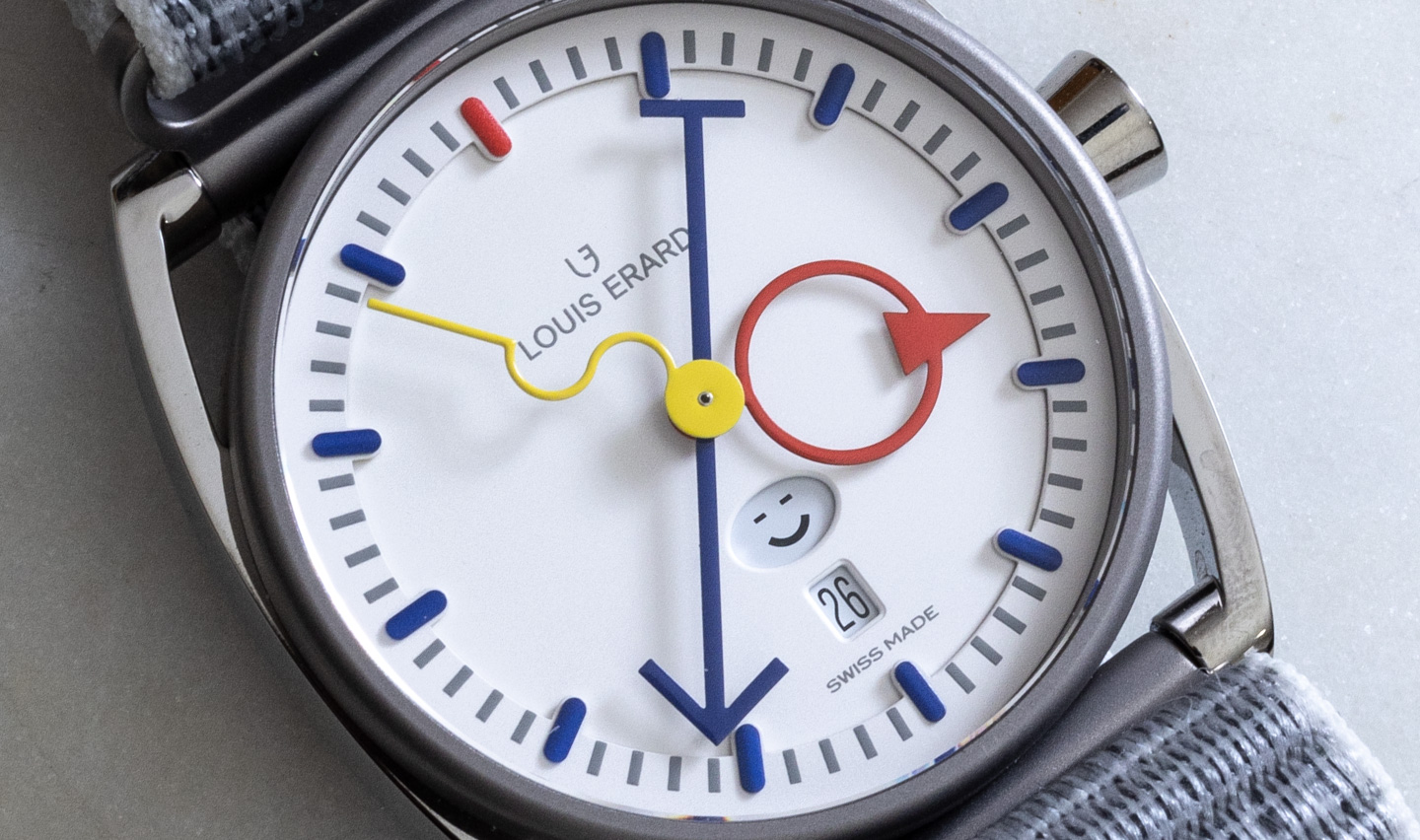 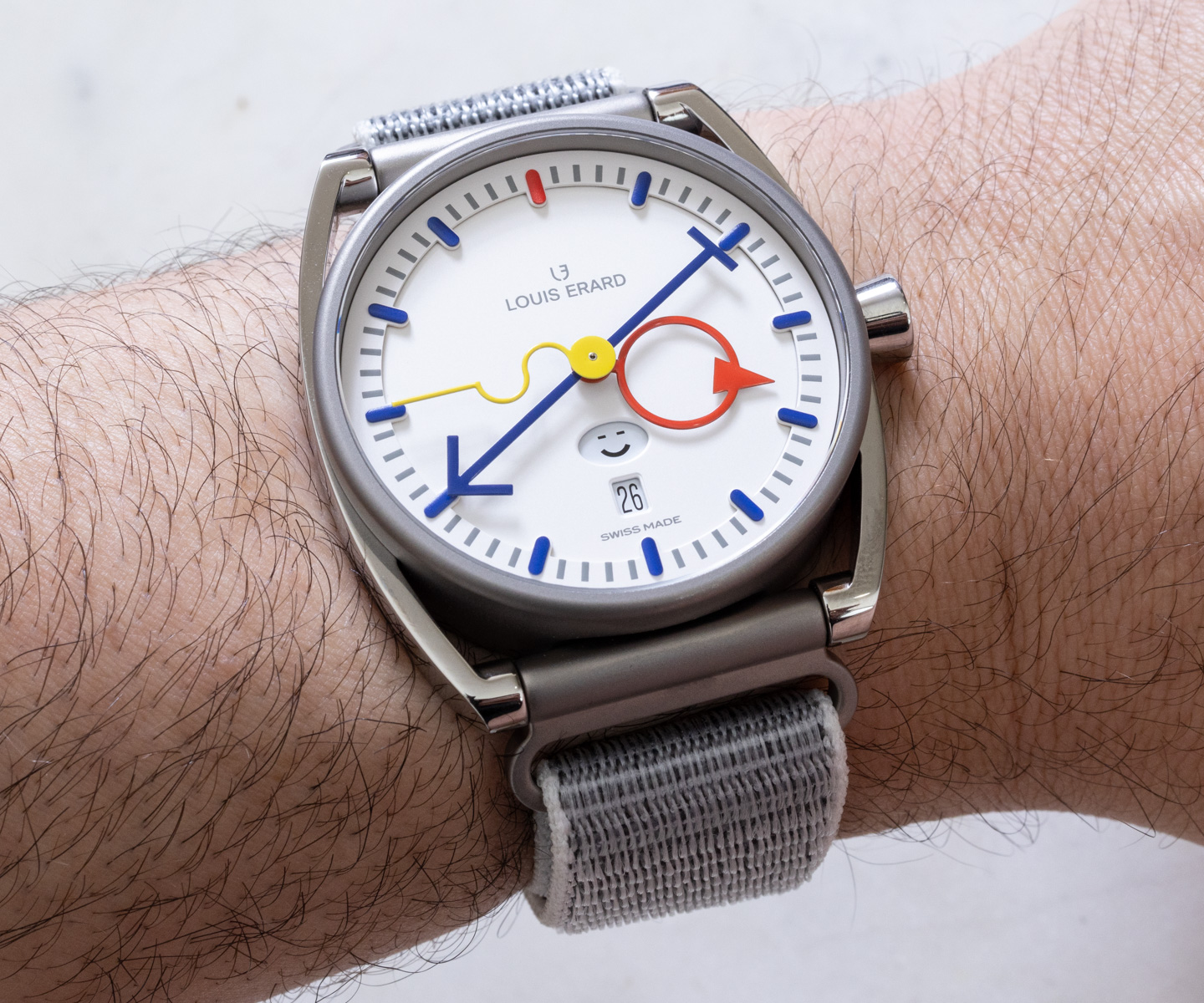 The relationship between watch maker Louis Erard and watch designer Alain Silberstein is a wonderful example of successful teamwork in today’s challenging luxury watch market. Alain Silberstein once had an interesting eponymous brand, but after it closed up, he went a bit underground for a while — many feared for good. When he re-emerged as a strong voice in the new watch community, it wasn’t as an entrepreneur of a new brand or his own, but as something a bit more traditional: a designer for hire. In 2022, aBlogtoWatch went hands-on with the first Louis Erard x Alain Silberstein Excellence Regulateur limited-edition watches here. The idea was simple. Louis Erard hired Alain Silberstein to design a new watch, which in this instance was dual-branded in order to help benefit from Mr. Silberstein’s good name. The watch did well because it was a true evocation of Alain Silberstein’s DNA in the style and price of a Louis Erard. Now, the relationship continues and represents a real family of watches.

After the Excellence Regulateur limited-edition watch project, Louis Erard debuted a new case design that is currently used for a variety of Louis Erard x Alain Silberstein watches. aBlogtoWatch initially went hands-on with this collection in the form of the “Triptych,” which was a set of the first three watches with black dials. Indeed, you could purchase each of the three watches separately, but they also came as a set. Then Louis Erard came out with two white dialed versions which includes this La Semaine Blanche Louis Erard x Alain Silberstein reference 75357TT01.BTT83. No monopusher chronograph version this time, but Louis Erard did make it possible for consumers to purchase both “Blanche” white dial models as a set called the Diptyque. In addition to the Le Regulateur Blanc Louis Erard x Alain Silberstein (don’t ask me why, despite having the same colors, one dial is “Blanc” and one dial is “Blanche”) with the regulator-style dial, the La Semaine (“the week”) is the other lovely white-dial model and is also worth a good look. Both watches, despite the different movements, are the same price. 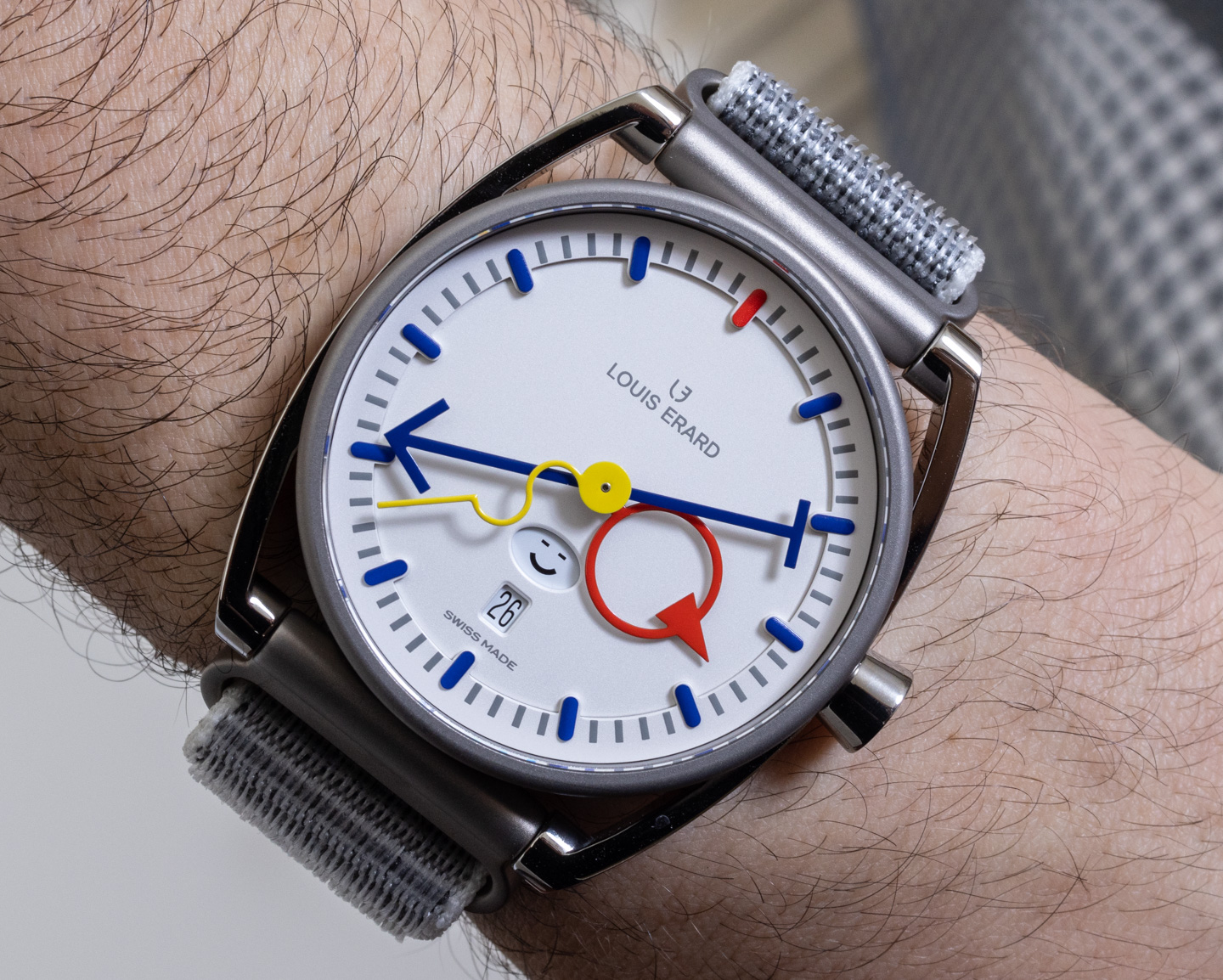 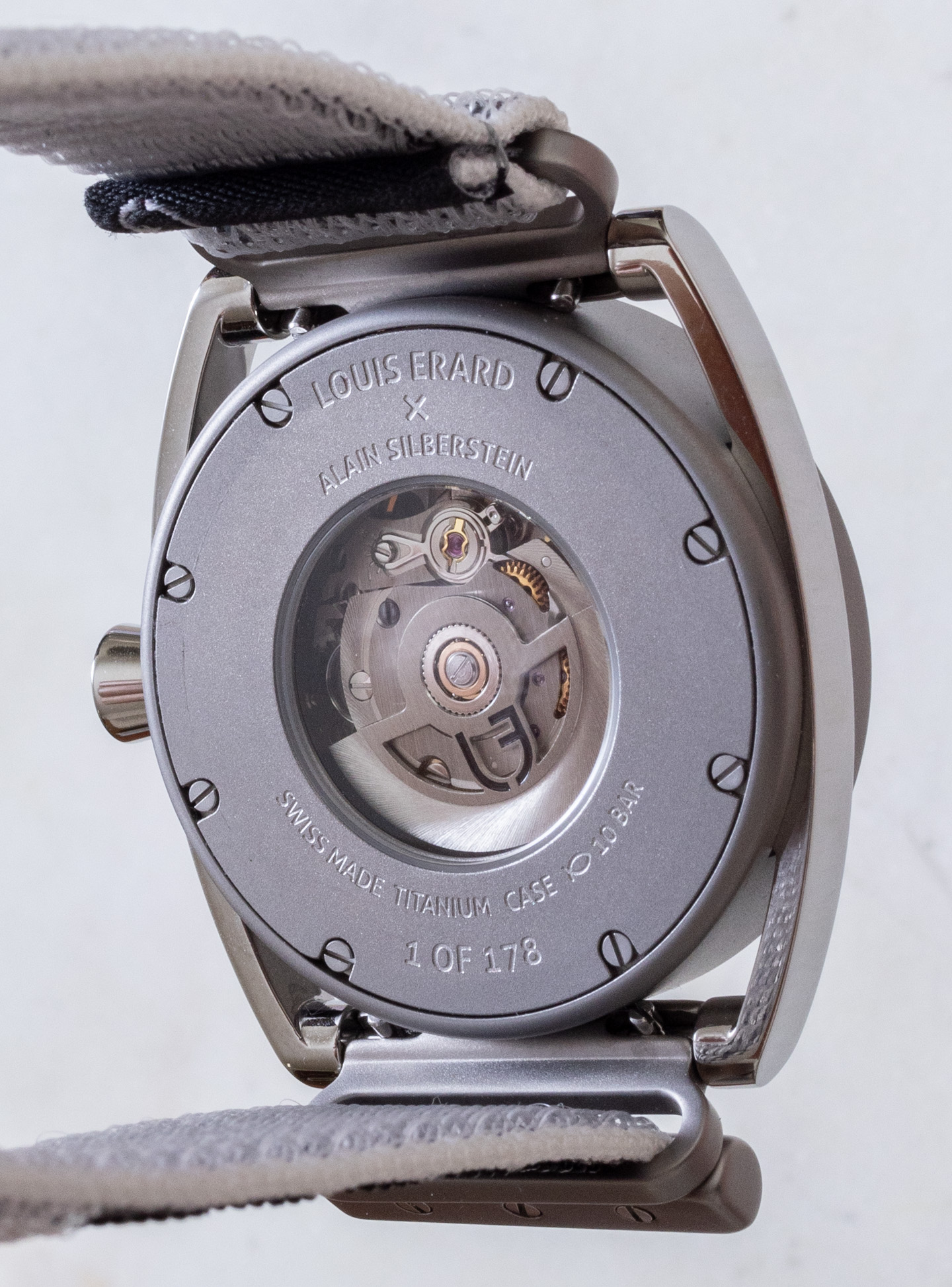 Speaking of odd naming conventions, Louis Erard has still not given this case style a name. It loosely exists in the larger Louis Erard Excellence collection, but that product family at the brand is feeling rather ambiguous at this point. I think the brand should not waste any time before giving this interesting case design a name prior to making too many new watches with it. The case wears at 42mm-wide and is about 12mm thick with a roughly 52mm lug-to-lug distance. (Louis Erard’s 40mm-wide measurement only includes the inner case and not the side flank structures.) It also has 100 meters of water resistance and a flat sapphire crystal over the dial, as well as over the movement on the rear of the case.

Louis Erard produces the case out of titanium. For the sandblasted inner case, the brand uses grade 2 titanium (which holds that finishing a bit better). The polished lug structures and crown are in polished grade 5 titanium. At the ends of the lugs are grade 2 titanium articulating strap attachments. These move in order to help the case fit more comfortably on this particular type of fabric strap system. The titanium strap ends can also be removed in order to fit a third-party standard straight strap onto the case that offers some nice future wearing options. That’s certainly true given the casual choice of strap. Louis Erard doesn’t hide the fact that the strap is inspired by one of the mesh fabric sport straps for the Apple Watch. It offers a bit less elasticity than that of the Apple Watch, but otherwise more or less looks the same, being a woven nylon blend of colors that folds over itself with a Velcro-style attachment. The end of the strap is a wider piece of titanium metal that prevents the end of the strap from becoming unthreaded from the titanium lug loop. It is a good system, and it is also nice that Louis Erard fits the structures with quick-release bars so that you can more easily swap out straps, if you choose. 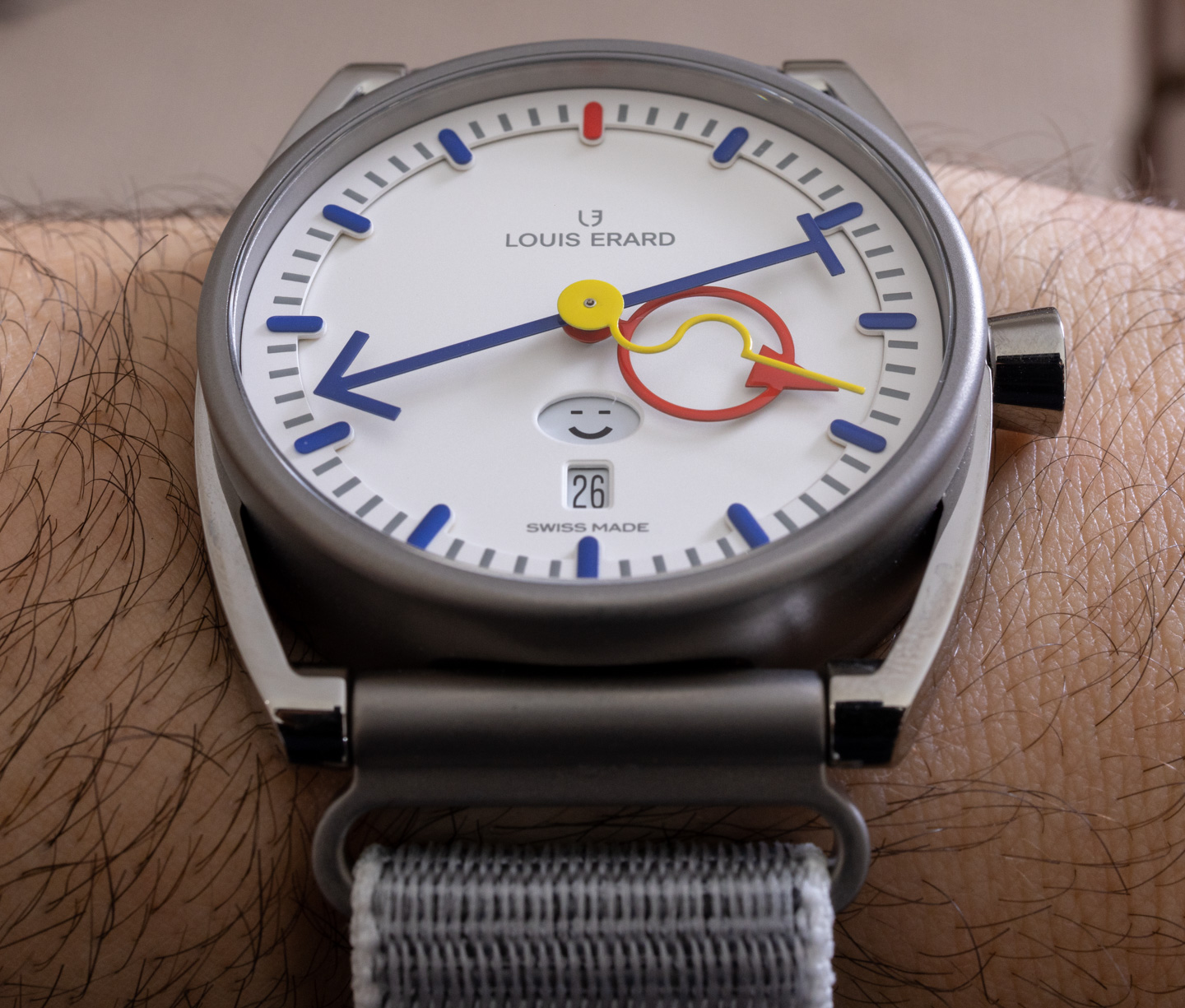 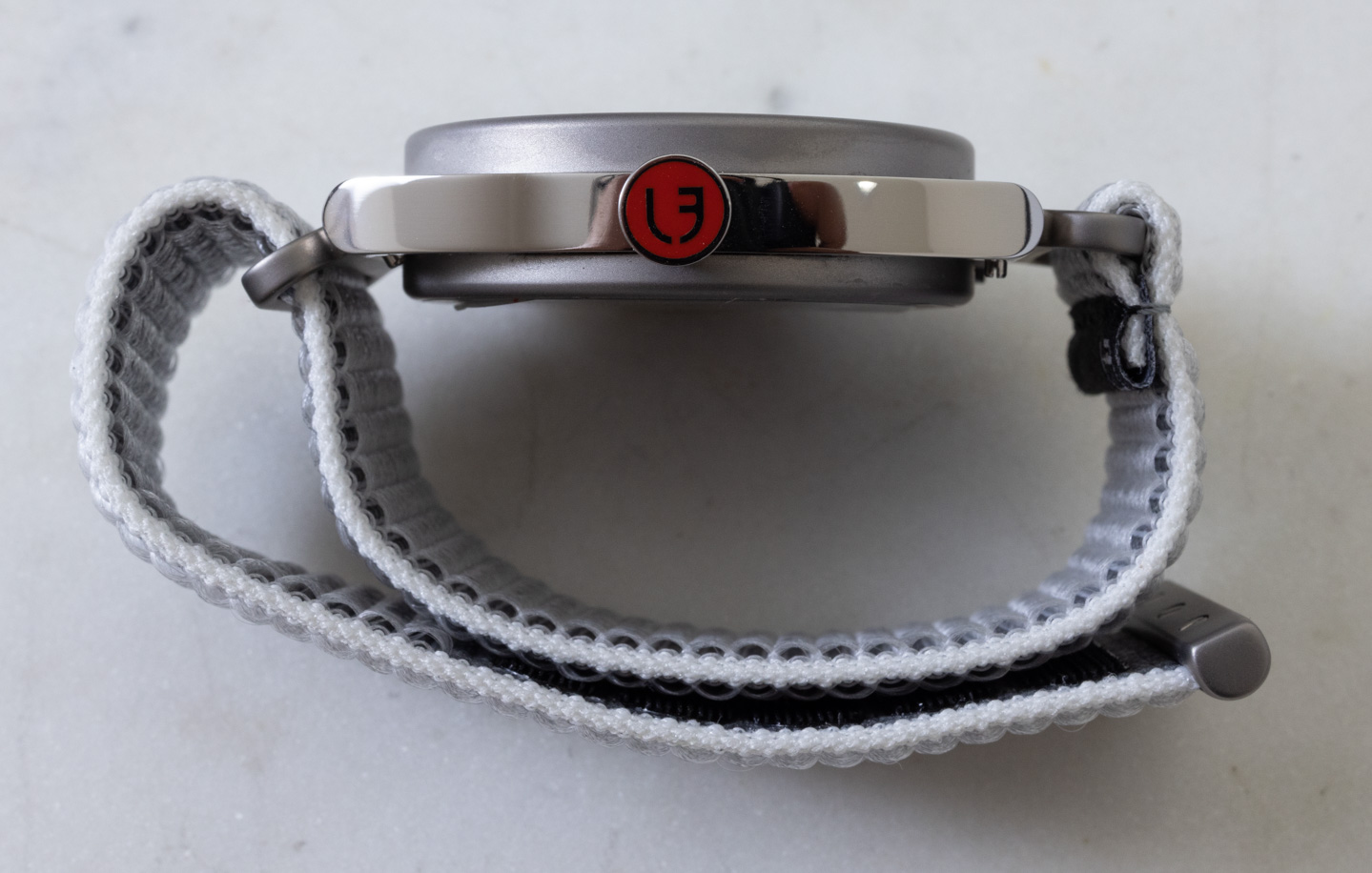 I like wearing this case a lot and appreciate the distinctive style, lighter-weight nature, and comfort. It wears large but is also appropriate for smaller wrists. One thing I am curious about is if the case would be nicer if the polished side flanks curved down a bit. As it is the structures are straight, and my eyes keep wanting to see them angle down to be close to your wrist. With that said, the “high” placement of the lug-ends is also due to the articulating strap loop segment that would otherwise touch your wrist more if the lug holes were much lower.

Inside the La Semaine Blanche Louis Erard x Alain Silberstein watch is a Swiss Made Sellita SW220-1 automatic movement. This is more or less the same as an ETA 2836, which is a three-hand automatic that offers a day/date complication. The movement operates at 4Hz with about 38 hours of power reserve. While the movement isn’t modified, the day of the week indicator has been re-imagined a bit. Note that this is not new for Alain Silberstein. The idea to repurpose the days of the week with different smiley emoticons is a concept employed by Silberstein in the 1990s and into the 2000s. The idea is that rather than days of the week, the disc has a series of facial expressions meant to suggest how you might feel on various days of the week to happy on the weekend to upset on Mondays. It is a very charming and French sort of humor. 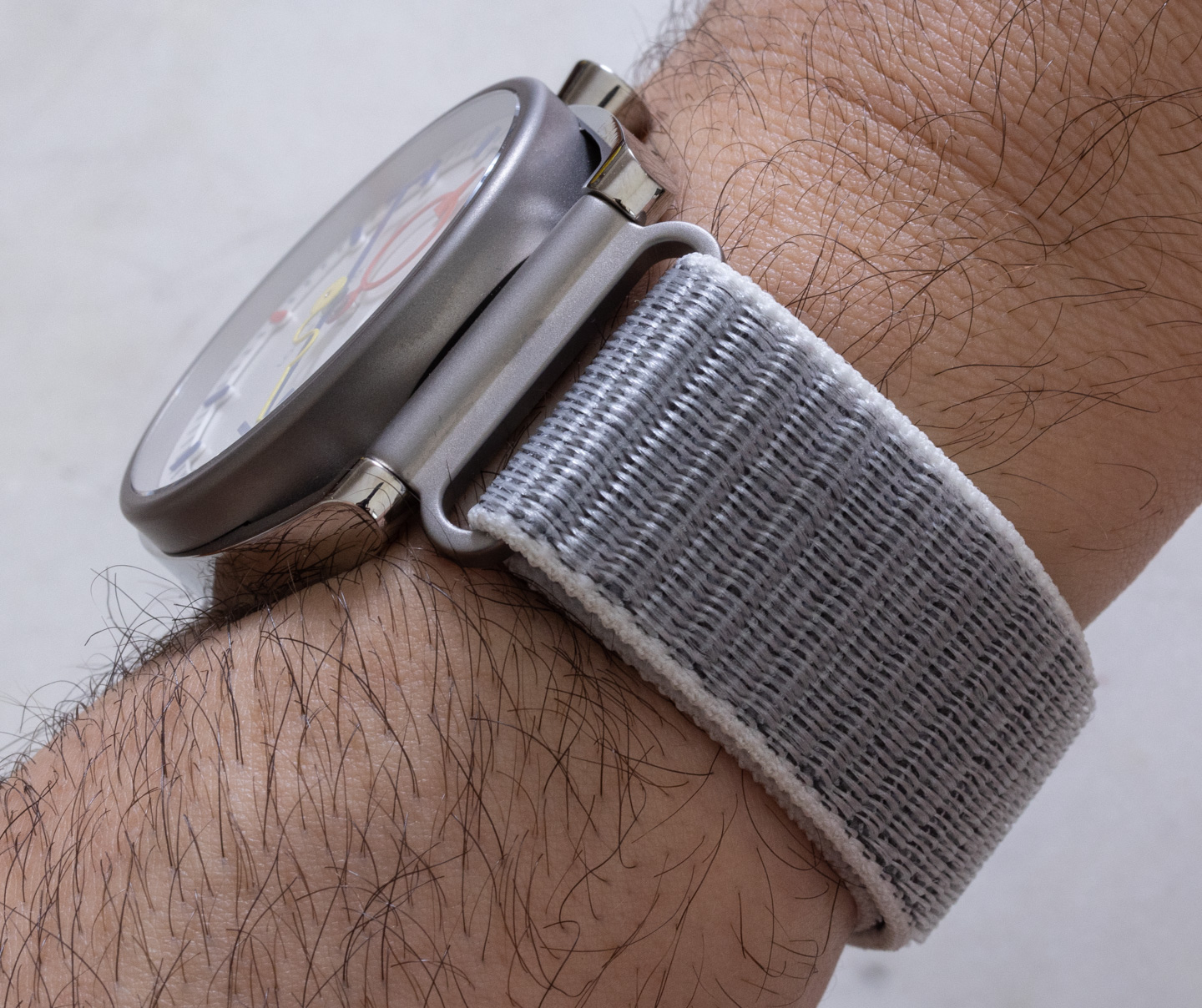 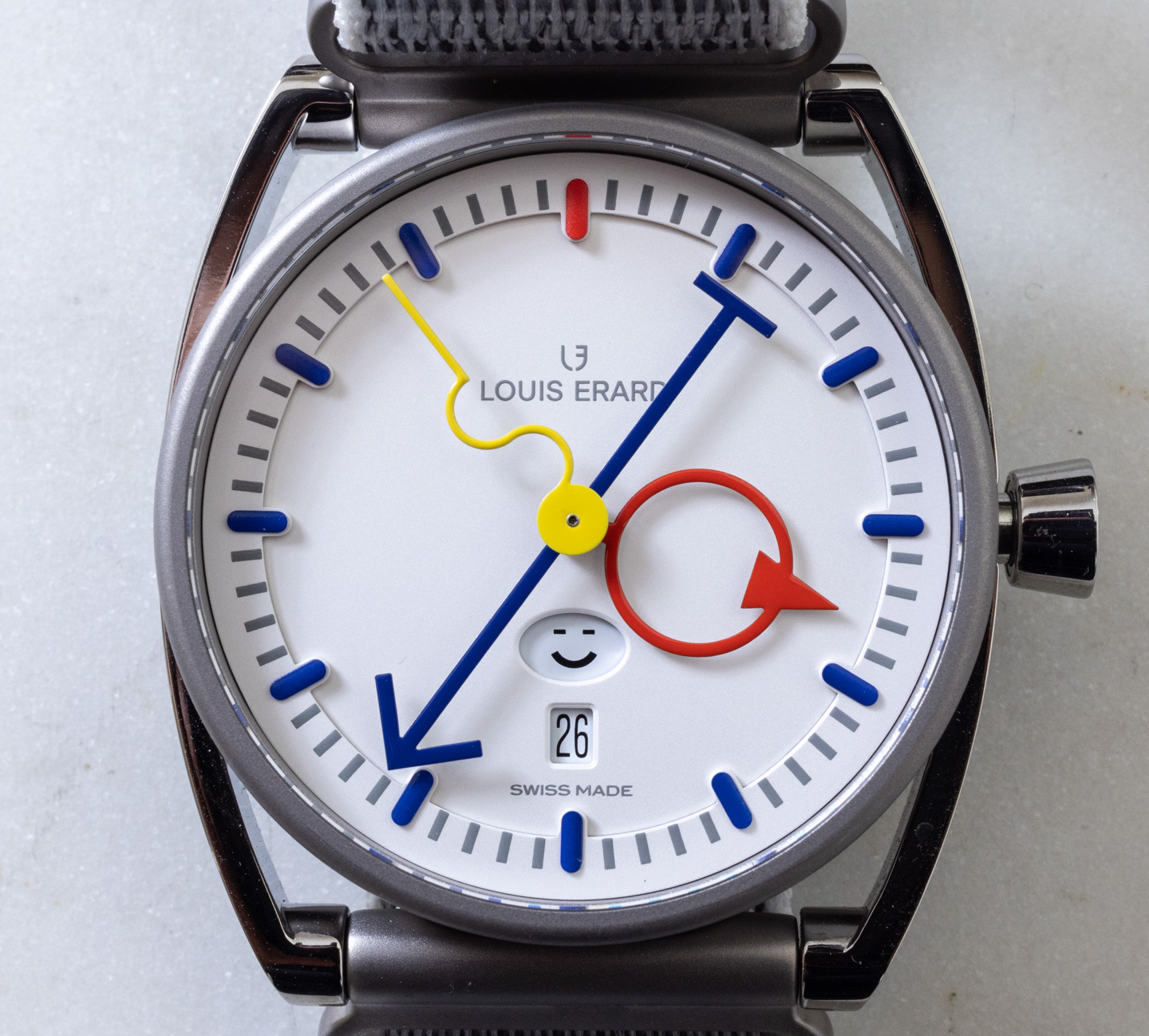 The rest of the dial is very much signature Alain Silberstein aesthetic in terms of the design of his now-signature hands, as well as the markers. To create a sense of depth, the hour markers are placed on an applied chapter ring, while for symmetry purposes, the day of the week and date indicator windows are stacked over each other at the 6 o’clock position on the dial. The hands are colored red, blue, and yellow, offering a colorful and playful personality to the overall design. In white, the legibility is very good, even if it reading the hands takes a bit of getting used to given their avant-garde shapes.

To match the colorful lacquered elements on the dial, the watch crown has a red lacquered section with the Louis Erard logo. What I think continues to be very smart about this collaboration is that the dial of the watch only has one brand name on it. Alain Silberstein gets his name on the back of the watch as well as in the name, but for consistency purposes I think it makes the most sense for the dial to only say “Louis Erard,” as it does. This is not a small point, and it goes to show that Louis Erard is certainly thinking about small details as they continue to develop their relationship with Mr. Silberstein and a growing list of collaborators. 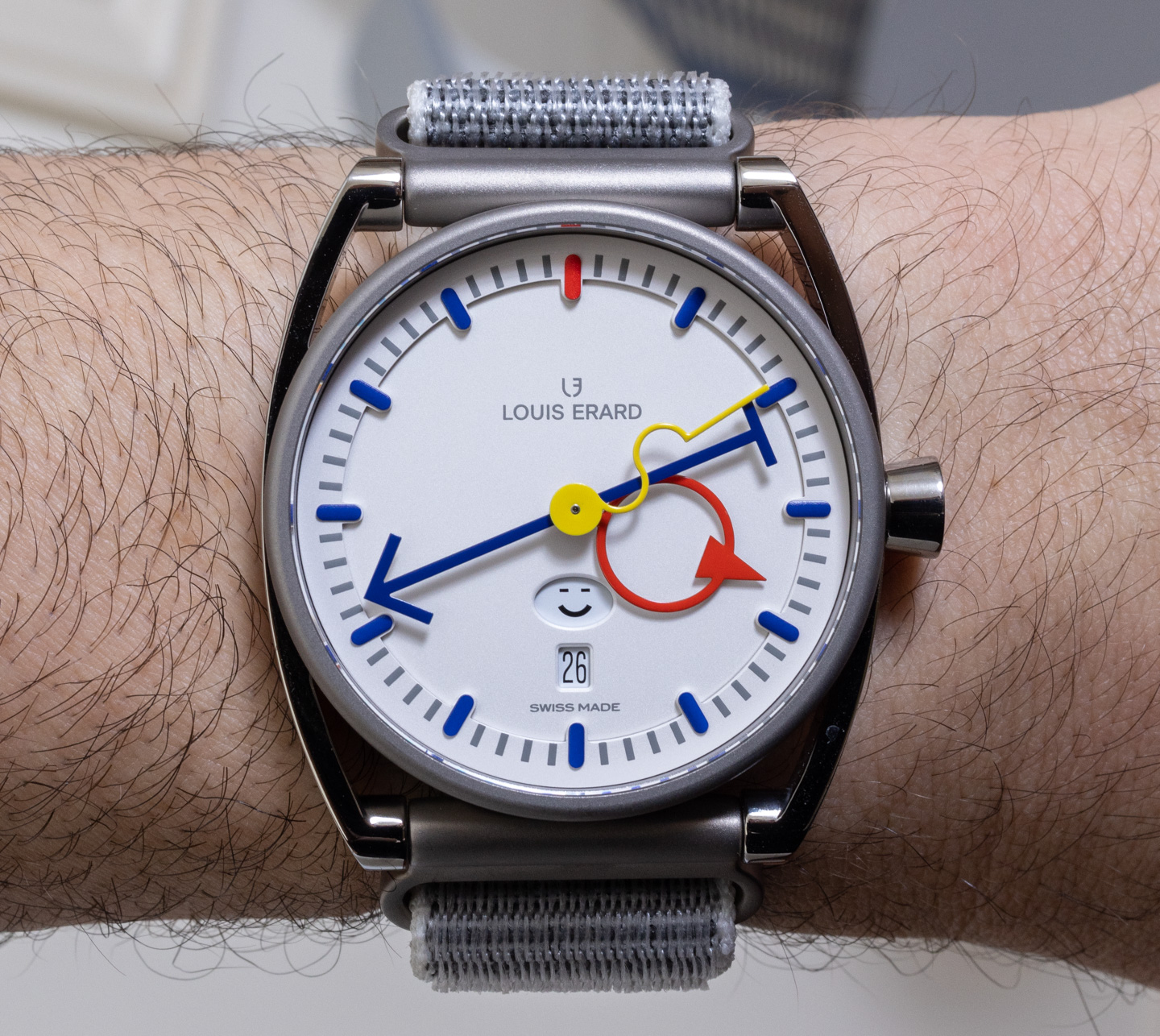 It will be interesting to see how the successful relationship between Louis Erard and Alain Silberstein continues to take shape. For now, all of the resulting watches appear to be limited editions. That makes sense, but I am also interested to see how the duo develops the relationship and if more core collection models arise from the relationship. I also hope this collection gets a name for the case; that would help furnish it with even more personality. Limited to 178 pieces, the reference 75357TT01.BTT83 La Semaine Blanche Louis Erard x Alain Silberstein watch has a retail price of 4,000 Swiss Francs. Learn more at the Louis Erard website here.